How to Savour a Forest: Gratitude for the Abundance of Nagarhole National Park

A treasure trove of biodiversity, Nagarhole has much to offer beyond the tiger 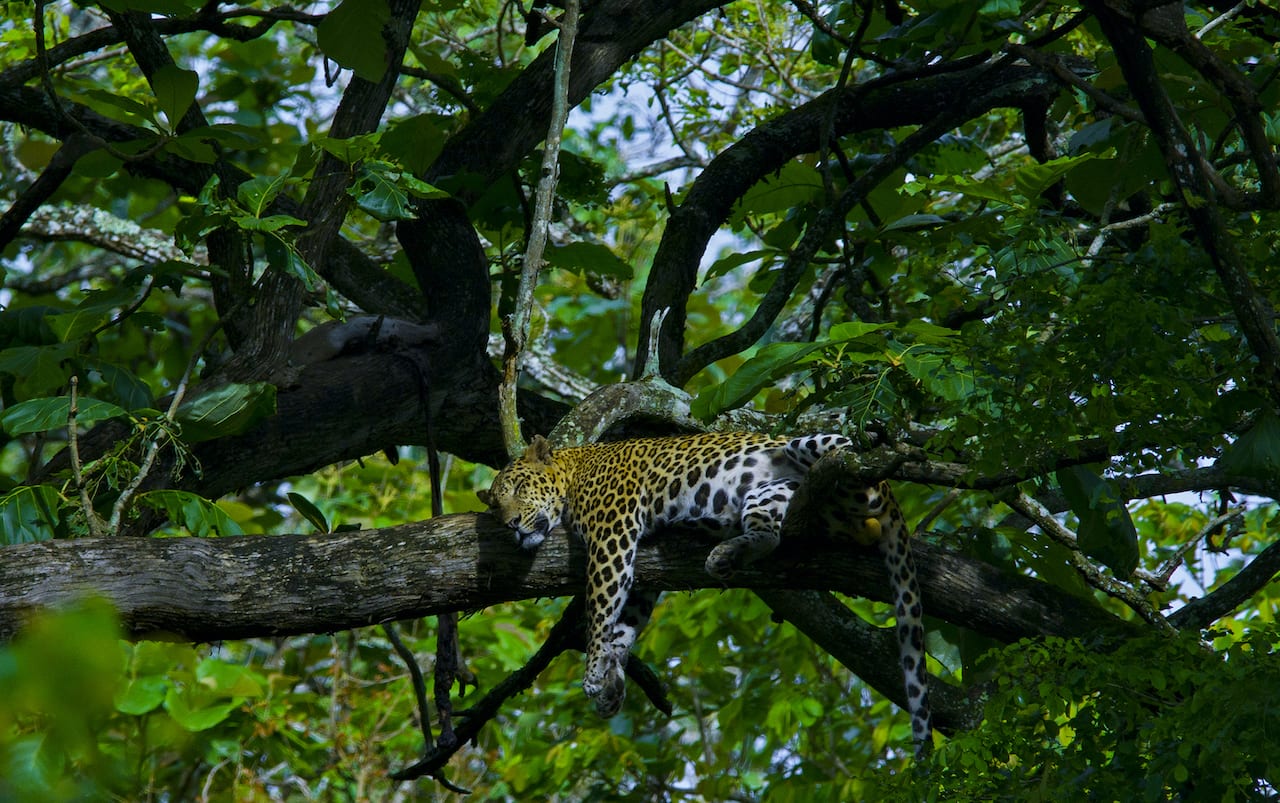 On a chilly December morning, the kind that makes you want to slumber in a cocoon of blankets, I jauntily sprang out of bed to a piercing beep-beep-beep from my phone. I was on the banks of the Kabini reservoir on the southeastern fringes of the famed Nagarhole National Park in Karnataka, erstwhile private game reserve of the Maharajas of Mysuru.

A short while later, I settled into an olive-green safari jeep with four tiger-gripped photography enthusiasts, excited to be venturing into one of India’s foremost tiger reserves. The pursuit of tigers within national parks is the hallmark of most jungle safaris across the country and I was about to get swept up in one such quest.

As we drove through the park, we sighted happy herds of spotted deer, and a few wild boars in the thicket every now and then ⁠— both part of the tiger’s diet. Glossy-feathered jungle fowl and pea fowl pecked at the forest ground for juicy titbits while langurs with coal-black faces and silver fur watched us from their perches. Then the jeep stopped, a hush fell over the forest, and just as I was beginning to savour the silence, the clickety-clack of shutters ensued. High up on a tree was a crested serpent eagle, its piercing yellow gaze fixed somewhere in the distant horizon. 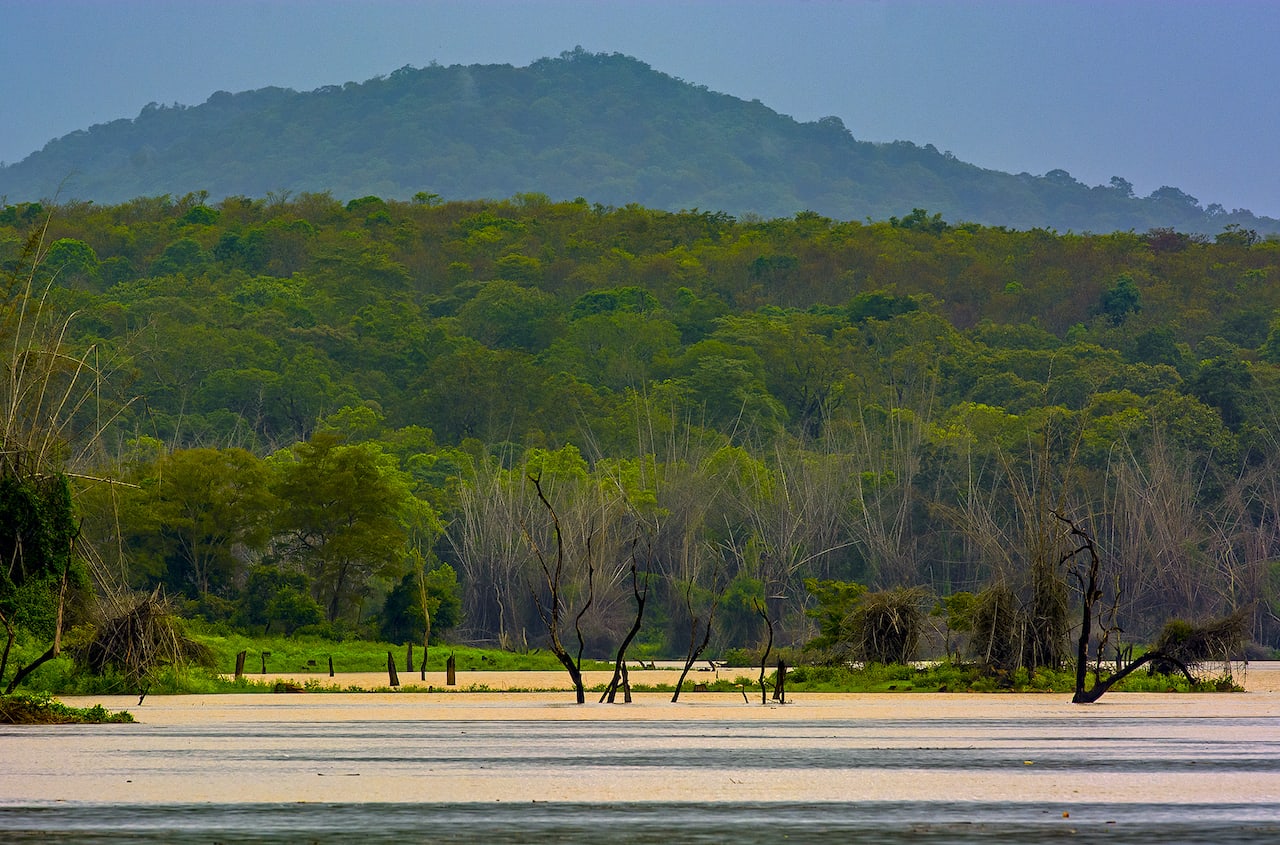 Dense forest and gurgling streams fill the Nagarhole landscape with life. Large parcels of land were submerged when the Kabini river — a major tributary of the Cauvery — was dammed in 1974 for an irrigation project. Nagarhole’s blend of moist and dry deciduous forest is spread across 847 sq km, with a healthy population of wildlife including tigers, dholes, sloth bears, and leopards.

The rest of the ride was a blur, suffused with the unstated urgency to sight a tiger. I was just as happy though, watching a ruddy mongoose, a stork-billed kingfisher, gazing at forest trees with interesting bark patterns and lofty canopies, and soaking in the mystery of a quaint stone temple in the middle of the forest.

We wound up the morning safari with sightings of two large herbivores: a herd of gaur, and a lone tusker that turned his posterior towards us before doing a slow, 180-degree turn to reveal his glorious front.

Nagarhole has about 1,400-1,700 elephants and, along with Bandipur Tiger Reserve, forms one end of a 7,200-hectare elephant migratory corridor stretching across the Nilgiri Biosphere Reserve.

The abundance of grass along the Kabini reservoir attracts herds of elephant (top) and gaur (above) to the park. Gaurs are mostly active during the night. They start grazing around dusk, and continue chomping on shoots, leaves, and grass until dawn breaks.

For my next safari, I specifically requested a tour of forest trees, and was bundled in a jeep with Bheemiah, a naturalist with a cheerful voice and deep knowledge of the trees in these forests. Along the way, we saw a solitary racket-tailed drongo perched meditatively on a branch, a changeable hawk-eagle rested among the boughs of another tree, and white-throated kingfishers perched around watering holes.

A fascinating world unravelled as I made my acquaintance with the reserve’s tree species, each with distinct ecological and cultural linkages. These forests are abundant in dhanvana trees (Grewia tiliaefolia), favoured by elephants for their juicy bark and prized for their antipyretic properties in Ayurveda. I also saw yellow teak trees (Haldina cordifolia) the wood of which is used to make the famed lacquer toys of Channapattana, and the Indian kino (Pterocarpus marsupium), which helps control diabetes. Dindalu, the axle wood tree (Anogeissus latifolia), another common species found here, is harvested for its gum and tannins, and is used locally to treat snake bites and scorpion stings. Other parts of the forest were overgrown with lantana and Eupatorium odoratum, both invasive species. 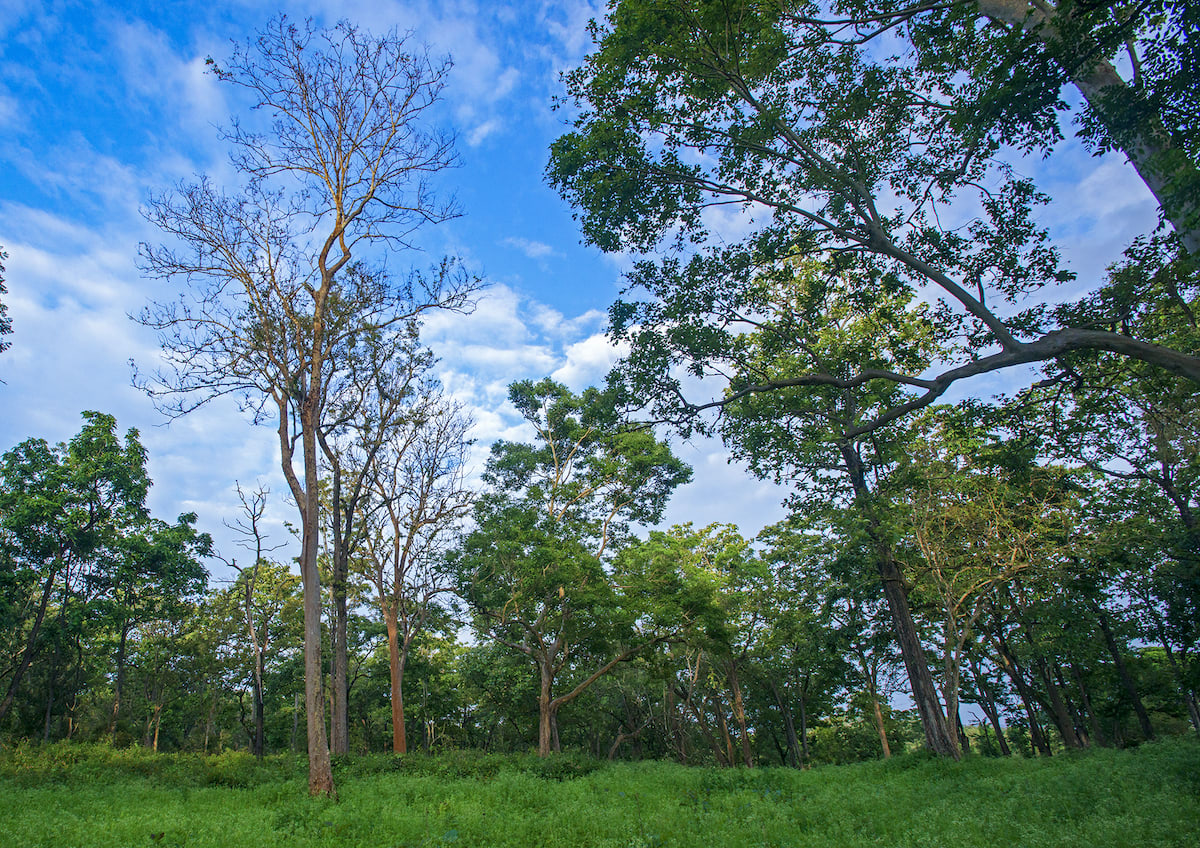 The crocodile bark tree (Terminalia tomentosa), with its deeply fissured bark resembling a crocodile’s skin is ubiquitous in Nagarhole, much like the mugger crocodiles that inhabit the adjoining Kabini reservoir. One can also see red sanders (Pterocarpus santalinus) or rakthachandana, known to possess medicinal attributes and classified “Endangered” by the IUCN.

The spotted deer is one of the park’s most common residents with large herds seen trotting across the park. The male typically has branching, three-tined antlers that can grow up to one metre in length.

We also sighted a sloth bear near a junction, mulling its next move as it watched us approach. Sloth bears are notoriously shy creatures, and this one lumbered away into the thicket in a matter of seconds. As twilight approached, the golden sunlight that streamed through the canopy, gave way to shadows. We made our way out before the forest gates closed at 6 pm.

Early the next morning, I opted for the boat safari on the Kabini, the rippling capacious boundary between Nagarhole and Bandipur Tiger Reserves. The reservoir sustains an assortment of life forms in its waters and along its shores, and is a critical lifeline for the human populace too. Near the gate of the reserve, there was a big contingent of safari jeeps and canters headed into the forest, but ours was the only boat that ventured out, and it was filled to just half its capacity. Likely because winter mornings on the Kabini are misty and not considered ideal for sightings. 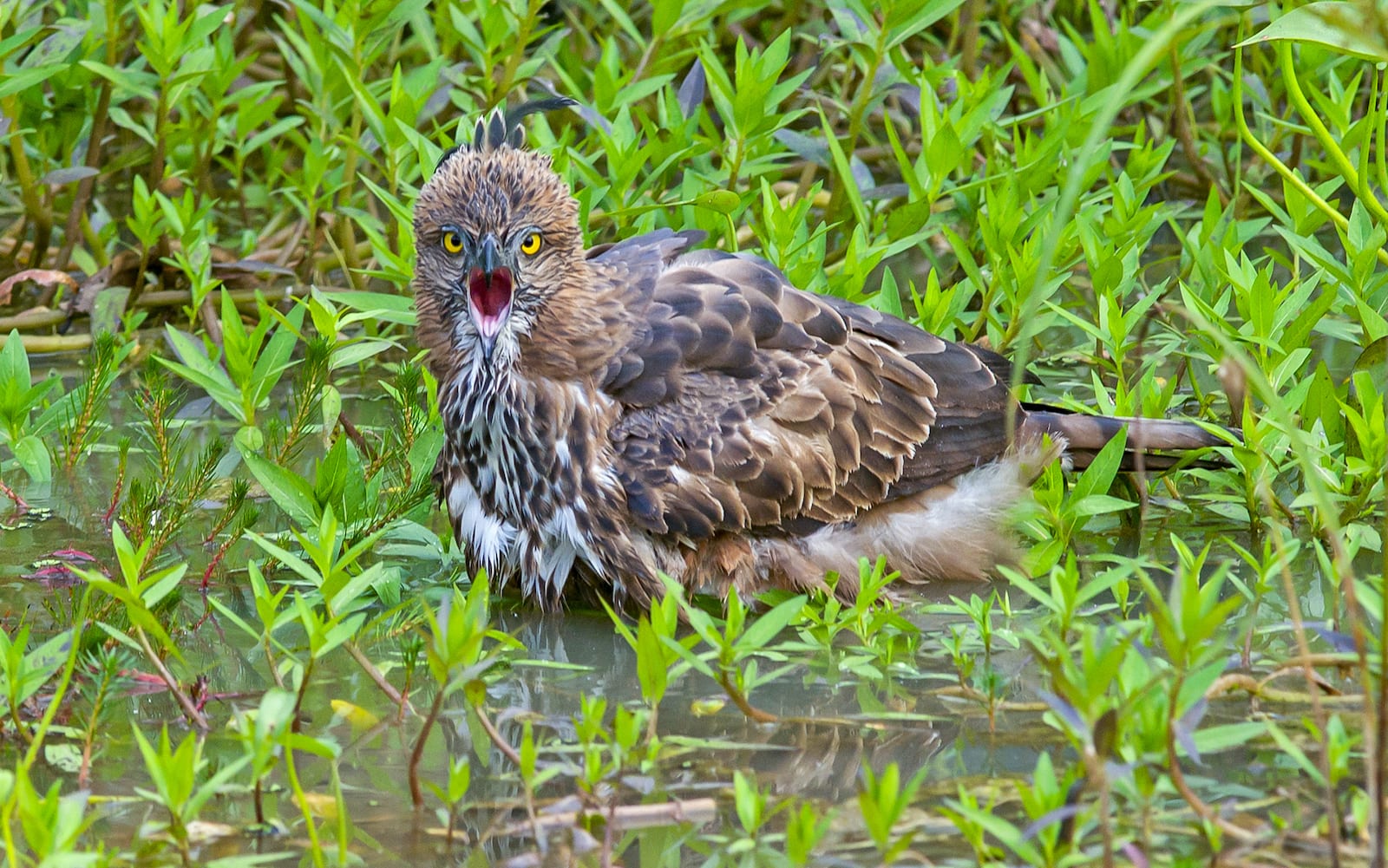 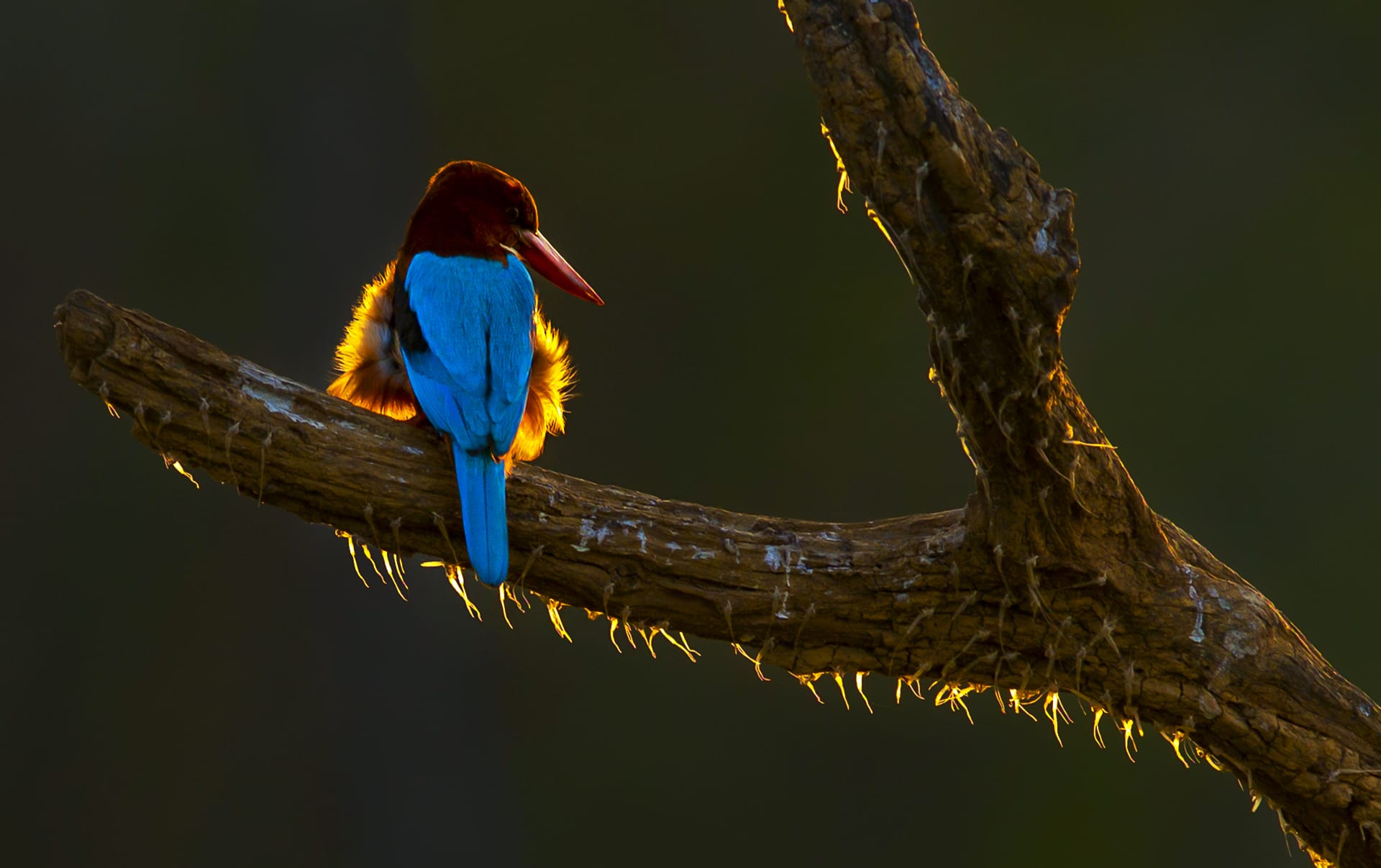 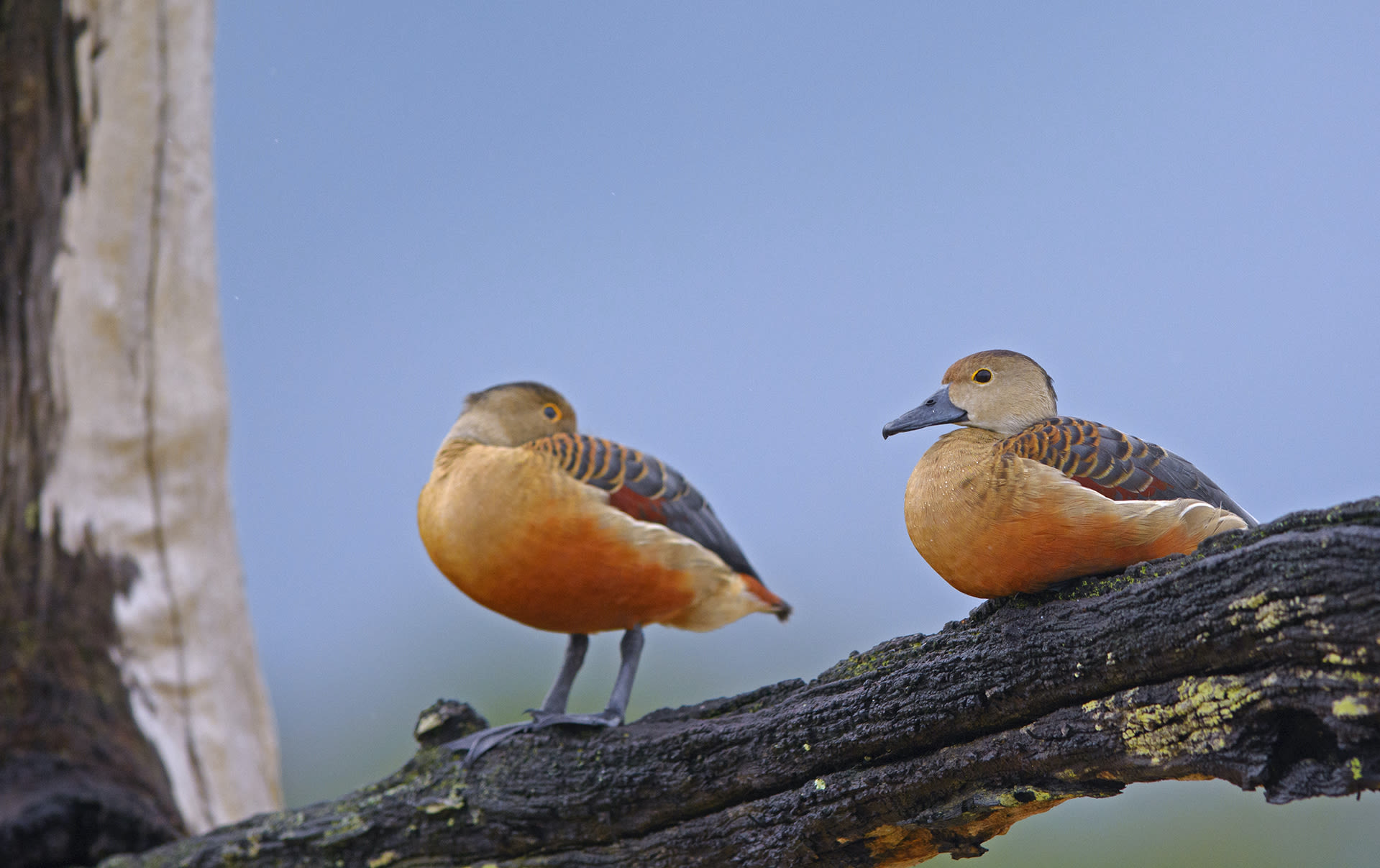 Nagarhole has a diverse landscape that attracts a wide variety of birds. The park has over 200 avian species including the changeable hawk eagle (top), white-throated kingfisher (above left), and lesser whistling duck (above right).

We saw plenty of kingfishers and learned about the prevalence of four types in this region: the white-throated, pied, stork-billed, and little blue kingfisher. A pair of smooth-coated otters frolicked in the reservoir, nesting cormorants and darters perched on dead tree stumps in the water, while egrets, sand pipers, and black-headed ibis waded in the shallows. Overhead, river terns, brahminy kites, and ospreys reigned over the skies, while a stripe-necked mongoose moved about on the banks. Further ahead, a large mugger crocodile, basked at the water’s edge.

The banks of the Kabini offer a grand spectacle in the summer as well. The river recedes during the dry season, and its shores morph into a lush carpet of grass forming a meeting ground for elephants. This annual gathering of over 1,000-odd pachyderms in the forests of Nagarhole has gained eminence as the largest congregation of Asian elephants in the world.

Adult wild boars are recognised by the dark mane that runs from their head to their tail. In Nagarhole wild boars are both prey and predator, and play a critical role in the food chain.

Estimates say that Nagarhole has about 110 adult tigers. Yet, spotting the big cat is always a matter of chance.

Presently, our naturalist received a tip-off. Our boat sped away and before long, we spotted a handsome male tiger pacing the banks of the Kabini, barely 100 feet away. It was 8 am and the morning sun burnished the tiger’s coat to appear a flaming orange with black stripes. Nothing seemed to exist beyond the powerful, 200-kilo Bengal tiger, who held us captive with his every move and gesture.

He stood at the water’s edge for a while with a faraway gaze — a king surveying his land. He then walked towards a dry tree stump and stood up on his hind legs as if to sharpen his claws. On display next was the “flehmen response” in animal behaviour: he wrinkled his nose and drew back his lips to reveal his deadly canines as he sniffed out potential contenders to his territory. Eventually, the tiger slid his hind quarters into the water and lay there, partially submerged, occasionally lapping the water, and licking a gash on his right elbow. The water was flecked with streaks of orange from his reflection. After what seemed like an eternity he rose like a blazing phoenix, and moseyed over towards the thicket.

My co-passengers appeared to be in a reflective mood on the boat ride back. I for one was grateful for the tiger, the otters, the woolly necked stork, the mongoose, and the abundance that was Nagarhole.

The next time you are in a forest, savour all creatures, “great and small, bright and beautiful, and wise and wonderful”, as the British writer and veterinary surgeon James Herriot lovingly wrote, and a forest will never cease to amaze you even if the tiger stays off the safari circuit. 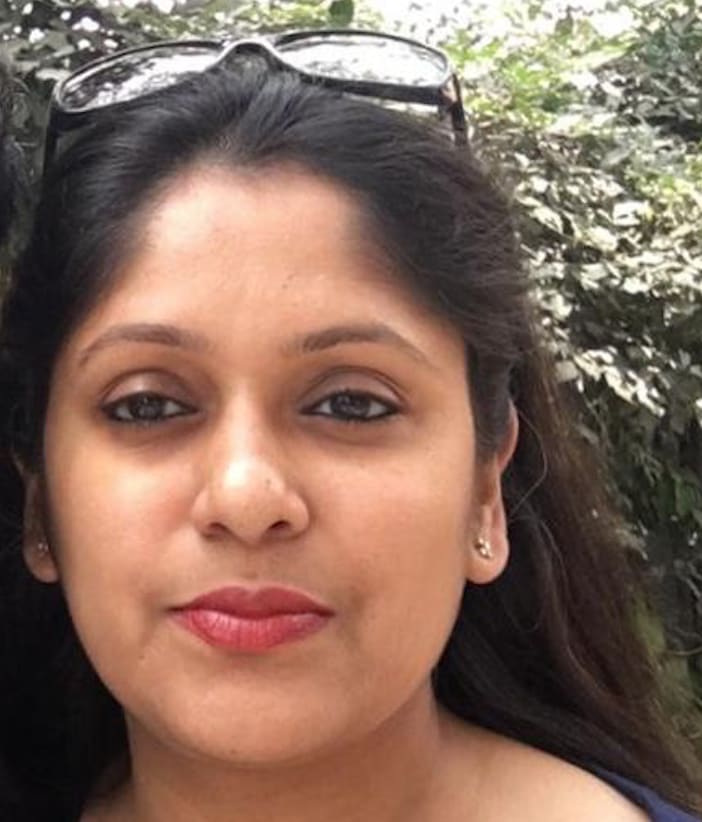 is an environmental engineer turned software marketer, natural farmer and a nature nut. She blogs at www.bluejaydiaries.com.

is one of India's most prolific wildlife and conservation photographers. His work has been featured in leading publications. He is also a RoundGlass Ambassador, and an RBS Earth Hero awardee