Pallikaranai Marshland: An Urban Wetland on the Brink

Besides hosting over 5,OOO resident birds, Chennai’s Pallikaranai marshland is a stopover point for over 4O,OOO migratory birds. It desperately needs to be saved from encroaching toxic waste 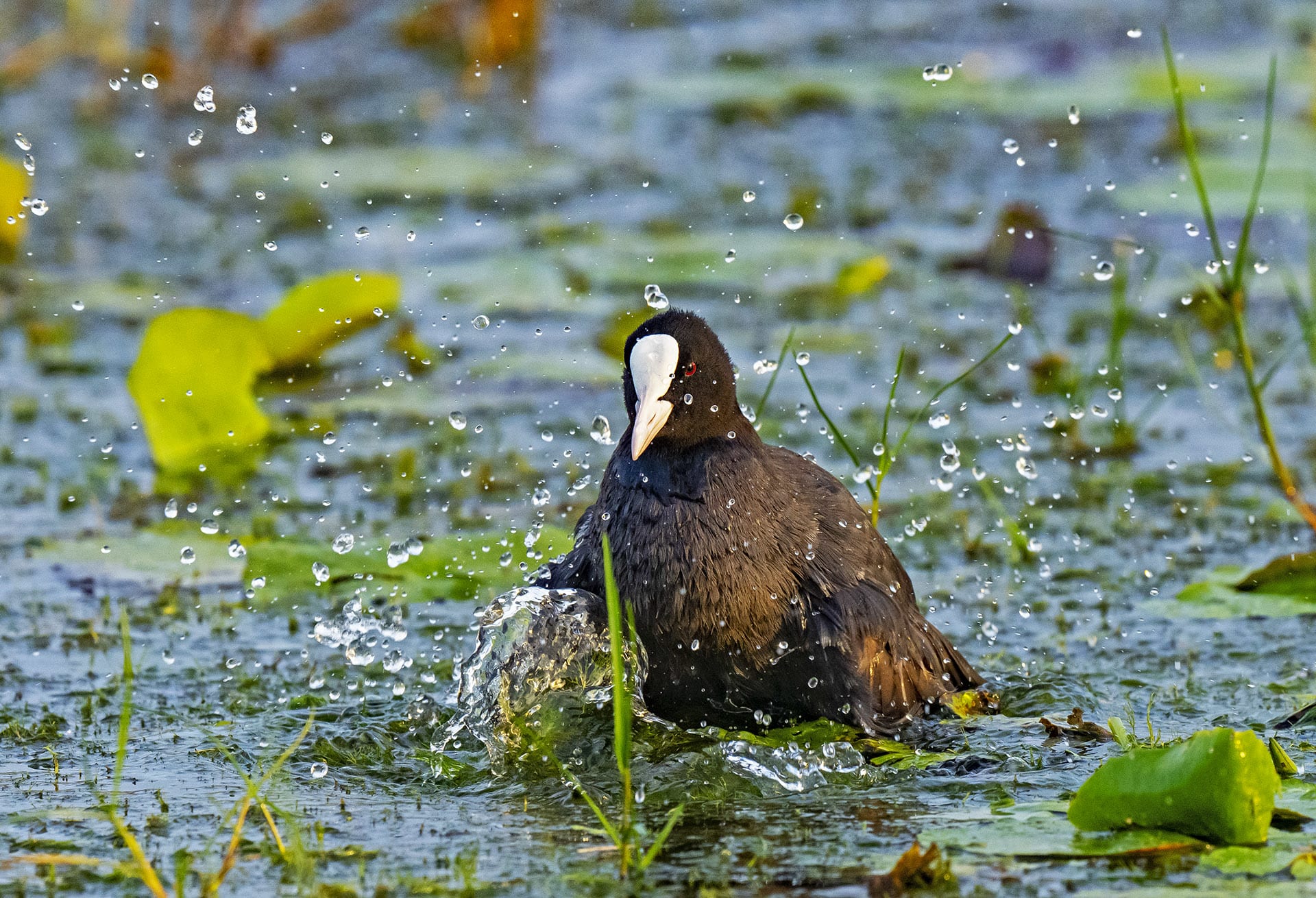 The grass rustled suddenly about four feet from where I stood. I watched in surprise as a glistening, button-sized pink nose nudged aside the greenery on the marsh bund. Then the ball of rust-grey fur spotted me, shot out of the undergrowth, and scampered away. From a safe distance, the creature studied me and my fellow birding enthusiasts for a few seconds more, its fur glinting in the early morning sun. Was it a ruddy mongoose? I wondered. ­­­

The juxtaposition was unreal. We were standing on the busy 200 Feet Radial Road that cuts across the Pallikaranai marshland, Chennai’s last urban wetland. On the other side of the road loomed mountains of garbage, an overflow of the Perungudi dump yard, its stench permeating the air. Our binoculars however were trained on the mudflats in front of us. 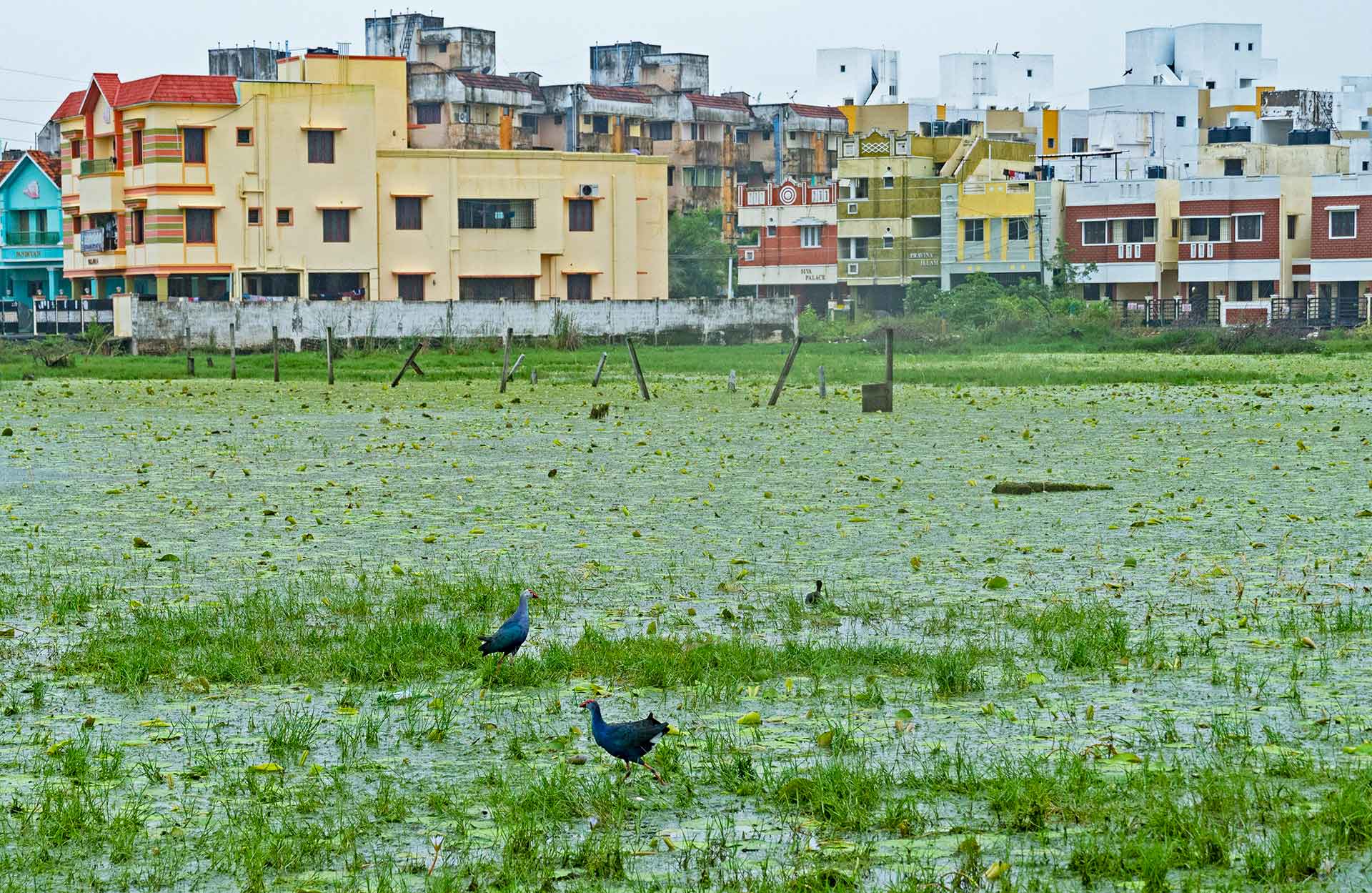 Purple swamphens are a common sight at Pallikaranai marshland, and these flamboyant waterbirds and their antics are a joy to watch. Cover photo: A common coot enjoys a splash in Pallikaranai.

We had spent the earlier part of the morning watching resident birds on the edge of the busy highway — little cormorants darting around in the water, spot-billed pelicans leisurely fishing for breakfast, Indian spot-billed ducks and black-headed ibis flying over our heads in twos and threes. At the water’s edge, stately purple herons stalked their prey, in stark contrast to the antics of the flamboyant purple swamphens. In the distance, beyond the compound wall of the National Institute of Ocean Technology, a solitary painted stork perched amidst a gaggle of nesting pelicans in the trees.

My attention was called to a tiny bird balancing daintily on a reed. We were on an early morning birding walk led by Dr RJ Ranjit Daniels of Care Earth Trust, a Chennai-based biodiversity research organisation. Dr Daniels identified the bird as a brown shrike (Lanius cristatus), a winter migrant that flies several thousand kilometres from its breeding grounds in Siberia, making its way across the breadth of the Asian continent, to reach warmer feeding grounds in India and other parts of South Asia. Easily identified by the distinctive black band across their eyes, these diminutive birds begin arriving in India in August or September and return by April. 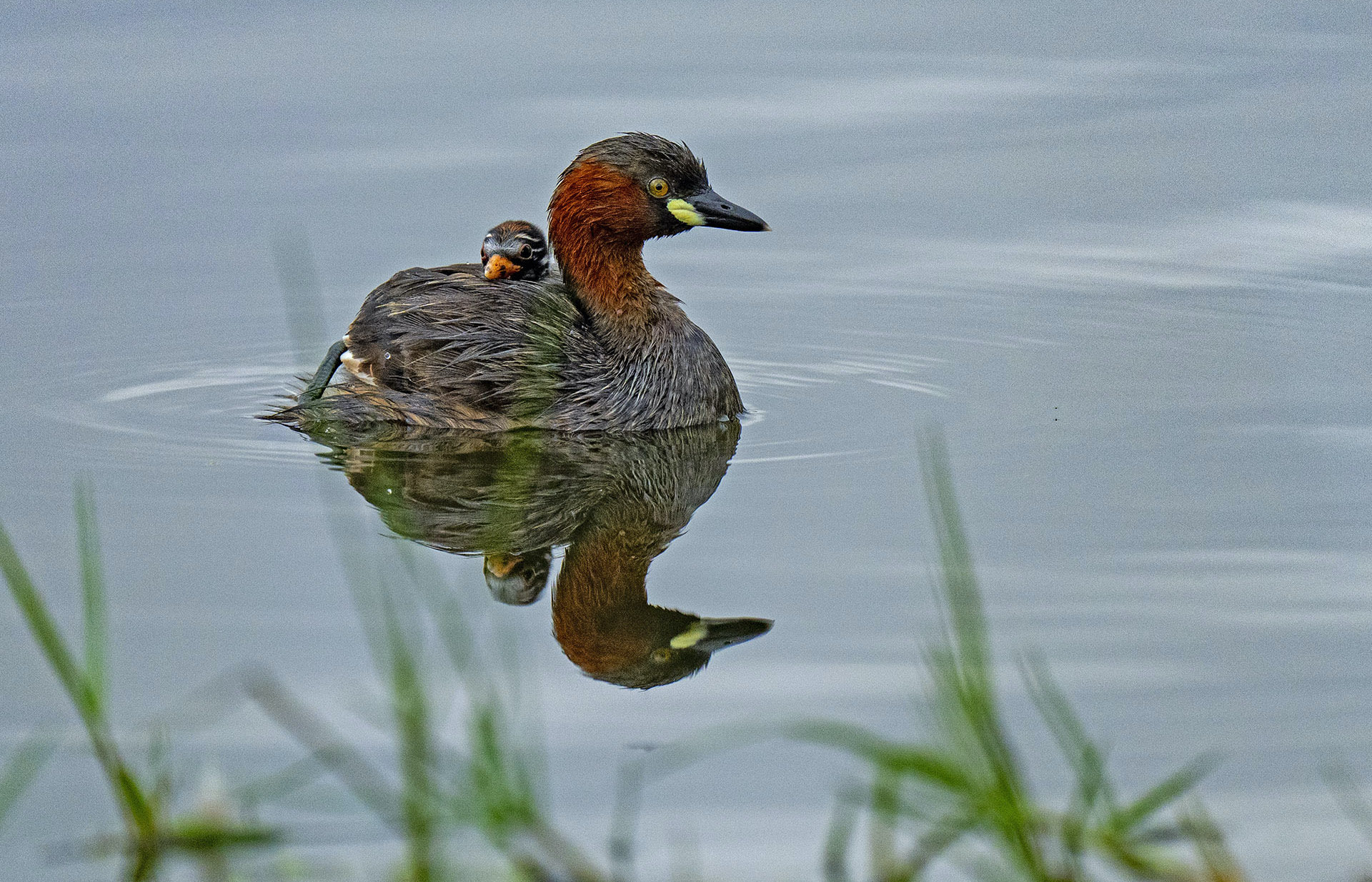 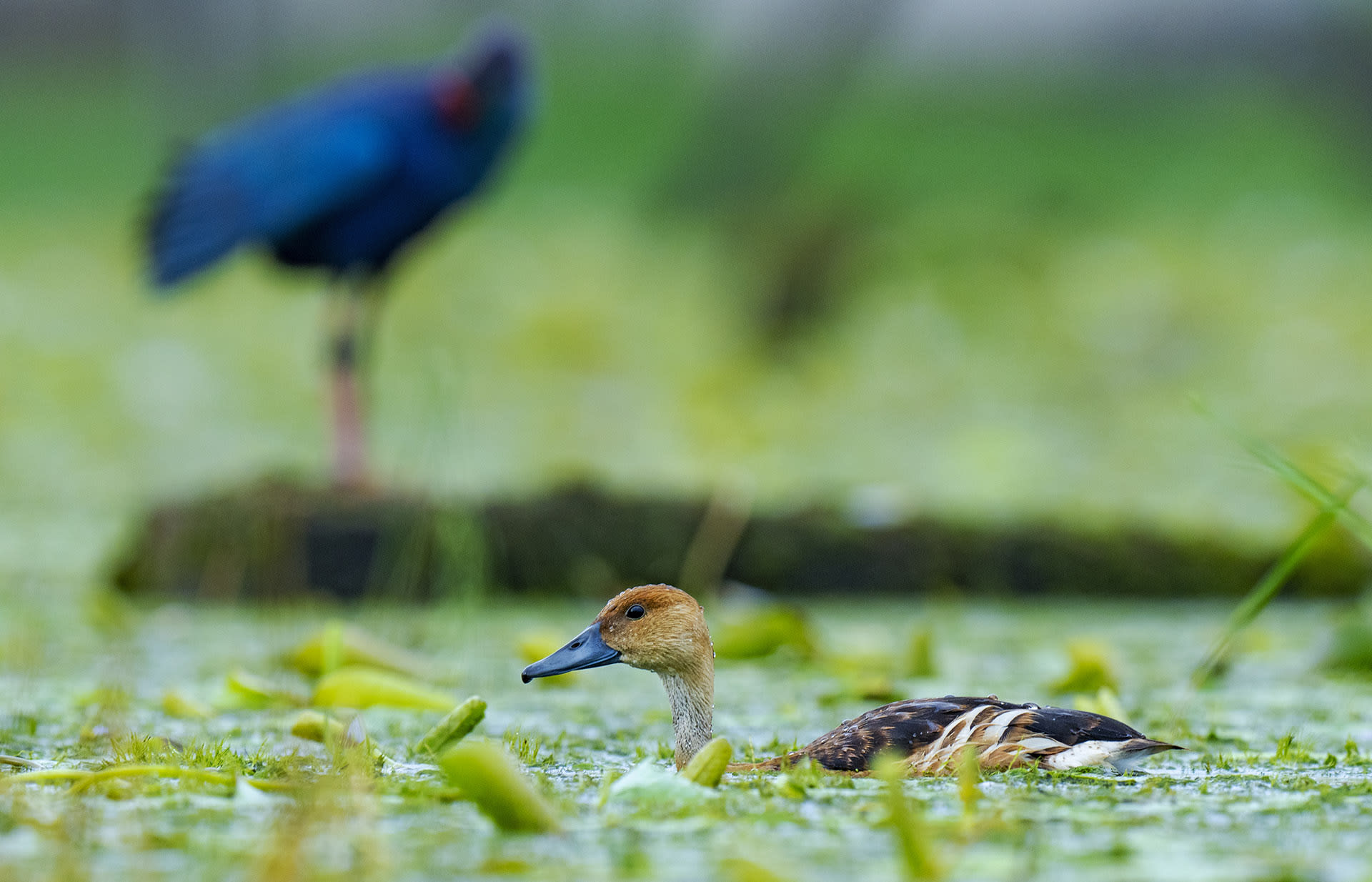 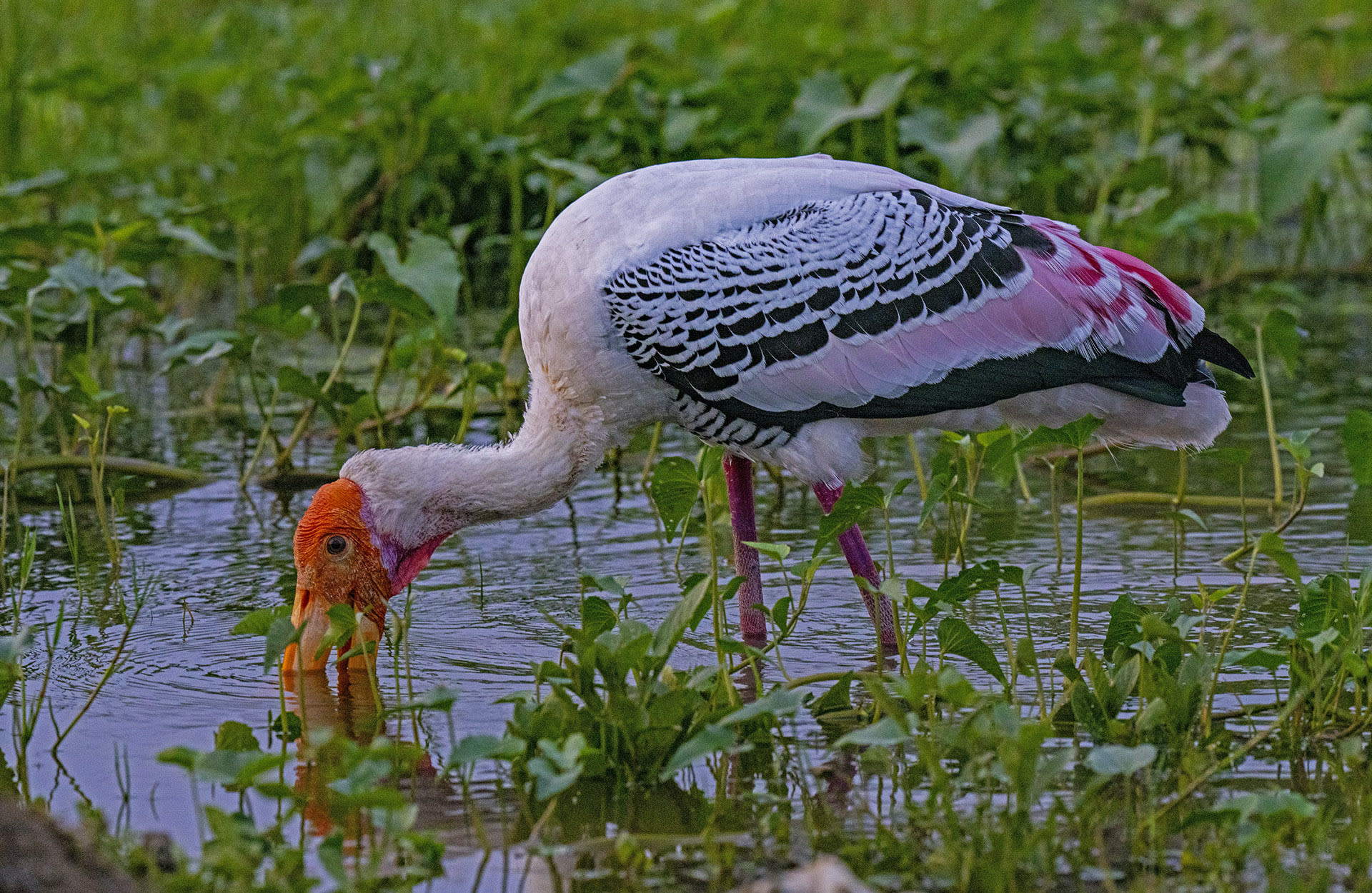 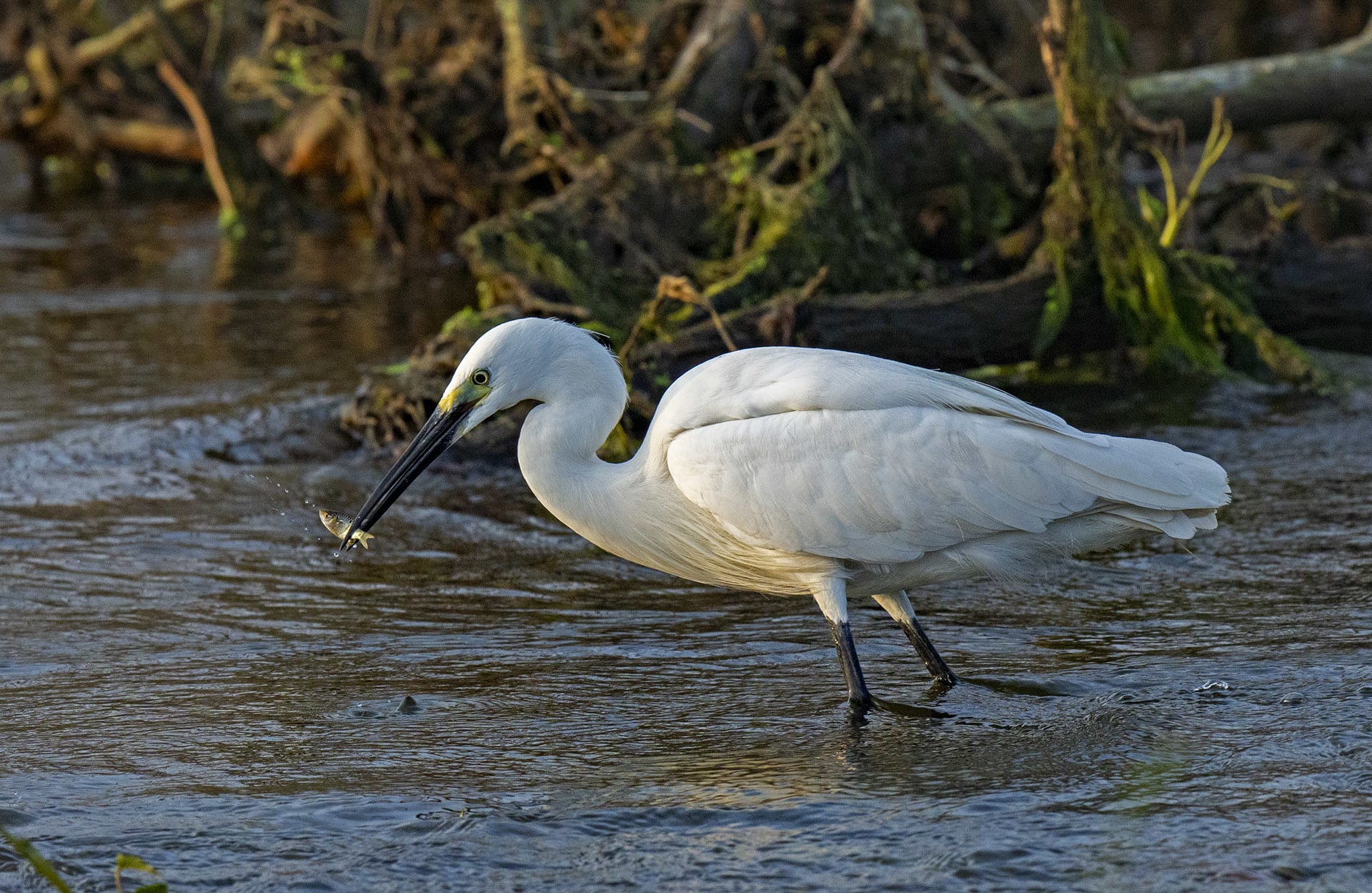 This struggling urban habitat still manages to provide shelter to over 5000 resident birds and over 4O,OOO migratory birds. Waterbirds like the little grebe (top left), lesser whistling duck (top right), painted storks (above left), and egrets are just a few of the birds a lucky visitor might spot.

Thanks to recent research using radio tagging, scientists have identified major flyways that migratory birds use annually. We now have detailed information on their routes, feeding, breeding, and resting sites. One such important migratory flight path is the Central Asian Flyway, on which India is a core country. Serving as a feeding site for several migratory species, the Pallikaranai marshland has been identified as one of eleven wetland areas in Tamil Nadu that fall on this route.

Categorised as ‘wasteland’ till a few years ago, the story of the Pallikaranai marsh parallels the tale of ‘wastelands’ across India. A holdover from the colonial period, this term was assigned to uncultivable land that therefore did not provide revenue, and was often declared state property. The wetland covered 50 sq km in 1965 but has eroded and degraded gradually, shrinking to just 6 sq km in 2013. The Perungudi dump yard on one side has extended into the marshland and continues to leach toxins into the marsh ecosystem. The marshland has also been decimated by development, encroachment, illegal dumping of solid waste, and untreated sewage.

The increase of faunal life subsequent to conservation efforts indicates that the fraught marshland is capable of sustaining a variety of wildlife. However, the long arm of the Perungudi dump yard continues to inch onto the marshland, contaminating the marsh ecosystem (above).

In 2002, in a critical step towards wetland protection, the Tamil Nadu Pollution Control Board supported a study that inventoried species diversity of the area: 274 species of flora and fauna were recorded within the Pallikaranai marsh, of which 106 were bird species. The study also recorded the marshland’s plant diversity, noting the presence of the endemic Bermuda grass (Cynodon barberi) and Flinders grass (Iseilema anthephoroides). Following a public interest litigation filed by residents, the Madras High Court directed the Chennai Corporation to cease dumping of waste there and establish an integrated waste management facility. Finally, in 2007, the state government declared 3.17 sq km of the marshland as reserved forest.

The combined efforts of citizens, the Forest Department, the Pallikaranai Conservation Authority, and environmental organisations have bolstered the marsh habitat. Construction debris and waste have been removed in parts. Fencing has been initiated, there is increased vigilance against poaching, and efforts at habitat restoration are on. Further south, Perumbakkam Lake was added to the Pallikaranai watershed area in 2014, and it is less polluted than the mudflats.

Sites like Pallikaranai marsh are also of strategic importance for another reason. Towards the end of their long migration, exhausted migratory birds have few options for touchdown at the southern tip of the continent, with miles of ocean beyond Tamil Nadu and Sri Lanka. Migratory birds, including greater flamingos, have been arriving at Pallikaranai in increasing numbers. In 2016, rare and endangered great knots (Calidris tenuirostris) were spotted in the marsh, a sighting last recorded only in 1950-60. For winter visitors like the near threatened black-tailed godwit (Limosa limosa), wood sandpiper (Tringa glareola), and the glossy ibis (Plegadis falcinellus), Pallikaranai is home for more than four months in a year. In fact, migratory waterbirds are just one part of Pallikaranai’s biodiversity. Plants, freshwater fish, mammals, reptiles, and small organisms that go unnoticed, are vulnerable to changes in wetlands and the interconnected water channels that feed them. 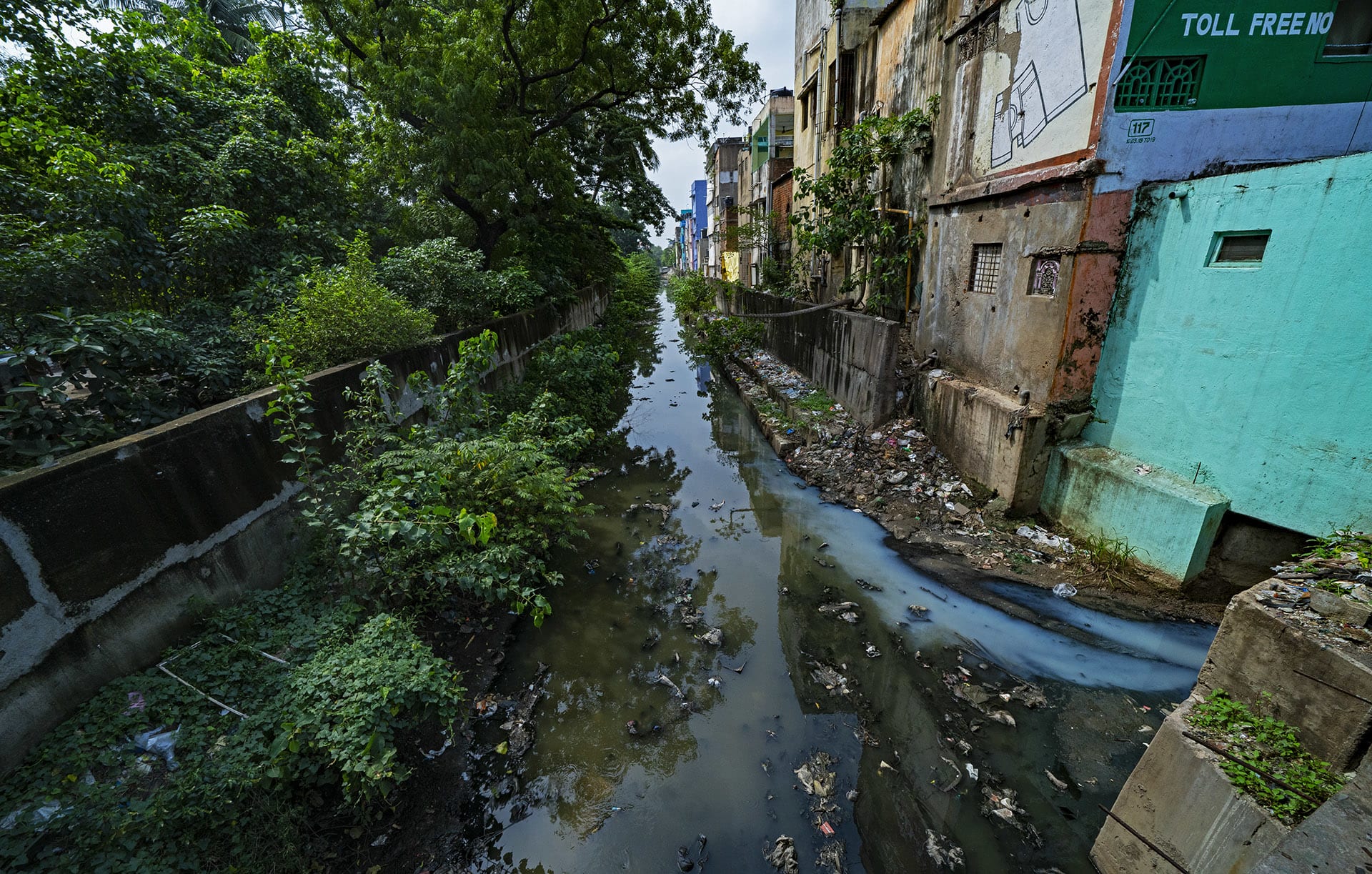 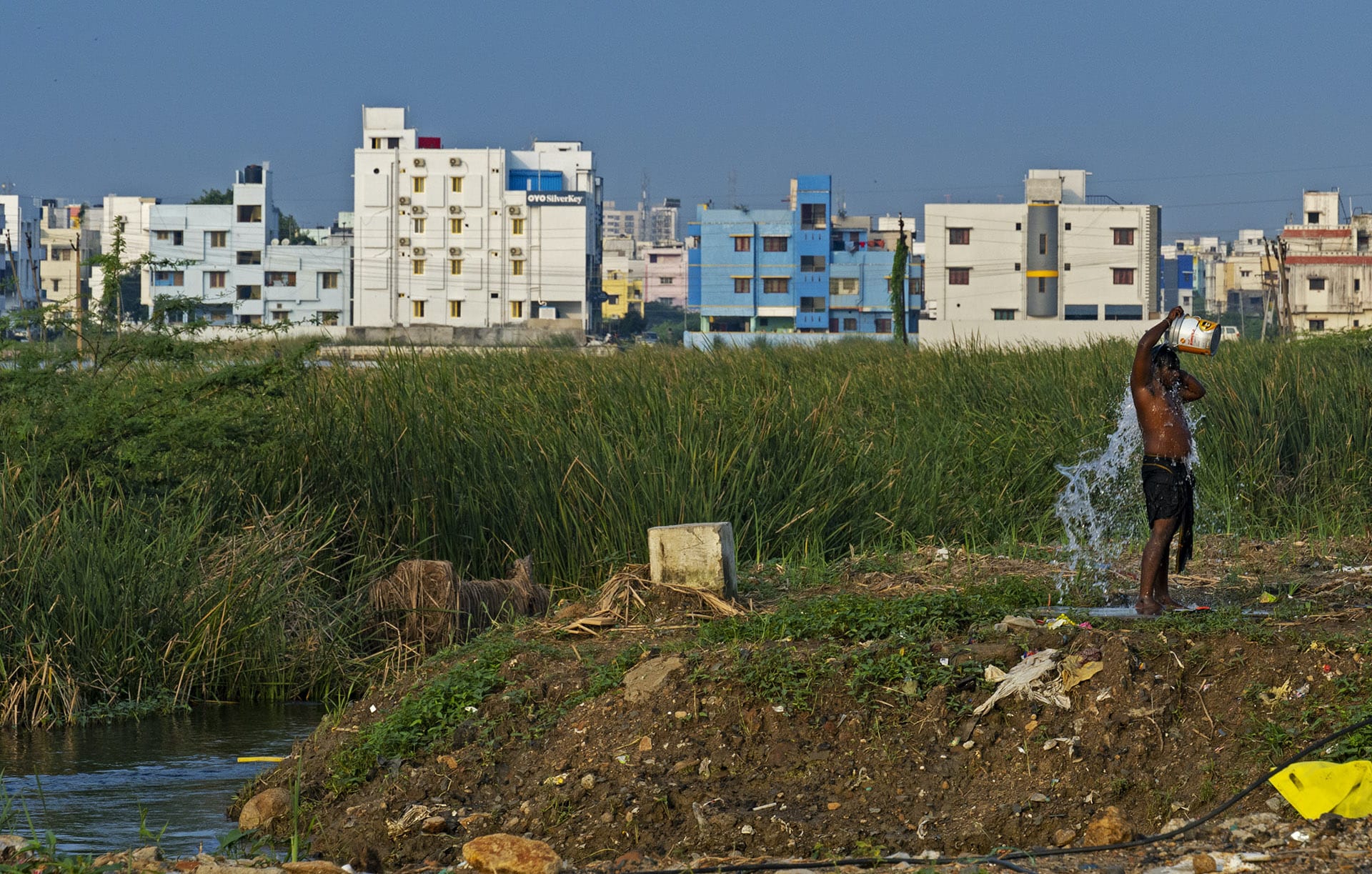 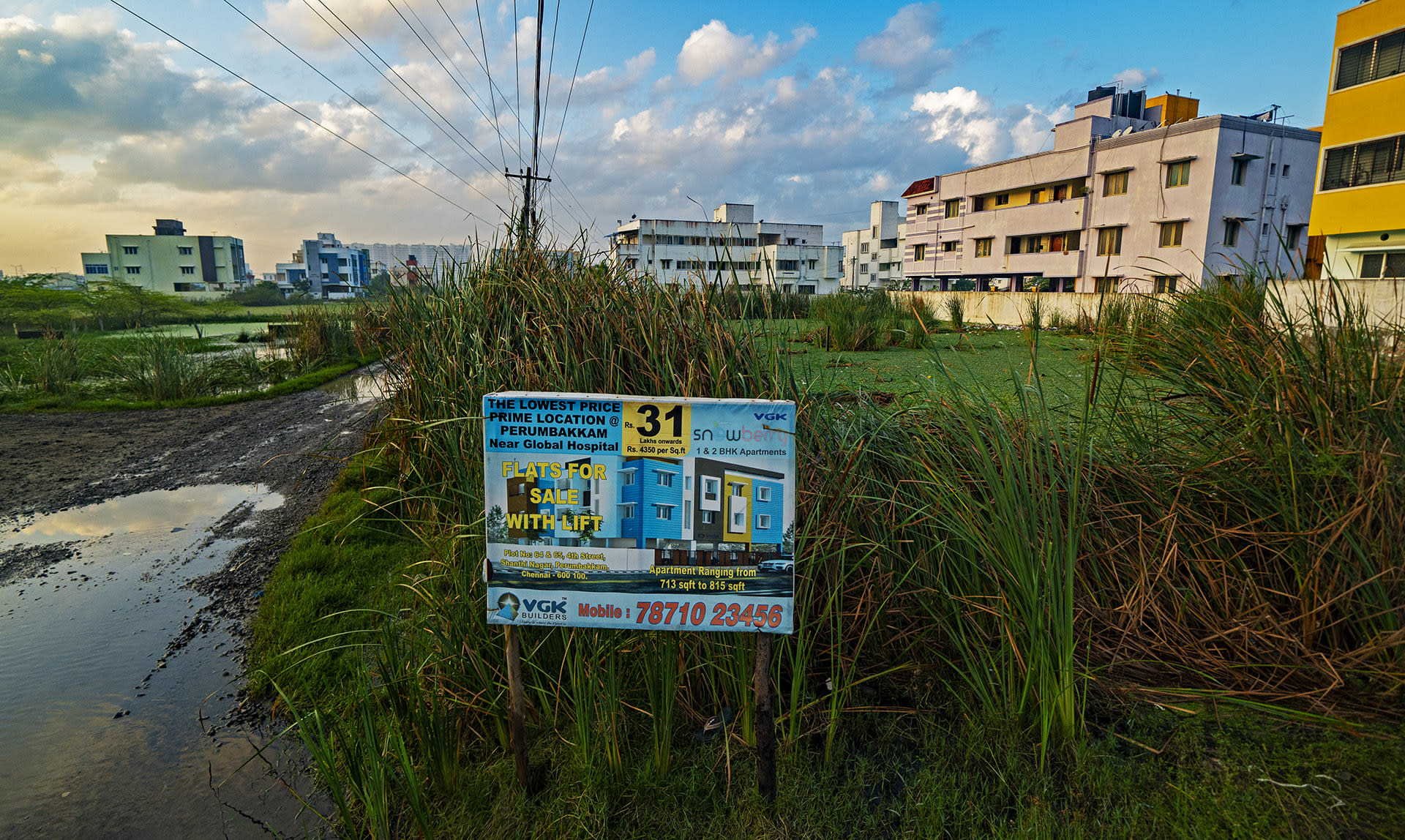 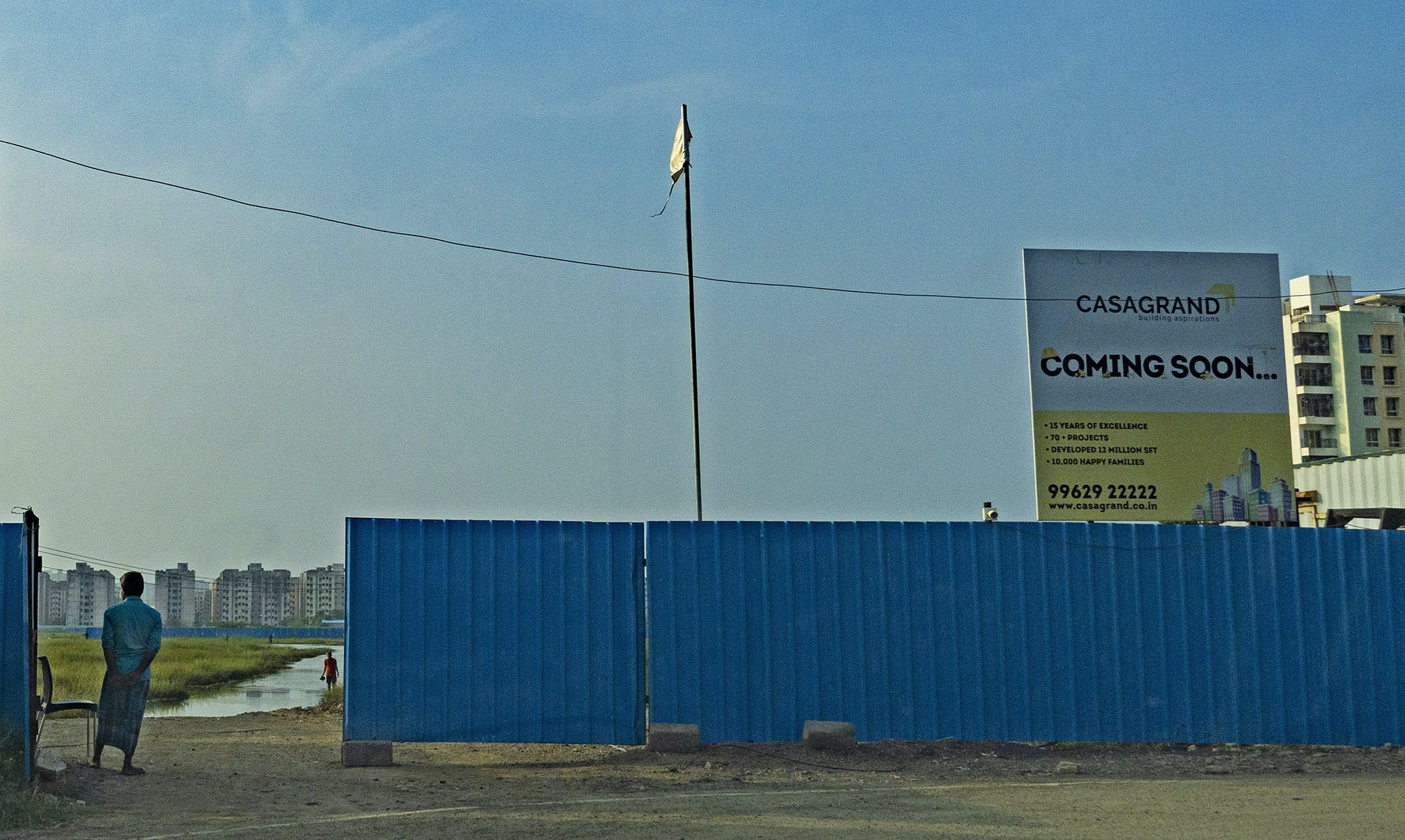 In most canals across the city, garbage and sewage collect through the year, such as this canal in Mambalam (top right). At the same time, communities around the marsh use available water despite growing mountains of municipal waste (top left). Interconnected water channels that feed wetlands are crucial to the city's water management, but this has been decimated over the years. Take the case of Pallikaranai marshland (above left and right), which used to cover 50 sq km but has eroded to a mere 6 sq km, in large part due to construction, unchecked development and encroachment.

Dr Daniels tells us that they recorded 170 species of birds in 2019, of which 65 are migrant visitors. This is an increase of 64 species from the 2002 study. The news is heartening. On average, considering avian life alone, the Pallikaranai marsh hosts over 40,000 birds in the migratory season, and over 5,000 resident birds through the year. The marsh also serves as breeding ground for resident birds like the threatened black-headed ibis (Threskiornis melanocephalus) and the near threatened spot-billed pelican (Pelecanus philippensis).

But Pallikaranai is teetering on a knife’s edge. An Anna University study in February 2019 noted that the marshland emitted a staggering 8.4 gigatonnes of methane annually, and that the fifty-year-old Perungudi dumping site was the main source of methane. While a healthy marshland functions as a carbon sink even while emitting greenhouse gases like methane, the extremely high level of emission in this situation is upsetting the natural balance of the marsh ecosystem. There have been reported incidents of spontaneous combustion in the marshland, resulting in loss of bird and animal life.

In spite of restrictions, the civic body continues to offload unsegregated garbage into the marshland. Three city sewage treatment facilities located on the marsh treat around 54 million litres/day. Compounding the situation are reports of dumping by industries. As a result, the marshland’s hydrological system has become increasingly polluted with both surface water and groundwater contamination. Alarmingly, water quality analysis indicates the presence of mercury, lead, and cadmium in quantities four times over permissible levels.

Rampant development has ensured that Chennai's marshlands have disappeared, handicapping the city's ability to cope with flooding during the monsoons and water availability during the summer.

The reality of the Pallikaranai marshland today is a tableau of contrasts. Even as garbage dumping and discharges contaminate the marsh ecosystem, the increase of bird arrivals subsequent to conservation and restoration efforts indicates that the fraught marshland is capable of sustaining a variety of wildlife in the protected patches. But the toxins are leaching in, and the trend has to be stemmed to prevent the vulnerable marsh ecosystem from collapsing.

Encouragingly, in 2018, the Pallikaranai marshland was prioritised by the MOEFCC under the National Action Plan for Conservation of Migratory Birds in Central Asian Flyway. Proposals have been submitted by the state forest department seeking recognition for the protected part of the marshland as a site under the Ramsar Convention.

Back on my birding walk, there was a flurry of activity in the mudflats at a distance. My binoculars picked up a huddle of wood sandpipers feeding busily, and graceful long-legged black-winged stilts. As I watch, I realise that in my viewfinder is etched the dichotomy of Pallikaranai. In the same frame as the sandpipers, I see mounds of plastic waste in the sludge. The mongoose I spotted was right next to a sewage outlet.

The ground reality of Chennai’s last urban wetland is complicated and tenuous.There is scope for recovery, at least in the protected areas, if the degradation is  stemmed now. Pallikaranai is a story of resilience, but it is struggling for air. 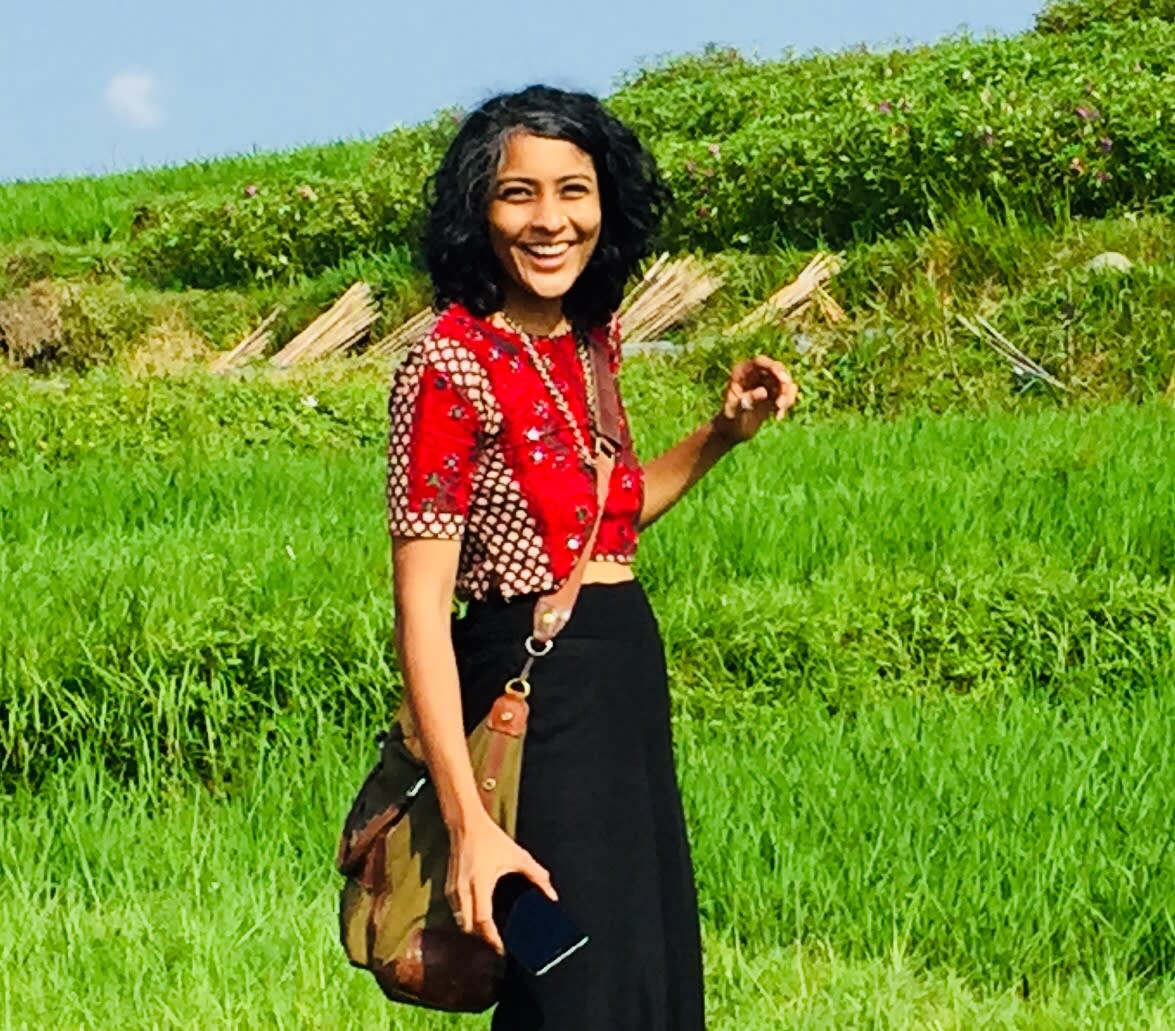