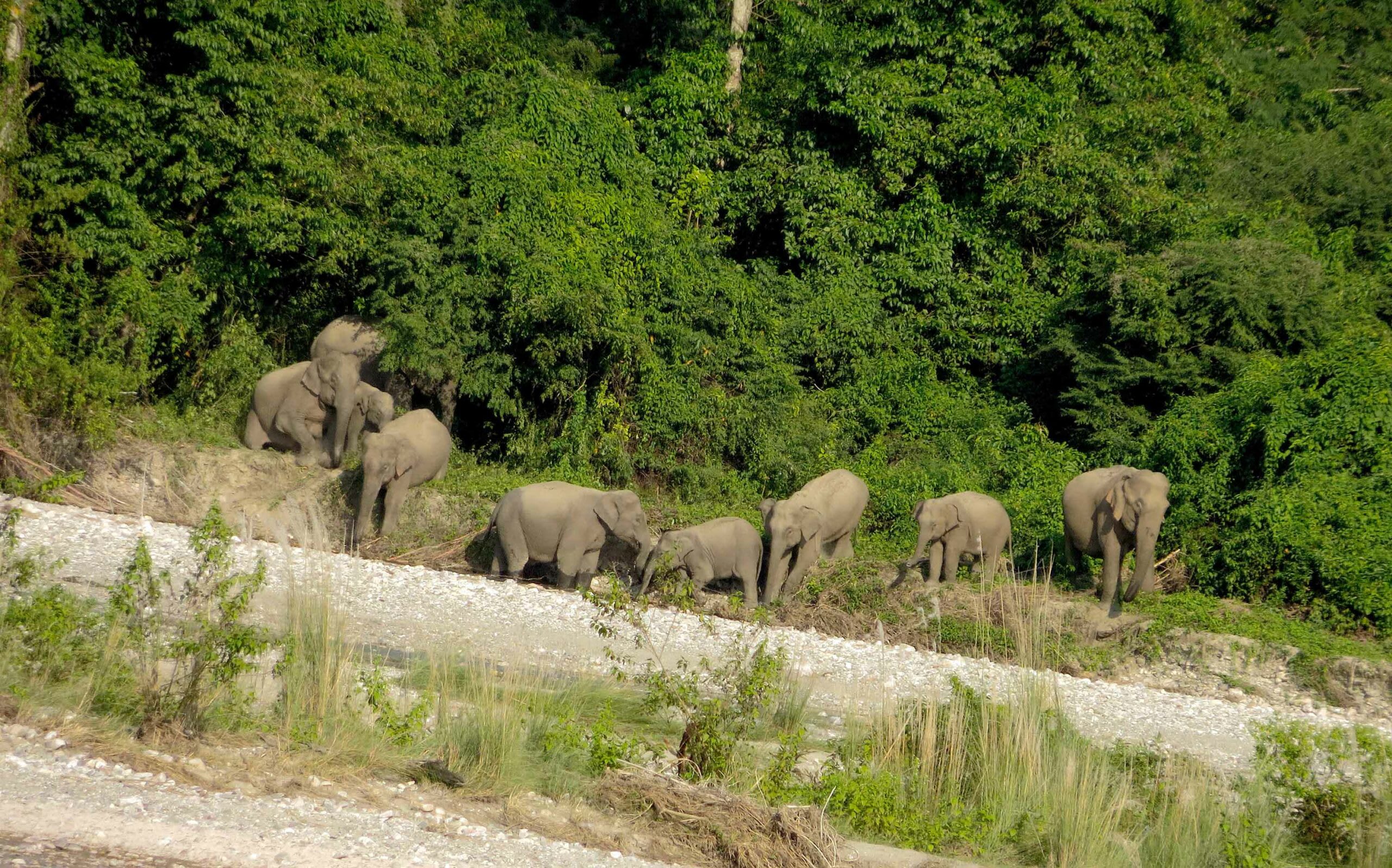 In his hunting journal Thirty-Seven Years of Big Game Shooting, the Maharaja of Cooch Behar, Niprendra Narayan Bhup Bahadur, notes that in a few days’ sport in the month of March, 1900, his hunting party had shot 11 tigers, 11 leopards, one rhino, three water buffalos, five bears, one bison, two sambar, three hog deer and three pigs in the forests along the banks of the Saralbhanga river in the foothills of Bhutan.

These forests in the biodiversity-rich foothills, today, form part of Raimona National Park in Assam. Named after the historical capital of Bijni estate, Raimona, the park was declared on June 9, 2021, recognising the presence of the teeming biodiversity. It consists of contiguous forest patches covering an area of 422 sq. km. comprising the northern part of the notified Ripu Reserve Forest which forms the western-most buffer to Manas Tiger Reserve in the foothills of Eastern Himalaya Biodiversity Hotspot.

Known for its historical elephant habitats, the government of Assam had declared in 2003 Chirang-Ripu Elephant Reserve, with an area of 2600 sq. km.  The newly declared park, along with Manas National Park, is vital to trans-boundary movement of elephants and other wildlife through northern West Bengal, Bhutan and Arunachal Pradesh. 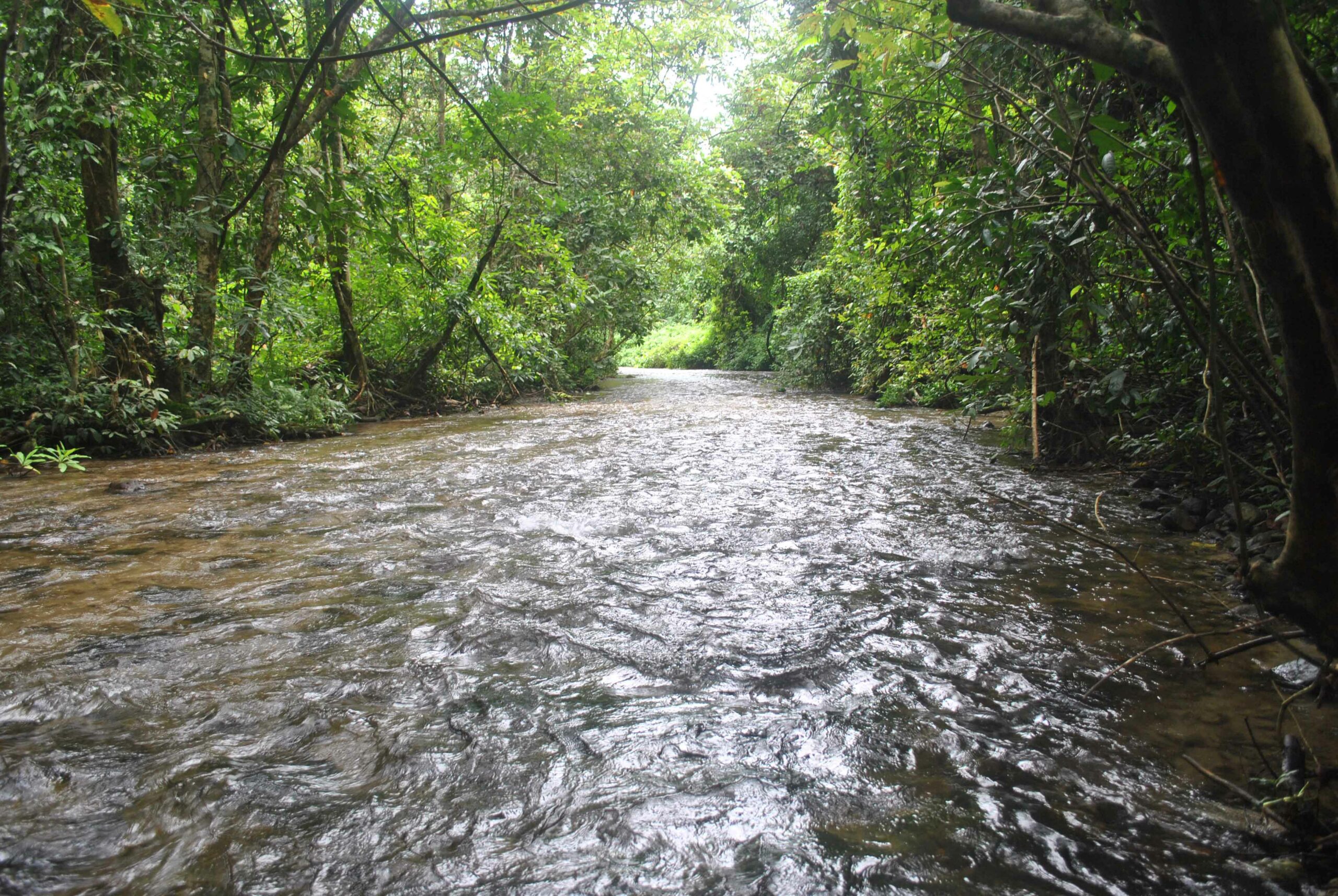 Legendary elephant herds of Raimona
According to a census conducted by the Assam forest department in 1981 about an estimated 1200 elephants were found in the Manas Tiger Reserve comprising an area of 2837 sq. km which included the Raimona forests.

Many legends have emerged surrounding the elephant herds of these forests. Some of which have also found their way into popular literature. A folk tale narrates that a maiden clad in white saree commanded one of the largest elephant herds in these forests. Foresters and locals alike claim having seen this pagli sahan, meaning “the elephant herd commanded by the mad girl”. Gordon Casserly, a colonial writer, employed variants of this folk narrative in his novels, The Elephant God and The Jungle Girl. In his book Manas, Manuh aru Trimurti, Assamese writer Ganesh Das mentions about foresters who claimed that they’d seen pagli sahan. Further, a recent novel, published in 2019, The Elephant Girl is also built around this myth.

These legendary elephant herds are now in peril owing to fragmentation of their habitats. A 2011 study by Aaranyak, a conservation NGO, reveals that elephant distributional range in the landscape has been heavily fragmented and shrunk primarily because of anthropogenic activities. “The highest level protection coming in the form of Raimona National Park therefore is a very welcome step. It will help arrest habitat loss and fragmentation,” says Jyoti P. Das, one of the authors of the study.

An endangered primate, rare butterflies, and a host of endemic species
The Asian elephant is not the only flagship species found in Raimona National Park. The park is also home to Gee’s golden langur (Trachypithecus geei), one of the world’s most endangered primates, endemic to Bhutan and Assam. The primate was first recorded in 1953 by naturalist E. P. Gee in the semi evergreen forests of Jam Duar in Raimona. With 80 percent of the golden langur population scattered in reserve forests and community forests outside protected areas, the declaration of the national park is expected to be a boon as it bestows better protection on some of these forest patches. 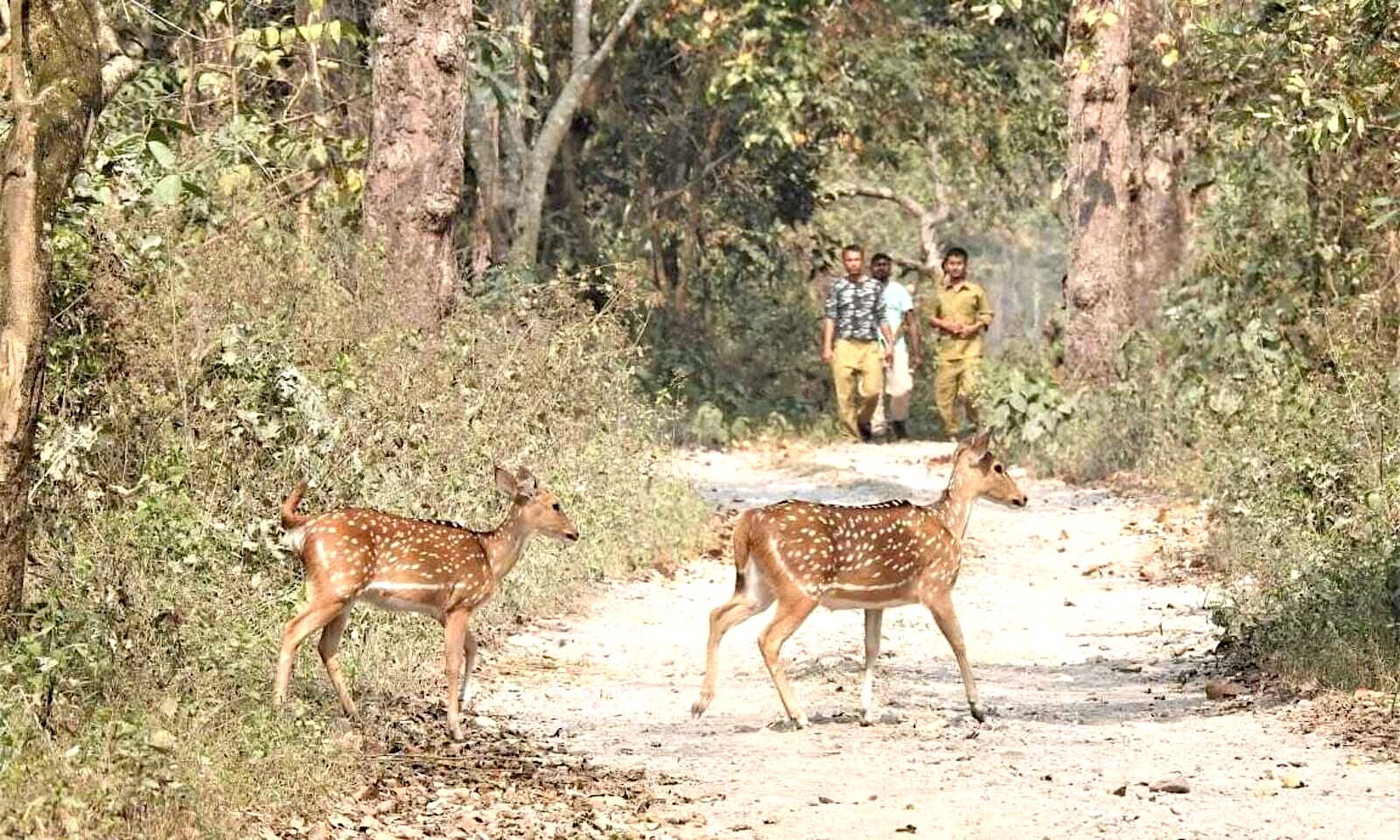 The Ultapani and Ripu-Chirang reserve forests, now part of Raimona National Park, is also home to rare butterflies. Kushal Choudhury, zoologist and assistant professor at Kokrajhar Science College, who has worked extensively on the butterflies found in Raimona, documented two rare butterfly species in 2010. “A rare endemic butterfly species named the yellow-crested spangle (Papilio elephenor Doubleday) was sighted in Ripu-Chirang forests in 2009 after a long gap of 100 years. In these forests, we also documented an extremely rare butterfly species from Lycaenidae family found primarily in China and Japan, namely Moore’s Cupid Shijimia moorei,” says Choudhury, who published a paper in 2010 describing the two species.

The lepidopterist further says that the road that darts through Ripu-Chirang forests connecting Kokrajhar to Saralpara has been a graveyard of butterflies. A 2009 study conducted by Choudhury with a fellow researcher, documented a total of 7431 butterfly deaths of 81 species over the span of one year (2007-2008). The new protected status of these forests as part of Raimona National Park could be a good step towards regulating vehicular traffic on the road in order to mitigate butterfly mortality rate, he adds.

In addition to hosting more than 150 butterfly species and other rare species such as Bengal tiger, clouded leopard, gaur and chital, Raimona is also recognised as an Important Bird and Biodiversity Area (IBA) by BirdLife International for its avian biodiversity.

A transboundary landscape
Underscoring the significance of the landscape as a zone of connectivity, Assam’s forest department in a statement said that historically the Raimona forests were a part of the migratory route of the faunal species from Himalayan Mountain, Indo-Malayan and Indo-Chinese realms towards the west and Peninsular Indian realm species to the east. The newly declared national park is part of a 2400 sq. km. transboundary conservation landscape sharing contiguous forest patches with Bhutan’s Phibsoo Wildlife Sanctuary and Jigme Singye Wangchuk National Park.

Ecotourism potentials
The birth of the new national park, sixth in the state, has also brought hopes of boosting tourism in western Assam which sees relatively less tourist inflow. Zoologist Choudhury of Kokrajhar Science College says that the richness of butterfly biodiversity in the park, which is unique in the region, could be a good tourist attraction in Raimona. However, he suggests a cautious approach which ensures that tourism doesn’t have negative effects on the butterfly population. 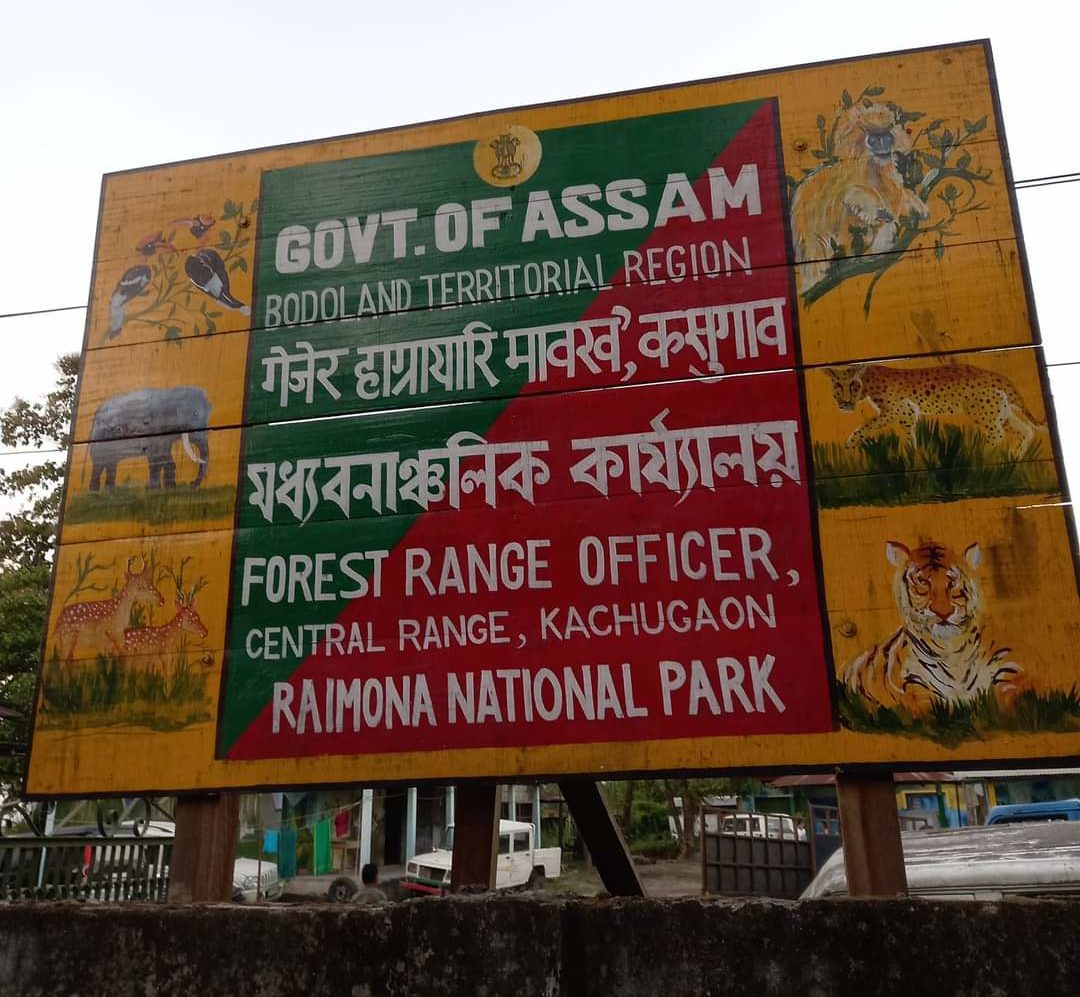 Local people living in the fringe areas of the park depend on the forest for food, fuel, medicine, grazing and house construction materials. While some local villagers are apprehensive that the declaration of the park could curtail certain rights they have traditionally exercised over these forests, Khampha Basumatary, a former Bodo insurgent and local leader in Saralpara, exudes hope that the establishment of the park will alternatively open up eco-tourism opportunities for the villagers and local entrepreneurs.