Close to the metropolis of Bangalore, the Ramadevarabetta Vulture Sanctuary is a pristine protected space in which people can learn about reptiles, dragonflies, endangered vultures, and all kinds of other birds 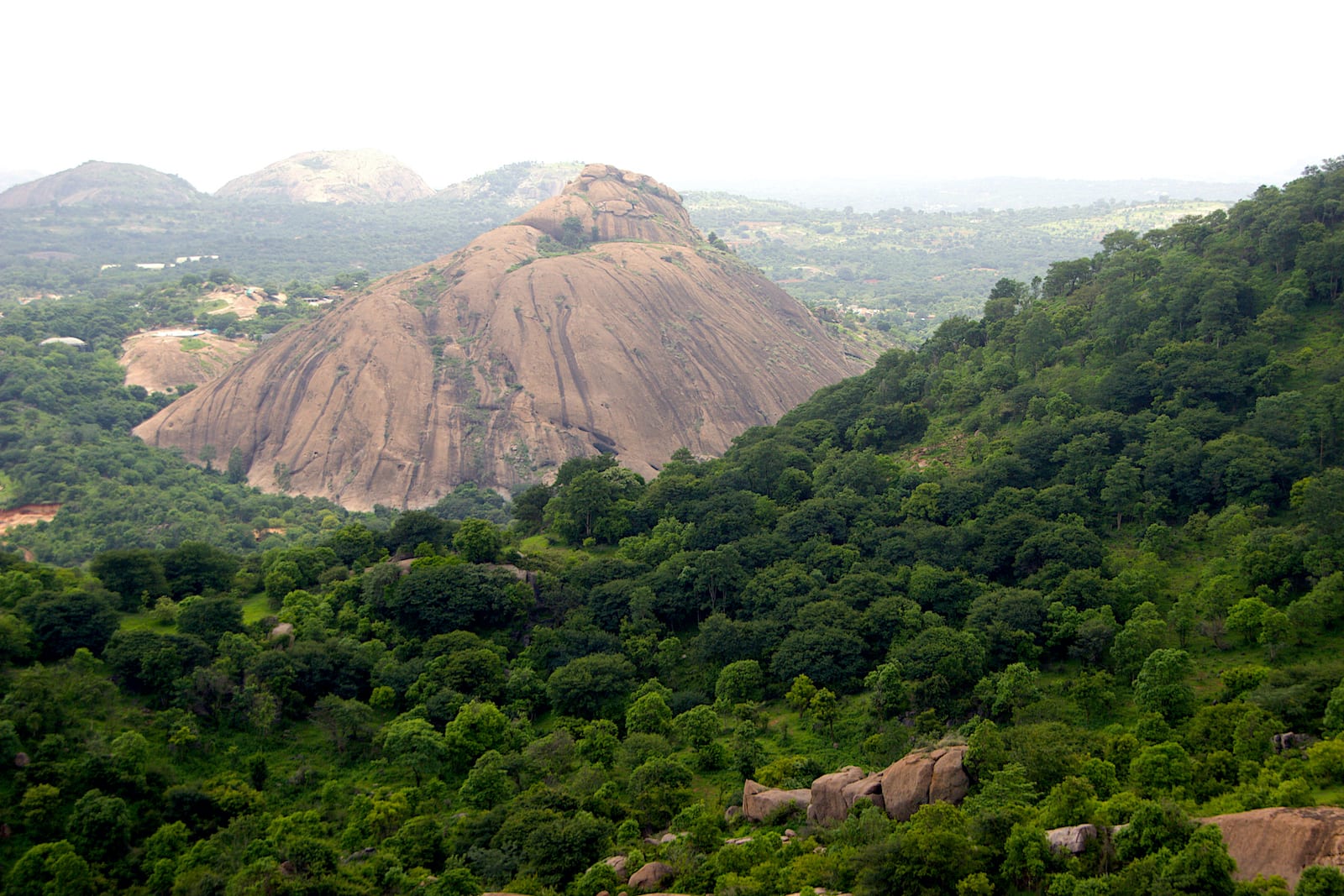 I have spent nearly all my life in Bangalore and like most Bangaloreans, I have travelled on the Bangalore-Mysore highway more times than I dare to count. Until 2014, these journeys filled me with questions like, “When are they going to widen this highway?” and “When will these ‘small towns’ develop?”. Ramanagara was one of the small towns that I was always keen on seeing through the bus window. It was a sight that marked one-third of the journey to Mysore. The vast, surrounding scrub jungle dotted with rock formations that seem to defy gravity never caught my attention.

When I read an article in 2012 about 346 hectares of land in Ramanagara being turned into the country’s first vulture sanctuary, I was filled with oodles of indifference matched only by my own ignorance. That is the person I was until my first birding trip to the monolithic cradles of life that sit quietly on the outskirts of India’s Silicon City. After spending six months mostly counting pigeons on my terrace, I was on my way to Ramadevarabetta, a hill that marks one edge of the Ramadevarabetta Vulture Sanctuary. Ramadevarabetta roughly translates to Lord Rama’s mountain, and a charming temple to the deity sits atop the picturesque hill.

The hilltop of Ramadevarabetta in Ramanagara, about 50 km from Bangalore, offers panoramic views of the hills and rocky outcrops around. Photo: Samuel John
Cover photo: From Ramagiri, a top-down view of the landscape, tree cover, and rocky hills around Ramanagara in Karnataka. Cover Photo: Mahantesh C Morabad/Shutterstock

Rapturous morning with raptors
Back in 2014, the entrance to the Ramadevarabetta Vulture Sanctuary was marked by an arch and what seemed like an ideal place for a functional gate. After a short ascent on tarmac on our bikes, we parked at the base of the hill. We began climbing the neatly laid stone steps and were promptly met with Ramanagara’s very own dawn chorus. More species of birds than I could recognise began singing as the sun gently pierced the dense canopy. Oriental white-eyes decorated the fig tree outside the first temple. The mesmerising long tail of an Indian paradise flycatcher streamed into the understorey. The hills were alive with bird song.

We found ourselves taking many detours off the main path. The first of these was an open patch of grass. Crouched amidst the grass, with our binoculars squeezed against our faces, we watched an ensemble of raptors paint the sky. Shaheen falcons swooped down, shikras plotted their next move from the canopy, and a black eagle cast a shadow from the sky. In the distance, gliding majestically were two Indian vultures, the stars of this sanctuary.

Each time I’ve visited Ramadevarabetta since 2014, the hills have generously displayed wildlife. A working gate appeared around 2016, and in 2020, we were greeted by a forest checkpost at the entrance. All changes for the better it would seem. However, I must admit that the public address system that has been set up on the entire path leading to the temple hampers the outdoor spirit. 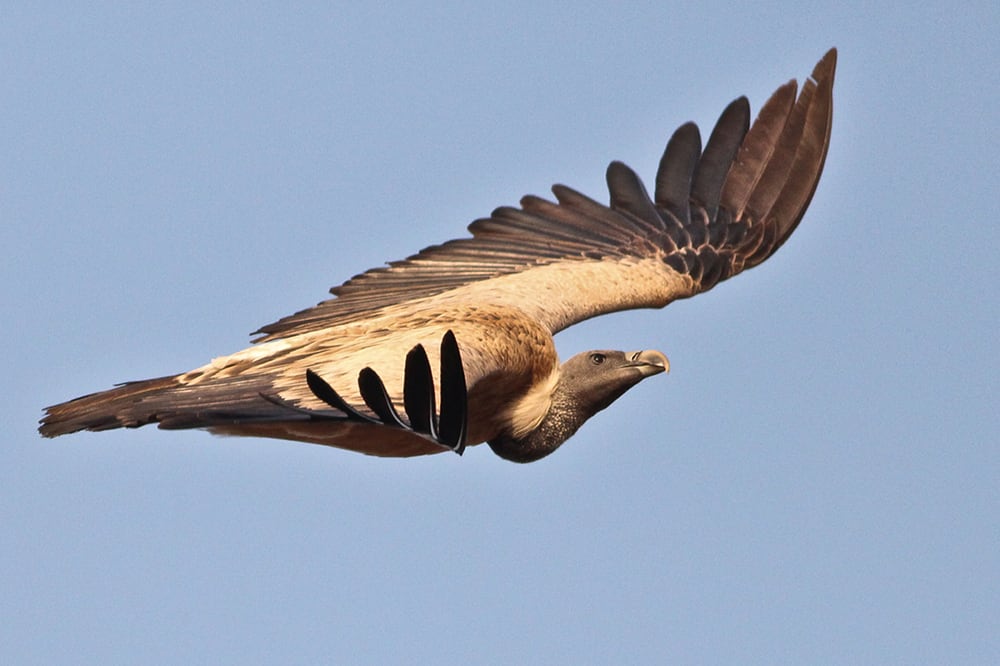 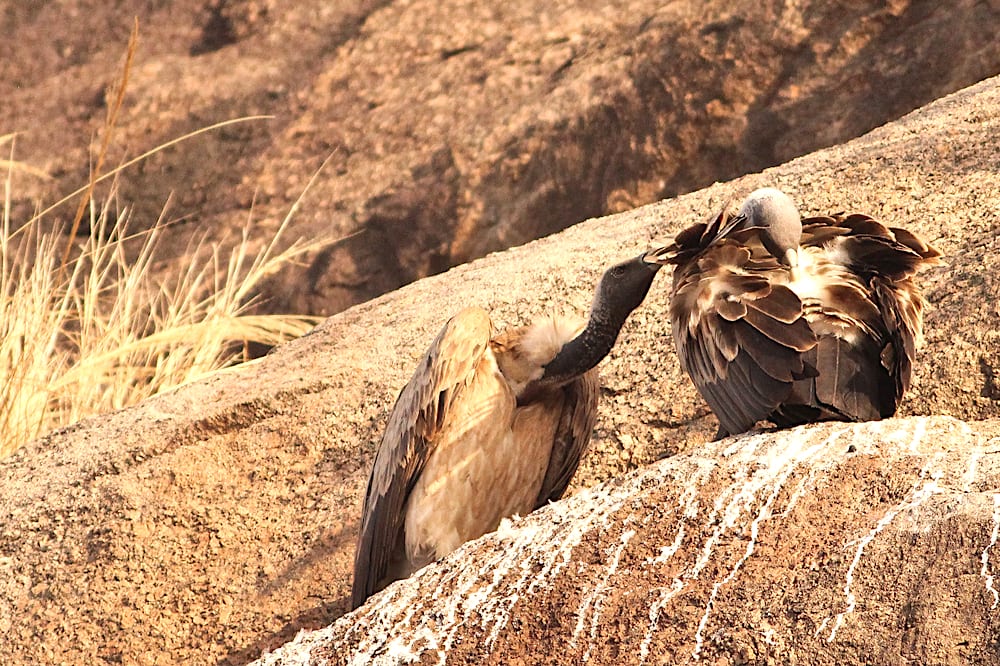 The 346-hectare protected area that constitutes Ramadevarabetta Vulture Sanctuary is the roosting ground for long-billed (left and right) and Egyptian vultures. With vulture numbers decimated throughout the country, witnessing their courtship (right) is a hopeful sign that their population will increase. Photos: Vaibhavcho, CC BY-SA 3.0

Set in stone
This unique habitat of scrub and stone is home to a plethora of life that has adapted so well to the environment. The hills are busy with agamid lizards. While the females look like somebody breathed life into a lizard shaped piece of granite, the males advertise their brilliant red colour to attract females during the breeding season.

Depressions on the rocks collect rainwater and turn into pools teeming with life. Dragonflies can be seen fluttering over these waterbodies looking for their next meal or a suitable location to lay their eggs. There is even a small pool on the highest point on the hill, accessed by a steep climb up steps etched into the rock face. In addition to the usual suspects, the pool even had a resident frog. How that frog got to a height of more than 3,000 feet on a monolith, continues to baffle me. 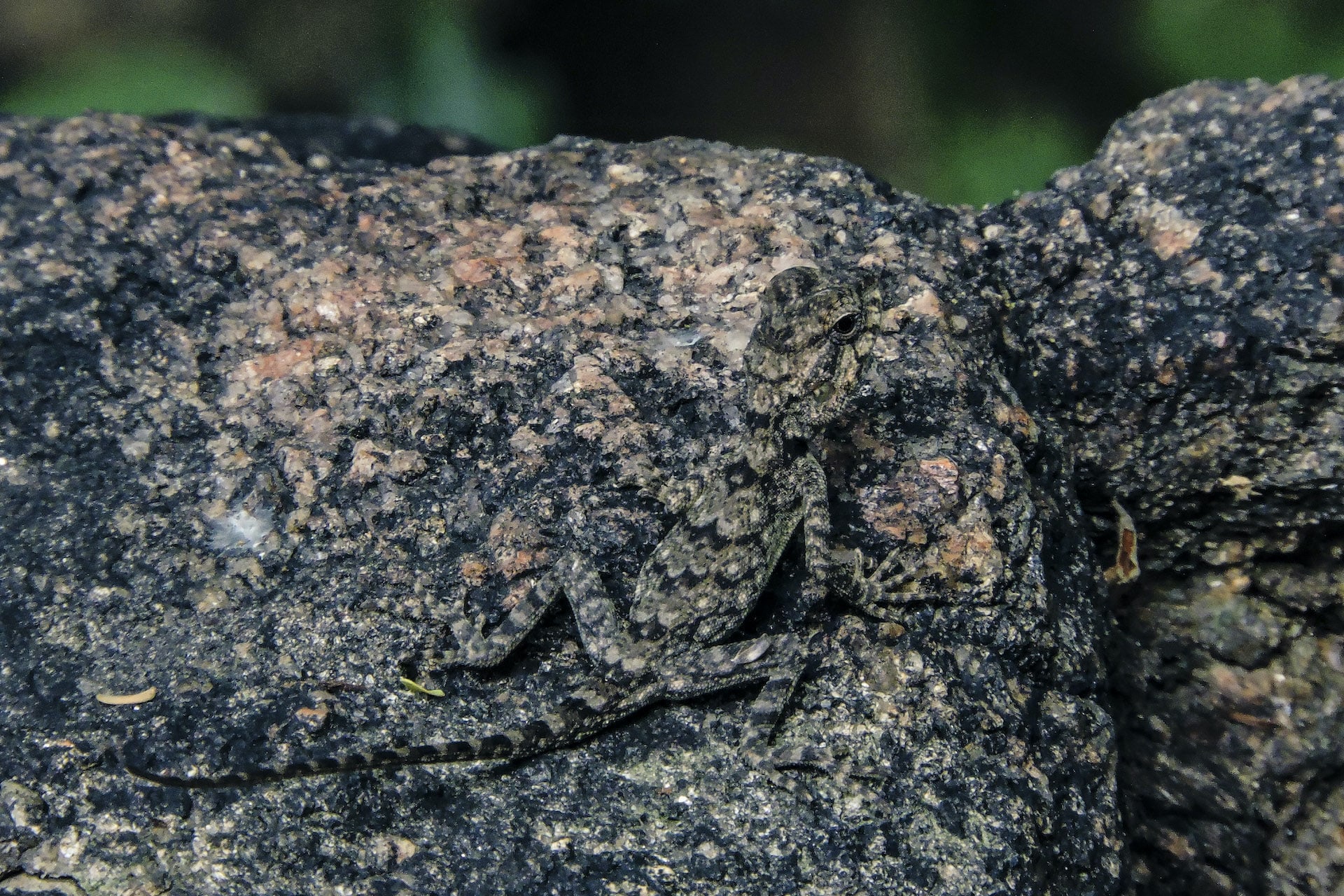 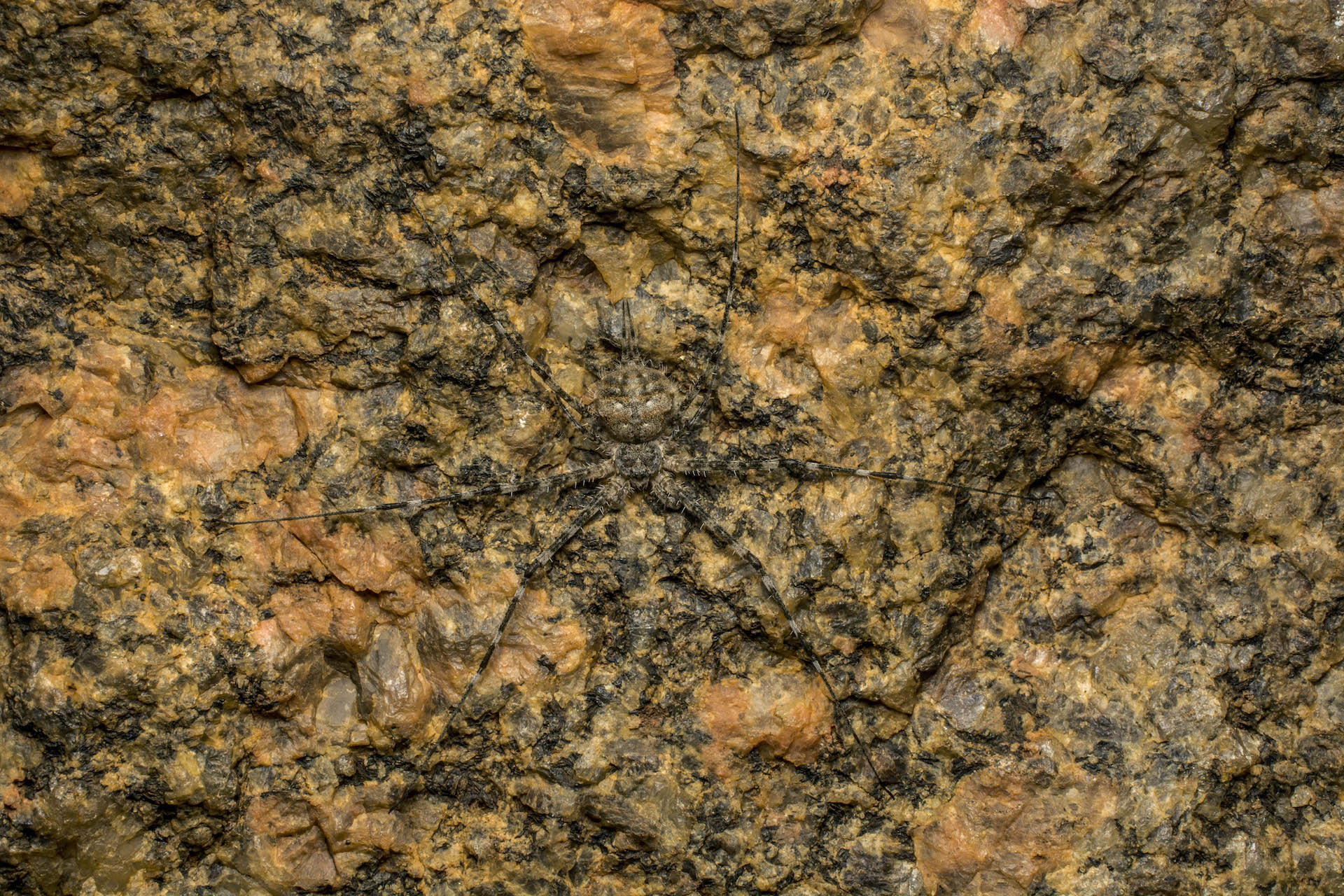 Many life forms have adapted to the rocky habitat of Ramadevarabetta. Look closely to spot two masters of camouflage, an agamid (left) and a twin-tailed spider (right). Photos: Samuel John

Addressing the vulture in the room
This relatively small protected area seems to be a haven for life forms. It is, however, worth remembering that the Ramadevarabetta Vulture Sanctuary was set up to provide the Indian vulture (Gyps indicus) and the Egyptian vulture (Neophron percnopterus) a safe home to roost and breed. An important step to remedy the catastrophic decline of vultures in India.

Veterinarians used diclofenac, an anti-inflammatory drug that served well as a painkiller for cattle. When treated livestock died, vultures would feed on their carcasses, as their crucial ecological role would dictate. Unfortunately, diclofenac causes acute renal failure in them, causing them to die in alarming numbers — an estimated 97-99 per cent of the vulture population was tragically killed by the drug. While the drug has been banned for veterinary use, it is still available for human use and is still known to be used in animals. How has the sanctuary done for vulture populations? While the populations of the Egyptian vulture have risen over the years, there are as few as seven Indian vultures left in the sanctuary (in one of their last roosting sites in inland South India). 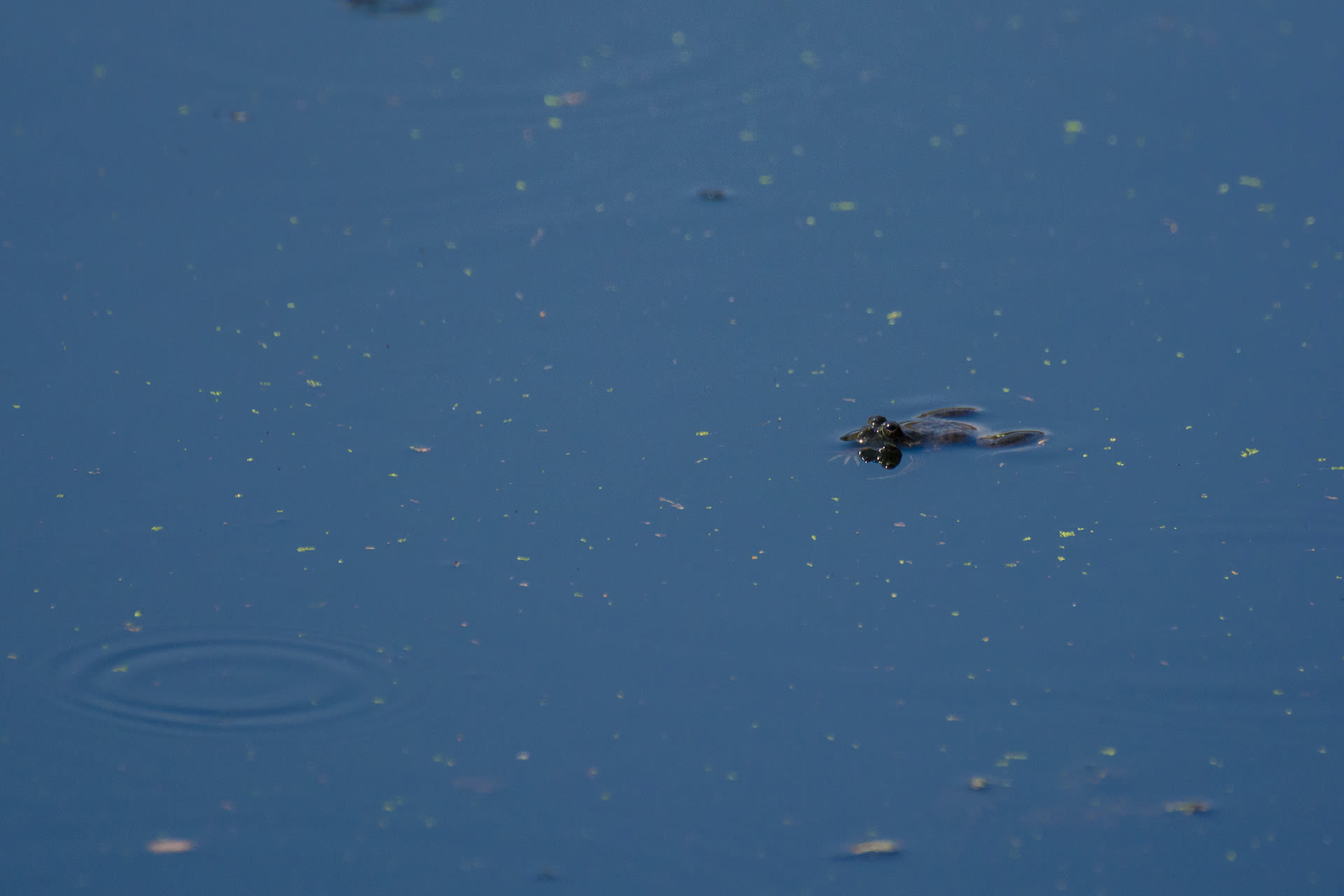 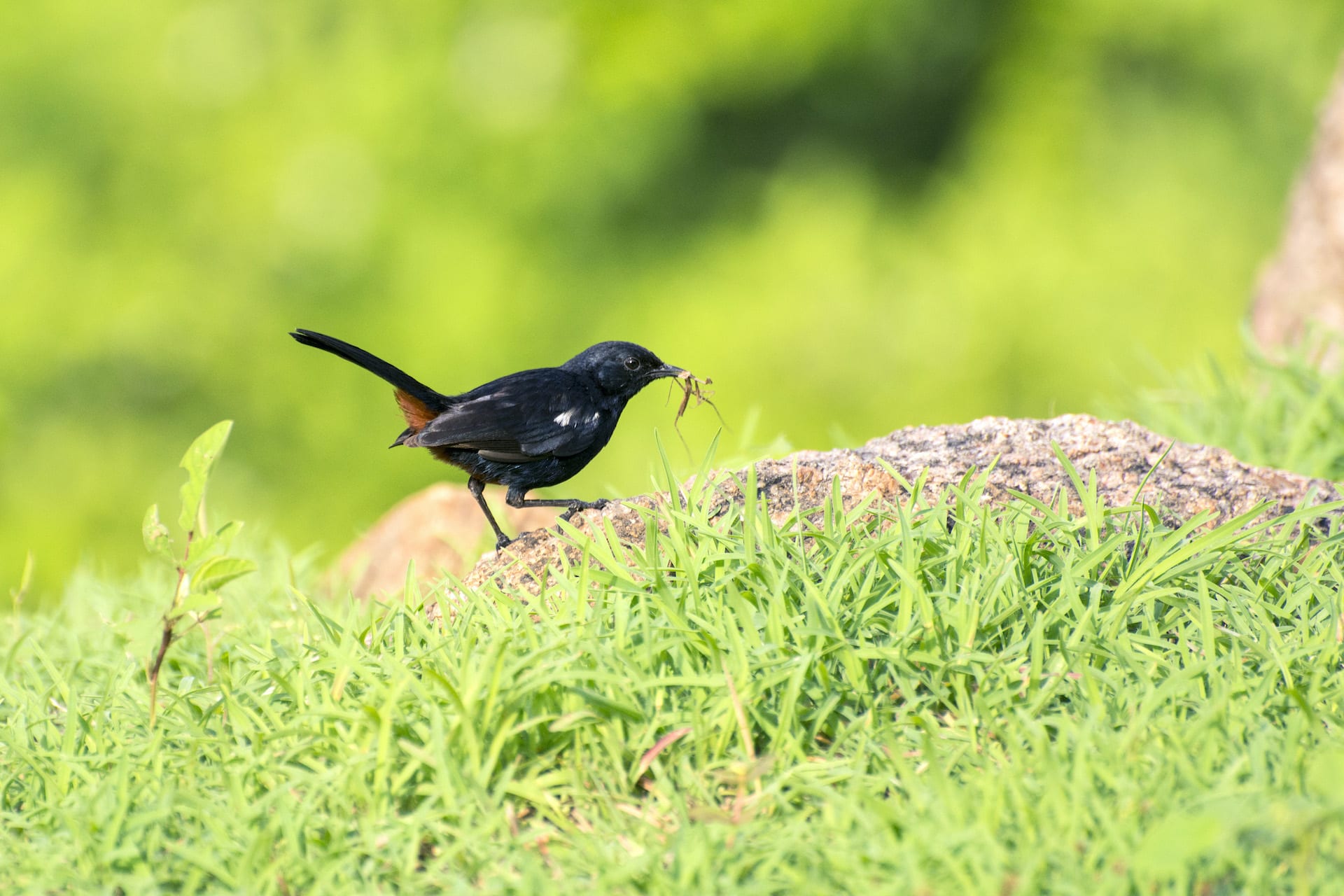 (Left) Atop the highest point on Ramadevarabetta, a small pool of rainwater collects during the monsoon. It harbours many forms of life including a resident skittering frog. (Right) Besides vultures, bird watchers to the area can hope to see Indian robins, kingfishers, ashy prinias, laughing doves, and various other birds. Photos: Samuel John

As we have seen with the 2020 pandemic, our role in destroying natural habitats and the lives of our fellow inhabitants, often comes back to haunt us. Vultures play a critical role in scavenging carcasses. In their absence, untended carrion increases the chances of disease transmission. Ramadevarabetta offers a unique protected area that is accessible to the public, a space that we can share with vultures, eagles, frogs, and dragonflies. How we choose to use this privilege is mostly influenced by the perspectives that have surrounded us through our lives.

Lending perspectives
To many, the existence of this vulture sanctuary with scrub jungle dotted with towers of granite may seem common knowledge. However, there is a significant portion of our population that is unaware of the experiences awaiting them in the natural world, just as it was for me before 2014. Understanding and appreciating the natural environment is the first step in wanting to preserve it. That first step can be as simple as taking a birding trip nearby, or hearing an interesting story about a tree, or seeing a spider you’ve never noticed before in your own garden. To experience the joy of nature is to seek positive changes for it.