Trees and Toddy: In the Sacred Grove of Ajeevali 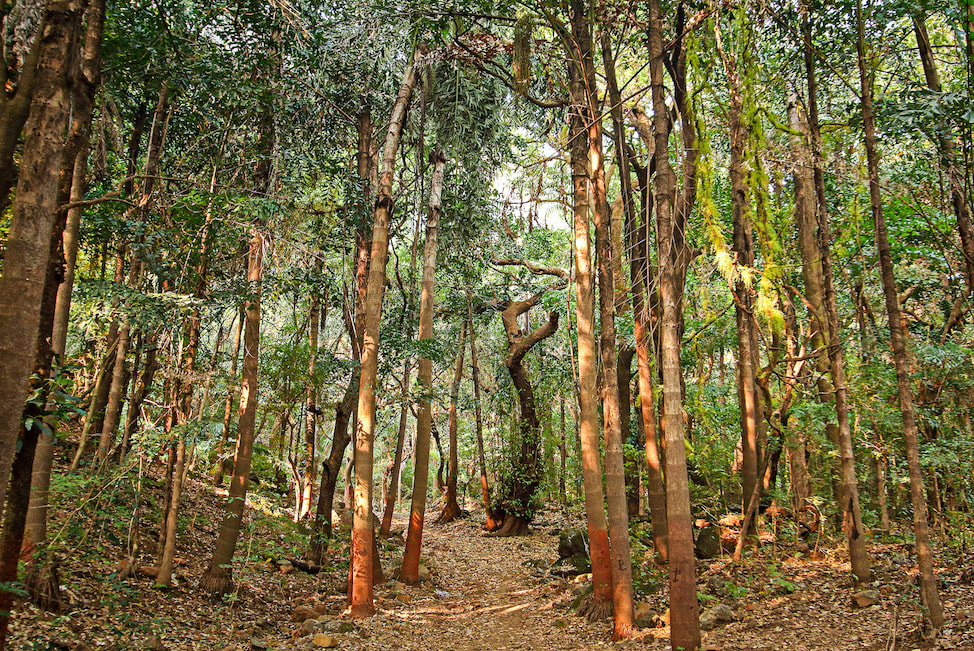 A flock of grey jungle fowl burst out of a fallow field and part-ran part-flew hurriedly into the jungle. It was just after dawn, the perfect time to spot these birds, when they come to forage at the edges of the forest. My guide Anil and I were on a trail to visit the devraai of Ajeevali in the Western Ghats of Maharashtra, about two hours from Pune. Devraais or sacred forests are typically small groves where all vegetation is under the protection of a forest deity. Taking produce from the grove is restricted, and as a result, devraais harbour a rich array of medicinal plants, including rare and endangered species. They are often located at the sources of rivers and streams. Anil had never visited the devraai either, though he had some sense of the land, having accompanied guests until the village of Ajeevali at the base of the mountain.

Over the next 30 minutes, we traversed a steep path recently cleared of vegetation, then negotiated some rough scrub, and finally walked along a bullock cart path, until we reached an old stone wall covered with lichen. It was early in the morning and cold, but beautiful ⁠— a typical Western Ghats landscape of small fields amidst secondary and undisturbed forest patches. The rice crop had been harvested some time back, and the barren fields were getting ready for raab, a practice of burning of vegetal matter for fertiliser in the form of ash. 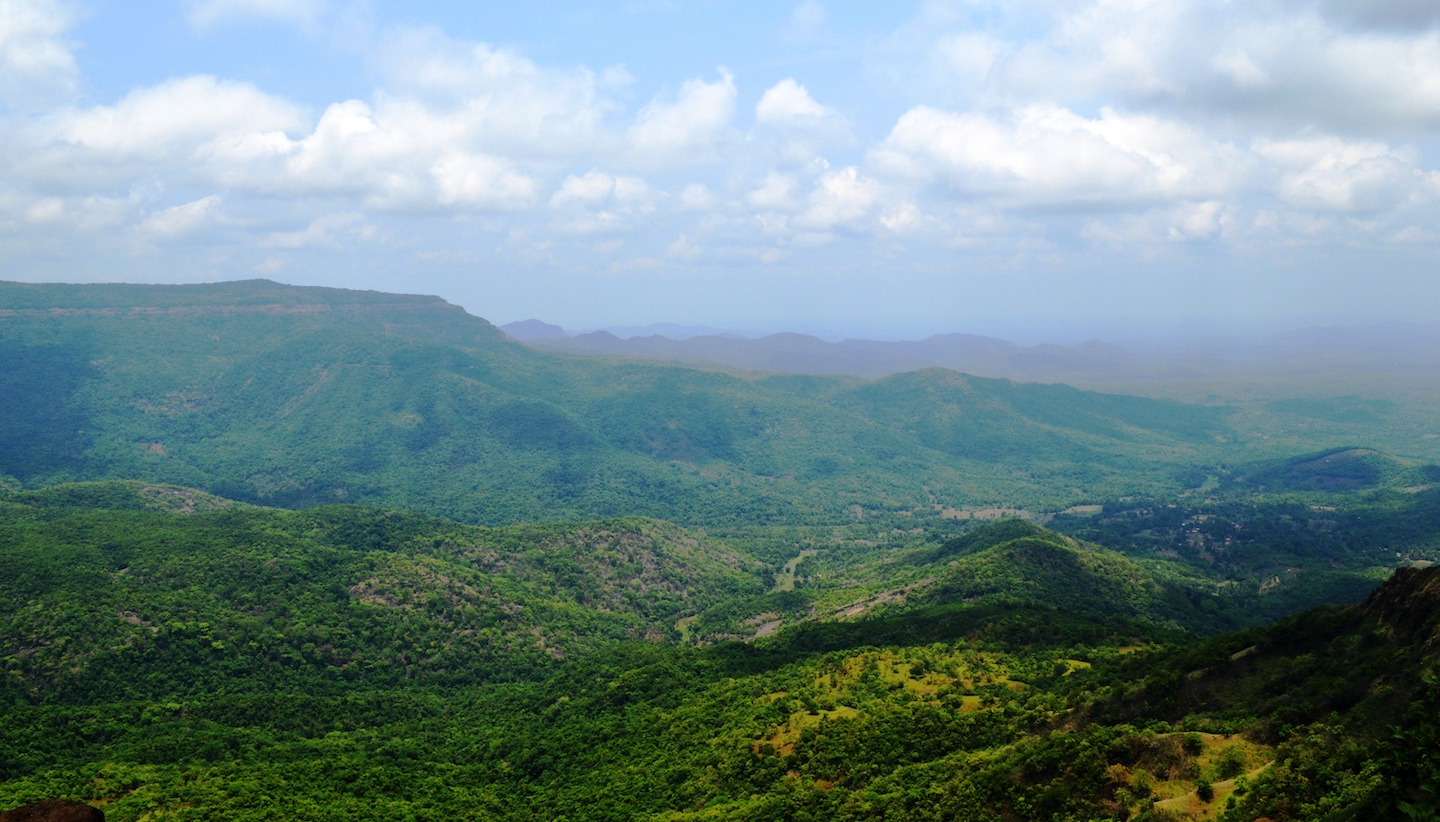 The northern arm of the Western Ghats in Maharashtra, commonly known as the Sahyadris is the source of important peninsular rivers including the Krishna and Godavari. Photo: Rhishikesh Agashe/Shutterstock Cover Photo: Ajeevali devraai is two hours by road from Pune, Maharashtra, close to Pavana Dam. The sacred forest includes soaring fishtail palms and is a treasure trove of biodiversity. Cover Photo: Vivek Kale

Nearby, a leafless Indian silk cotton tree (kate savar in Marathi, semal in Hindi) was putting on its annual flower show. The sun warmed the treetops and the birds became active. I could see shy drongos and green bee-eaters making their sorties to catch insects and warm up for the day. A black-shouldered kite was sunning itself, looking quite funny with its tail upturned for balance.

We continued walking, seeing and hearing more birds along the way, until the fields ended and the forest became dense — the devraai had surely started. We were soon on a rough road that could take four-wheelers, though thankfully, there were none. Near the upper edge of the slope, where a sheer cliff rose to the crest of the mountain chain, we found ourselves surrounded by towering, wild fishtail palms (Caryota urens). I had seen them earlier, mostly in cities, but their height was something else here. Below the palms, the undergrowth was sparse, with a few woody creepers that seemed older than the trees they hung on.

This particular devraai is famous for fishtail palms which are a source of toddy (maadi), a fermented drink made from the extract of the inflorescence of the tree. The toddy is extracted by making a skilful cut near the flowers, and then collecting the sap in earthen pots tied to the branches of the tree. To reach the flowers of the palm trees ⁠— around hundred feet from the ground ⁠— a ladder is made using bamboo branches tied to each other using creepers, all sourced from the forest. This process of tapping happens twice daily: early in the morning, and around 4 pm, after which the slightly fermented sap is sold to traders.

We turned a corner and reached a garish concrete building jutting out of the vertical cliff. Here we met a middle-aged gentleman wearing a full-sleeved shirt, white pyjamas, and a Nehru cap. He carried a copper vessel with water, like those used for pujas. We greeted each other, took off our shoes, and climbed the stairs to a cave-like chamber where the forest deity resided: a rounded stone with two near-symmetrical holes serving as eyes.

The deity of Ajeevali, called Waghjai, is housed in a natural cave. In recent years however, a garish concrete structure provides access to the shrine. Photo: Vivek Kale

In recent years the deity had been painted with multiple coats of saffron paint, though I suspect the original must have had a natural finish with moss growing on it. At the shrine we met a second villager, who complained that this area had been off-limits for the past three years due to a court case. As a result, he said, the deity had been neglected and the space had been taken over by antisocial elements.

Toddy lies at the heart of the Ajeevali devraai story. A few decades ago, a part of the 39-acre devraai was auctioned for the extraction of toddy at a modest sum of Rs 800. Typically, about 40 palms put out inflorescence at a time and are suitable for tapping. The price soon climbed to Rs 18,000, and then even more until it reached 18 lakhs a few years back. The money earned was used to bring infrastructural development to the village.

Due to issues related to taxes from the sale of this toddy, a case was filed in a court, which stayed the auction. This rankled the men at the shrine who believed an internal village matter was unnecessarily taken to the courts. It was unclear to me whether the case was resolved or not, but the auction happened again in 2019, after a gap of three years. This time, the palms fetched Rs 13 lakh, and the villagers gained back access to the shrine. 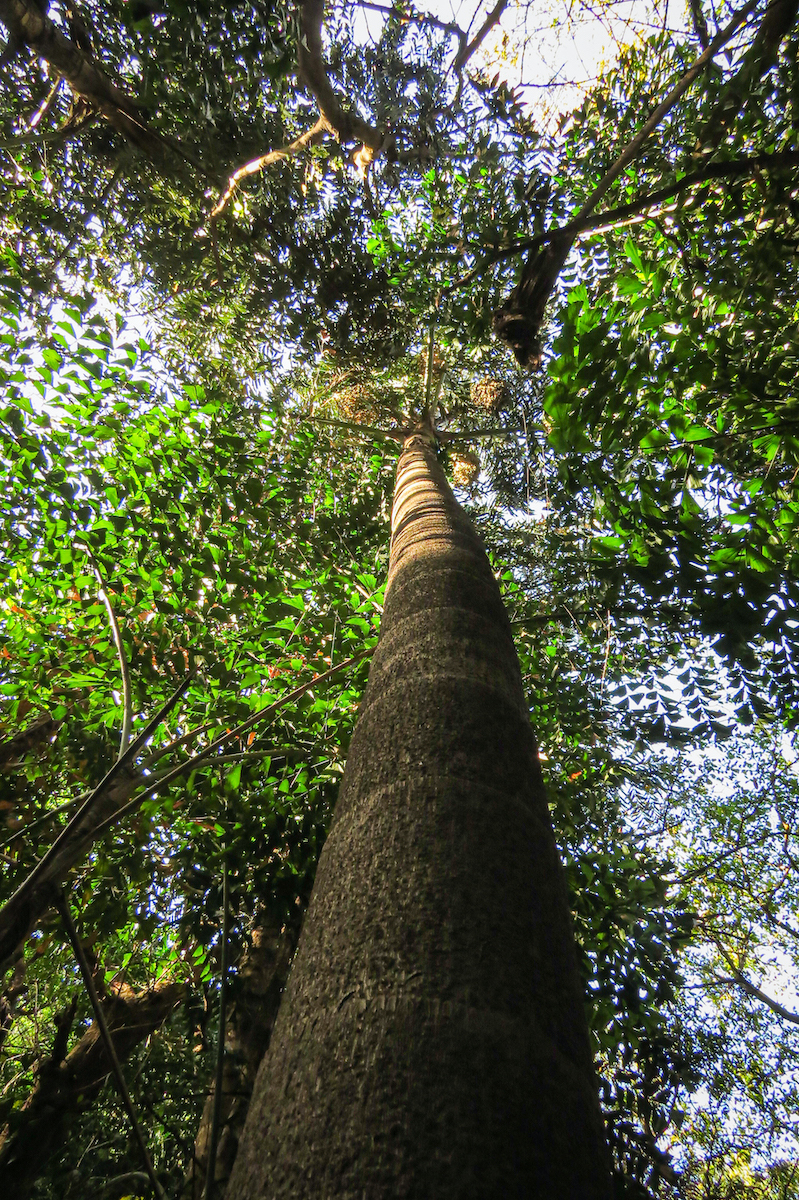 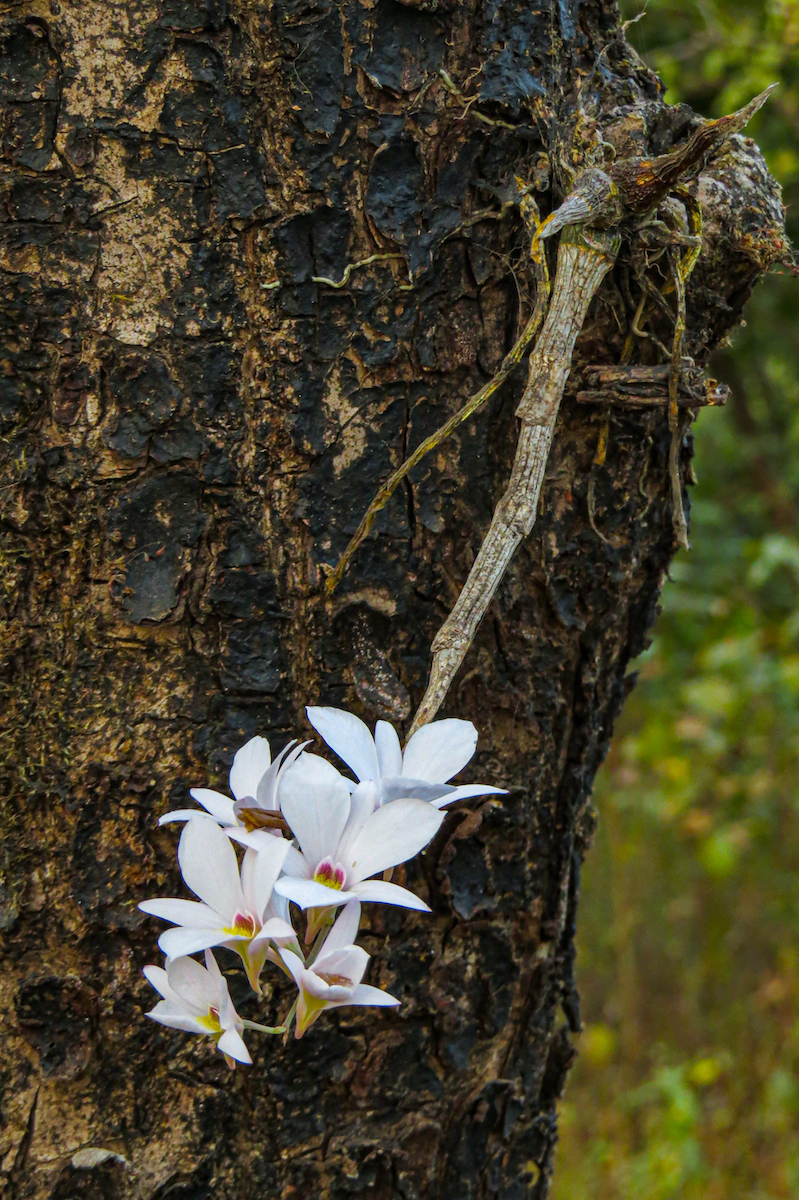 (Left) Despite the number of fishtail palms in Ajeevali, extraction of toddy is restricted due to the high level of skill involved in tapping toddy. (Right) The forest still holds other treasures, such as Dendrobium barbatulum, or the bearded lip orchid, named after the yellow, hair like growth on its lower petal. Photos: Peeyush Sekhsaria

Tapping season happens around October ever year, just after the monsoon, and the tappers set up a large tent amongst the palms, where they live until the season ends. As we were walking back, we happened to meet the local contractor, who invited us for a chat. He was accompanied by the tappers: lean men in shorts, with koytas — curved knives — dangling from their hips. They came from Sudhagad Pali and, I was told, could tap like “nobody else in the land”.

When I told them of my interest in all things wild, one of them showed us the earthen pots used to collect the toddy. I also learned that the toddy-tapping business had degenerated into drinking parties, attended by groups of men from neighbouring villages and towns, and even as far as Pune. Large quantities of food were cooked in the forest at this time, using wood sourced from the devraai.

Since the current contractor had taken over, old rules were put back in place: No hunting in the devraai, no clearing of vegetation. People were allowed to come to buy, but no drinking in the forest, other than some close associates who could drink a glassful, not more. Everybody had to carry their toddy down to the village.

A recently built kuccha road has eased access to the devraai, though it is best to park in the village at the base and trek up. The walk is beautiful and ensures minimal damage to the ecosystem. Photo: Vivek Kale

I told them that the Sahyadris, where we were, is one of the eight hottest hotspots of biodiversity in the world, with species that were not found anywhere else in the world. The group warmed up to me, and I learned that there were many other devraais in the region, but most are now gone. “Some decades back, charcoal was big business,” one of them said, “and villages were auctioning off their devraais to charcoal contractors. These men would come, cut down trees, and burn them to generate charcoal.”

I learned that the Talgaon devraai, not far from Ajeevali, once brimmed with life, but is now barren. “Even we, the people of Ajeevali had auctioned our devraai to a charcoal contractor,” he said, as everybody, including the contractor, tappers and village folk were listening in rapt attention. “This news somehow reached our village schoolteacher, Thorve, who refused to let this happen to Ajeevali’s devraai. He was just a village schoolteacher, but he alone saved this forest.”

Just as he wrapped up the story, a tapper came in with his morning’s harvest, and the reverie was broken. As we prepared to leave, the contractor offered us a glassful. “It is fresh, we don’t mix anything,” he said. “You are one of us, please drink with us.” So, we had a small plastic glass of fishtail palm toddy, more or less in silence, savouring the freshness, slight tang, and sweetness of the drink — and the beauty of Ajeevali devraai. 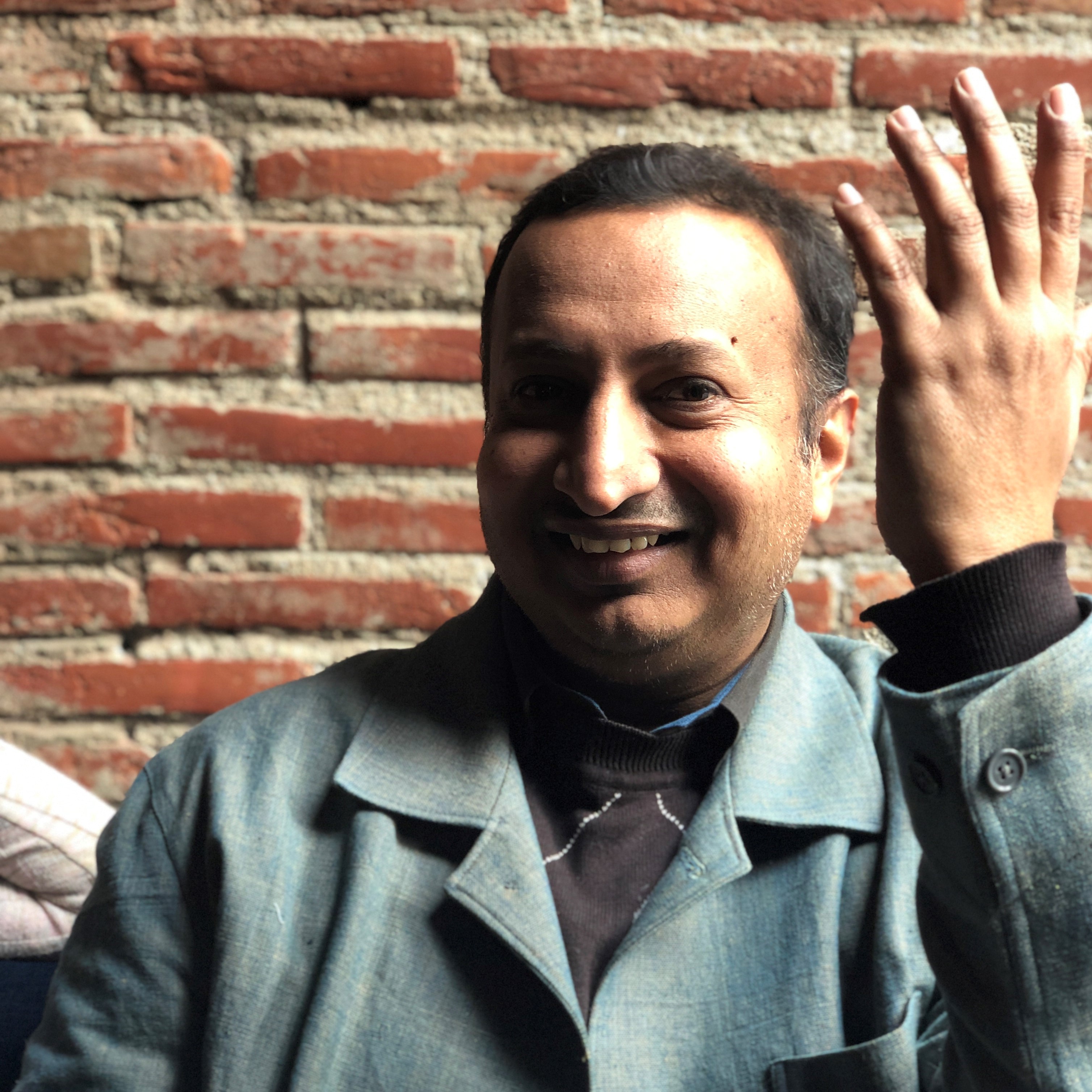 originally from Pune, is a Delhi-based development professional with an interest in birds, drawing and writing, more or less in that order.