At this charming high-altitude national park in West Bengal, the weather gods play a big role in creating an astounding diversity of flora and fauna

Creamy magnolias on bare trees radiated the sun’s last rays. I wished for the star-shaped flowers to continue to twinkle into the night. A pair of yellow-throated martens (Martes flavigula), one distinctly more golden than the other, foraged below the magnolia tree. The wary animals gambolled away as a sturdy, aluminium-bodied Land Rover trundled along the cobbled mountain road I was walking on within Singalila National Park. Singalila is a 78-sq-km park renowned for the trek route to Sandakphu that passes through it.

The early generation Land Rover was ferrying tourists down from Sandakphu, the highest peak in West Bengal, to Maneybhanjang town, gateway to Singalila National Park. These vehicles were once used by the British in the tea estates of Darjeeling.

Azure blue primulas lined the mountain road. Umbrella-shaped ferns hung from where the road had been cut from the mountain. Puddles left by light overnight showers glistened in the sun. Streams gently trickled down the mountainside.

A red-faced, indigo-blue kalij pheasant (Lophura leucomelanos) swiftly crossed the road. I could hear the sound of its footsteps on the leaf litter as it descended the valley. The wails of a satyr tragopan (Tragopan satyra) echoed across the valley shortly afterwards. 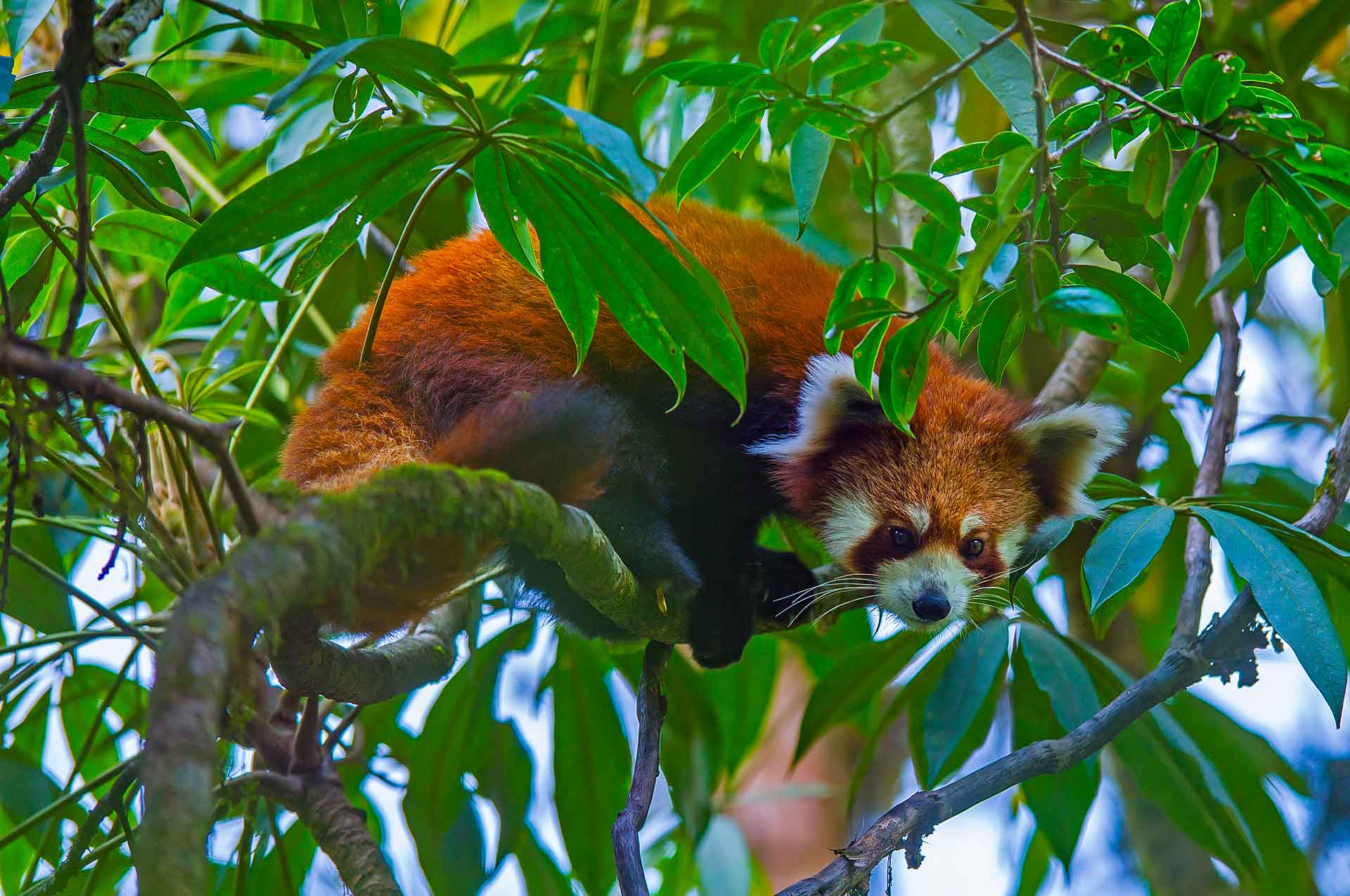 Singalila is one of the best places in India to see the elusive red panda. This high-altitude, temperate forest with bamboo understories is ideal habitat for the arboreal, cat-sized mammal. Cover photo: Singalila National Park is well known for the trek route passing through it to Sandakphu, the highest peak in West Bengal. The view of the Kanchenjunga massif from Sandakphu resembles a sleeping person and is popularly known as “The Sleeping Buddha”.

The Singalila Story
The Singalila area, located in the Darjeeling district of West Bengal, was purchased by the British government from the Sikkim Durbar in 1882 and notified as a reserve forest under the Indian Forest Act 1878. It was declared a wildlife sanctuary in 1986 and a national park in 1992, following which tourists were allowed. Flanked by Nepal in the west and Sikkim to the north, the national park encompasses a part of the Singalila Ridge, an extension of Kanchenjunga, the third-highest mountain in the world. The ridge separates the mountain ranges of West Bengal from other Himalayan ranges to its west.

At daybreak, the hot pink and red rhododendrons blooming in the valley in April stole the magnolia’s thunder. A lone shrub, whose vermillion flowers outnumbered its military green leaves, received the sun’s first rays at Kaiyakatta along the trek route.

Stunning Biodiversity
A fire-tailed sunbird (Aethopyga ignicauda), with an even redder tail, appeared moments later as if to compete with the sheer intensity of the rhododendron. Sunlight bounced off the red on its back and the yellow on its breast as it flitted about the branches searching for nectar.

The 18 species of rhododendron recorded in Singalila National Park offer a feast not just for sunbirds but a whole assembly of avians unique to the landscape. With more than 350 bird species recorded here, including some rare and difficult to spot, this popular destination in the Eastern Himalayas is highly sought by birdwatchers. 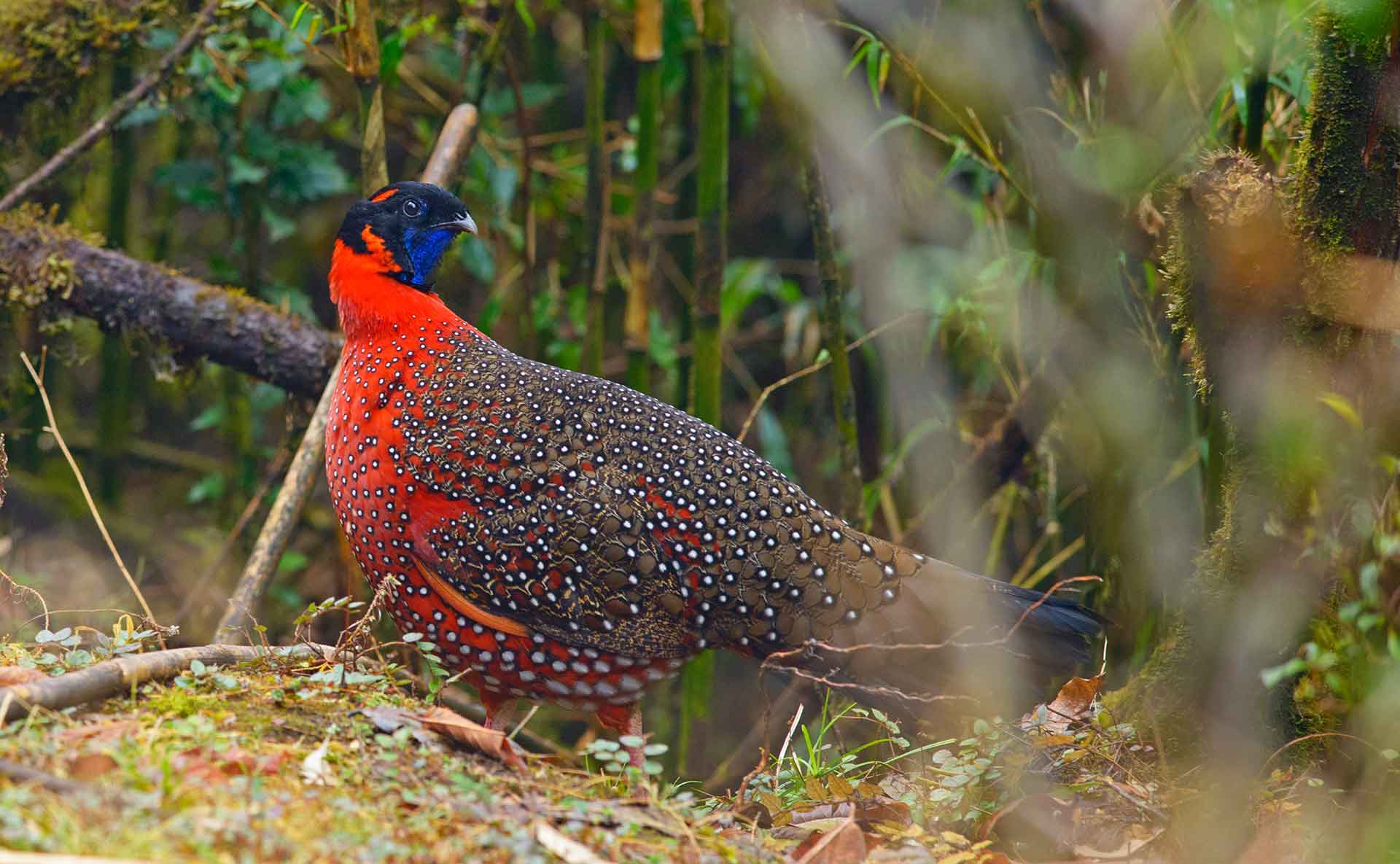 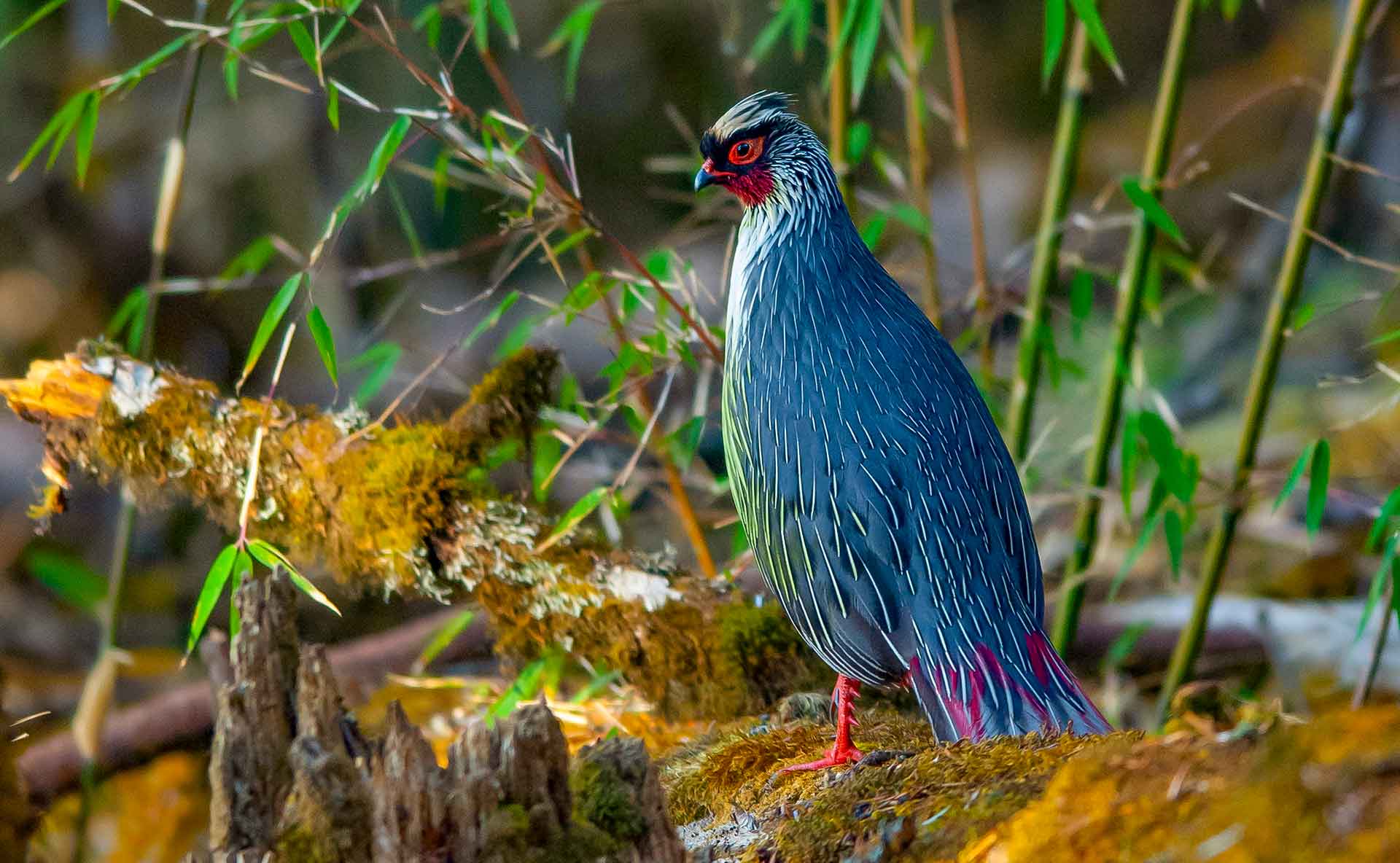 Over 350 bird species have been recorded in the national park, including rare pheasants such as the satyr tragopan (left) and blood pheasant (right).

Nestled among the towering oaks in the valley was a mountain-ash (Sorbus cuspidata) tree, bereft of leaves and fruits. Fresh droppings of a red panda (Ailurus fulgens) on a large branch of a nearby oak indicated that this was habre(bamboo-eater in Nepali) territory. In autumn, the arboreal mammal supplements its diet of bamboo leaves with Sorbus berries.

In India, the endangered red panda is found only in the Darjeeling district of West Bengal, Sikkim, and Arunachal Pradesh. Besides the panda, the park hosts other mammals such as Asiatic black bear, clouded leopard, leopard cat, serow, barking deer, yellow-throated marten, Chinese pangolin, Himalayan mouse hare, and wild boar. 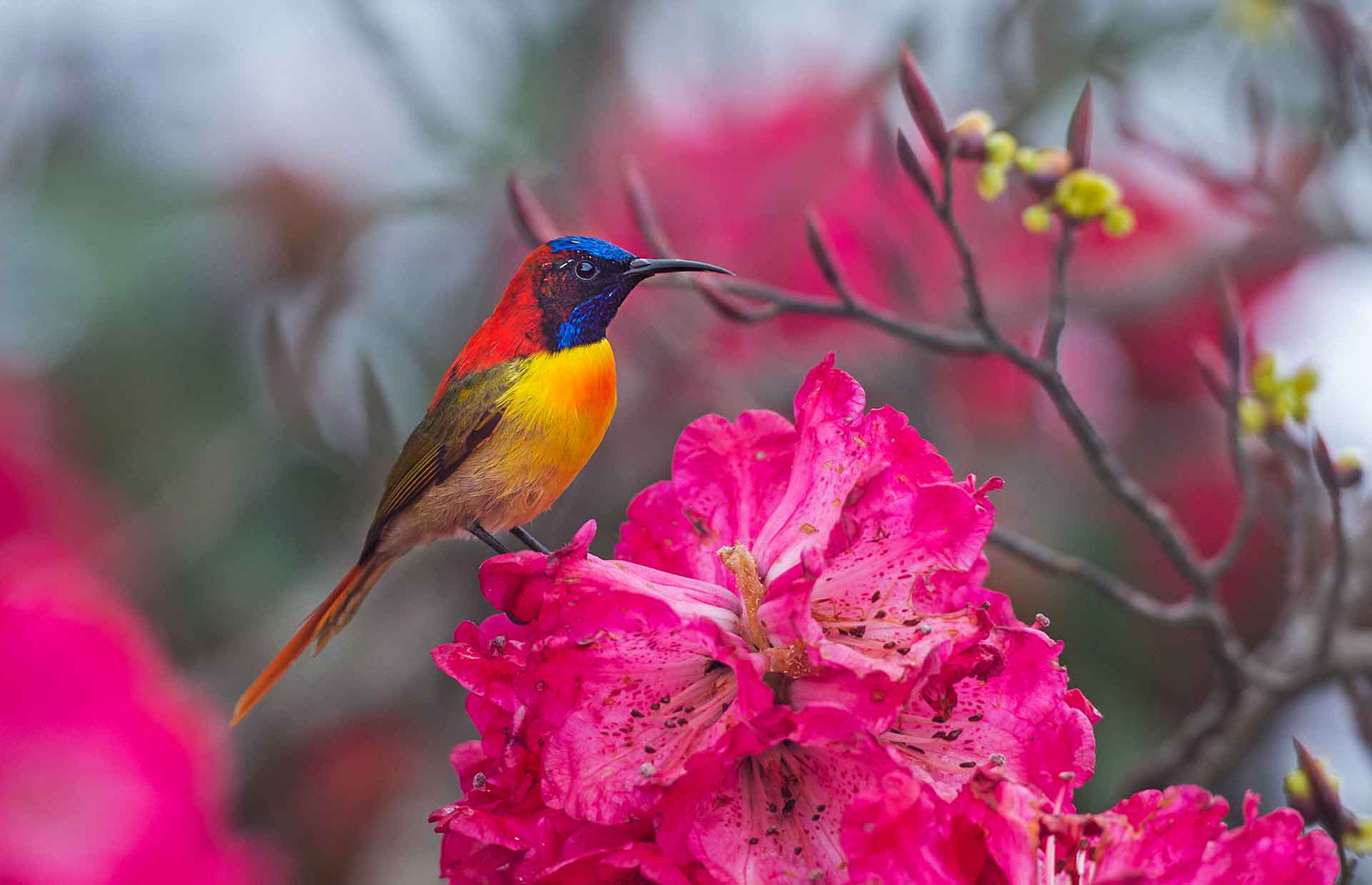 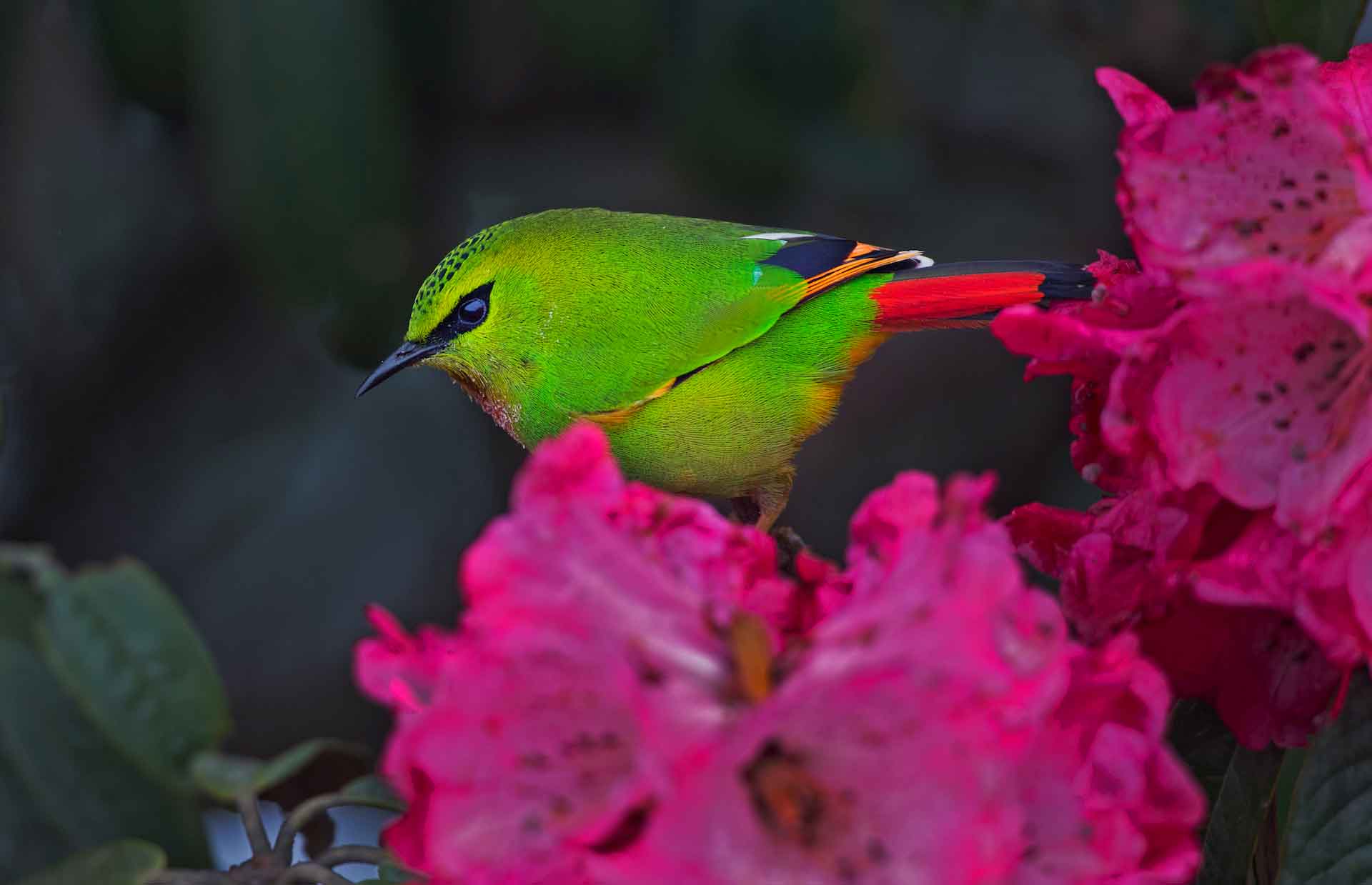 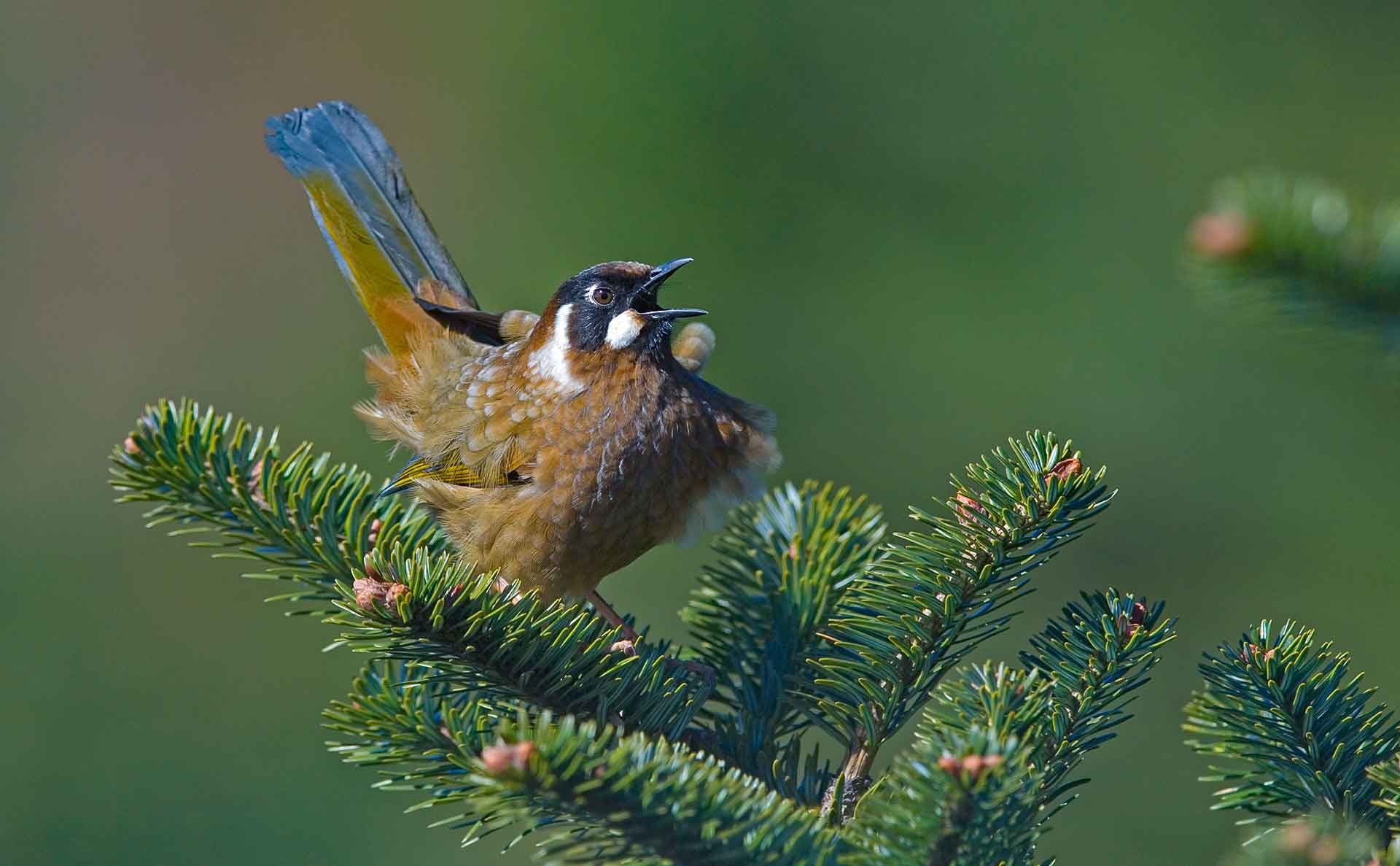 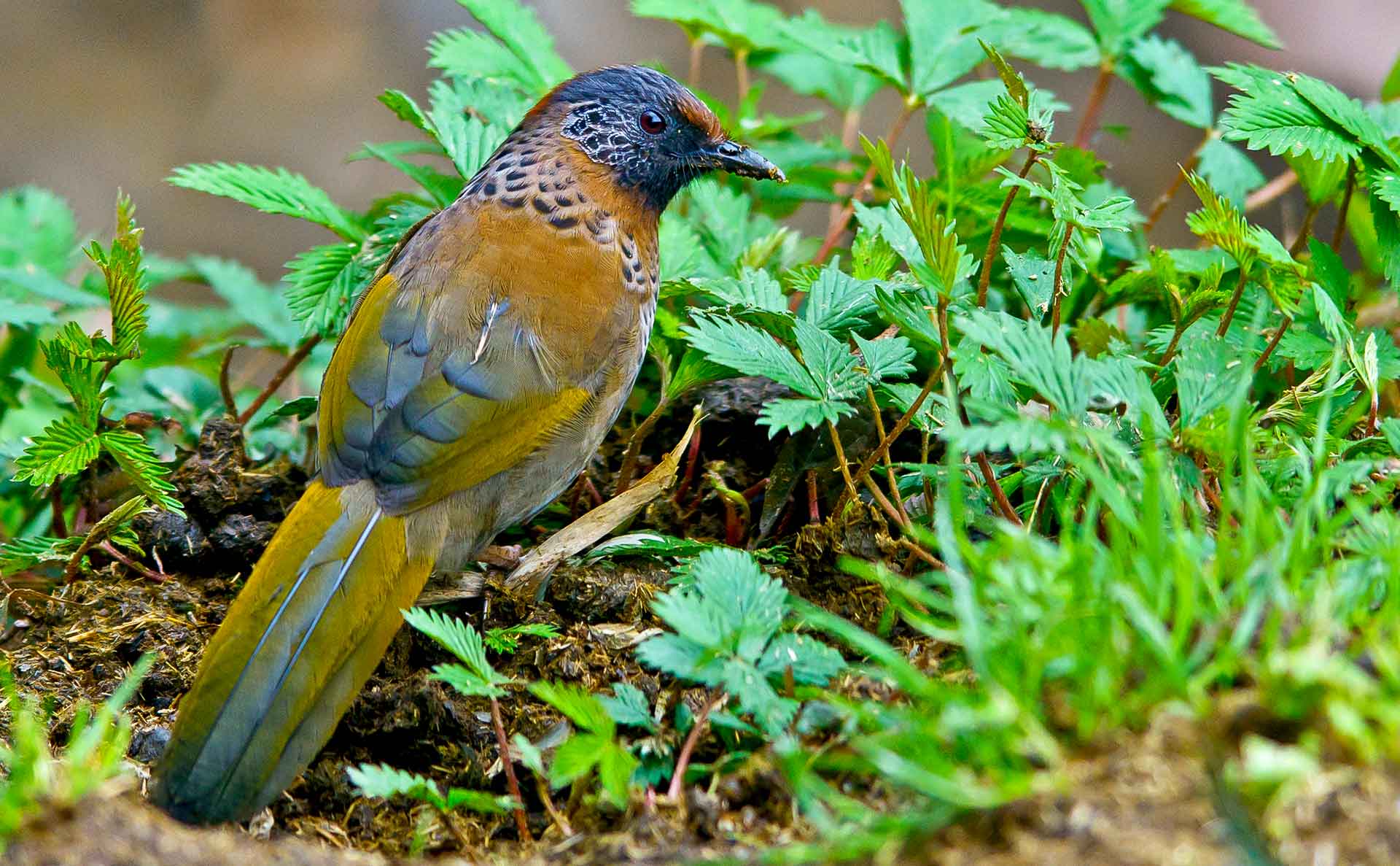 Tree cover
Looking over the mountainside, I saw some oaks erect while others were crooked and jutted out from strange angles. The abundance of lichens on the trees indicated the pristine air quality of these mountains.

Perched against the wind on top of an enormous oak, a Himalayan griffon (Gyps himalayensis) surveyed the valley. The raptor’s back and neck feathers fluttered in the wind as it preened itself. Unmovable, like the mighty oak it sat on, the vulture stayed on the tree’s summit for two straight days.

The temperate zone of the park (2,200 m to 3,150 m) comprises oaks, beech interspersed predominantly with magnolia, michelia, maple, mountain-ash, and rhododendron with an understorey of bamboo.

Higher up in the subalpine zone (3,150 m to 3,630 m), conifers such as silver fir, pine, hemlock and birch replace the broadleaved trees.

Mountain top
A patch of pines welcomed a flock of red crossbills (Loxia curvirostra) at the summit of Sandakphu, a mountain located at the west-central edge of the national park. A few brick-red males kept a lookout from the top of the trees as the others fed on pine seeds. After satiating themselves, they laid claim to a mountain path to deftly gather grit with their twisted bills, a habit that aids in digesting the seeds.

On a clear day, the summit of Sandakphu (3,630 m) offers a view of four of the five highest peaks in the world — Everest (8,849 m), Kangchenjunga (8,586 m), Lhotse (8,516 m) and Makalu (8,481 m). Running from northwestern West Bengal through Sikkim, the Singalila Ridge used to be a regular route for expeditions to Kanchenjunga. In 1955, Tenzing Norgay felicitated the first Kanchenjunga summiteers on their return from the mountain at Sandakphu. 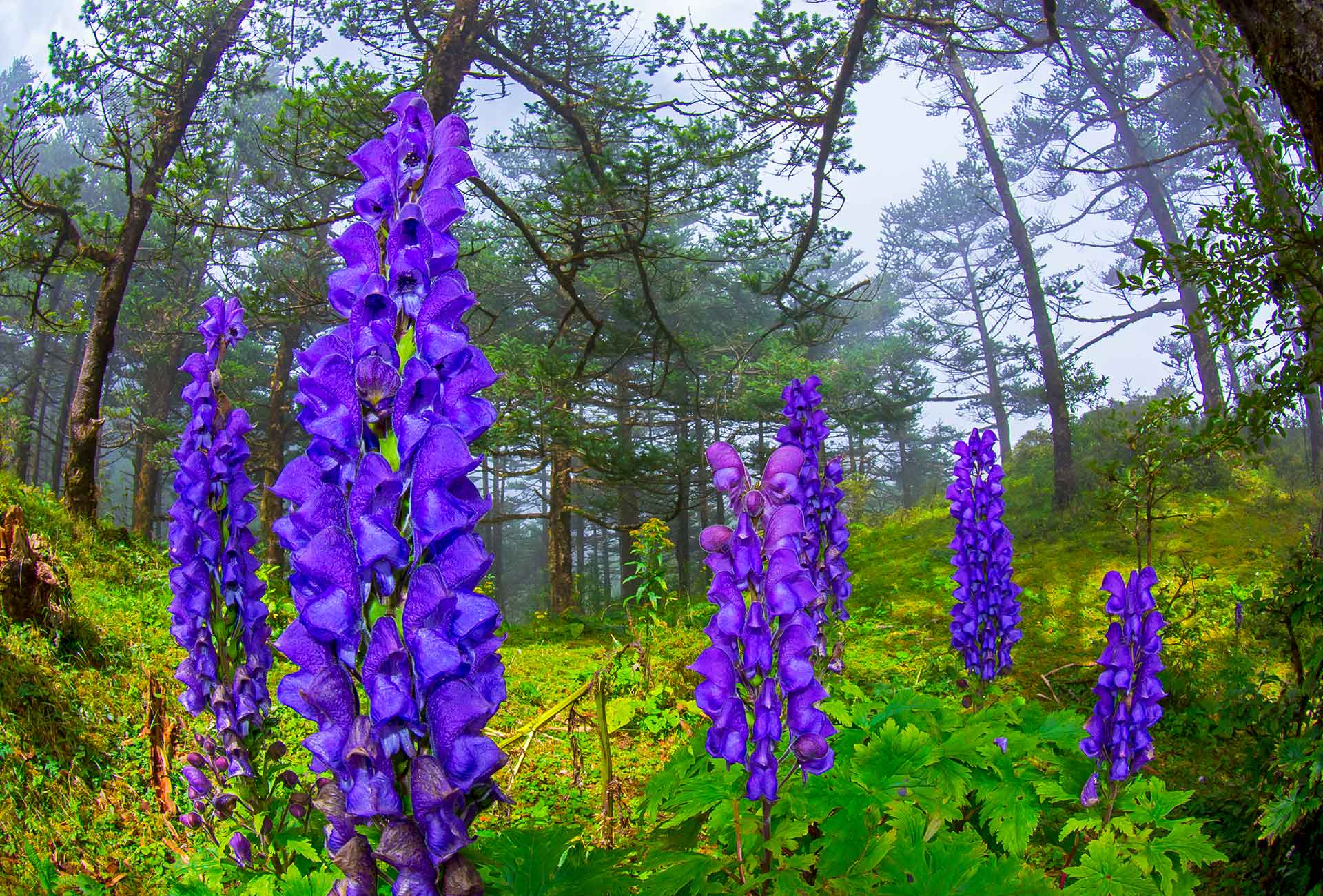 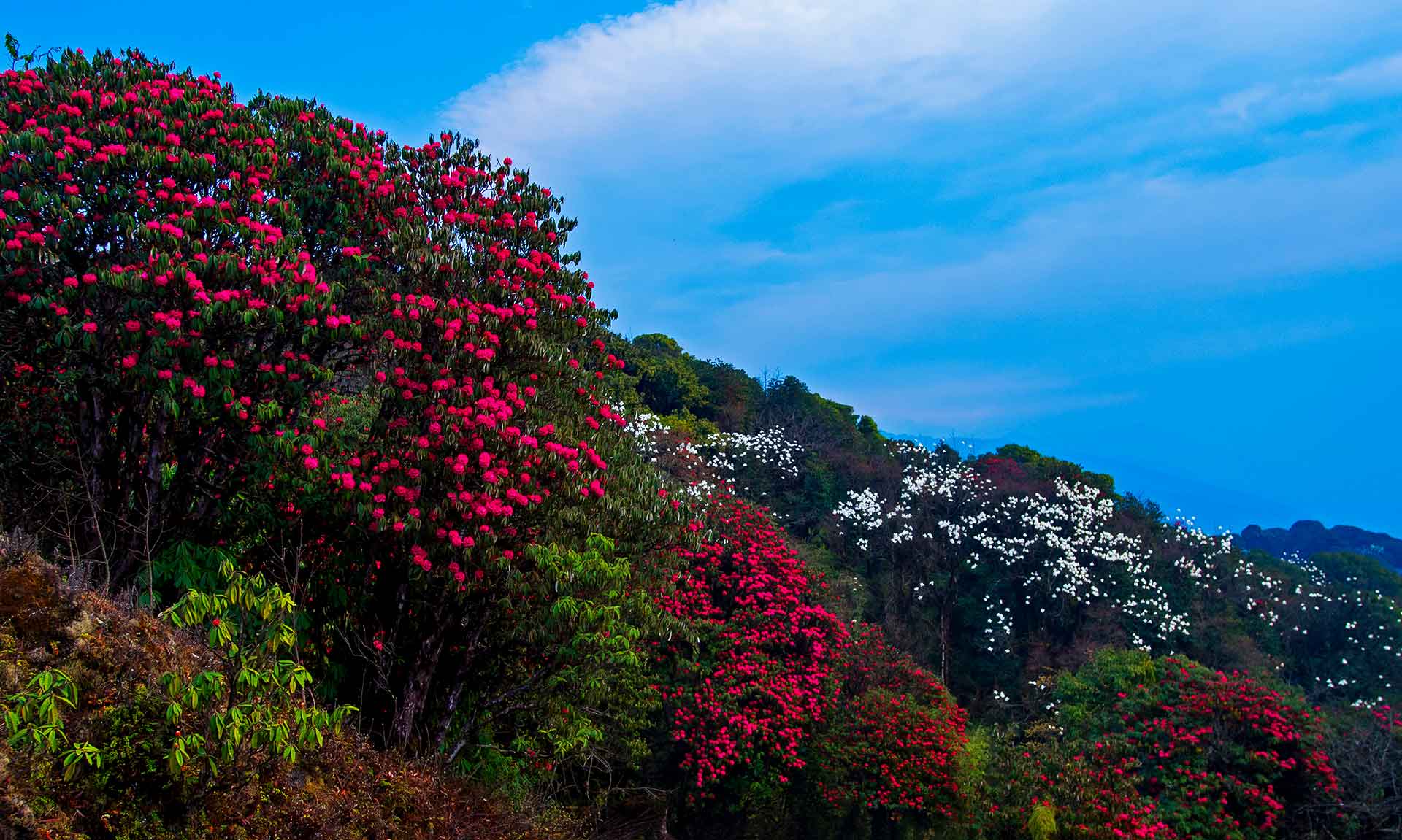 (Top) Rich in plant life, the Darjeeling Himalayas is estimated to have around 2,900 species of flowering plants. Singalila National Park has many flowering plants that grow close to the ground; of these, aconites (seen here), primulas, asters, geraniums, cotoneasters, arisaema, and meconpsis are prominent. (Above) The national park has 18 recorded species of rhododendrons. Their bright red and pink hues stand in stark contrast to the white magnolias when they bloom in March-April.

A sudden chill gripped the air as clouds drifted over the mountains. Clumps of bamboo swayed with the wind. The oak trees were draped with moss thick enough to cushion a human punch, creating an enchanted forest. A nudge allowed pieces of damp bark to fall from an ancient oak tree like scabs from a healed wound.

Ladybugs crawled on my pants as I settled down to rest my back against a tree after a short hike. They navigated the contours of my pants and whizzed off like miniature helicopters when I moved my legs.

Clear skies in the morning, mist in the afternoon, followed by hail and rain in the evening – the April weather in Singalila is as unpredictable as a sighting of the red panda. A gamut of such microclimates supports a rich diversity of life forms in these mountains.

In the middle of the night, I woke up to the sound of waves crashing against a beach. Puzzled, I peered out of the window to see a yellow-billed blue magpie (Urocissa flavirostris) giving me the side-eye from the balustrade as I lay wrapped under my blanket. I realised that the source of the sound was the wind lashing against the tin roof of my homestay. Reassured by the presence of the Himalayan bird and relieved that I had not been transported from an altitude of 2,795 m to sea level in the middle of the night, I went back to sleep after scanning the valley for twinkling magnolias.