The Ecotone: The Todgarh-Raoli and Kumbhalgarh Sanctuaries of Rajasthan

Between the hilly forests of the Aravallis and the arid Thar desert, two little-known wildlife sanctuaries harbour a wide variety of flora and fauna

“February 5, 1953: …. was very lucky to shoot two tigers in one shot. Killing them both stone dead on the spot with a 470 soft nose bullet. A very rare occurrence,” wrote Keshav Sen in the guestbook maintained at the Raoli forest rest house in Rajasthan. A sports shooter who represented India in the trap event at the 1960 Summer Olympics and a scion of the royal family of Kharwa in Ajmer, Sen’s entries about the tigers, leopards, waterfowl, crocodiles, and other animals he shot in the forests of Todgarh, Beawar, and Satukhera in the 1940s and 50s are precise.

While tigers disappeared from this landscape in the late 1960s, leopards are still found in the Todgarh-Raoli Wildlife Sanctuary, which was established in 1983. Named after lieutenant-colonel James Tod, an English-born officer of the British East India Company and author of the seminal book Annals and Antiquities of Rajast’han, the 463 sq km sanctuary is spread across the Ajmer, Pali, and Rajsamand districts of the state.

The rocky terrain of the Kumbhalgarh Wildlife Sanctuary provides ideal hiding spots for mammals such as hyenas and leopards. Photo: Anirudh Nair Cover: A short hike up to the Mangatji Maharaj Temple located within the precincts of the Todgarh-Raoli Wildlife Sanctuary in central Rajasthan presents a spectacular view of the oldest mountain range in India — the Aravallis. Cover Photo: Anirudh Nair

Faunal biodiversity
According to the wildlife census carried out in 2020, an estimated 39 leopards, 60 sloth bears, 50 hyenas, and 110 sambar roam the undulating terrain of this sanctuary located on the Aravalli Hills of central Rajasthan. Wild boar, civets, porcupines, langurs, nilgai are also found throughout its four ranges — Raoli, Jojawar, Devgarh, and Bijaguda. A study of the diversity and status of avifauna carried out in 2013 recorded 143 species of birds in Raoli-Todgarh and 201 in Kumbhalgarh Wildlife Sanctuary, which adjoins its southern periphery.

With an estimated population of 136 leopards, 220 sloth bears, 141 hyenas and 343 sambar, the 608 sq km Kumbhalgarh Wildlife Sanctuary ranging across Udaipur, Rajsamand, and Pali districts is relatively more frequented by tourists. Indian wolves, golden jackals, four-horned antelopes, Indian pangolins, rusty-spotted cats, honey badgers, and rock pythons are also found in this landscape. Once popular as a hunting ground for royals of the region, the sanctuary, which was afforded protection in 1971, also serves as the last distribution point in northwest India for species such as the grey jungle fowl and teak among others.

Once known for its sizeable population of wolves, Kumbhalgarh’s apex predator is the leopard. “Competition with leopards has pushed wolves to the periphery of the sanctuary, but still a small population can be seen in the Joba area,” says ecologist Dr Sumit Dookia.

Dug-up termite nests along trails in the forest give away the presence of sloth bears. Along with termites and ants, the bears also feed on fruits and are good dispersers of seeds. 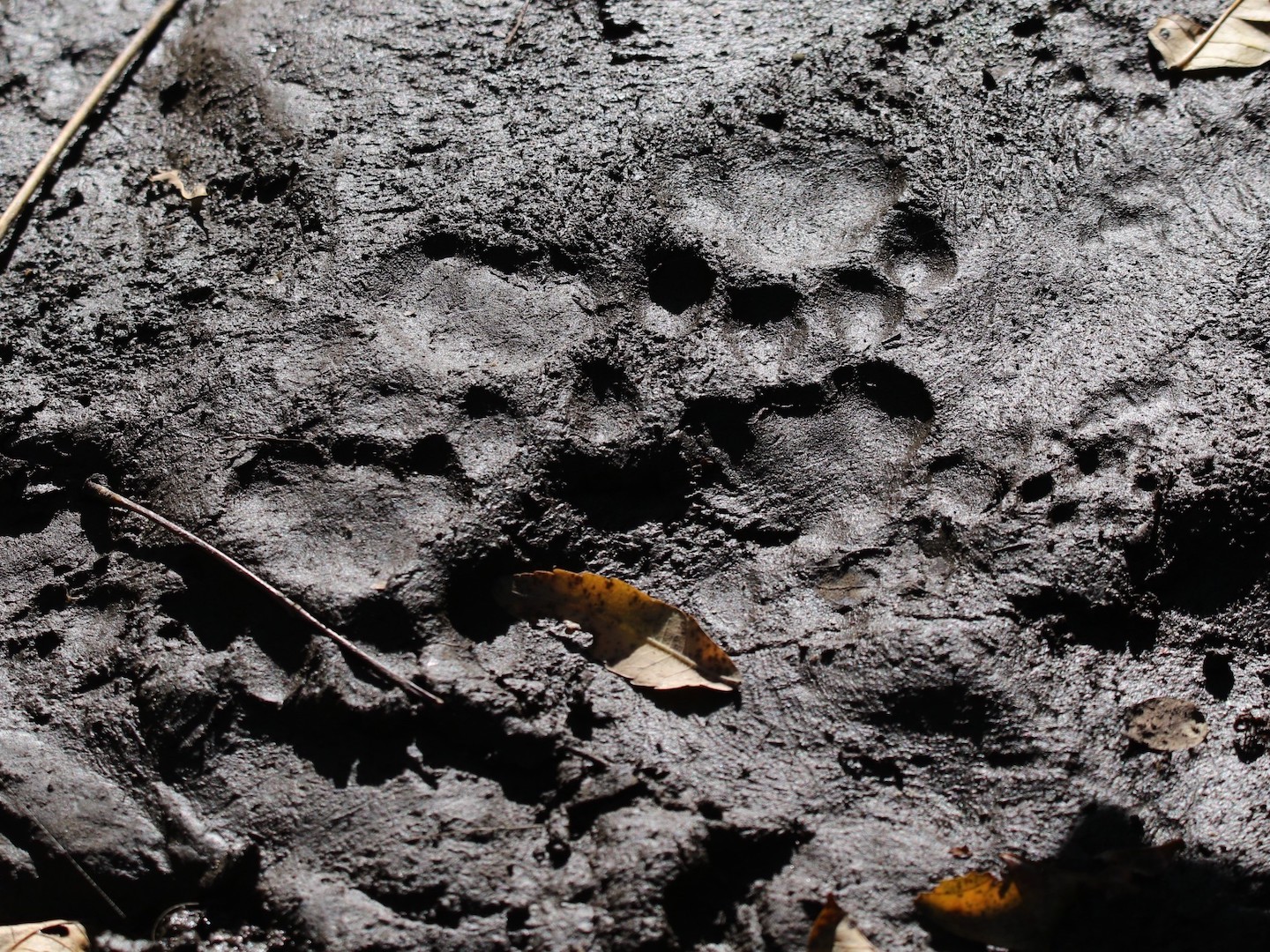 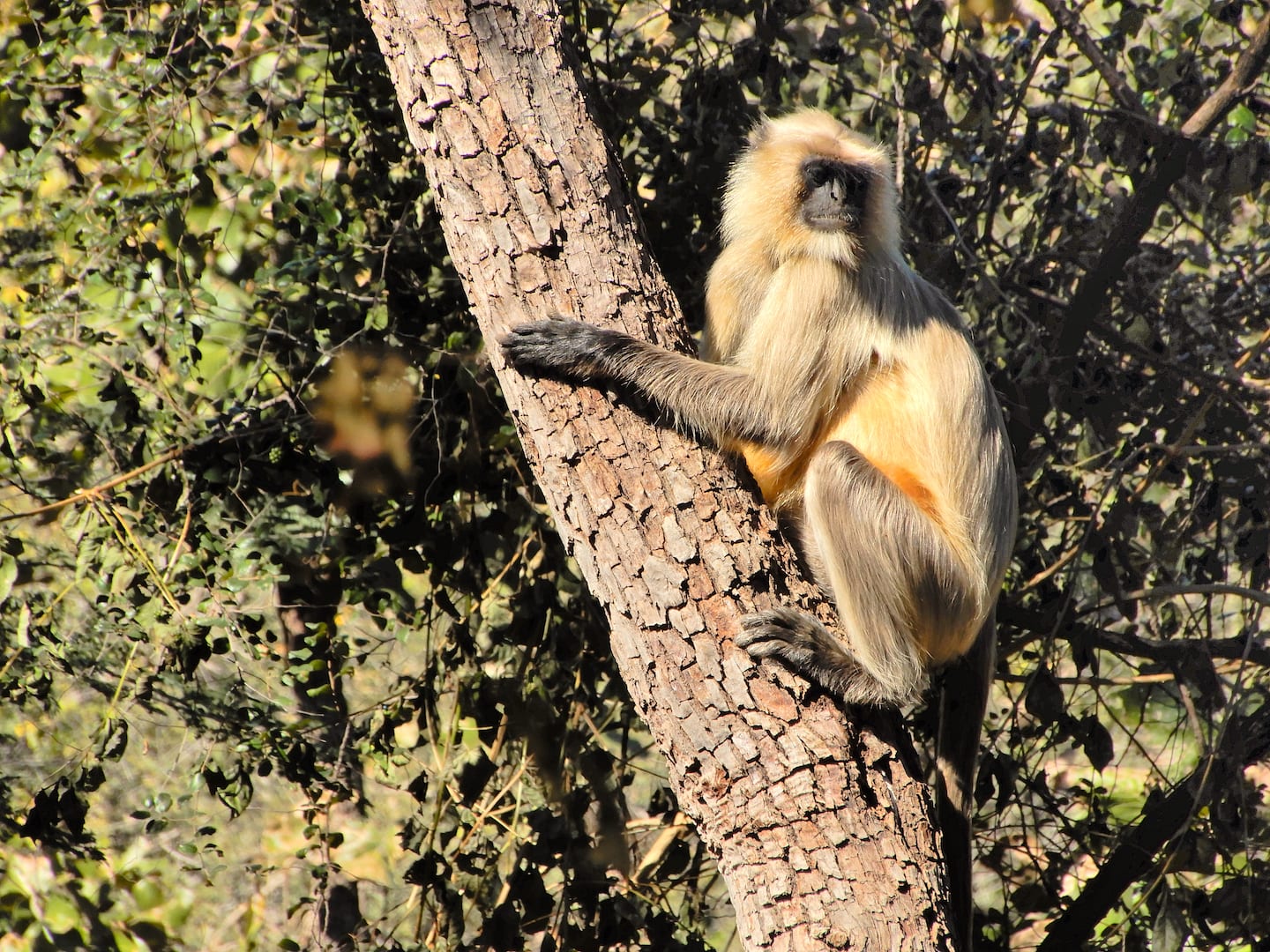 Sighting a leopard (top), the apex predator of this landscape, is a matter of pure luck, but visitors will certainly experience the tell-tale signs (above left) it leaves behind. If a predator like the leopard is nearby, the Northern plains langur (above right) will be among the first to raise an alarm. Photos: Bheru Bishnoi (top), Rohit Kumar (above left), Anirudh Nair (above right)

The Ecotone
Together, the two sanctuaries form an ecotone, a region of transition between the hilly forests of the Aravallis and the Thar desert. Their hills act as an impediment, checking the eastward expansion of the desert located towards the northwest. This barrier also ensures that southern Rajasthan receives more rainfall than other regions in the state.

“Salar trees (Boswellia serrata) are known as the soldiers of the Aravallis. They stand in line along the upper ridges of these hills, creating an impression that they are standing in guard against the onward expansion of the desert,” says botanist Dr Amit Kotia.

“In the monsoon the dhavda’s leaves are green, in the winter they’re reddish-pink, and in summer they are brown. The colour of the landscape changes as the dhavda changes it colour with the season,” Dr Kotia tells me.

Though water is scarce during the summer when temperatures reach over 40 degrees Celsius, the hills of these forests function as a catchment area during the monsoon. Many streams and rivers that originate in the hills, flow through the plains towards the south before ultimately joining the Luni river. When rainfall is enough, wetlands dot the landscape inviting aquatic birds. The forest department has built check dams throughout the two sanctuaries to overcome the water scarcity faced during most parts of the year. 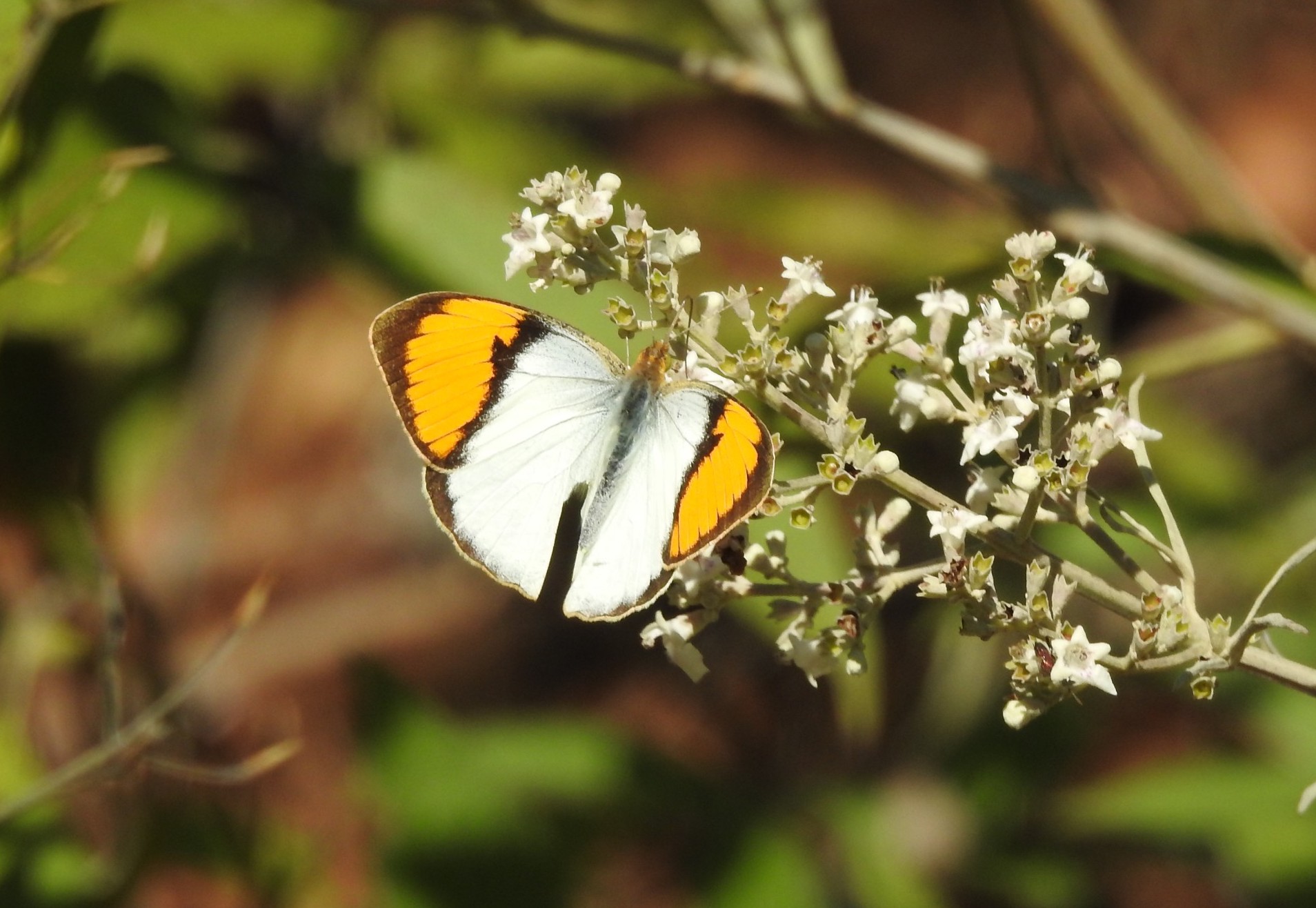 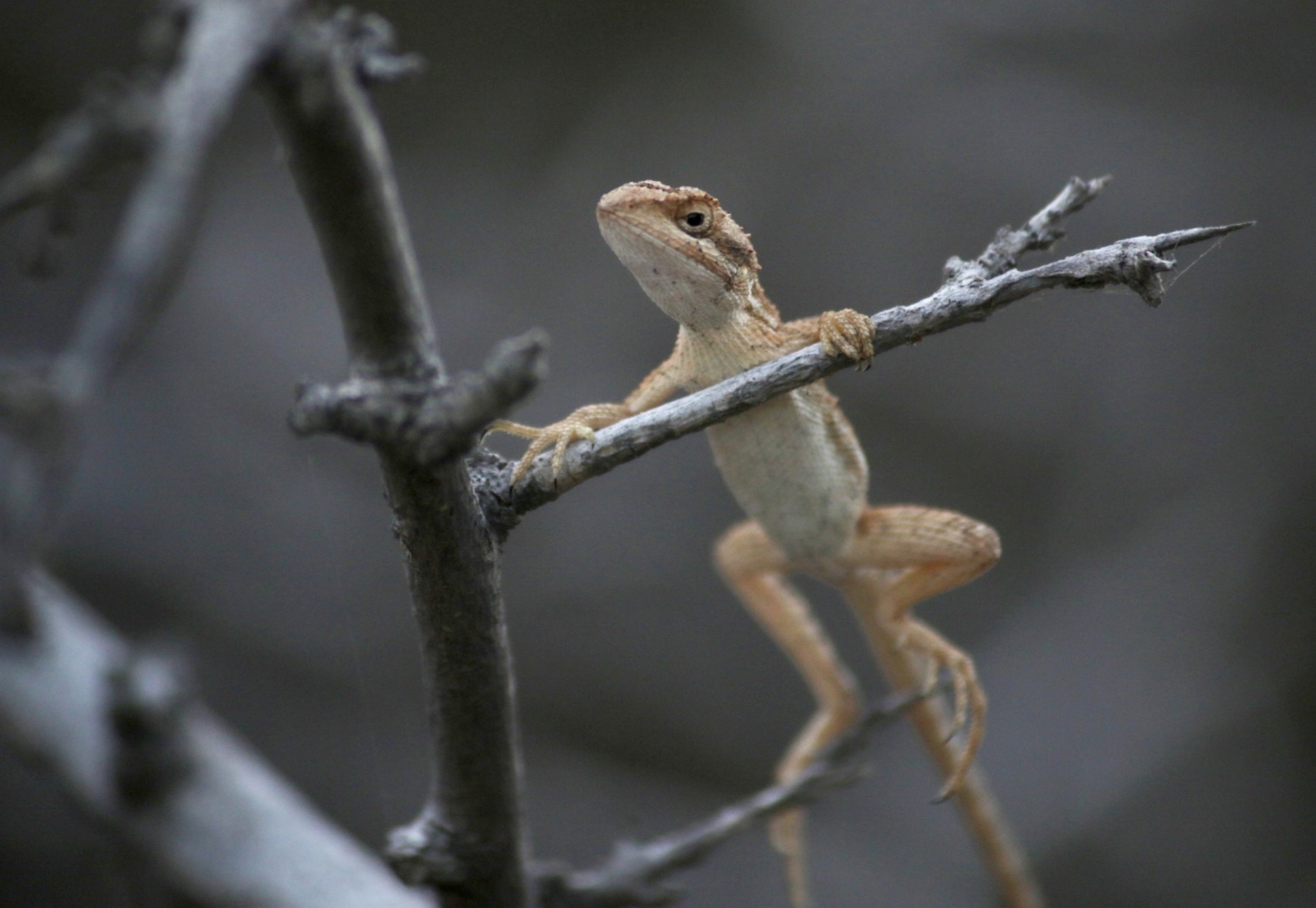 Threats to the sanctuary ecosystem
In Todgarh-Raoli, there are 12 villages within the sanctuary, while there is one in Kumbhalgarh. Degradation of the habitat due to overgrazing by livestock, cutting of trees for fuelwood, and lopping for fodder, along with the rise of invasive plant species such as Lantana camara are some of the critical concerns facing the two sanctuaries.

Abhinav Bharti, a forest guard posted at the Raoli range, discloses that no other threat is as severe as the one posed by grazing livestock within the sanctuary. “Wild animals are disturbed due to the movement of goats, sheep, and buffalos and their natural behaviour is affected. Herbivores are forced to compete with livestock for grass as well. The forest department has built 50-100-hectare enclosures within the sanctuaries in order to regenerate vegetation, but disallowing grazing is really the need of the hour,” he says.

“Relocating the villages outside the sanctuary will reduce the human pressures on the forest, but villagers aren’t keen to move because they do not face much conflict with wild animals,” he adds.

Found extensively along the periphery of the sanctuary, Lantana camara is increasingly invading within as well. Its invasion is another challenge that an understaffed Forest Department must contend with.

(Left) Abrus precatorius or the jequirity bean is best known for its brightly coloured, toxic seeds. Locally known as the “chirmi”, the plant is associated with a traditional Rajasthani folk song and its seeds were formerly used to weigh gold. (Right) Human settlements within the two sanctuaries, coupled with livestock grazing, adversely affect the movement patterns of wildlife. Photos: Dr Sumit Dookia (left), Anirudh Nair (right)

In medieval times, Kumbhalgarh served as the dividing line between Mewar and Marwar states. Always at odds, legend has it that the two states resolved their territorial dispute once and for all by signing the aanval-banwal ki sandhi (the treaty of aanval-banwal). The treaty signed between Rana Kumbha, ruler of Mewar, and Rao Jodha, ruler of Mandore, said, “where there is aanwal (Indian gooseberry), there will be Mewar, and where there is banwal (babul), there will be Marwar”.

Discovering such tales marrying local biodiversity and the rich history of the state is just one of the reasons that beckon one to the twin sanctuaries of Raoli-Todgarh and Kumbhalgarh in Rajasthan.