Woodpeckers are like engineers who regularly construct tree cavities of all sizes. These become potential dwellings for a diverse set of creatures from bees to birds, mammals, and reptiles 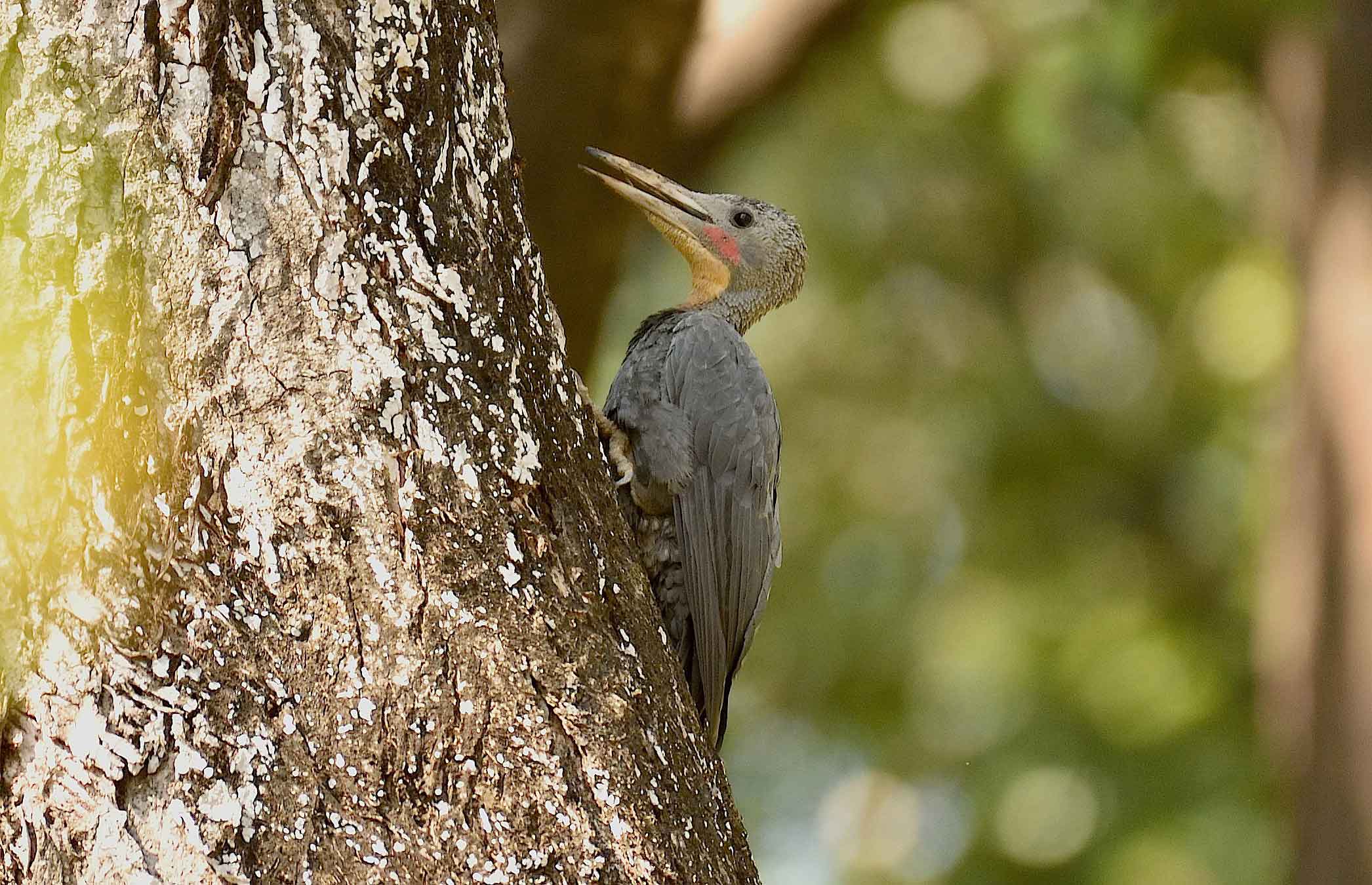 None of us saw it arrive. While Taukeer and I were deeply engrossed in watching the tree hole for any action, Bashir, who was on watch, must have drifted off for a few seconds. A huge tusker stood between us and our field vehicle — our passport to safety was blocked. The gravity of the situation triggered a primal survival instinct, which metamorphosed me from a slowpoke to a nimble creature sprinting through the dense forest, leaping over obstacles like a steeplechase athlete. Our observation session was abruptly adjourned for the day.

Such experiences punctuated our fieldwork in the sal forests of Uttarakhand, where my field colleagues and I spent four summers studying woodpeckers. While the Himalayan foothills house a phenomenal variety of woodpeckers (over 15 species), our main interest was to study nesting in the globally threatened great slaty woodpecker (Mulleripicus pulverulentus). This bird, measuring 50 cm from beak to tail, ranks among the world’s largest woodpeckers. We were particularly interested in the cavities it makes in tree trunks.

Almost all woodpeckers possess the ability to drill holes in trees. This quality makes them critically important in forest ecosystems, as many animals depend on tree holes for breeding and seeking refuge. Cavities protect young ones from predators and the elements, which increases their chances of survival in a world fraught with uncertainties. However, most animals lack the wherewithal to make cavities themselves. While many use natural tree cavities, those engineered by woodpeckers (and barbets) are deemed safer in that they have a “standard” design and a narrow entrance. It’s no wonder that so many birds, mammals, reptiles, and arthropods widely use woodpecker cavities to get by in life.

The greater yellownape woodpecker is a brightly coloured bird that is found mostly in hilly, forested areas. Photo: Dhritiman Mukherjee Cover Photo: The great slaty woodpecker, among the world’s largest woodpeckers, thrives in undisturbed hilly forests with an abundance of large trees. Its loud call and distinct hammering on tree trunks often give away its location. Cover Photo: Sanjay Sondhi

Woodpeckers have evolved several physical adaptations perfectly suited for drilling holes in trees. Their sturdy, sharp beaks function like chisels that can efficiently perforate the toughest of timbers. The toes on a woodpecker’s foot are arranged with two pointing forward and two backwards, thereby providing excellent traction while perching on tree trunks. Stiff tail feathers, when propped against the trunk, provide additional leverage during hammering on wood. Even the woodpecker’s brain has an unusually dense grey matter, which is protected against high-impact forces generated during vigorous “head-banging”.

Drilling tree cavities is hard work, even for woodpeckers, who are equipped with appropriate excavation tools. It may take weeks of artisanship to carve out a nest hole. While a woodpecker will try to reuse a nest hole that it made during the previous breeding season, it is often unable to do so, as it is highly probable that another user has already occupied it. Hence, the woodpecker usually ends up having to construct a new nest cavity every year.

But nest holes are not the only cavities that woodpeckers construct. They also build roosting cavities to sleep in. What’s more, a woodpecker maintains several roost holes simultaneously for safety. Hence, over its lifetime, a single woodpecker may end up drilling dozens of cavities. And all these holes add up to serve as potential homes or refugia for the many cavity-dependent species. Large-sized woodpeckers, such as the great slaty, are even more important because they naturally build bigger cavities that can support larger-bodied, ecologically critical species such as hornbills. 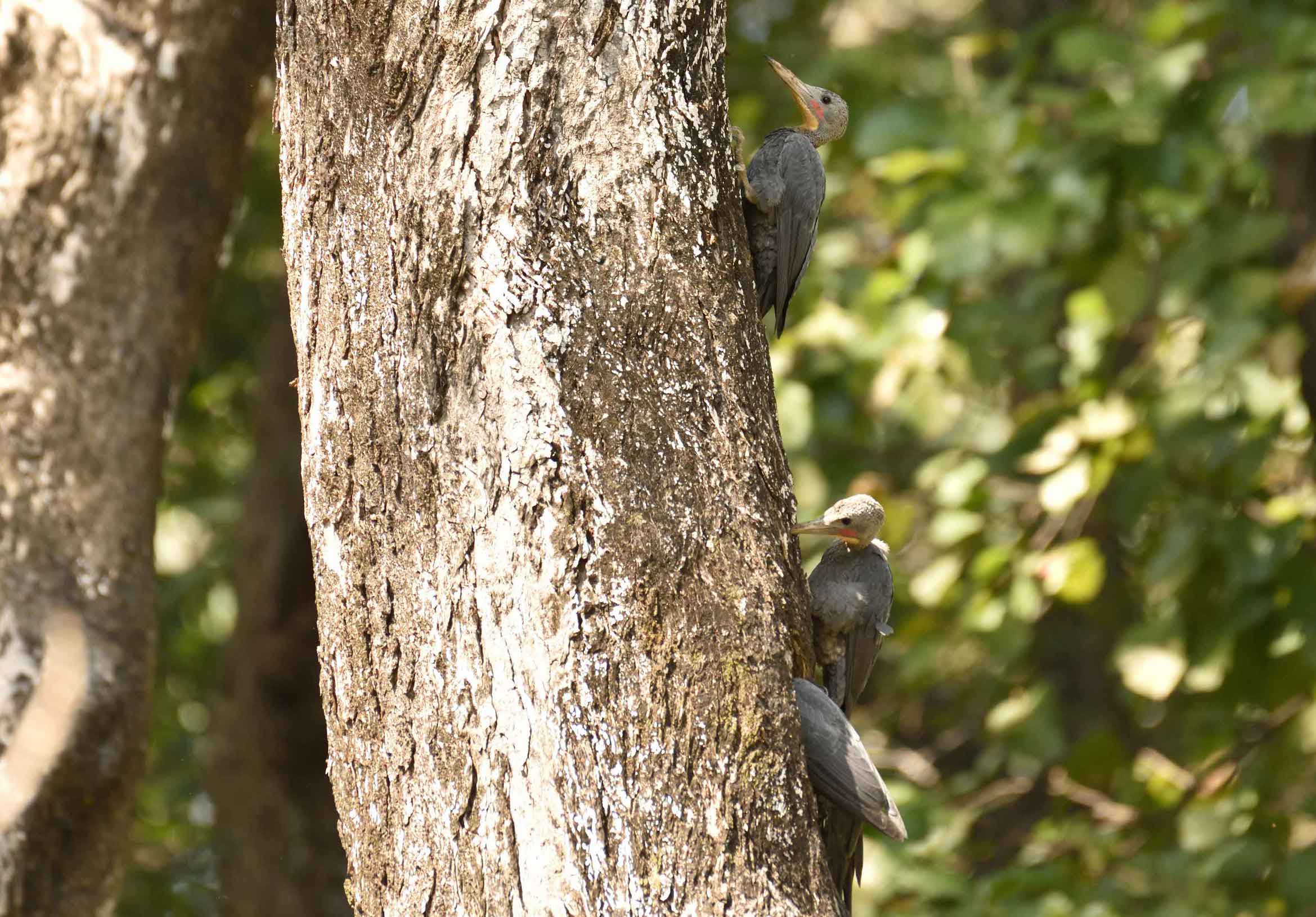 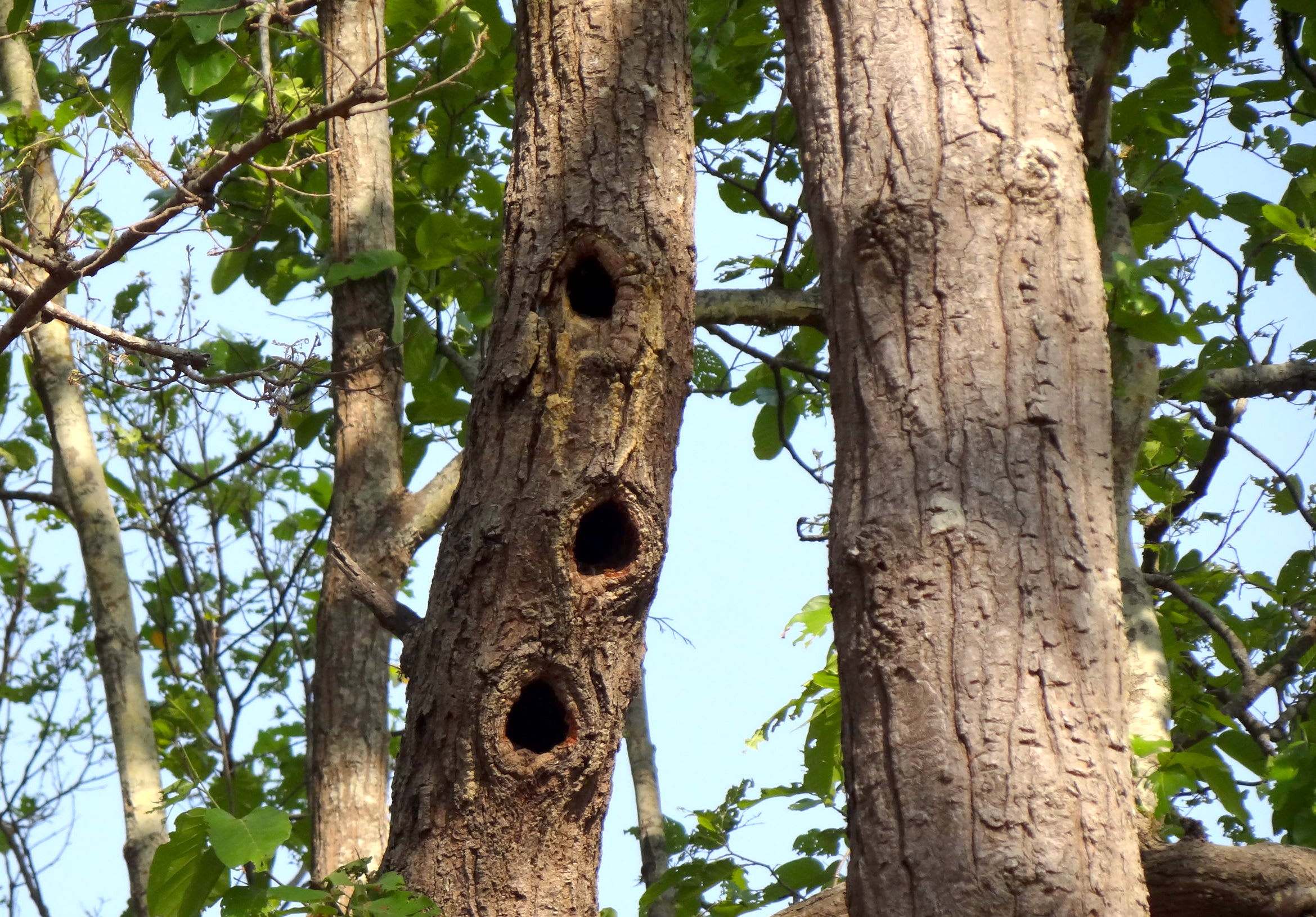 Great slaty woodpeckers travel in family flocks of 3-12 individuals and often build multiple cavities in a vertical formation on trees. Members of the flock help in excavating a single cavity that a breeding pair may occupy. Photos: Sanjay Sondhi (left), Raman Kumar (right)

We realised that woodpecker cavities are prime real estate and are in high demand among forest-dwelling creatures. While abandoned cavities are the first to be taken, even active cavities are not spared by aggressive squatters who oust builders. During fieldwork, we caught a glimpse of various tactics — opportunism, stealth, harassment or bullying — employed by animals to secure possession of this limited resource. One such incident had so much drama in the story that we began referring to it as “Khosla Ka Ghosla” after the satirical comedy movie based on the tussle between rightful owners and the property mafia over a plot of land.

This memorable episode transpired during the summer of 2017 during our fieldwork in the forests of Lansdowne. After months of searching, we had finally managed to locate an active nest hole in a sal tree, where a pair of great slaty woodpeckers were drilling a hole. The breeding pair’s nest-building bouts were usually punctuated with short intervals when they left the “construction site” to find food. One day, when the woodpeckers had gone off to forage, we noticed a pair of common mynas getting nosy. Not only did they enter the cavity, but they also had the audacity to start building their own nest inside.

The following day we found the woodpeckers excavating a fresh cavity in a nearby tree, apparently having relinquished claim to the mynas, who sat smugly in the encroached cavity. Somewhat disappointed, we labelled the nest as a failed attempt on our data sheets and moved to another area to search for woodpecker nests afresh.

However, the final twist in the drama was still to come. A couple of days after the hostile takeover by mynas, we happened to pass by the same tree. To our surprise, we found that the great slaties had reclaimed the much-contested cavity! They had already laid eggs and were incubating them. By the end of the season, the woodpeckers had successfully added three new members to their clan. It was poetic justice and a happy ending, just like in the movie.

During our time spent in the forests, we saw a diverse array of creatures, including hornbills, rollers, parakeets, owls, flying squirrels, and monitor lizards using great slaty woodpecker holes. The woodpecker’s role became even more impressive upon considering that there are more than a dozen different woodpeckers (from the sparrow-sized speckled piculet to the crow-sized great slaty) living in the sal forests. Hence, the woodpecker community functions like an outfit of engineers, regularly constructing tree cavities of all sizes that eventually translate into potential dwellings for a diverse set of creatures that includes bees, snakes, bats, civets, squirrels, and scores of birds.

What’s more, in a single season, the same cavity may be used by a series of different secondary users one after another. We had several opportunities to witness and document this sequential possession several times. For instance, a nest hole built by great slaty woodpeckers was reused by jungle owlets, rose-ringed parakeets and common mynas to raise their respective broods one by one within the same summer.

The grey-headed woodpecker is easily recognised because of its grey face with black moustache-like stripe across. It’s only the males that sport a red cap. Photo: Dhritiman Mukherjee

Another interesting observation was discovering that woodpecker cavities invite keen attention from several other birds, even as they are being excavated. While monitoring an under-construction great slaty woodpecker nest, we recorded no fewer than five different bird species — all breeding pairs — coming to check out the hole on the same day.

We were fortunate for the chance to observe the fascinating life of these serial drillers up close. The intricate network of interrelationships between creators of tree cavities and the spectrum of users that subsequently benefit from these holes is an amazing phenomenon in nature. Because of their exceptional contribution to the functioning of healthy ecosystems, woodpeckers are considered “keystone species”, that is, species without which ecosystems would collapse. If woodpeckers disappear, many other species would also vanish, and the forest would become a lot poorer.

The continued reduction, degradation, and manipulation of forests has decidedly had a detrimental impact on woodpeckers across the globe. However, we should remember that their decline spells dire consequences for many other creatures. A jungle that echoes with woodpeckers’ knocking is a forest full of opportunities, not only for resident wildlife but also for humans to conserve what remains of the delicate web of linkages that bind different species together. 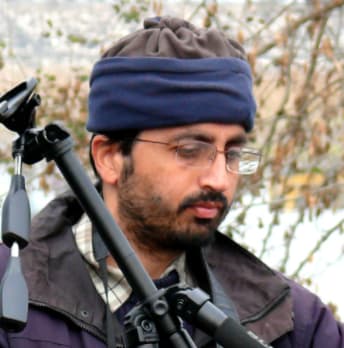