The Indian Grey Wolf is in Need of Greater Protection

A recent study found that most habitats suited to the Indian grey wolf lie outside protected sanctuaries and national parks, putting its survival at great risk

The Indian grey wolf (Canis lupus pallipes) once roamed across the arid and semi-arid regions of Indian peninsula. It was found in Rajasthan, Punjab and Gujarat in the North, and the Deccan Plateau and the Coimbatore Plateau in the South. Genetically unique from all other wolf species worldwide, it is believed to have evolved from an ancient wolf lineage around 400,000 years ago. But since the British rule in India, these wolves have been vilified and persecuted as vermin that feed on livestock. Reports claim that about 200,000 Indian grey wolves were killed by the British.

In recent years, the wolf has been facing an additional set of threats. Conversion of forests to agricultural fields has shrunk its hunting ground, reducing wild prey. As a result, the wolves are forced to feed on livestock near villages, increasing human-wolf conflicts and threatening its long-term survival.

Currently, 2000–3000 Indian grey wolves survive in India, mainly in Rajasthan, Maharashtra, and Karnataka. They occupy grasslands, scrublands and agro-forestry landscapes. It is also seen in West Bengal, Odisha and Jharkhand, but not much is known about its distribution there.

A recent study by researchers at the Zoological Survey of India (ZSI) attempts to understand the reasons for the increasing conflicts. The scientists chose two regions — the Chhota Nagpur Plateau and the Lower Gangetic Plains. The Chhota Nagpur Plateau forms the north-eastern edge of the Indian peninsula, covering districts in Bihar, West Bengal, Odisha, and Madhya Pradesh, whereas Lower Gangetic Plains covers most of the Bihar and West Bengal, eastern region of Orissa and north-eastern portion of Jharkhand. The entire landscape is almost plain, and consists of dry deciduous forests, and tropical, sub-tropical trees. 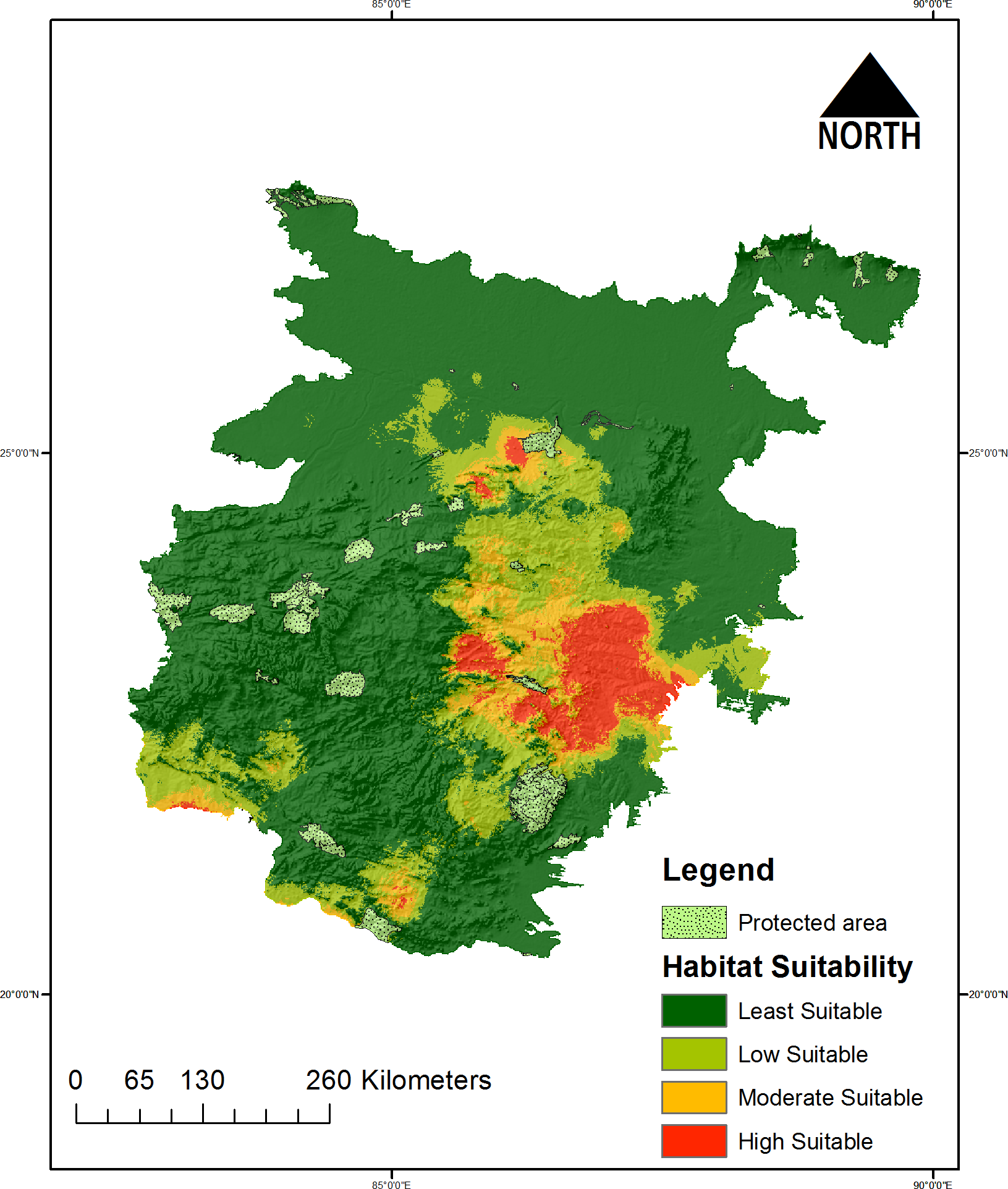 The researchers mapped areas that were most suited to the Indian grey wolf and compared them to areas that were legally protected. The study found that out of the 42 protected areas, only five were suitable for the Indian grey wolf. Photo courtesy: Zoological Survey of India (ZSI) The Indian grey wolf is one of the apex predators of the grasslands and hunts small animals such a rabbits or racoons. However, the destruction of its habitat is pushing it to wander around human settlements to prey on livestock such as sheep and goats. Cover Photo: Rutvik Trivedi/Shutterstock

The study region included a network of 42 protected areas, of which six were national parks and 36 wildlife sanctuaries. From 2015- 2016, they recorded wolves at 126 locations. “This data was then fed into a software model which was trained to identify habitats with similar features that are important for the survival of the species. To check the accuracy of the model, we also went to the sites,” said Dr Lalit Kumar Sharma of ZSI. The software model found that out of the total study area of 14,500 sq km under protected areas network, only 1,332 sq km area was found to be suitable. Of the 42 protected areas in the study landscape, only five were suitable for the wolf. Most of the suitable habitats identified by the software were found to lie outside the protected areas in both the study sites.

Two corridors were also identified as suitable habitats. They connect the Lower Gangetic Plains and Chhota Nagpur Plateau, which the wolves may use for movement. The habitats identified consisted of dry scrub vegetation, open forests and part-agricultural landscapes. In these non-protected areas, where the wolves’ natural prey is scarce, the wolves survive by preying on livestock, which is one of the main reasons for increasing conflicts. 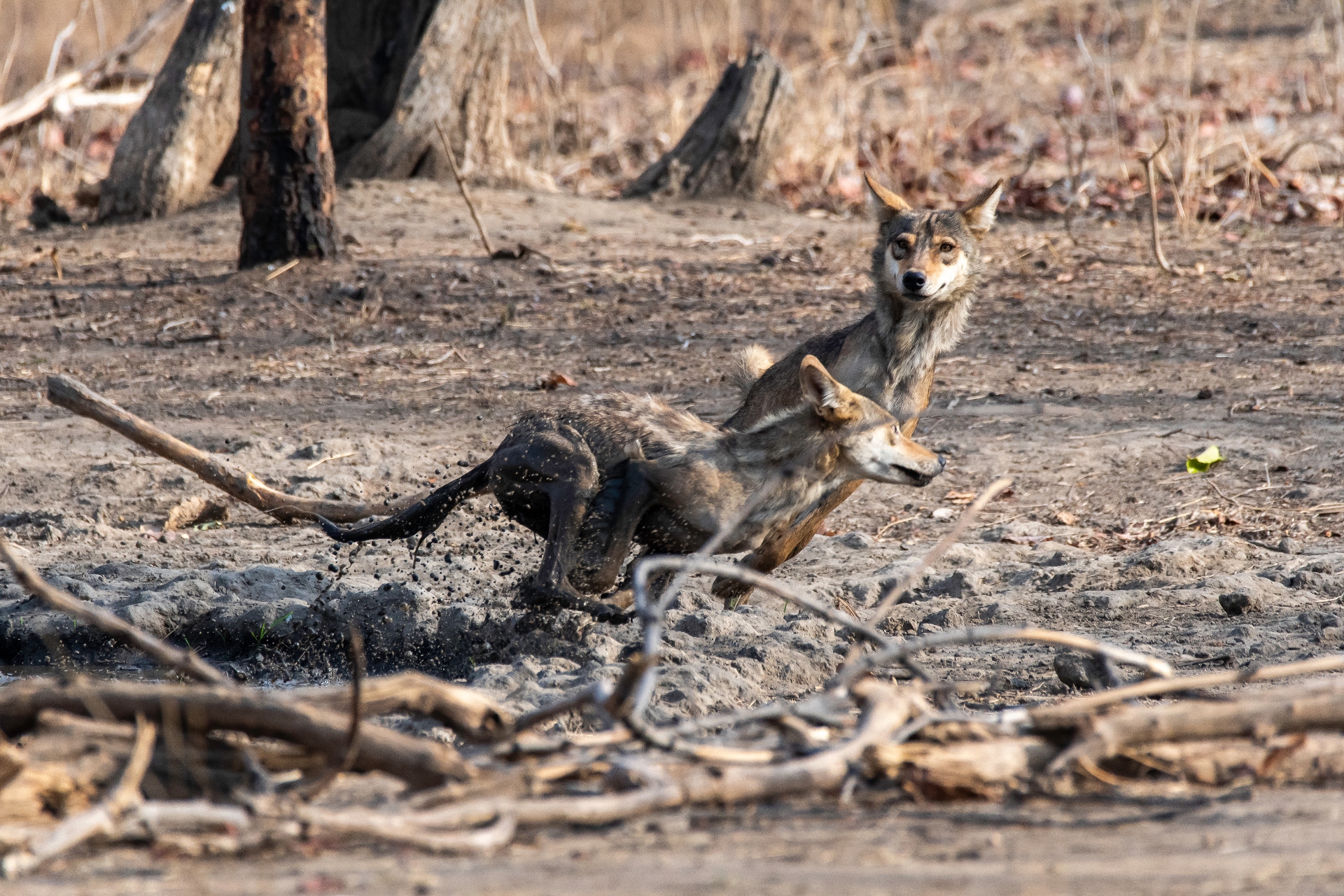 The Indian grey wolf has been persecuted for over two centuries. In British India, they were considered vermin, and killed extensively. Photo: Chaithanya Krishnan/Shutterstock

These findings on the distribution and suitable habitats have implications for conservation strategies of wolves. Conservation policies in India are focused on protected areas with an emphasis on larger mammals such as tiger, leopard and elephants. Besides, protected areas and non-protected areas are managed differently with different aims.

The Indian grey wolf is a top predator in areas with hot and semi-dry conditions. Found mainly outside the protected area networks, it needs immediate attention. “In India, not much attention is given to conservation of wolves. Activities such as afforestation is not required for these species. Habitats suitable for its survival and biological corridors should be protected. At the same time creating awareness among people will also help minimise conflict,” explained Dr Sharma. 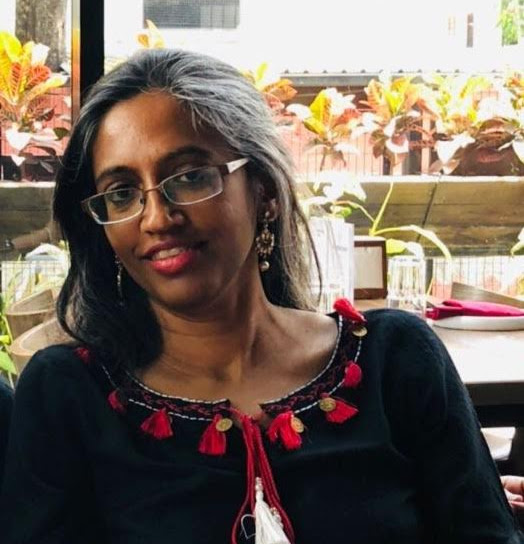 is a freelance journalist writing on environment, wildlife, science and health.

Dwarf Geckos: Life in the Shadows

Kuno, India’s second home for the Asiatic lion, is ready