More than 2OO years ago, his forefathers first started protecting the Velavadar grasslands. Over the course of his life, he has not only continued their legacy, but also turned into an unlikely guardian of the park’s endangered, sprightly, lesser florican 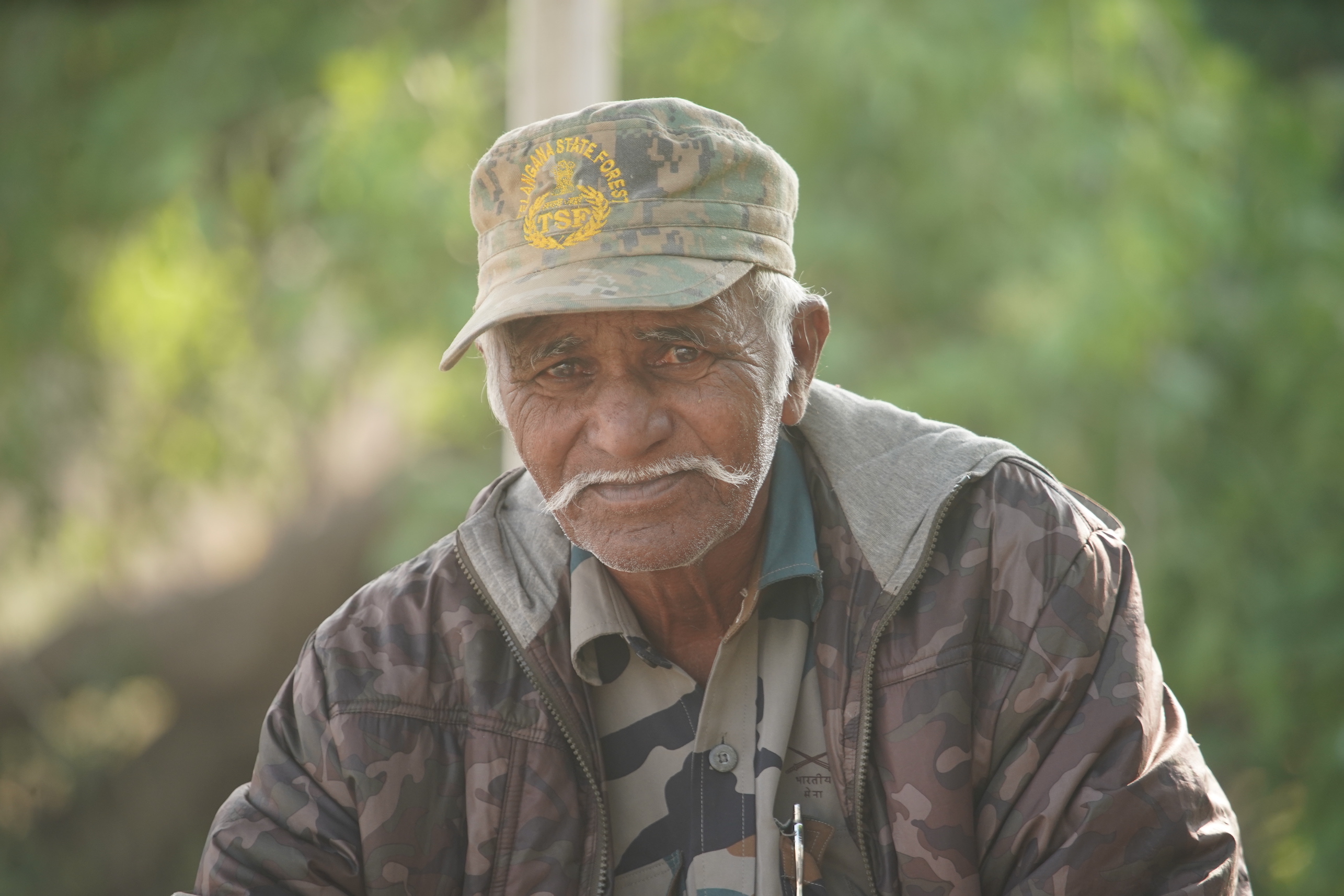 It’s a cold winter’s dawn and we are sitting with Allahrakha Khan at the booking office of the Blackbuck National Park in Velavadar. “Sixty-two or sixty-three,” he casually answers when I ask him how old he is, surprising me with just how little meaning otherwise-meaningful dates can have to a man who carries around the facts and figures of a park and its endangered species in his head.

Allahrakha Khan, respectfully called Kaka (Gujarati for paternal uncle), is a living legend for the park’s guides and naturalists. Like everyone else who works there, he too is a local. But what sets him apart is his lineage — he comes from a long line of men who have dutifully watched over the park — and his deep love for and commitment to the endangered lesser florican.

What is now the Blackbuck National Park used to be a vidi (grassland) that was one of five hunting grounds of the Maharaja of Bhavnagar. Around 200 years ago, the Maharaja brought Kaka’s forefathers down from Balochistan to Velavadar to guard the blackbucks he intended to hunt. “Since then, eight generations of Khan men have faithfully kept guard over the grasslands,” he says. As he talks about the land and his love for it, it becomes clear that the Khans and their families have assimilated into the local population. Today, the national park is Velavadar’s last surviving grassland. Others that lie outside the protected area have been taken over by unchecked development or turned into agricultural fields.

Blackbuck National Park, Velavadar, in Gujarat is a vast, pristine grassland known mostly for the herds of blackbuck seen in the area, but also a wide variety of grassland birds and predators such as the Indian grey wolf and the striped hyena. Photo: balajisrinivasan/Shutterstock Allahrakha Khan hails from a long lineage of men who have guarded the Velavadar grasslands, much before it was declared a national park. Cover Photo: Manan Dhuldhoya

In 1981, Kaka started as a watchman at the park, earning Rs 600 a month. “Down the years, I have doubled up as a cook, a night guard, and an ad hoc guide,” he says. Then, it was just another park that most of Gujarat’s residents didn’t even know of, leave alone pointing out on a map of their state. The lack of awareness, infrastructure and manpower, left the odd visitor grateful for his expertise. In the last four decades, Kaka has seen some remarkable sights. “I remember when the first hyenas came to Velavadar around 2003” he says. It makes my eyebrows arch in surprise to discover that one of the park’s current flagship species is a fairly recent immigrant — a timely reminder of how antecedents don’t matter as much as assimilation and contribution. He has seen the population of wolves rise due to the protection the park affords, and the one documented wolf attack on a human the locality has seen. “Around 20 years ago, a pregnant woman surprised a wolf in the fields,” he says. “The wolf attacked her and inflicted fatal injuries. There hasn’t been an attack since that day but even today, ladies give the animals a wide berth.” Kaka is revered for being a repository of natural evidence and local lore but it’s his dedication to overseeing the safety of the endangered lesser florican that makes him a figure of awe and respect for his juniors.

The lesser florican, the smallest of all bustards, is a sprightly bird. During the breeding season, the male puts on quite a show to attract a mate — leaping high above the grasslands, sometimes up to 350-400 times a day, making a series of croaking sounds. But a steady destruction of grasslands has threatened its survival. Once found in abundance, the lesser florican’s numbers have declined by 80 per cent in India. Today, a small population of a little more than 250 survive in the country. Velavadar is one of its last strongholds.

Allahrakha Khan has spent most of his life guarding the grasslands of Velavadar but has a soft spot for the endangered lesser florican, the smallest of all bustards. Photo: Dhritiman Mukherjee

Around 1997, Vijay Rana, an Assistant Conservator of Forests (ACF) posted at the park charged Kaka with taking stock of the lesser florican’s numbers. “Initially, it was just work but as time passed, my duty evolved into fascination which turned into love for this incredible bird,” he says. Well before the park was acknowledged as the last stand of this bird, Kaka worked tirelessly, without reward or recognition, purely to ensure that his generation would not be the last one to marvel at the characteristic jumps that marked the breeding displays of the male birds. However, though his duties demanded just keeping a count on the nests, his deep abiding love for the bird turned him into their unlikely guardian. Kaka recounts with a faraway look of his face, “I’d leave home every morning with a tiffin, a stick, and binoculars and spend the entire day tracking the birds and their nesting sites.” And while that might sound like a normal day for forest officials working a beat, it helps to know that the lesser florican breeds in the monsoon. Kaka would trudge through the sludge in fields and grasslands, often in pouring rain, undertaking his rounds to ensure that the nesting sites were safe and undisturbed. And if that doesn’t speak of the sheer commitment this needed, consider this — his daily beat involved 20 kilometres of cycling and walking, all to watch over a small number of four to five nests and a few mating displays. “I clearly remember the lay of the land and also the nests I’ve discovered and kept guard over,” he says. For 20 years, until he retired as a watchman in 2017, his commitment pushed him to care for the bird. Kaka is living out his retirement, as a guide, in an anonymity that belies his knowledge. Not many in the conservation community recognise his efforts or even know his name.

A testament to just how indelibly Kaka is associated with this avian wonder is evident from something Amit Vegad, the accompanying naturalist from the Blackbuck Safari Lodge, told me. The lesser florican is called Khadmor in Gujarati but the locals in Velavadar call it Tilor. “Even today, Kaka’s number is stored in my phone under the name Tilor Master,” Amit told me. Coming from one of the more accomplished young guides in Velavadar, this immediately speaks of the sheer respect Kaka commands.

Allahrakha Khan’s experience and wisdom is of great value to his son, Ramzan, who also works as a guide at the park. Photo: Manan Dhuldhoya

As Kaka was setting off in search of his favourite birds, he was joined at the park gates by his son, Ramzan. Unlike his father who worked his way up from a watchman’s position, Ramzan joined the park directly as a guide. He might be more reticent than his father but he carries the same love for the land in his blood and has benefitted from the information that Kaka has passed on. I ask Ramzan about the implications of his father’s work and he says “The information he shared with me indicated that the lesser florican is on the decline and that urgent intervention is needed.” For me, that should begin with the collection, collation, and documentation of the decades of data and insight that Kaka has observed and carries around in his heart and head. The fact that such a diligently compiled body of data on an endangered species exists only in the compiler’s mind is an oversight that should make conservationists hop up and down like the male lesser floricans in the breeding season.

Kaka’s grandchildren study in school and it looks very unlikely that they will follow his footsteps. And while this may mark the end of a centuries-old tradition, the biggest loss will surely be the matchless understanding of a unique ecosystem that this last guardian of this last grassland in Velavadar will take with him whenever he joins his forebears on their unending watch.

Asad Rahmani and his Five-decade Long ‘Vacation’ in Conservation