A Man, a Myth, and the Greater Adjutant in Bihar

Under the leadership of a bird enthusiast, a village in Bihar has come together to protect the nests and restore the future of the endangered greater adjutant

When Arvind Mishra, a pharmacist and birding enthusiast from Bhaglapur heard that greater adjutants existed in his home state of Bihar, he set off in hot pursuit, hoping to find them. His search led him to Kadwa Kosi Diara, a farming village in the floodplains of the Kosi river in Bihar. “I had heard that this bird nests only in Cambodia and Assam, and now it was here in our very own Bihar,” Mishra says excitedly over the phone.

The International Union for Conservation of Nature lists the greater adjutant as an endangered species with a global population of merely 1,200, more than half of it in Assam. The unexpected discovery of these greater adjutant nests in this village of Bihar set Mishra off on a personal mission. His friends though he was crazy, but he felt driven to find out more.

Mishra immediately reported the find to several leading wildlife organisations and got some interested. A non-profit decided to give his NGO, Mandar Nature Club, a small fund for research and protection. On a limited budget, Mishra and his team waded through wetlands for hours, sometimes through knee-deep sludge, to record the number of nests along the floodplains. They listed 18 nests and a small population of 78.

However, his frequent visits to their village made the people of Kadwa Kosi Diara deeply suspicious. “The villagers wondered if I was there to hunt the bird or smuggle it for a profit,” he says. Often, Mishra and his team were driven away, but he persisted. He carried bird guides to show villagers images of the greater adjutant. When they found an injured bird, to assure the locals of their intent, they tried treating it within the premises of the village. “Earning a community’s trust is a tricky and long-drawn out process,” says Mishra. “But if you earn it, big things can happen.”

Greater adjutants are colonial nesters, which means several birds will settle and breed near each other on a single tree. Pictured above is a nesting site along the floodplains of the Kosi river in Bihar. Photo courtesy: Arvind Mishra

Greater adjutants aren’t the prettiest of birds. They have bulbous, wobbly orange pouches dangled from their necks. Their birdsong is far from melodious — you mostly hear a steady clattering of the bill, interrupted by grunts and croaks.

Mishra’s enthusiasm struck a chord with local resident Arun Kumar Yadav. He had seen these bald, broad beaked birds, with dull grey feathers, and a wingspan 10-feet wide in the area for at least two decades. But things changed with the arrival of Mishra, who told him that that the ungainly, noisy bird in his backyard, was the greater adjutant, one of the most endangered species in the world. “I knew nothing about any bird, let alone this one in my backyard,” says Yadav. Today, he is at the forefront of a small, local movement to save the species and looks after at least 12 nests in his backyard.

Arvind Mishra tackled the initial scepticism he faced, and won over the villagers in two ways. First, he associated the bird with the figure of the Garuda — the part-human, part-eagle vehicle of the Hindu deity Vishnu. The greater adjutant stork’s association with a revered mythological character turned its fortune. Yadav says some of the villagers now worship the trees it nests on. In one instance, a juvenile stork was found injured and several villagers came together to take it to the rescue centre. When the bird did not survive, the villagers organised a religious funeral for its burial.

Second, Mishra stressed the fact that the survival of the bird that feasts on rats and snakes in fields was beneficial for the farmers of the community. Soon villagers were collecting fallen unhatched, intact eggs and handing them over to Mishra and his team on their visits. Some, like Yadav, have become emotionally involved in the birds’ conservation. Yadav, in the past, has allowed observation towers to be built on his land, and opened his home to a temporary rescue centre. “When I find an injured young one or bird, I first feed it fish and then inform the rescue centre,” says Yadav. He is a vegetarian, but is happy to stock fresh catch for the storks.

Greater adjutants are mostly seen around wetlands and floodplains where they feed on fish or small reptiles, or around garbage dumps, where they scavenge on waste. Photo courtesy: Arvind Mishra

The bird’s conservation has inspired an entire community, which is now proud of its association with the endangered creature. At a 2015 inter-state volleyball championship organised by the village, the stork was the icon of the event and showcased on all the banners, posters, and invitation cards.

After almost a decade of conservation efforts in Bihar, the population has gone up from 78 in 2007 to about 500 in 2018. The attention that Mishra and the community have received has put a spotlight on the rich biodiversity of the village’s surroundings. The area is now known to be one of a kind in the country, where six species of stork breed side by side: greater adjutant, lesser adjutant, black-necked stork, wooly-necked stork, painted stork, and the Asian openbill.

Asad Rahmani, scientific advisor and former director of the Bombay Natural History Society (BNHS), has supported Mishra’s efforts for years. He argues that for a species that exists outside legally protected areas like sanctuaries and national parks, the local community’s involvement is key. Over the last seventy years or so, conservation efforts in India, and across the world, have been going through significant shifts. Earlier efforts created protected areas or fortresses that excluded or relocated communities, but conservationists of late are pushing to include people as stakeholders. “I have learned so much from local communities about conservation,” says Rahmani. “We must listen to them, include their practices, and not always believe that we know best. Arvind Mishra and the community have achieved what perhaps government officials wouldn’t have been able to.” 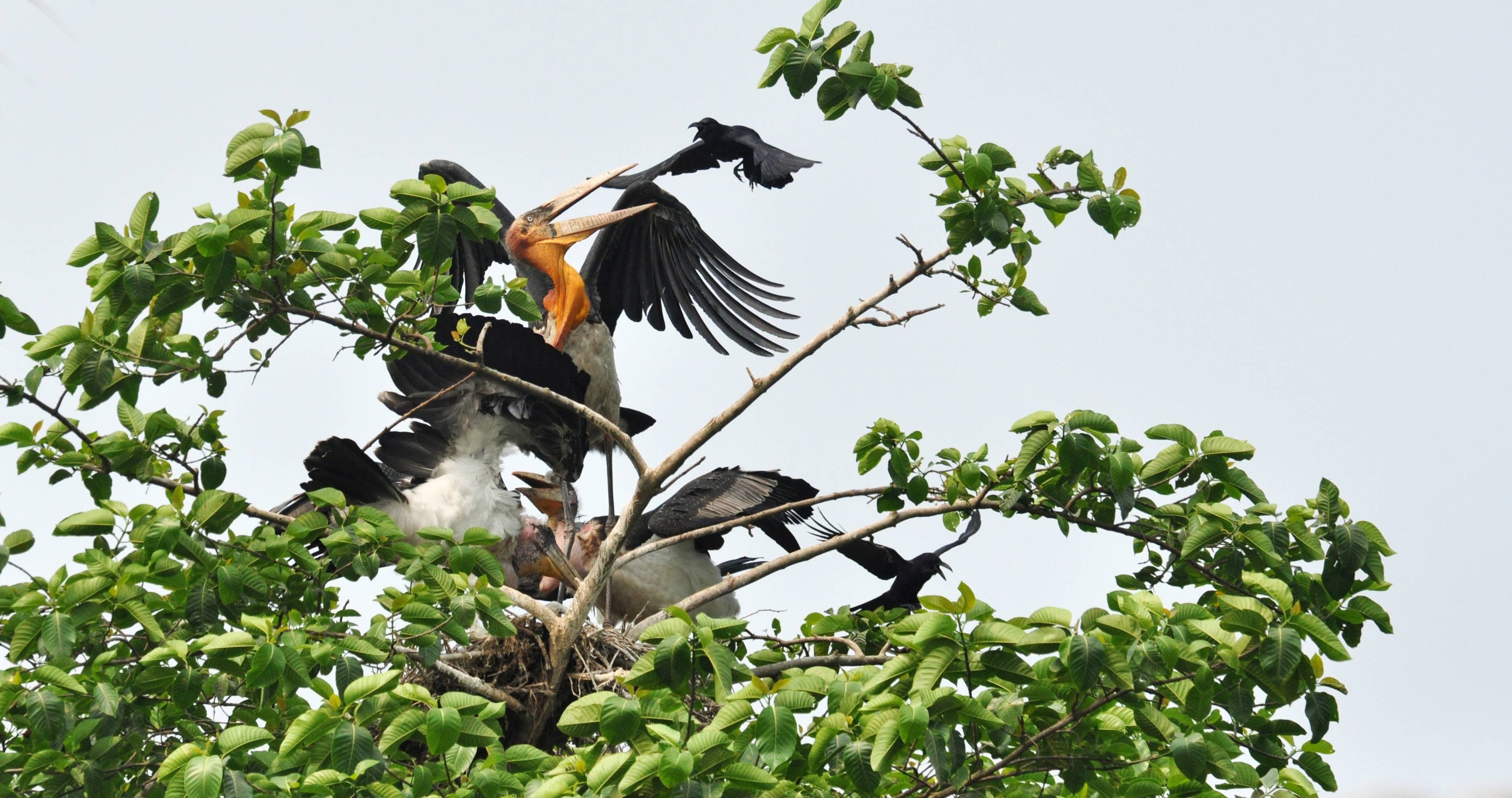 Grassroot community efforts in Bihar and Assam have brought the bird back from the brink. Though the bird remains endangered its future no longer seems as bleak as it did a decade ago. Photo courtesy: Arvind Mishra