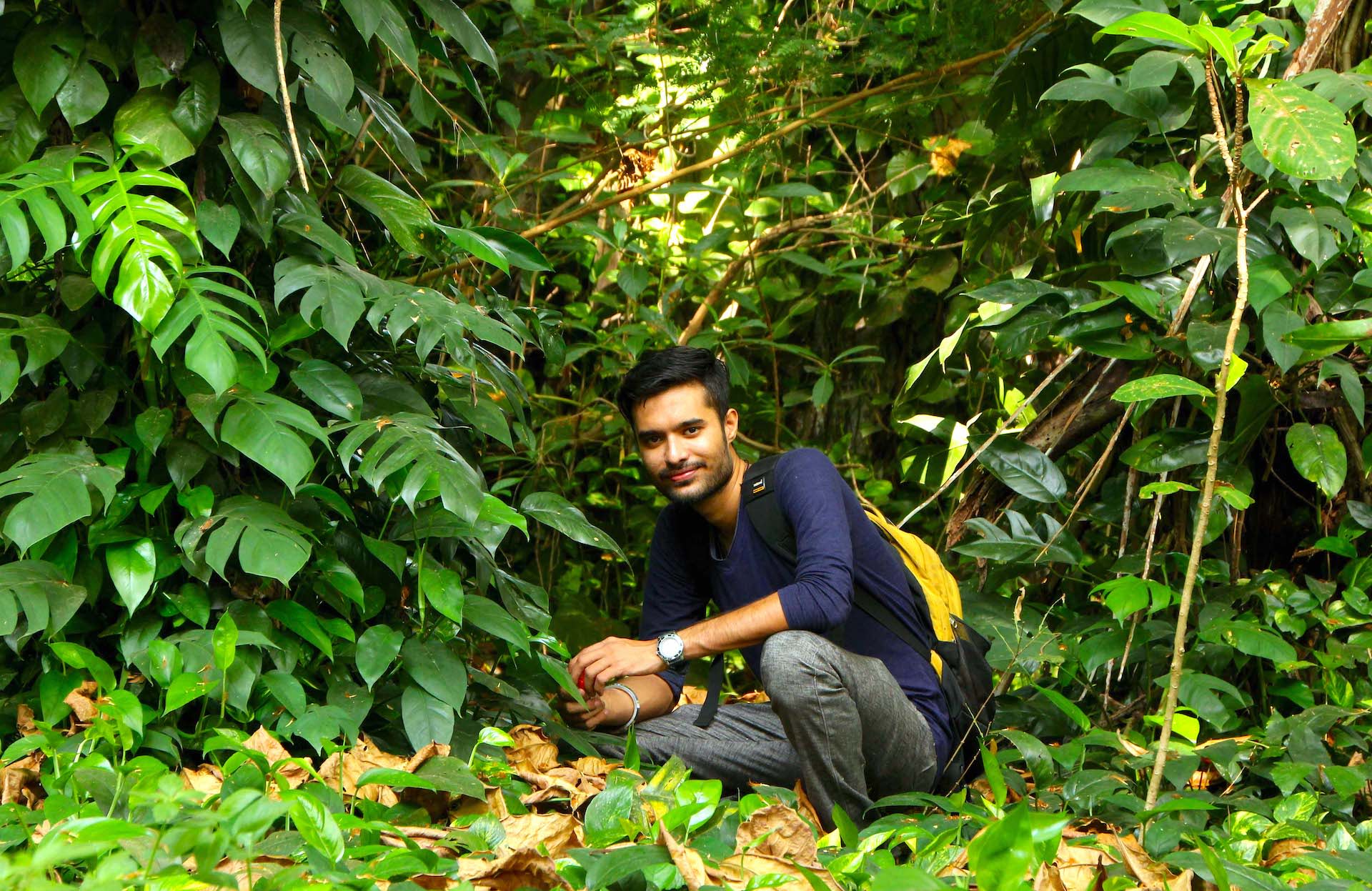 Spiders are small, elusive creatures often hard to spot. “Contrary to popular belief, only around 30 per cent of all spiders are ‘web-builders’, the remaining are wandering spiders found walking on the ground, and these are the hardest to spot. Sometimes, they hide under rocks or in leaf litter, and at other times they are nocturnal and cannot be spotted at all during the day”, spider researcher Dhruv Prajapati tells me.

Since he works with a rather unpopular creature, I had assumed that Dhruv must have been fascinated with spiders from the time he was a child. He tells me that wasn’t exactly the case, though he has enjoyed learning about animals since he was a boy of 15. He reveals that his interest in spiders developed while pursuing a BSc in Zoology at the MG Science Institute, Gujarat University. “As part of our tenth-grade science, we had to study taxonomy. While I tried to find excuses to avoid studying other subjects, I thoroughly enjoyed studying the chapters on taxonomy”, Dhruv reminisces with a smile. Now, he works at the Gujarat Ecological and Educational Research (GEER) Foundation in Gandhinagar and is one of only a handful of people in India who are deeply committed to researching arachnids in India. This perpetual learner is currently also completing a PhD from Bharathiar University, Coimbatore.

Dhruv is a broad-shouldered man with short-cropped hair, a wide forehead, an impressive handlebar moustache and a well-kept beard. He looks every bit the army man he aspires to be. He tells me he dreams of enlisting in the Indian Territorial Army someday. A die-hard patriot, he names new spiders he discovers after famous protectors of our nation. 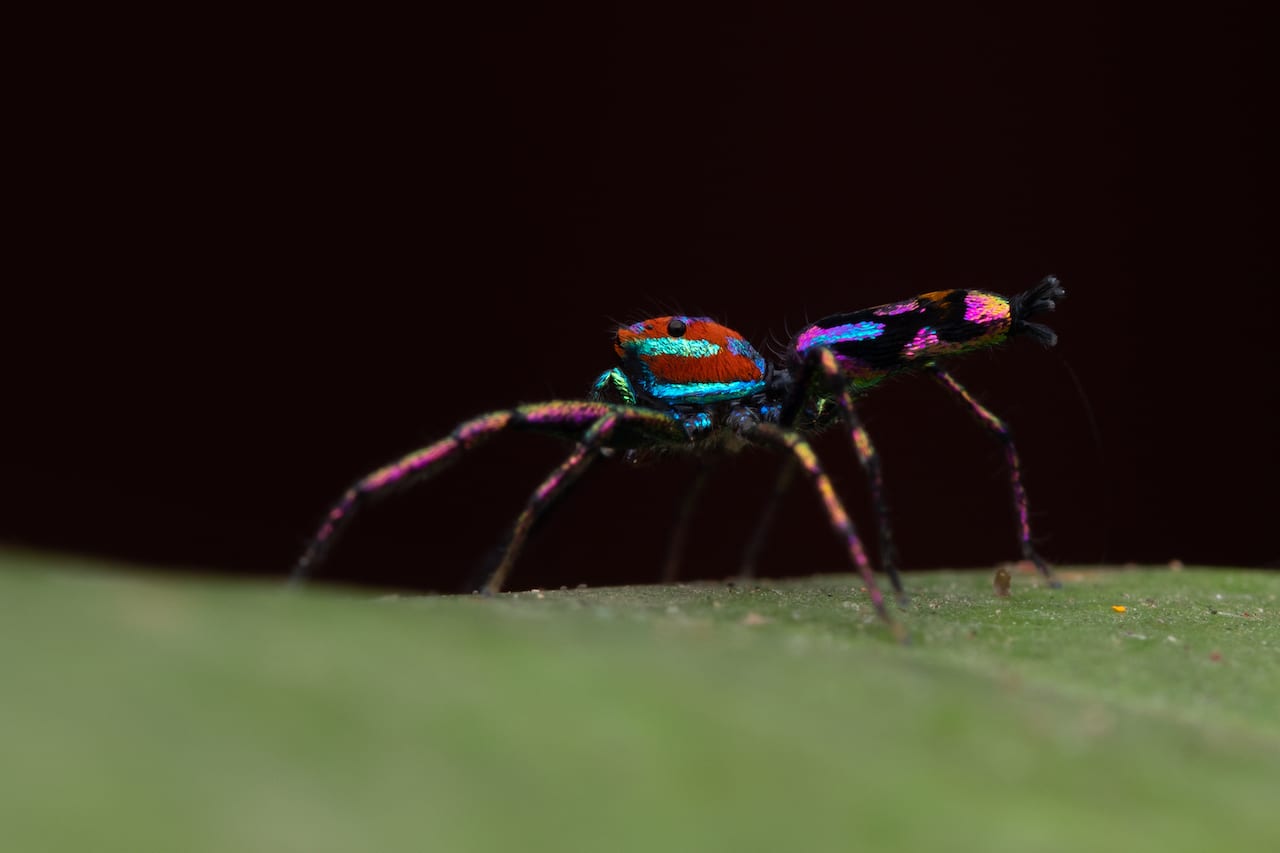 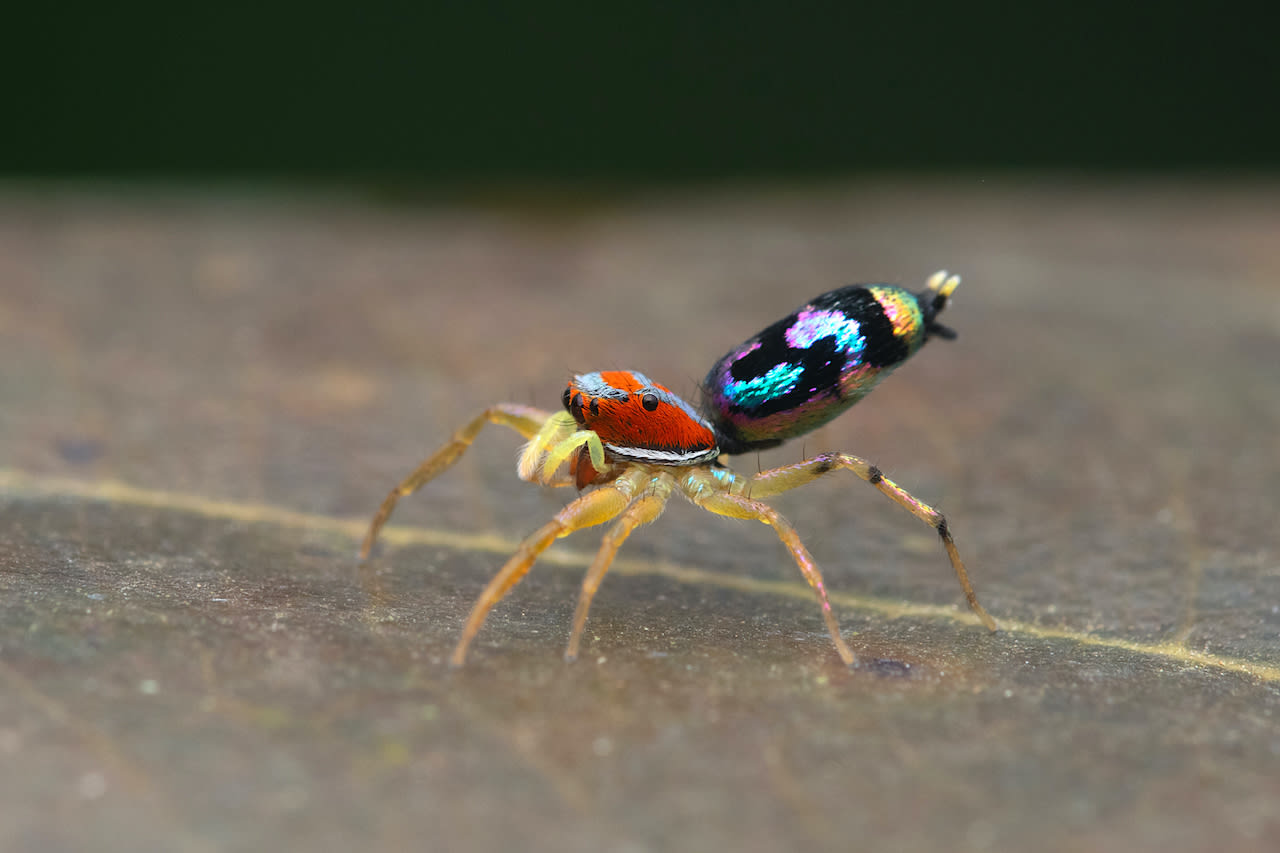 A stunning jumping spider, the Chrysilla volupe can be easily identified by its iridescent colour. Males (left) are more colourful with shimmering blue stripes and legs that appear golden and purple in the light. Females (right) may also have some shiny colouration but often have grey eyebrows and yellow legs. Photos: Jithesh Pai
Cover photo: Arachnologist Dhruv Prajapati has discovered 17 species of spiders to date, two of which belong to the rare ant-mimicking spider family (Corinnidae). Cover photo courtesy: Dhruv Prajapati

Dhruv was born into a Gujarati family in Ahmedabad. When I ask if his parents supported his decision to study spiders, he laughs and says, “My parents were thrilled that I was switching from my earlier choice, herpetology (studying reptiles and amphibians), which is considered a lot more dangerous than arachnology”.

After his BSc, Dhruv pursued a master’s degree. During the fourth semester of his MSc in Zoology from Gujarat University, he chanced upon a rare spider. To help identify the species, he reached out to Professor PA Sebastian, co-author of the book Spiders of India, who was considered the “Spiderman of India”.

Inspired and influenced by Sebastian’s work, Dhruv went to work with him as a Senior Research Fellow at Sacred Hearts College in Kerala for three years, where he studied spiders of the Western Ghats. During this period, in 2014, Dhruv discovered a new spider species in the backyard of his hostel.

“Researchers may spot spiders easily on their college campuses. The correct identification of the species takes time, anywhere between three weeks to six months, sometimes even longer,” he points out. “Moreover, because of the small size of spiders, one needs very sophisticated microscopes to identify them, which very few institutions in India are willing to spend on. This is perhaps why not many people choose spider taxonomy as a career path,” he says. “The study of spiders in India is still at a very nascent stage and presents immense opportunities for growth,” he adds. He successfully identified this new species on 27 July 2015, which was also the day ex-President Dr APJ Abdul Kalam passed, so he named the spider Tropizodium kalami after the 11th President and scientist.

Researchers like Dhruv are critical to conservation. Introducing the world to new species lays the foundation for conservation measures. But it is no easy feat and requires long hours in the field and lab. Photo courtesy: Dhruv Prajapati

Impressed with Dhruv, Professor Sebastian nominated him for the prestigious Young Naturalist Award by Sanctuary Nature Foundation, which he won in the year 2016. Dhruv is the first person to research spiders at his organisation, GEER Foundation. Here, a substantial amount of money has been invested into a special microscope to facilitate the research of spiders.

As we chat, I am curious about what a day in Dhruv’s life looks like. He explains that an entire team goes out into the field almost every day. Often, they set out at around 5 am. Each team member has a different area of expertise and targets to identify –Dhruv’s is spiders. The approximate search area covered in a day is around 500 sq m, which is divided into smaller grids. These are covered one by one to ensure that no part of the wetland, forest, or area in question is overlooked.

“When I reach a research point, the first thing I do is collect any spider that looks new to me. I document the easy to identify species later on,” Dhruv says. I learn from him that the only way to correctly identify a spider is through its genitalia, which makes completing the identification in the field impossible. “Just like all human beings have a unique fingerprint, every spider species has unique reproductive organs.” Dhruv continues to baffle me with spider facts. “Did you know that like scorpions, spiders also exhibit matriphagy —a behaviour wherein the young ones of a spider eat their mother once she is done feeding them —this is suicidal maternal care,” he says.

(Left) Dhruv and others examine the spiders they spot in the field.(Right) At 24, Dhruv was awarded the prestigious Young Naturalist Award in 2016 by Sanctuary Nature Foundation. Photos courtesy: Dhruv Prajapati

Dhruv collects spider specimens in tiny vials and brings them back to the lab to study under extremely powerful microscopes. He also says that this work has made him into an artist. “All people in this field need to learn how to draw. Illustrating the organ structures of spiders becomes inevitable since most labs can’t afford the kind of sophisticated cameras that this needs.” On certain days, when he is working on identifying a spider, he heads back to the lab during the second half of the day. There are other days when he’s back in the field for the second sample collection session from 3 pm until sunset.

Dhruv talks animatedly about the role spiders play in our lives. “There are several studies on spiders as pollution indicators. Very minute changes in spider habitats can hugely affect their population and diversity. By studying them, we can predict the health of food chains and ecosystems. In this way, spiders can help scientists get a pulse on the environment.” In writer Amitav Ghosh’s book, Gun Island, I recently read that spiders are gradually moving northwards —from warmer to colder locations. Scientists studying spiders point out that they help humans get a deeper understanding of our environment.

When Dhruv is not chasing spiders or dreaming of himself in a service uniform, he plays cricket, the stock market, or is entertained by his three pet cockatiels. An avid reader, he loves the author and poet Dhruv Bhatt, who writes on nature and Gujarati culture. One of Dhruv’s favourite books is Akoopar which highlights the relationship between men and lions.

Having already discovered 17 species in the eight years that he’s been working in this field, this modest 29-year-old says he’s only just getting started, and there’s loads of research yet to be done as far as arachnids are concerned. 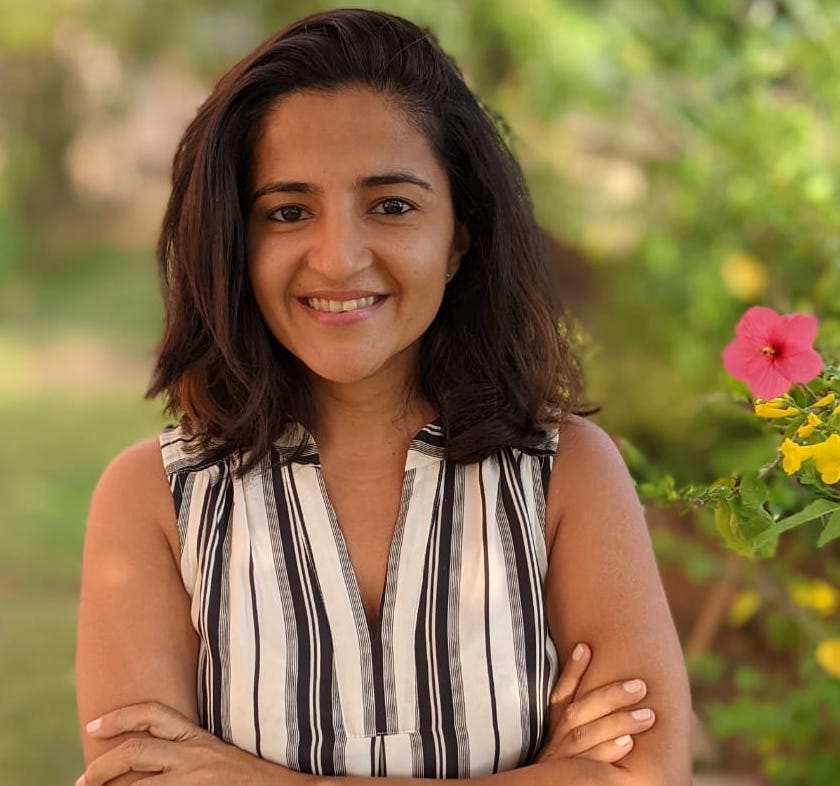 is an independent writer with a passion for environmental sustainability. She blogs about ways in which people can start living healthy, planet-friendly lifestyles at www.greenokplease.com.