Insuring Frontline Forest Staff: An Idea Whose Time Has Come

Deep in colonial-era archives, multiple strands of information emerge to piece together a fascinating story of The Canning Fund. That ninety-year-old insurance policy is surely something we need today

“This is the most prized possession under my care,” whispers Amarchand, bungalow chowkidar at the quaint forest rest house of Mundiyapani. He is holding a file close to his chest, almost in reverence.

Far away from the tourism frenzy of Dhikala and other tourism zones of southern Corbett Tiger Reserve, the world moves slowly in the forests of Kalagarh Division (northern Corbett). Here, in the middle of nowhere, set amidst a small elevated forest clearing, lies a beautiful 117-year-old forest bungalow, overlooking the gurgling crystal clear Mundiyapani stream. Punctuating the water’s gentle background chorus are the myriad sounds of the forest: the squeals of khaleej pheasants; the bellows of sambars; alarm calls of a spooked barking deer; perhaps the rasping grunt of a leopard and, if one is lucky, even the “aaaunghh” of a tiger. In some ways, Mundiyapani is in a time vortex that teleports you to a world long gone. It’s perhaps fitting then that this bungalow still preserves the written annals of those simpler, gentler times, in its register dating back to 1928. This is Amarchand’s most prized possession.

In these old forest registers every occupant once left behind a bit of himself, in ink. On lonely jungle nights, poring over these registers under a dim lantern would be an endless source of amusement for the bungalow’s occupants. Quirky remarks, funny one-liners, gossipy quips, records of “game bagged” (when hunting was legal), stories of ghostly encounters, and more, were the standard fare of most bungalow registers. Sadly, in a testament to how little we care for our heritage, most registers across thousands of forest bungalows all over the country, were stolen, lost, eaten by termites, or left to rot.

“You know, there have been times when people have come up to me, offered me one lakh rupees and asked me to hand this over to them. I wouldn’t give you a piece of paper out of this, even if you offered me a crore, I tell them off,” says Amarchand, pride beaming on his face, as radiant as the bright tree-filtered sunlight beating on his forehead.  He carefully opens the old register, its yellow, crumbling pages laminated by some thoughtful officer. The first page catches my attention. “Notice to All Sportsmen Shooting in Kalagarh Forest Division,” reads the title of the typed dog-eared page. The notice is signed by FW Champion, a legendary forest officer, naturalist, and conservationist, and among the earliest wildlife photographers of the world. He pioneered the tripwire technique, making him the father of camera trap photography. He produced two lovely books: With a Camera in Tigerland (1927) and Jungle in Sunlight and Shadow (1933), with dozens of stunning photographs, which inspired many hunters, including Jim Corbett, to give up their guns for cameras. Champion, at the time of publishing this notice was the DFO of the Kalagarh Forest Division.

Excited like a kid in a candy store, I flipped through the register. It was filled with a smattering of interesting entries and names in fading ink – from Sir HG Champion, FW’s elder brother, and one of the greatest names in the science of forestry to many a British army officers and hunters. However, one phrase had me intrigued and kept lingering in my head — Canning Benevolent Fund. “Sportsmen making use of the Forest Rest Houses and obtaining the assistance of the Forest Staff in this shooting are invited to subscribe to…The Canning Benevolent Fund,” read the opening lines of Champion’s notice.

Who was Canning? Nothing in the notice provided any clues. What was this fund? The notice did provide a brief note answering that question. “The Canning Benevolent Fund is a Service fund utilised to help the widows and orphans of the lower paid members of the Forest Staff who die in service. Such people obtain no pension from the Government and often suffer great hardships when the bread-winner dies, frequently as a result of living in unhealthy jungles. It is emphasised that subscriptions are purely voluntary, and that any amounts, however small, will be gratefully received,” wrote Champion with a request to either hand over the contribution to the Range Officer or send it to him personally. As I read these lines, two names from my past — Sukhdeo Parhaiya and Aziz Qureshi — came rushing back. They were two daily wage forest staff who had worked for years in Jharkhand’s beleaguered Palamau Tiger Reserve before meeting a tragic and violent end in a landmine blast in 1998. Sukhdeo was a Parhaiya Adivasi, member of a Particularly Vulnerable Tribal Group, who had lost his wife a few months before his end. Aziz was someone I was especially attached to as a young child. When the two died, between them they left behind nine young orphaned children. They had no insurance, and the then Bihar government refused to compensate them since they weren’t employees. It was under the personal initiative of the DFO that civil society and Palamu’s forest staff and officers came together to collect a relief fund for the families of the two martyrs. And here I was, 22 years after that incident, reading about a similar fund created for similar men almost 90 years ago.

Entries in Mundiyapani bungalow forest register date back to 1928. Register entry by FW and HG Champion (top) and a donation to Canning Fund mentioned (below). Photos: Raza Kazmi

The problem of financial hardship and lack of governmental support towards forest staff, especially those who work on daily wages and form the bulk of India’s frontline forest staff, is widespread. Moreover, this is a problem for which no dedicated official body or fund, under any aegis, exists in any Indian state. So, it was quite incredible to realise that nearly nine decades ago, there existed a dedicated body and fund to take care of the families of the lowest rung, the most vulnerable forest department personnel. I knew I had to find out more about this fund and the man after whom it was named.

Digging through archive sources related to colonial-era forest bureaucracy for a few weeks, I found bits and pieces of information. Piecing all these multiple strands of information together finally laid bare a fascinating story.

Lost in the roll call of meritorious forest officers of the colonial era is the name F Canning, an Imperial Forest Service officer appointed to the service in 1903. Canning served his entire life in the United Provinces. From 1929 to 1937 he was the Chief Conservator of Forests, which was the head of the forest department in the Province. While the names of Jim Corbett, FW Champion, EA Smythies, and Lord Hailey are often remembered for creating Hailey (now Corbett National Park), India’s first national park, history has forgotten Canning. He and the aforementioned others, were members of the influential Association for the Preservation of Game in United Provinces (led by Jim Corbett). Canning was the prime mover in drafting and getting the United Provinces National Park Act (1935) passed. It was this legislation that gave birth to both Hailey and Nanda Devi National parks. However, his greatest legacy was, undoubtedly, the policy-based corpus relief fund that he envisioned, designed, initiated, and got approved in order to assist the families of men who died in the line of duty. The United Provinces Forest Department (Canning) Benevolent Fund was inaugurated in 1932.

As per the Canning Fund’s Articles of Association, the scope of beneficiaries of Canning Fund was quite wide, and included many low rank personnel who died in service, or within 12 months of retirement. In those days, many of the positions that are today held by daily wage staffers – such as bungalow chowkidars, mahouts, chara-cutters — were permanent positions, and also covered by the fund.

The first page of the Mundiyapani bungalow register has a notice signed by FW Champion encouraging visitors and hunters to donate to the Canning Fund, and also donate books for the in-house library. Photo: Raza Kazmi

Apart from the initial government sanctioned seed corpus, this fund was to become self-sufficient through subscriptions and donations from forest officers and others. The donations and subscriptions were compulsorily voluntary, but the rate of subscription was fixed at one day’s pay per annum. As I read this, I was reminded of the days when the relief fund for Aziz and Sukhdeo was being collected and each forest department employee, from the junior-most to the senior-most, contributed one day’s salary to the fund.

The management of the Canning Benevolent Fund was well thought out and meticulously organised. An eight-member Central Committee met twice a year and adjudicated on all aspects of beneficiary claims. It also managed the corpus effectively by making investments so that the interest earned would make the fund self-sustaining.

The Canning Benevolent Fund was very successful. In just over three years, 82 Range Officers, 932 Deputy Range Officers, Foresters and Forest Guards, 197 clerical staff, and 112 other lower level staff had pledged a day’s salary every year to the fund. That same year (1936), grants and pensions worth Rs1,649 provided succour to 23 families. Additionally, all the paperwork associated with running this scheme was completed pro-bono by various staff, as a token of camaraderie and departmental brotherhood.

It is not hard to imagine why, on the day of Canning’s retirement, forest staff from many distant forested hinterlands of the United Provinces came to bid him farewell, and broke into thunderous cheers when the old forester made his final speech before riding off into the sunset.

This photo (left) by FW Champion was published in a little-known magazine called Indian State Railways Magazine and captioned "Forest-guards in the tiger and bear-haunted jungles in which they work…". FW Champion (right) was a legendary forest officer, naturalist, and conservationist, and among the earliest wildlife photographers of the world. Photo: James Champion/Tripwire for A Tiger

Much water has flowed down Kumaon’s rivers since then. How, why, and when, did this efficient system wither away? I couldn’t find an answer to that question despite my best efforts. However, there are many lessons to be learned from the story of the Canning Fund. Perhaps the most important is that at an institutional level, an insurance policy is much needed for our frontline forest staff, with a similar corpus fund at the heart of it. 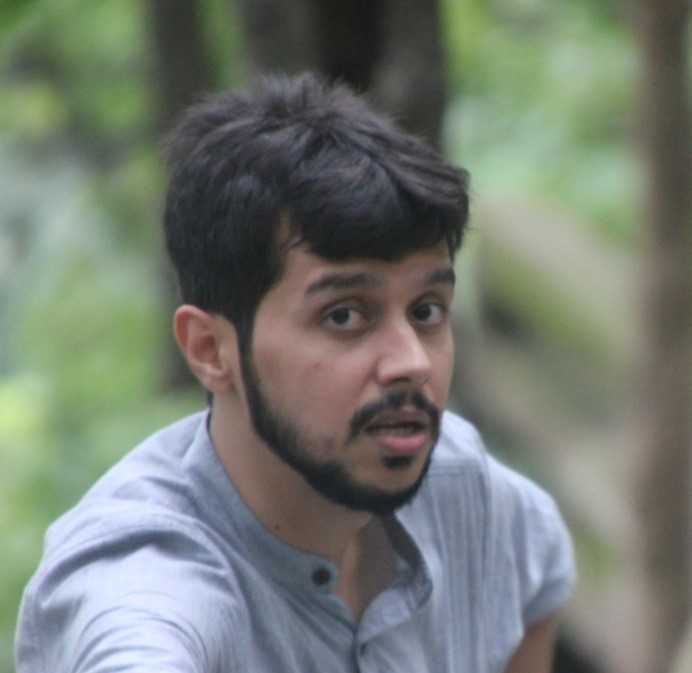 is a conservationist, writer and wildlife historian. He works as a Consultant at the Ashoka Archives of Contemporary India, Ashoka University, Sonipat, Haryana.