The humble house sparrow’s population was seeing a steep decline for decades, until an ecologist decided to do something about it 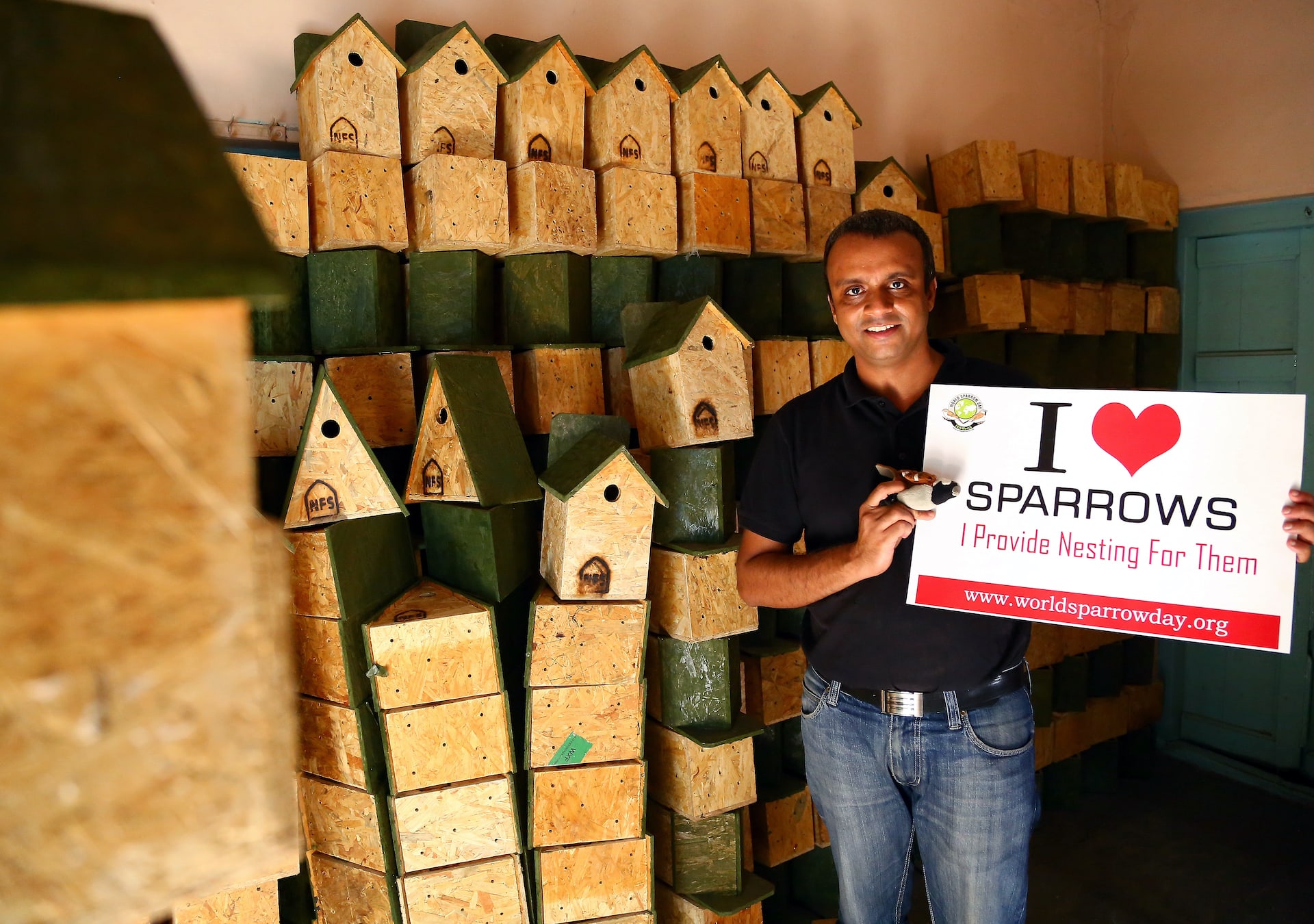 As a young boy, Mohammed Dilawar remembers seeing hundreds of house sparrows (Passer domesticus) around his grandmother’s home in Nashik. Much of his childhood was spent there, and sparrows and vultures were common visitors. Sparrows roosted on top of television antennas, electric wires outside his home and even built nests inside his home. In 2005, when he was working as the head of the Department of Environmental Awareness at RYK College of Science in Nashik he came across a student project that got him thinking. “A student brought in a project on the decline of sparrows in the UK. It was around the same time that vultures in India were seeing a catastrophic decline. When I read it, I suspected that India was heading the same way,” he says.

Immediately, Dilawar started working towards securing funding to conserve sparrows. When he first started doing fieldwork, people didn’t think that sparrows were of any conservation value. But this is far from the truth. Sparrows serve an important role in our ecosystem. They mostly feed on thistle, weed and sunflower seeds, and sometimes fruits and berries too. When they feed, they also disperse seeds to places far away from the tree. Through this, sparrows aid the spread and survival of many trees, plants and the regeneration of our ecosystem.

In the early 2000s, while there was immense knowledge and interest towards the conservation of glamorous species like tigers in India, there was little interest in preserving the common sparrow. He had begun to notice that there weren’t as many sparrows in the cities as before, but he could not find any historical database on sparrow population. He had to depend on anecdotal evidence — sparrows that were once omnipresent in urban areas, were getting harder to spot. “Sparrows were not a threatened species, so there was no interest or work done on them,” he says. Dilawar’s immediate task was to collect as much information about the sparrow as possible and to create awareness among the masses and policymakers about the bird. The competition was stiff. How do you convince someone to shift their attention from a creature as charismatic as a tiger to a common, neigbourhood bird?

In 2005, to push his agenda, Dilawar started a non-profit organisation called Nature Forever Society (NFS) that focuses on conserving common bird species. Apart from conducting research on sparrows, Dilawar and his organisation tried to encourage citizens to care for the bird. 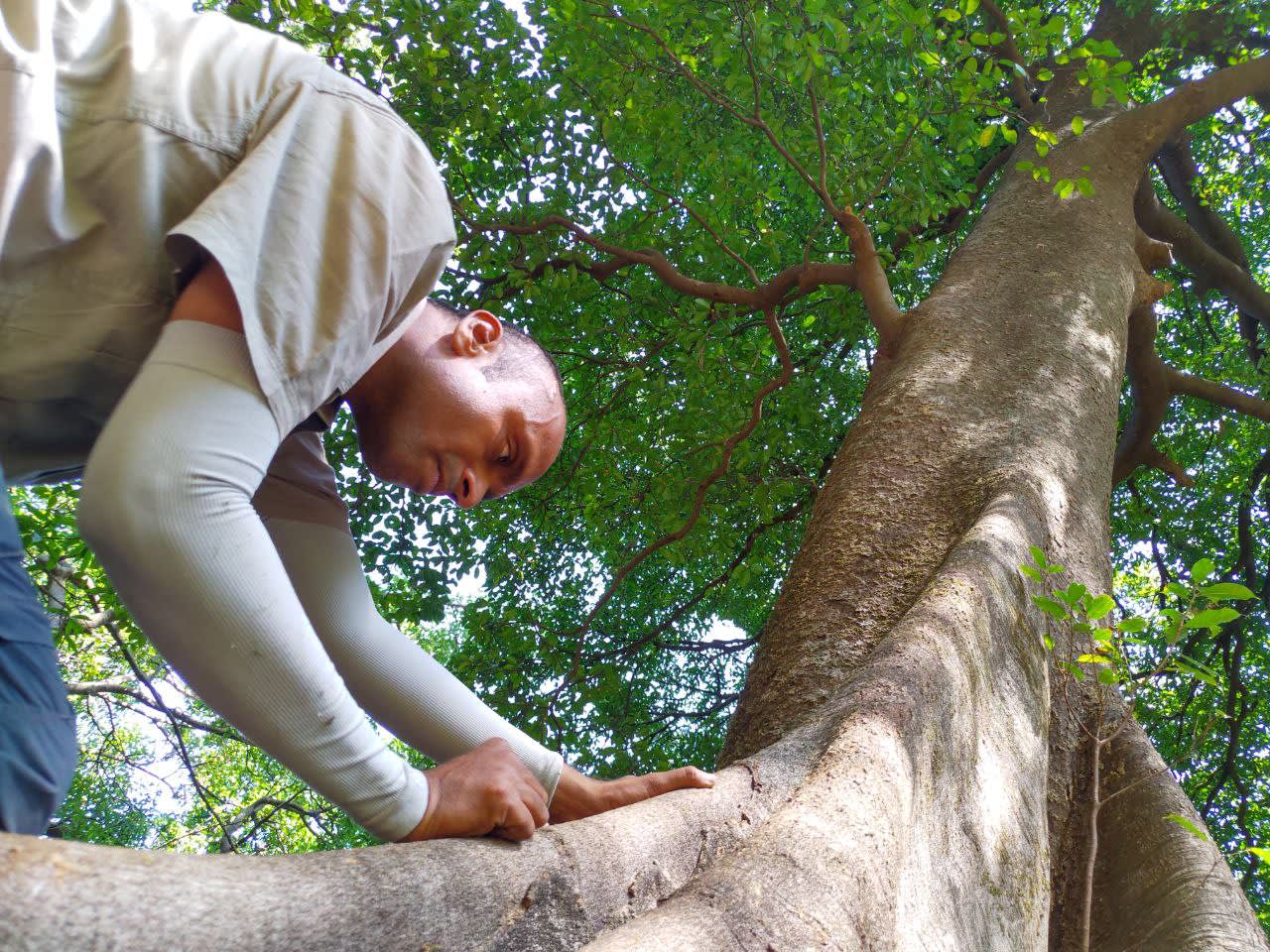 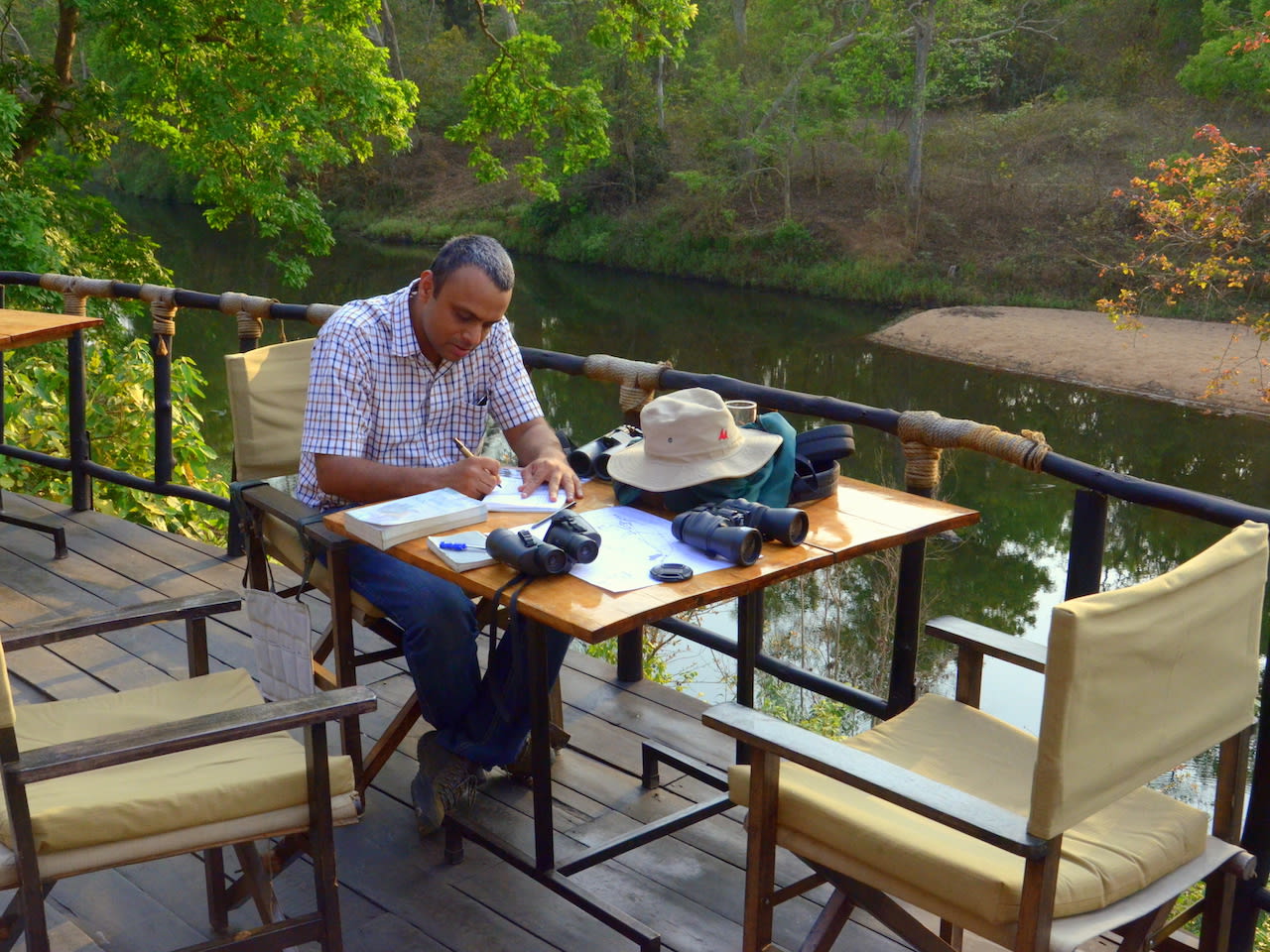 (Left) Realising that the loss of indigenous trees contributed to falling sparrow numbers, Dilawar started working towards the restoration of native biodiversity in Maharashtra. (Right) Seen here at the Kanha National Park, Dilawar says convincing people about the conservation value of sparrows was a real challenge when he started out to secure funding to study the birds. Photos courtesy: Varun Sharma (left), Mohammed Dilawar (right)

There are several reasons for the decline of the sparrow population, and the most significant cause is rapid urbanisation. Sparrows have always nested in and around human settlements — in roofs, in niches, in cracks and crevices. However, new urban buildings have no roofs and next to no niches where sparrows can build nests. “Our first goal was to create nesting opportunities for sparrows,” he says. He started ‘Adopt Nest Box’ scheme. Dilawar had seen the ingenious sparrow build homes in a switch box of a telephone pole. This led to an interesting idea. The ‘Nest Box’ created by NFS, is a simple box with a hole made out of recycled pine heart wood that can be used by a sparrow to build a nest.

In 2008, and after the sale of at least 1000 nest boxes and bird-feeders, TIME magazine recognised him as the “hero” of the environment for his efforts.

But Dilawar’s work didn’t end here. His second mission was to create food opportunities for the sparrows. Dilawar elaborates, “About two to three decades ago, women used to sit outside their homes and clean grains in the balconies and verandahs. They would discard the poor-quality grains that sparrows would feed on,” he says. The other source of food for these sparrows were the stray grains that were spilled while transporting them in gunny bags and the ones that were kept partially opened at local stores. But since food grains now come in pre-cleaned and pre-packed packages or are kept in closed stores, these birds are left in a lurch.

Sparrows have evolved with humans for the last ten thousand years. All their ecological needs, whether it was food, nesting sites, or security were dependent on humans. Sparrows are not seen in areas where the human population doesn’t exist, such as deserts, forests, or the poles. These gradual changes in our every day life have dealt a blow to their population.

Few conservation projects see staggering success, unless people are involved in the process. Dilwar doesn’t accept any donations for sparrow conservation. His main goal is to conduct awareness drives in office complexes, shopping malls, schools, colleges, have exhibitions to spread the word about the importance of saving sparrows.

On March 20, 2010, NFS celebrated the first World House Sparrow Day, an international initiative, in collaboration with the BNHS, Cornell Lab of Ornithology (USA), Eco-Sys Action Foundation (France), Avon Wildlife Trust (UK), and numerous other national and international organizations across the world. Understanding the necessity to get national and international attention for conservation for sparrows, NFS lobbied for March 20 to be declared as World Sparrow Day. After 2010, when India observed the first World Sparrow Day, the idea caught on in 50 countries. The day has now become a people’s movement globally thanks to his efforts. 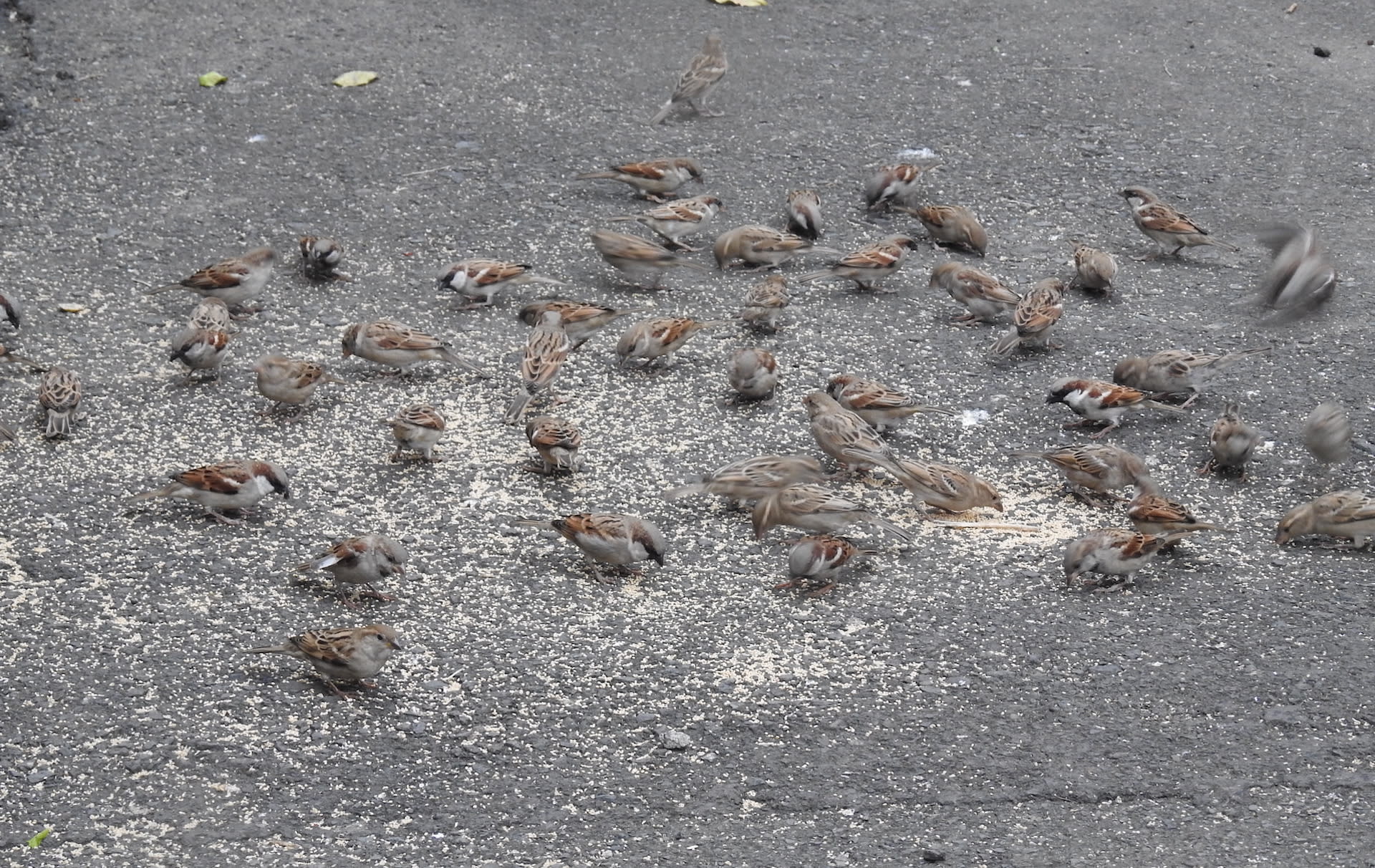 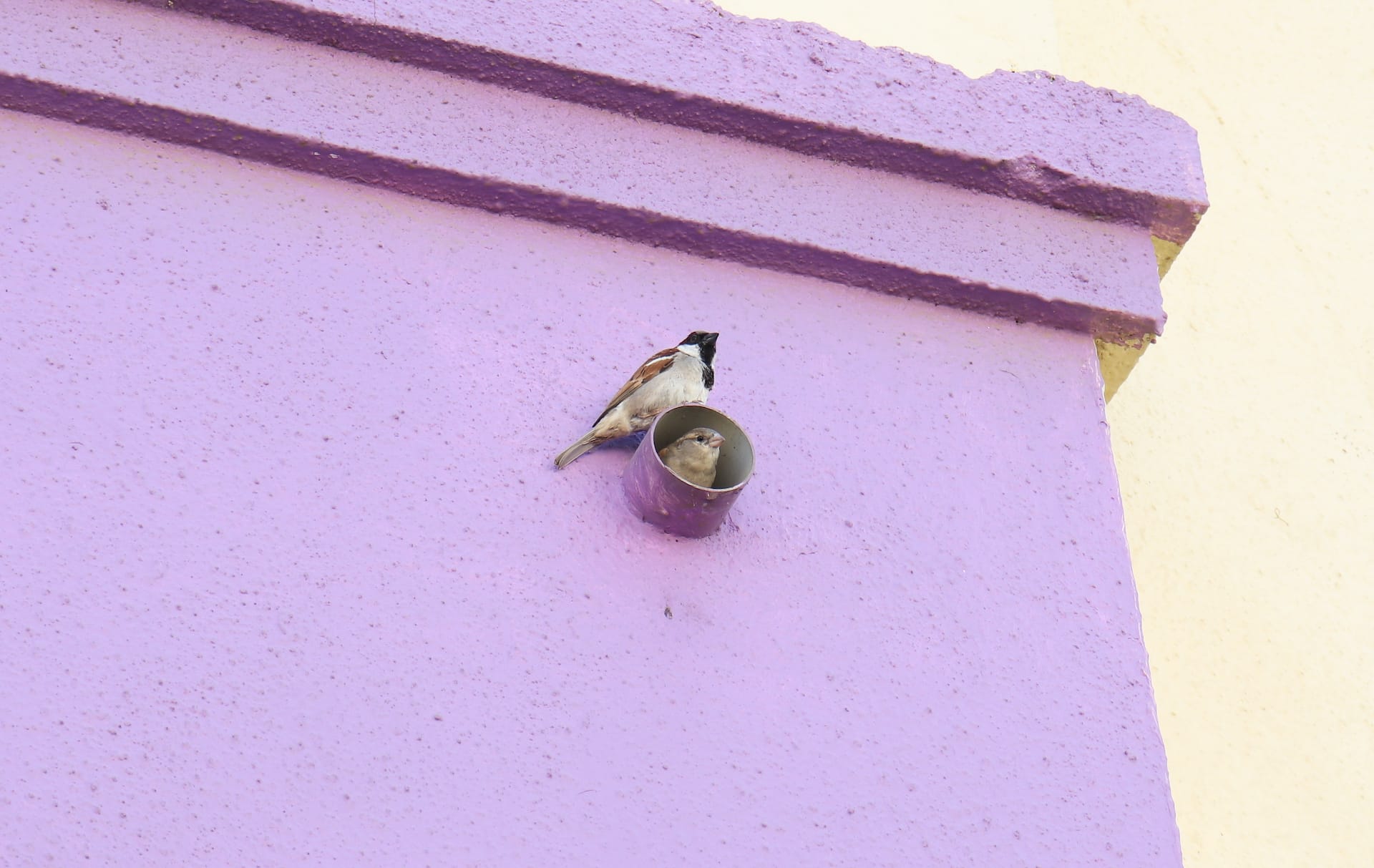 (Left) The house sparrow mostly feeds on the seeds on grains and weeds. In urban areas, it is dependant on seeds put out by humans for sustenance. (Right) Modern buildings lack the nooks and crannies that sparrows require to build their nests. But these resilient birds have learnt to adapt and finds spaces where none seem to exist. Photos: Dr. Raju Kasambe, CC BY-SA 4.0 (left), Dhananjay Bhagat/Shutterstock (left)

Within a few years of founding NFS, Dilawar has convinced over 40,000 people across the country to join him in the movement. Through rigorous campaigning, Dilawar has finally noticed a marginal increase in the number of sparrows in Maharashtra, especially in areas where the basic needs of sparrows were fulfilled.

Now he has a new mission on hand. In 2020, Dilawar’s organisation started the “I love sparrow” campaign to create an emotional connect with the bird, and distribute bird feeders free of cost to as many people as possible. 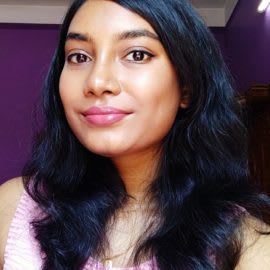 is a freelance writer based in Kolkata, India. Her work focuses on social justice, politics, and culture.