A few years ago, Musa Khan could barely identify five birds. Today, renowned wildlife photographers and ornithologists depend on his expertise 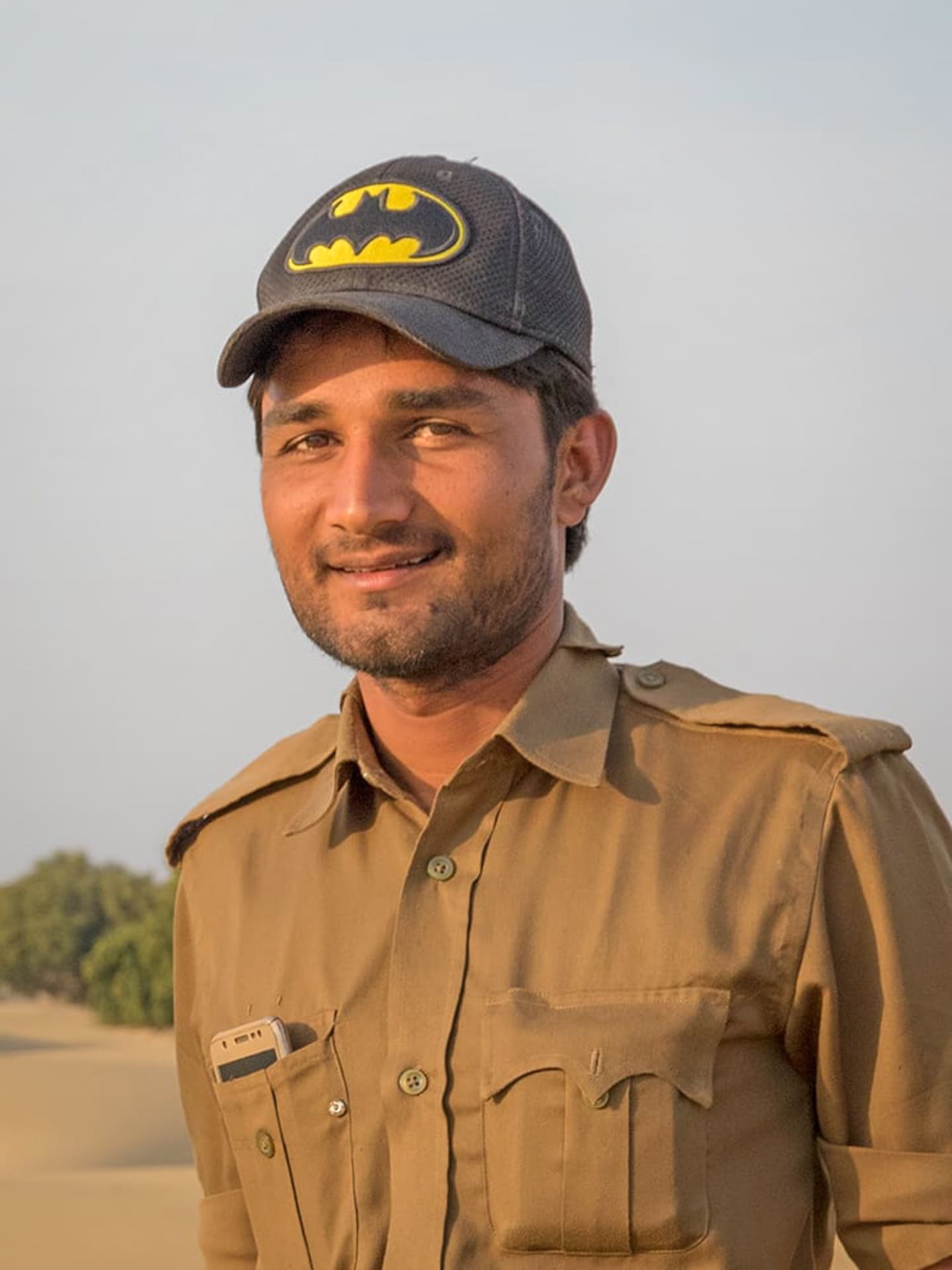 In 2013, a chance encounter with a wildlife photographer, Gururaj Moorching, and his friends, changed 20-year-old Musa Khan’s life. Buddha Ram, a forest guard at Desert National Park (DNP), Rajasthan, had requested Khan to drive his guests through the park. Khan at the time did odd jobs around the park. “I knew only five birds: house sparrow, blue rock pigeon, laughing dove, ringed dove and crow,” he confessed during my recent visit. But during the two days he spent with Gururaj’s team, he saw several birds including the rare great Indian bustard and the steppe eagle. The excitement among the photographers was infectious. Khan knew there was no turning back.

In 2015, when the forest department organised a workshop to train tourist guides, Khan signed up, and turned out to be one of the top performers of the batch. Gobind Sagar Bhardwaj, chief conservator of forests, and CR Anoop, the district forest officer of DNP, saw potential in this young man. They were not wrong. In the last five years, Khan has become the most sought-after bird guide in Jaisalmer. He is mostly booked during the “birding season” from October to March. He is also learning about reptiles and snakes that attract a small number of herpetologists during the summer months to the Thar desert when the reptiles are most active.

: Spotted flycatcher is often sighted perched on exposed branches over open areas, such as the arid landscape of Desert National Park. Photo: Dhritiman Mukherjee
Cover: Until five years ago, few people knew Musa Khan. Today, he is one of the most in-demand birding guides in Desert National Park. Cover photo courtesy: Musa Khan

Musa Khan was born on February 2, 1994, to Barsi Khan and Suni Begum of Nibha village, located inside the Desert National Park. He has three brothers and three sisters. Khan is married and has a son and younger daughter. Apart from picking birdwatching skills, Khan has also invested in building a website, and regularly uses social media to advertise his services, and expand his business. He proudly showed me his website and bird photographs on his site.

Khan can not only recognise more than 200 bird species but he also knows their basic ecology, behaviour, migration, movement, and plumage differences. If I need additional information on a species from DNP, I get in touch with Khan. Recently, when I heard that the merlin (Falco columbarius) had been seen in DNP, I called him immediately. The merlin is a rare winter visitor to extreme northwest India. He told me that this winter, he had 50 sightings of merlin and estimates that at least 10 individuals of different age-groups were present.

Another fact that I learnt from Khan was that the tawny eagle (Aquila rapax) which breeds in the park becomes thin and haggard in winter, just after the breeding season is over. “Iski body down ho jati hai,” said Khan. (His body loses energy.) This happens in many raptors that have a long breeding season, and have to raise ever-hungry chicks. When summer begins, the spiny-tailed lizards (Saara – hardwickii) wake up after their long winter hibernation and become easy prey for the eagles. The hungry tawny eagles are waiting for this opportunity to feast on these lizards, and regain their weight and regrow new feathers. It is also their breeding time so they become darker. As summer progresses, the spiny-tailed lizards become fat, thus providing much-need protein to the hungry chicks of tawny eagle and many other raptors.

Musa Khan not only recognises different species of birds, but can also talk about behaviour, and habitat, and can lead wildlife photographers to places where some of the rarest species can be spotted with relative ease. Photo courtesy: Musa Khan

Khan can now talk for hours about the birdlife of DNP and the Thar desert. He knows the small gender differences between male and female red-headed vulture Sarcogyps calvus, or the subtle plumage, vocal and behavioural variations in 10 different lark and 10 different pipit species that occur in DNP. Larks and pipits are difficult birds to identify as many species look similar with extremely minute variations. For example, you need an expert’s eye to identify a juvenile paddy field pipit (Anthus rufulus) from a juvenile of tawny pipit (Anthus campestris). Even I get confused with my 45 years of birdwatching experience, but Khan has developed the skill to recognise them.
Khan is now well-known in the birdwatchers’ circle. People plan their birding visit to the Thar when Khan can give them time. He is such a busy man! Khan told me that in the winter of 2019-2020, he took 100 parties of 2 to 8 people, each for 1-3 days. Unfortunately, the ongoing coronavirus pandemic has seen a fall in the number of visitors.

Whenever I go to the Desert National Park, I try to spend time with Khan. During my August 2019 visit with Dhritiman Mukherjee I asked Khan “What birds do you see these days?”. He told me that rufous-tailed scrub-robin (Cercotrichus galactotes) and spotted flycatchers (Muscicapa striata) are on their passage migration through the Thar. I told him I wanted to see them. Soon we were in a grove of four large khejri trees where a spotted flycatcher was flitting from tree to tree, catching insects to renew its energy for its long migration to Africa. Next, he took us to a scrubland, and said “Right side me dekhye” (See on your right side), and soon we spotted a rufous-tailed scrub robin. Khan knows the exact spots to find particular species and also knows the best seasons to find them. During the winter of 2020, he took me to a bare ground where many pairs of cream-coloured courser were ‘coursing’ on their china-white legs. A delightful sight indeed! 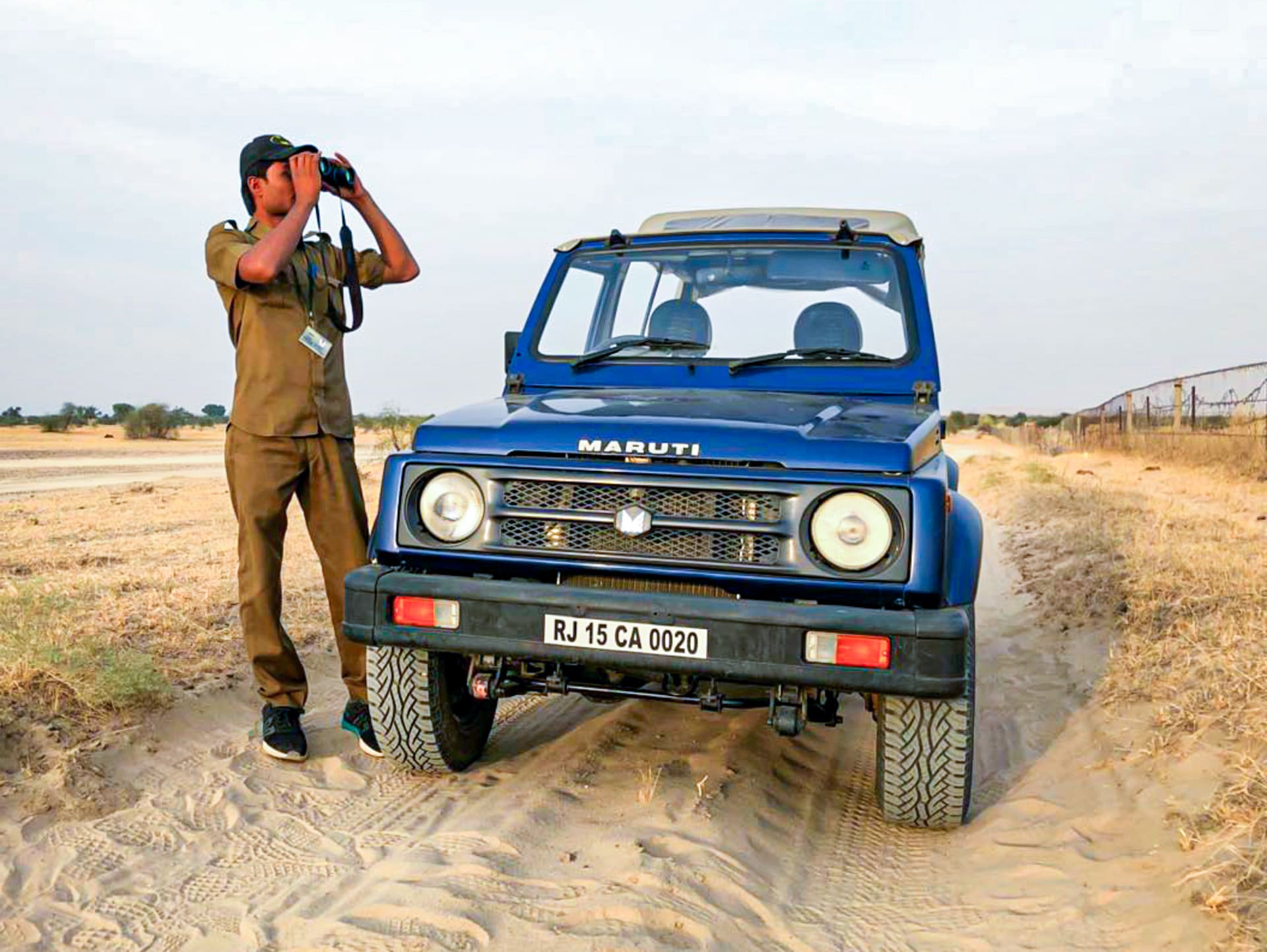 Musa Khan is so sought-after guide that many birdwatchers and photographers are known to plan trips based on his availability. Photo: Asad Rahmani

Khan is now a link, a sort of an ambassador, between the forest department and villagers. Whenever the forest officials have to organise a meeting with the villagers, they call Musa Khan. He also informs the forest officials if he sees anything that is questionable or problematic for the park and its wildlife. These days he is also working with non-profit organisation Bombay Natural History Society, on a project that spreads awareness about the great Indian bustard among local villagers. The forest department is also proud that out of 25 young people they had trained, five continue to work as guides, and Khan is their star.