Peter Smetacek could identify butterflies before he could read. Today, the expert has turned his home into a butterfly museum and research centre for those who wish to soak in their wonder 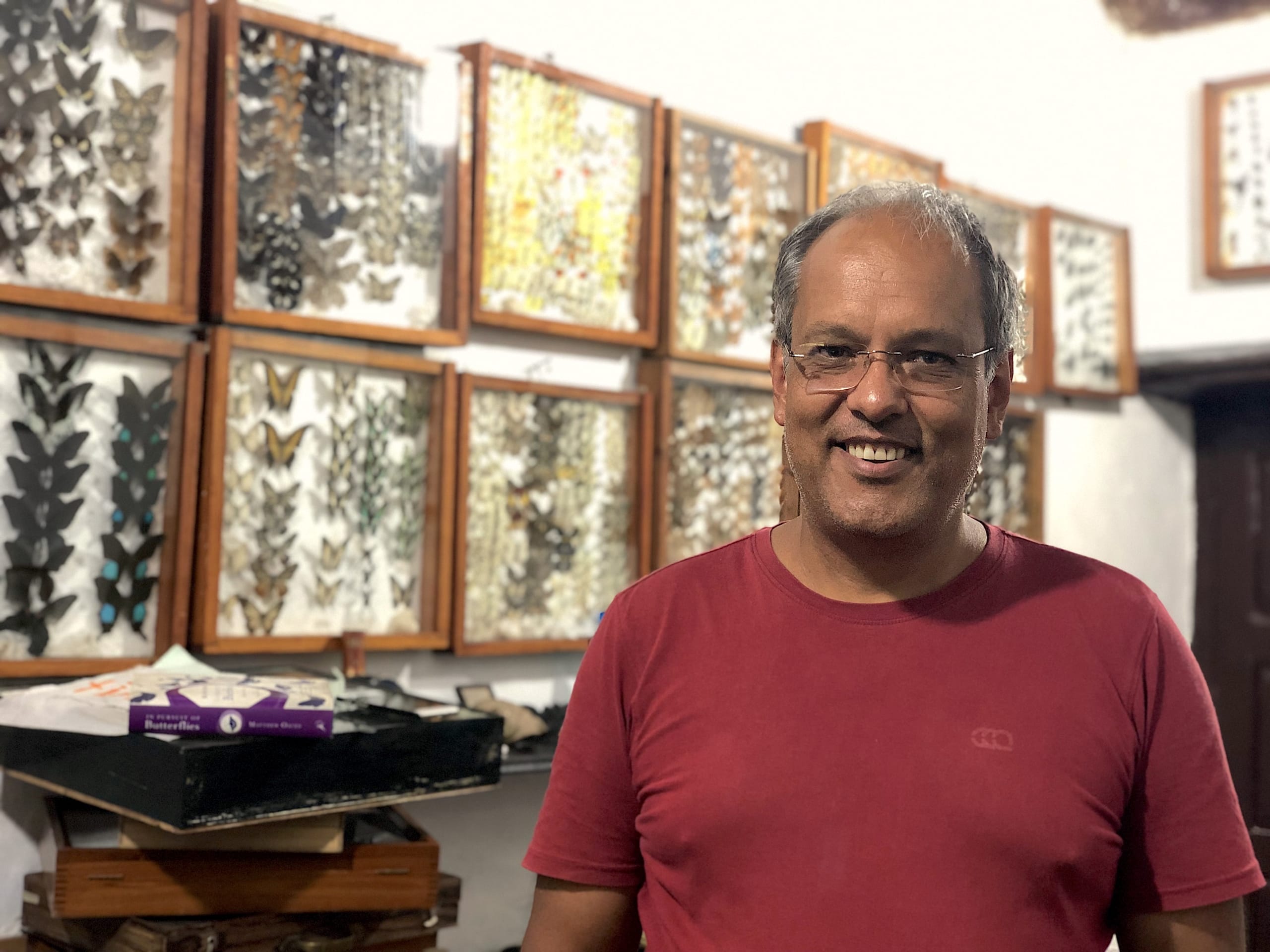 The smell of freshly brewed coffee wafts through the doorway, as my host emerges carrying two steaming mugs. With a big smile, he sets them on the table and plonks himself on a chair. “Let me know if you have any questions.” I have plenty, starting with how he can switch so seamlessly into this relaxed role when only moments ago he was lost in another world — shining ultraviolet light on carefully preserved butterflies to document their iridescence. But for Peter Smetacek, leading authority on Indian butterflies and moths, most of his life has been about balancing the outside world with his private one that brims with his one true love — butterflies. 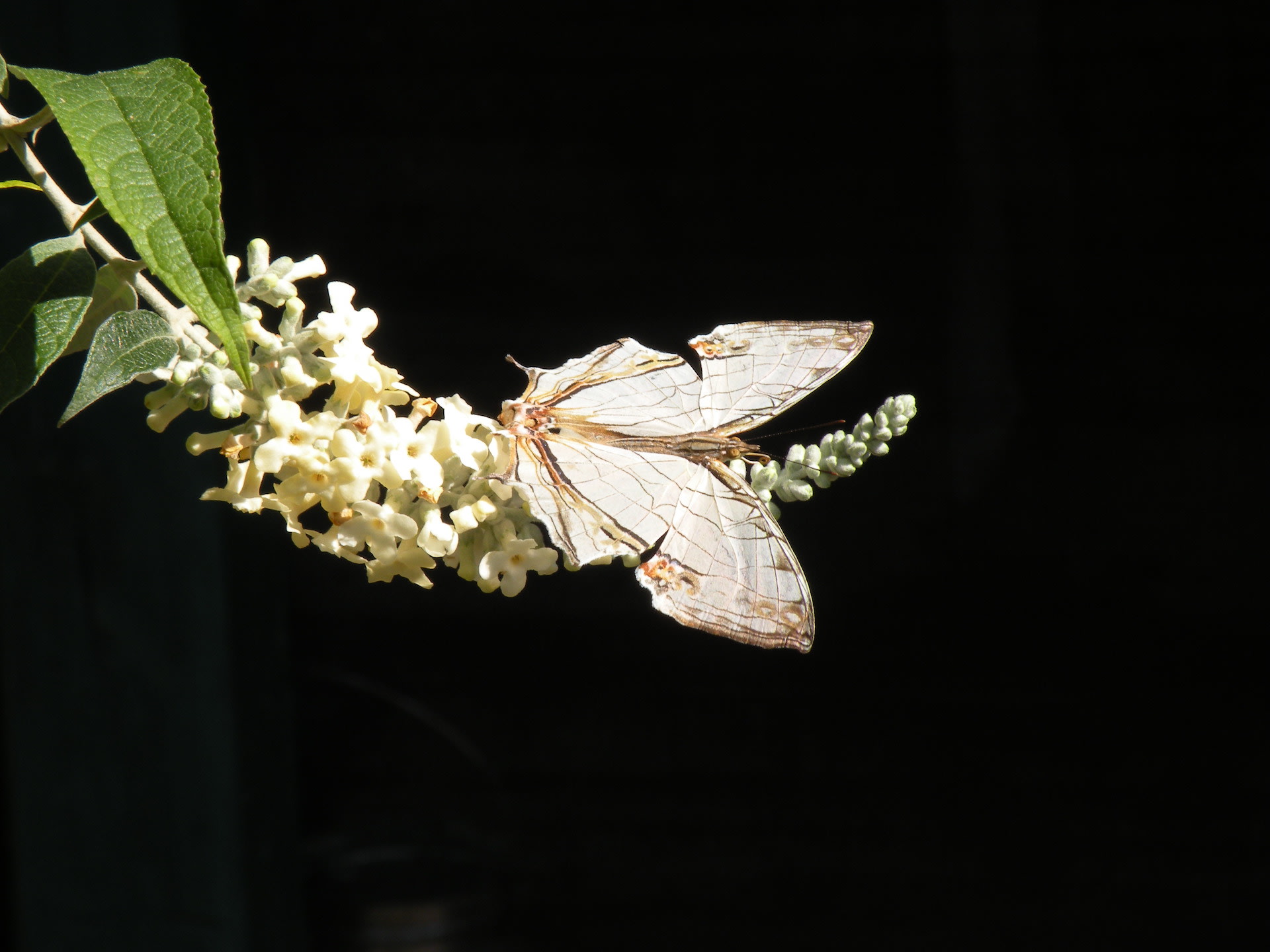 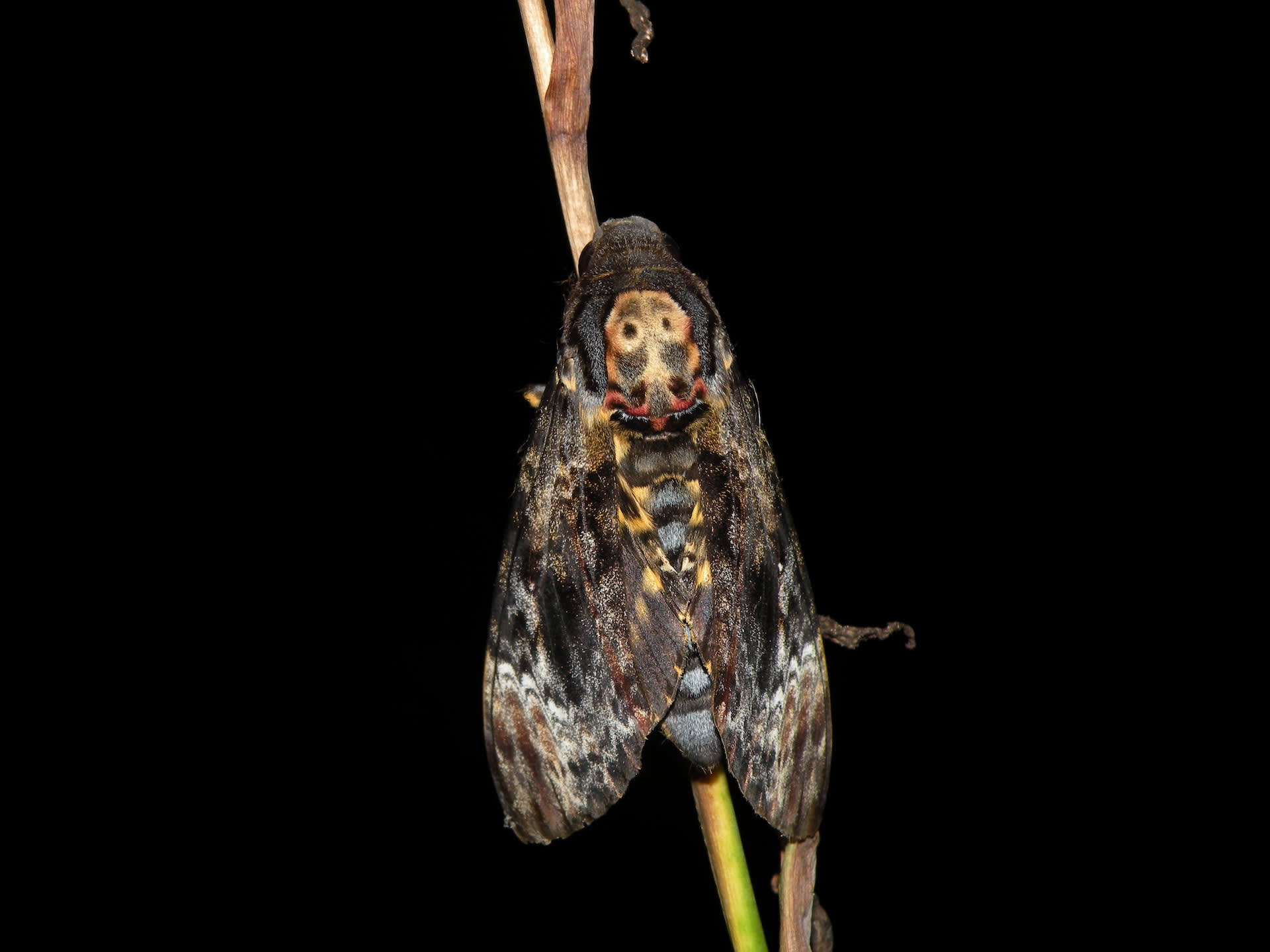 (Left) The common map butterfly (Cyrestis thyodamas) is found in evergreen forests and gets its name from the irregular, vertical map-like lines etched on its delicate wings. (Right) Death's head hawkmoth (Acherontia Lachesis) has an eerie skull-shaped pattern on the thorax. Photos courtesy: Peter Smetacek

Born to a Czechoslovak father who escaped Nazi Germany and an Indian mother, Peter grew up in the quiet lake towns of Nainital and Bhimtal in eastern Uttarakhand. The landscape was reminiscent of the erstwhile forests of central Europe where his father who came from a family of foresters, grew up. In 1945, after World War II, Frederick Smetacek settled down for a quiet life in Kumaon, having had enough adventures for a lifetime. Nainital was where Peter went to school, and Bhimtal was home — both were butterfly havens where he wandered around with a net, catching butterflies and learning their scientific names before he could read. It was a passion he absorbed from his father at the tender age of two, and one that he pursued through his career. Today, he has published over a hundred research papers, the first catalogue of Indian butterflies since independence, a guide to the swallowtail and Apollo butterflies of the Indian subcontinent, and a fascinating memoir of a life less ordinary. 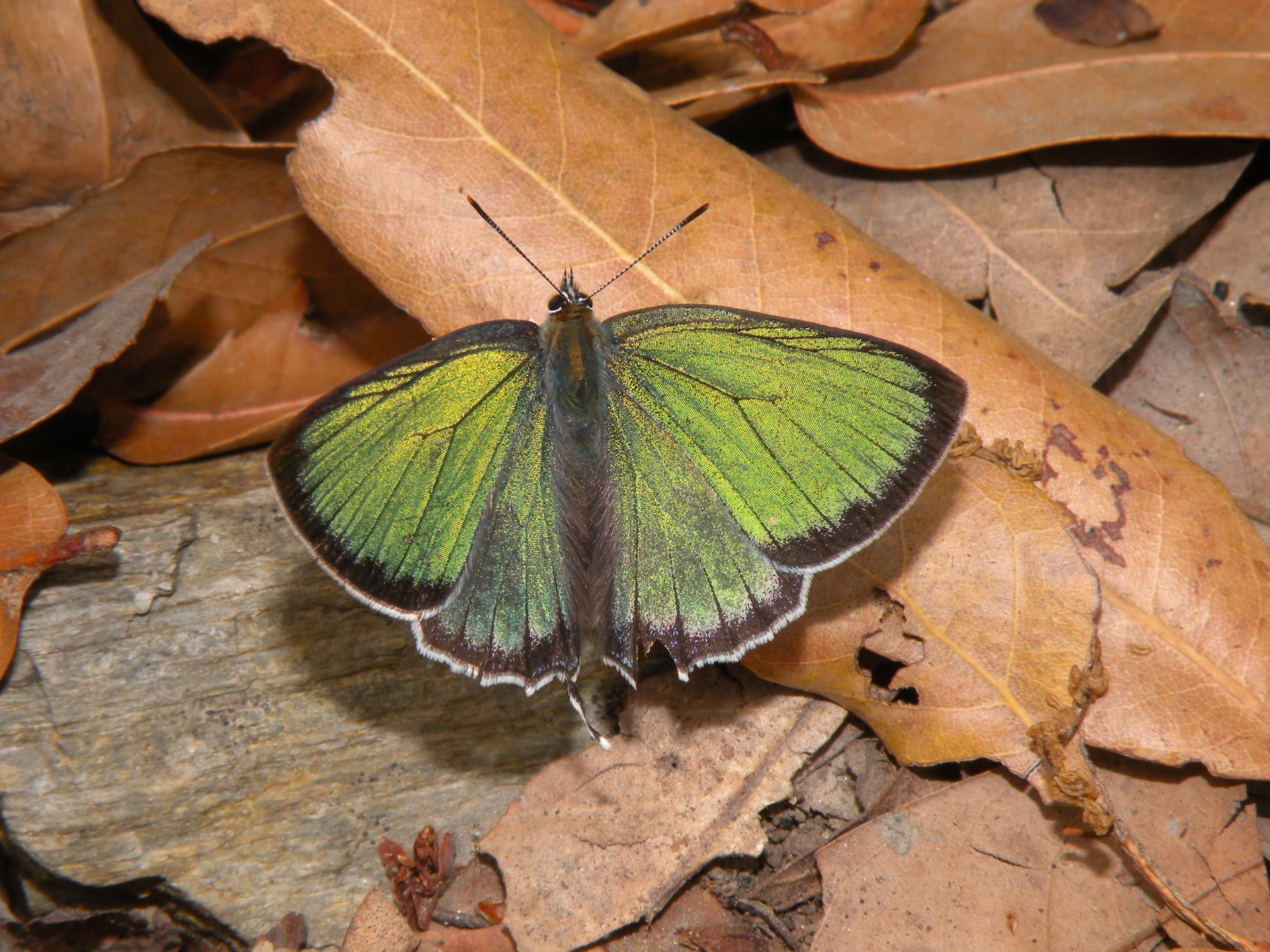 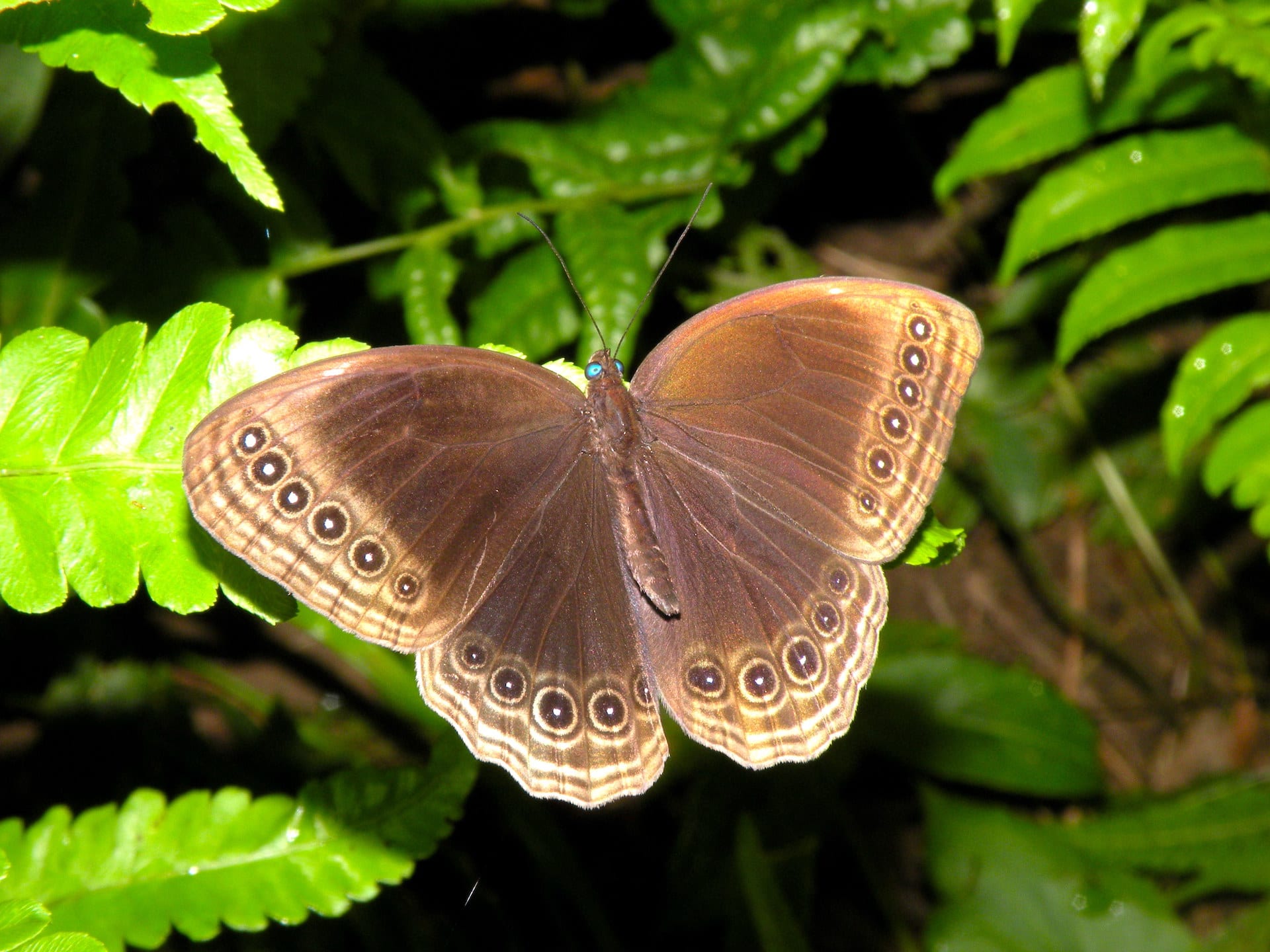 (Left) Silver hairstreak male (Inomataozephyrus syla) is called so because of the silver hair-like markings on the underside of the wing. (Right) Dusky Diadem (Ethope himachala) has a set of eyespots along the edges of its wings. Eyespots, that resemble large, alert eyes, are used as a defence mechanism to scare predators away. Photos courtesy: Peter Smetacek

We finish our coffee and move to the next room, where his collection of preserved specimens is on display in neatly framed glass cases. “Those are peacocks,” says Peter as he shines his laser pointer on a set of butterflies. Papilio bianor, large black butterfly with peacock blue patches and brilliant green bands across the wings is often called one of the most beautiful Indian butterflies. Next, he traces map-like patterns on the wings of the Indian map butterfly, preserved in time like faded, crinkly atlases that hold the key to a veiled world. Enraptured, I glide from box to box as Peter points out each one’s nuances, including a box of origami paper butterflies — near-perfect replicas that he sometimes enjoys tricking his guests into believing are real! This vast collection of over 3,500 species moths and butterflies is mesmerising for anyone who sets their eyes on them.

Butterflies, says Peter, hold secrets within their colours, patterns and shapes, many of which we are frustratingly still not privy to. Each pattern serves a purpose — leaf-shaped ones blend in forests, brightly coloured ones are usually toxic and their striking colours warn predators, while others have painted eye spots on the edge of their wings to throw frogs, birds, and other predators off. The fact that many species are surviving despite climate change and other challenges indicates that designs and strategies are effective. 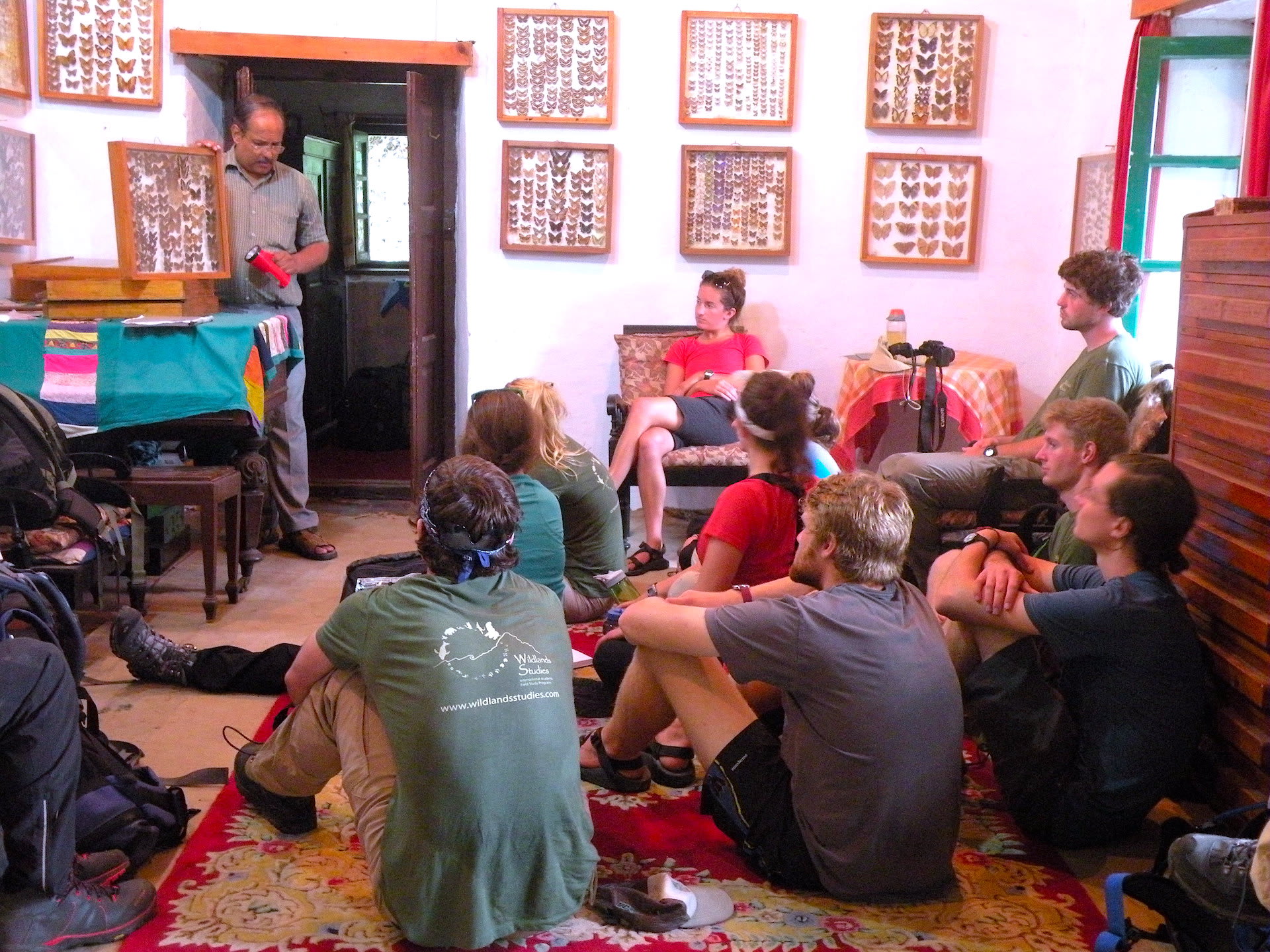 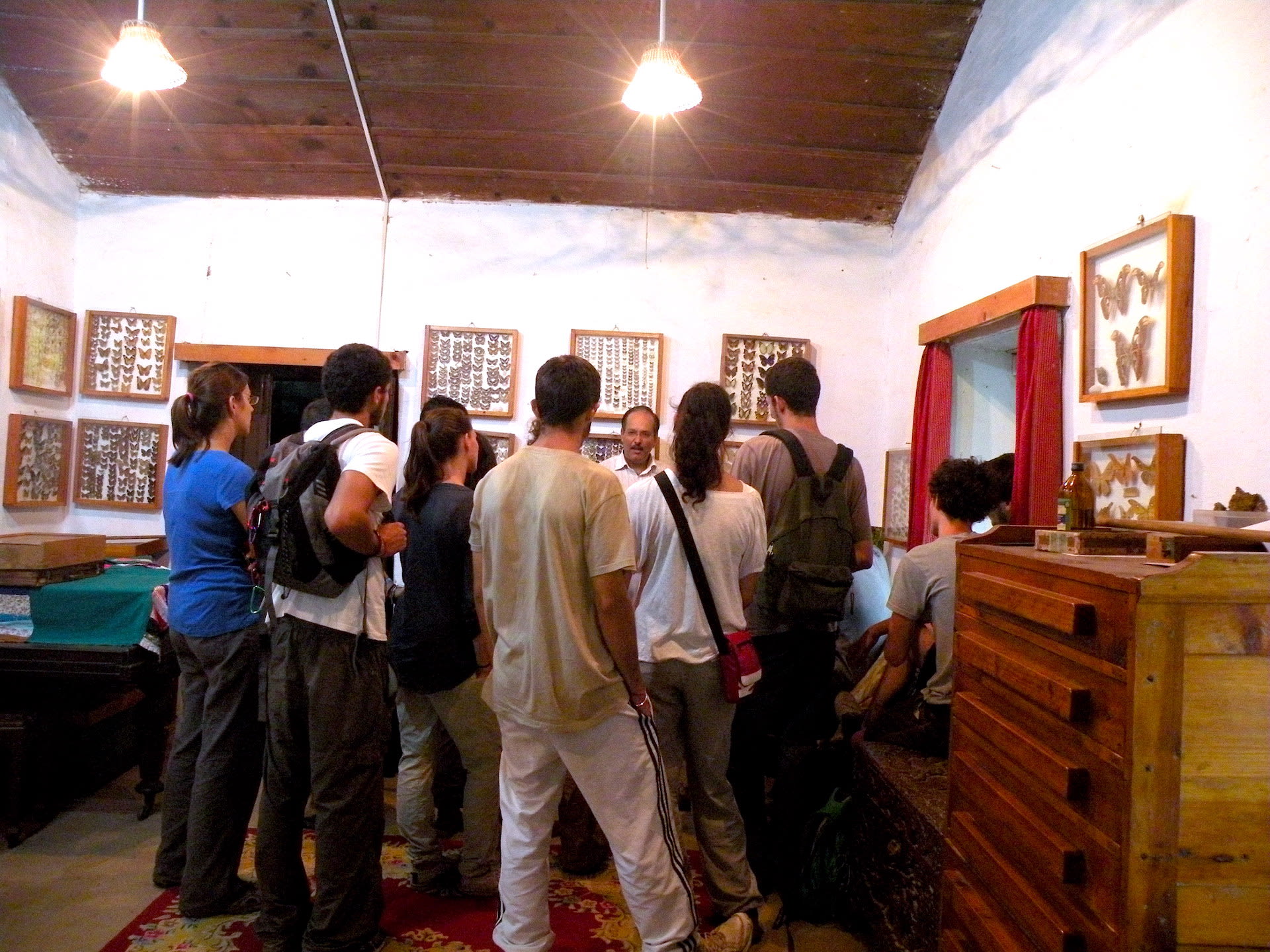 In 2010, Peter converted his home into the Butterfly Research Centre, and museum where he studies butterflies and moths. Today, it is a maze brimming with books, furniture, and bric-a-brac. It is also a glimpse into the world of a man who is one of the leading authorities on lepidoptera, an order of insects that includes moths and butterflies. He pioneered the use of insects as bio-indicators of climate change with a paper published in 1994. But the exciting life of this self-taught butterfly expert has not been without challenges. In 1980s, he had to rebuild a large part of his father’s invaluable collection of moth and butterfly specimens that was lost to museum beetles — a species infamous for feeding on dried animal skins, stuffed birds, and carefully preserved insect specimens. It took Peter several years to gather the lost treasure.

A tour of his collection, the largest private one in the country, is just a sneak-peek into this wonderful world; a longer stay at the estate and interactional learning through one of his annual workshops allows one to delve deeper. It also lets you soak in Bhimtal, the quiet lake town in this sleepy corner of the Himalayas. The estate resonates with stories of his family, his childhood and exciting adventures. For instance, he tells me a story of an orange oakleaf butterfly that broke his 2.5 year-old heart by eluding capture, and another of his quest for golden sapphires butterflies on Naina Peak, the highest peak in Nanital where Peter had to hang on the edge of a cliff to get close to them. It is also where years of his father’s painstaking work was undertaken, which became the basis of Peter’s ground breaking paper published in 2012 that enumerated the 243 species of butterflies recorded from his home, through sixty years of observation. That’s remarkable, considering that of the approximately 1,300 species of butterflies found in India, Bhimtal alone has around 240 species (most European countries only have about 150 species on an average). Recently he has shifted focus to moths and taxonomy, asking some very important questions including the vulnerability of our ecosystems and how for long our depleting wilderness can support its winged wonders. 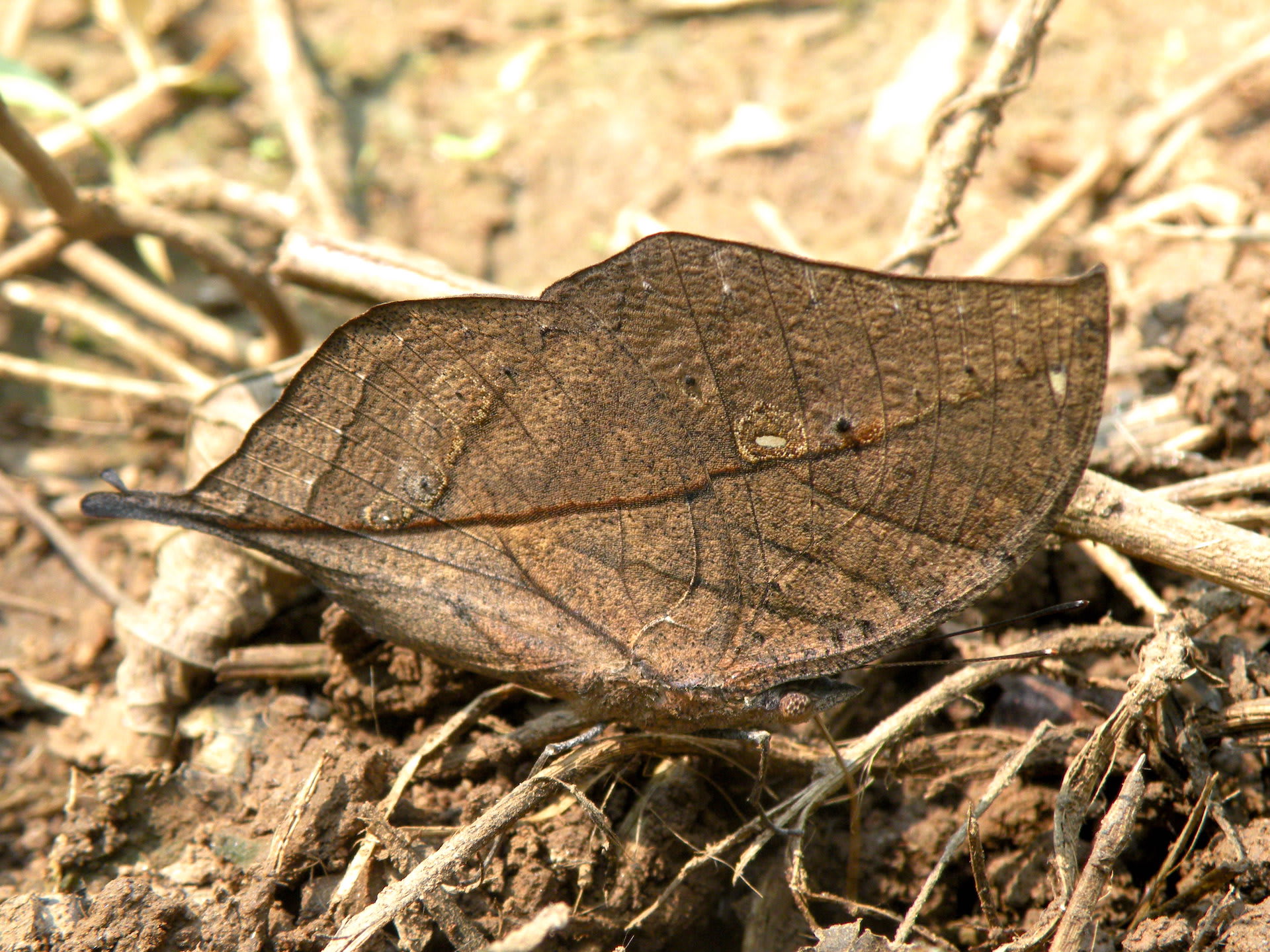 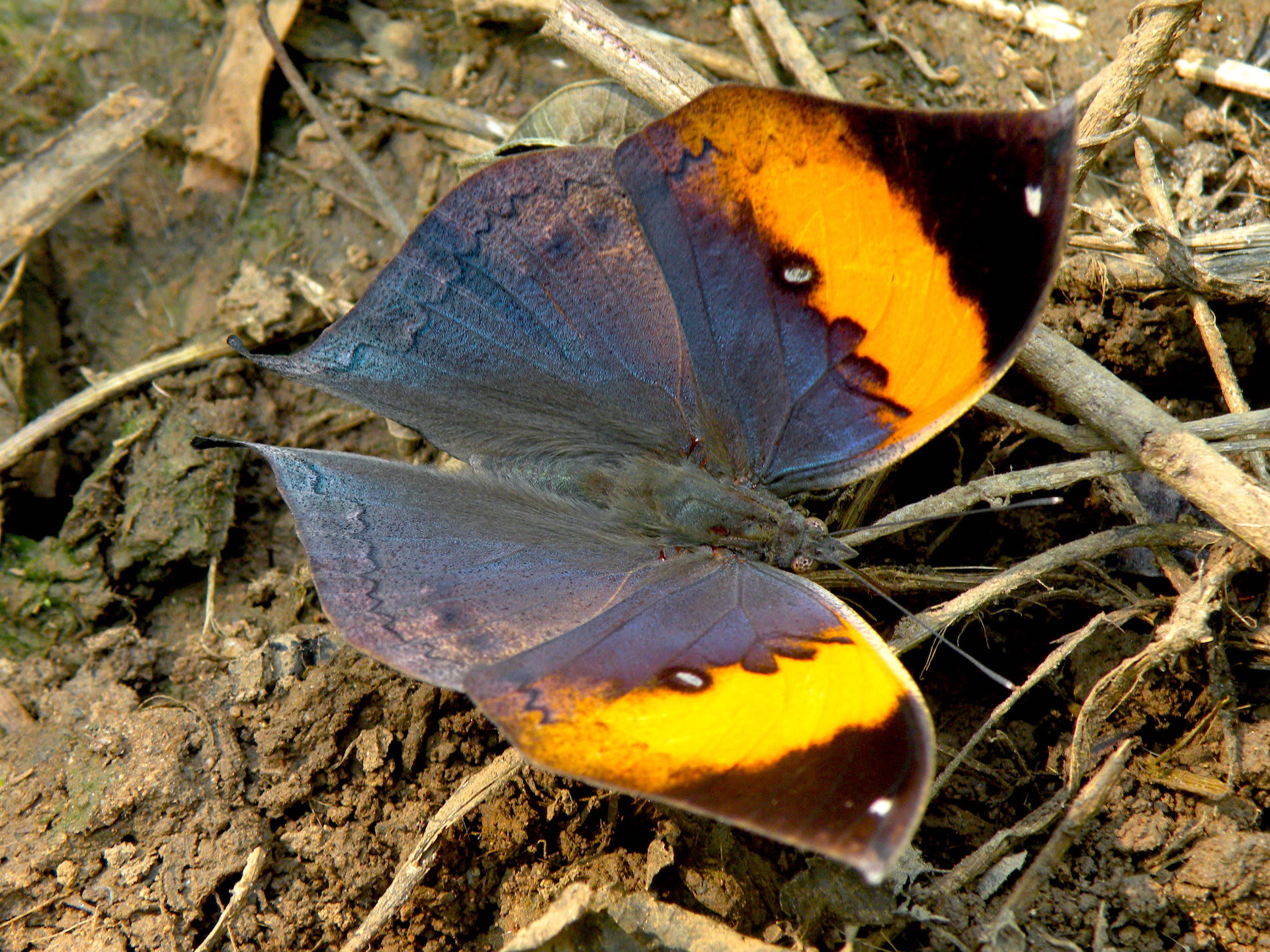 The two images above are of the same butterfly. (Left) The Orange oakleaf’s (Kallima inachus) underside is brown, and veined. It often masquerades as a dead leaf to hoodwink predators. (Right) But when the wings open it shows off striking blue wings with a flaming orange band. Photos courtesy: Peter Smetacek

Much like butterflies that carry a secret message in their colours and patterns, the Butterfly Man is not easy to decode. His frank and honest opinions are often mistaken for brusqueness, but like the brown argus butterfly, Peter is best beheld from certain angles so one can notice the sheen on what seems like a mottled bearing. Most adult butterflies live for only a fortnight, but in what seems like a dishearteningly short lifespan, they fill the world with much beauty and joy. Peter has done the same for generations to come.

Peter Smetacek divides his time researching butterflies back home in the Kumaon Himalaya and in Northeast India. In between, he conducts certified workshops for amateurs and butterfly enthusiasts. To participate, write to him at petersmetacek@gmail.com 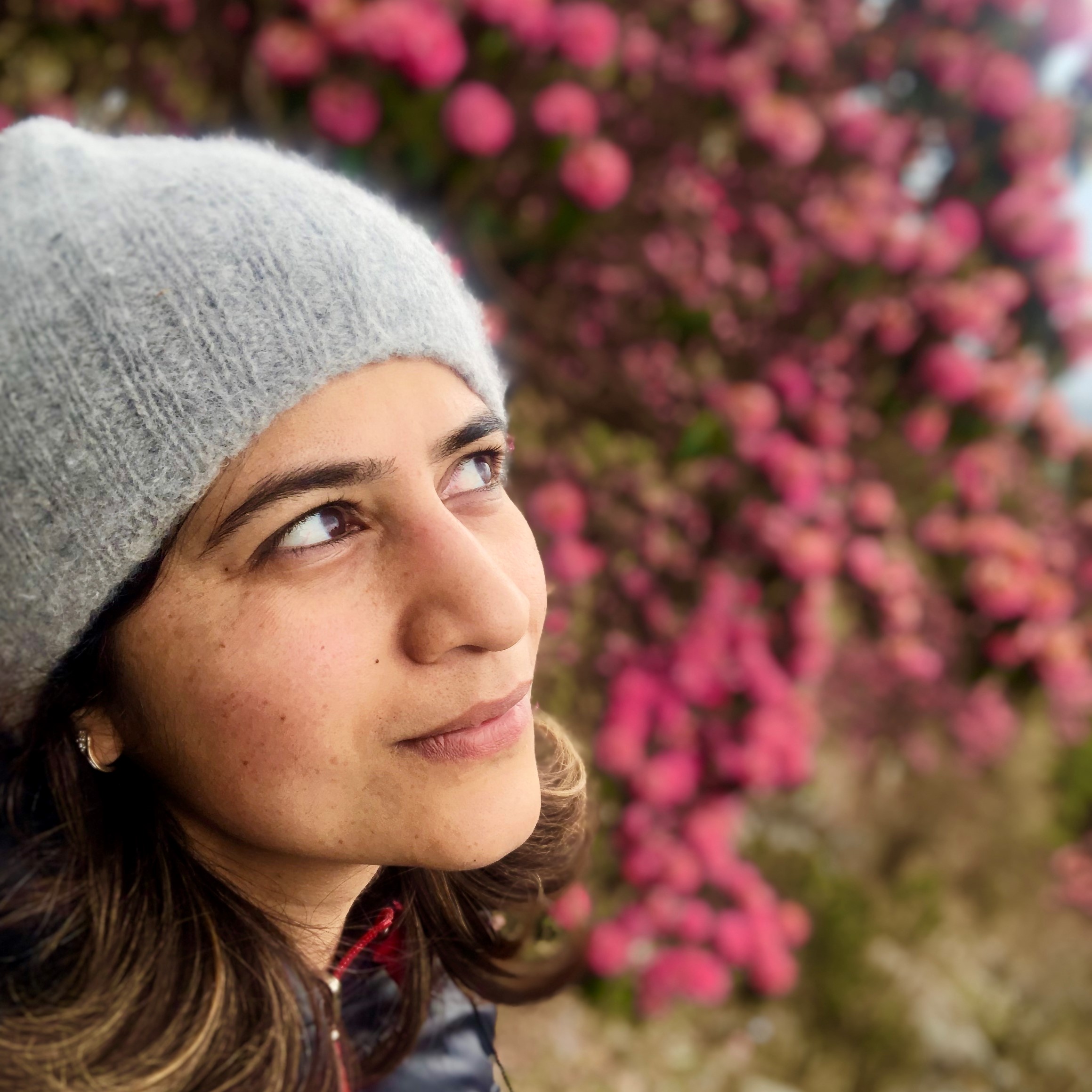 is a travel and outdoor journalist , with an added interest in Himalayan culture and ecology. Born and brought up in the mountains, she is most at home in the woods.