Conservator of degraded landscapes, this self-taught ecologist is at the forefront of reviving wrecked habitats in north India 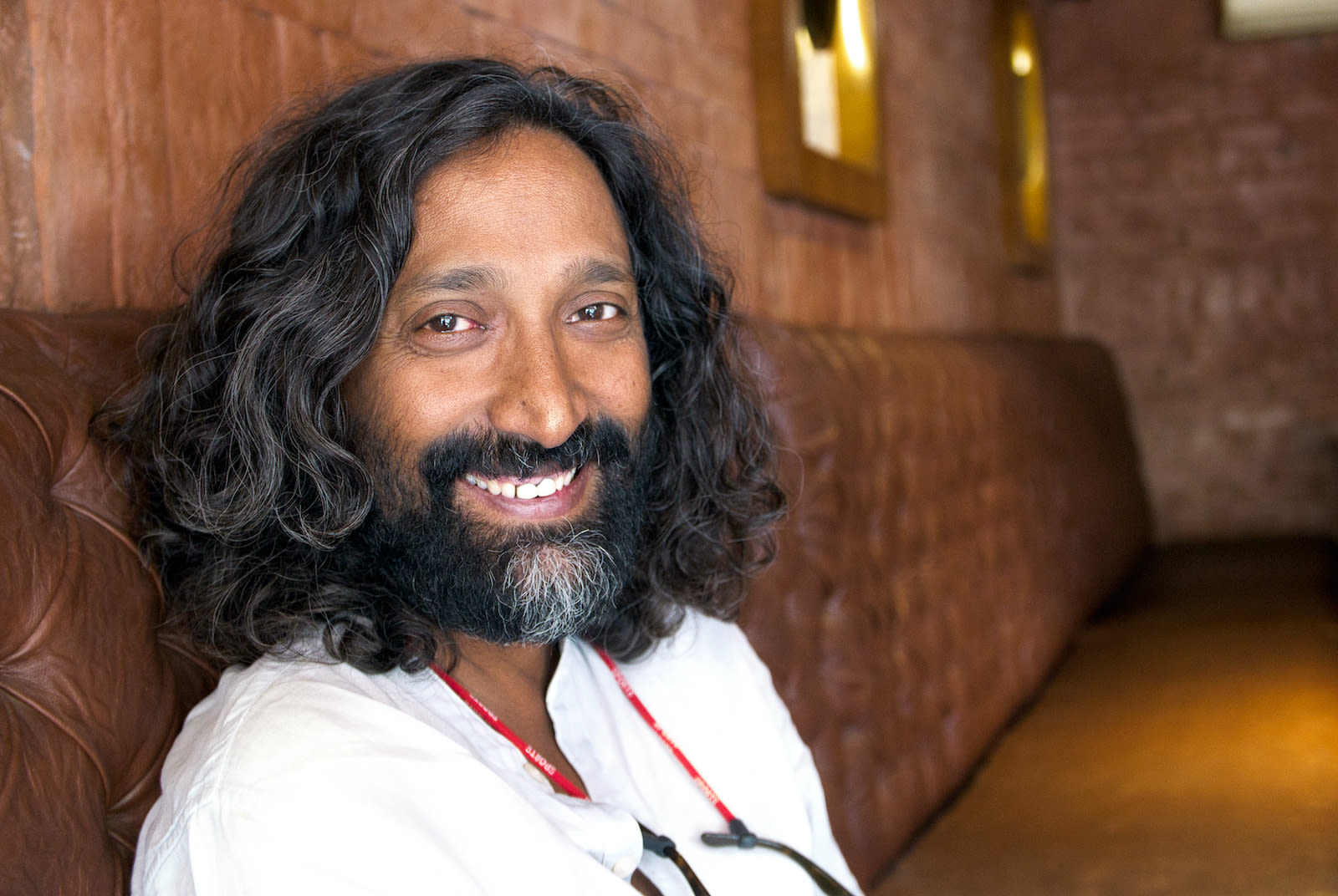 “It’s almost like painting a large canvas,” Vijay Dhasmana says, as he explains what rewilding entails. A self-taught ecologist, he specialises in rewilding projects that bring back native flora and fauna into landscapes that have become severely degraded. His biggest project and achievement is the transformation of a 380-acre abandoned mining site at the edge of Gurgaon into a city forest called the Aravalli Biodiversity Park.

Dhasmana was first exposed to the “environment vs development” debate in 1995 when US-based Enron Corporation began building a coal-based power plant in Dabhol, Maharashtra. After championing the cause of the environment in Maharashtra, he returned to his home state of Uttarakhand in 1997 to participate in the Jal Andolan padyatra and stayed back to understand and engage with environment issues in the state. It was here that he met Chandi Prasad Bhatt, Sunderlal Bahuguna, Govind Singh Rawat, and other leaders of the Chipko Andolan, India’s first environmental movement.

(Left) A chance meeting with naturalist Pradip Krishen in 2005 set him on the path of restoring and rewilding degraded landscapes in Uttarakhand, Rajasthan, and the National Capital Region. (Right) A self-taught ecologist, he feels it is critical to study and understand native plants found in a landscape before setting out to restore it.
Cover photo: Despite the many setbacks he’s faced as an activist for the environment and spokesperson for native flora, 47-year-old Vijay Dhasmana, who was born in Bayali village in Uttarakhand, is hopeful about the future.

Dhasmana began learning more about forest and conservation issues in Uttarakhand. He got an opportunity to work on conservation of the Doodhatoli forest. Part of his work involved documenting the lives and sources of livelihood of the villagers to understand the nature of their dependence on the forest.

Moving to Delhi in 2005, he had a brief stint with the Wildlife Trust of India, where he led a programme with projects across the country, including the conservation and rehabilitation of sloth bears. He met naturalist Pradip Krishen in the same year, which set the course for his rewilding journeys. The duo started travelling together and worked on various projects in the National Capital Region (NCR), Binsar, Mukteshwar, and Jaipur. Among these, it is the Aravalli Biodiversity Park that holds a special place in his heart.

“I chose the location for every sapling that I planted at the Aravalli Biodiversity Park. We grew almost 200 species of plants native to the northern Aravallis and added them to the landscape,” he says, with distinct pride in his voice, over a phone conversation. “Today, we have a working nursery. The forest is regenerating. The plants are resilient to the climate. There is a thriving population of wildlife. The Haryana government now wants to build three more biodiversity parks in the district,” he adds.

Though the park’s proponents, a voluntary group called “iamgurgaon” (IAG), didn’t entirely understand his vision initially, they liked the language he used to convince them. One of the things Dhasmana said to them was that bringing the forests of the Aravallis back to Gurgaon, a city built by decimating natural resources, would be the right thing to do. 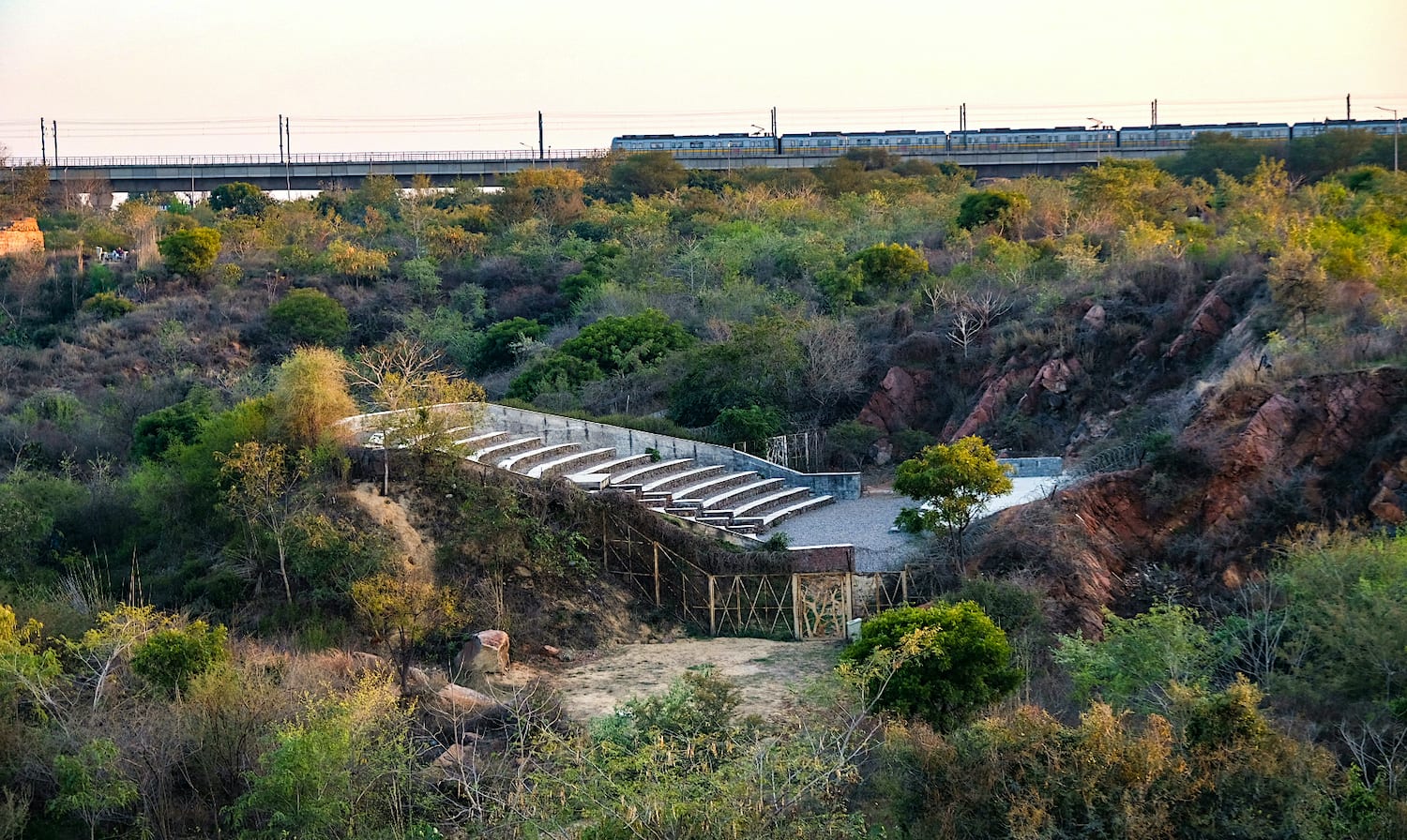 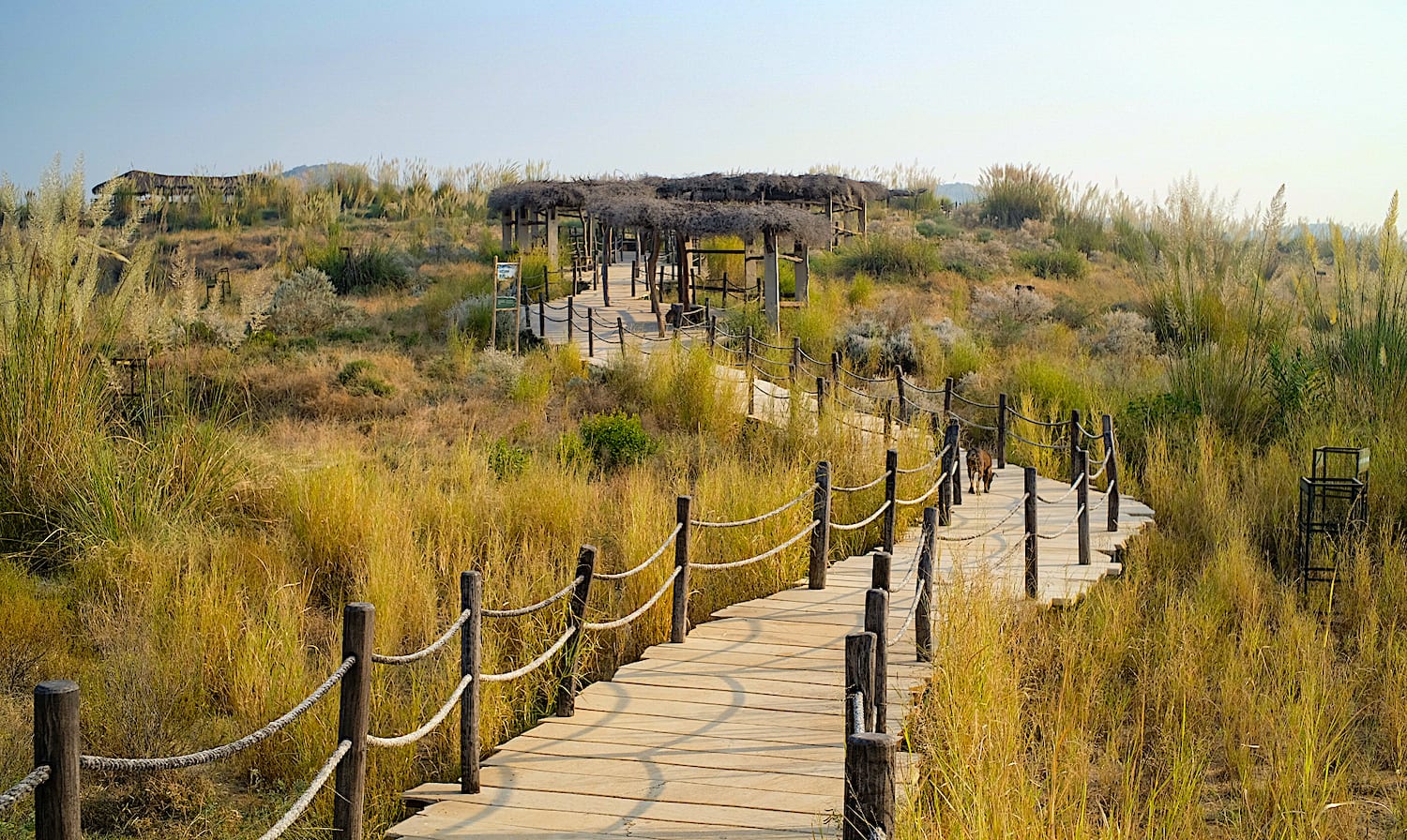 (Left) Dhasmana played a key role in transforming a 380-acre mining site in Gurgaon into a lush wilderness known as the Aravalli Biodiversity Park. (Right) He also assisted “tree man” Pradip Krishen in bringing back Roee (shrublands of the Thar desert) to the barren sand dunes of Kishan Bagh in Jaipur.

Dhasmana feels that while everybody is keen on planting trees, we have still not embraced the idea that ecology and habitats are important. “It is now (almost) universally accepted that ‘planting trees is good’. We are driven by the human-centric consumeristic approach that trees give us oxygen and water, therefore one must plant them. However, I feel it is an incomplete approach, and can be dangerous, especially when you plant the wrong species in inappropriate terrain,” he points out. According to him, the need of the hour is for the revival of habitats and true forests (with native shrubs, herbs, climbers, and wildlife) to become part of popular parlance.

Dhasmana explains that rewilding focuses on the ecology of the region and is mindful of interrelationships in nature — how plants, insects, birds, and animals interact with each other. He stresses that in order to build a self-sustaining ecosystem that can survive in the long-term, creating natural habitats is the way forward. It may be a time-consuming enterprise, but the cost-benefit far outweighs that of planting water-guzzling exotics.

“Rewilding projects can be undertaken only in large landscapes that are of public utility and whose custodians are governments. By successfully undertaking restoration projects such as the Aravalli Biodiversity Park, Sikandarpur Watershed, Chakkarpur-Wazirabad Bundh in Haryana, and Kishan Bagh in Rajasthan, we have been able to convince government officials that we can restore degraded landscapes,” he says. 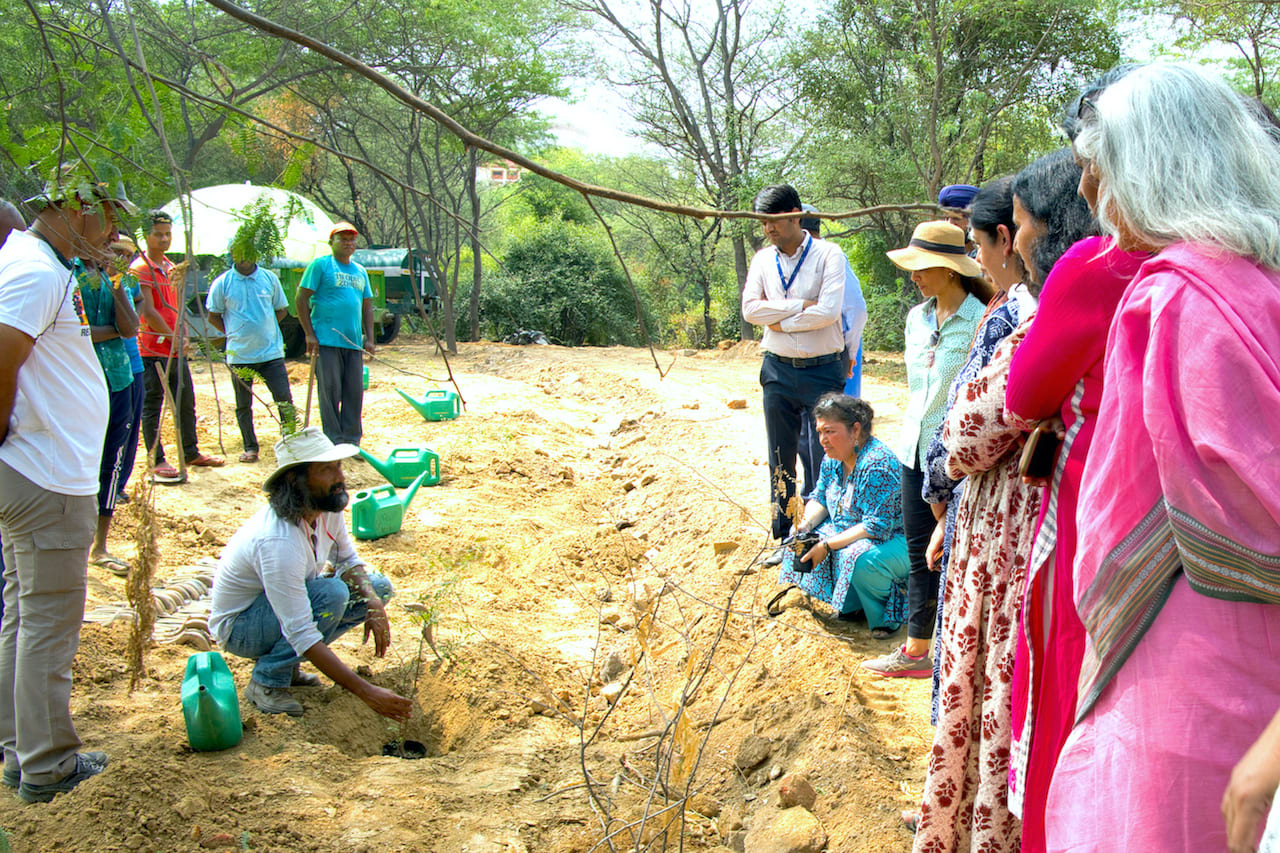 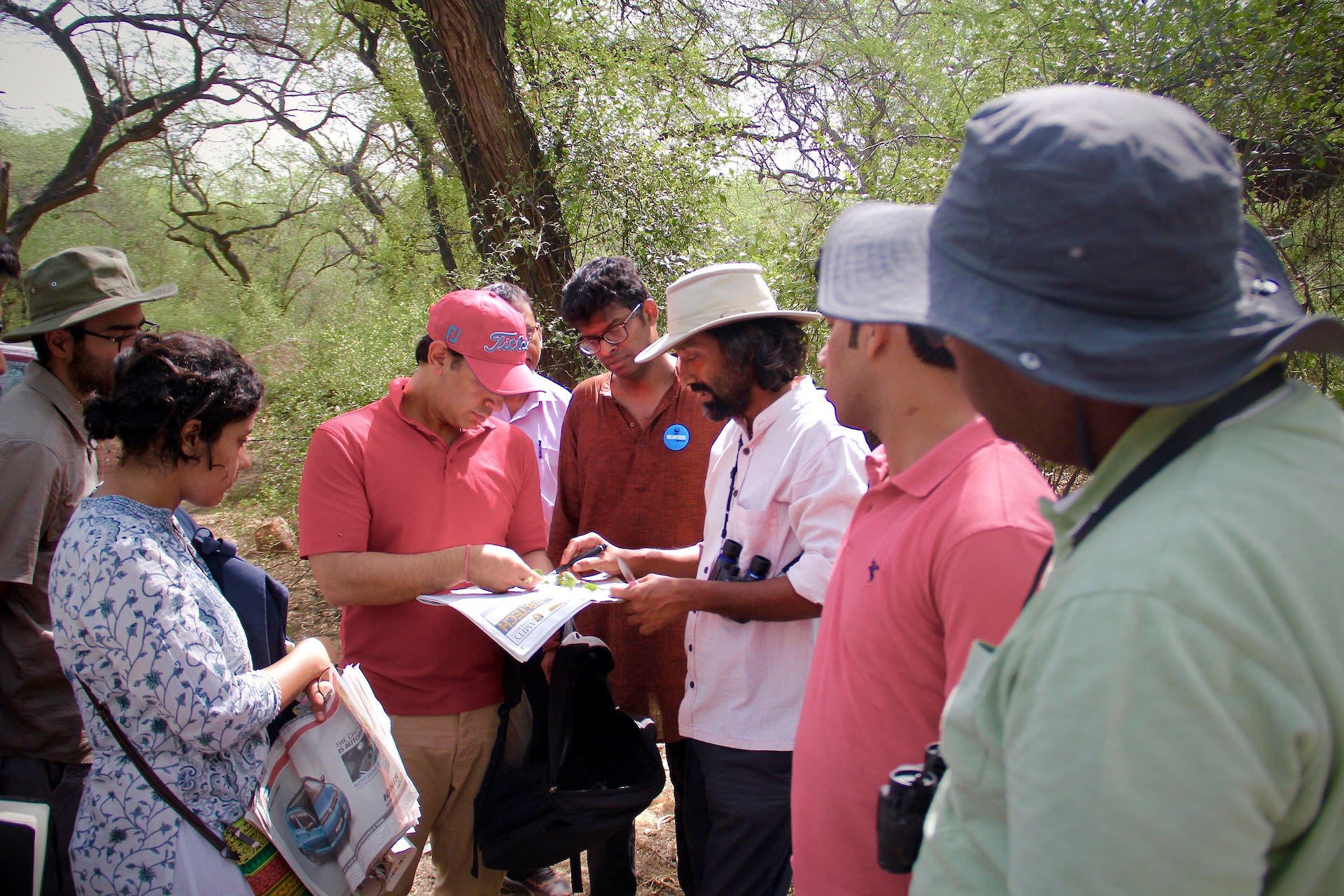 Dhasmana holds regular workshops and walks in the National Capital Region to spread the word about the importance of
native plants.

Protection of existing forests is equally critical for Dhasmana, who feels that every city should have more than one urban forest. “We are slowly learning that a city has its own ecology and its own wildlife. We must make our cities inclusive by nurturing wild spaces and linking them to each other through corridors for wildlife to move freely,” he suggests.

For the past 15 years, Dhasmana’s focus has been on the Aravalli and Thar landscapes of northwest India. He is quick to clarify that he wasn’t drawn to these landscapes because of their old-world charm, but instead, by the opportunities that came his way. “I’d be happy to work in any landscape that is degraded. When I see a degraded landscape, I visualise its potential, its withheld beauty. I try to learn about the plants that can grow there.”

From the frequent changes in the tonality of his voice, it’s clear that Dhasmana has been an activist all his life. Every now and then, he sounds like he is addressing a crowd at a rally, instead of an inquisitive writer on the phone. From his early days of resisting Enron’s project in Dabhol to protesting the Central Vista redevelopment project in New Delhi before the COVID-19 lockdown was imposed in 2020, Dhasmana admits that it’s been a difficult journey, with plenty of roadblocks. 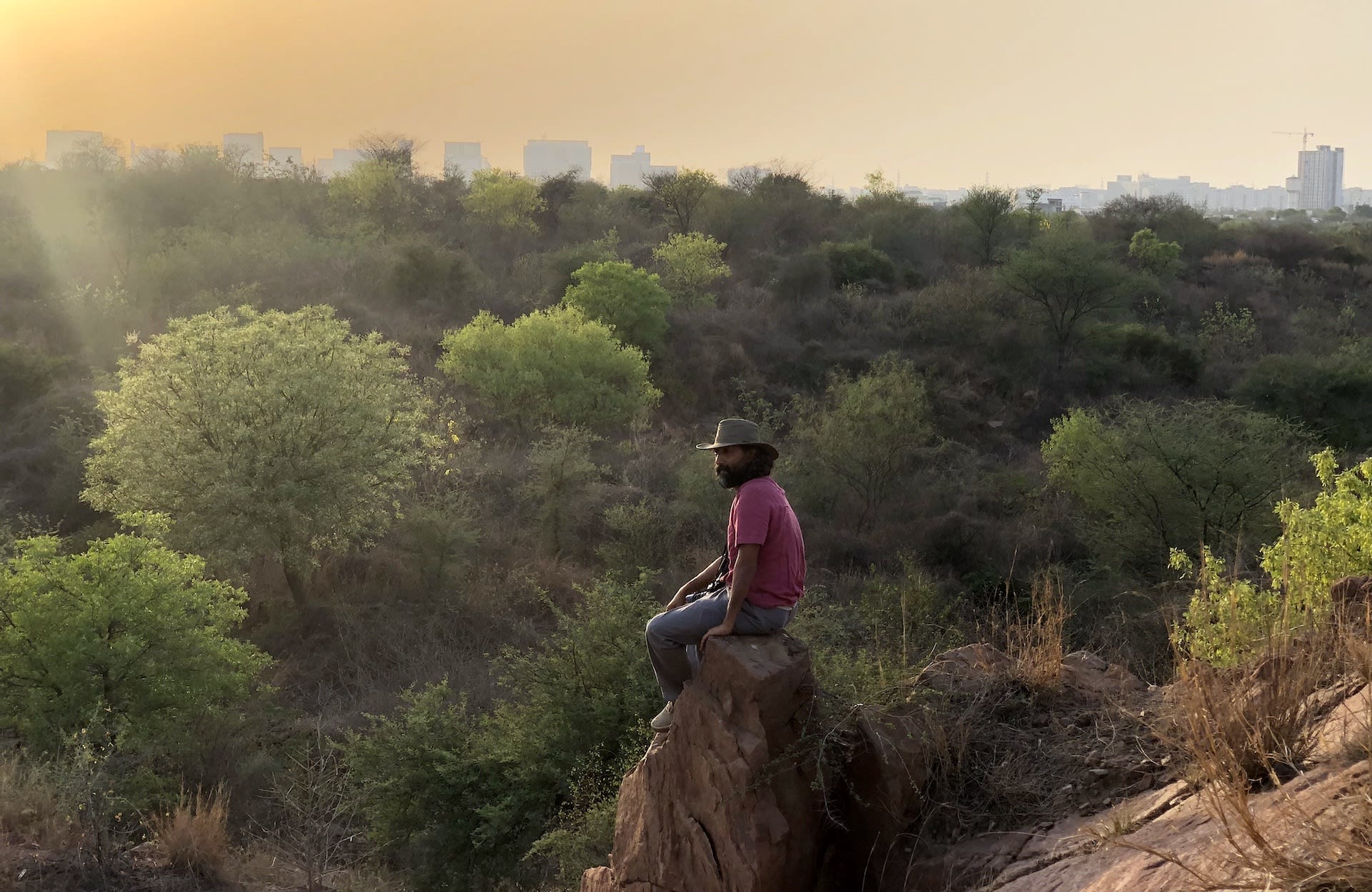 A large part of Dhasmana’s work in the past 15 years has focused on restoring degraded landscapes of the Aravallis, the world’s oldest fold mountain range.

However, Dhasmana has also enjoyed a fair share of triumphs along the way. He has participated in several successful movements: to halt P&O Australia from constructing a mega port in Dahanu; to convince the Chief Minister of Haryana to expand the buffer zone of the Mangar Bani forest; and to prevent solar power companies from destroying sacred groves in Jaisalmer. Despite the state of the environment looking bleak in the country, Dhasmana is hopeful. He attributes his optimism to these victories, which provide fuel for the battles ahead.

For Dhasmana, activism and outreach go hand in hand. He conducts a programme called “Barefoot Botanist” in collaboration with the World Wide Fund for Nature (WWF), to sensitise people to the native plants of the NCR. He also holds regular walks and workshops for landscape architects and officials of the Haryana forest department and biodiversity board. But nothing gives him as much satisfaction as rewilding degraded landscapes. I can hear the joy in his voice when he says, “I have been very privileged to have had the opportunity to revive habitats. It is the most fulfilling thing I have done. I travel from Noida to Gurgaon almost every day to tend to the plants at the Aravalli Biodiversity Park. I love it so much.”