On the Hunt for the Semi-aquatic Anacondas of Brazil

Scouring the slow-moving waters of the Brazilian Pantanal to observe the super-sized green anaconda.

Called sucuris in Brazil, the green anaconda is a gigantic semi-aquatic snake that is found both in water and on land. It thrives in the swamps and slow moving rivers of the southern Pantanal in Brazil, 40 kilometres from the town of Bonito. The Pantanal is one of the largest freshwater marshes or wetlands on Earth.

Anacondas are members of the boa family, and are non-poisonous snakes found only in Central and South America. They use their enormous girth to crush their prey, which they then swallow whole. They have incredible muscle mass and are the world’s heaviest snakes, and among the longest.

In order to see and photograph these unusual and amazing giant snakes photographer Dhritiman Mukherjee scoured the slow-moving waterways of the Pantanal on a boat, and then scuba dived for 20-30 minutes each time he spotted a snake.

Anacondas are hard to spot because of their excellent camouflage. Green anacondas can grow upto 30 feet in length. During this expedition, the anacondas spotted were a maximum of 15 feet long.

Despite all the frightening stories surrounding this snake the anaconda is not a perpetually hungry predator. In fact once it has eaten a sizable animal it does not eat for weeks, or even months. Once its prey has been swallowed it is broken down and consumed, a slow process that takes a very long time. During this time of digestion anacondas become relatively immobile and can be quite vulnerable. Though their reputation precedes them, they are not as scary as portrayed, and may in fact be quite wary of humans. 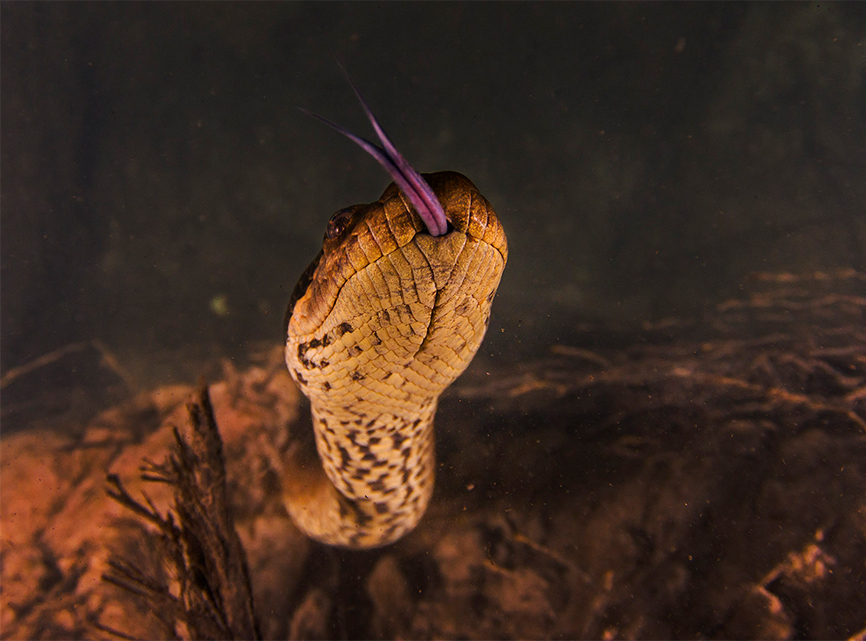 A green anaconda flicks its tongue against the glass dome port of the photographer’s underwater camera. Anacondas, like numerous other snakes, understand their world through chemoreceptive detection. They sense vibrations and the information gathered is transferred to the Jacobson’s organ at the roof of the mouth where it is deciphered.

Near the town of Bonito in southern Brazil, a river runs through the marshy grassland and woodland forests of the Pantanal. In these channels lives the elusive giant, the green anaconda, well camouflaged and hard to spot. Using a small boat with a battery-operated motor that is very silent, an expert tracker stands on a high ladder mounted on the boat scouting for resident anacondas. 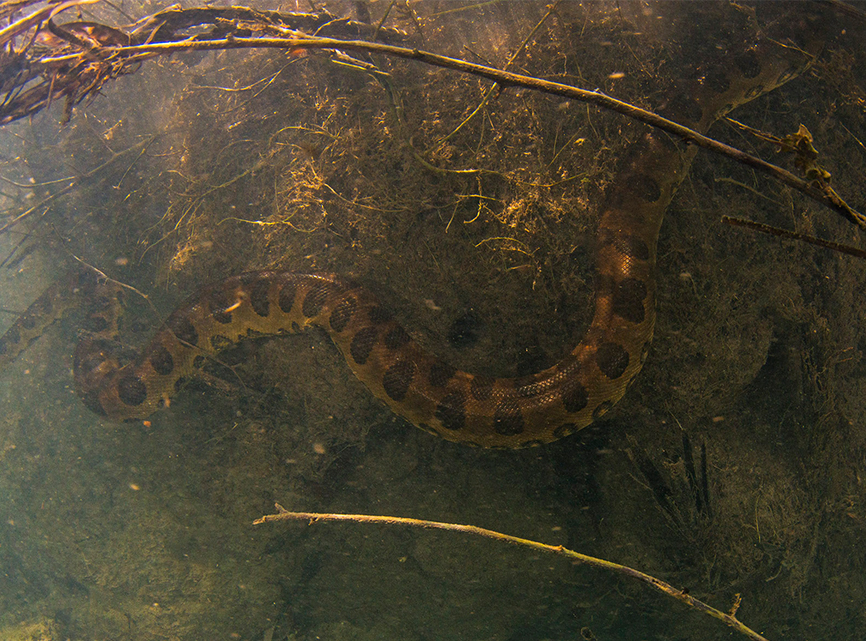 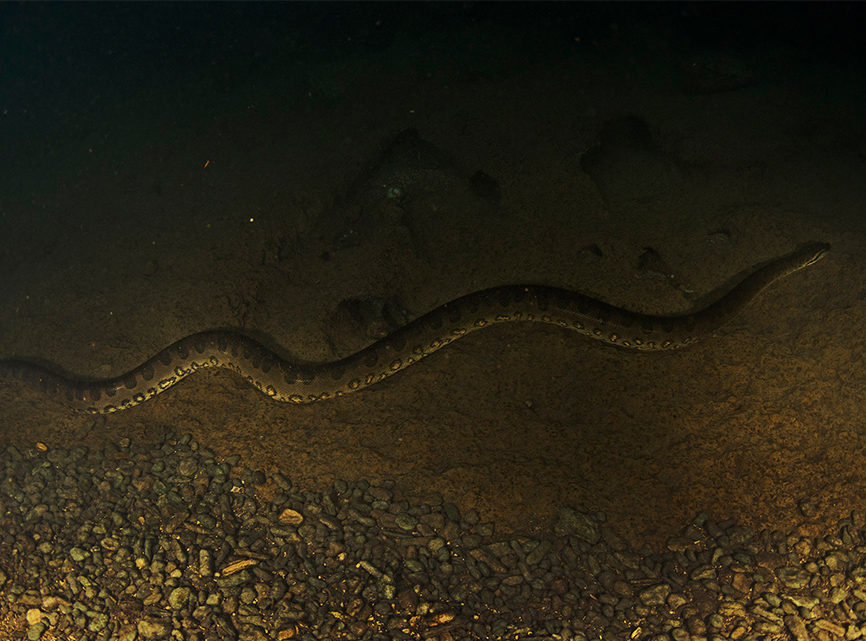 Though anacondas are not the world’s longest snakes, they are the fattest. They are known to grow up to 200 kilos and 29-30 feet in length. These powerful creatures live in the waters of slow moving, relatively shallow rivers and channels or in thick vegetation. They will also climb trees in some situations. An interesting feature of the green anaconda is that females are much larger than males and can weigh up to five times more.

Green anacondas are semi-aquatic and hunt both below the water and above it. This twenty-foot long female anaconda is submerged with only the head sticking out above the water’s surface, allowing it to breathe. Unique adaptations that permit such behaviour include eyes and nostrils that are positioned atop the head. It has air sacs near its lungs, which allow it to stay underwater for up to 10 minutes at a time without the need to come up to replenish its air supply. 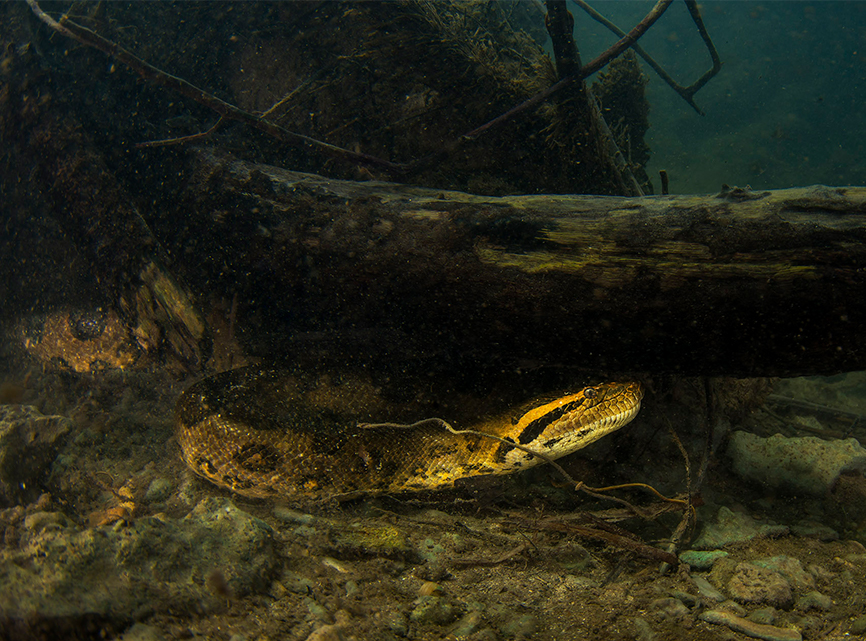 Anacondas come downriver with the currents. They glide with ease at the bottom of the riverbed. When on land their immense girth does not permit such ease of movement. However, they do like to come on land particularly to bask in the sun. They also have to be careful as the jaguar is known to prey on this predator.

The Pantanal’s rivers are rich with fish. One of these is the piraputanga or brycon microlepis. These large fish thrive in these freshwaters eating mostly fruits and seeds. They tend to follow the path taken by monkeys who drop pieces into the water as they eat. Incredibly, they are able to make small jumps out of the water to feed on fruit from low hanging branches. They also eat meat—smaller fish and other invertebrates. Their large size makes them prey for the anaconda which will attack, constrict, and swallow it whole. 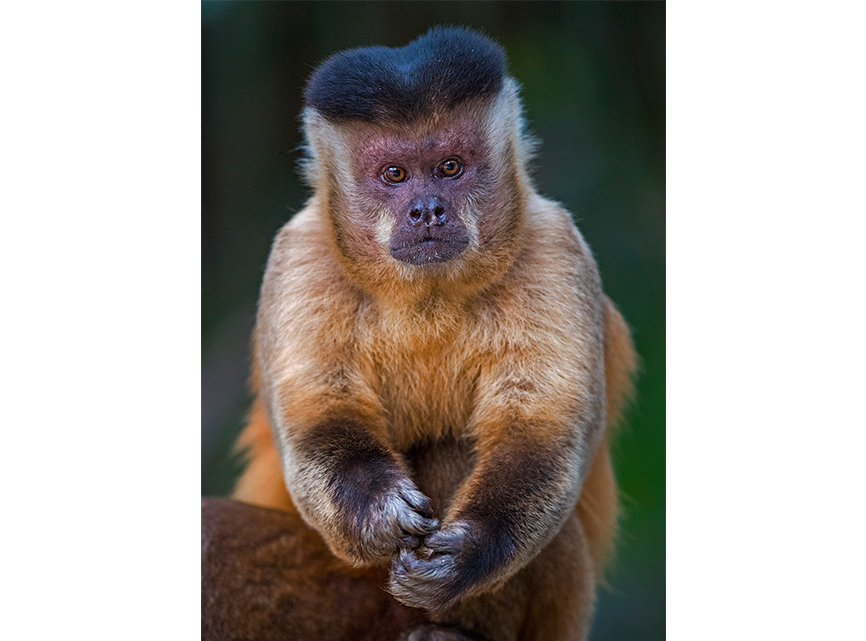 Anacondas prey on animals that come to the banks to drink water. They hide underneath the surface and pounce on capuchin monkeys like this one; tapirs, wild boar, deer, capybara, turtles, and even caimans and jaguars are all fair game. They grab and lock their teeth on the prey, then rapidly wrap themselves around and kill it by squeezing and asphyxiating it before swallowing it whole. A large animal, such as a 100-kilo capybara or a caiman, can keep an anaconda full and satisfied for months and it will not hunt again until hungry.

Once an anaconda is spotted in the murky waters, the boat stops and the divers enter and gently follow it, trying their best not to disturb it or provoke it in any way. Photographing the anaconda is a long, slow hunt over days. Photographer Dhritiman Mukherjee gets close to a curious anaconda who flicks its tongue to get a sense of what lies ahead of it.