In the freezing waters of the Arctic, photographer Dhritiman Mukherjee finds fascinating creatures, great and small

Greenland is an unusual country in many ways. For one, it is the largest island on the planet. Secondly, over three-fourths of Greenland is ice, mostly in the form of a single, large ice sheet covering “1,833,900 square km”, according to Encyclopaedia Britannica’s website, with “an average thickness of about 5,000 feet.” Greenland is surrounded by the Arctic and North Atlantic oceans, an area studded with mammoth icebergs, sculpted by wind and sun. And third, because Greenland has a very small population: All of 58,000, making it the least densely populated country on Earth. Incidentally, Greenland is an autonomous but dependent territory of Denmark.

Greenland has remained largely isolated from the rest of the world. Recently the land of icebergs and humpback whales has been in the news for political and environmental reasons. Turns out, “Greenland has some of the largest deposits of the so-called rare earth metals, such as neodymium, praseodymium, dysprosium, and terbium,” says an article published by the BBC in January 2020. “These are increasingly used in the manufacturing of mobile phones, computers, and electric cars,” For these reasons, Greenland has caught the attention of global heavyweights, China and the US (Trump recently announced he wanted to “Buy Greenland” from Denmark; the Danish Prime Minister responded, “Thank you, not for sale.”).

The other reason Greenland has been receiving attention of late, is climate change. Since so much of the country is ice, Greenland is particularly vulnerable to global warming, which is altering the nature of the landscape here, but also impacting the rest of the planet. Studies say that Greenland alone could account for a 7 cm-increase in global ocean levels, which would render thousands, if not millions of people, homeless. This is further testified by a report by the Intergovernmental Panel on Climate Change (IPCC), which states that “rising water levels are now being driven principally by the melting of Greenland and Antarctica.”

What will this mean for Greenland’s residents, human and otherwise? It might seem like an icy realm to us, but this is a landscape of unique diversity of flora and fauna, from whales and seals to smaller marine life, such as jellyfish and coral.

Keen to observe and understand this biodiversity, wildlife photographer Dhritiman Mukherjee visited the town of Tasiilaq, on Greenland’s eastern coast, in 2018. He spent two weeks in the area, visiting fjords, diving in the waters of the Arctic Ocean, and photographing the inhabitants he encountered along the way. 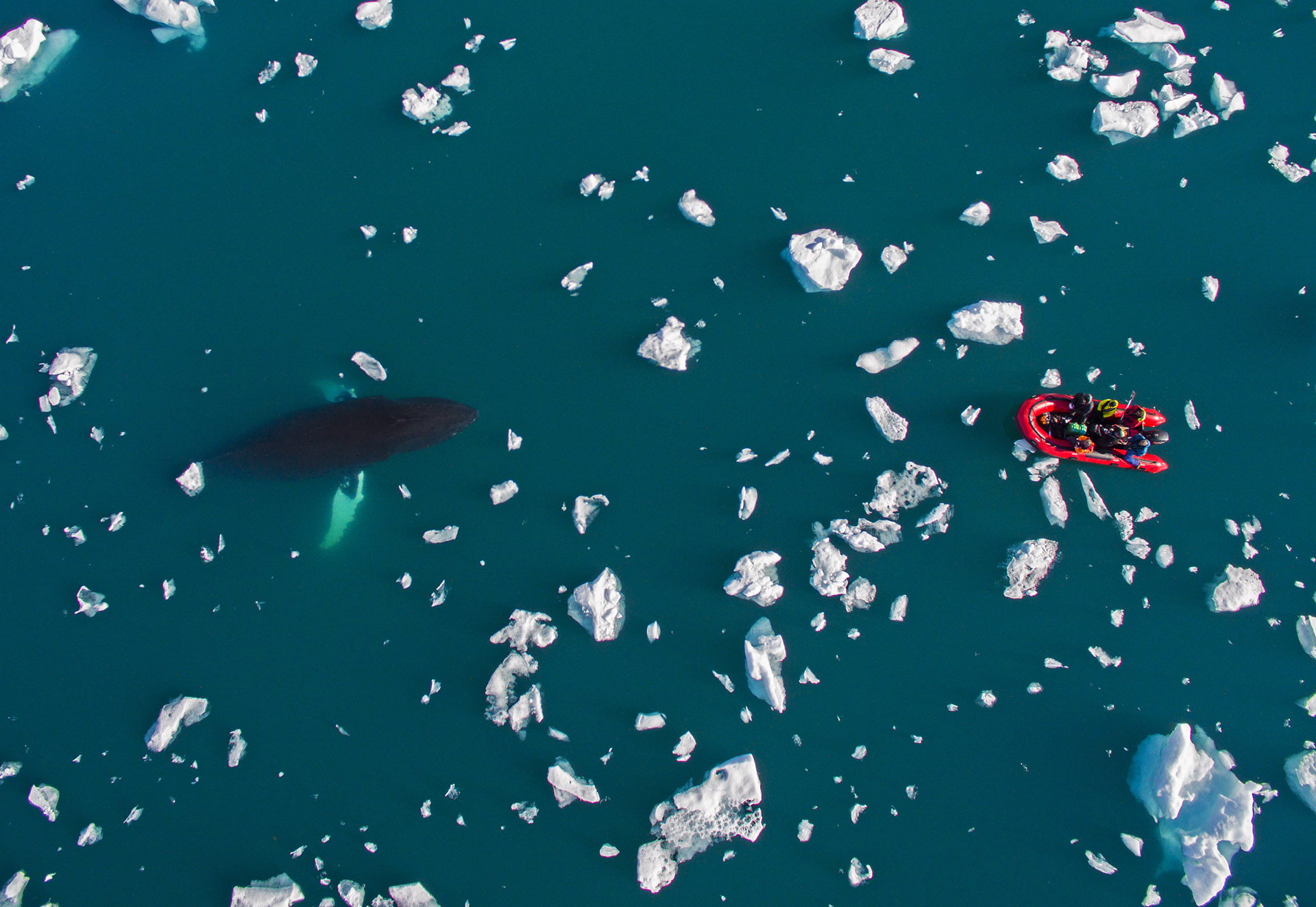 Humpback whales (Megaptera novaeangliae) inhabit the waters of Greenland in summer, between May and October. When winter arrives and krill — small crustaceans, and the primary food source for whales — is no longer available in the waters of the Arctic Ocean, they migrate to warmer waters. An adult humpback whale weighs an average of 40,000 kilos, reports National Geographic.

A lesser-known inhabitant of the region is the fin whale (Balaenoptera physalus), the second-largest mammal on Earth, after the blue whale. Fin whales populations suffered tremendously from commercial whaling in the 20th century, but their numbers are better now. Today, fin whales are hunted only by licensed members of the Inuit community, who have a long tradition of living alongside these marine giants.

In Greenland, the only thing larger than whales are icebergs. Until you get in the water, you do not understand just how big they are, says Dhritiman. Above the water, the icebergs are hard, sharp, and sculpted, but viewed from underwater they take on a softness and otherworldly quality.

There are generally few life forms around icebergs, as the temperature is very low and the ice doesn’t have much nutrition to offer. But there are jellyfish, says Dhritiman. Some, like this lion’s mane jellyfish, have tentacles that are over a hundred feet in length, making it longer than the blue whale. 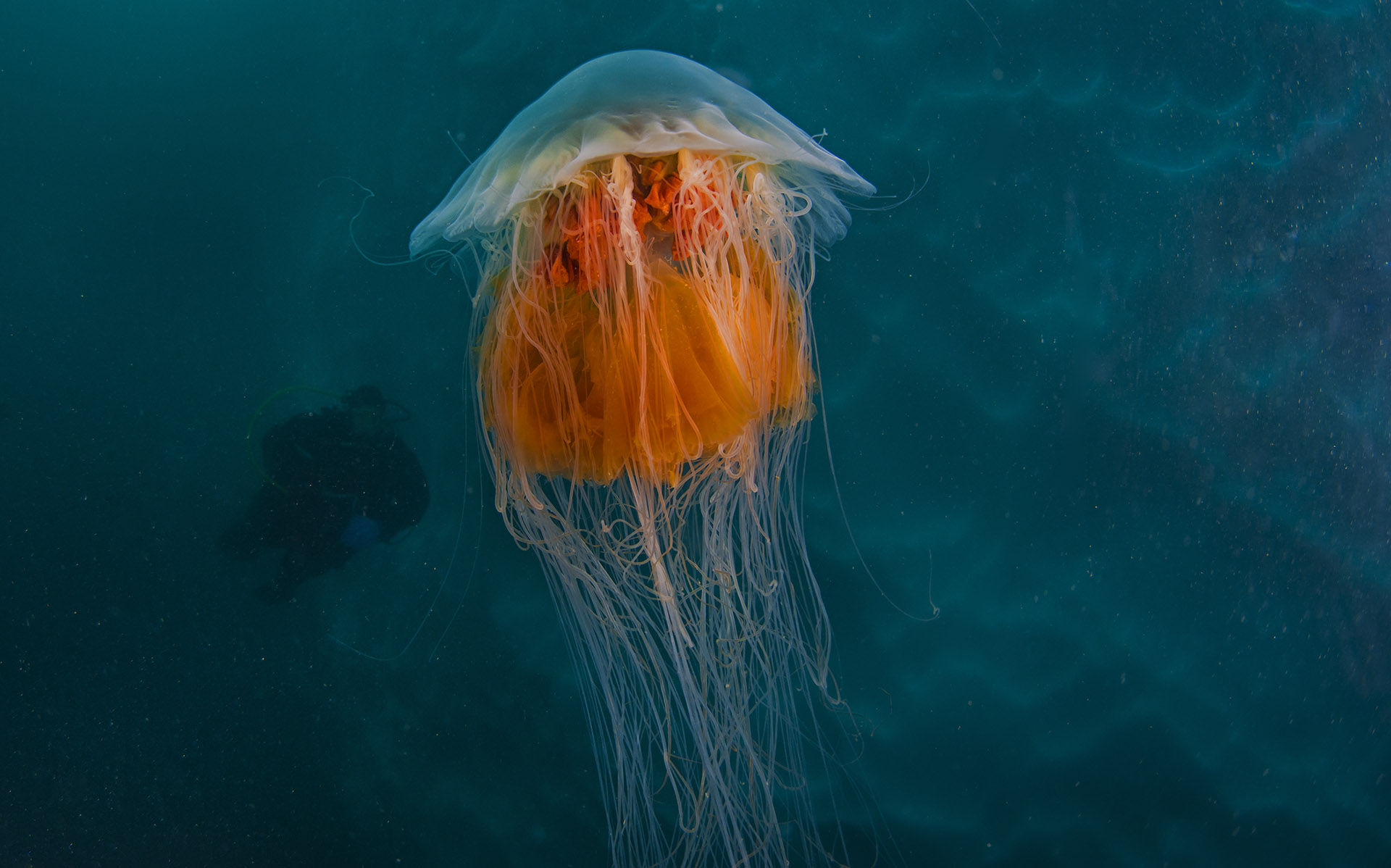 Lion’s mane (Cyanea capillata) is the largest species of jellyfish in the world. Its “mane” is made of hundreds of delicate tentacles, each equipped to deliver a sting that is painful to humans and fatal to the small marine life that they feed on. They eat small fish, shrimp, and other species of jellyfish. This specimen, Dhritiman estimates, was at least six feet long.

Farther down, in areas free of iceberg disturbance, corals and anemones add daubs of colour to the inky palette. Contrary to popular belief, the Arctic Ocean floor supports a healthy diversity of marine life, ranging from nudibranchs, sea snails, and sea slugs, to species of shrimp and fish.

The ghost shrimp, also called skeleton shrimp, is one of Greenland’s more reticent inhabitants. Each shrimp measures about 4 cm, and has a transparent, glass-like quality that inspired its name. It is often sighted snacking on kelp, its primary food source.

To dive into the frigid waters of the Arctic, divers need to wear heavy thermals, wetsuits, gloves, and headgear. Even with these additions, swimming in these waters is tricky due to the combination of sea ice and freshwater ice, which have different densities, and impact buoyancy in their vicinity. Plus, with the ice almost always moving, navigation is harder. 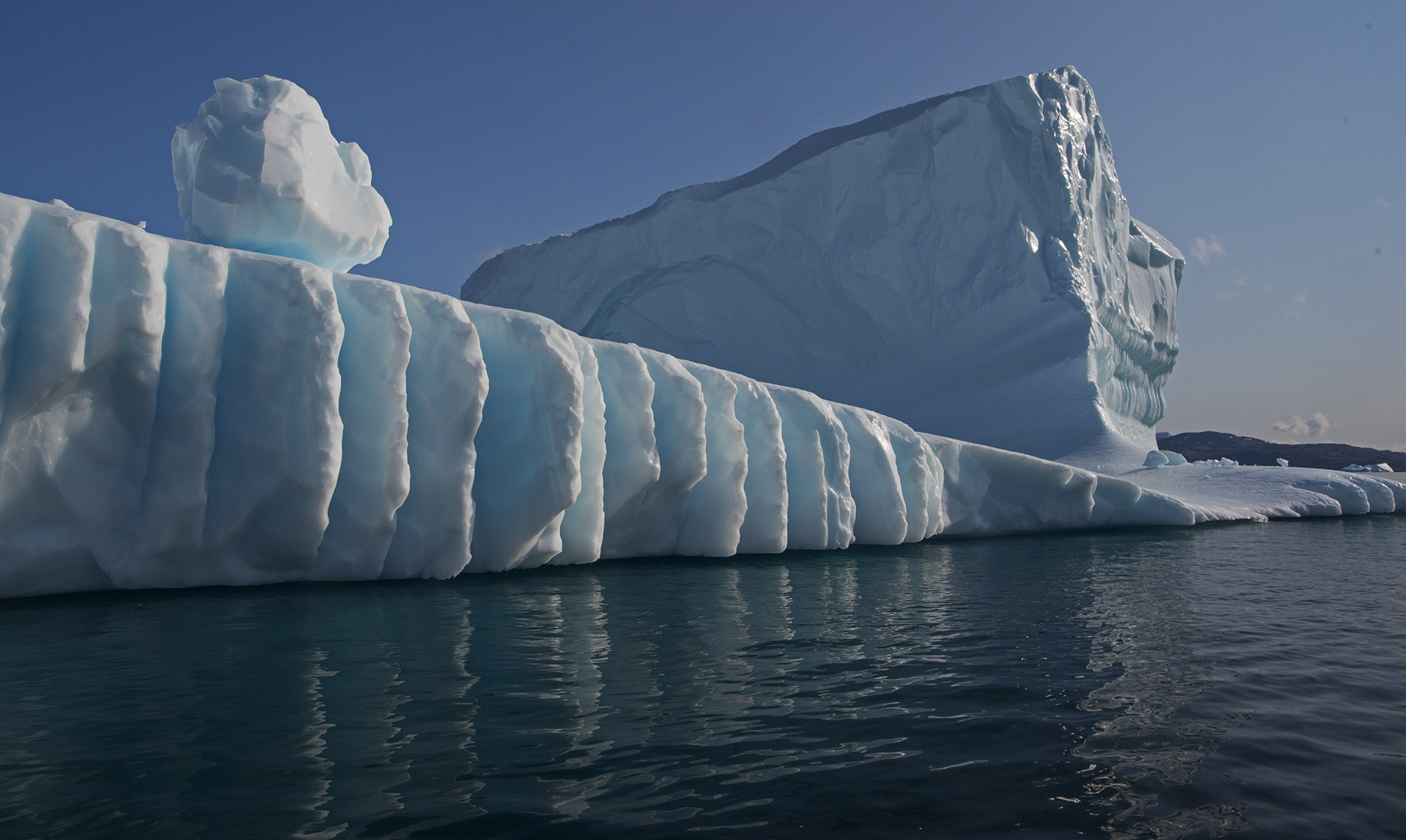 The ice takes on exquisite shapes, due to changing temperatures. Some blocks appear sculpted into precarious curves, while others are flat, endless, and several times larger than a cruise ship. According to Greenland tourism’s website, “Greenlanders once used icebergs to distinguish the seasons and even to identify towns, a testament to their steadfast presence, and to the intertwined character of Greenlandic culture with our country’s powerful nature.”

Seal hunting is legal in Greenland, and residents hunt seals for food and blubber, which is cooked into steaks, soups, and sausages. Sometimes, hunted seals are tied to the pier, and immersed in the icy water, so they remain preserved until they are required. The practise of hunting, Dhritiman says, is probably why the seals he encountered were so shy.

When they weren’t diving or exploring nearby fjords, Dhritiman and his partner divers stayed in these “camping units.” These fuss-free accommodations are accessible only by boat, and equipped with beds and basic kitchen equipment. “Our first task was to carry the supplies from the boat, up the rocky slope, to our rooms,” says Dhritiman. “It is isolated, yes, and that is the best thing about it.” 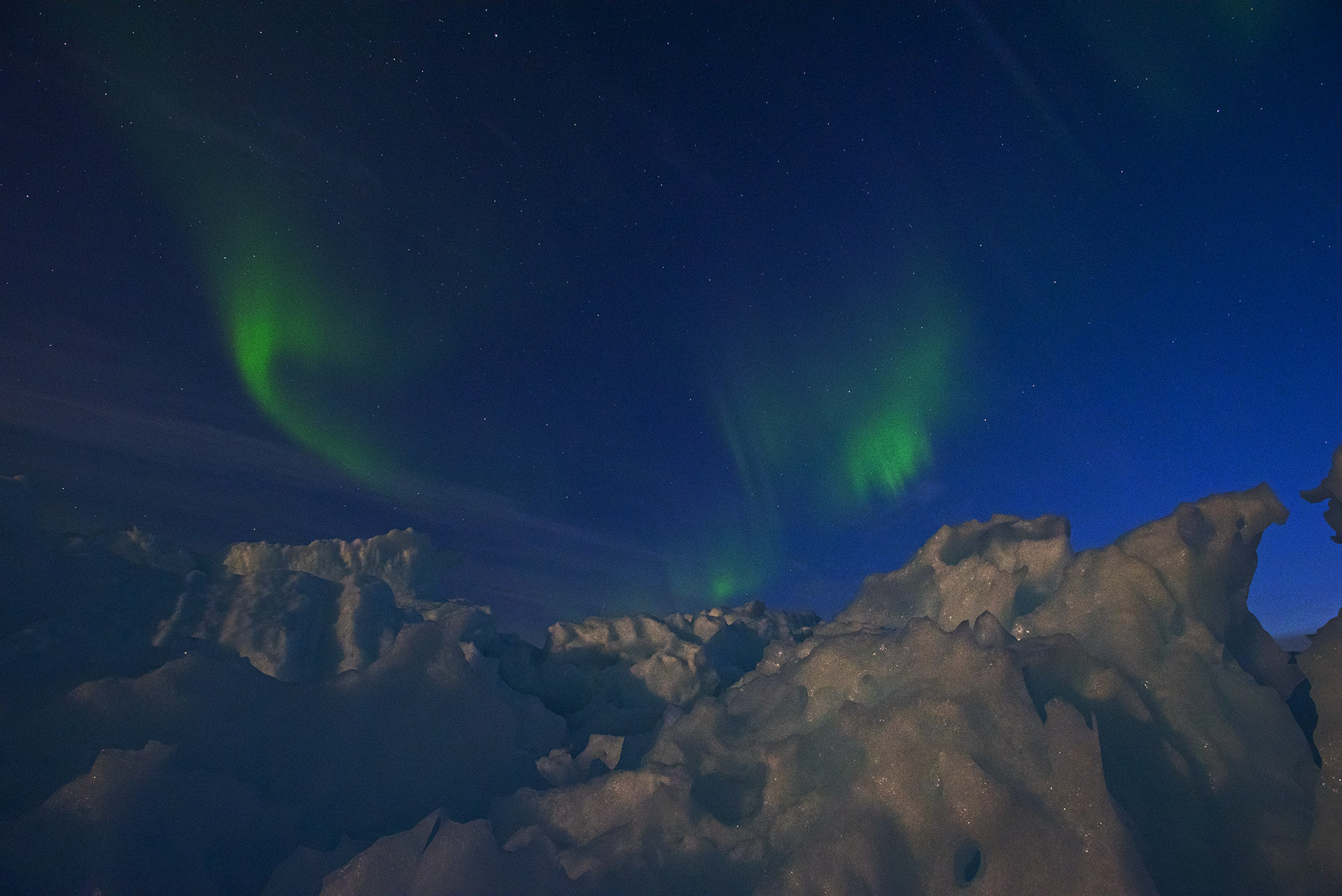 The night sky in Greenland, Dhritiman says, was particularly stunning. Aurora borealis or the northern lights, is technically on display all year, but the phenomenon is not visible during the summer months, when the sun does not set for several weeks. During autumn and winter nights however, the sky is a blanket of stars, often accompanied by ethereal, dancing, green lights.

It is not uncommon for the residents of Tasiilaq to walk past icebergs on their daily walk to work. The town is dotted with blue and red homes and gardens where vegetables are grown in the summer months.

Summer is a time of thawing in Greenland. The sun doesn’t set for several weeks in some places, and several months in others — a phenomenon called Midnight Sun — and as a result, the cold, hard ice begins to melt. With the earth exposed, plants sprout, transforming hillsides into fleeting wildflower meadows that last as long as the midnight sun. Greenery is plentiful at this time, though much of the vegetation is below knee height. 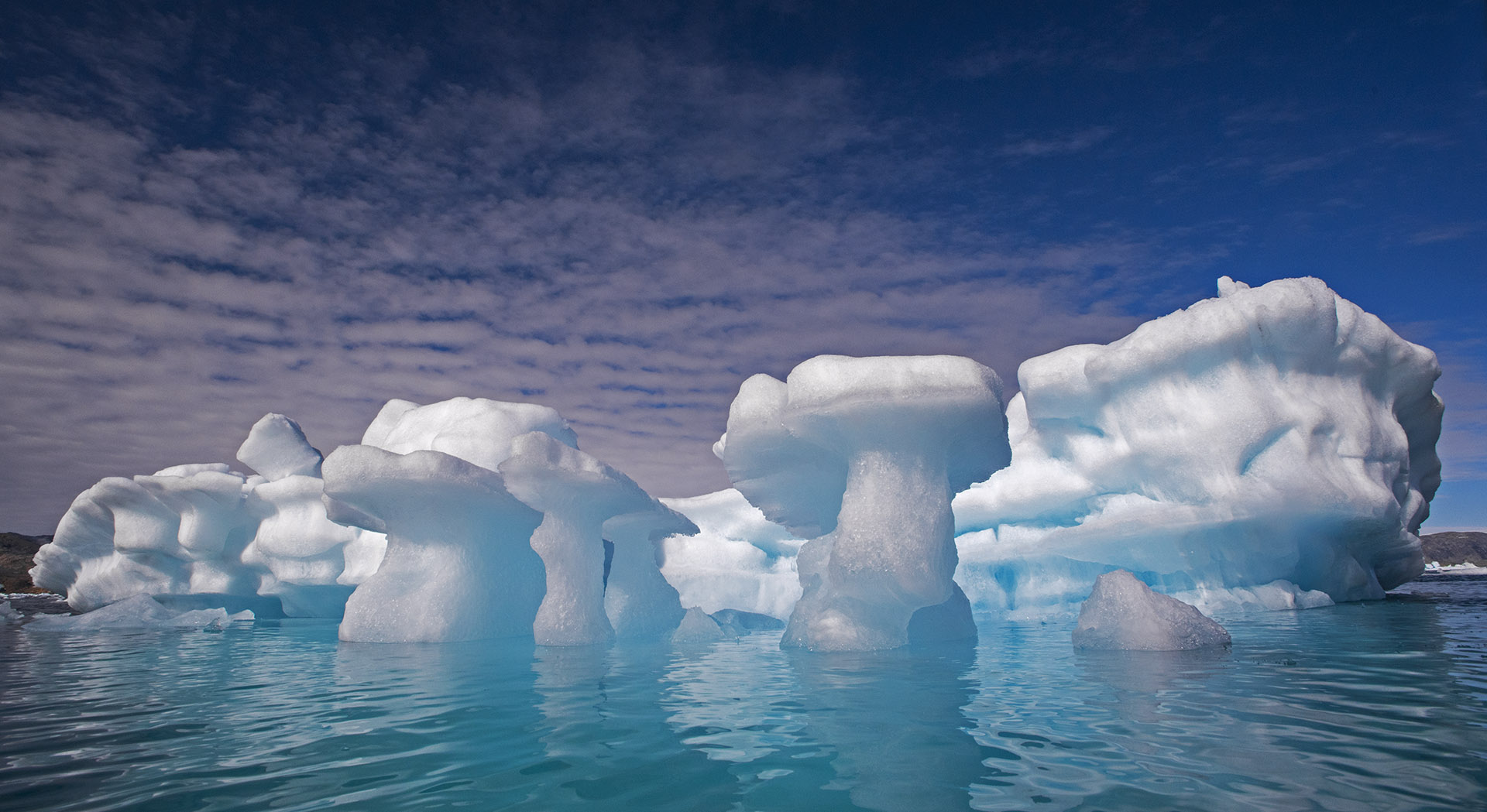 Greenland is shaped by ice, both geographically and culturally. The cold is part of life here, and influences everything from livelihood and architecture of homes, to the flora that grows here, and the local legends that have developed over time. Greenland is predominantly inhabited by the Greenlandic Inuit, a community of aboriginal people with immense wisdom, knowledge, and understanding of the region. “The early Inuits believed that nature was endowed with the spirits,” explains a website about Inuit culture. “Every single stone, piece of straw, animal and organism was alive and had a soul.” Perhaps this is why some members of the Inuit have become eco-warriors of late, raising awareness about climate change, and fighting commercial fishing, large-scale whaling, and mining for rare metals. If only the powers that be, would listen a little closer.