These shaggy bears inhabit the high mountains of the Himalayas and spend their days foraging, sleeping, and tending to young 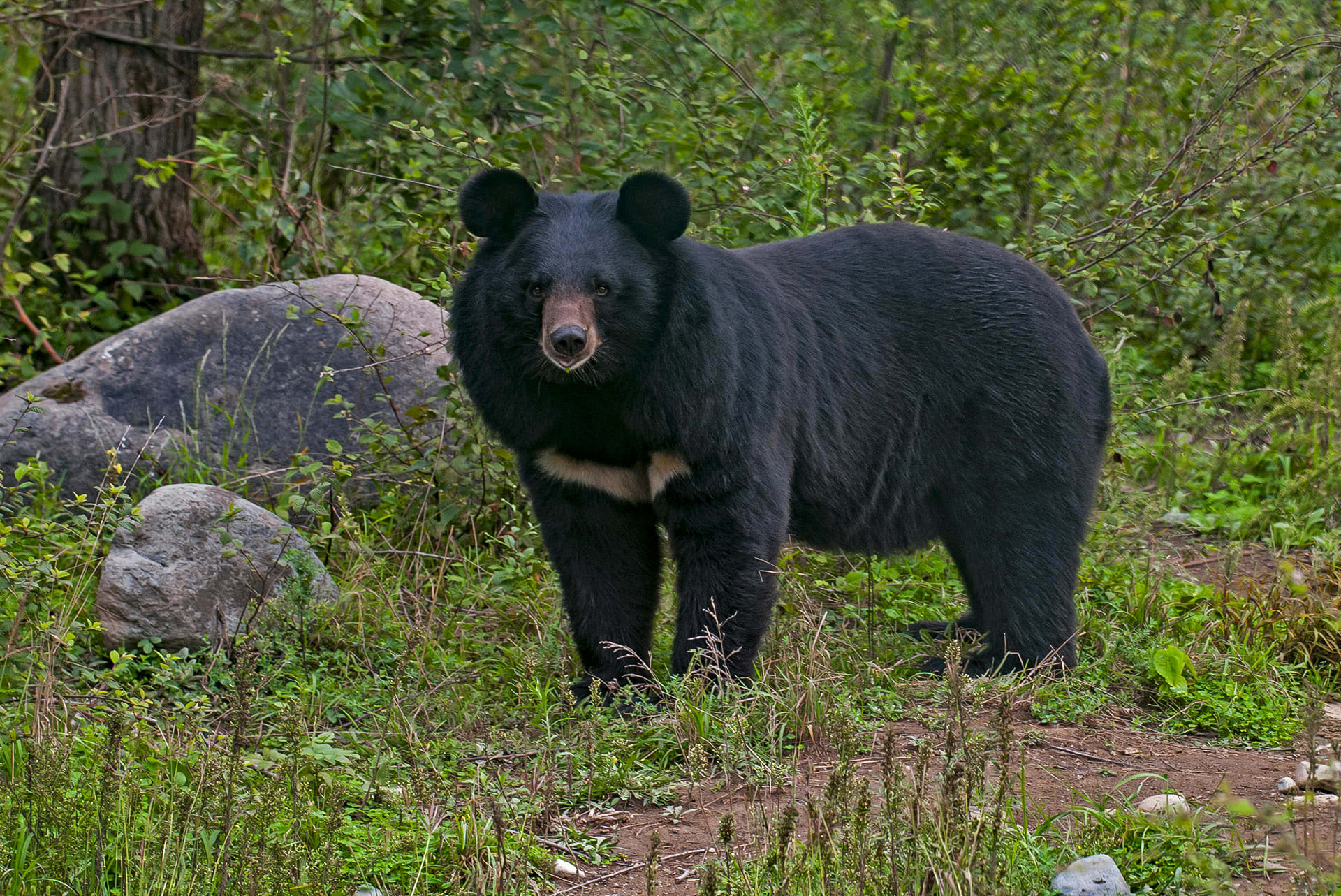 Most of us know at least one fictional bear, like Winnie the Pooh, or Baloo from Jungle Book who introduces young Mowgli to the simple joys of life. Yet, few of us know of the real, living ursine species in our country. India has four bear species: sloth bear, sun bear, Himalayan brown bear, and Asiatic black bear. This last species, also called the moon bear, Himalayan black bear, and Ursus thibetanus, is in focus here. Asiatic black bears prefer cool weather and are found in the mountainous regions in “southern Asia, Korea, north-eastern China, the Russian far east, and limited parts of Japan,” according to WWF India.

They spend their summer days climbing trees, sleeping, foraging for food, and grooming. As winter approaches, their lifestyle changes, depending on the altitude they inhabit. “In the high mountains, where it snows heavily and food is rare, Asiatic black bears go into hibernation in rocky dens, natural caves, and hollows of trees,” explains Dr Sambandam, a scientist with the Wildlife Institute of India who has written numerous papers on the ecology of the species. “But in parts of the northeast, such as Meghalaya, they do not hibernate at all, because winter temperatures are not that hostile, and food is available.” Some bear populations practice seasonal migrations, moving to lower altitudes in the winter, and spending the summer months in the higher reaches.

Those bears that do hibernate, are also changing their lifestyle. Recent studies indicate that Asiatic black bears are hibernating for shorter periods of time (as little as 50 days) due to erratic weather patterns caused by climate change. “Anecdotal information suggests that the bears used to hibernate for around 3-4 months, from mid-December and to mid-March,” says Dr Sambandam. “but they are now hibernating for shorter durations of time due to scanty rainfall.” This in turn, affects breeding patterns, interactions with human populations, even the vitality of the habitat. 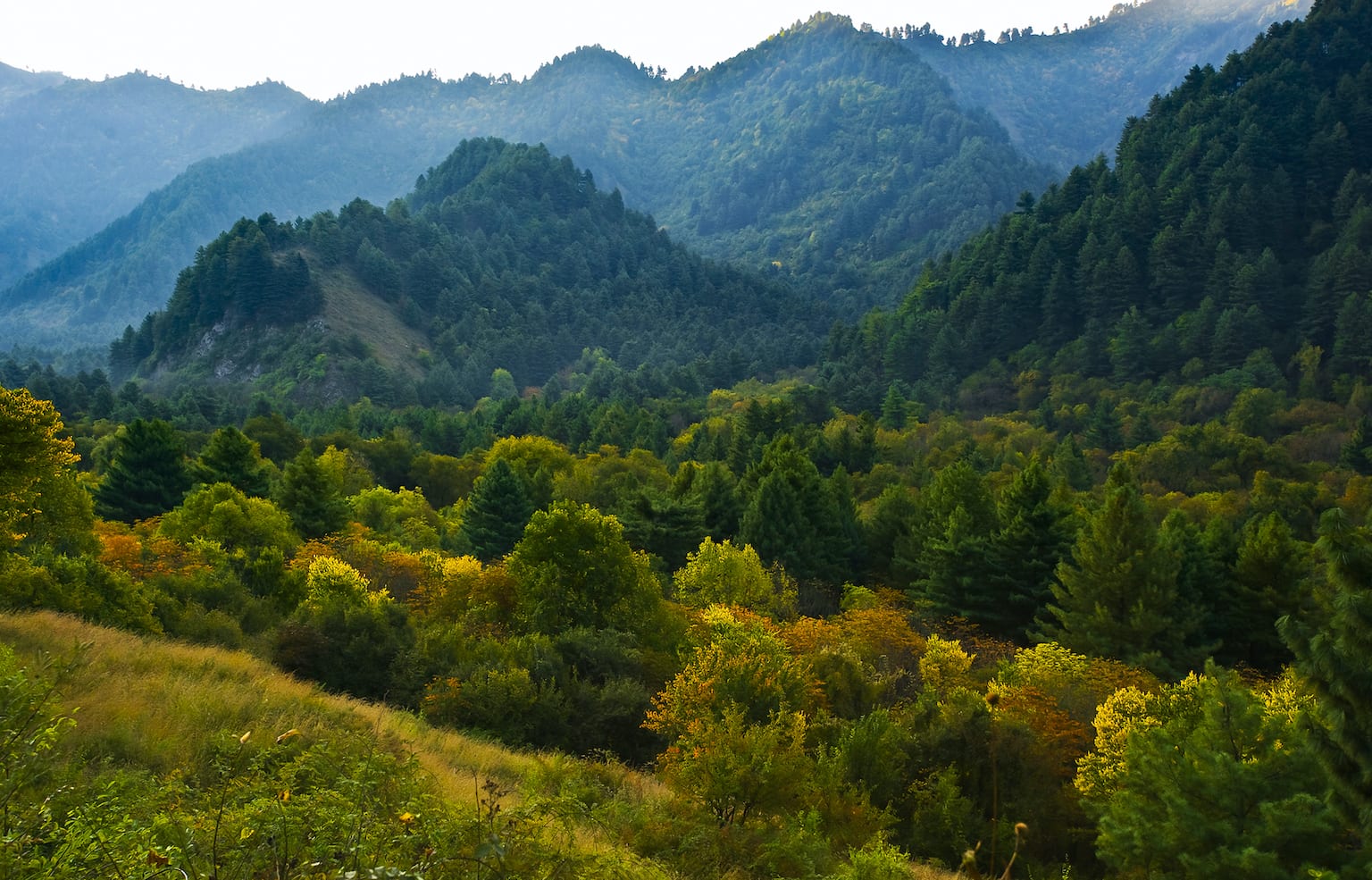 In India, Asiatic black bears live in forested and mountainous habitats between 1,200 m and 3,300 m, in Jammu and Kashmir (above), Himachal Pradesh, Uttaranchal, Arunachal Pradesh, Sikkim, West Bengal, Mizoram, Meghalaya, and Tripura, according to Dr Sambandam. He estimates their population is between 5,400 to 6,750.

Asiatic black bears are opportunistic feeders and consume fruits, berries, roots, nuts, honey, and small invertebrates, depending on the time of year. “Ursus thibetanus is placed under carnivore but except [the] polar bear, most bears are opportunistic omnivores,” write authors Vijay Kumar Yadav, DS Chauhan, and PC Lakhera in a research paper on the bears in Nanda Devi Biosphere, Uttarakhand. They mainly feed “on fleshy plant material rich in energy, insects, fish, and mammals etc.” they say.

One of the ways researchers establish the diet of a species is by analysing scat samples in a specific area over a period of time. By identifying the seeds and organic matter in the poop, the bear’s sources of diet and nutrition can be verified. The scat pictured here, studded with seeds, informs us of a crucial function that the bear plays in its ecosystem: that of seed dispersal. It accomplishes this task by eating widely, and then making nutrient-rich deposits (aka poop) across the forest floor, ensuring a steady supply of seeds to germinate in the forest. 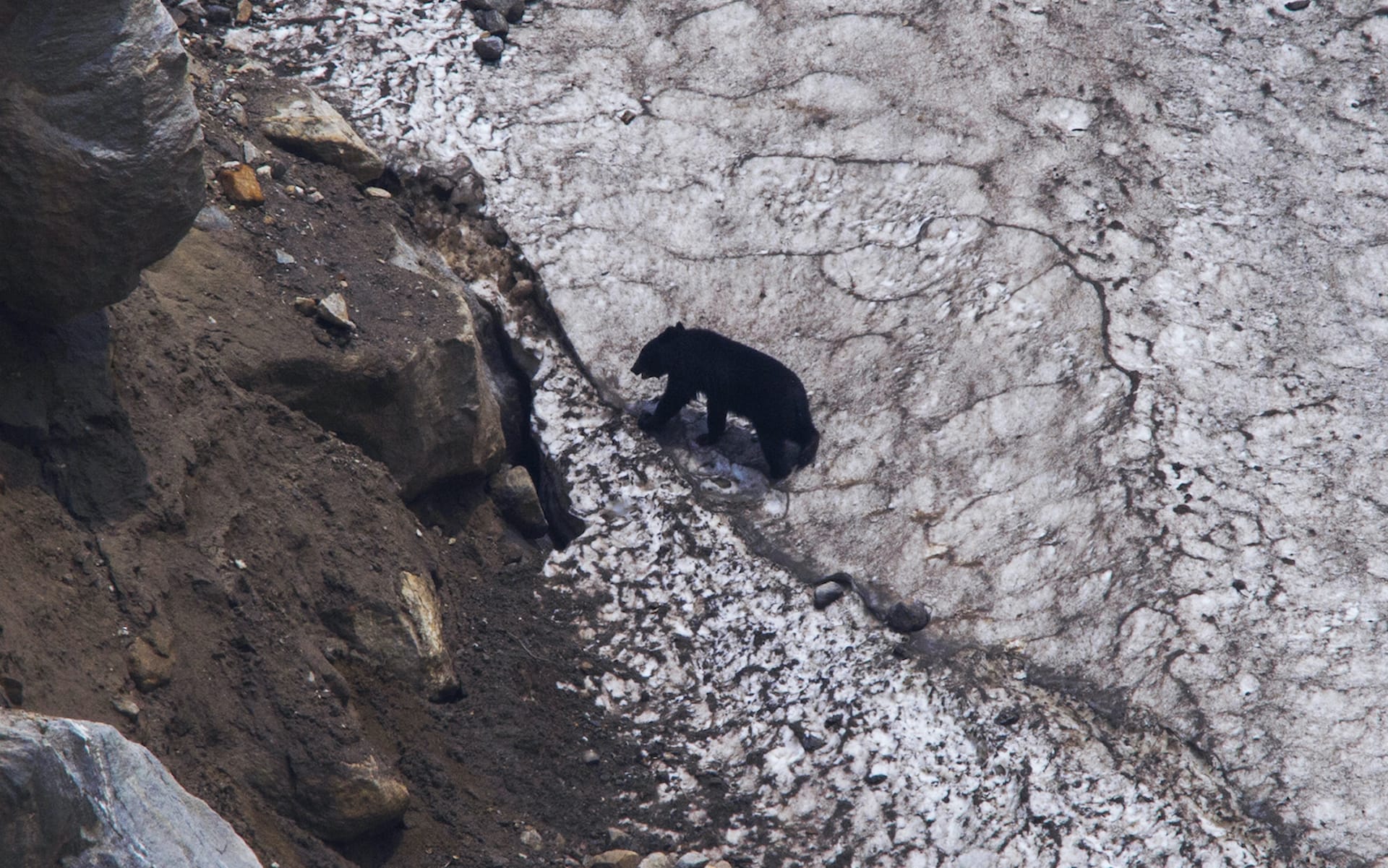 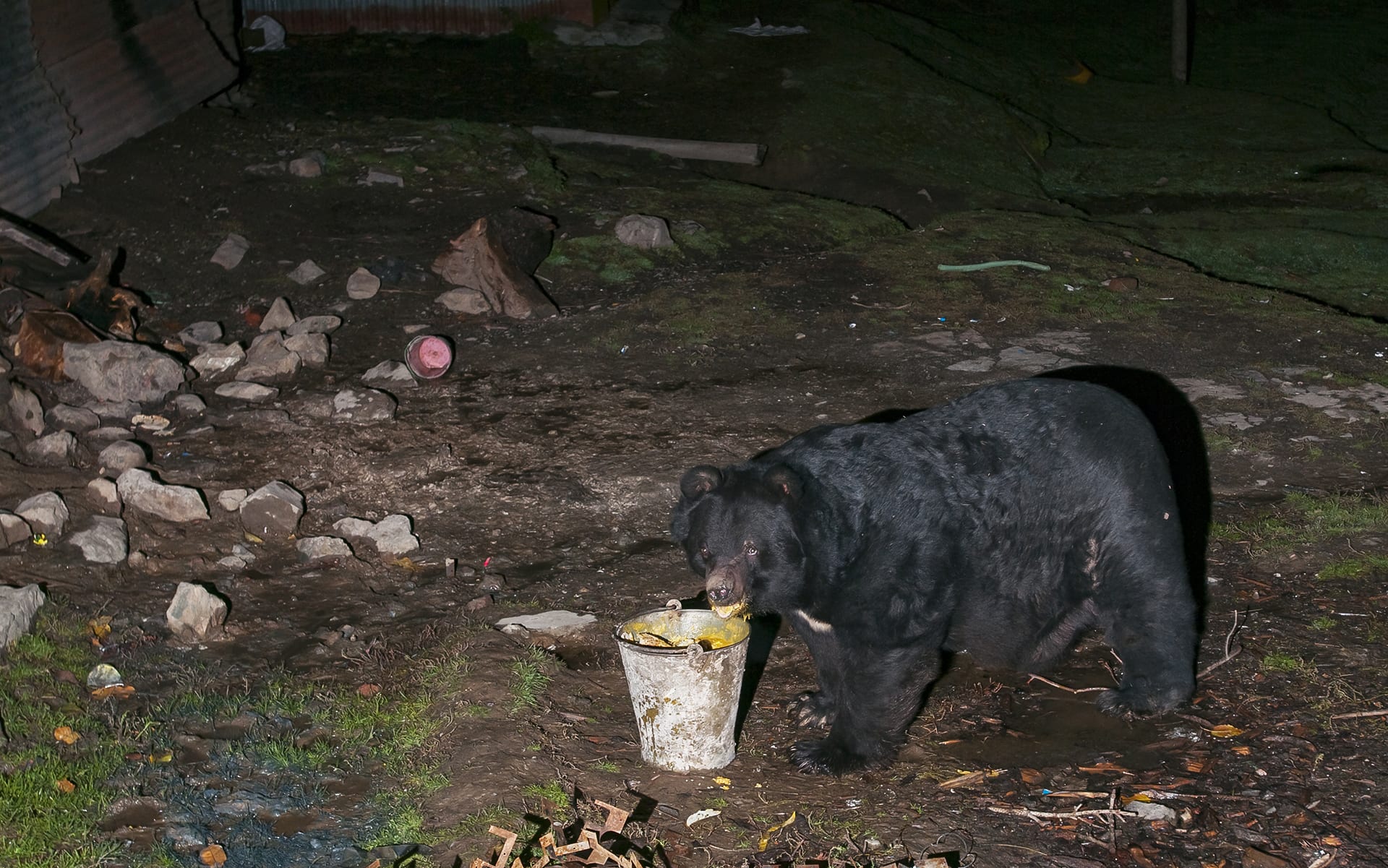 However, in cases of shortened hibernation, bears emerge hungry but the landscape does not have as much food to offer, as it is too cold for many plant species. In these situations, bears turn to human populations for sustenance, deriving nutrition from open garbage dumps, livestock herders, fisheries, and apiculture farms, having a ripple effect on the nature of human-animal relationships.

Black bears have an interesting reproductive cycle, which involves a process called delayed implantation. Mating occurs towards the end of summer, but the fertilised eggs are not transferred to the uterus until nearly winter. In the interim, females mate with numerous males in the vicinity, to ensure the survival of her young. “If the mother and cubs encounter a male that she has not mated with the previous season, he will simply kill the cubs,” says Dr Sambandam, “which is why many carnivore females mate with multiple partners during the breeding season.” This means that a single bear litter can have cubs from different males. 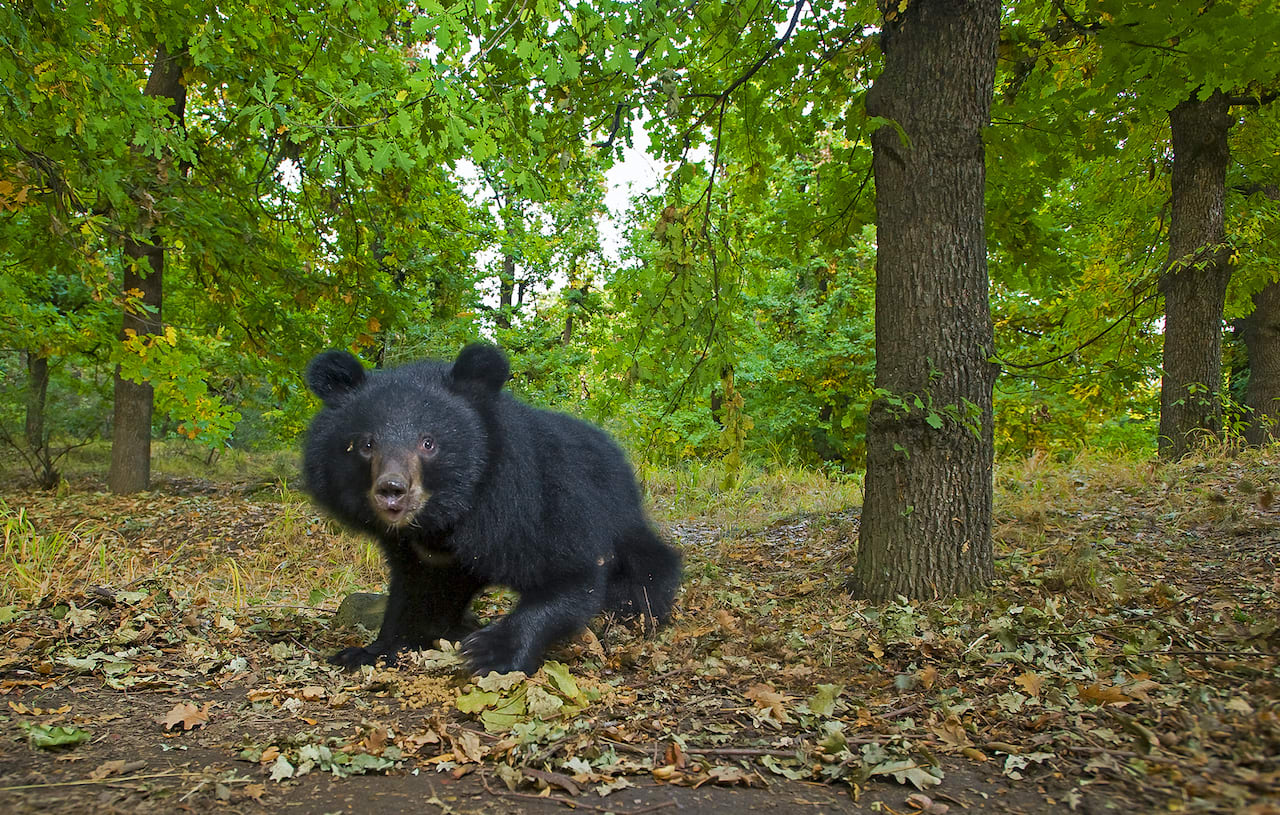 The cubs are born in the spring when food is plentiful. In the case of high-altitude bears that hibernate, birth occurs in hibernation dens before they emerge from them. “The young are quite helpless at this time,” Dr Sambandam says. “Blind, without fur, and entirely dependent on their mothers.” With time and nourishment, the cubs grow out of their dens, but remain in the company of their mothers for anywhere between 16-24 months.

When the cubs are socialised into the ursine way of life and it is time for the mother to mate again, the family unit is broken up through the process of dispersion. Eventually, males will travel outside their mother’s home range to establish their own territories and rank. Females, on the other hand, occupy a part of the mother’s home range.

Unfortunately for the Asiatic bears, their habitat is shrinking. In a study by Sitaram Phuyal, the Nepali author cites two primary threats to their ecosystem: natural events such as landslides, forest fires, erosion, and climate change; and manmade factors, including deforestation and woodland degradation, over grazing, shifting cultivation, and the over-consumption of plants favoured by the Himalayan black bear. 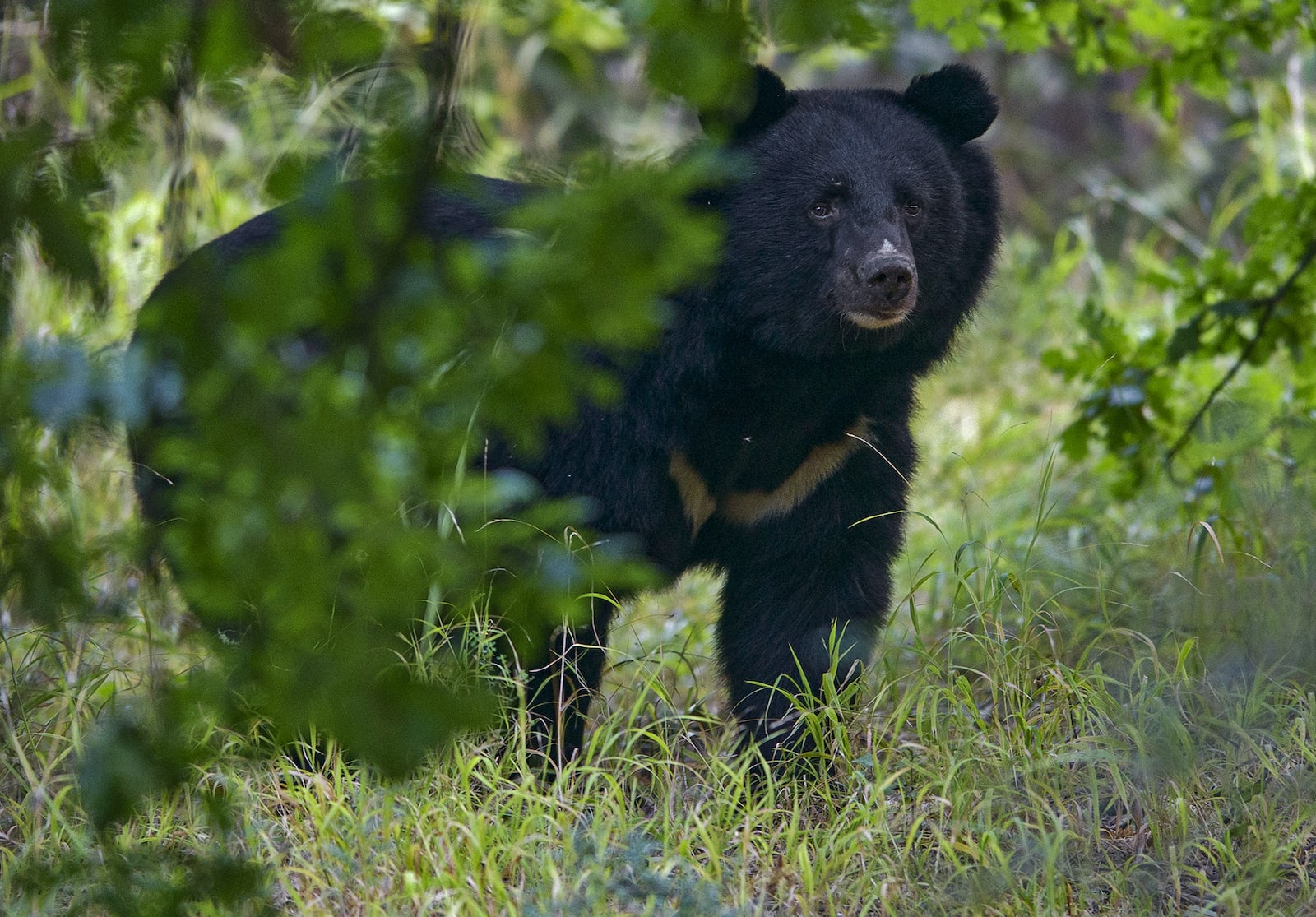 For now, this enigmatic bear continues to roam the Himalayas, snacking on its favourite foods and tending to its home forests like a good gardener. But how long will these beautiful creatures have the “bear” necessities they need?