Stunners of the Feathered Kind in Singalila National Park 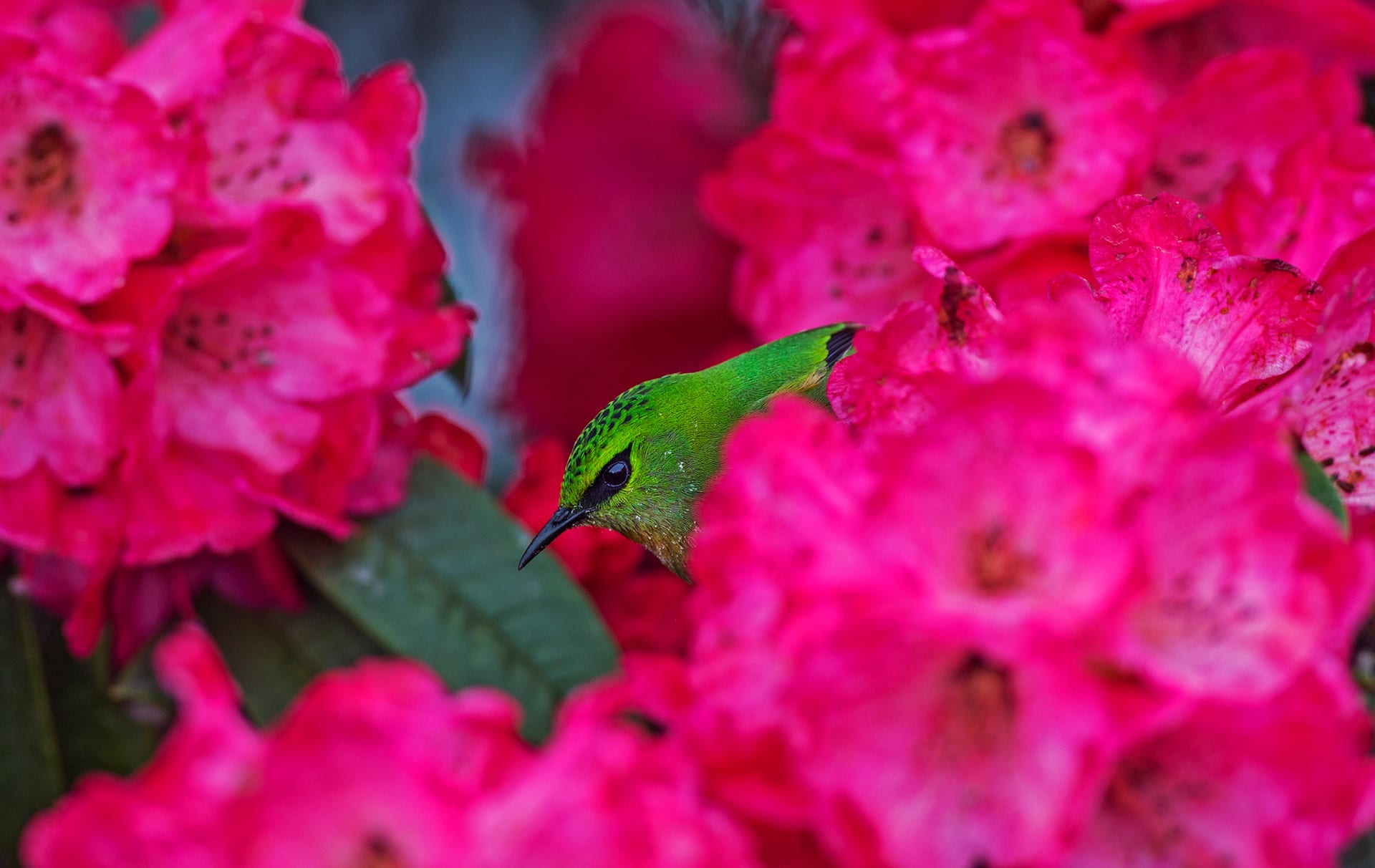 A blue whistling thrush (Myophonus caeruleus) welcomed me with a long piercing note near Manebhanjan, the gateway to West Bengal’s Singalila National Park. Little did I know that an assortment of thrushes and other birds would give me company over my five-day stay at this high-altitude park in the Darjeeling district.

Alpine thrushes (Zoothera mollissima) hopped ahead of me on the cobbled road to Sandakphu, the highest peak in West Bengal, flying away only when I was too close for comfort. Himalayan vultures (Gyps himalayensis) whizzed overhead like fighter planes in formation. Spotted, black-faced and chestnut-crowned laughingthrushes often revealed themselves in the dense forest undergrowth.  Satyr tragopans (Tragopan satyra) announced their presence in the steep valleys by their nasal wailing “wah waah oo-ah oo-aaaaa” calls.

Yellow-billed blue magpies (Urocissa flavirostris) made their ubiquitous presence felt throughout my stay at the park. Often, one would join its comrade to fly away together, their long blue tails hanging like streamers behind them. Their corvid cousins, large-billed crows (Corvus macrorhynchos) and common ravens (Corvus corax) were more adventurous in flight. They’d soar on the mountain winds, then suddenly dive-bomb towards the ground, and pull out of the risky manoeuvre at the very last moment with an air of nonchalance.

Singalila holds many delightful surprises of the feathered kind. More than 350 species of birds have been recorded at this 78-sq-km national park. The flowering of rhododendrons during March-April attract many birds such as the fire-tailed myzornis (Myzornis pyrrhoura, above). During the winter, many birds migrate to lower altitudes to escape the cold and search for food.

Wildlife photographer Dhritiman Mukherjee, who has made more than 20 trips to Singalila, says, “I visited the park for the first time in 1994. In fact, my tryst with the great outdoors began in Singalila”. He shares a collection of his photographs from the park he’s made over the years. 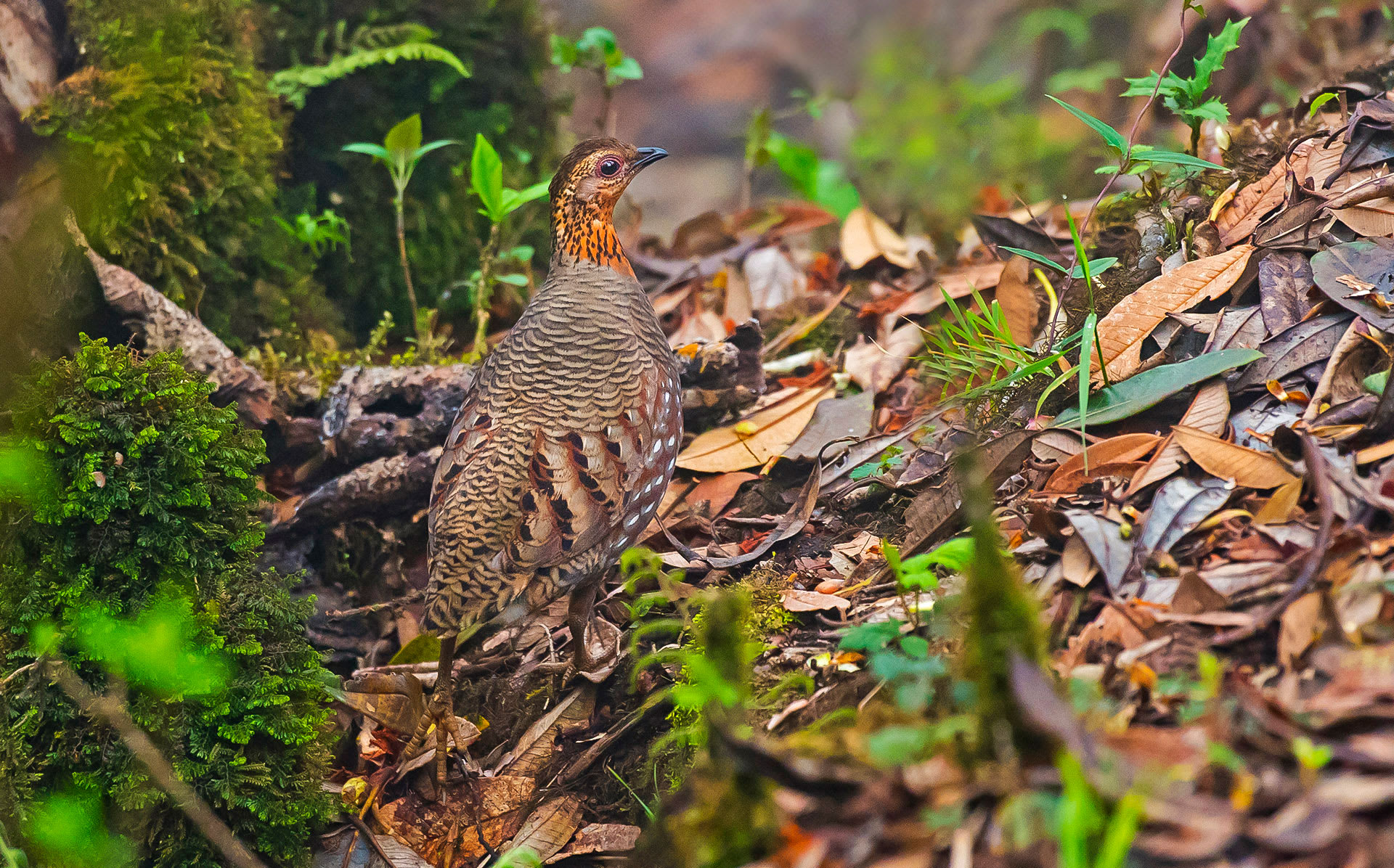 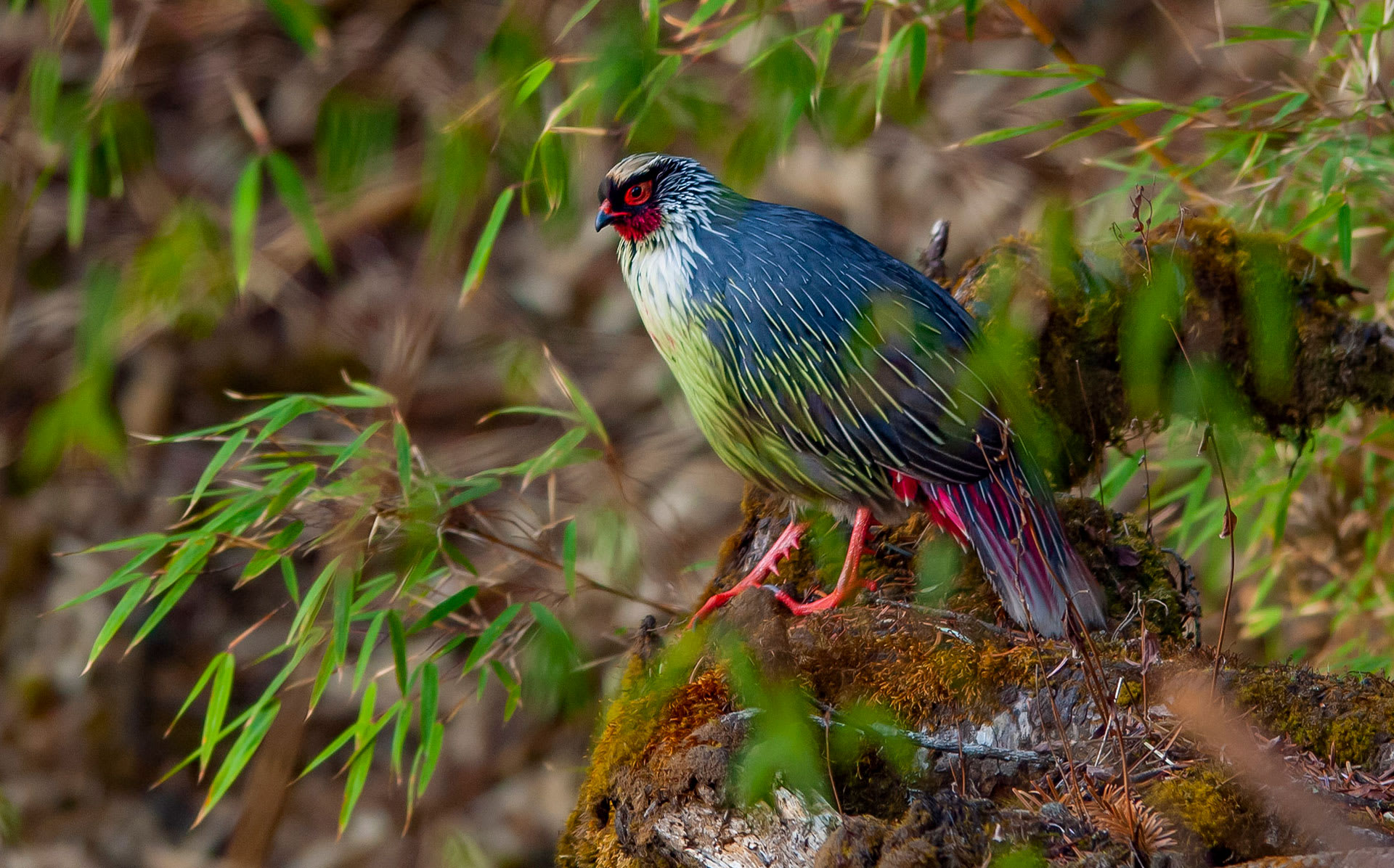 The satyr tragopan (Tragopan satyra) (top), blood pheasant (Ithaginis cruentus) (above right) and hill partridge (Arborophila torqueola) (above left) belong to the Phasianidae family, which comprises heavy-bodied terrestrial birds. They mainly eat seeds, fruit, buds, roots, and leaves, supplemented by invertebrates. These pheasants usually forage by scratching the ground with their feet to expose food hidden among dead leaves or in the soil. “In 2008, I spent around 40 days at the park to photograph the satyr tragopan and blood pheasant. While that trip yielded this photograph (above right) of a blood pheasant taken from a bird hide, it took another trip in 2013 to get a photograph (top) of the satyr tragopan. The two male tragopans were so engrossed in their fight that they didn’t even notice me approaching,” says Mukherjee.

The spotted laughingthrush (Ianthocincla ocellata) can be distinguished from other laughingthrushes by the black-based white spots on its chestnut upperparts. These inquisitive birds usually move through the undergrowth in high altitude forests in pairs and small flocks. On investigating the source of human-like whistles coming from dense bamboo groves in Singalila, I was greeted on more than one occasion by the curious gaze of these handsome birds. 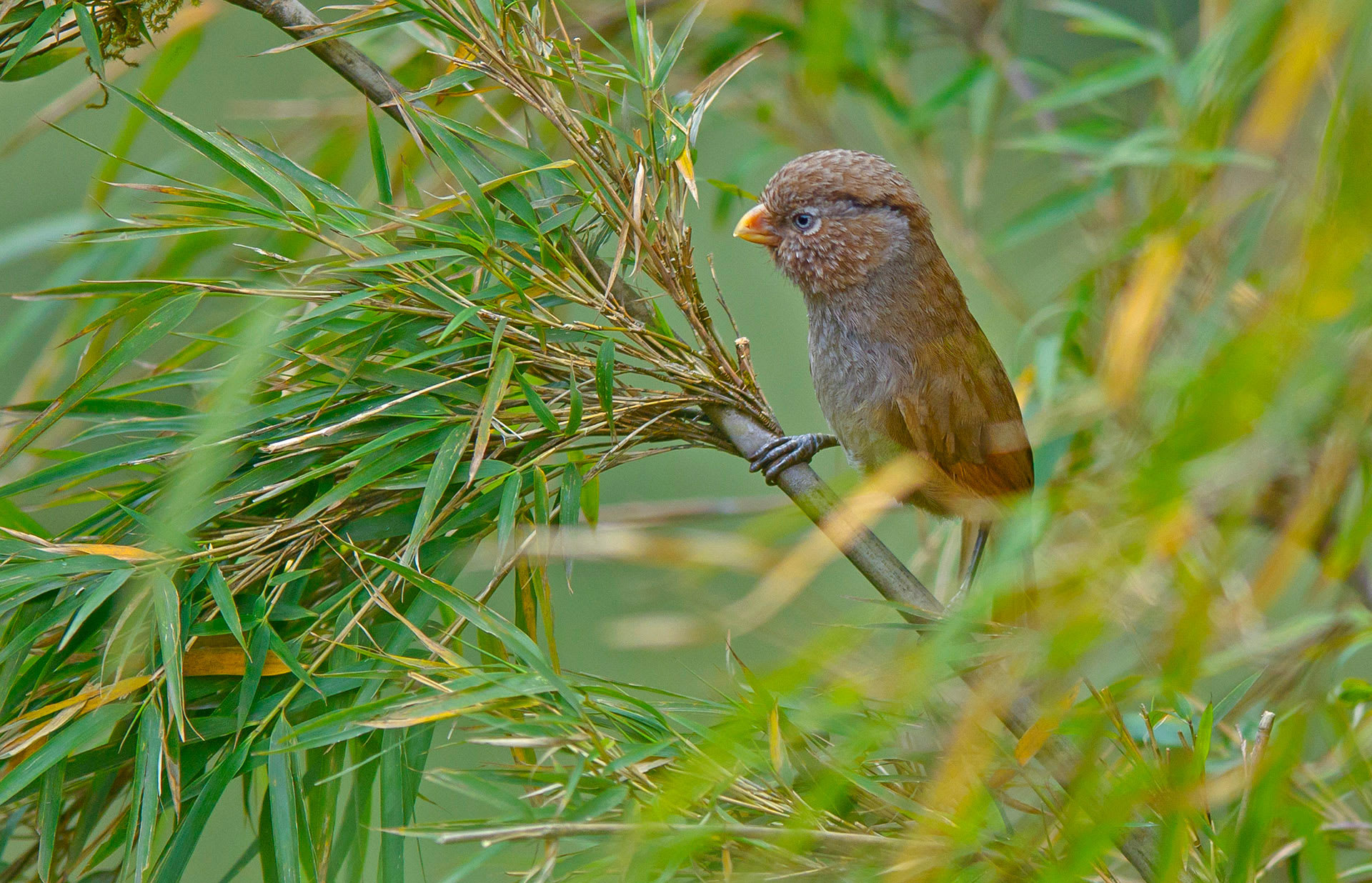 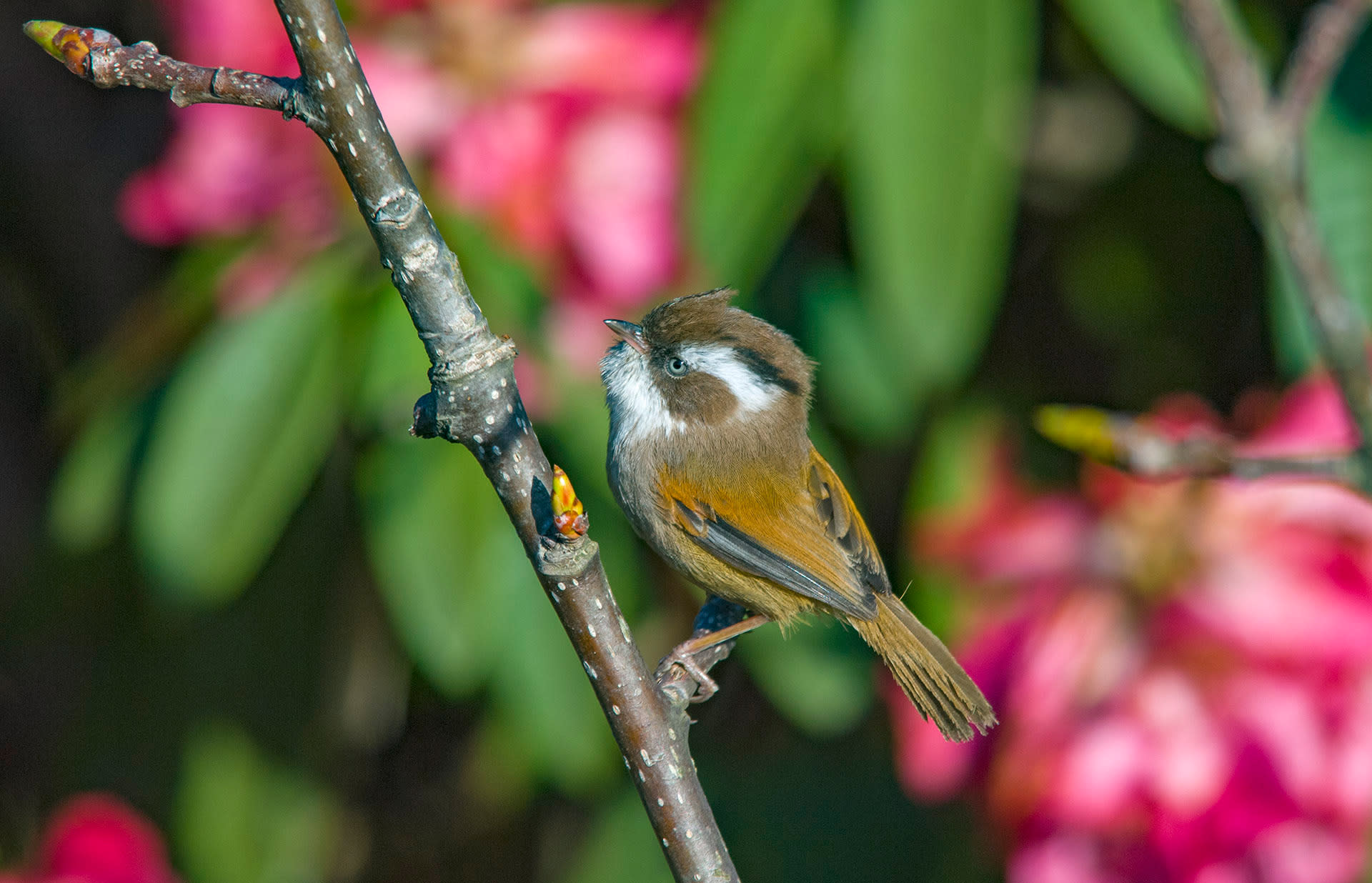 The brown parrotbill (Cholornis unicolor) (left) and white-browed fulvetta (Fulvetta vinipectus) (right) belong to the Sylviidae family of birds. The parrotbill has an arching black eyebrow and a stout yellow bill, while the fulvetta has a white eyebrow, which stands in sharp contrast to its dark crown. The parrotbill has a strong affinity for bamboo thickets, in which it moves about noisily in small flocks. The fulvetta usually forages restlessly amidst bushes, shrubs, and bamboo.

The fire-tailed sunbird (Aethopyga ignicauda) has a bill and tongue adapted to feed on nectar. It’s long, thin bill allows it to probe the petals of flowers while its long, tubular tongue is used to draw out nectar. Looking at the long, red swirling tail of a male flitting speedily from one tree to another at Sandakphu, I couldn’t help but wonder if this high-altitude resident’s back end was literally on fire! 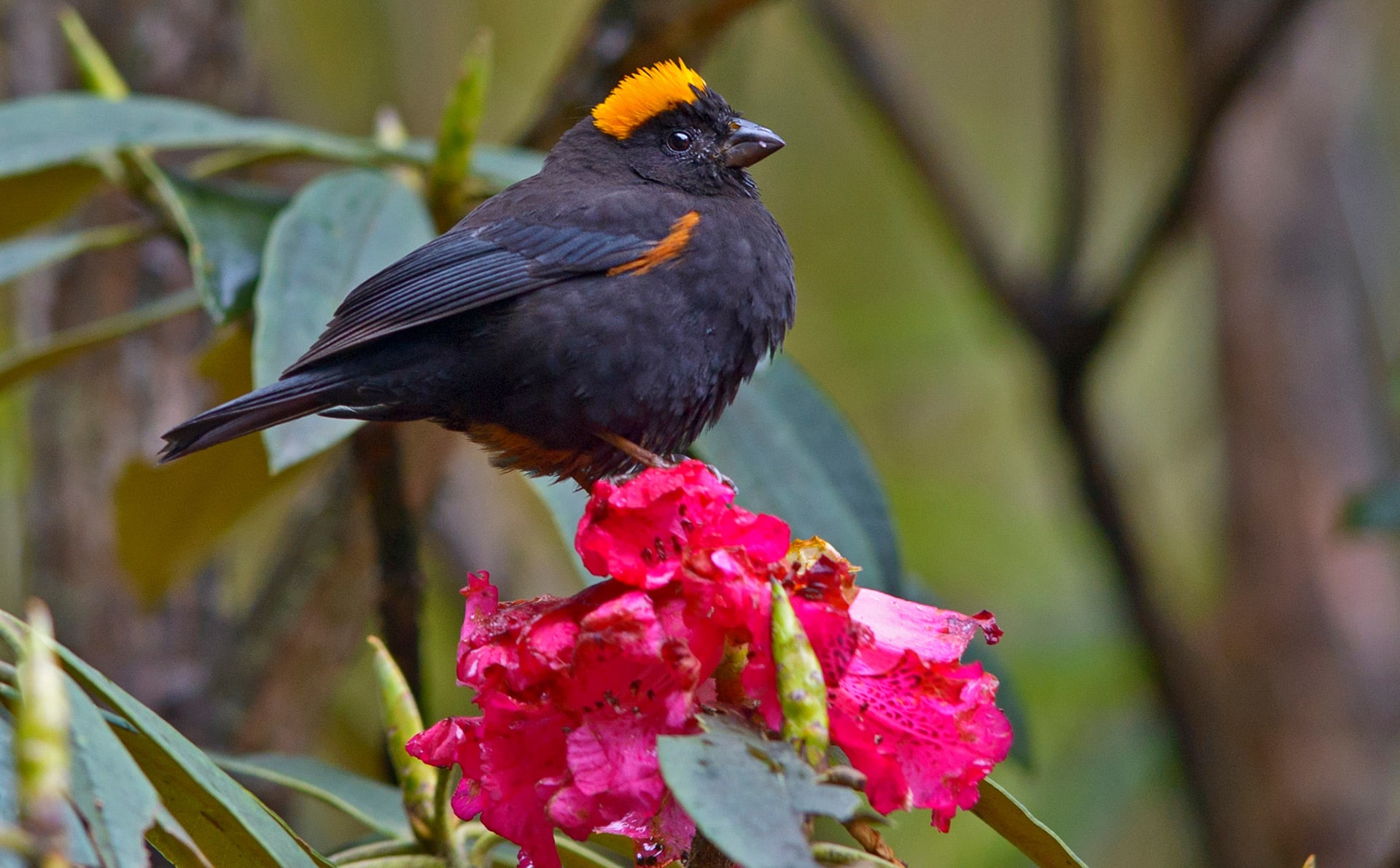 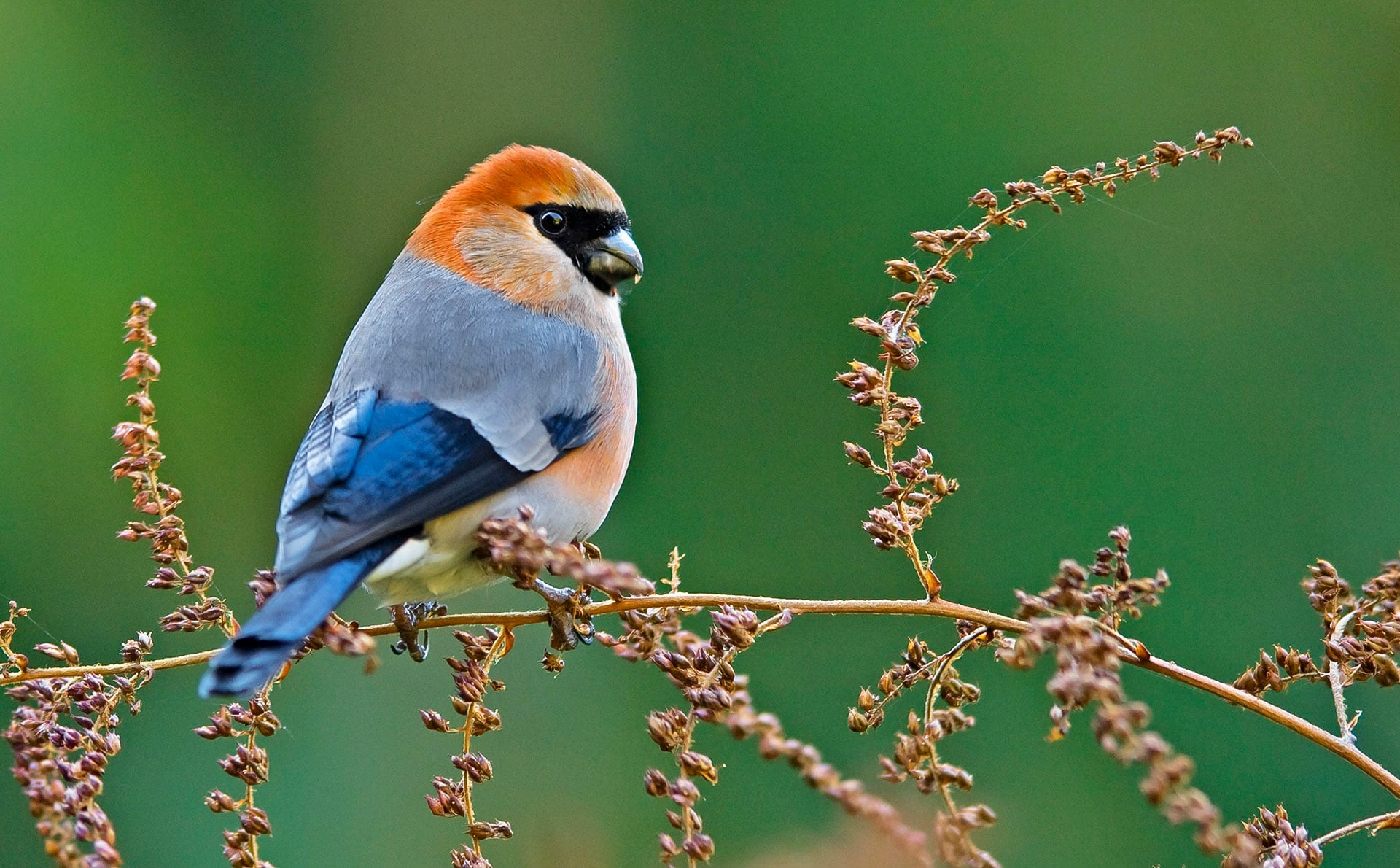 The red crossbill (Loxia curvirostra) (top), red-headed bullfinch (Pyrrhula erythrocephala) (above right) and golden-naped finch (Pyrrhoplectes epauletta) (above left) belong to the Fringillidae family of birds with a strong conical bill adapted to eating seeds and nuts. These small- to medium-sized birds often forage on the ground. At times they also feed on the seed heads of tall herbs and the blossoms and berries of bushes and trees. I witnessed the gregarious nature of these birds when a flock of red crossbills descended upon a patch of pine trees at Sandakphu. After satiating themselves on pine seeds, they moved to a nearby mountain path to deftly pick and consume sand with their twisted bills, a practice that aids in digesting the seeds.

Yuhinas belong to the family Zosteropidae, characterised by a conspicuous white ring around their eyes. Over five days in the park, I slowly grew accustomed to the constant chittering of yuhinas on my walks. Their high-pitched twittering was loudest near the oaks and rhododendrons along the mountain paths. The rufous-vented yuhina (Yuhina occipitalis) seen here prefers to forage more in treetops. 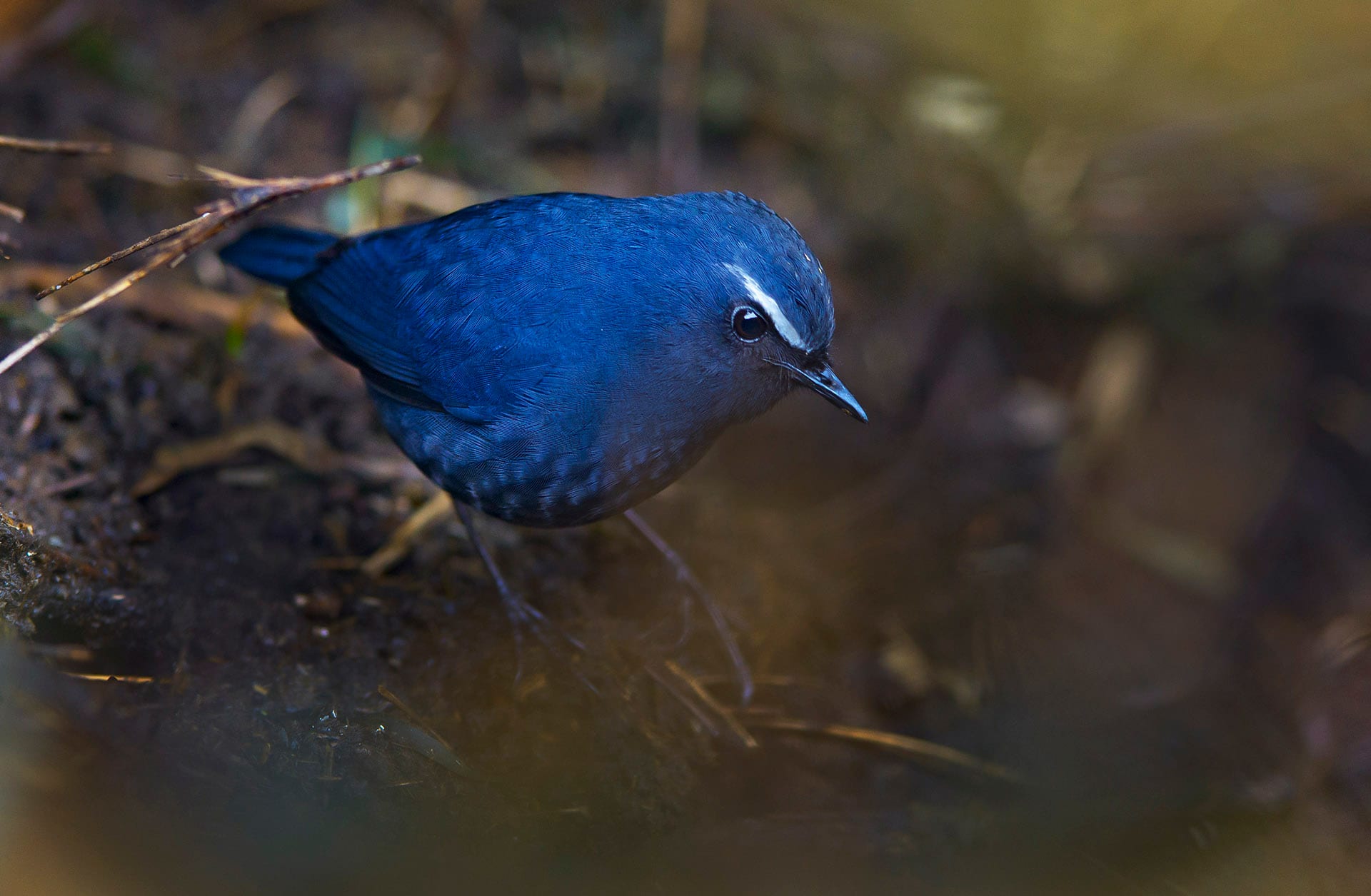 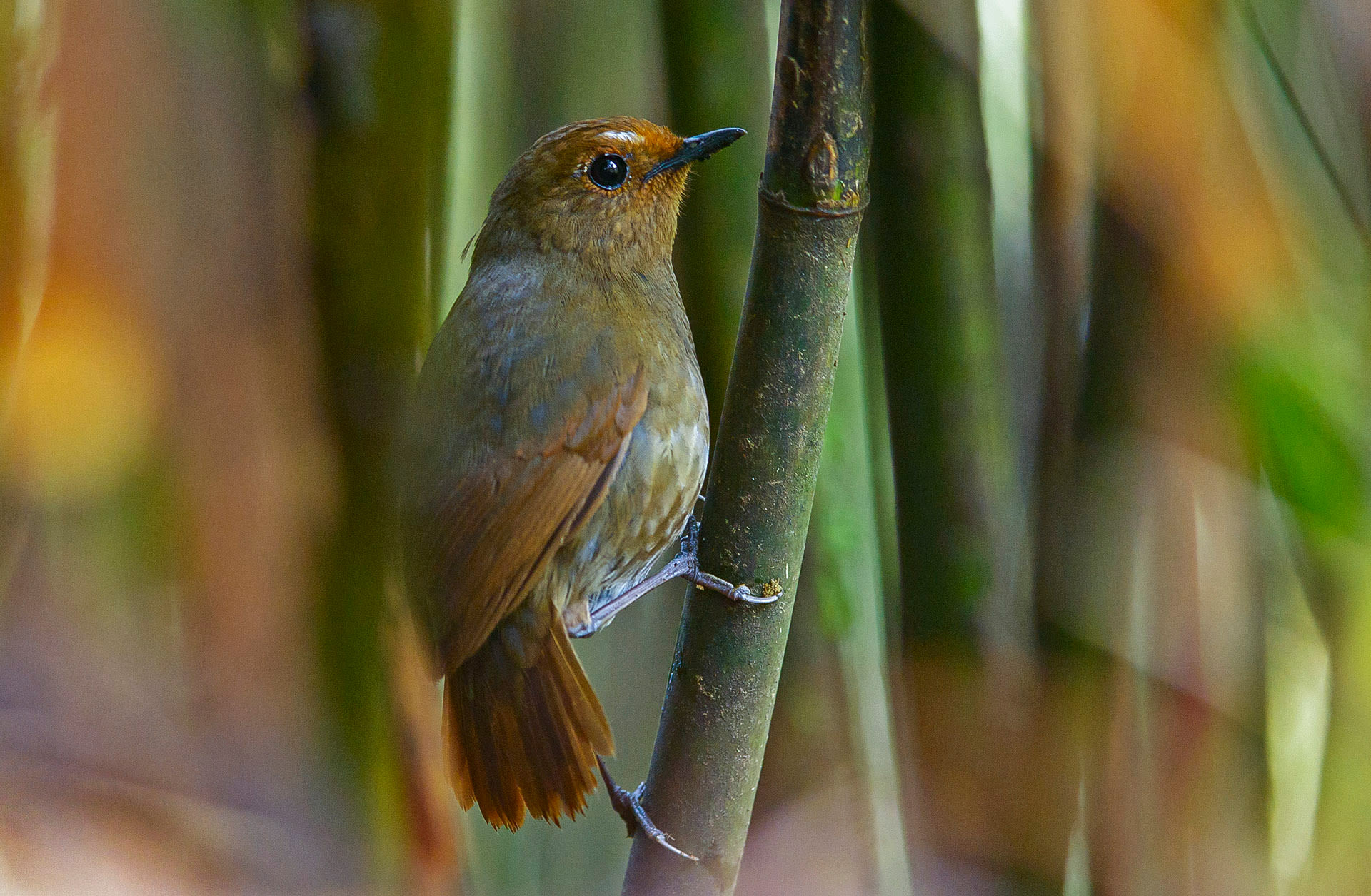 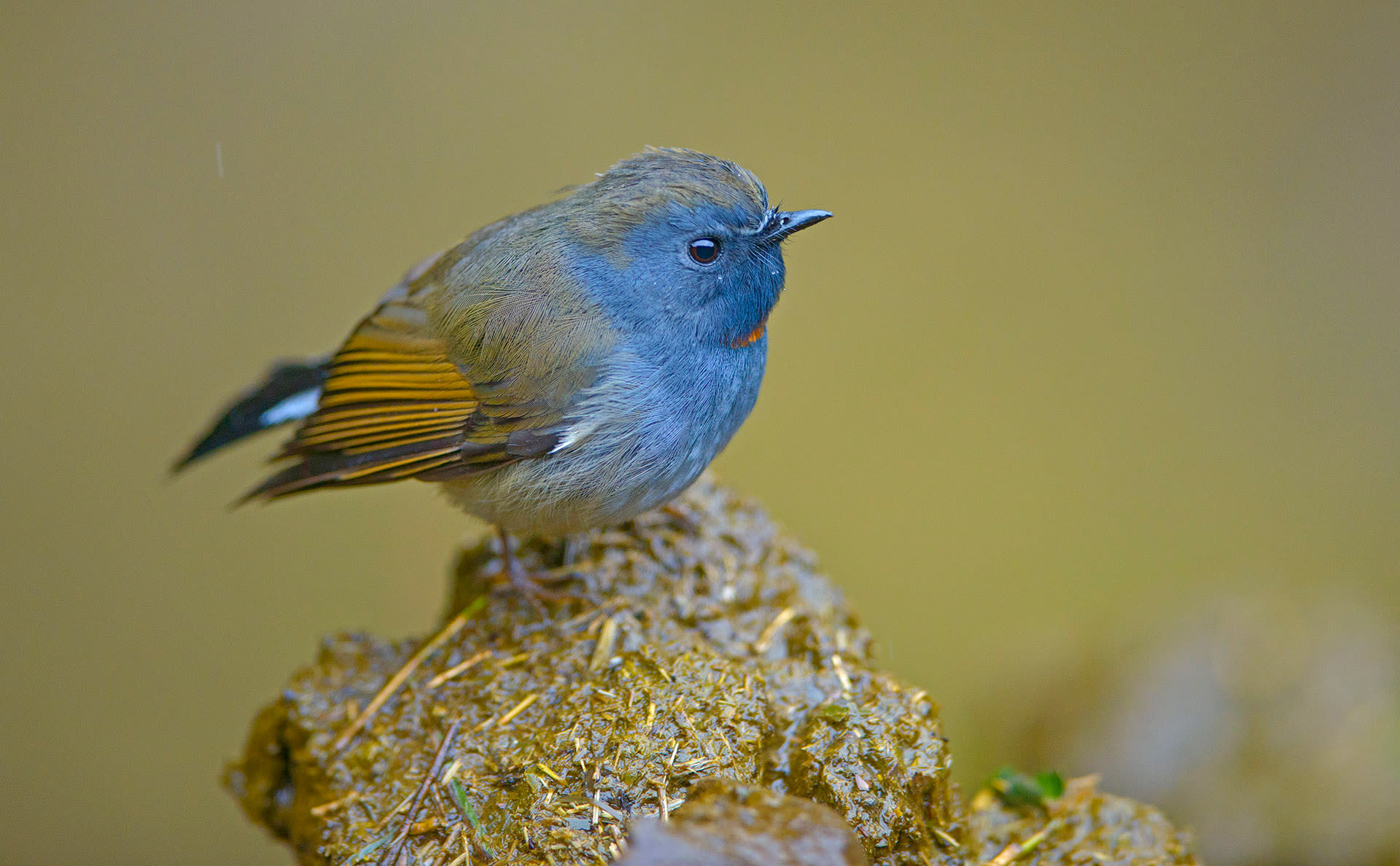 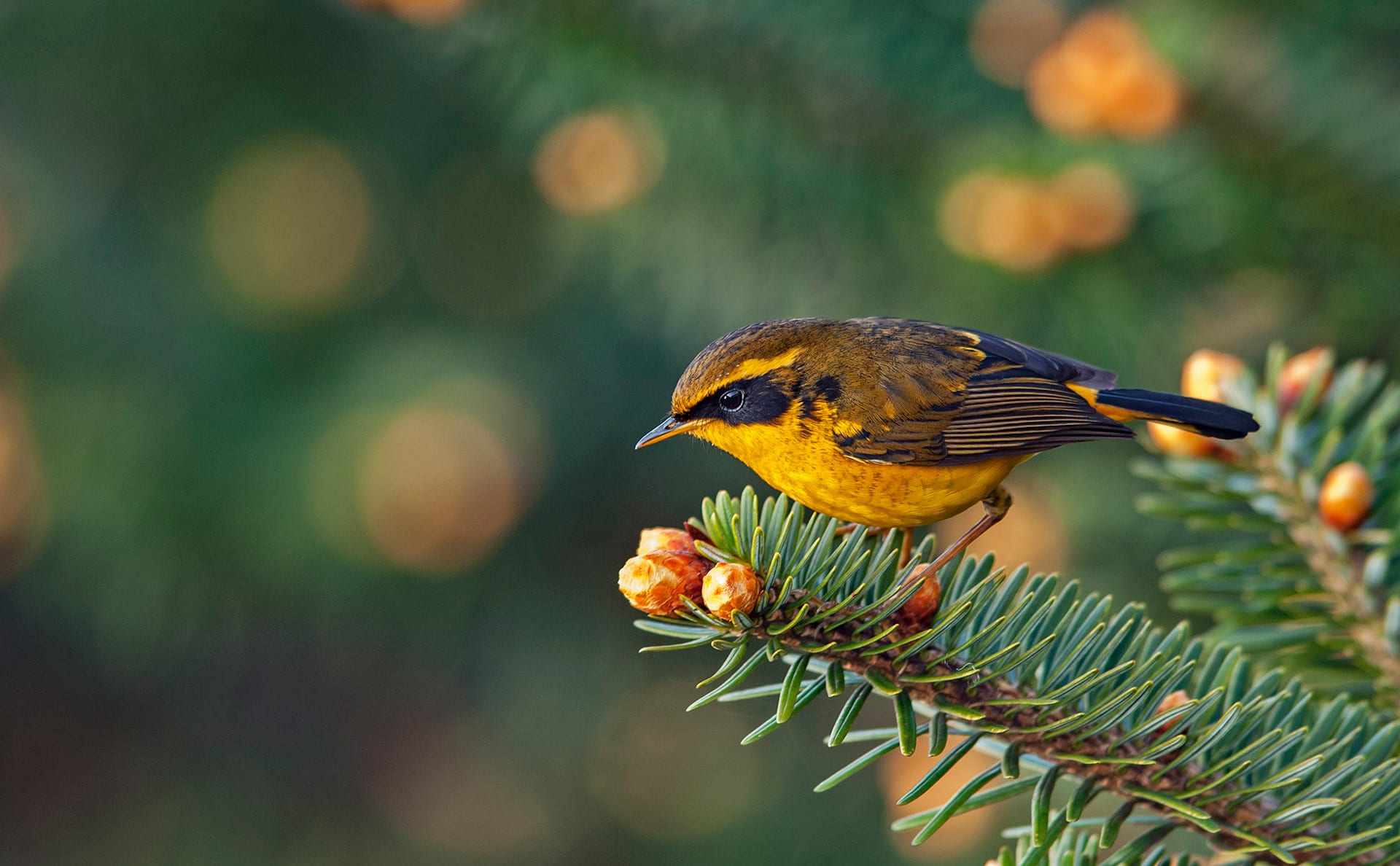 The Himalayan shortwing (Brachypteryx cruralis) (male on the top left; female on top, right), golden bush-robin (Tarsiger chrysaeus) (above right) and rufous-gorgeted flycatcher (Ficedula strophiata) (above left) belong to the Muscicapidae family of Old World flycatchers. These insectivorous birds have a small, flattened bill and bristles at the gape (fleshy area at the base of the bill), which help prevent injury to the eye when they capture flying insects. The shortwing and the bush-robin usually forage in the understorey of the forest, while the rufous-gorgeted flycatcher mostly perches at middle levels, sallying from its perch to catch flying insects. These flycatchers are known to join mixed hunting parties of birds. “A mixed hunting party offers safety in numbers as there are more birds looking out for a predator. Also, different species play different roles in a mixed hunting party. Some species of birds will flush out insects from leaves and bark that are preyed upon by the flycatchers,” said ornithologist Shashank Dalvi.

The verditer flycatcher (Eumyias thalassinus) cannot be mistaken for any other flycatcher thanks to its vivid turquoise-blue colouration. I was able to spot a dazzling one against a golden-green backdrop of bamboo on one of my morning walks. It usually chooses an exposed perch from where it sallies forth to hunt insects. 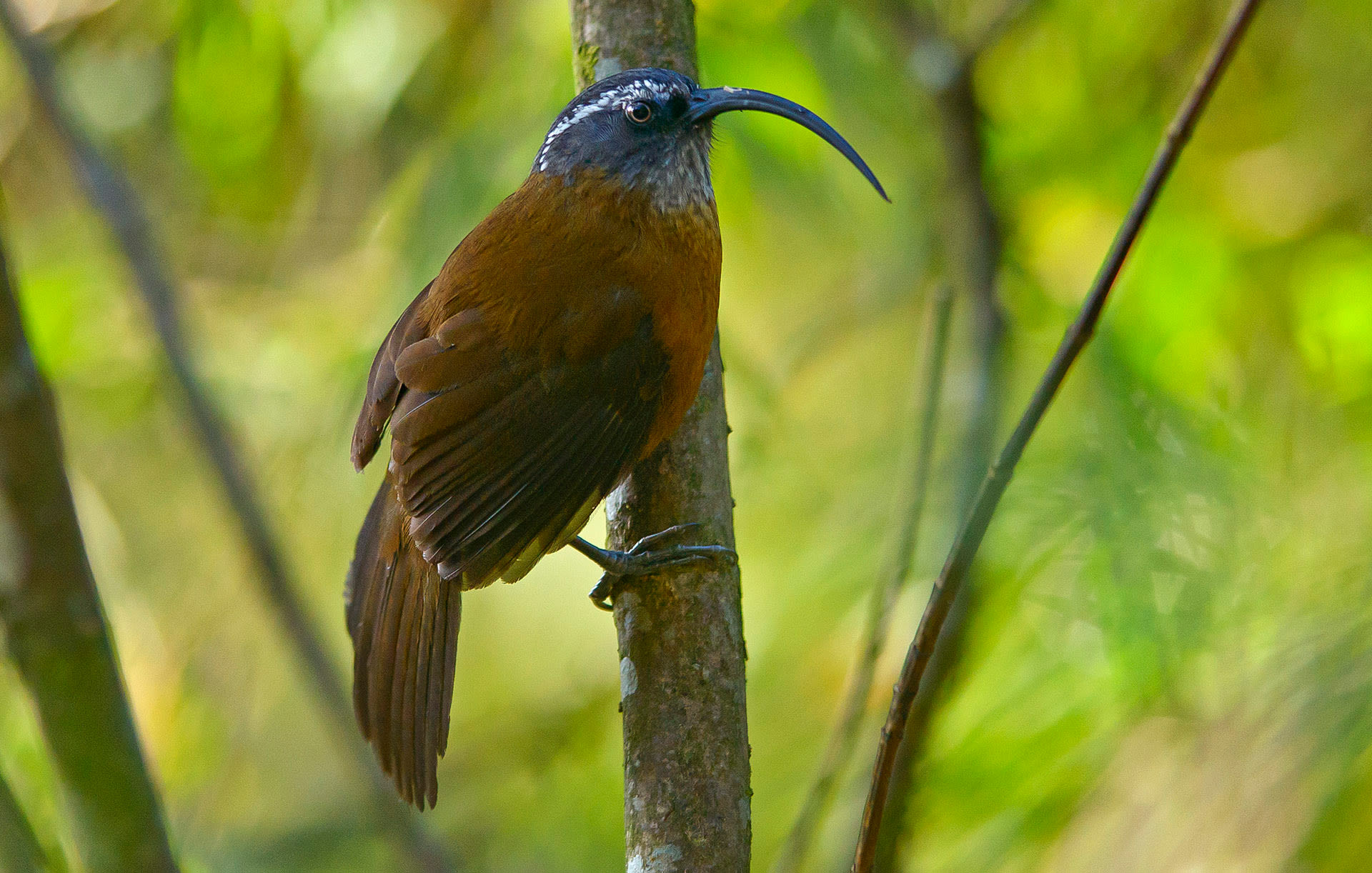 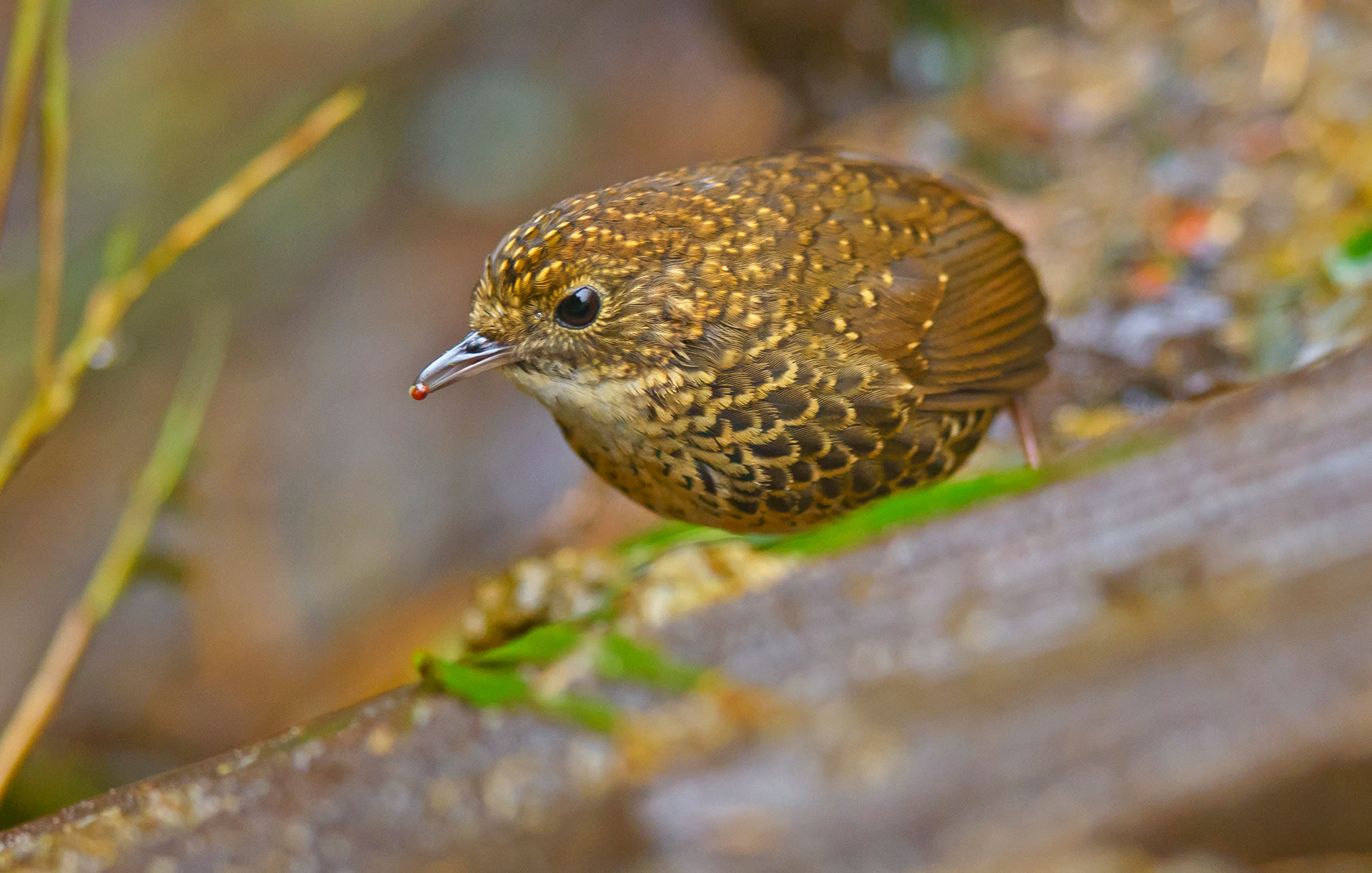 (Left) The slender-billed scimitar-babbler’s (Pomatorhinus superciliaris) distinguishing feature is its bill that’s shaped like a curved sword. It usually moves along the lower levels of the forest in large, noisy flocks. “The slender-billed scimitar-babbler is a specialist feeder. Unlike other birds, it can reach for insects inside very thin crevices with its thin, long bill,” said Dalvi. (Right) The scaly-breasted cupwing (Pnoepyga albiventer) , also known as the scaly-breasted wren-babbler, is a tiny brown bird with scale-like markings on its breast. It is usually seen near sources of water in montane forests.

The brightly coloured and well-marked Darjeeling woodpecker (Dendrocopos darjellensis) is found in the northern regions of the Indian subcontinent, especially in the high-altitude Himalayan foothill forests. Usually seen singly or in pairs, it has a densely streaked yellowish belly and patches of pale yellow-orange on the neck and throat. The male has a red patch on the back of the crown which the female (seen here) lacks.

Encounters with the Red Panda, the Elusive Bear-Cat of the Himalayas