Dance of the Black-necked Cranes in Ladakh

Every year, flocks of black-necked cranes descend upon the Changthang Plateau to breed, nest, and look after their young

Cranes have long been revered by human civilisations for their grace and beauty. The leggy, water-loving birds are intertwined with myths from as far away as North America, and as close by as Ladakh. In Roman stories, the dance of the cranes — part of their elaborate courting ritual — is seen as a celebration of love and joy. Cranes mate for life, or until the death of one partner.

In China, the movements of cranes have inspired timeless kung fu moves, that are practiced even today. (Remember Master Crane from Kung Fu Panda?) Japanese culture considers the crane a holy creature, alongside the dragon and tortoise, symbolic of happiness and eternal youth. The crane finds expression in many styles of origami, and it is said that one who folds a thousand origami cranes will be granted a wish by the bird.

The black-necked crane (Grus nigricollis) is no different. The only alpine species of crane in the world, black-necked cranes are found in the higher altitudes of China, India, and Bhutan, and are celebrated in each of these cultures. Their status has been declared Vulnerable by the IUCN.

In the Changthang Plateau of Ladakh, where some black-necked cranes come for breeding in summer months, the birds are considered symbols of good luck. In the colder winter time, birds fly to Bhutan and parts of Arunachal Pradesh, where they have inspired songs and festivals. Tibetan Buddhism considers the black-necked crane an embodiment of the Sixth Dalai Lama.

One of the reasons this species is so venerated is because of its spectacular rituals. The black-necked cranes engage in wonderful courting displays involving song and dance before breeding season. Considering adult birds are over a metre tall, it is quite a sight to witness.

The sense of awe they evoke may be magnified by their migratory nature. Black-necked cranes travel annually between their breeding habitat, and non-breeding (or wintering) habitat, spending around six months in each location.

Black-necked cranes primarily breed in the Qinghai-Tibetan Plateau in south central China, and in contiguous areas of India like the Changthang, where this image was taken. Their arrival in the Sangti, Zemithang, and Chug valleys of Arunachal Pradesh has also been noted. Black-necked cranes (Grus nigricollis) are the only alpine species of crane in the world, with an estimated population of around 13,500.

The cranes arrive in Ladakh around end-March to early-April, settling around the region’s high-altitude lakes, including Tso Kar, Hanle, and Pangong. This image was taken near the village of Hanle in Ladakh.

Shortly after their arrival, the birds establish territories, and courtship spectacle begins. The cranes flap their wings, make vocal sounds, and move in a manner that resembles a dance. “It is a wonderful sight to observe,” says Dr Pankaj Chandan, wildlife biologist and an expert on Himalayan ecology who has been studying these cranes for over two decades.“ Sometimes, the male will throw small bits of yak dung into the air, when the female approaches.” 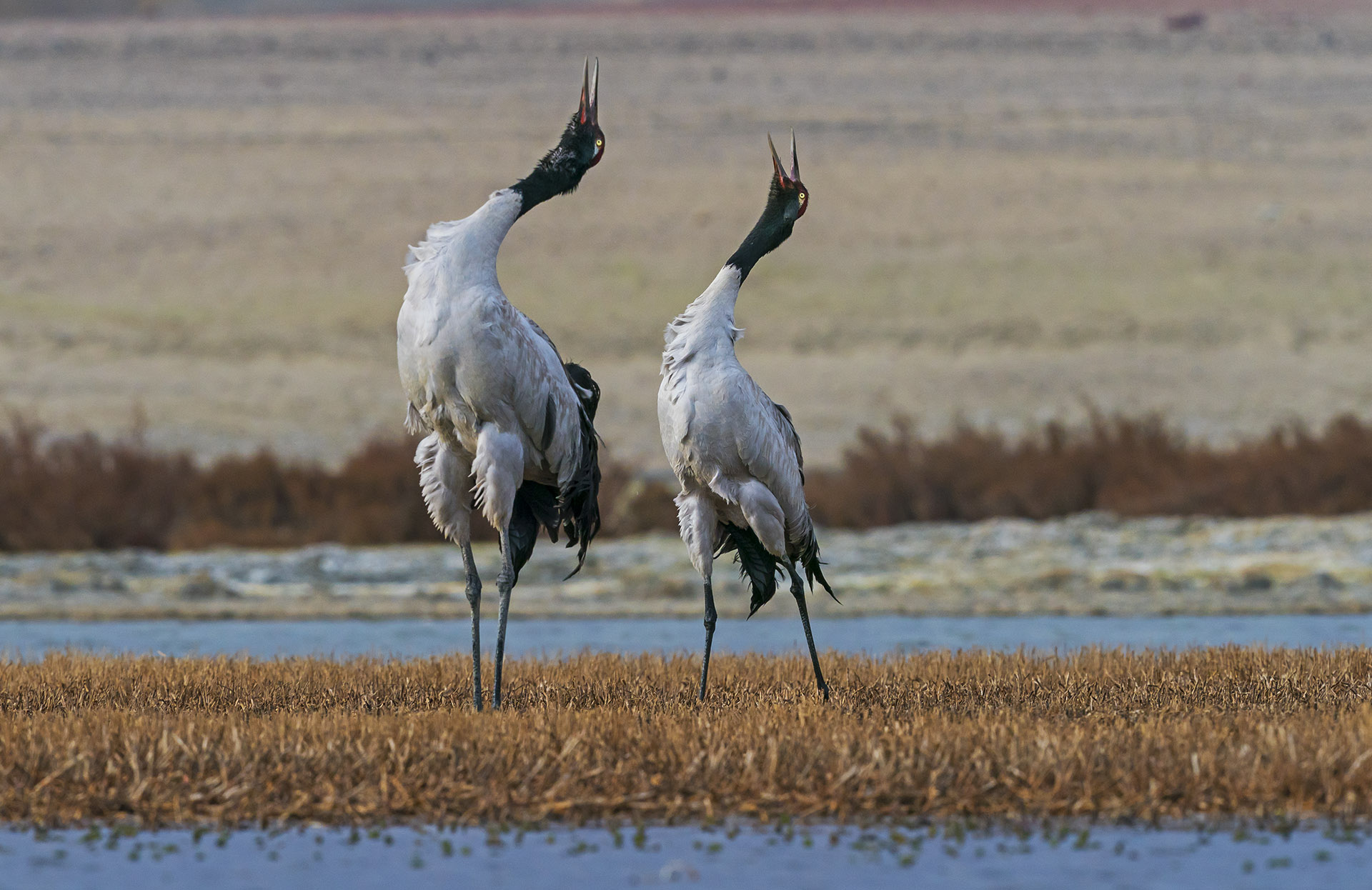 Displays peak between 5.30 and 8 am, though the cranes do engage in courtship at other times of the day as well. In most cases, partners dance on grassy patches on the ground, or in the snow around wetlands. “But never in the water,” says Dr Pankaj. Courtship and mating continues until late-April and May.

Building a home for the family-to-be is the next step. Nests are generally made from mounds of soil, grass, or both. Often, they are built on patches of land amidst lakes, giving the birds a sweeping view of the landscape, and any predators eyeing their eggs. “Some nests are anchored to the lake bed from below with sticks,” says Dr Pankaj, ensuring it remains stable despite winds.

Packs of free-ranging dogs are a particular concern for these birds, and numerous other species in Ladakh. To keep their progeny safe, one parent is always present at the nest after the eggs are laid.

Females lay a clutch of two eggs, generally in May, when the snow has melted and the Himalayan summer is underway. Black-necked cranes incubate their eggs for 30-36 days.

During this delicate time, both partners share domestic duties. At night, females incubate the eggs, while males watch for predators. When dawn breaks, the males take foraging trips. Upon their return they switch places, and the males incubate the eggs, while females forage for fish, lizards, and vegetation in the vicinity of the nest. Females do not let the nest out of their sight during this phase.

Once the chick hatches — generally in June — both parents hunt for their young, “cutting the food into small pieces, so it’s easier to eat,” says Dr Pankaj. “A lot like human parents, actually.” On cold windy nights, mothers hide the chicks in their feathers for warmth. Interestingly, the chicks are expert swimmers, though parents do not swim at all. 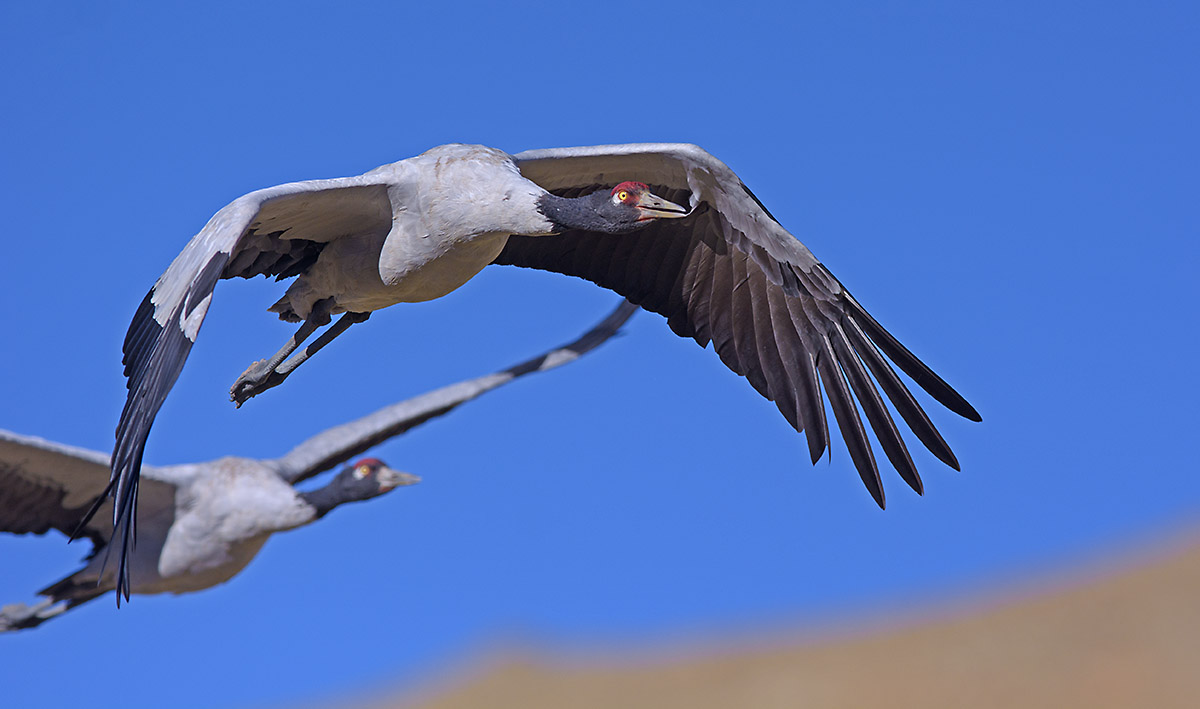 At two months of age, flight school begins. Days are spent teaching the young to take-off and land safely. Lessons are arduous for the young fledglings, but a joy to watch as nesting sights are filled with parents teaching their fuzzy, gangly chicks how to fly. This continues until September, with birds taking short foraging trips nearby, and eventually, longer flights to other valleys.

Practice is crucial, for by October the young ones must migrate with the parents to their wintering grounds. “When we see the birds flying high in the sky, we know that they will be leaving soon,” says Dr Pankaj.

By end-October, the cranes start to arrive in the Phobjikha valley of Bhutan, where they have something of a celebrity status. One of the locations where the birds take residence is near the Gangteng Buddhist Monastery, where a black-necked crane festival is held annually on Nov 11. Legend has it that the birds circle the monastery three times upon arrival, as if practising the Buddhist act of circumambulation that is observed at holy sites.

Parents continue to nurture the young during this time, aiding them on foraging trips, and teaching them how to defend themselves against predators.

On November 11, every year, the day-long black-necked crane festival is celebrated with aplomb. Music fills the air, and the hours go by singing folk songs and watching masked dance performances by locals, schoolchildren, and monks. This festival began in 1998, as an initiative to raise awareness about this endangered bird, and to create economic incentives for local communities to protect the species.

Six months later, when summer is around the corner, the birds begin their annual migration back to Ladakh and parts of China. They return as family units, but upon arrival, the parents cease caring for the young. “In some cases, they just shoo them out of their territory,” Dr Pankaj says. The young adults must fend for themselves now. They begin their own courtship dances to find a mate, territory, and eventually to build a family of their own, like this solitary crane perched on his nest at Tso Kar.