For a large part of its course, the Cauvery River is exploited and abused. However, a few pockets of wilderness, including a 110-km stretch that runs through the protected Cauvery Wildlife Sanctuary, provide a sliver of hope

I wonder if there is a single venerated river in India that has not been trashed. It is hard to be optimistic and gushing with joy when I see a river these days, knowing what it must go through just to run its course and reach the sea. Thanks to our actions, that primal impulse of a river to flow toward the ocean is severely threatened. The Cauvery is a great example. The story of the Cauvery is like the story of many Indian rivers. But there are also aspects of this river that are unique to each bend, meander, pool, rapid, and fold. Despite being treated with disdain and neglect, the Cauvery still surprises us with elements of life that few rivers can claim.

The Cauvery is worshipped at its source in Talakaveri in the Brahmagiri Hills of Kodagu in the Western Ghats, and intermittently at temples along the river. Yet, this fact is largely relegated to the back of everybody’s minds when it comes to treating the river with respect. This same river has inspired literature. Its waters have been fought over. It powers towns and cities not just with electricity but also sand for their growth.

Flowing east from the Western Ghats, across the vast and ancient Deccan Plateau, this river flows with rage, calm, or slows to a trickle depending on the season. For centuries, fishermen have cast their nets in the Cauvery to sustain themselves, farmers have used the waters to feed thousands, and kings have used the river as fortification to protect their kingdoms. Throughout the length of nearly 800 km from source to sea, this is a river that gives.

My first trip to the Cauvery as a biologist was in the year 2012. I was looking for otters. That, I would realise later, was the easy part. Watching the scale of degradation along the river completely changed my state of mind. Industrial-scale sand mining to meet the demands of metropolises, mushrooming mini-hydel projects, dynamite fishing, and pollution had turned the river into a captive body of water that was being used and abused. What gave me hope though were the pockets of resistance and resilience along the river. The river is still home to one of the largest freshwater fish, the mahseer, one of the largest populations of smooth-coated otters anywhere in their range, and the sentinels of riparian forests — fish eagles.

It is in the Cauvery Wildlife Sanctuary that the river regains some semblance of its past glory — a wild river that elephants, honey badgers, crocodiles, four-horned antelopes, and others depend upon like they have for millennia. By the time the river enters this slice of wilderness, humans have already left their imprint, but nevertheless, this is as good as it gets. 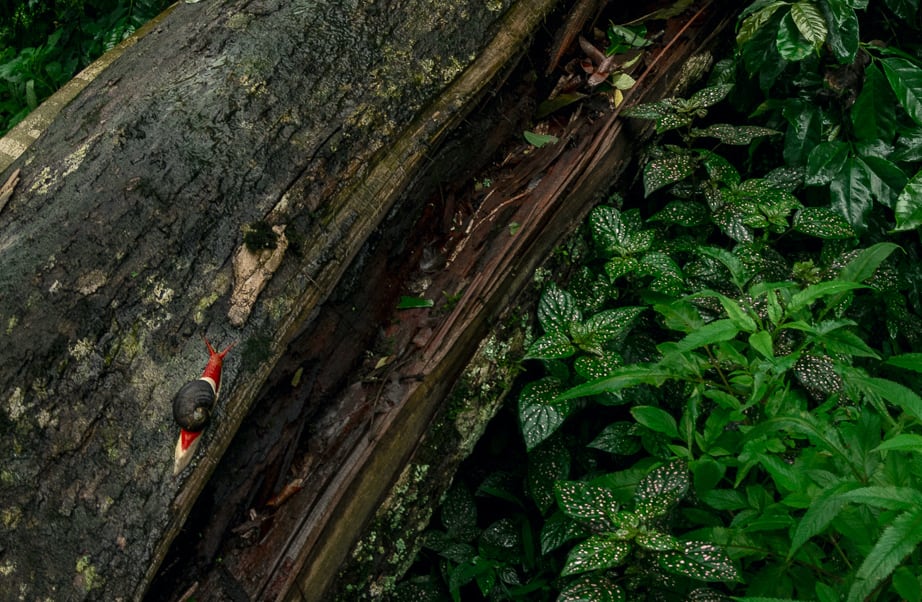 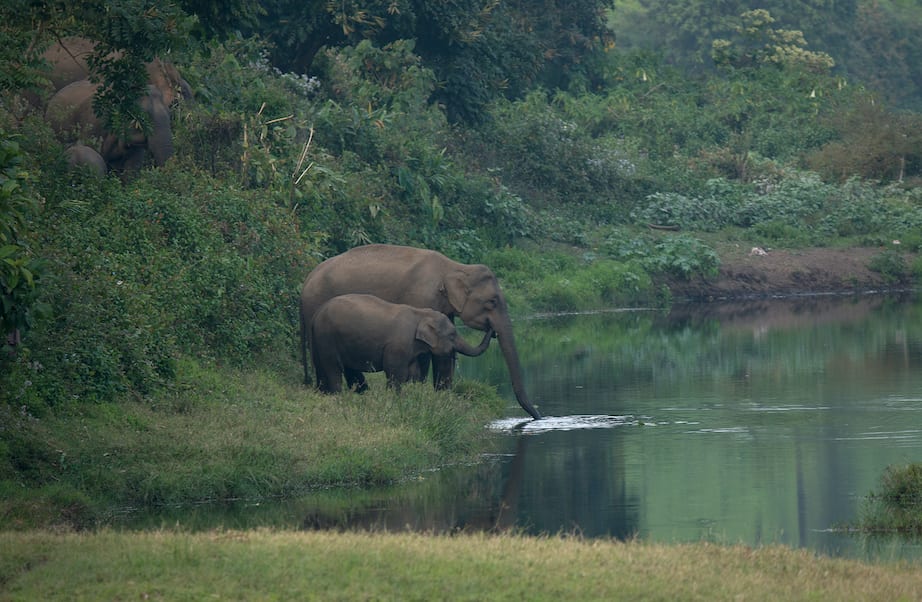 Arising in the tall and dark-canopied wet, evergreen forests of the Western Ghats, the Cauvery starts her eastward journey through Coorg district, initially as a little stream. It flows through small patches of forests, coffee plantations, and paddy fields, gaining strength rapidly as other streams join it. The Brahmagiri Hills, where the river originates, is an island of dense, evergreen forest surrounded by an ocean of modified landscapes. In this land of rolling hills that is the Coorg district, the river is characterised by meanders, rapids, pools, and cash crops that have largely replaced native riparian vegetation. This stretch of about 70 km of the river is home to a surprising array of biodiversity from mighty elephants, at least two species of otters, and fish eagles, to little brightly coloured native snails. Photos: Nisarg Prakash (top), Soumabrata Moulick (above left), Ganesh Raghunathan (above right) Cover photo courtesy: Abhi Mandela 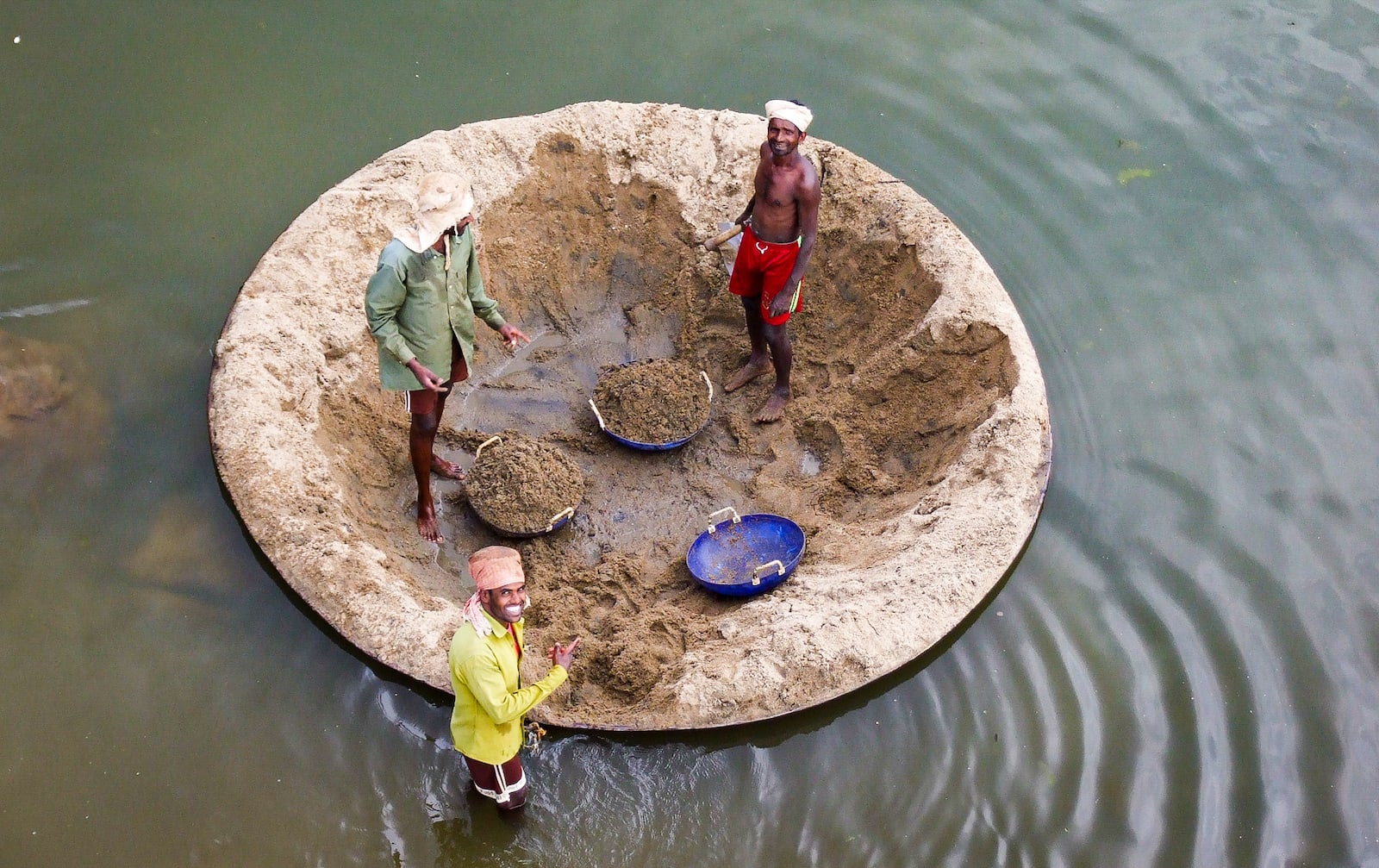 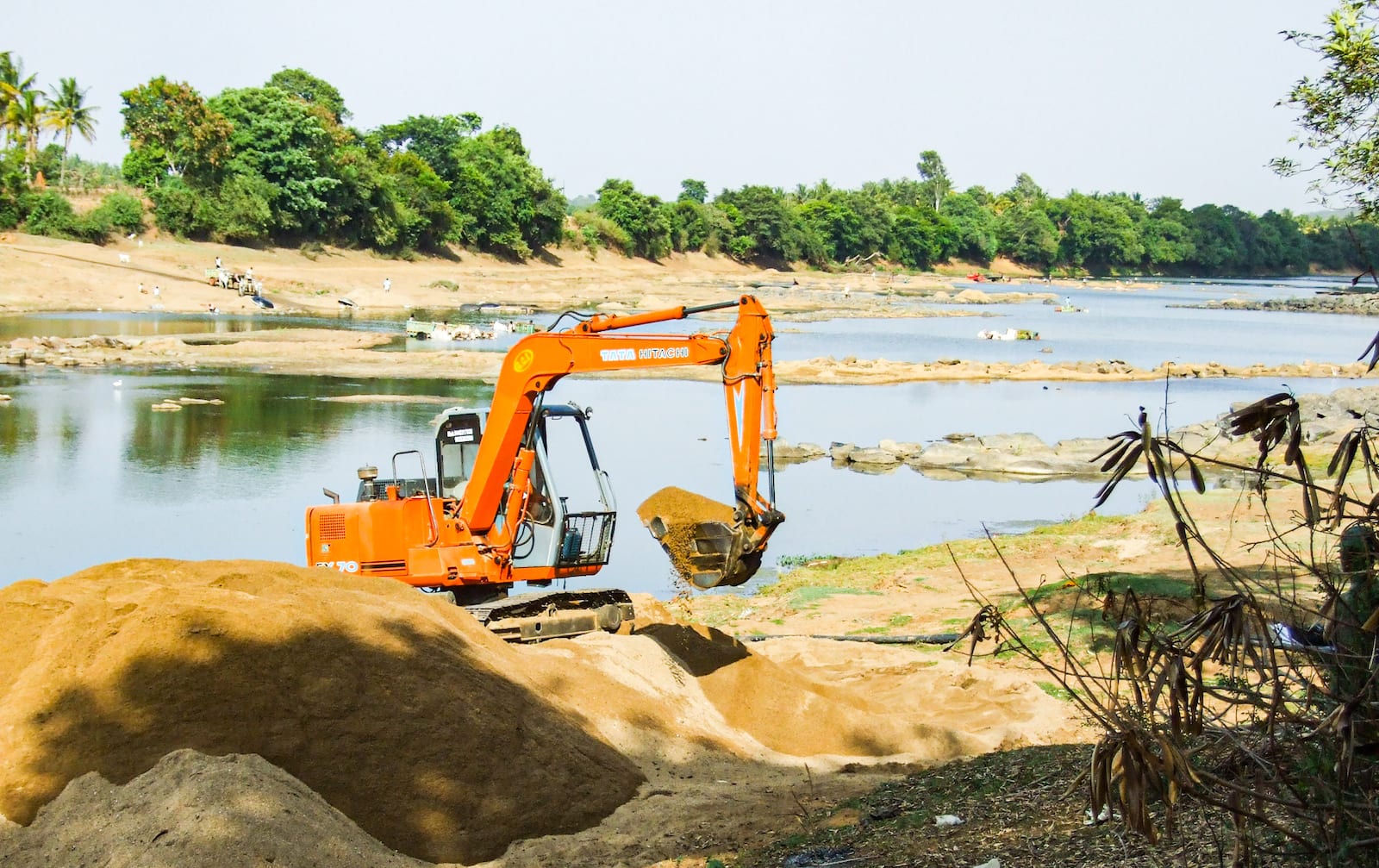 Departing the forest-plantation landscape of Coorg, the river enters the ancient Deccan Plateau and begins the slow journey across villages, towns, and agricultural plains. Three activities come to dominate the slow-flowing river in the plains — intensive sand mining, intensive fishing, and intensive agriculture. It is intensive sand mining that has completely changed the fabric of this riverine ecosystem — eroding banks, emptying riverbeds of sand, and causing the river to go dry much earlier in the season. Sand mining is hugely profitable, mostly illegal, and comes at a high cost to the river. The volume of sand being taken out cannot be replenished by the river, and without sand to hold water, the river runs dry, affecting not just the region’s biodiversity, but the livelihood of farmers, fishermen, and anybody dependent on it. Photos: Nisarg Prakash 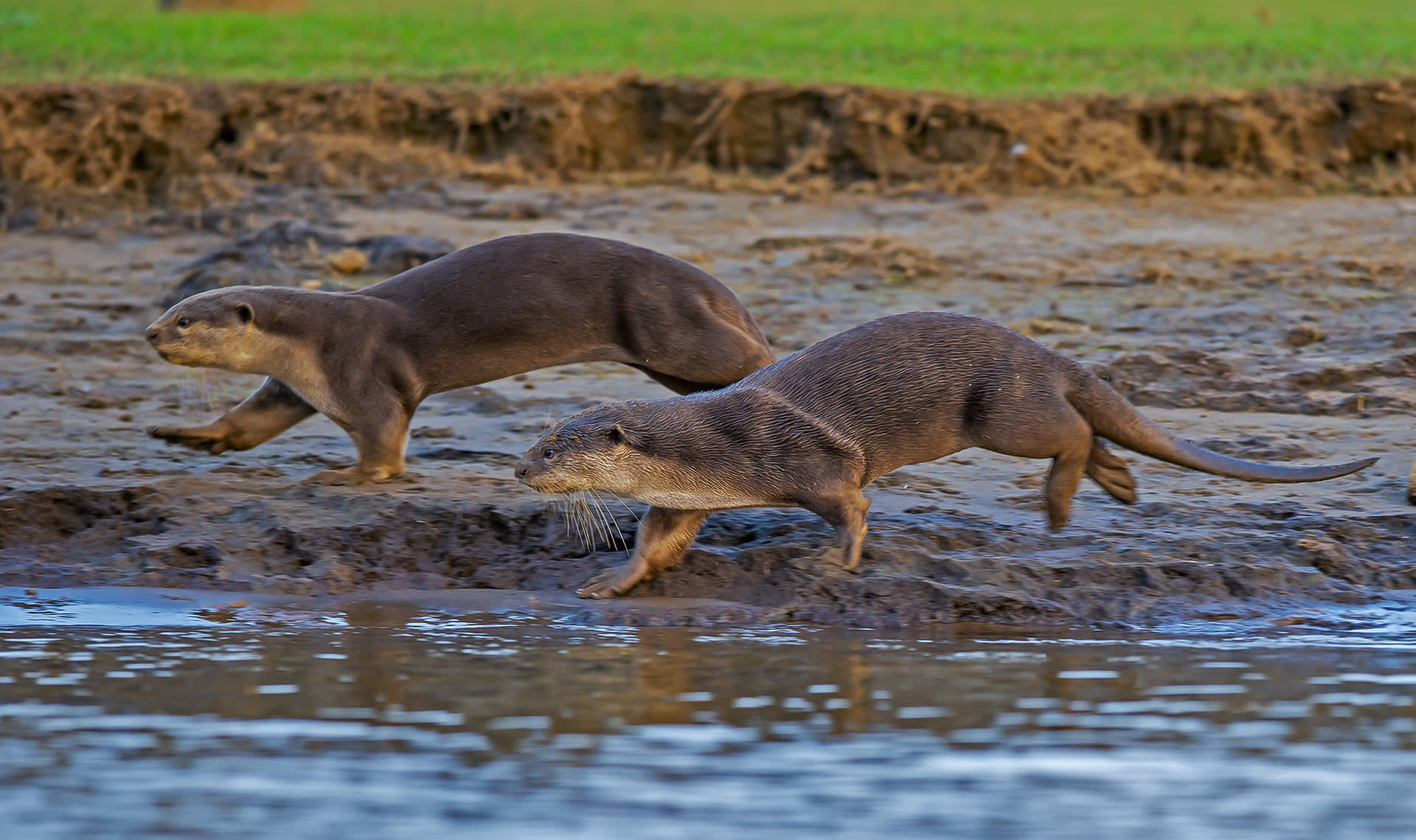 The Cauvery’s sand banks are vital to otters, mugger crocodiles, black-bellied terns, and numerous other creatures. But owing to unrestricted and intensive activity, many of these animals have now largely disappeared in the first 220 km of the river’s course. Fishing in the Cauvery is also intensive, leading to fierce competition among various fishermen, but also between otters, fishermen, muggers, and other animals that depend on fish. Despite the drastic transformations taking place in the plains, smooth-coated otters have managed to persist thanks to their resilience and incredible ability to adapt quickly to change. They can be sighted in the middle of agricultural landscapes, feeding on freshly caught fish. Additionally, they’ve learnt to snack on fish caught in fishing nets, much to the ire of fishermen. Photo: Dhritiman Mukherjee

Centuries-old check dams (like this one) still supply water to agricultural fields in many places. They are not as damaging as the spurt of newer mini-hydroelectric projects, which falsely promise clean energy and run on subsidies, but are unable to generate adequate power. More importantly, these walls of concrete and sand across the river obstruct migrating fish, massively endangering not just their lives but also the livelihoods of fishermen. Photo: Nisarg Prakash 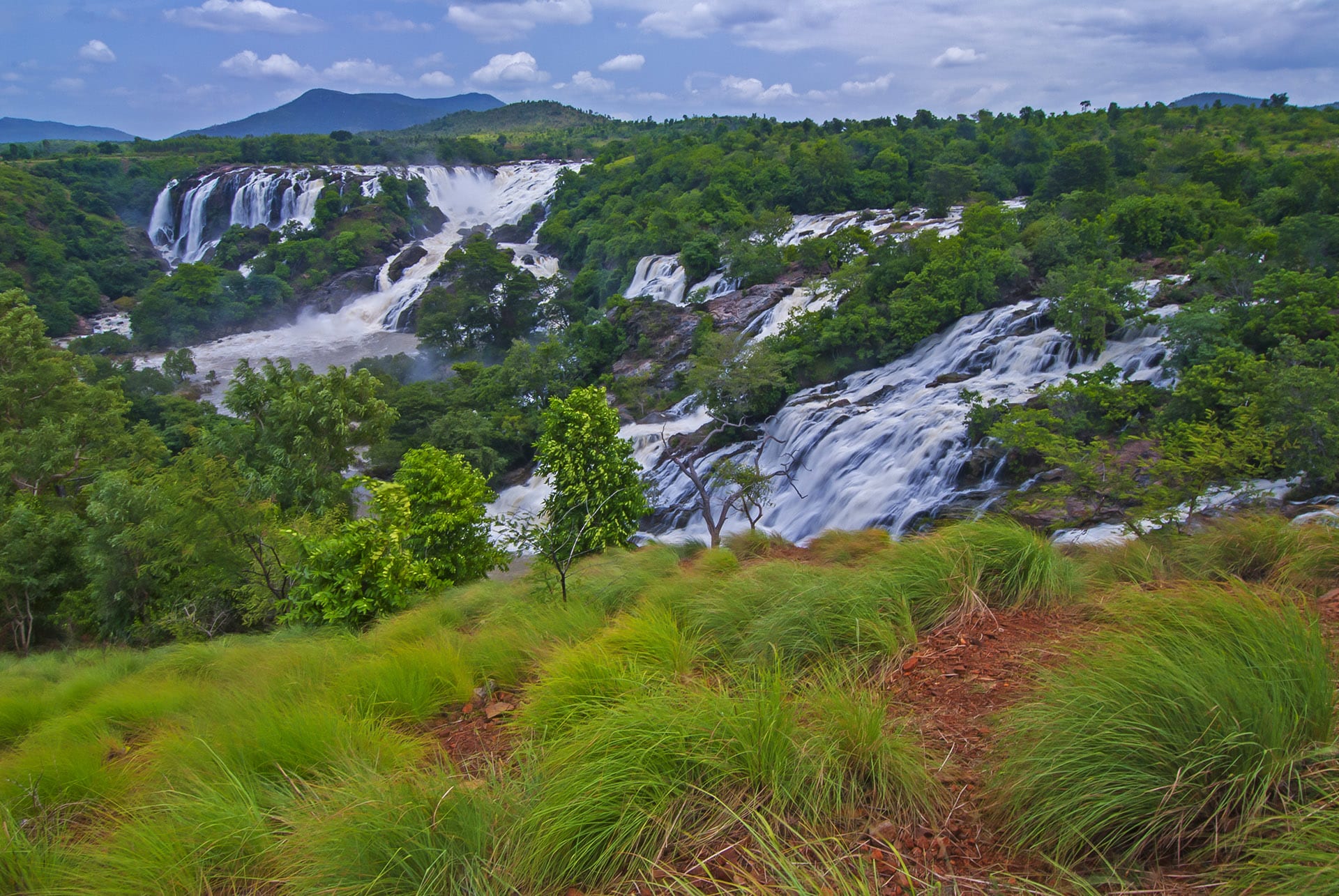 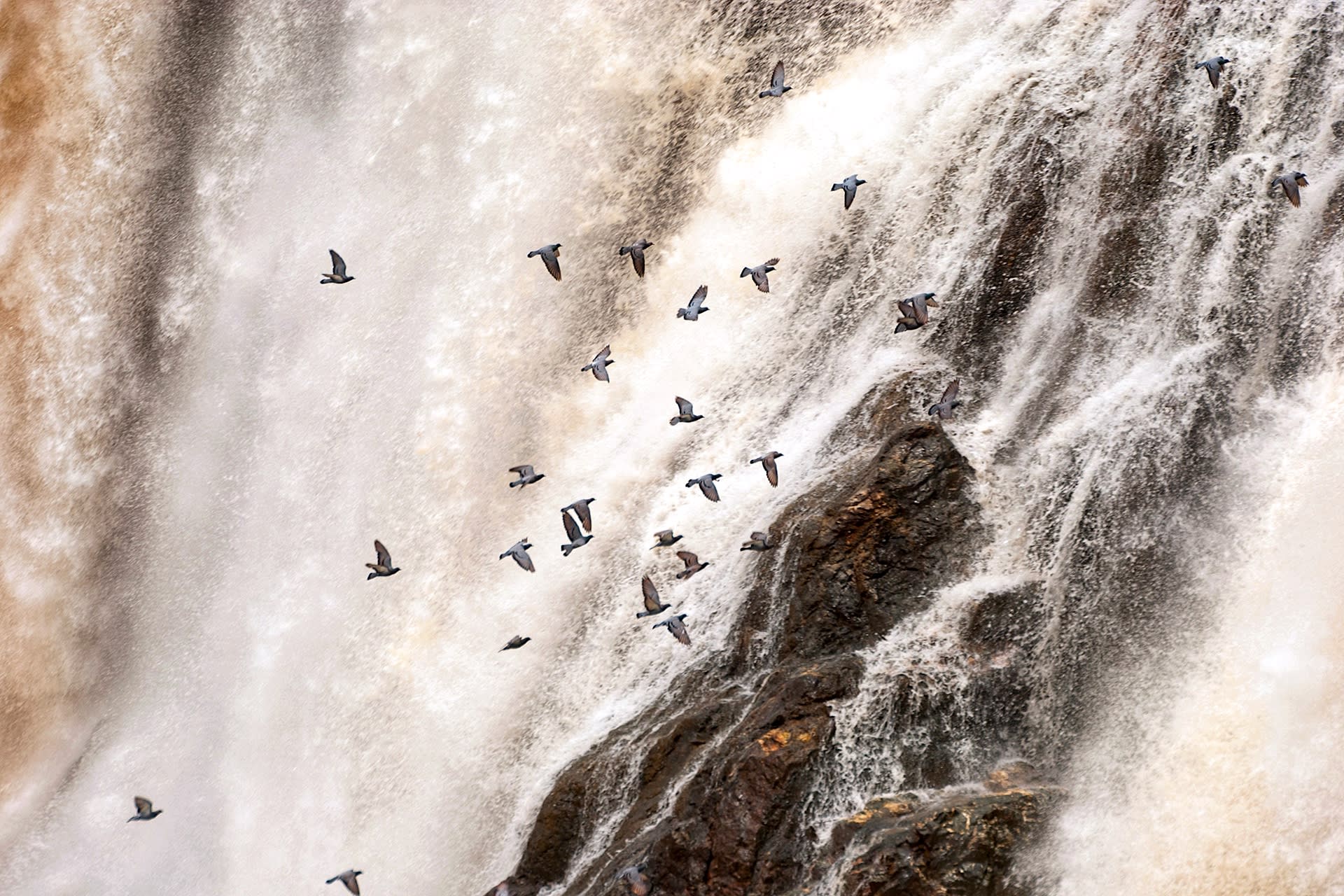 At the waterfalls of Gaganachukki and Barachukki the Cauvery plummets from the largely agricultural and ancient Deccan Plateau into the forested river valley of the Cauvery Wildlife Sanctuary. Time seems to stand still for the next 110 km with the river flowing through a primordial landscape where human presence is low and the wilderness dominates. Large crowds visit the waterfalls during the monsoon to see the Cauvery flowing in all its splendour. Photos: Dhritiman Mukherjee (top), Ganesh Raghunathan (above)

The Cauvery Wildlife Sanctuary spread over 1,000 sq km is defined by the ribbon-like Cauvery River that flows through its heart. This otherwise dry landscape has some of the finest riparian forests in the country on both riverbanks — a rich, shimmering green even in peak summer. Deep pools, rapids, whirlpools, abundant sand banks, and gorges define this section of the river. While the landscape might seem idyllic, there are times of the year when huge crowds do throng some of the temples within the sanctuary, bringing with them large amounts of trash and unfiltered noise. Photos: Nisarg Prakash

Pre-monsoon showers in April start to green the bone-dry landscape the hills surrounding the sanctuary. It is also the time of the year when mugger eggs hatch. The hatchlings stick close to their den often guarded by the mother and take cover under vegetation. They are easy prey for predators like eagles, kites, large turtles, monitor lizards, and even large fish. Muggers are commonly seen in the sanctuary but are extremely rare in other stretches of the river owing to fishing nets and persecution. Photo: Nisarg Prakash 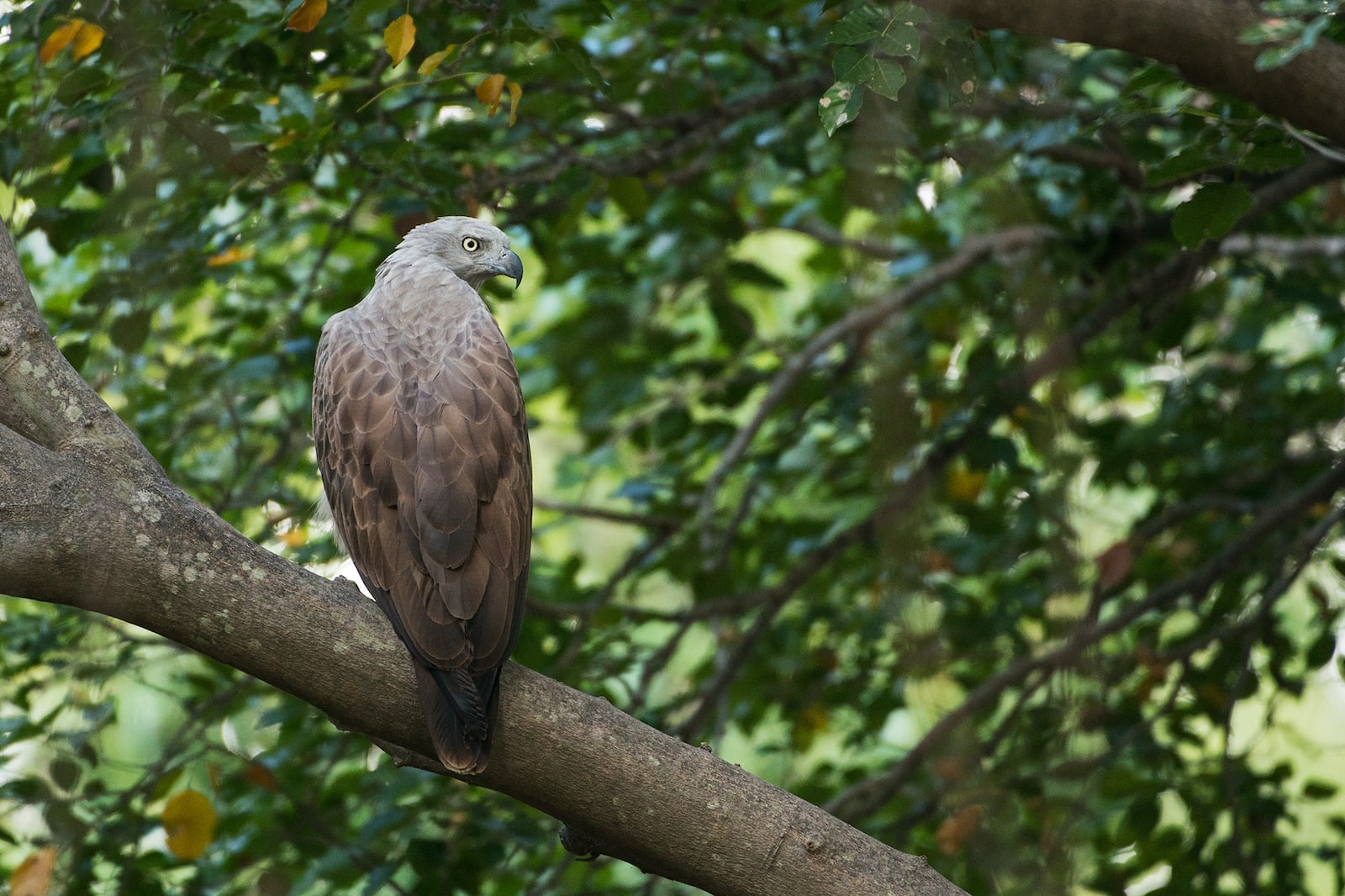 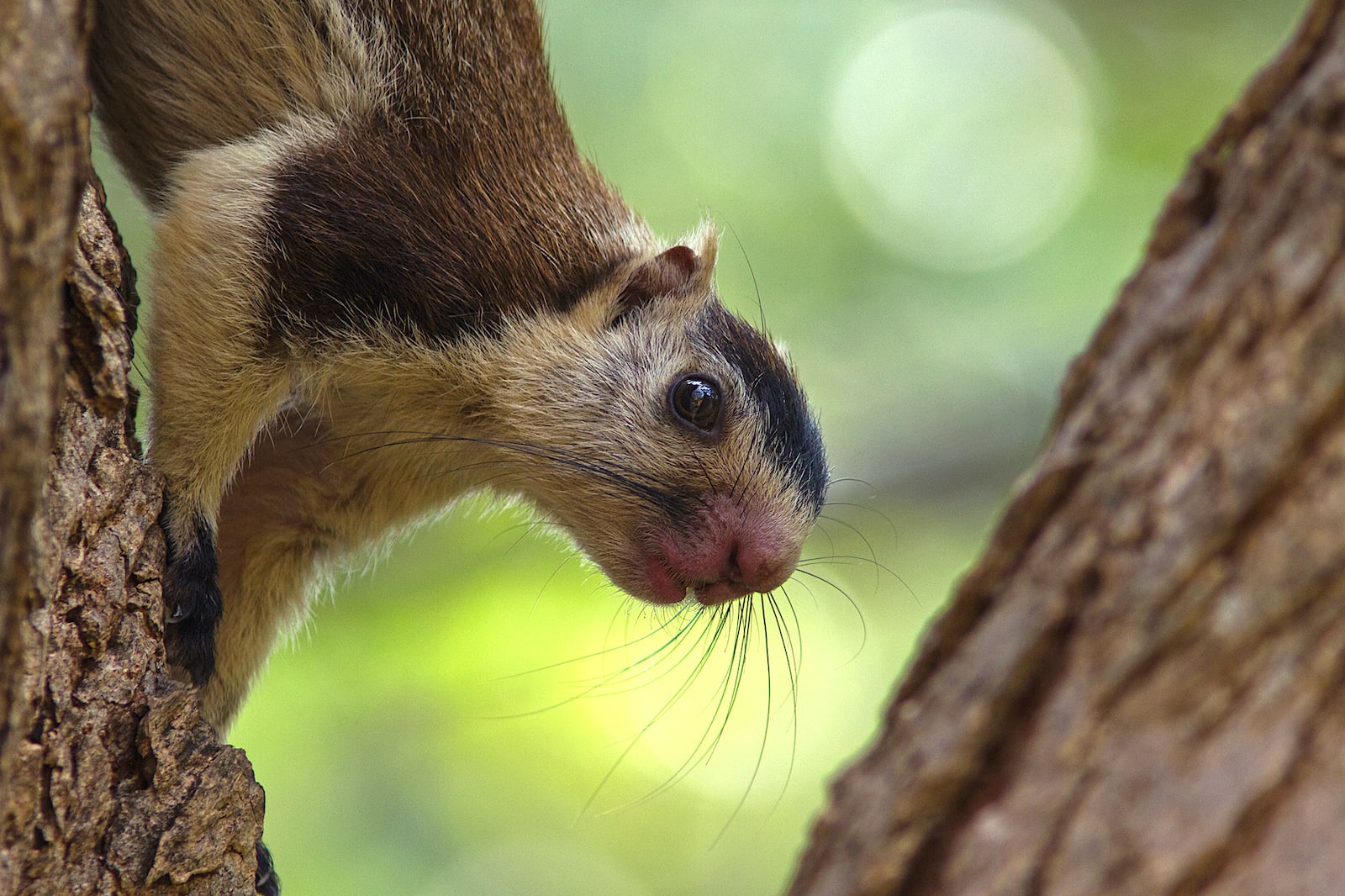 The Cauvery Wildlife Sanctuary presents the ideal habitat for mugger crocodiles, softshell turtles, smooth-coated otters, and fish eagles (left) who soar overhead swooping down on unsuspecting prey. This sanctuary is probably the last stronghold for the grizzled giant squirrel (right), which is only found in a handful of places apart from here. These large, diurnal squirrels inhabit tall trees bordering the river. However, due to loss of these riparian habitats they appear only in disjunct pockets. Photos: Shreeram MV

This last wild place along the Cauvery is protected by a group of dedicated forest department staff who patrol the sanctuary to deter hunting, poaching, fishing, timber felling and other illegal activities. Pressure on this sanctuary from the surrounding villages and towns is immense. Every summer, entire hillsides are set on fire and if it were not for the forest department’s active work, the sanctuary would be a far cry from what it is today. A proposal under active consideration seeks to build a dam at Mekedatu, a narrow gorge within the Cauvery Wildlife Sanctuary. If allowed in this protected area, it would devastate this jewel and the Cauvery would be stripped off its last wilderness. Photo: Nisarg Prakash