Spiders are incredibly complex, both in the diversity of species and their behaviours. For over two centuries, a vast majority of scientific interest has centred around the former — with a particular focus on taxonomy, systematics and drawing checklists. Spider behaviour remains an underexplored treasure trove of natural history. For instance, uncovering more stories of how spiders care for their young can introduce new perspectives into areas like parental investment theory – a line of inquiry that investigates the intricacies of animals investing time and energy in raising their young. While there are well-documented stories of parenthood in the spider world, our understanding in this area is nascent. We continue to uncover new stories of parental care in spiders (like wolf spiders that carry and care for hundreds of young hatchlings on their backs or social spiders like Stegodyphus that work together to raise their young). As recently as 2018, scientists discovered a jumping spider (Toxeus magnus) that provides its young with a milk-like protein-rich substance in a process very similar to lactation. The growing scientific interest in spider behaviour has permeated the broader community of spider enthusiasts. With access to macro photography, passionate natural historians have documented and shared incredible moments of natural history. A testament to this growing sentiment is the story of Dr Abhijith APC, who spent two months between early December 2020 and late January 2021 in the company of a crab spider (Angaeus sp.) that shared his farm. Crab spiders (Thomisidae) are a family of spiders that get their name from their give-me-a-hug posture and penchant for scuttling away nervously, much like a crab. Angaeus is a relatively poorly documented genus within this spider family compared to the likes of “garden-variety” genera like Thomisus. The female Angaeus particularly piqued Dr Abhijith’s curiosity when he noticed that his eight-legged neighbour was sitting on an egg sac inside a rolled-up leaf. Over the next two months, he unintrusively followed her life as she diligently guarded her egg sac. After spending two months in each other’s company, they both watched as the spider’s eggs hatched and tiny hatchlings slowly climbed out to become the newest inhabitants of the farm. 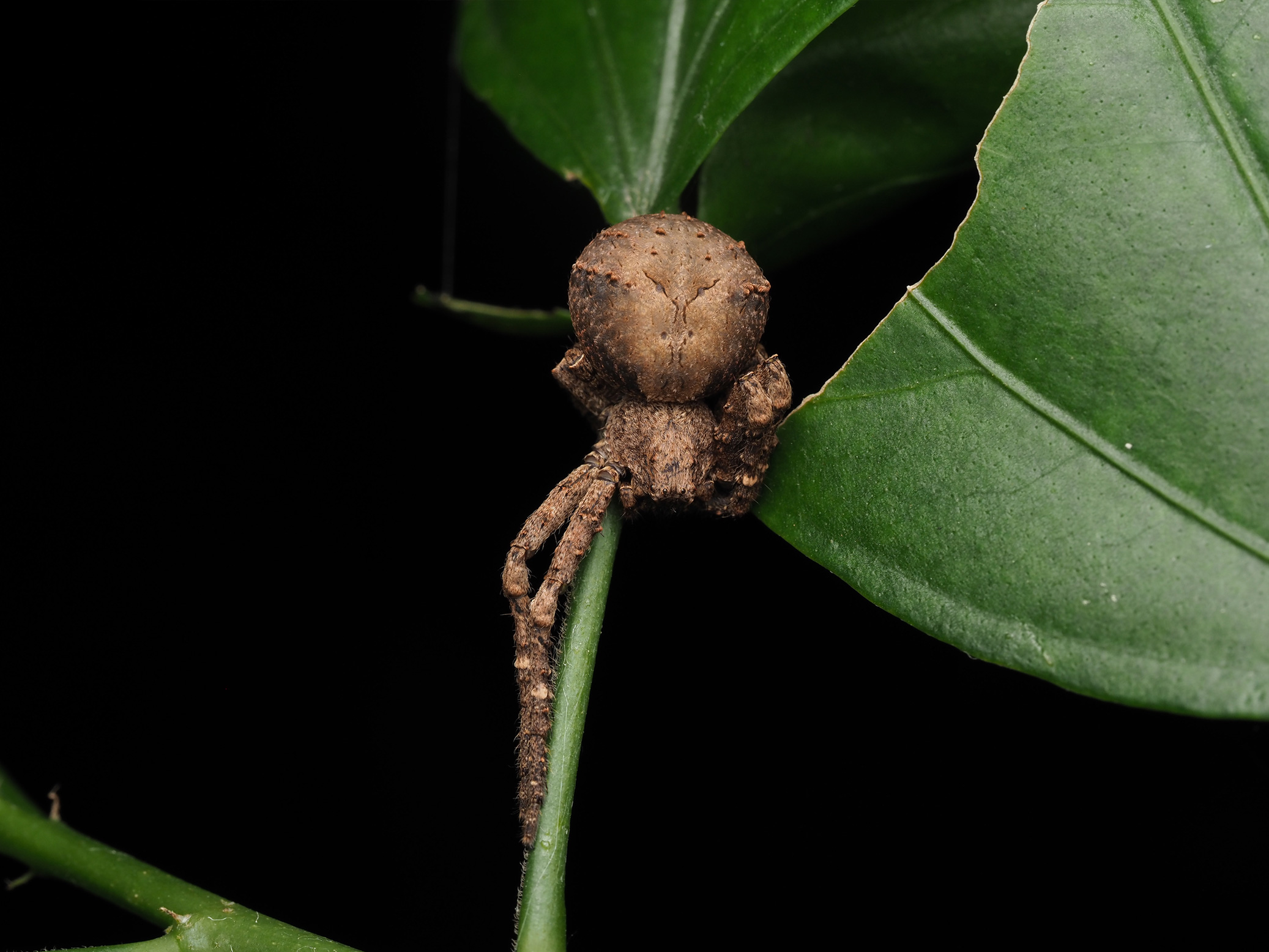 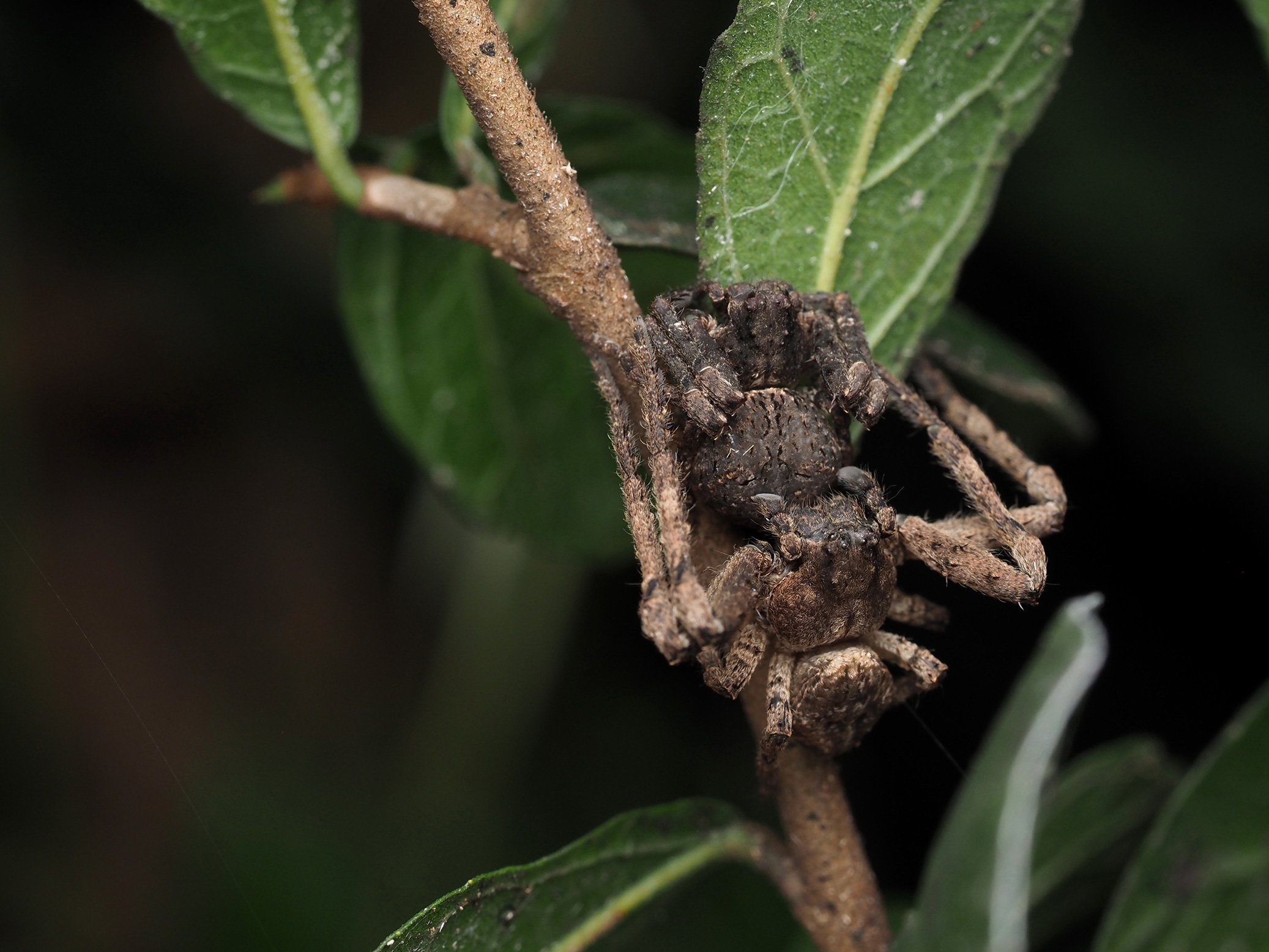 The genus Angaeus (left) was first described in 1881 by Tamerlan Thorell, a Swedish arachnologist who described over 1,000 species during his career. While most male crab spiders are tiny compared to females, a male Angaeus is slightly larger than his female counterpart. (Right) A mating pair of Angaeus with the male climbing onto the female. One way to distinguish the male of a spider species from his female counterpart is to look for swollen pedipalps (long appendages next to the mouth). Male spiders transfer sperm into their pedipalps, causing them to become bulbous. These palps are then used to transfer sperm into the female during mating. 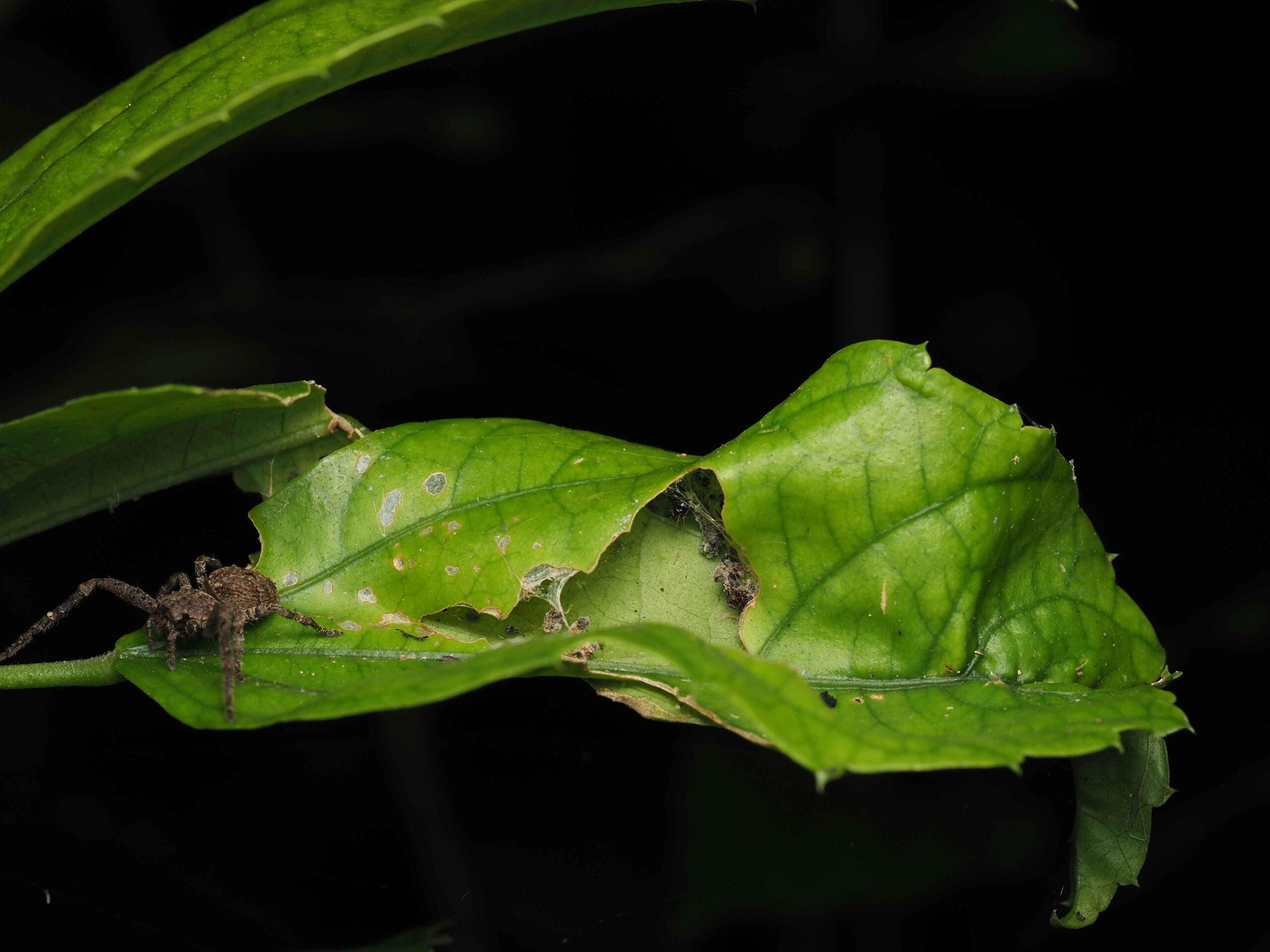 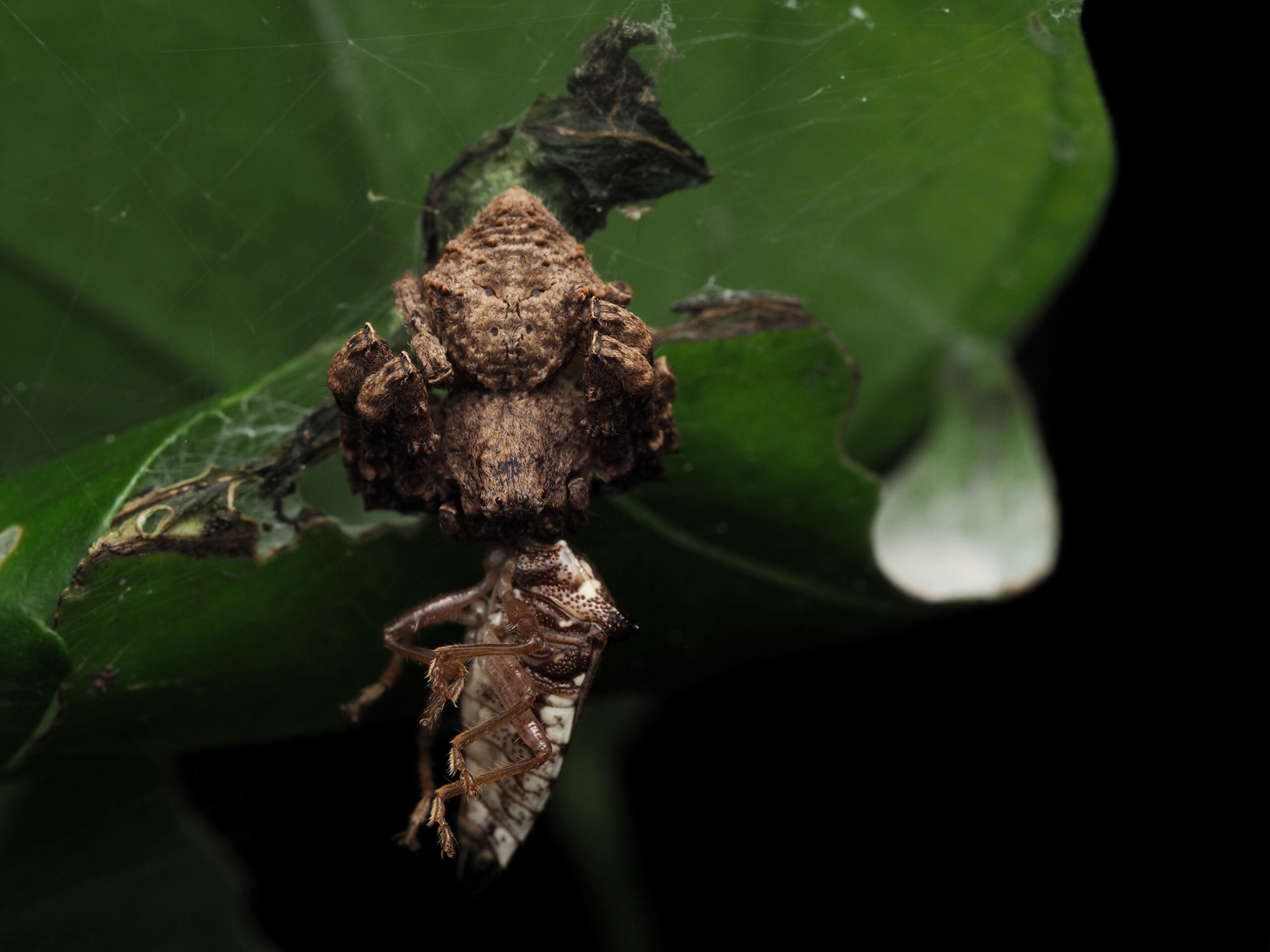 (Left) Angaeus like the rest of the Thomisidae family, are ambush predators that sit and wait patiently on plants for visiting arthropods. When an insect visits the plant in search of food or shelter, these cryptic mini predators emerge to make quick work of the visitor. While crab spiders are largely photo-documented feeding on visiting pollinators, they are generalist predators that will prey on any arthropod. (Right) An Angaeus feeding on a stink bug, Eocanthecona furcellata. Stinkbugs typically feed on plant matter, however, E. furcellata is a predaceous stinkbug that feeds on other arthropods like caterpillars. 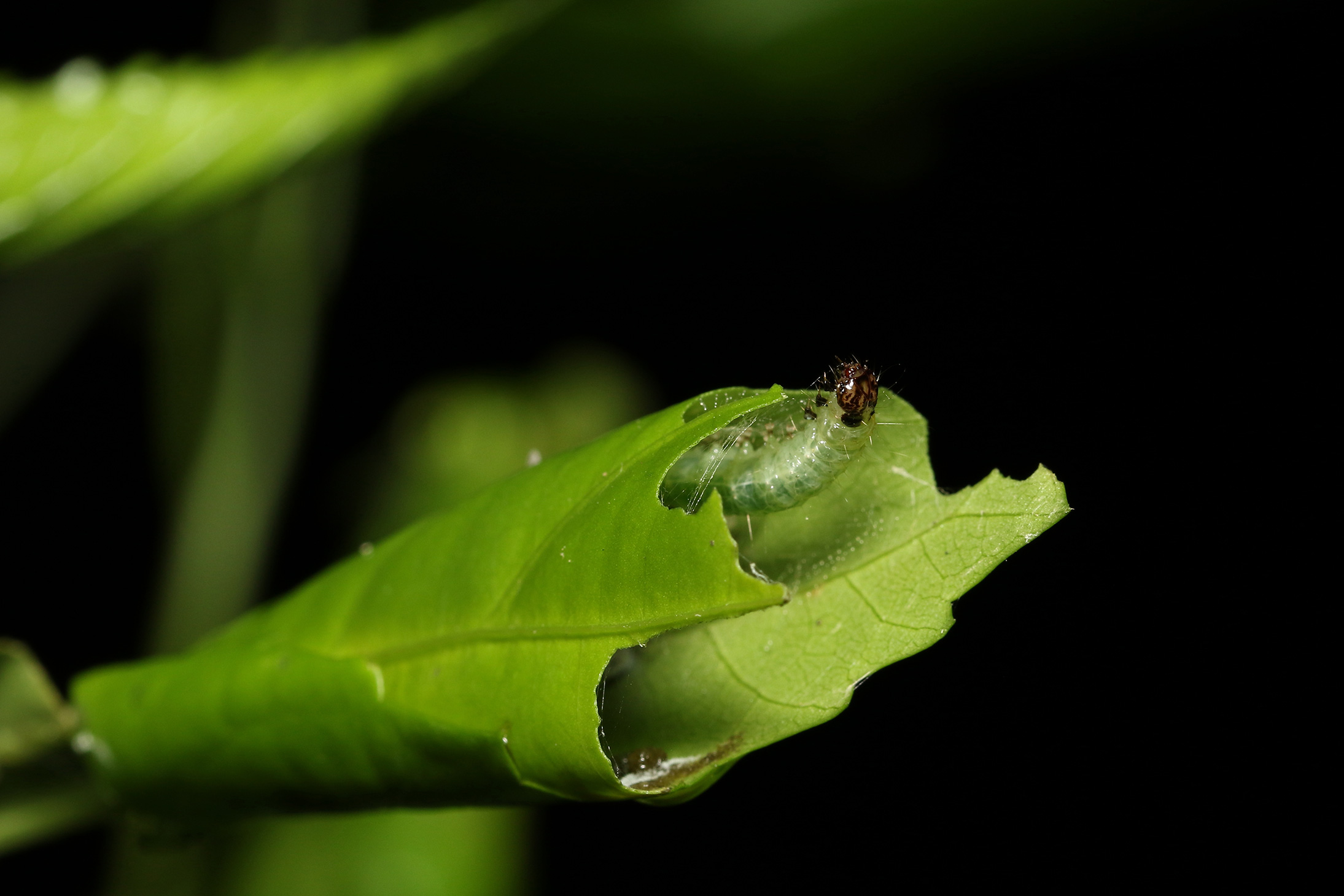 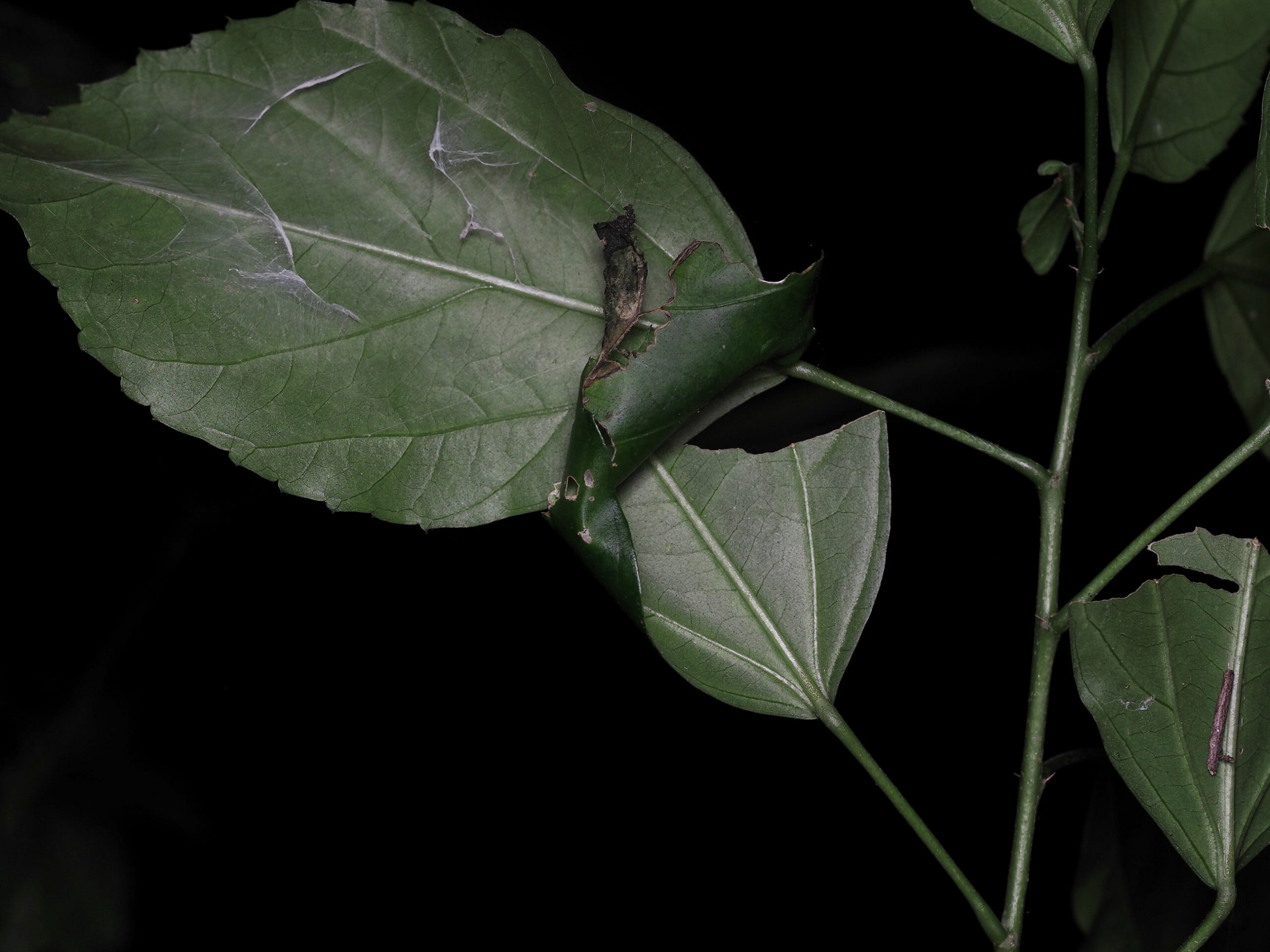 The rolled-up leaf used by Angaeus has its own intriguing origin story. A caterpillar of the cotton leaf roller moth (Haritalodes derogata) in search of food and shelter often finds its way to the leaf of a plant like hibiscus. On matters of food and shelter selection, H. derogata seemingly employs the “why not both?” argument. (Top) The caterpillar rolls itself up in a leaf and begins to feed on it. Cotton leaf roller caterpillars are known to leave behind half-eaten leaf rolls. Some even have the misfortune of being forcefully removed from their leafy abodes by predators like weaver ants (above left) or yellow sac spiders (Cheiracanthium sp.). Weaver ants are prolific predators that rule the canopies and readily hunt fleshy caterpillars like the cotton leaf roller. (Above right) Once the caterpillar has left the rolled-up leaf, willingly or otherwise, the leaf is a temporary shelter waiting to be used by anybody ready to deal with the powers that be on the plant (weaver ants and insectivorous birds, among others). 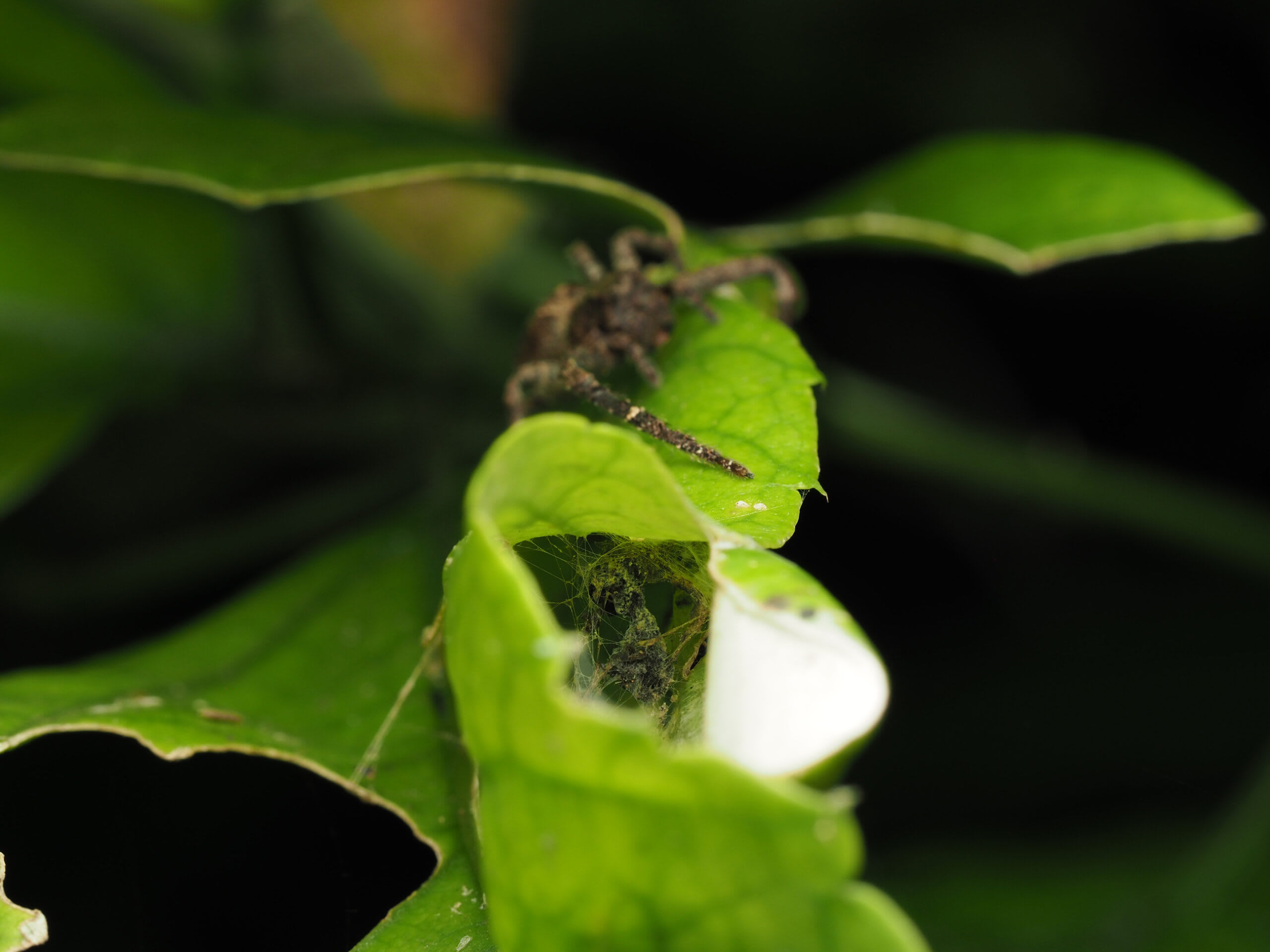 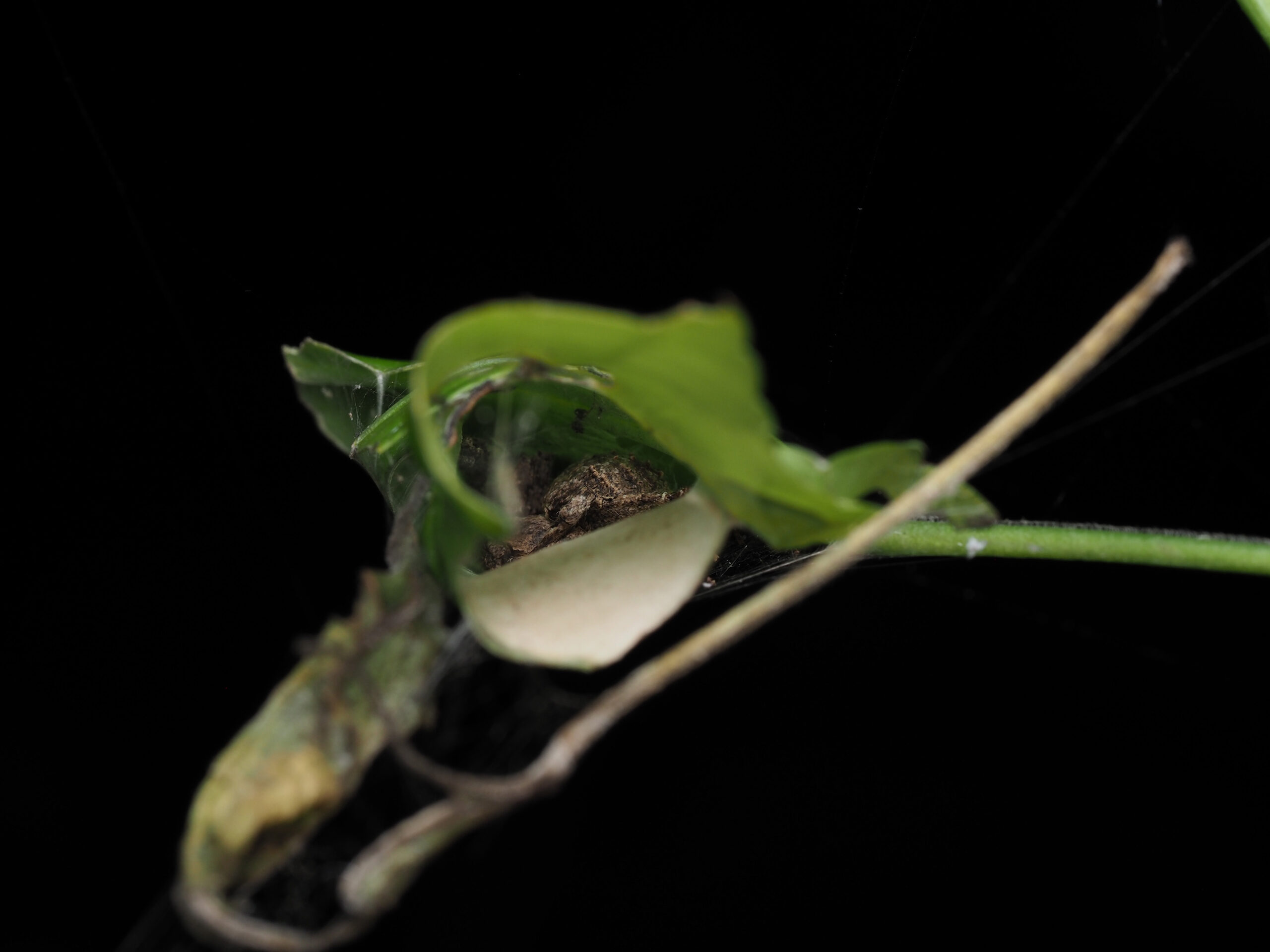 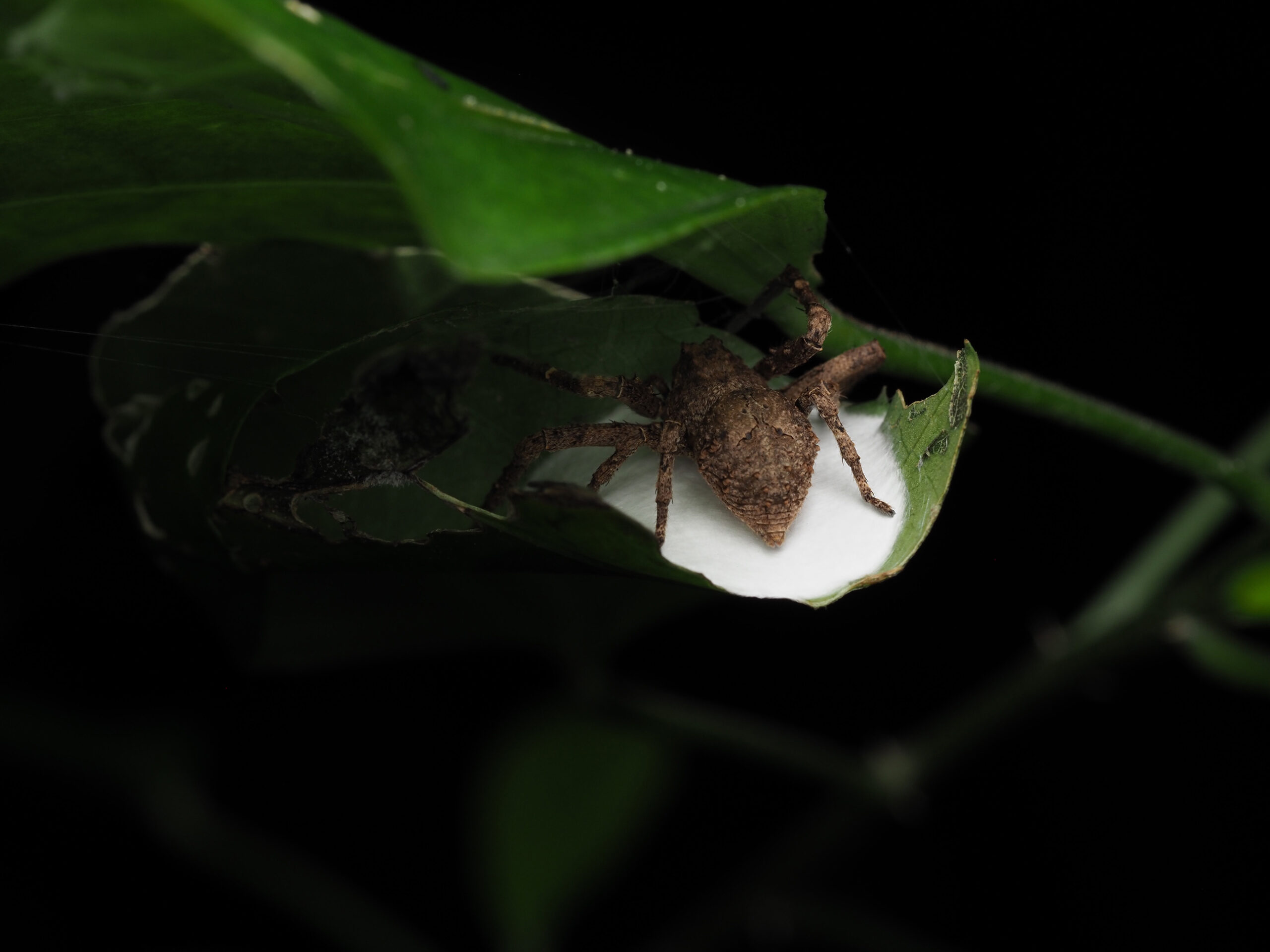 Crab spiders are commonly known to coil up leaves and use them as safe spaces for their egg sacs. The resourceful Angaeus in Dr Abhijith’s farm managed to upcycle four abandoned leaf rolls of the cotton leaf roller moth into container homes for its egg sacs. Interestingly, she set up all four egg sacs in rolled leaves of a hibiscus plant. The only other published record of brood care by this genus exists in a general article titled “The Legs That Rock the Cradle” by Vinayak Patil published in the science education journal Resonance. Patil photo-documented an Angaeus pentagonalis sitting on an egg sac that she had woven onto a dried leaf. The dried leaf was attached to the leaf of a Bengal currant shrub (Carissa carandas). A laborious set-up compared to the cleverly upcycled nesting site of the Angaeus in Dr Abhijith’s farm. 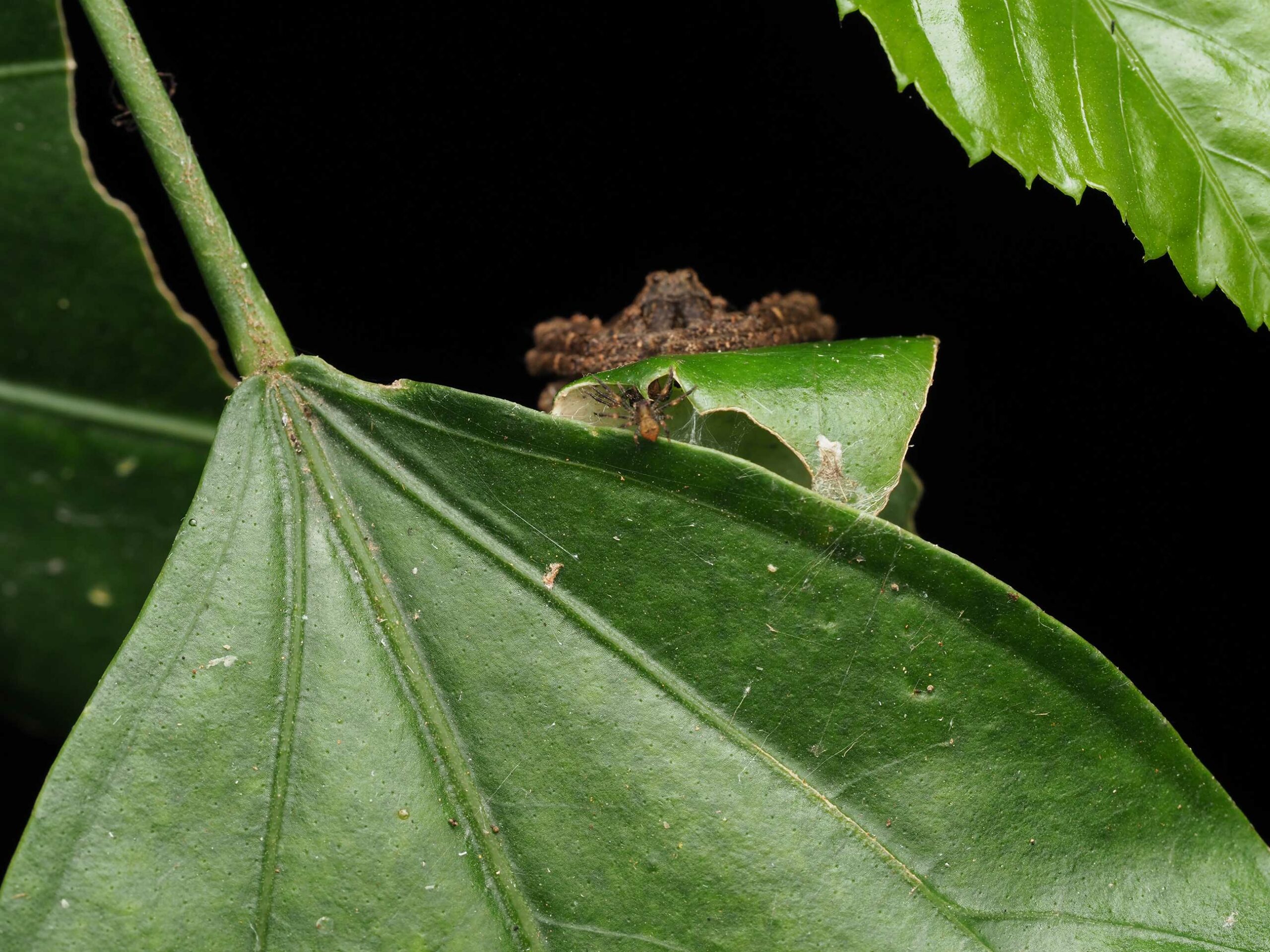 After two months of spending time in each other’s company, Dr Abhijith and the eight-legged mother shared a magical sight. With Dr Abhijith perched behind his camera and the mother Angaeus perched on a leaf nearby (top), they watched as tiny little crab spiders emerged from an egg sac (above). These moments pave new paths for further scientific inquiry. For example, a large enough sample of consistently documented breeding and hatching cycles of a species could provide insights into the spider’s breeding seasonality. This will open its own pandora’s box of scientific questions: Why does this species breed when it does? Does it have something to do with the rain? Thunder clouds, perhaps? Does this spider mate in the winter because it is “cuddle weather”? 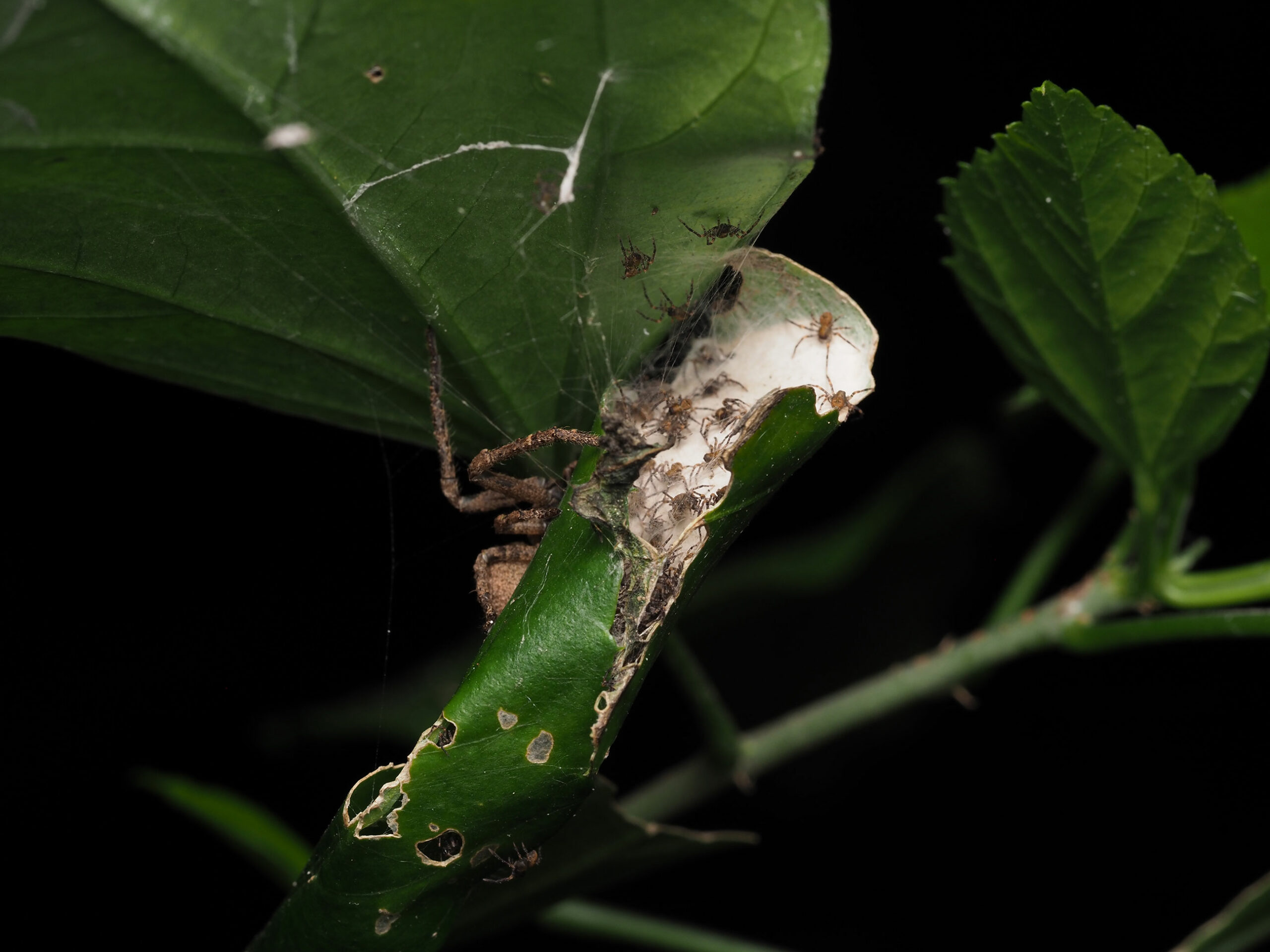 These inspiring images may be some of the first peeks into the life history of this poorly studied genus of spiders in its natural habitat. With the growing interest in observing life in all its shapes and sizes, passionate enthusiasts like Dr Abhijith become sources of invaluable accounts of natural history. To witness incredible moments in nature like this, I recommend a few simple must-haves before setting out to buy a fancy macro lens — curiosity for the unknown, empathy for the unfamiliar, and fascination for what some might deem unremarkable. 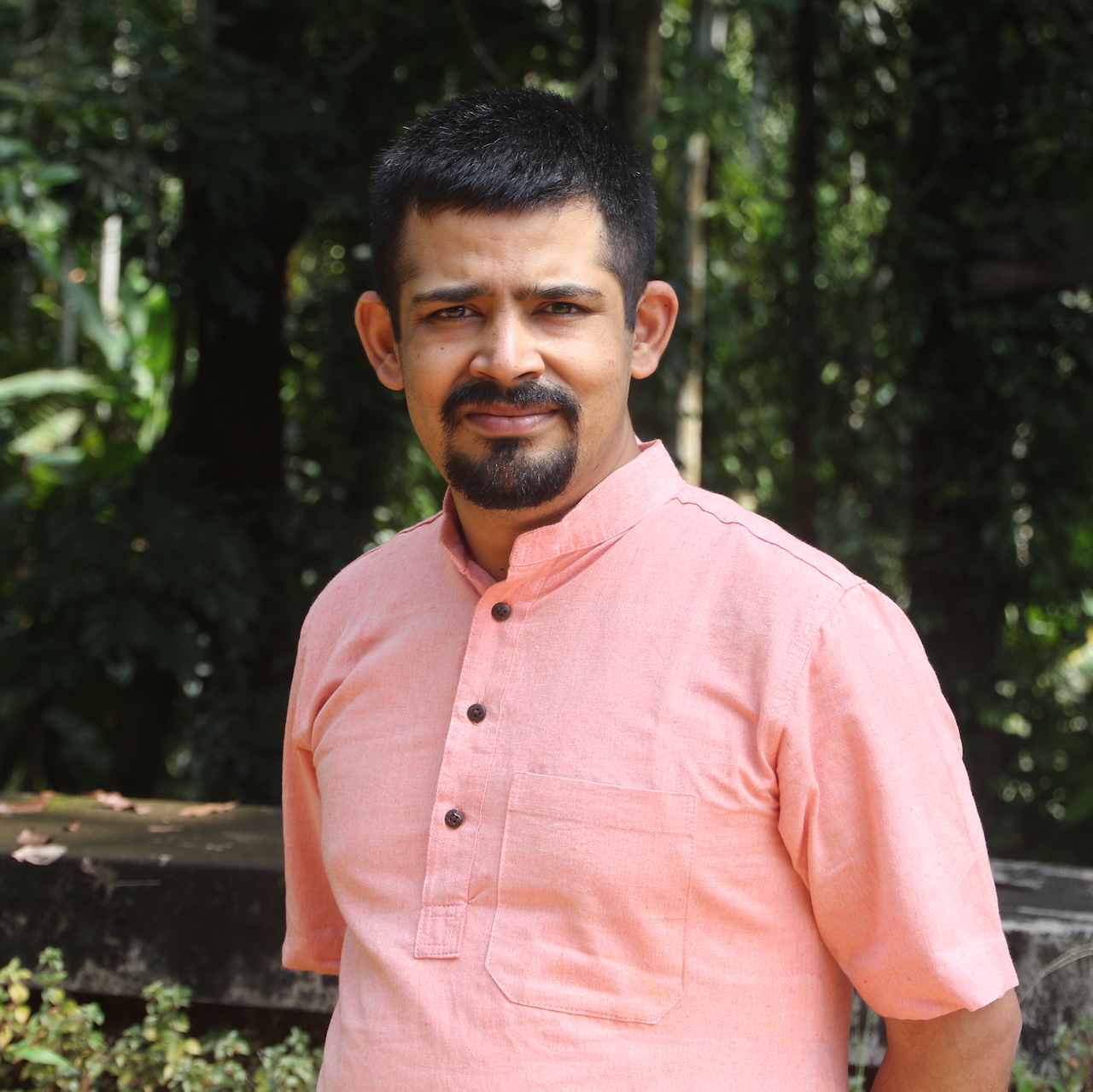 is the founder of TEAM SAALIGA, a group of spider enthusiasts in Karnataka. He is also a homeopathic doctor and runs a 10-acre organic farm.