Dibru-Saikhowa National Park is home to some of the rarest and most threatened birds, but the unique landscape needs immediate attention 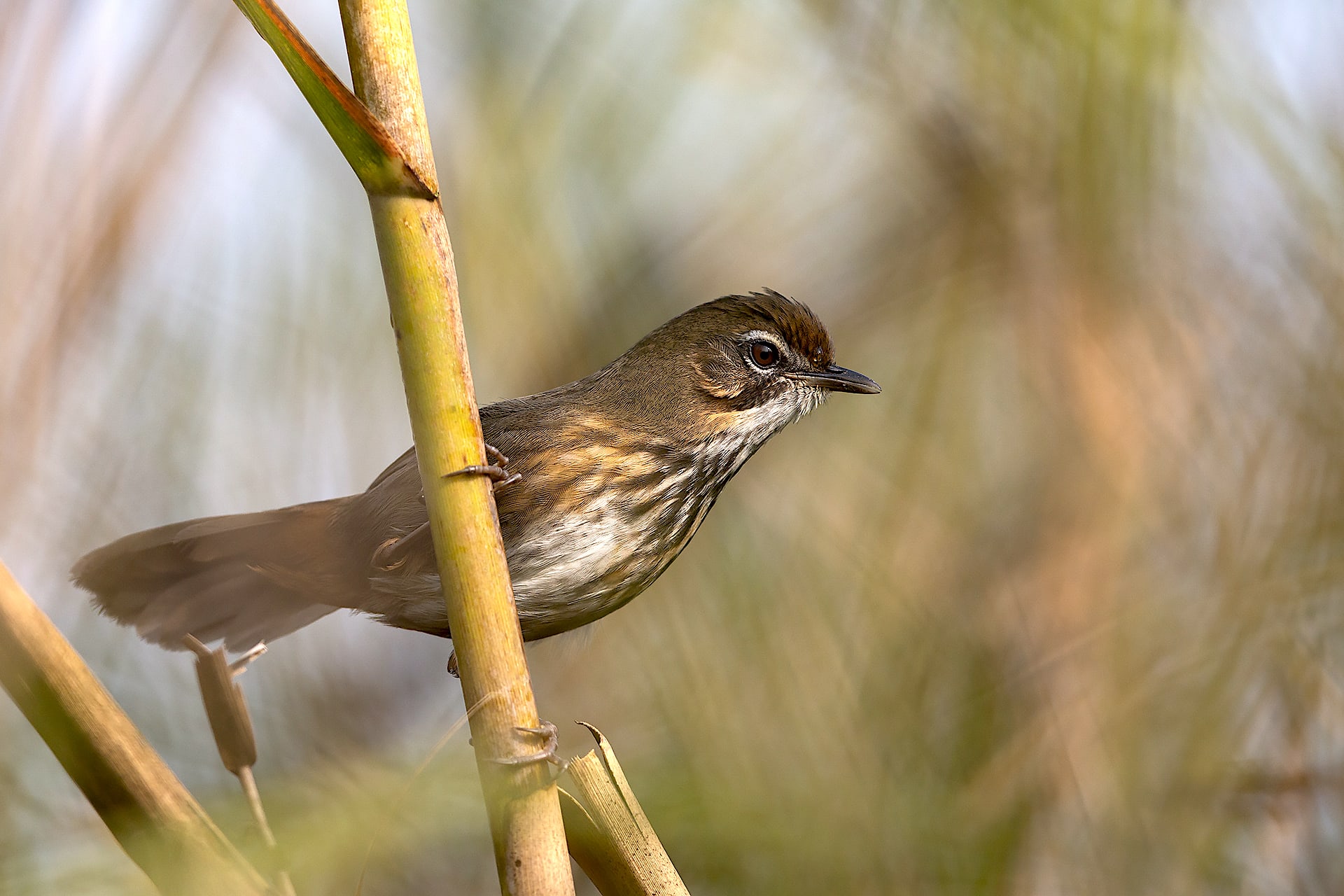 A quick glance at Assam’s map reveals the unique landscape of Dibru-Saikhowa National Park (DSNP). Hemmed by rivers Brahmaputra, and Dibru and Lohit, this national park rises like an island. The constantly changing course of these rivers, deposits high amount of silt and forms small chaporis, or river islands, around the national park. The park’s main island is also dotted by perennial beels, or freshwater ponds. Together they become a part of the dynamic Brahmaputra floodplains.

Assam’s DSNP covers an area of 340 sq. kms in the Tinsukia and Dibrugarh districts. In 1950, an impactful earthquake sank the naturally occurring tropical rainforests in the park, paving the way for the existing deciduous forests and swamps. Today, Dibru-Saikhowa has the largest salix swamp forest — a jungle of deciduous trees and shrubs that grow in moist soils — in Northeast India.

The park is surrounded by a buffer zone (425 sq. kms) that forms the Dibru-Saikhowa Biosphere Reserve (DSBP). The biosphere reserve accommodates several chaporis and beels that add to the ecological wealth of the landscape. Amarpur chapori, that lies to the north of the national park has grasslands, that are inundated during the monsoons. The grass here grows up to 3-4 metres tall. The Maguri-Motapung beel lies to the south of the park. This wetland is home to around 110 bird species, of which eight are listed as ‘Threatened’ in the IUCN Red List, and 84 species of fish, including the rare golden mahseer.

This mosaic of dry and wet grasslands, wetlands and swamp forests creates an ideal haven for numerous birds. Many, such as the endangered white-winged duck (Cairina scutulata), Bengal florican (Houbaropsis bengalensis), and swamp grass babbler (Laticilla cinerascens), are reported from here. “The entire area is very important for the conservation of grassland species,” says ornithologist Shashank Dalvi. 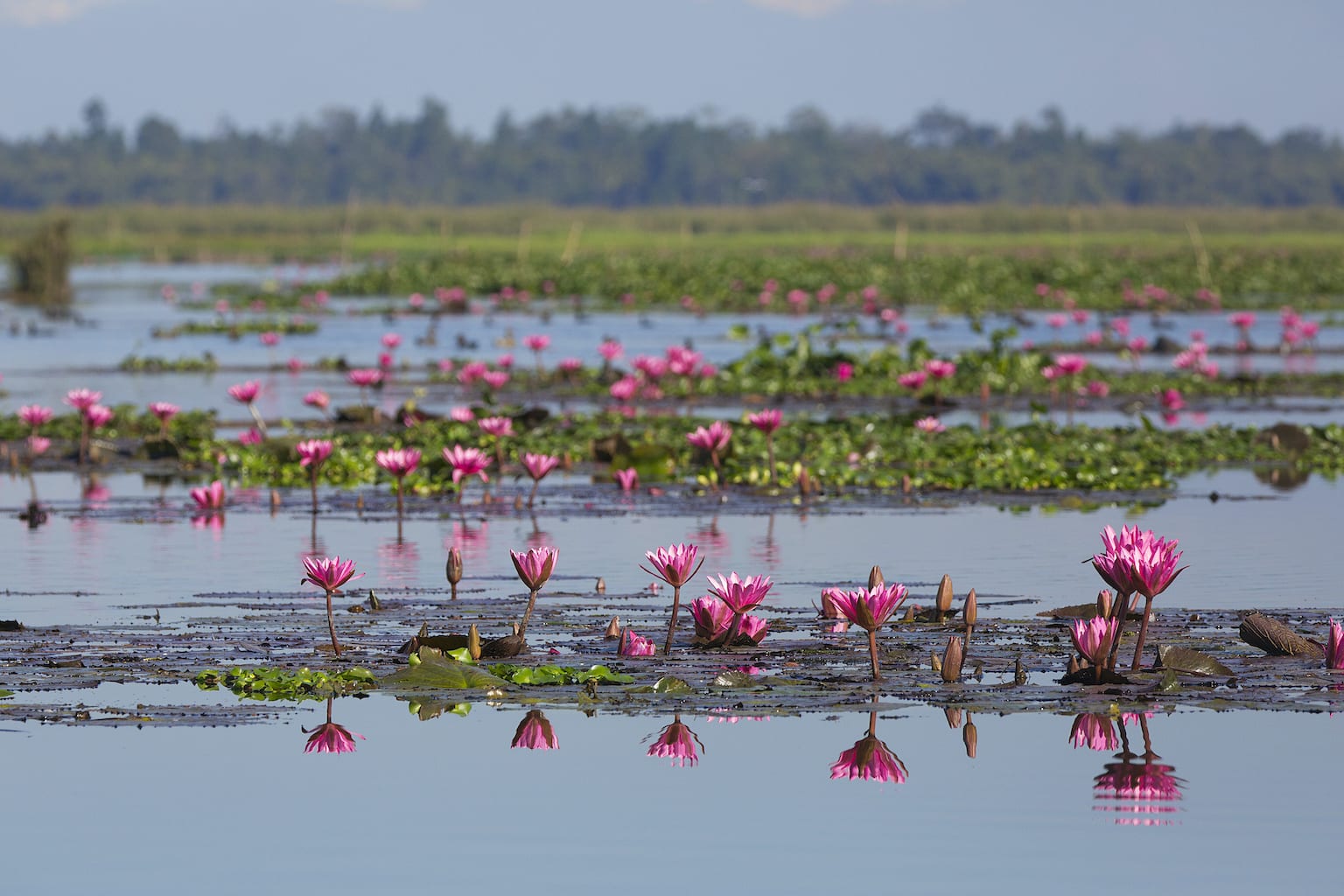 The Brahmaputra floodplains receive water through the year. In summer, the snow-capped mountains of the Tibetan plateau, where the river originates, melt to feed the river. Monsoons here are long and abundant, enough for water to last through winter. This creates a suitable habitat for migratory birds who travel to spend their winter in the floodplains as well as for resident birds who breed here through the year. Photo: Mayank Soni 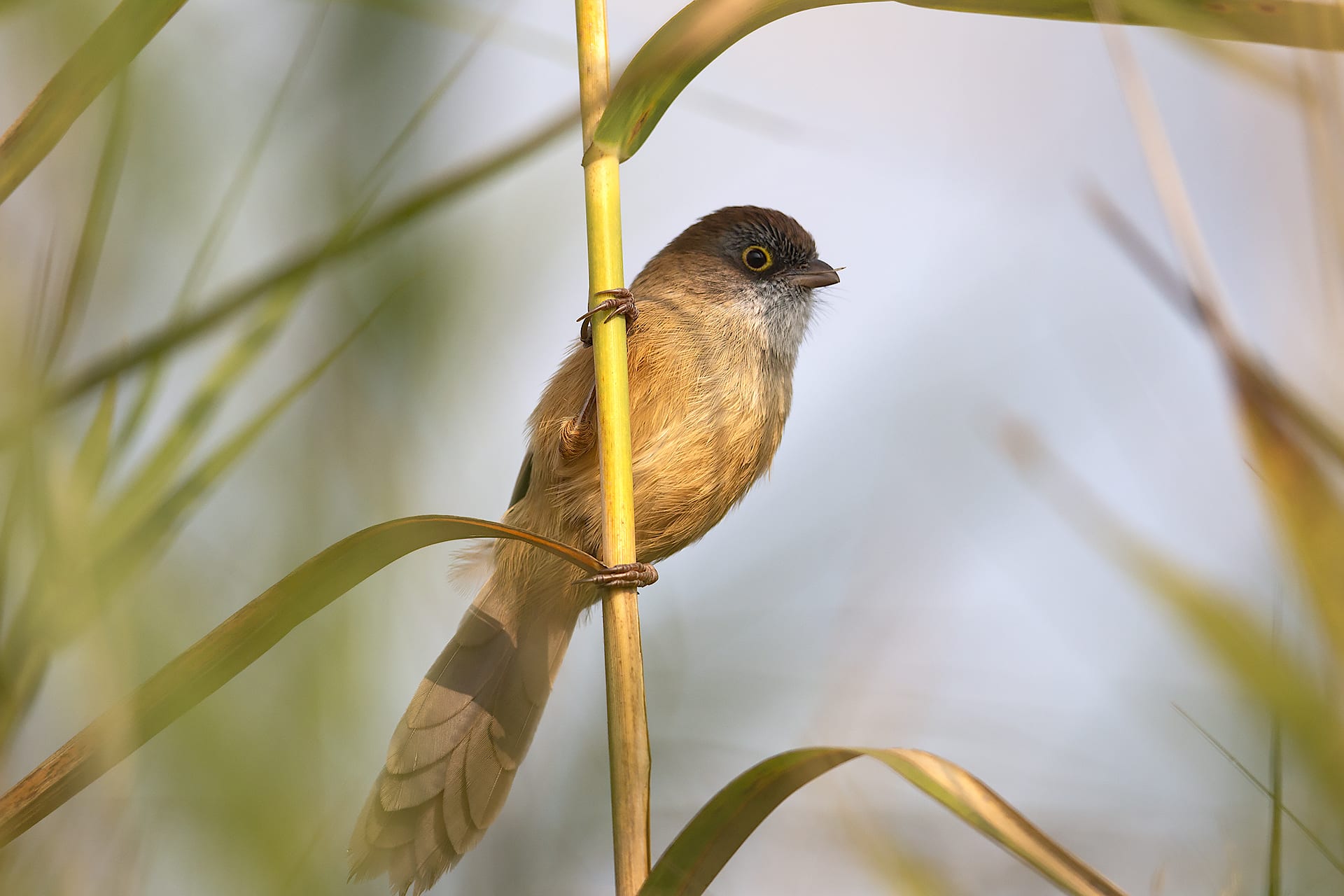 The ‘Vulnerable’ Jerdon’s babbler (Chrysomma altirostre) (left) inhabits tall and dense grasses, staying at a comfortable distance from the water. It enjoys perching at a height, away from lower growths and semi-open habitats. On the other hand, the endemic, marsh babbler (Pellorneum palustre) (right), skitters through tall grass and reedbeds, flies around stout trees and struts on the swampy grounds. Even though both resident birds are grassland specialists, the difference in their habitat requirements highlight the uniqueness of area. “I can think of only the Assam plains and Keibul Lamjao National Park in Manipur where both these birds are found,” adds Dalvi. Photos: Rofikul Islam 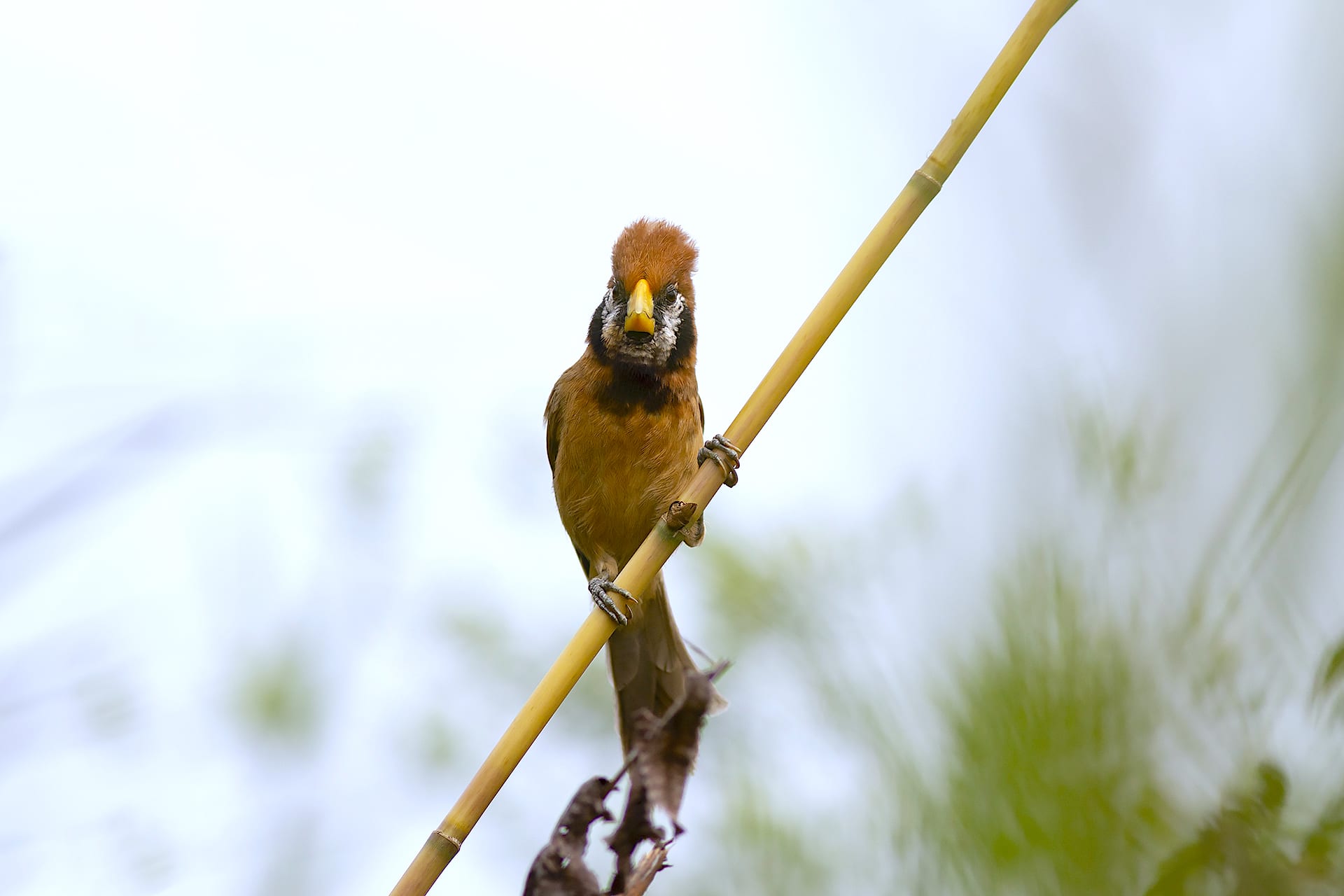 The black-breasted parrotbill (Paradoxornis flavirostris) is an elusive bird endemic to the Northeast plains and prefers staying hidden behind tall elephant grasses (Arundo donax) and reeds (Phragmites karka). In Assam, apart from DSNP, this bird is also seen in Kaziranga National Park, Manas National Park, Orang National Park and many chaporis. It is listed as ‘Vulnerable’ on the IUCN Red List. Photo: Rofikul Islam

Previously identified as swamp prinia, the swamp grass babbler (Laticilla cinerascens) is one of the most threatened birds of the landscape. It is shy and hides in deep beds of tall grasses, especially elephant grasses. Often the only way to notice its presence is by its chirpy, melodious song. Photo: Rofikul Islam 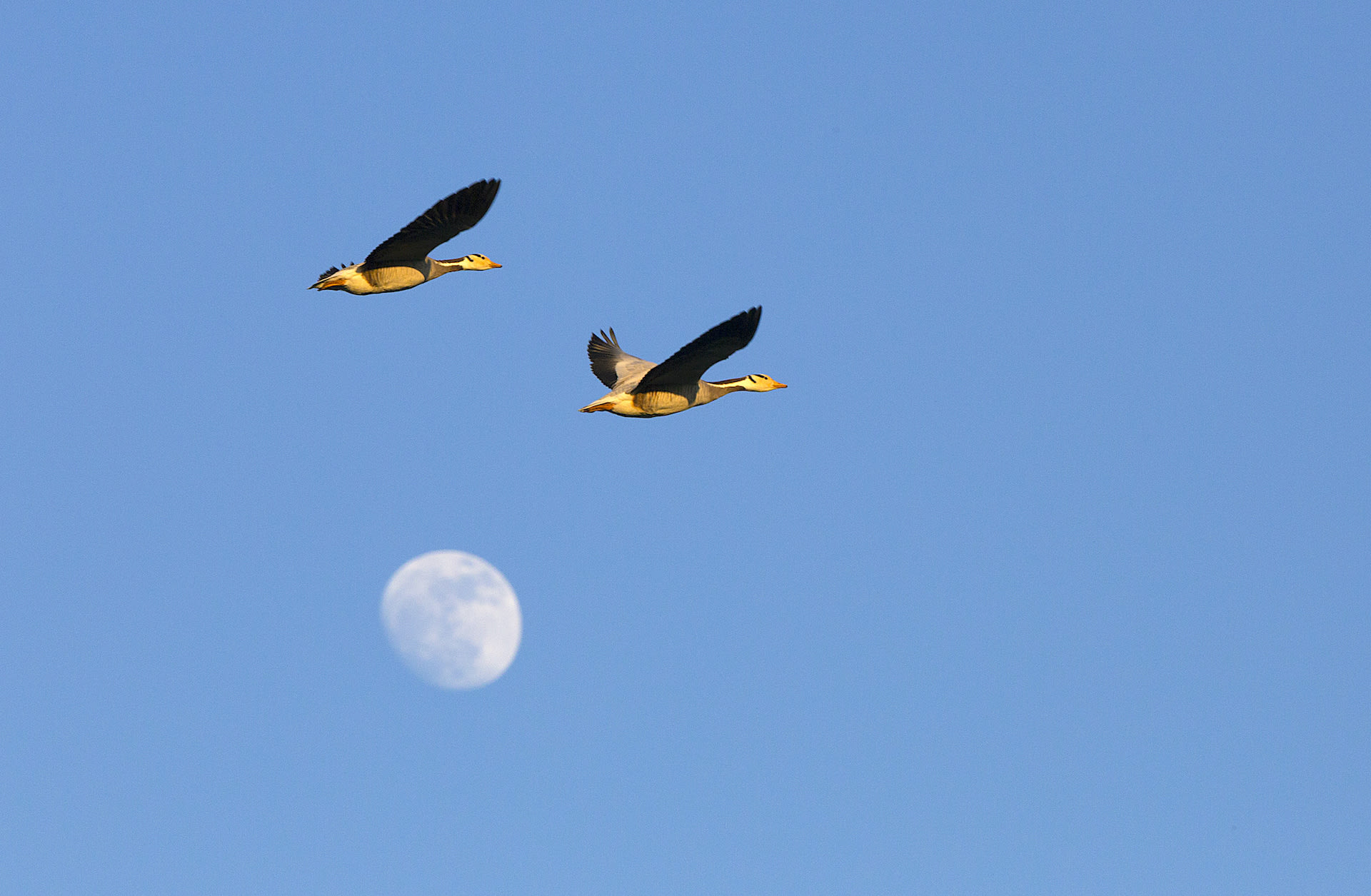 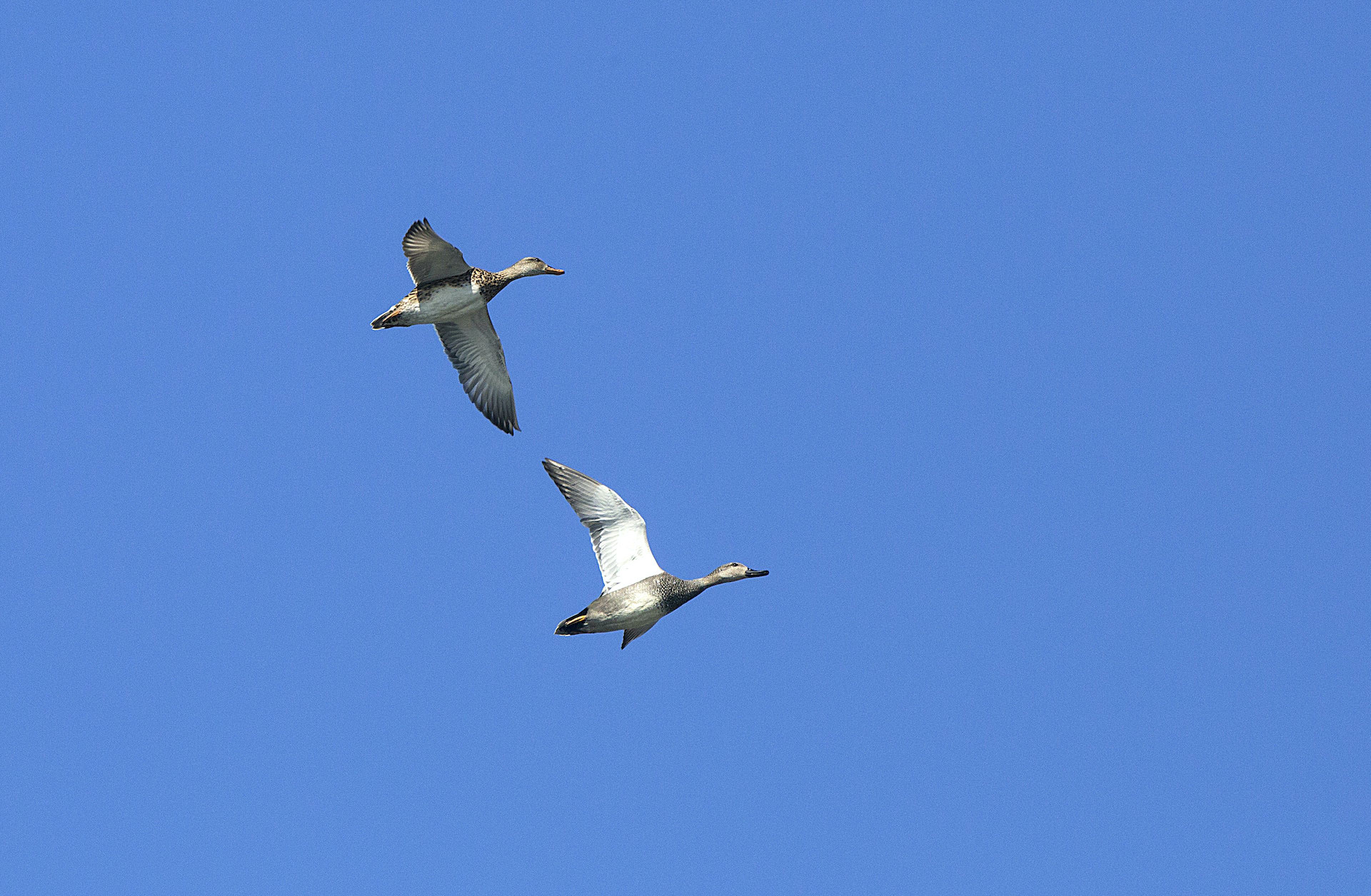 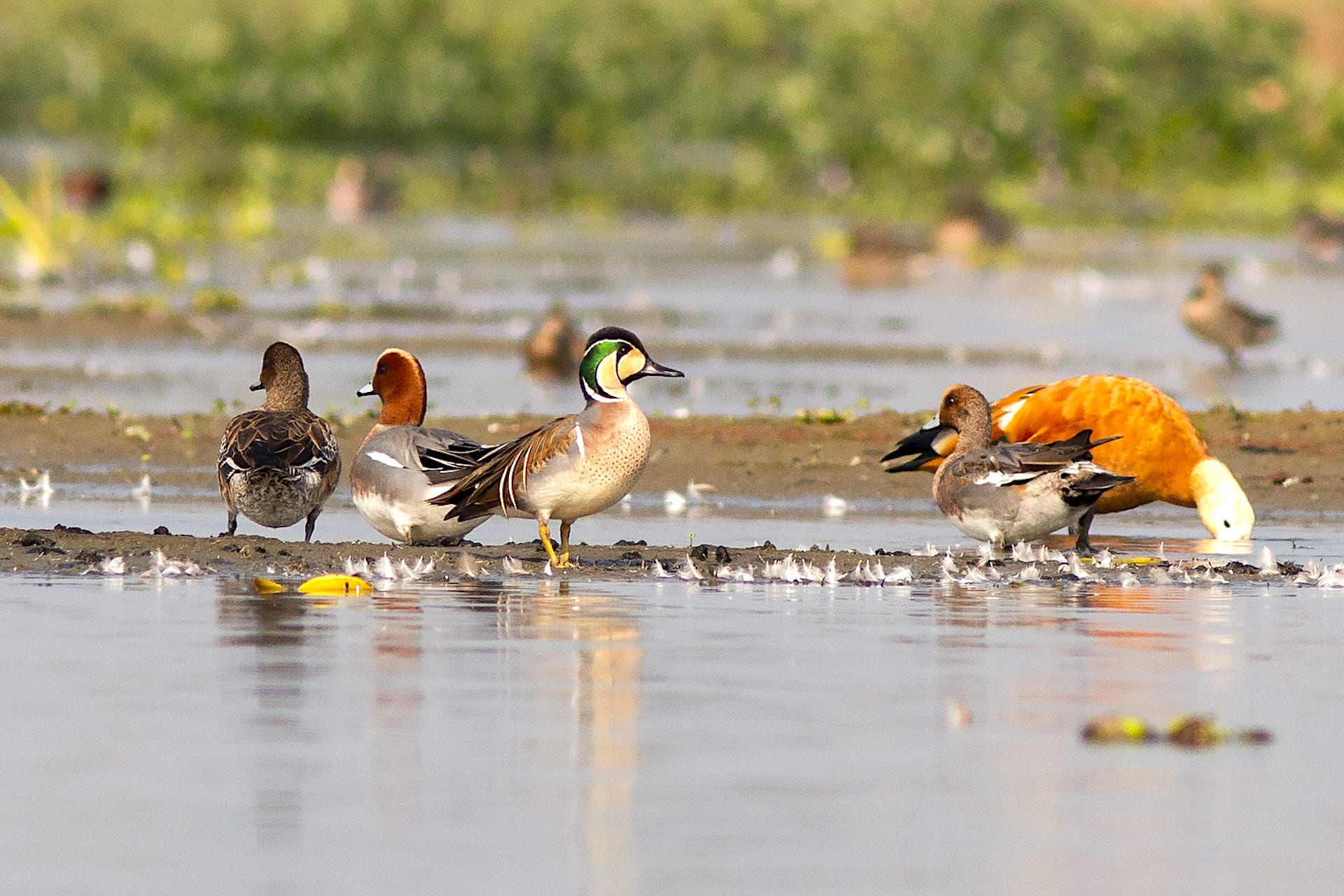 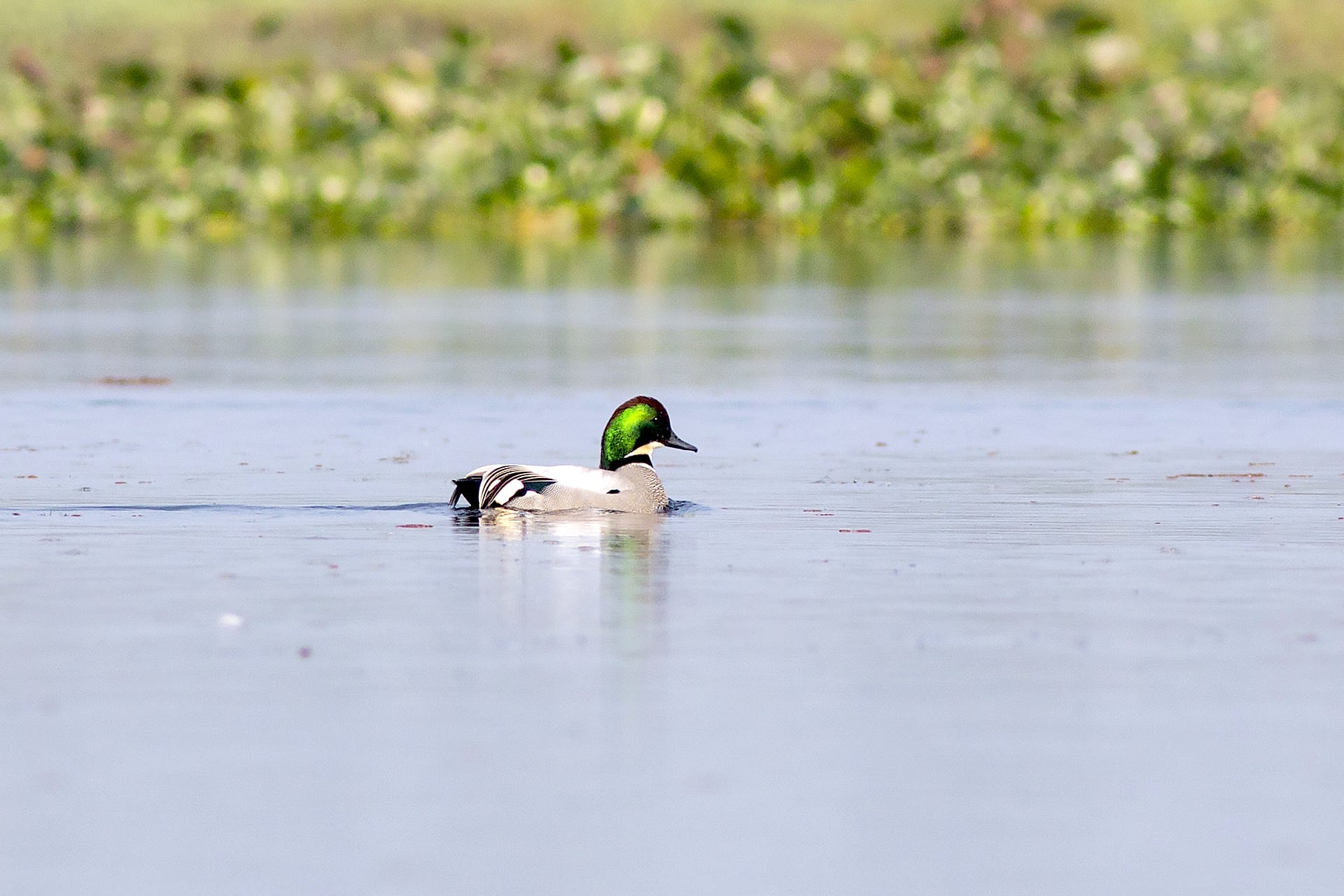 Dibru-Saikhowa falls in two international flyways for migratory birds: Central Asian Flyway and Asian-Australian Flyway. According to Anwaruddin Choudhury’s 2006 report, Birds of Dibru-Saikhowa National Park and Biosphere Reserve, 218 resident birds and 173 migrants are found here. The latter includes 156 winter visitors, among which the bar-headed geese (Anser indicus) (top left) is a popular migrant. The geese have been reported to fly above 9,000 metres altitude (Mt Everest is 8848 metres) when they migrate from Central Asia. Waterbirds including geese, shelduck, storks, are regular visitors too. The greylag geese (Anser anser) (top right) breeds in Central Asia and Eastern Europe, whereas the falcated duck (Mareca falcata) (above right) flies in from east Siberia-Mongolia. The beautifully patterned, Baikal teal (Sibirionetta formosa) (above left) is a popular open waterbody migrant from Russia, that uses this floodplain as its wintering grounds. It is easy to differentiate between the male and female of this species. During the breeding season, the male wears a dark crown and has pink spots and white vertical stripes on the breast. The female is dull brown in colour. Photos: Mayank Soni (top), Rofikul Islam (above) 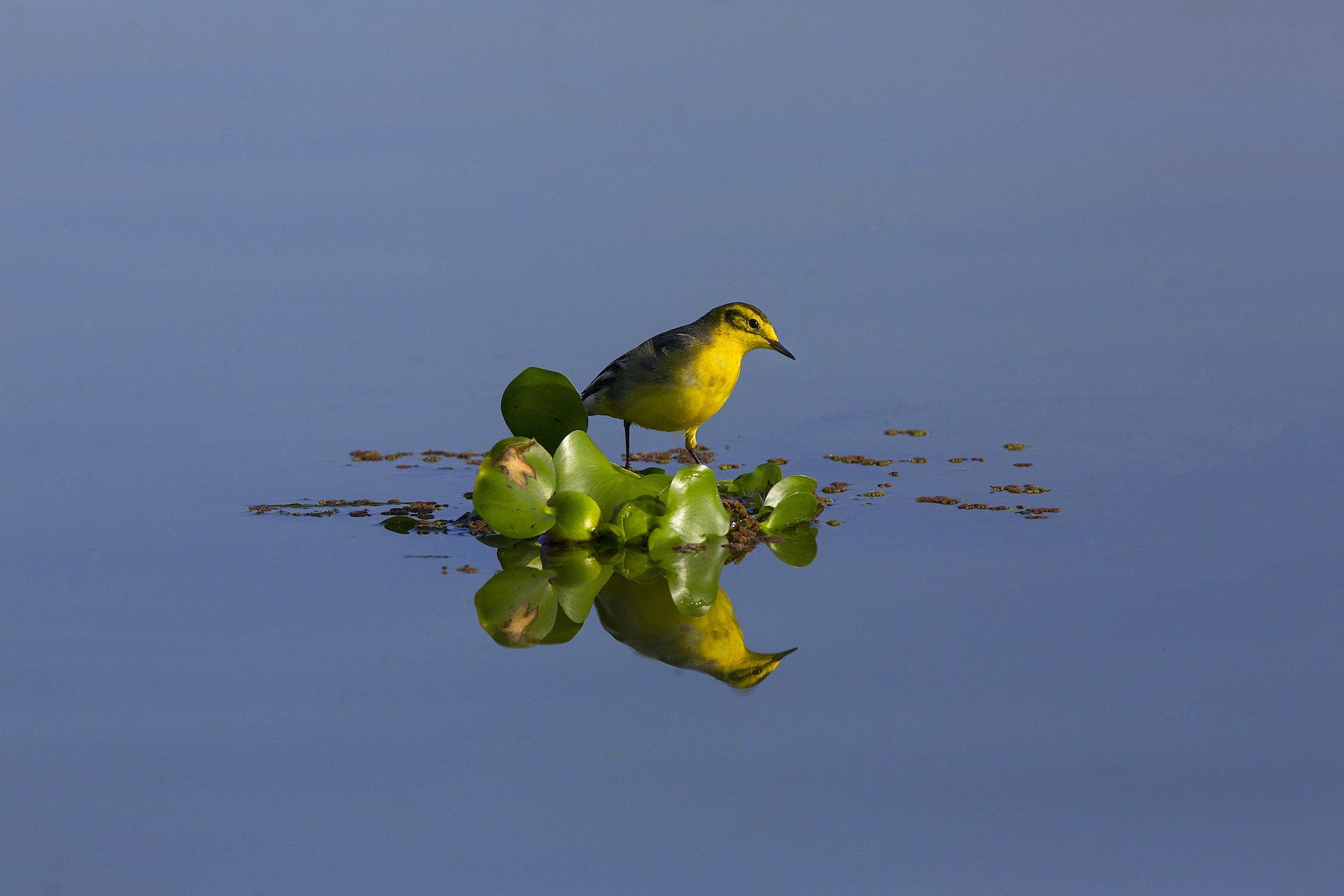 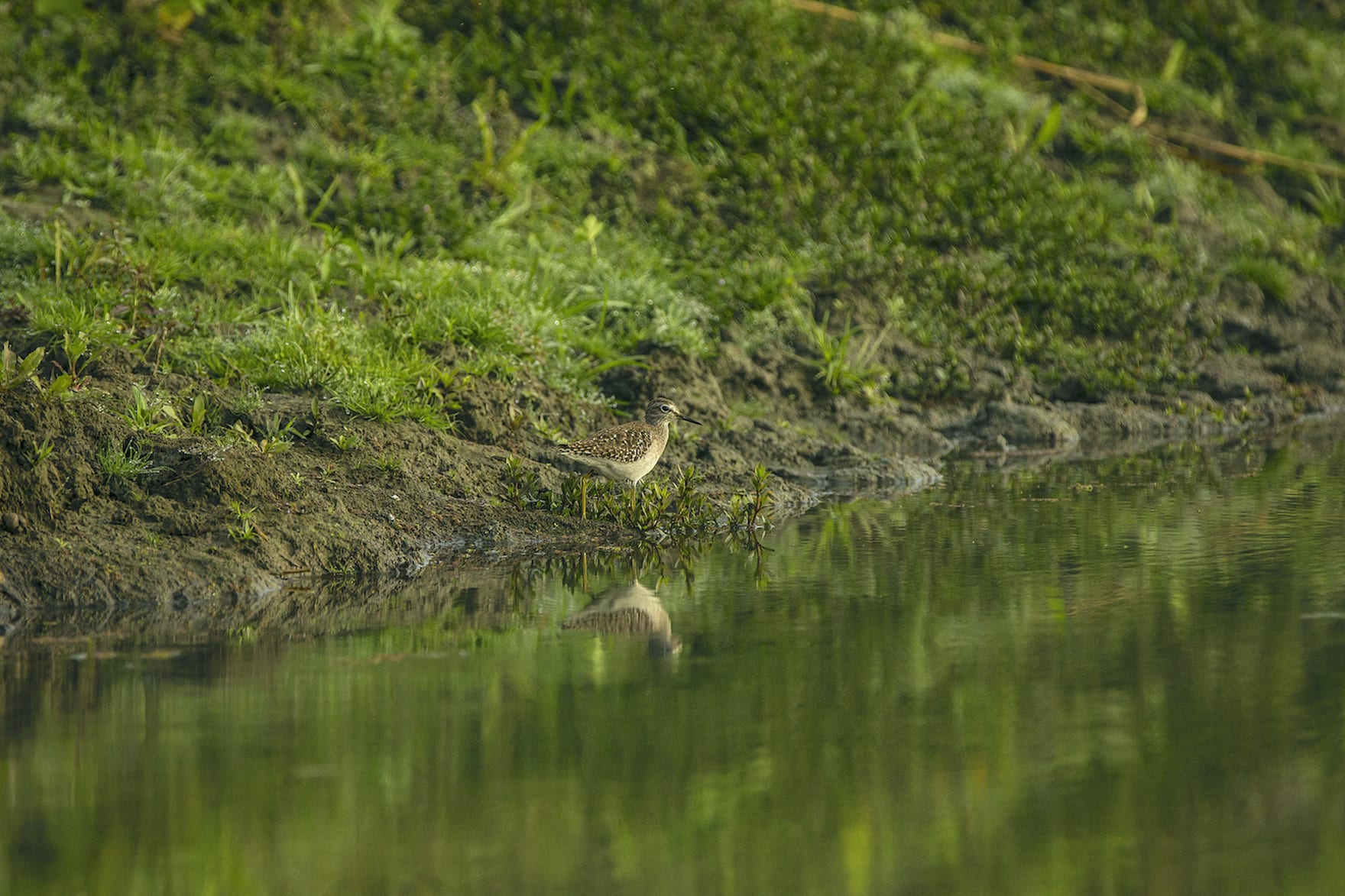 The citrine wagtail (Motacilla citreola) (left) and the wood sandpiper (Tringa glareola) (right) are winter visitors here. The latter’s tall slender legs, and a long bill helps it forage in water, sand and mud. Both their diet relies heavily on a variety of invertebrates such as worms, crustaceans, small arthropods and their larvae, which are found in and around aquatic bodies. Hence, reinforcing the requirement of such grassy beels. Photos: Mayank Soni

Dibru-Saikhowa is surrounded by villages, which results in constant interaction between humans and the fragile habitat. Agricultural practices, grass harvesting, burning grass for maintenance, fires, and livestock grazing pose a threat to the birdlife here. Livestock grazing in these grasslands, especially, has resulted in cattle trampling over birds’ nests and eggs. For instance, the swamp francolins (Francolinus gularis) (above) are ground-dwelling partridges that are found in tall wet grasslands and wet agricultural fields. The growing human interaction with the landscape is not the only threat to the biosphere reserve. The forest department routinely burns grass to make room for fresh growth, which is consumed by large mammals. This practice damages the nests of ground-dwelling birds. “We need to rethink this practice. Perhaps doing a quick check of whether burning a certain patch is necessary, and are there any birds breeding in it, are good points to consider,” suggests Dalvi. Photos: Mayank Soni (top), Rofikul Islam (above) 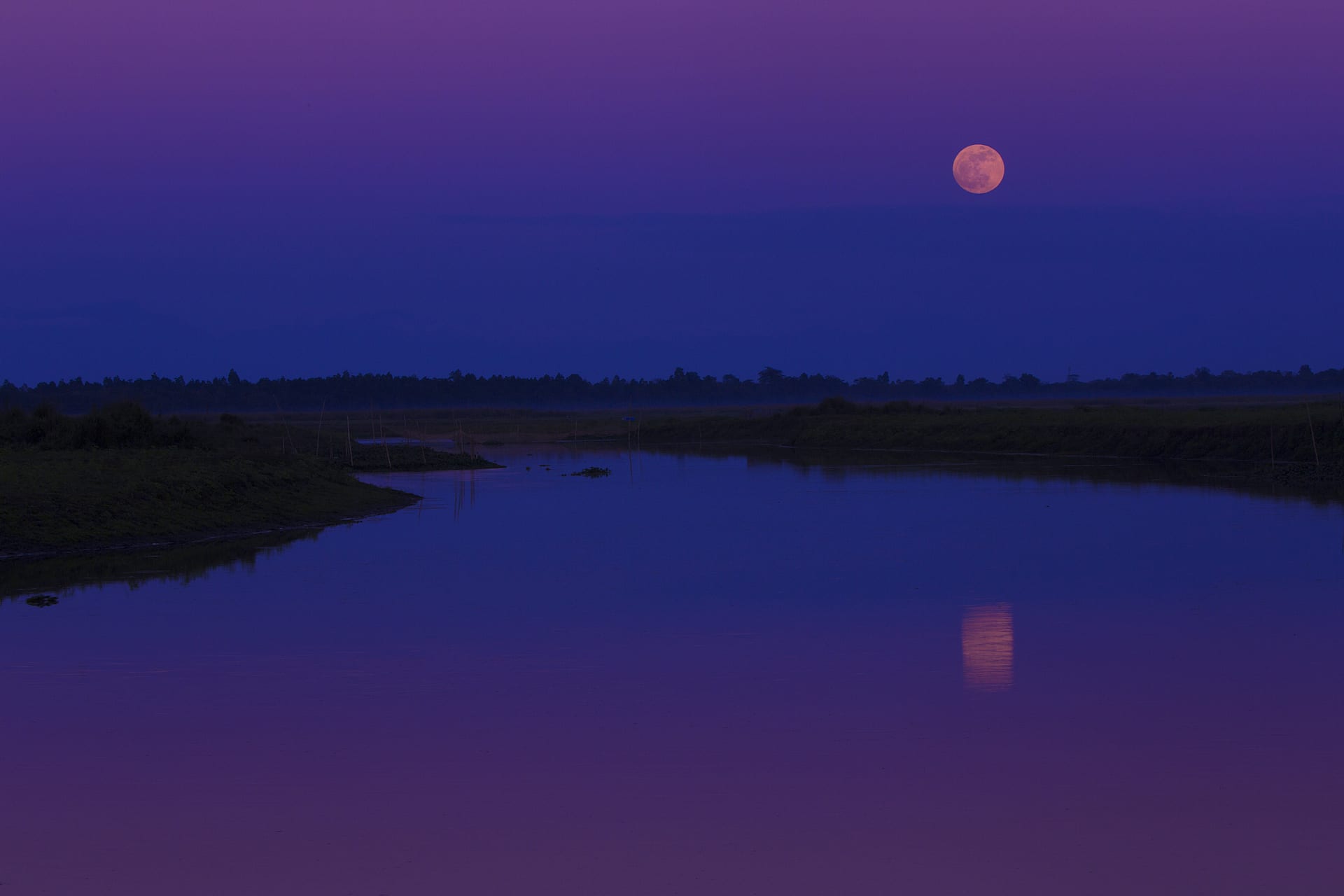 The protected areas in Northeast India are small in size, in comparison to other parts of India. This coupled with the fact that there are very few dynamic grasslands like the Brahmaputra floodplains remaining in India, makes this a threatened habitat. In May 2020, an oil well in the nearby Baghjan village blew up, marking the beginning of a 159-day fire and 172 days of gas leak into the adjacent Maguri-Motapung beel. The Dibru-Saikhowa National Park is a little more than a kilometre from the site. Locals say that most migratory birds have given this wetland a miss in the winter of 2020. The unprecedented number of hydroelectric projects on river Brahmaputra invite unforeseen threats for wildlife here and the habitat at large. More dams mean more control of river water. A sudden release of dam water may result in sudden floods. On days the water is stored in the reservoir, there may be dearth of water in the wetlands — which is essential for both resident and migratory birds. Unthoughtful development is disturbing the very foundation of this delicate ecosystem. Photo: Mayank Soni 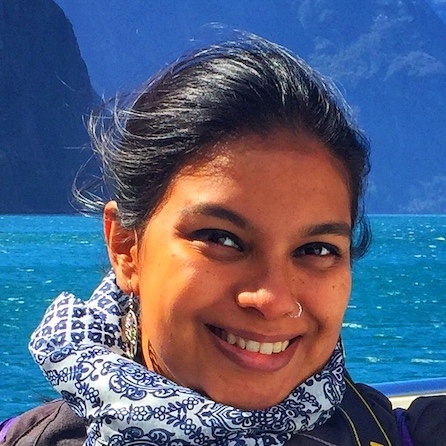 Jack of all Tastes: The Versatile Golden Jackal