Of all the species of wildfowl recorded in India, just a handful are resident birds. The rest are winter migrants, mostly flying in from their breeding grounds in Central Asia and Siberia. Here’s a look at some of these charming birds 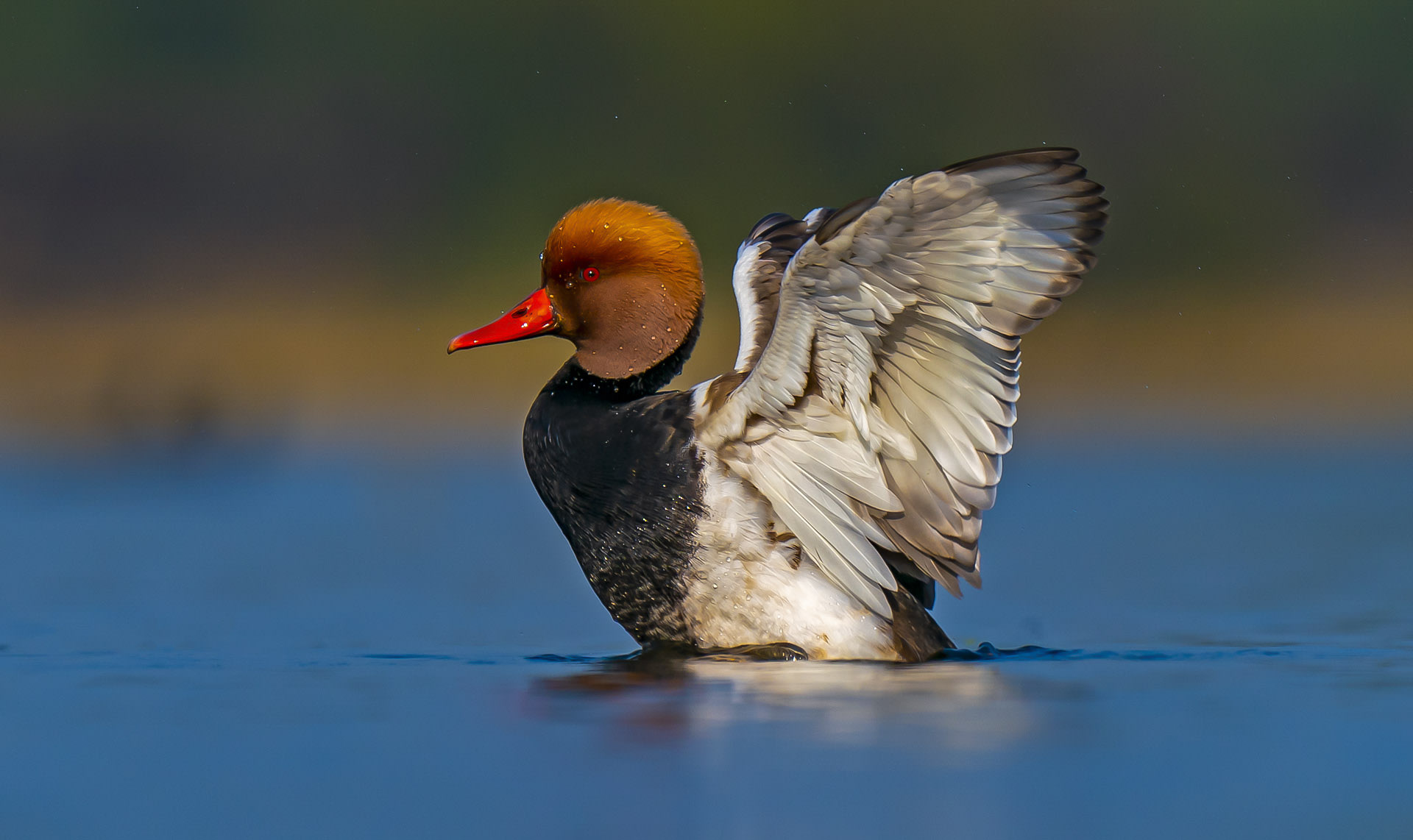 It’s an experience you’re not likely to forget in a hurry. There you are tramping along the shore of a lake or jheel on a winter morning when from high in the clear blue sky, you hear “whizzooom! whizzooom! whizzoooom!” It sounds like a squadron of fighter jets streaking overhead. They are tiny black specks in formation, zooming over and then banking around.

Then suddenly, they look as if they’ve been attacked en masse as they begin to tumble out of the sky, somersaulting downwards, apparently out of control, heading for the water. Just metres above, they suddenly regain control, arching their backs gracefully, tails and wings flared, braking to a thistle-light touchdown on the water. They bob around, wagging their tails as if in approval of a job well done, murmuring to one another. Here they will spend the winter, snoozing, snacking, and sleeping-in late — heads tucked into their bodies.

Of the 30-40 species of wildfowl (ducks, geese, and swans) that have been recorded in India, just a handful — about half a dozen — are resident birds. Some, like the pink-headed duck (Rhodonessa caryophyllacea), with its candy-floss head and brown body, have been deemed extinct (last seen in 1935). Others, like the white-winged wood duck (Asarcornsis scutulata), are very rare (found in jungle ponds in Assam). And yet others, like the “vagrant” ultra-glamorous Mandarin duck (Aix galericulata), thrill birders by making a rare appearance (such as in February 2021) in Tinsukia, Assam.

Ducks are divided into various categories. There are the dipping ducks or dabblers, which upend (submerge head to feed) in the water and filter food particles from the surface. Diving ducks like pochards are heavier-boned and squat and dive down to the bottom and get their food. Tree ducks, like the nakta (Sarkidiornis melanotos), nest in holes and hollows in tree trunks. Shelducks, like the raw-silk clad Brahminy duck (aka ruddy shelduck) (Tadorna ferruginea), are big goose-like ducks.

All ducks have flat beaks equipped with filtration plates and paddle-like feet set back on the body. They have a direct, swift flight pattern and a wacky motor-horn quack. Most face a barrage of guns from hunters and poachers when they fly over and settle in jheels, lakes, rivers, and other waterbodies all over the country — even some sanctuaries are not sacrosanct. Most of our winter migrants fly in from their breeding grounds in Central Asia and Siberia — as much as 8,000 km one-way. They arrive in on the Indian subcontinent by August and will stay on till April the following year. Let’s meet some of the more common residents and visitors to our freshwater bodies. 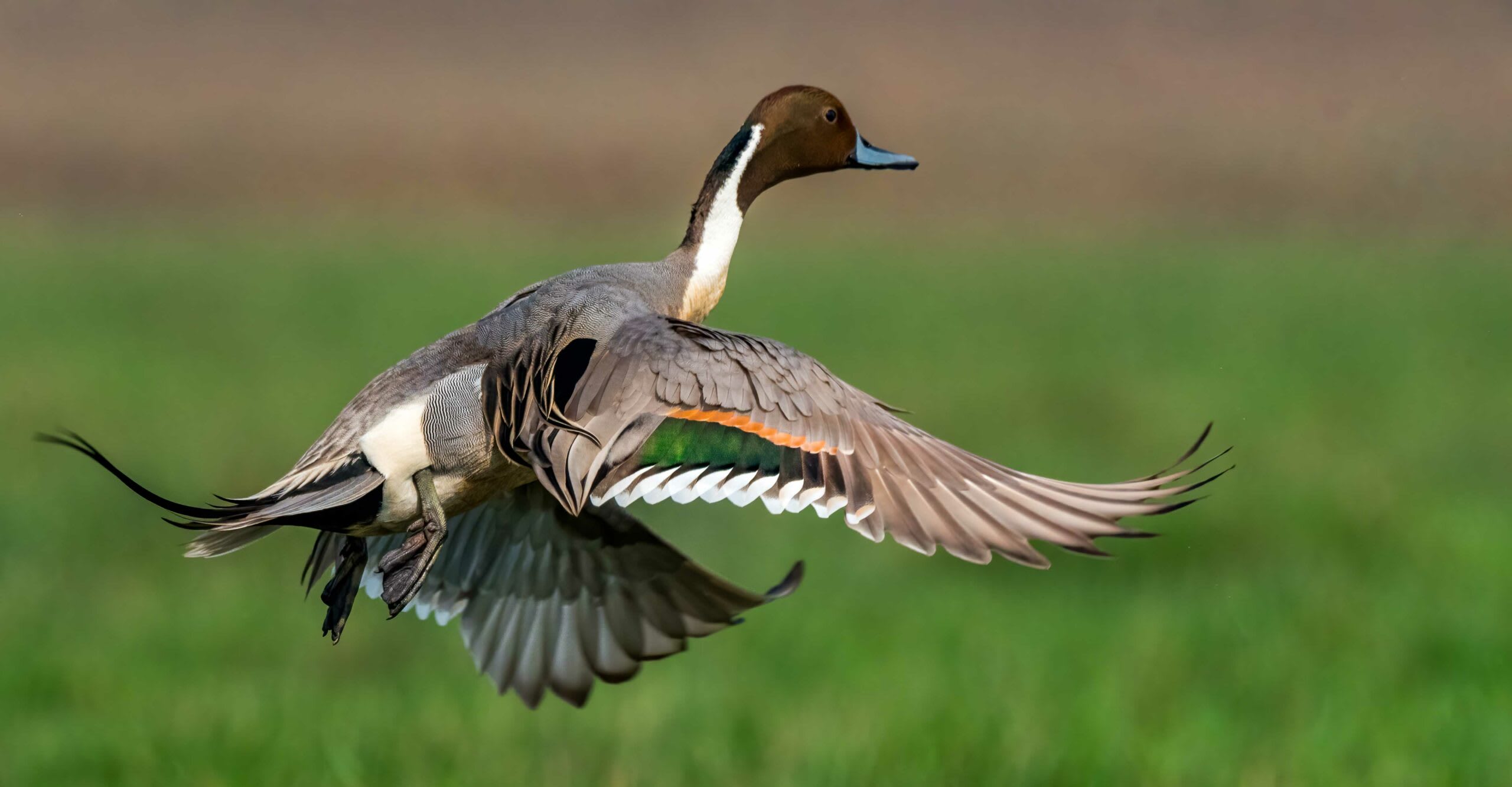 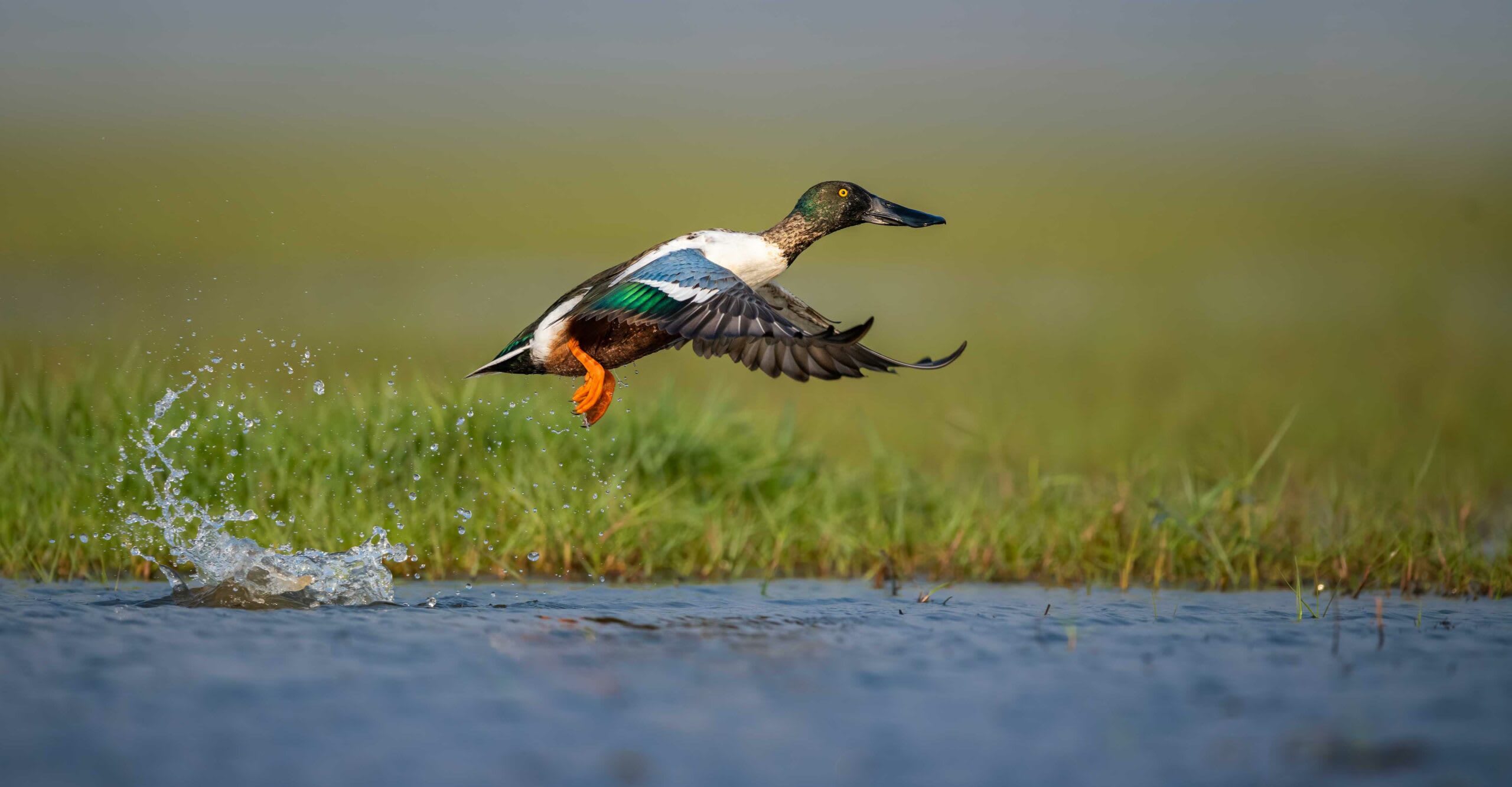 (Left) The northern pintail (Anas acuta) is one handsome dandy, clad in woven silver-grey, chocolate, and white, and an upright posture. It has a pair of sharp “pin” feathers sticking out of its tail. Its forewing is a lovely flame blue. The pintail is quite a contrast to the beady-eyed, low-floating northern shoveller (Anas clypeata) (right) with its flat, spatula-like bill, chestnut and white suit, and head that can turn from royal purple to emerald green depending on the angle of the light. Photos: Abhishek Das Cover photo: Red-crested pochard. Photo: Dhritiman Mukherjee 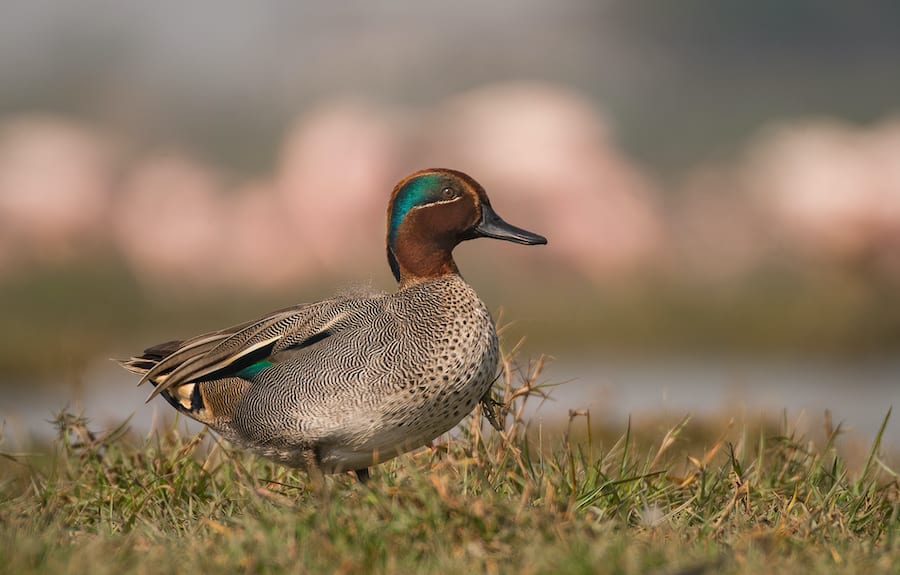 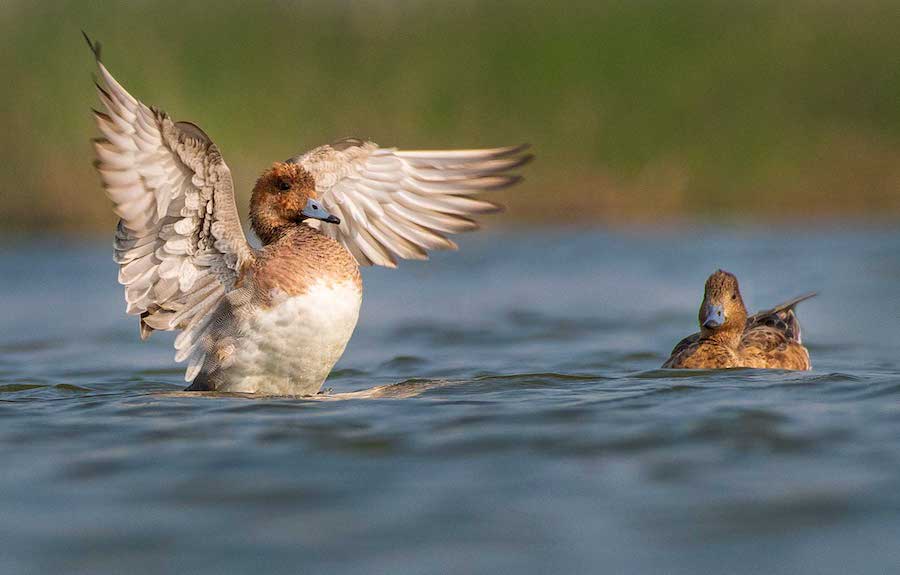 The shy common teal (Anas crecca) (left) with its woven greyish plumage is smaller than the pintail and shoveller, but wears a white-bordered costume-party green mask across its eyes; a contrast to its russet head. Then there’s the gadwall (Anas strepera), grey and dark brown with a coal-black patch near its tail. It is one of the most common of these dabblers, while the Eurasian wigeon (Anas penelope) (right), in silver-grey, russet and with a caramel crown and silvery pink breast is another snazzy duck. With dabbling ducks, all the ladies are dressed in speckled and splotched browns and blacks. Photos: Vipul Ramanuj (left), Neel Sureja (right) 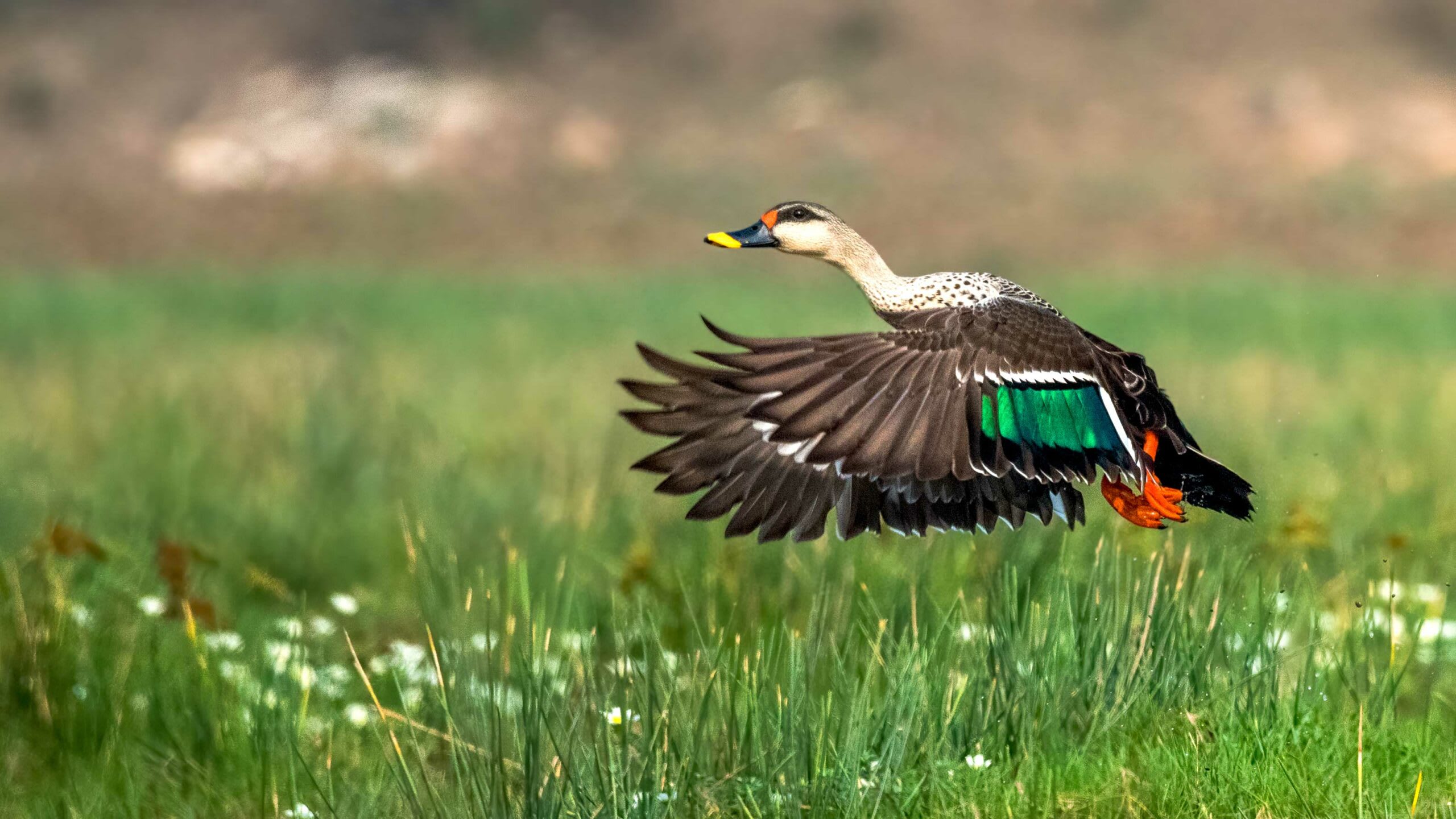 The spot-billed duck (Anas poecilorhyncha) is a resident bird, splotched in peppery brown, with film-starlet like eyes and a yellow-tipped bill. It wears two orange “bindis” at the base of its forehead. Both gentlemen and ladies are alike, and they breed during the monsoon. Gentlemen spot-billed ducks are not at their most chivalrous while courting. I’ve seen two or three testosterone-overdosed thugs violently pounce on and almost drown a poor girl they were chasing amidst much flailing of wings and desperate quacking. Photo: Abhishek Das 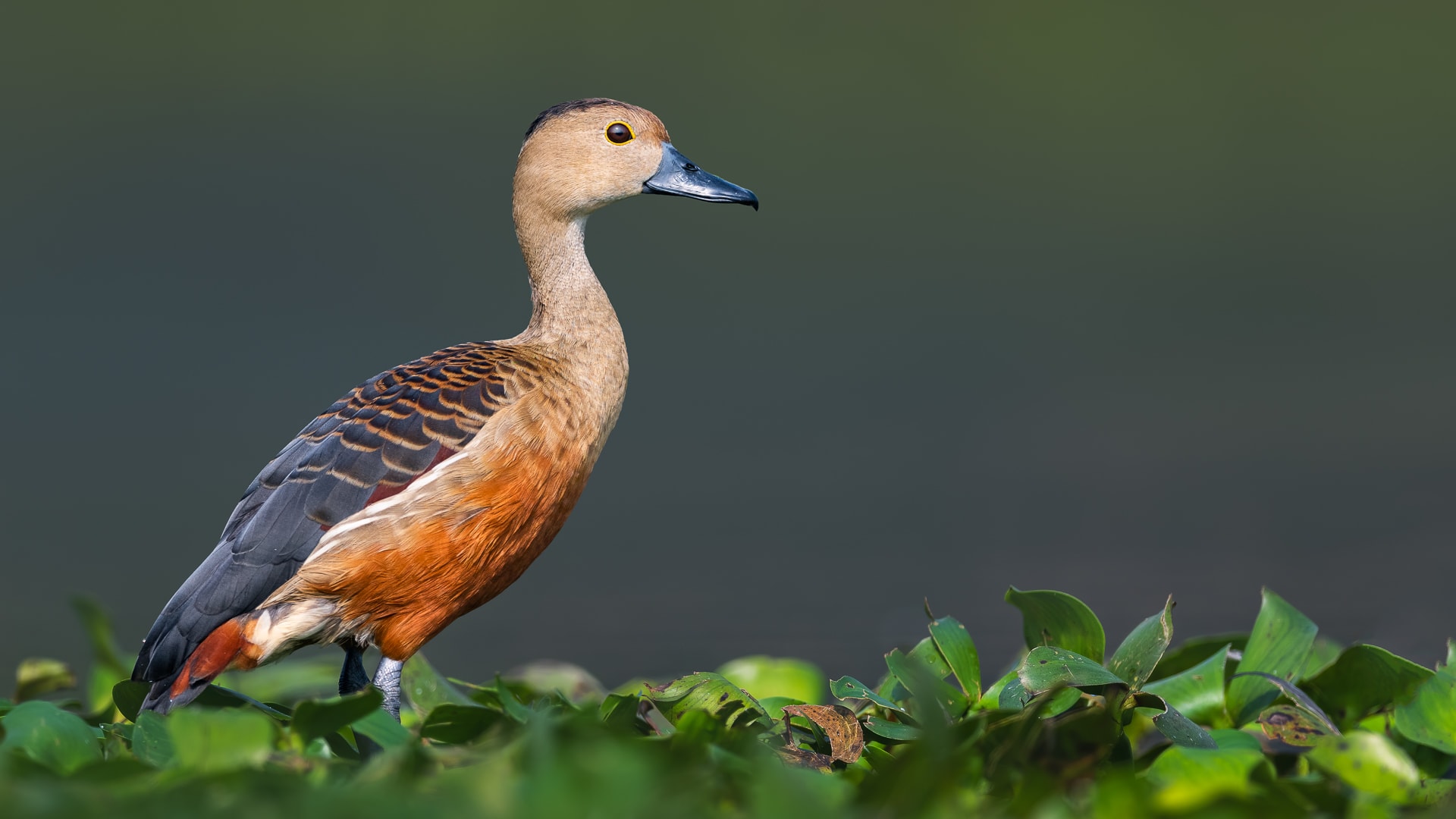 Perhaps the most cheerful of our resident ducks is the lesser-whistling teal (Dendrocygna javanica), a smallish cinnamon-coloured duck with an upright posture and a cheeky schoolboy “seasick-seasick” whistle, usually given on the wing. Photo: Abhishek Das 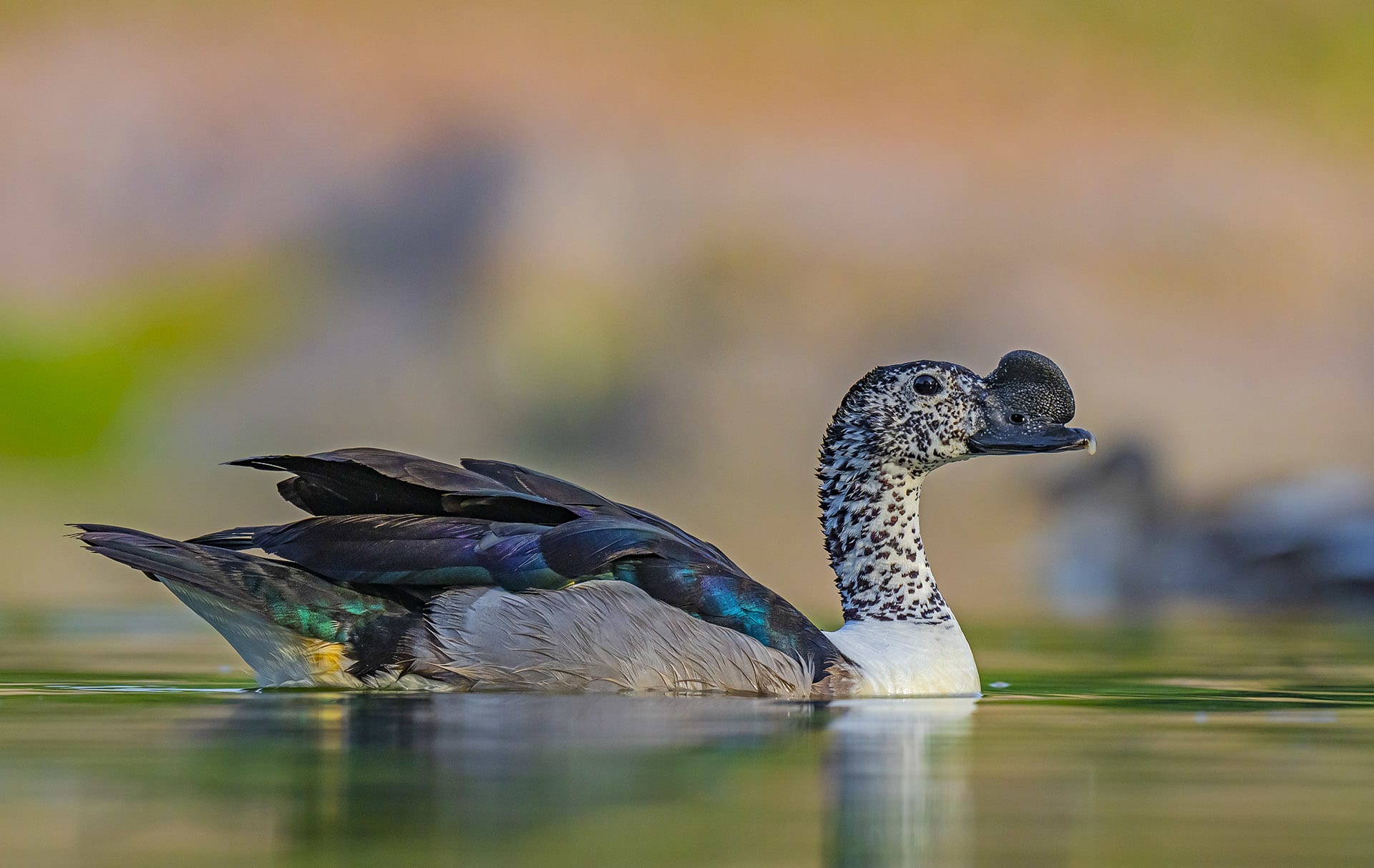 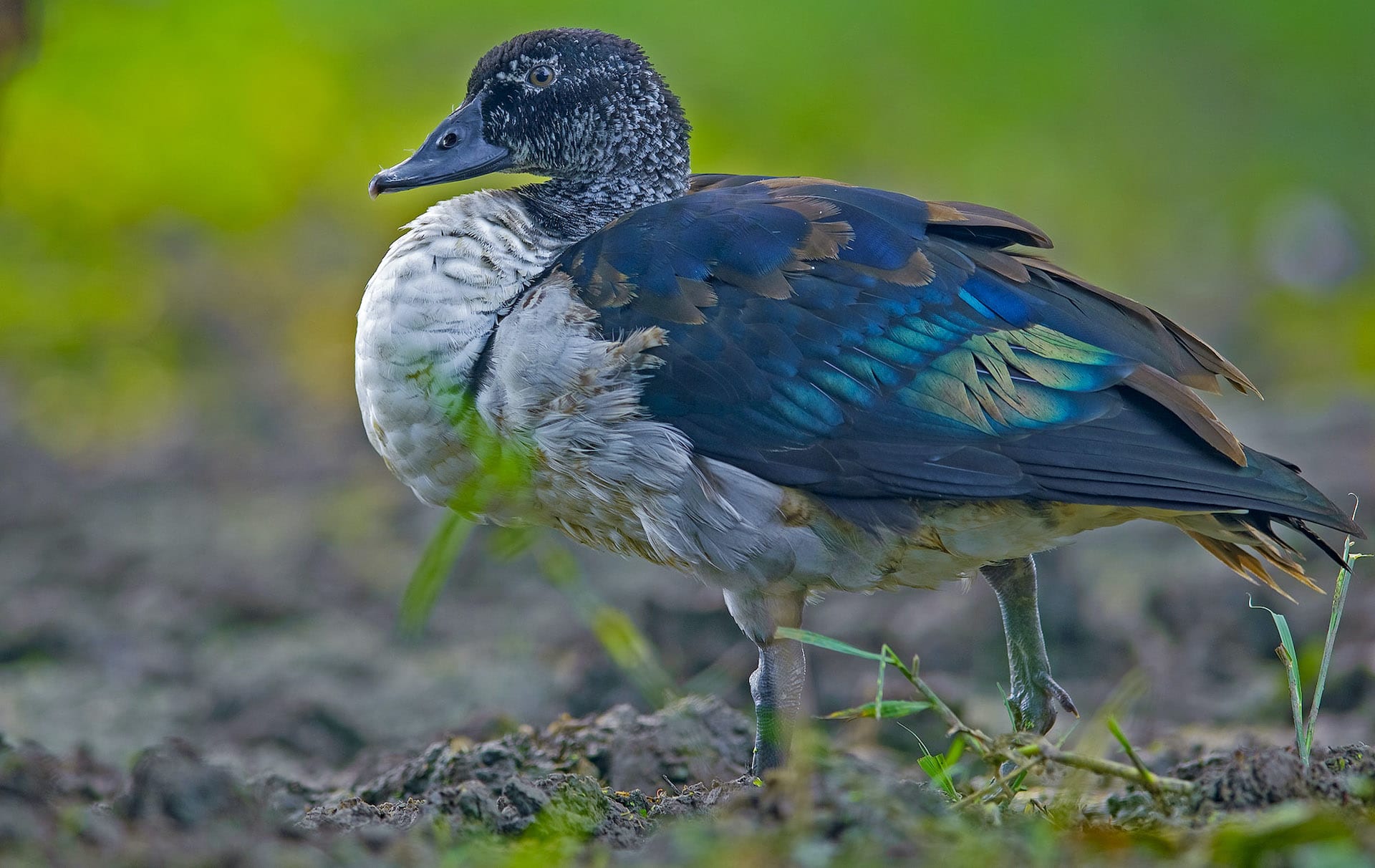 The larger inky black and white nakta, looks like it has an ink-bottle balanced on its bill (only the gents) (left) and spatters of ink on its face. On the right is a non-breeding male. Interestingly, since they nest in tree hollows, their babies literally fall out of their homes and leg it to the nearest waterbody. Photos: Dhritiman Mukherjee 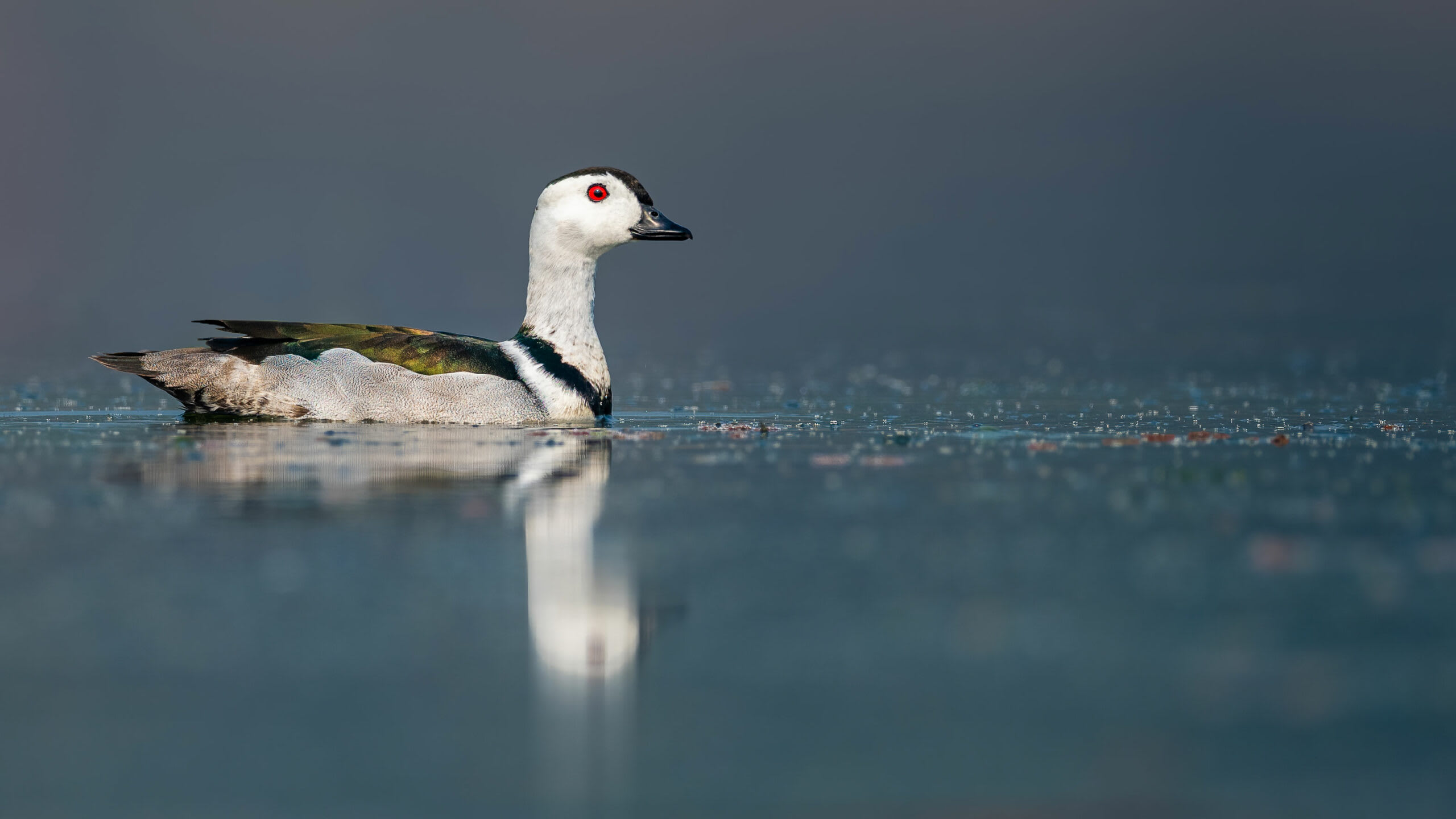 The cotton teal (Nettapus coromandelianus), or cotton pygmy goose (alias quacky duck), is the smallest duck in the world. It wears a black cap on a white head and a broad black collar at the base of its throat. The back is black with a metallic greenish and purplish sheen, and the little duck looks a bit downcast as it swims around, with its head lowered. Photo: Abhishek Das 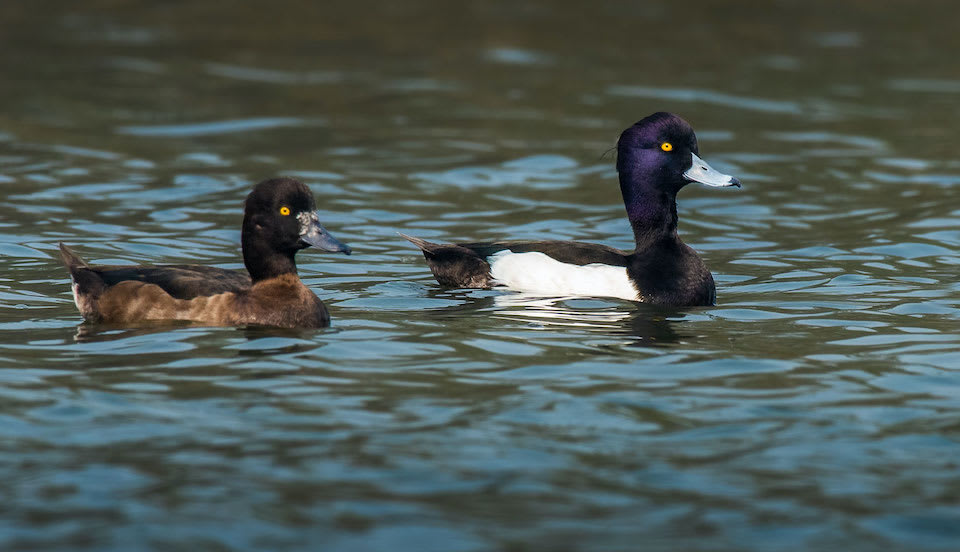 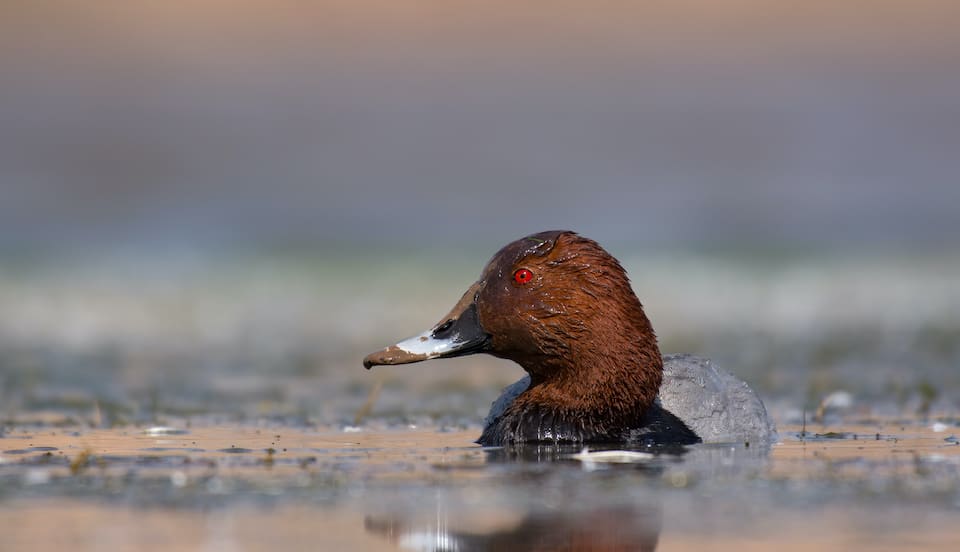 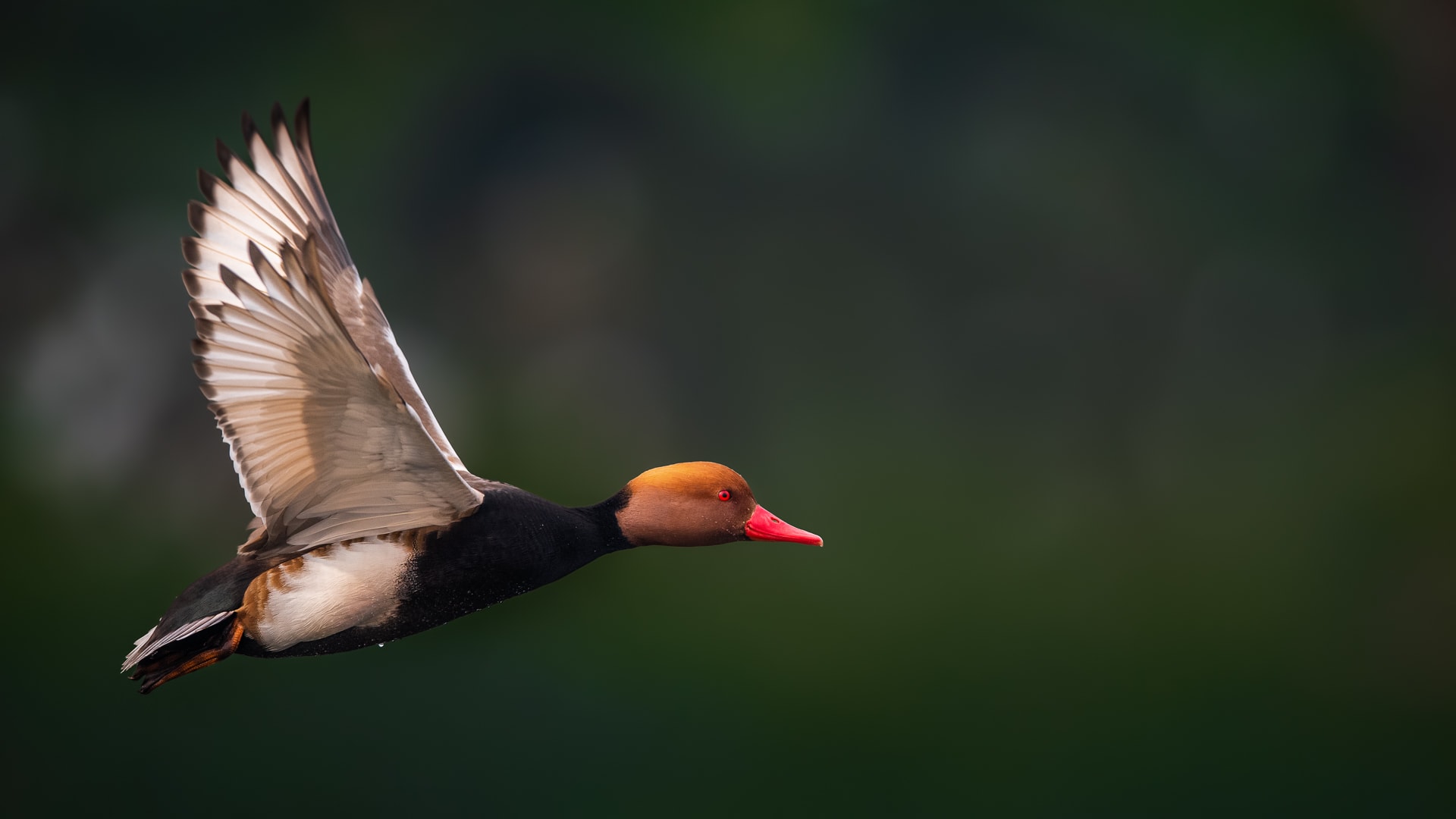 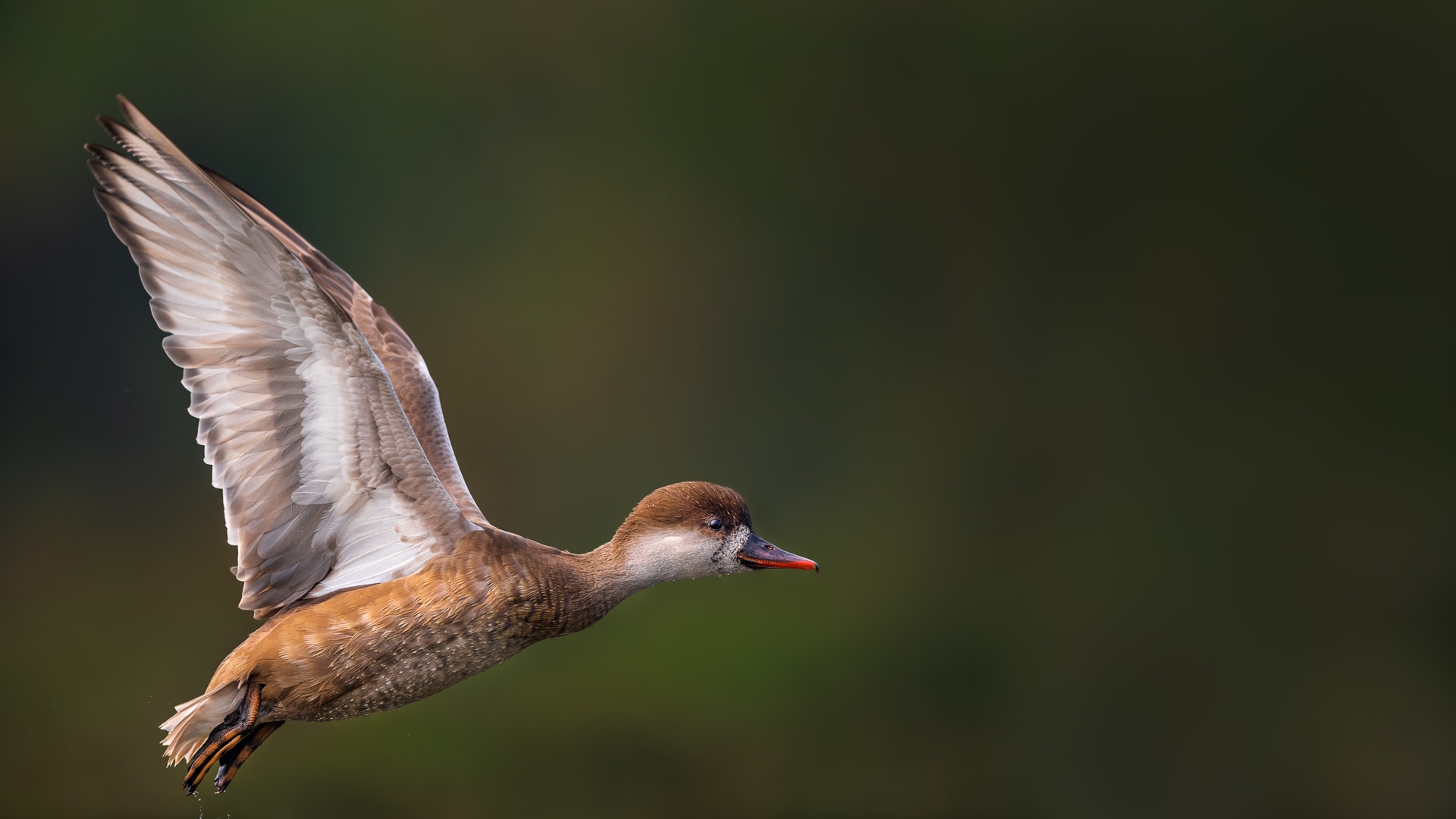 Diving ducks are tubbier and not so brightly coloured. The common pochard (Aythya farina) (top right) is a dour-looking, red-eyed fellow in gunmetal and ginger, while the tufted pochard (Athya fuligula) (top left) is austere in black and white (with a glaring yellow eye) and wears a small “shendi” like crest. The male red-crested pochard (Rhodonessa rufina) (above left), photographed here at Purbasthali in West Bengal, is an exception to the dowdy rule. His squarish head is bright henna, his bill glistening vermillion (like fresh lipstick), and he wears a black polo-neck and brown and white outfit. Pochard ladies (above right) are generally duller in colour than the gents. Photos: Abhishek Das (top and above left), Vipul Ramanuj (above right) 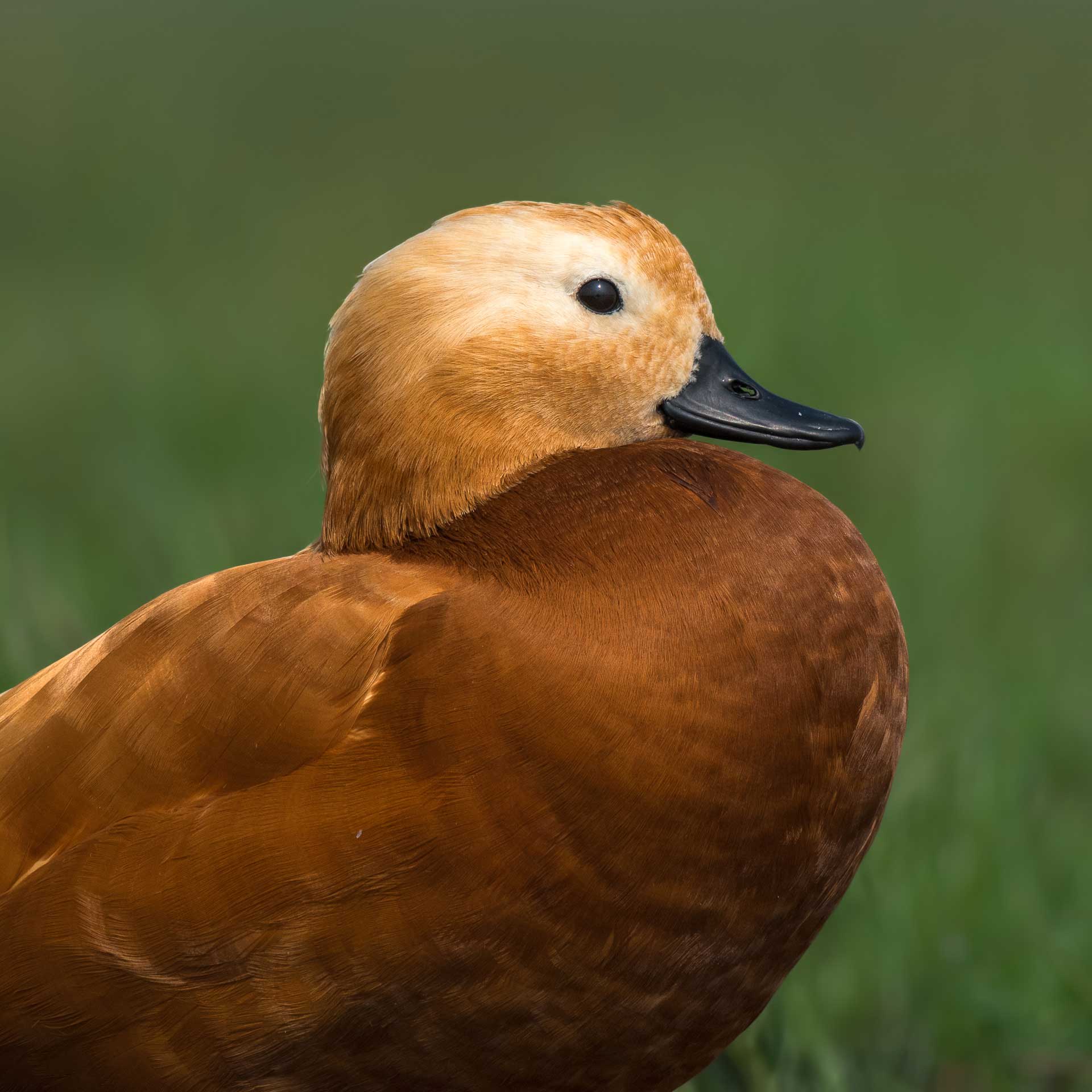 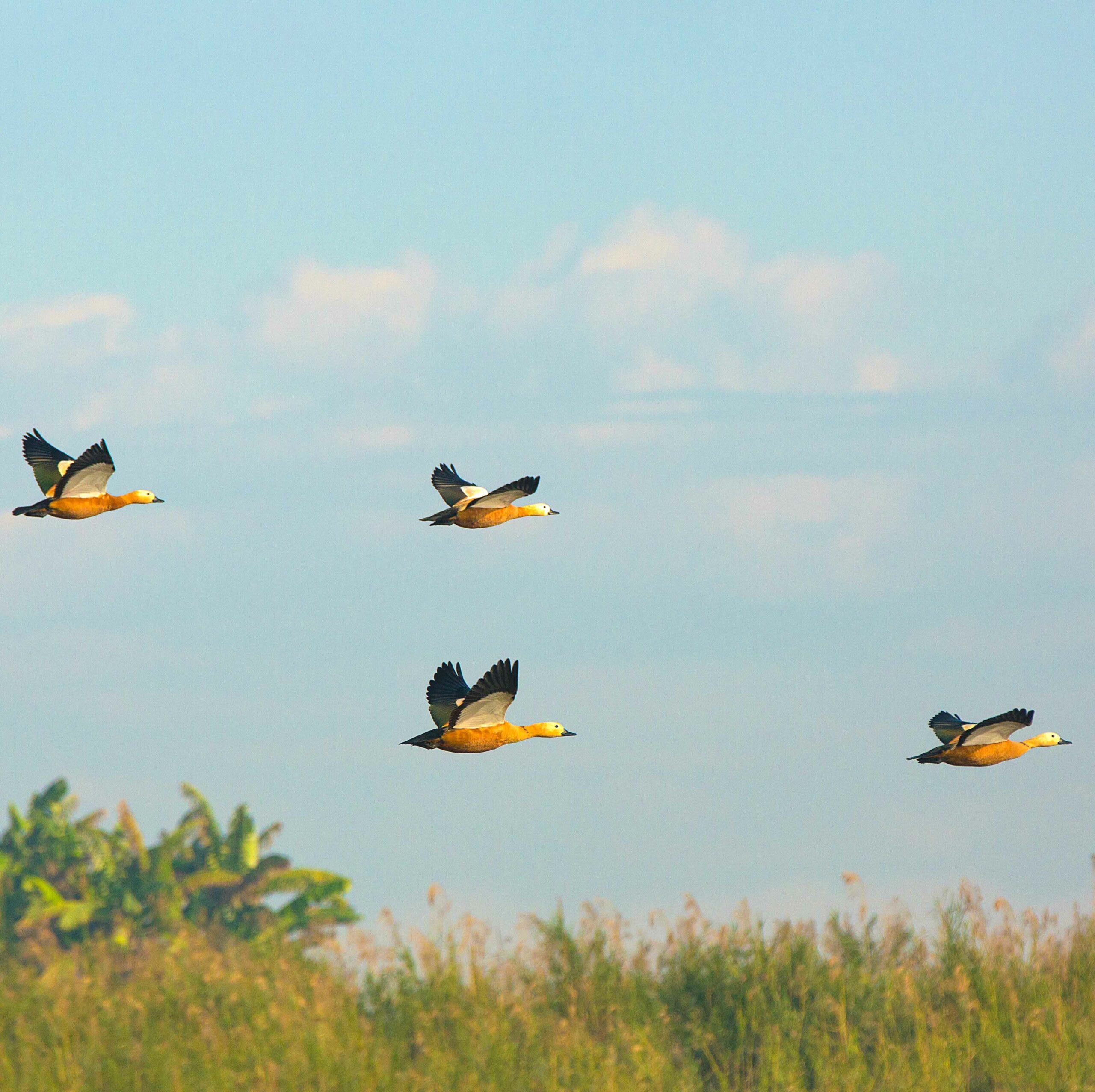 Ruddy shelducks (or Brahminy ducks) are winter visitors in India. Scientists have tracked them flying to a height of 6,800 m while migrating across the Himalayas. They breed in Ladakh and are ridiculously tame there amongst the Buddhist population but exceedingly wary at their winter homestays in the rest of the country. There is something comforting about watching ducks from a hide as they float around lazily on a winter afternoon, murmuring to one another, paddling to within a few meters of you. But as winter gives way to spring, the gents will put on their shiniest outfits and approach the girls, bobbing their heads as they attempt to pair off. And then, one fine day, the lake once freckled with ducks will lie empty and still, save for the few residents left behind. And you wonder: do they miss their winter guests, or are they pleased to have the lake all to themselves once again? Photos: Abhishek Das (left), Mayank Soni (right)