Asian elephants use a range of sensory signals to bond with each other, mate, even express grief and empathy

The study of animal communication (aka zoosemiotics) is both complex and compelling. It requires researchers “to understand and analyse behaviours, emotions, learning processes, sexual conducts, semiotics, and even impact of nature or environment on the living of several species different from their own,” writes Niladri Sekhar Dash in a paper on animal communication systems published in the International Journal of Communication. For many researchers, understanding how animals communicate is important for understanding their behaviour, and eventually, maybe even communicating with them.

“Most animals communicate with one another to a greater or lesser degree, and the more social a species, the more communicative it tends to be,” states Ritesh Joshi in a paper that was published in the journal Nature and Science. He studied elephant behaviour in Rajaji National Park, Uttarakhand. “While there aren’t any species that can compete with human language in terms of its richness and complexity, some species have relatively large vocal repertoires and extensive communication networks.” Elephants, he says, are one such species using a range of signals to communicate and maintain social structures.

Male and female elephants have significantly different social lives and use communication to different ends. The basic social unit for females is a mother and her offspring. These offspring might be adult females with their own children, which leads to a group with multiple generations, commonly called herds. “They use active communication to reinforce bonds between relatives, reassure youngsters, reconcile differences between family and friends, form coalitions against aggressors, and keep in contact over long distances,” explains Joshi. They use communication primarily to keep the herd together.

Males have more dynamic social lives. While females might spend their entire life with the herd in which they are born, males remain with their natal group until around 10 years of age. They may then join all-male groups, and eventually, settle into a more solitary existence. Males use communication predominantly to assess other elephants in the area, establish dominance and ranking, and during breeding, to find prospective females in the area. As Joshi writes, “Male and female elephants live in two rather dissimilar social worlds, and the manner in which they use their communication skills reflects their different ways of life.” 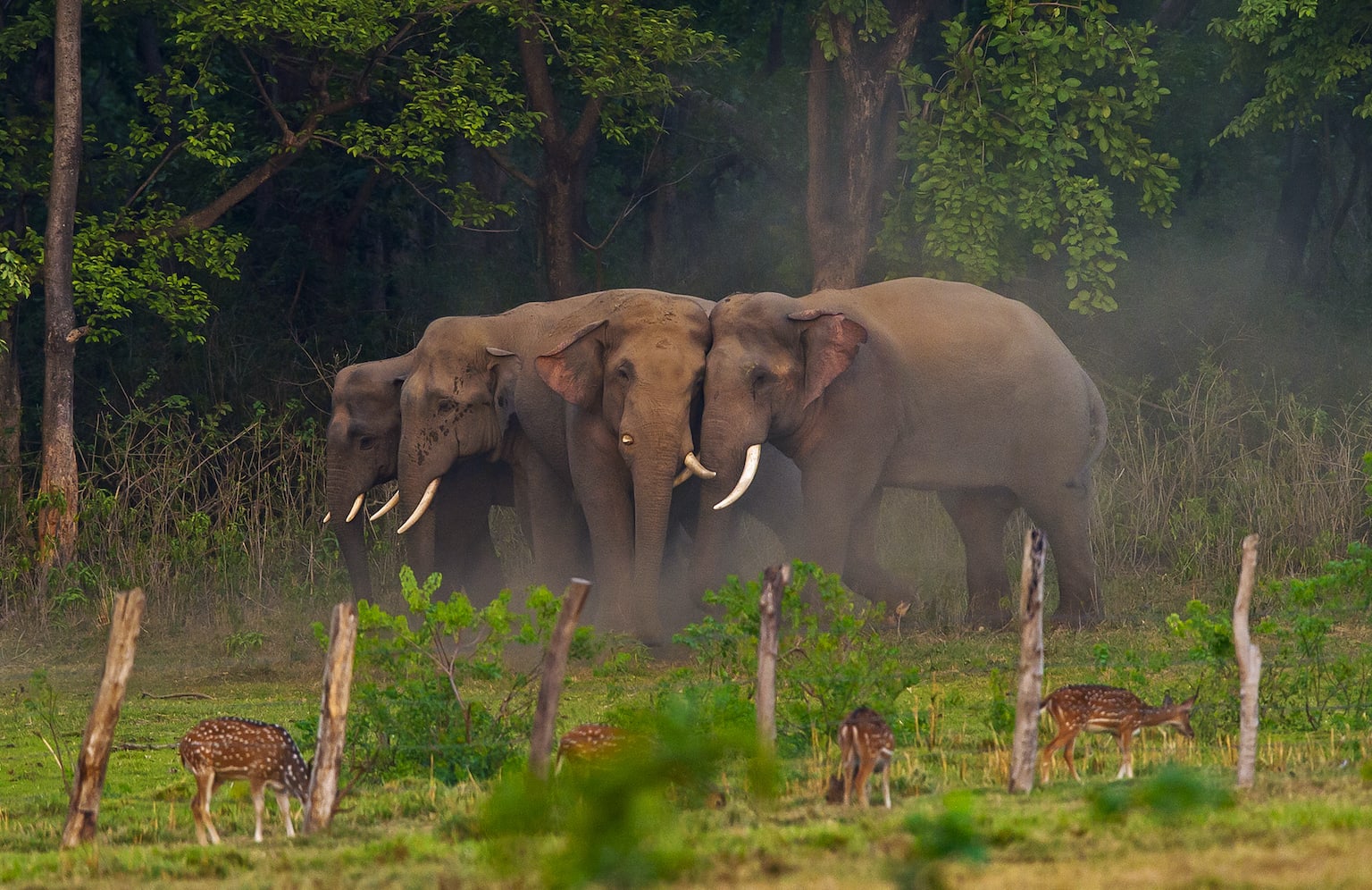 Elephants use four primary methods of communication: visual, acoustic, tactile, and chemical. Visual communication refers to displays using body parts such as the trunk and tail. “Whenever two elephants were in the same vicinity, the first indication that one has become aware of the presence of the other was generally the extension of the trunk by one or both in the direction of the other,” writes Joshi.

Tactile communication, or communication by touch, is what “elephants use to exhibit reassurance, affection and affiliation, exploration, aggression, and play,” write TNC Vidya and R Sukumar in a paper on social and reproductive behaviour of elephants published in Current Science . “The trunk tip is placed on another elephant’s mouth during reassurance, and on the ears, mouth, eyes, tail, and body, while greeting family members that were separated for a while.” Tactile communication is often used between mothers and calves and among young elephants during play.

Elephants also use an array of sounds to communicate with each other, ranging from loud trumpets and roars to softer rumbles and squeals. “The variety of sounds that elephants can produce ranges in frequency from 10 to 14 Hz to 9000 Hz, and as loud as 103 decibels at 5 m from source,” write Vidya and Sukumar. Different sounds have different purposes. Joshi says, “Trumpeting occurs when elephants attack, when they are surprised, and when an individual has gone the wrong way and feels that it has lost contact with the herd,” but they also trumpet when they are in good spirits. In his study, Joshi notes that solitary bulls often trumpet in the “early morning hours when they are in cheerful humour.”

“A significant proportion of acoustic communication of both Asian and African elephants occurs through the use of low-frequency” sounds according to Vidya and Sukumar. Infrasound, which is undetectable by the human ear, is especially useful in dense forest habitats as it travels through objects such as trees, as opposed to being reflected by them. Many species including whales, crocodiles, and some birds use infrasound to communicate. 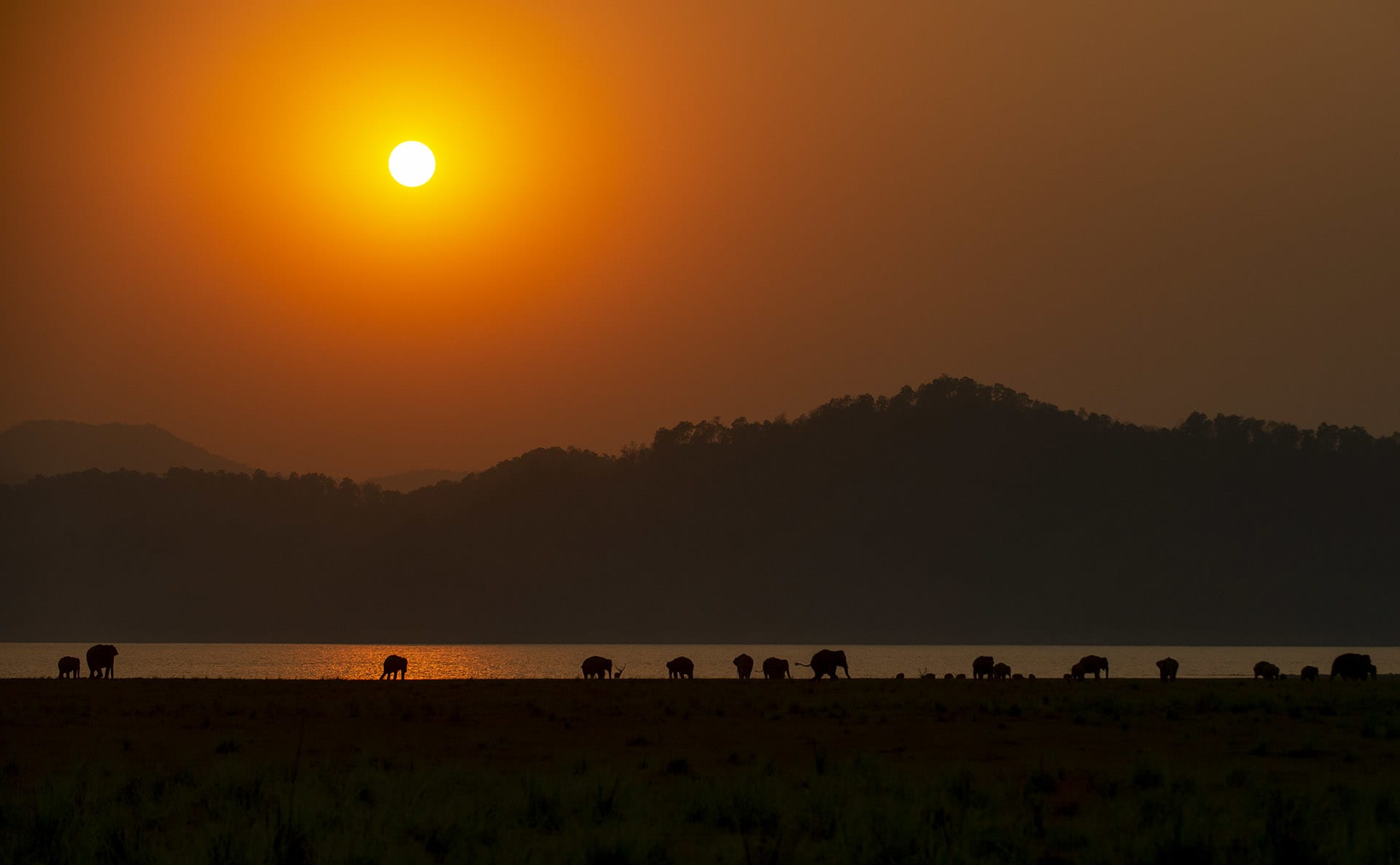 Elephants and many other members of the animal kingdom also use chemical or olfactory communication to convey information about health, location, and reproductive readiness. These chemical signals are carried in urine, faeces, saliva, etc. and are detected by sniffing behaviour, write Vidya and Sukumar. This is a crucial mode of communication, especially during breeding season.

Like many other animals, elephants engage in “love play”, says Joshi, which includes mixing of bull elephants in the group, selecting a prospective partner to mate with, the smelling of genitals, sniffing urine and dung, touching the trunk especially the temporal gland, and discharge of urine. “Long duration of love play and secretion of urine are important factors” promoting successful mating behaviour, he states. 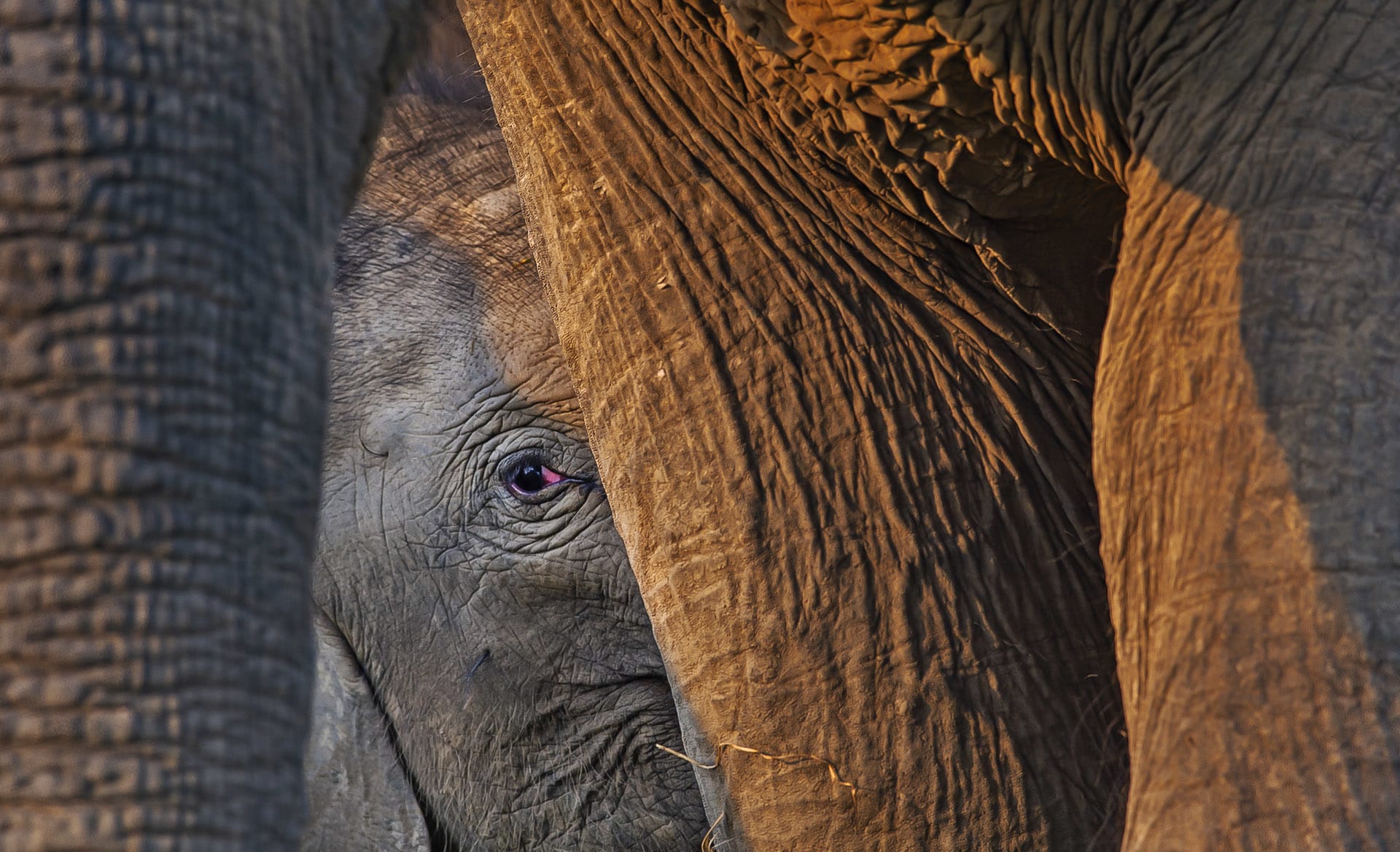 Some studies indicate that animals use these methods of communication to express more complex emotions too. “Elephants also feel grief and mourn when anyone of their fellow dies,” writes Joshi, explaining that this displays their level of cooperation. His paper cites the death of a male juvenile due to a train accident, where he observed three female elephants crying and staying around 50 metres from fallen elephant. When the elephants saw the researchers, they trumpeted loudly and suddenly five other elephants arrived there from the nearby forest. Joshi says they remained there, without feeding for 18 hours, refusing to let anybody approach the body of the juvenile. 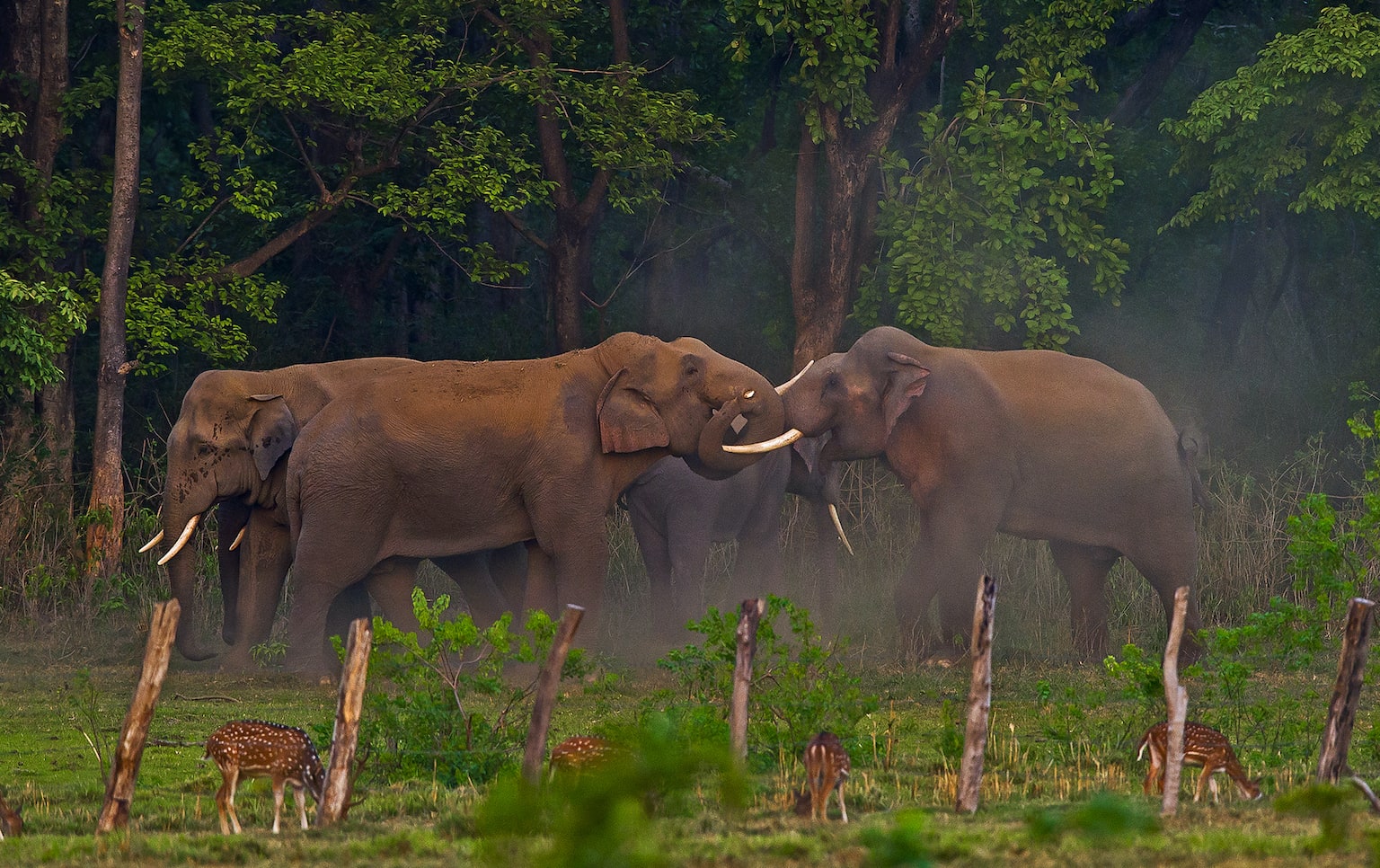 Many conservationists believe that studying elephant communication helps in understanding human-animal conflict from the animal’s perspective, and goes a long way in devising realistic conservation plans. Others maintain that habitat conservation is the only conflict-mitigation strategy that is workable in the long run, in favour of both people and elephants. Without adequate space, the survival of these gentle giants seems unlikely, but unfortunately, this is not considered a viable approach by most governments. As journalist Graydon Carter wrote, “We admire elephants in part because they demonstrate what we consider the finest human traits: empathy, self-awareness, and social intelligence. But the way we treat them puts on display the very worst of human behaviour.”