Elephants display dominance behaviour to establish and maintain rank. This hierarchy is understood by all and reduces potential conflict between them 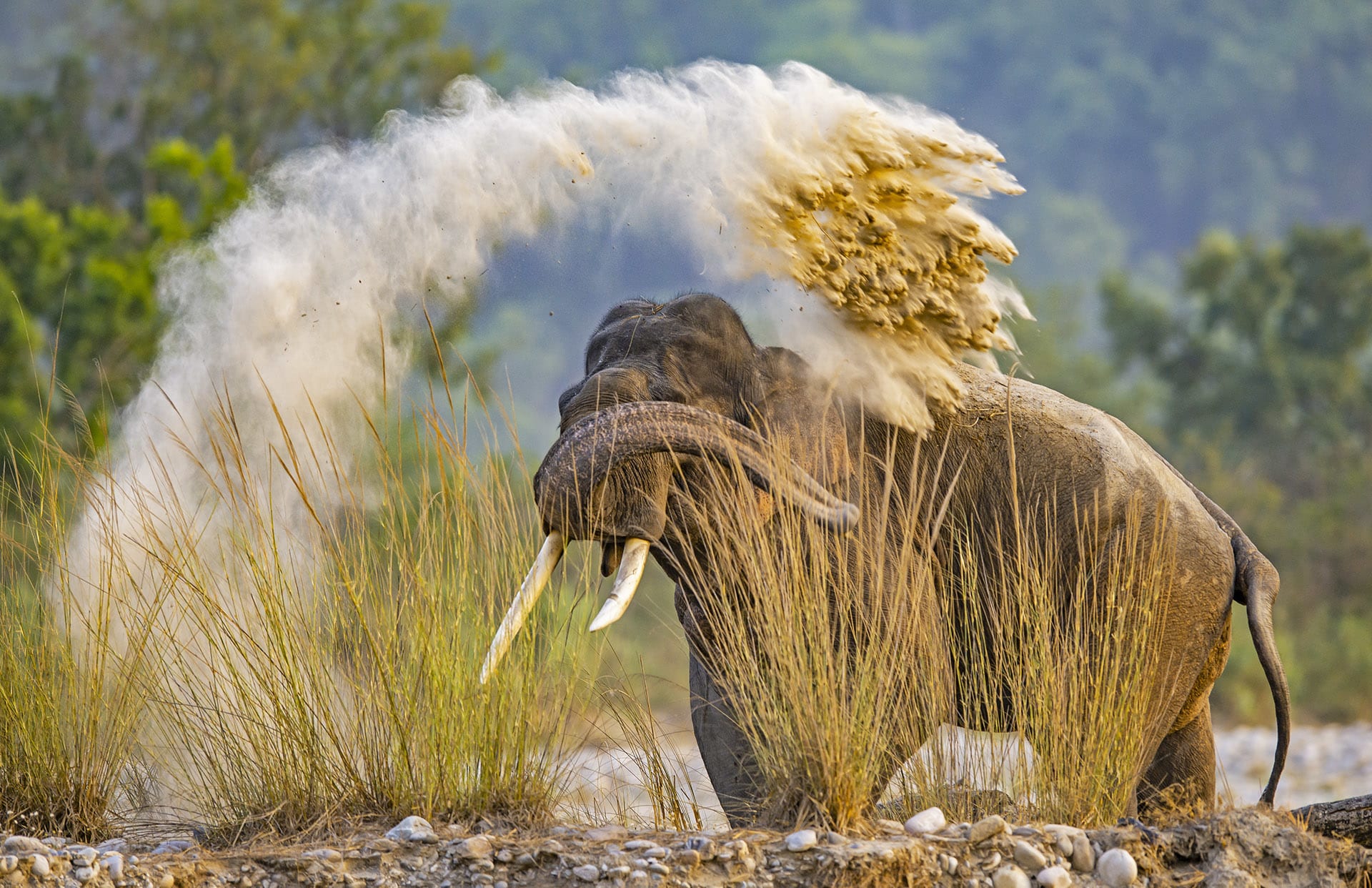 Elephants have fascinated humans for centuries. Their size and grace are awe-inspiring, but it is their complex social structure that continues to intrigue and inspire countless scientific studies.

There are three species of elephants on Earth, the African forest elephant, African bush elephant, and the Asian elephant. Of these, the Asian elephant (Elephas maximus) is found in many parts of India, and Southeast Asia, including Nepal, Malaysia, Myanmar, and Sri Lanka.

Interestingly, male and female elephants have remarkably different social lives, “because their experience of growth, reproduction, and survival is different,” explains wildlife biologist N Lakshminarayanan, who works in the Elephant Cell of the Wildlife Institute of India. “At the end of the day, the currency for evolutionary strategy is the number of offspring left by an individual. Females achieve this by being close-knit and taking care of their young, and males do it a little differently.”

The basic social unit for females is a mother and her offspring. When they are young, males are also part of this social structure, but eventually they leave their natal group in a process that biologists call dispersion. “Some of them may choose to leave early, as young as 8-10 years, if the young male is bold, familiar with the area, and unconcerned with threats,” says Lakshminarayanan. “Some of them may choose to leave later, remaining with the natal herd until the age of 20-25.”

Dominance behaviour is part of elephant society. It’s a kind of protocol to establish one’s position within a group to avoid conflict. “Because these animals are extremely powerful, even a blow from the trunk can the kill the other, so they have evolved ways and means to avoid physical confrontation with each other,” explains Lakshminarayanan. The primary function of dominance behaviour is to establish and maintain rank.

One of the ways in which dominance is exhibited is through play. “When they engage in this play, they learn each other’s strengths and weakness,” says Lakshminarayanan. “This is how ranks are set within a herd, and between herds when they meet. One bull knows that the other is more physically powerful, so he knows to back down if threatened.”

Assessment is another aspect of the social life of elephants and allows animals to size each other up in non-aggressive ways. Dusting is an example of this behaviour, and involves elephants using their trunks to throw mud over themselves, to keep parasites and flies away. “They do dusting when they are at leisure, or when they are being observed by another elephant and do not want to show their apprehension,” says Laksminarayanan.

When young males leave their natal group, they invariably form groups with other males of a similar age, or older. These all-male groups have their own dynamics, hierarchies, role models, and ranks, that are determined through different types of communication. “Head raised has a meaning, head bowed has a meaning, tail erect or tucked in has different meanings, seeing behind the shoulder has a meaning,” explains Lakshminarayanan, listing some of the visual displays elephants use when greeting each other. Physical build is important for rank and for breeding. “Their physique is primarily influenced by their nutrition, which is why males tend to take risks while females are more guarded,” Lakshminarayanan says. Females are less likely to venture into new areas, even though they are rich in resources, while males are known to band together while foraging in human-modified areas such as agricultural fields and plantations. In this way, Lakshminarayanan says, the behaviour of males is governed by their life history.

Chemical signals are also integral to maintaining social cohesiveness within a group. The most significant of these chemical communications is musth, which is marked by secretions, hormonal spikes, and changes in the behaviour of adult males. “One purpose of this is to let other males know to keep away, as musth is synonymous with increased vigour and high physical power,” explains Lakshminarayanan. “The other is to let females know that one is ready for breeding.” Dominant males in musth have their choice of mate and will seek out herds with receptive females at this time. “Even if there are 20 females, the bull will mate with all of them,” Lakshminarayanan says. “but he might also mate with females from multiple herds if they are available.” 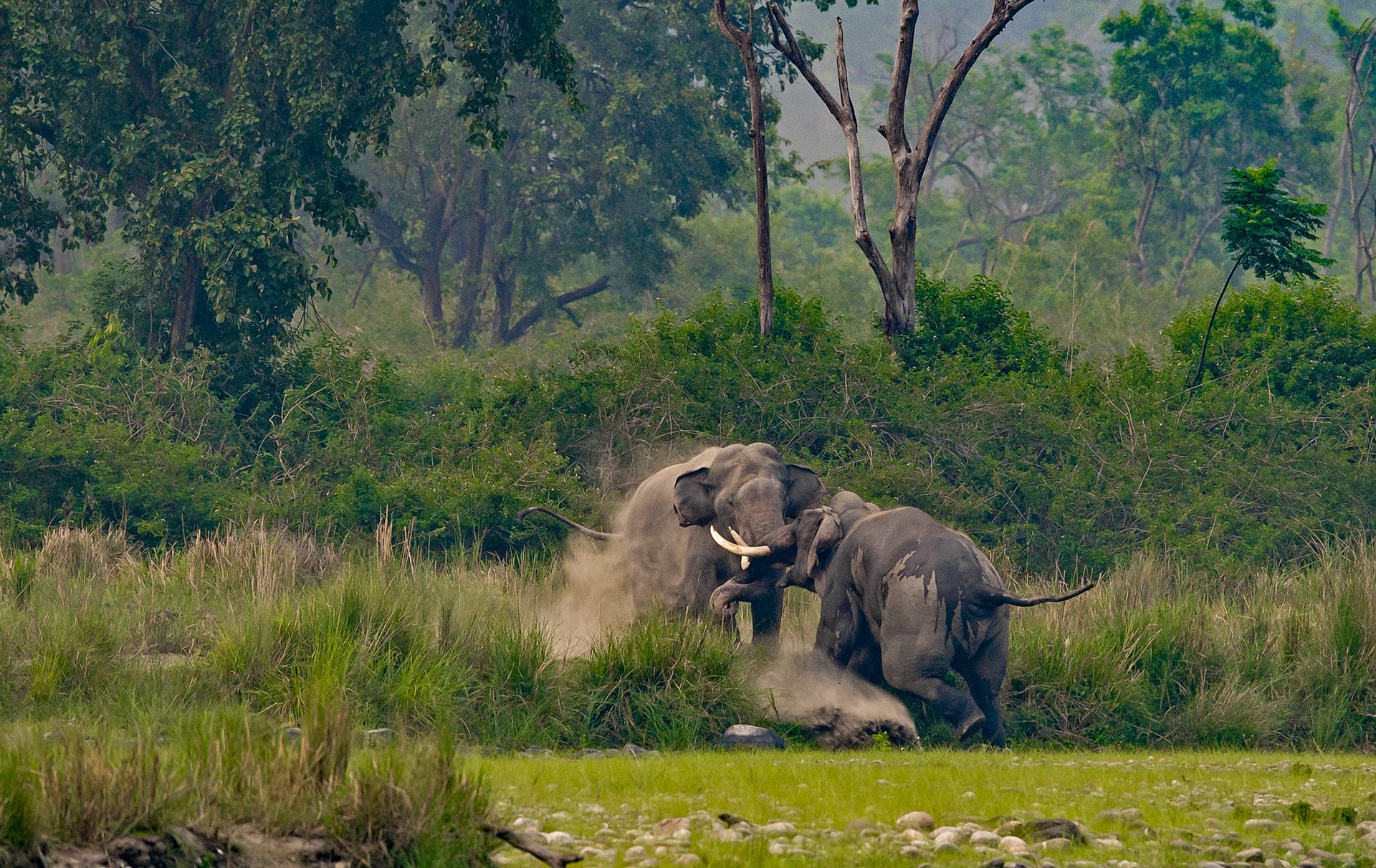 Females are not an easy resource for males. “Although there are many females in the population, most of them might be carrying offspring or suckling,” Lakshminarayanan says. In these situations, males of a similar rank might fight each other due to simple scarcity of adult females. “If there are two elephants that are the same age, same size, but have not interacted with each other very much, so they have not established rank as yet — these are the situations where conflict might arise.”

Older males, tend to live a more solitary existence, remaining largely unattached to groups. “There is a big difference between solitary and alone,” stresses Lakshminarayanan. “Alone is an absence of social interaction, like a hermit, completely cut off from others.” Solitary animals on the other hand, do engage in social interaction, but remain largely independent. 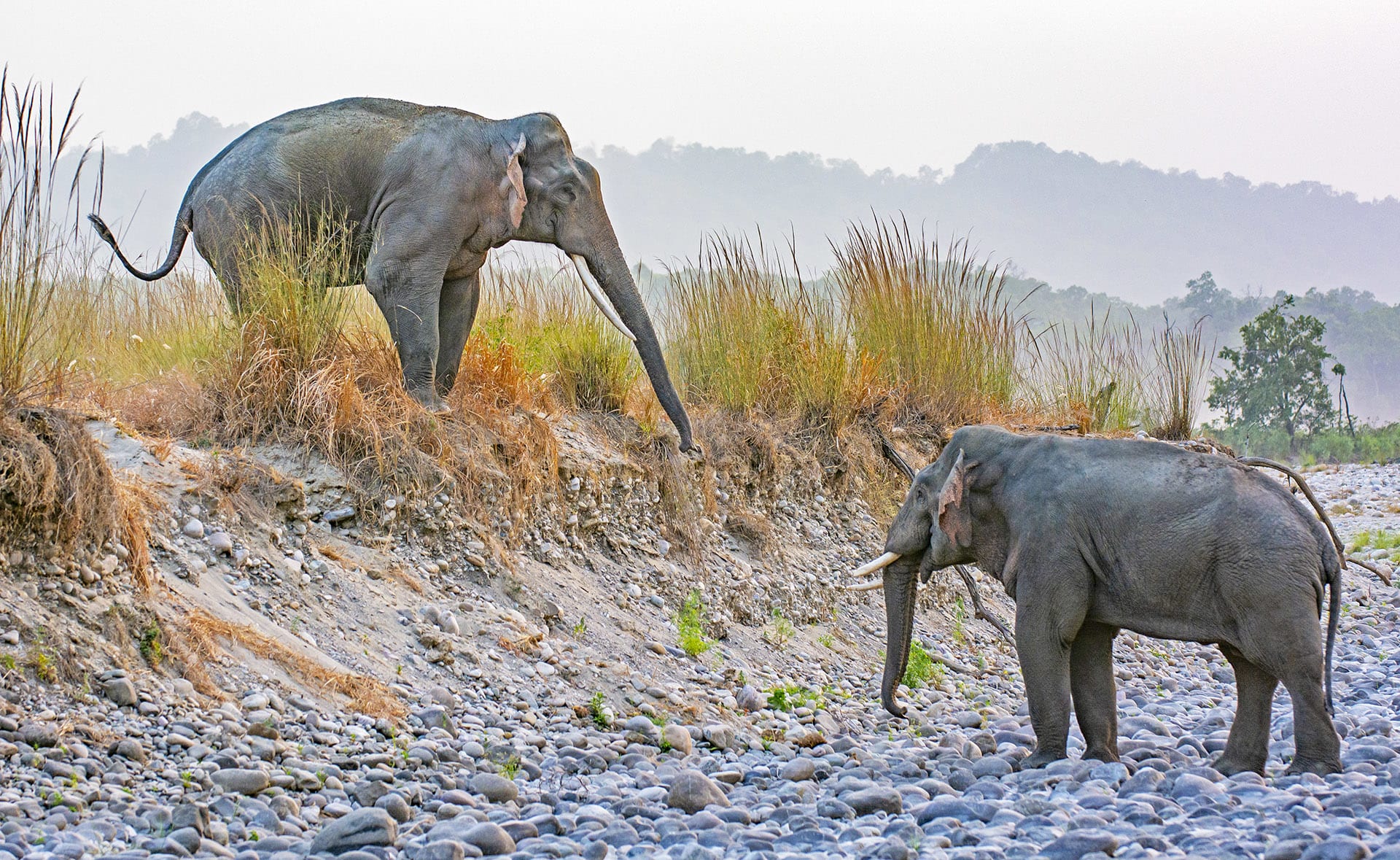 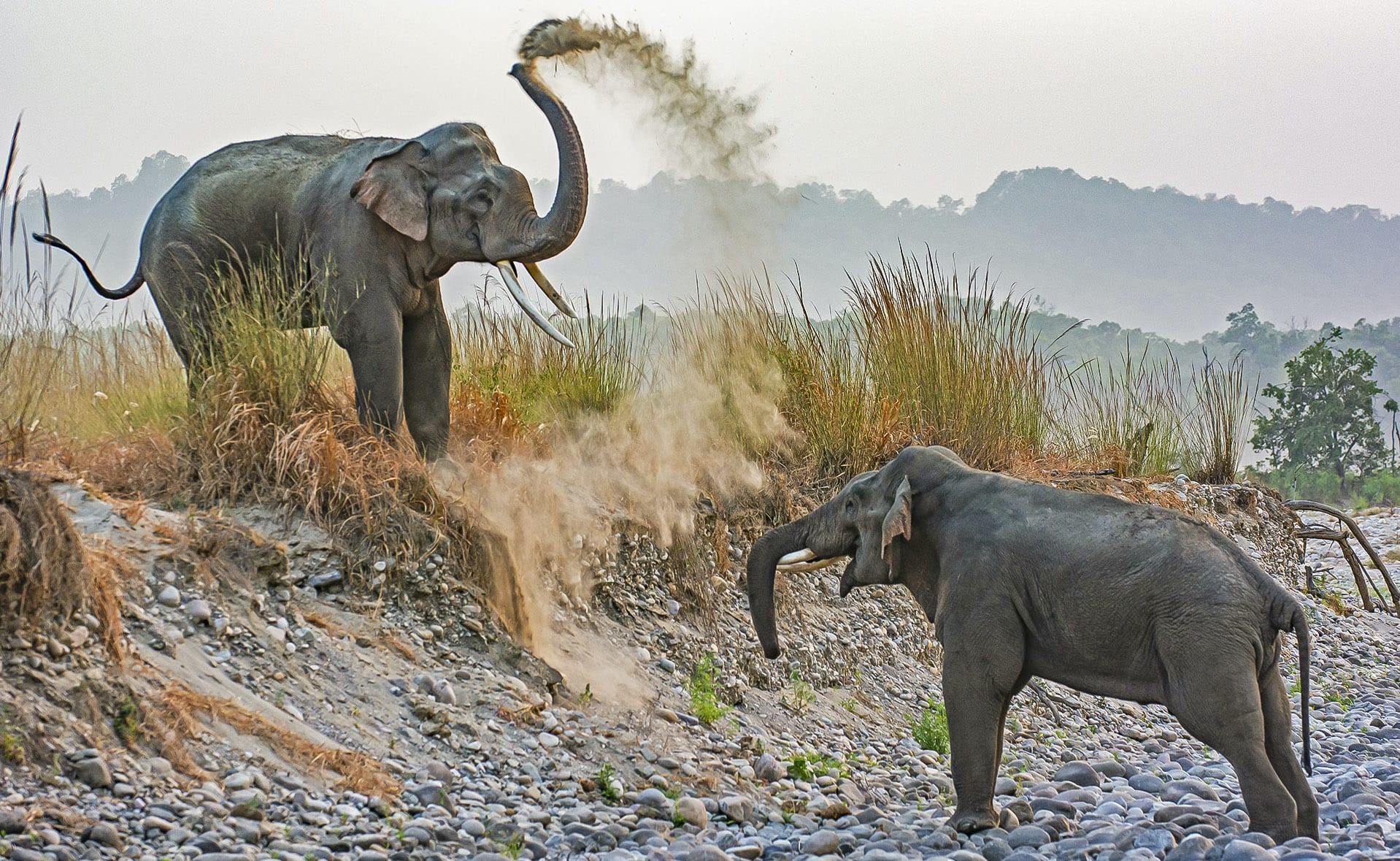 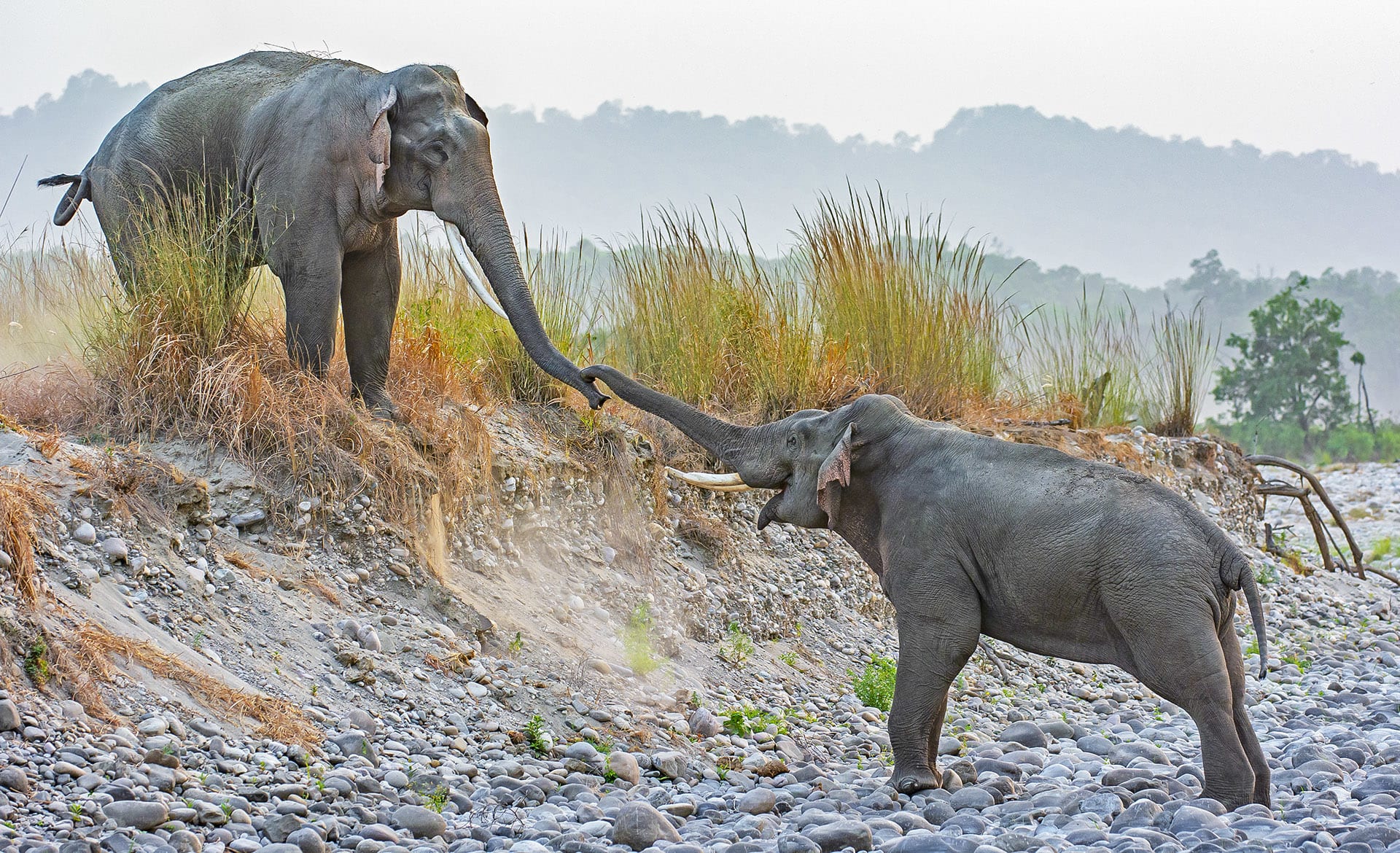 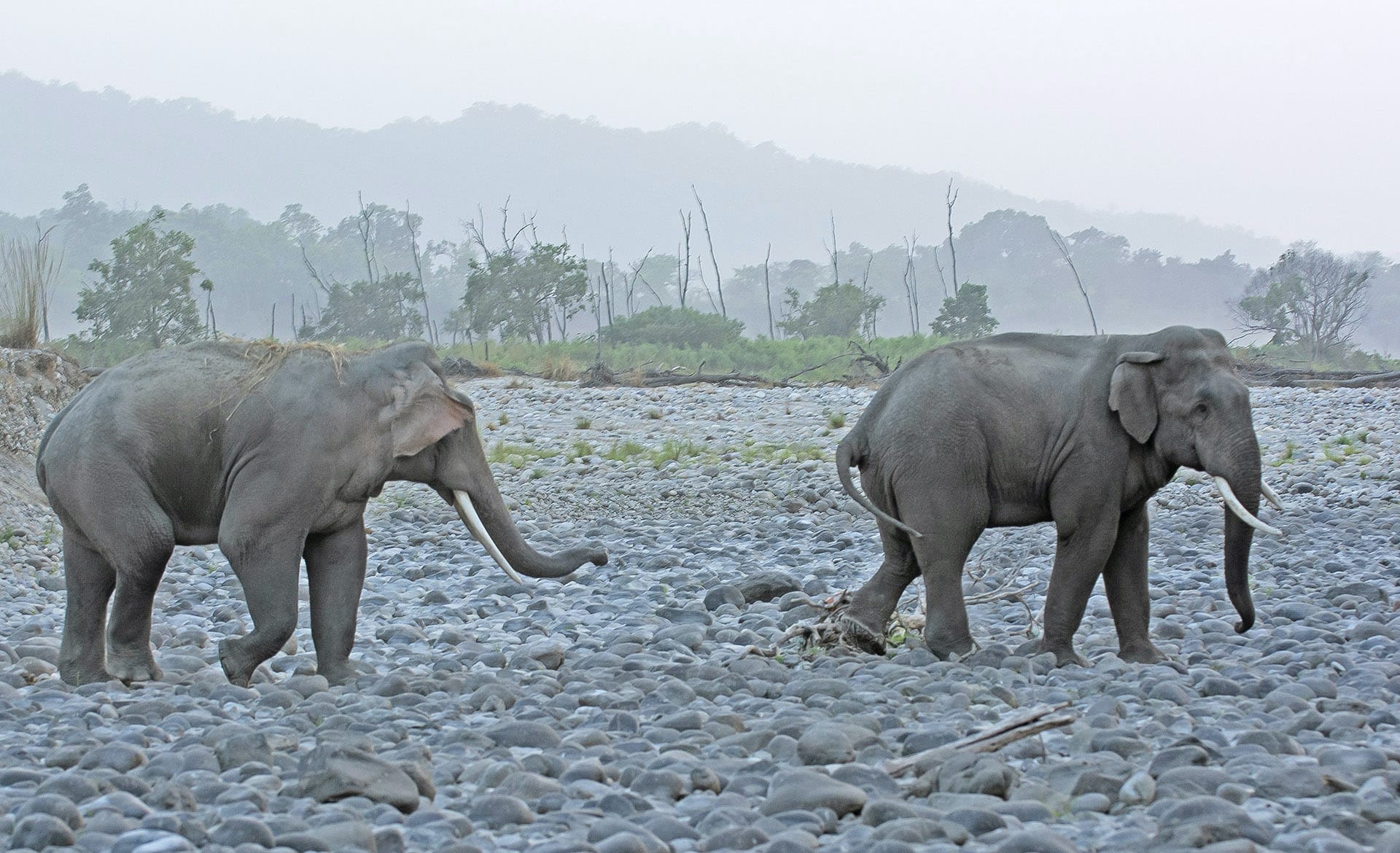 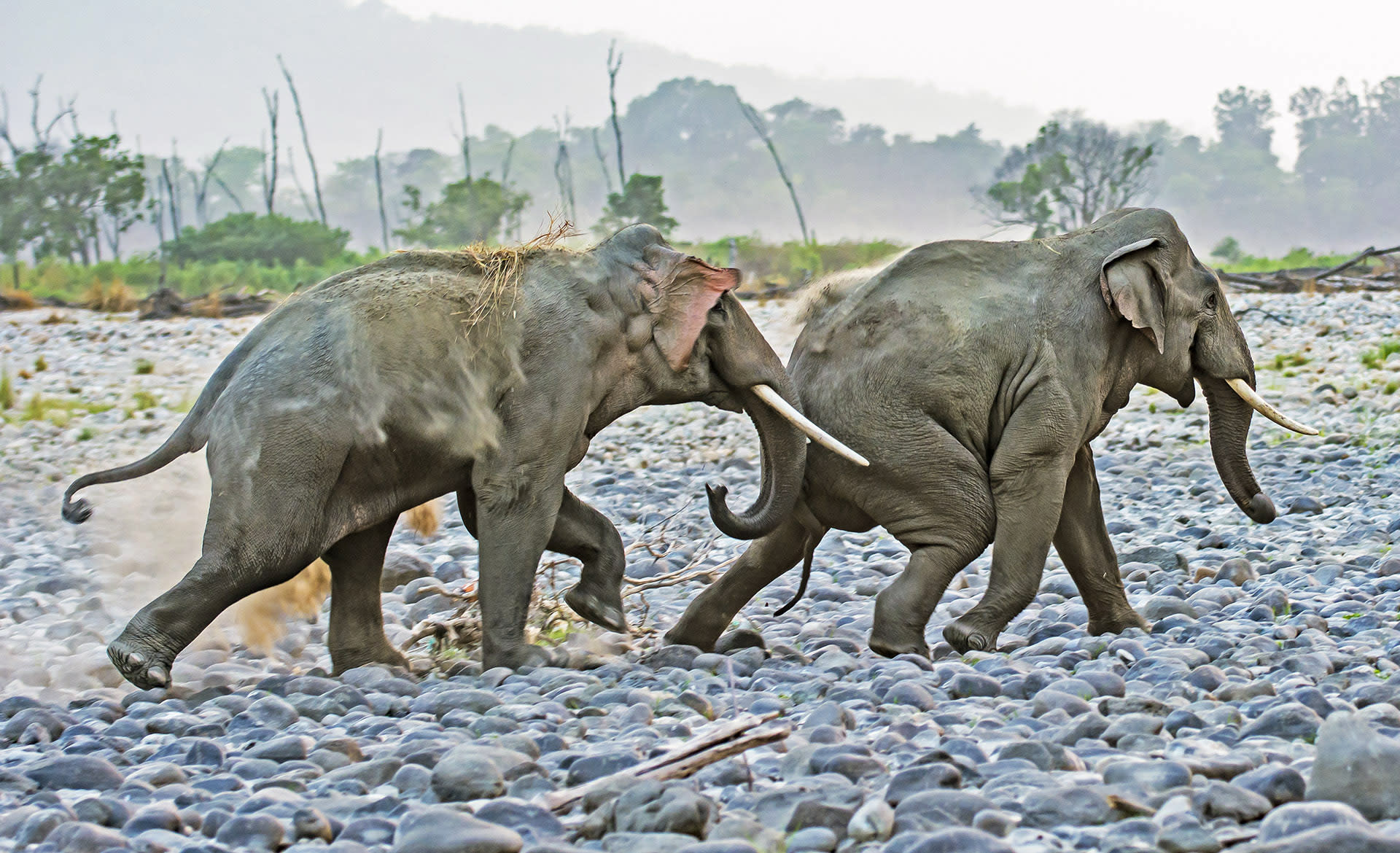 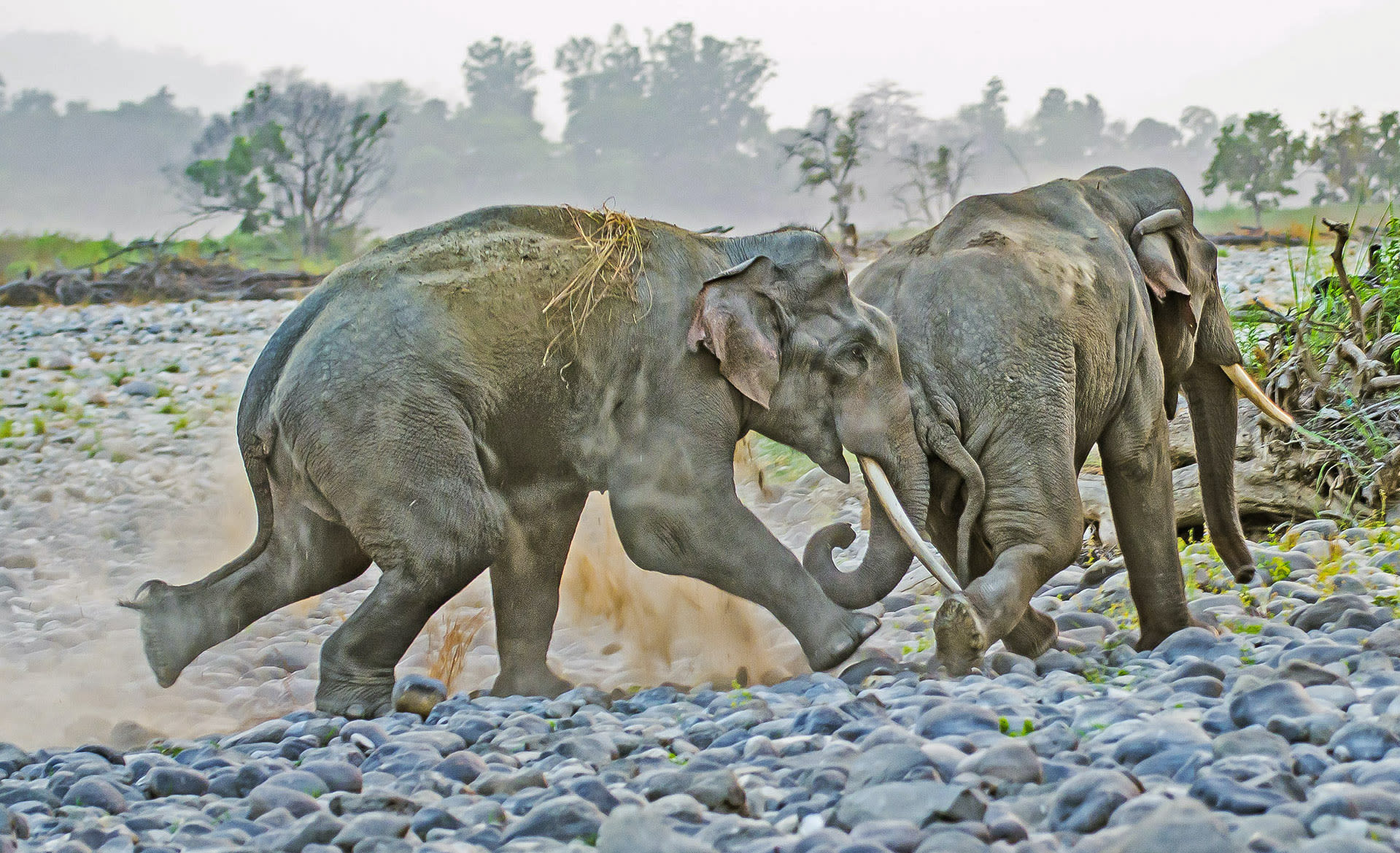 On a visit to Corbett in 2014, photographer Dhritiman Mukherjee photographed a male feeding in a patch of grassland by himself, when he noticed another male emerge from an elevated area. “At first the visitor retreated, but after a few minutes of dusting, the mood changed, and the first elephant approached the other with his trunk outstretched, as if in greeting,” he says. They made their way back to the grass together, but as soon as the first one turned around, the visitor shoved him from the rear. “To me, it was surprising because the same elephant that had displayed friendly behaviour only a few minutes ago was now displaying dominance. It was almost human-like to see this kind of pretence.”

As parts of the elephant’s habitat is being usurped, instances of human-animal conflict have become a greater cause for concern among conservationists. “During musth, their aggression levels will increase, so they are more likely to stand their ground during interactions,” Lakshminarayanan says. “For example, if you encounter a bull while driving, and instead of backing away, you stand your ground and blow the horn – it might be construed as a display of dominance.” 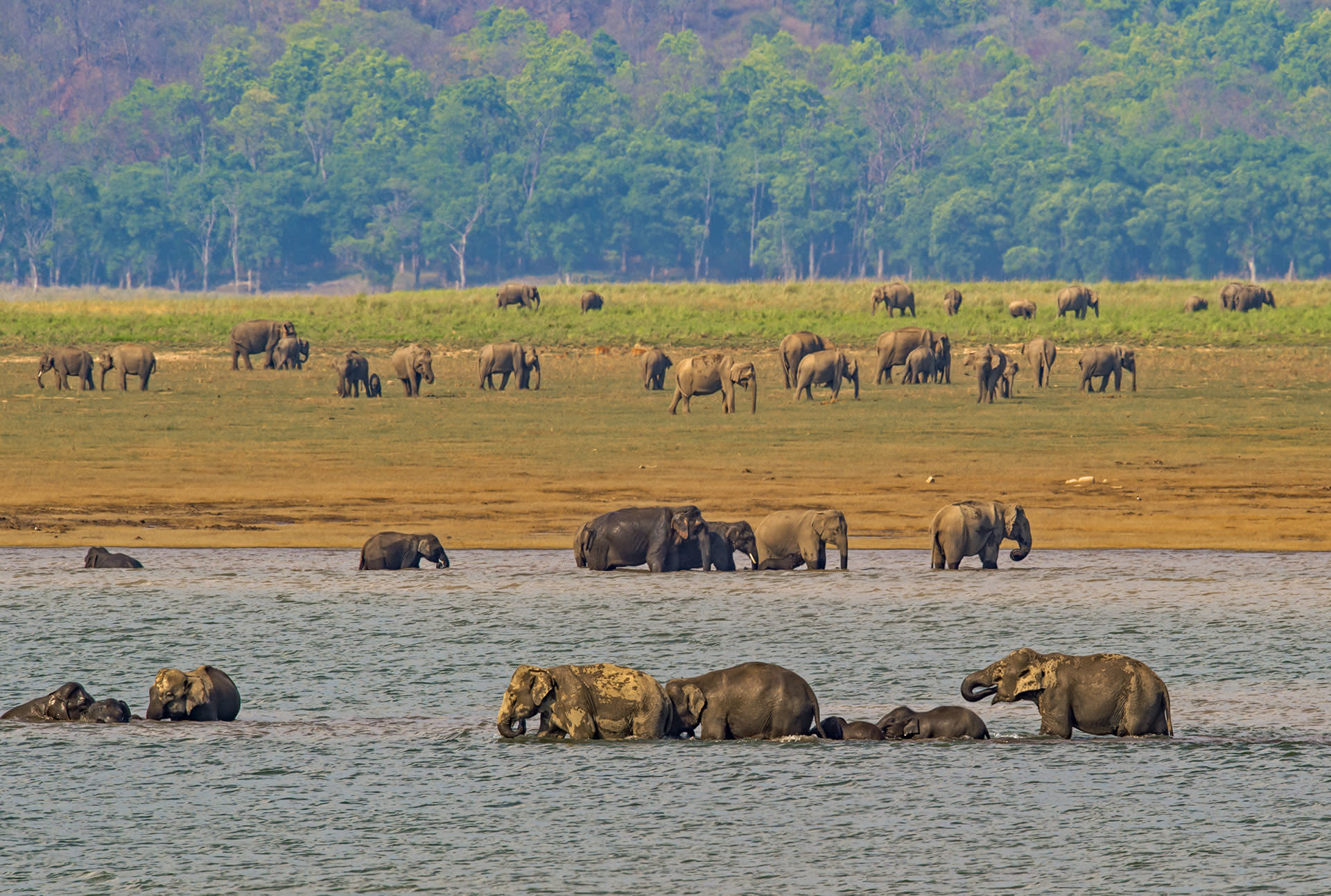 We tend to associate dominance with violence and aggression, but these displays are meant to diffuse conflict. They are an integral part of the life of male elephants, from the time they are young calves in the natal group, to their mature years in solitary existence — and they help maintain cooperation and the family structure.