In the thick mangrove forests of the Godavari Delta, a curious cat is on the prowl. The grey-brown feline has stripes along its face and neck, and spots on its torso and legs ⁠— like a cross between a leopard and a housecat. Its underside is covered in thick, white fur, flecked with muck from the clayey wetland floor, and its eyes gleam yellow-green, like jewels. The cat scans the water for prey: a rodent would make a good snack, a small bird would be nice, but the best meal of all would be a chunky fish caught in a puddle at low tide.

This is the fishing cat (Prionailurus viverrinus), a species of wild feline found in the wetland habitats of South and Southeast Asia. In India, the fishing cat is found in the Yamuna and Gangetic plains, the Krishna and Godavari deltas in South India, in Chilika, Odisha and the Sundarbans. The species has also been reported in the wetlands in the Himalayan foothills, Corbett and Dhudhwa National parks, parts of Nagaland and Arunachal Pradesh, and even in Keoladeo National Park, Rajasthan.

The photographs in this story are from three regions: Coringa National Park in Andhra Pradesh, the suburban district of Howrah in West Bengal, and the village-town of Bangaon on the West Bengal-Bangladesh border. Coringa is a lush habitat of coastal mangrove forests in the Godavari delta, Howrah and Bangaon are pond-driven wetland landscapes with as much concrete as greenery. All three are thriving habitats for fishing cats, though their behaviour in each region varies slightly.

Even in South India, “the behaviour of fishing cats in the mangroves of the Godavari Delta is different from in the Krishna Delta,” says Srikanth Mannepuri, of the Fishing Cat Conservancy, who has been studying the species closely since 2015. In areas between mangrove forests with agricultural patches, their behaviour is different too, he says.

If this endangered species is to be protected, efforts need to be customised to their immediate habitat. To do this, we need to understand this rare feline and the ecosystem it inhabits.

In the coastal mangrove forests of Coringa, the movements of fishing cats ⁠— and many other species ⁠— are determined by tides, as the water levels change every six hours. During high tide, the cats can be found on branches of trees or curled up on raised land. When the tide recedes, they seek out shallow pools of water to hunt for fish. “I have seen lots of nocturnal activity among fishing cats,” says Mannepuri. “But I also have hundreds of examples of day activity in camera traps.” Photo: Dhritiman Mukherjee Cover Photo: Fishing cats belong to the genus Prionailurus, which includes three other species of small wild cats — leopard cat, rusty spotted cat, flat-headed cat — all from Asia. The fishing cat is the state animal of West Bengal, where it is called mach bhagrol. Cover Photo: Anjani Kumar

Coringa has the second-largest contiguous mangrove forest in the country (after the Sundarbans) and its protected area covers 235 sq km. Species ranging from jackals to pit vipers are found here, but the fishing cat is the official mascot of the national park. Photo: Dhritiman Mukherjee

Fishing cats eat more than just fish. Their diet includes eels, rodents, crabs, small birds, even reptiles, such as the dog-faced water snake (pictured here), abundantly found in mangrove forests. In Coringa, the cats also feed on bush rats that nest in treetops due to changing water levels. “Fishing cats are very good climbers,” says Mannepuri, “and I have observed them catching these rats when they are returning to their nest.” Photo: Pallavi Laveti 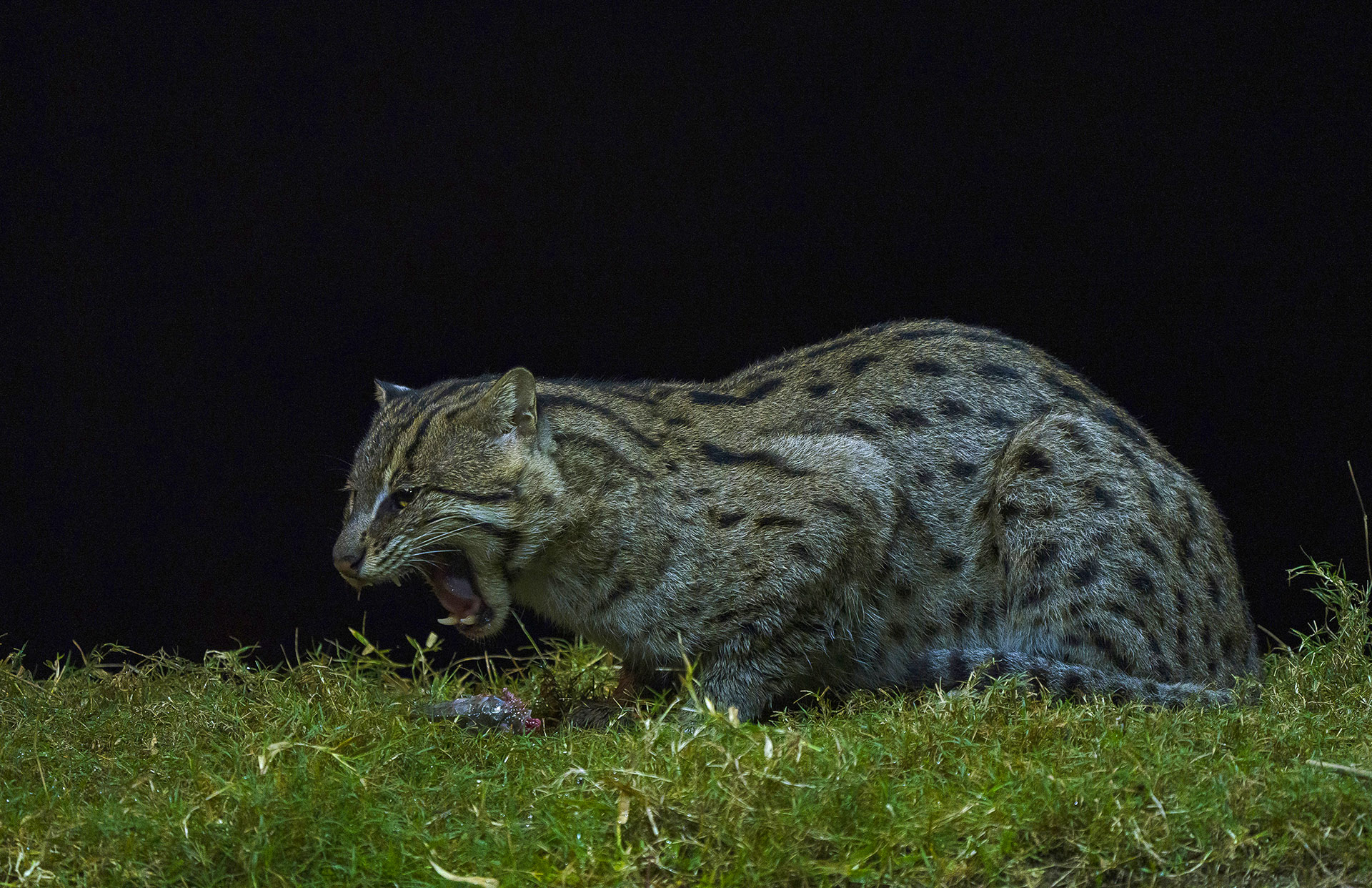 According to Mannepuri, the fishing cats of the Godavari are not averse to scavenging either. He recalls setting up a camera trap near an otter’s burrow to monitor the family’s behaviour. “Otters are adept at hunting for fish, and especially enjoy eating the fish head,” Mannepuri explains. “Sometimes, otters will eat the head first, and I have observed two fishing cats, a mother and kitten, eating the leftovers. They relish the belly portion of the fish.” Photo: Tukai Biswas 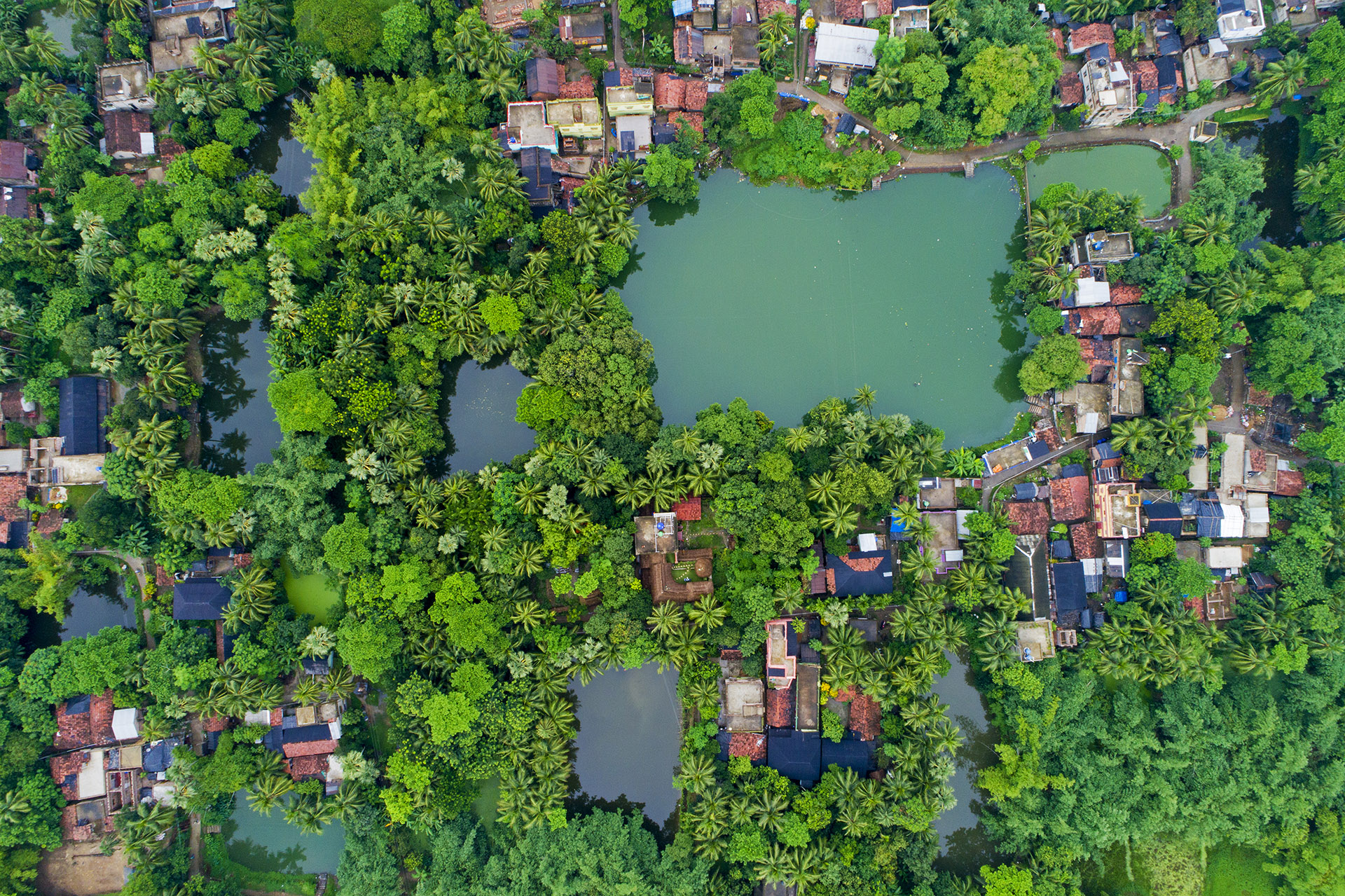 Howrah district lies on the western bank of the River Hooghly. The region is dotted with small and large waterbodies, fringed with trees and cultivated plots. The less populated parts of Howrah are wet, green, and teeming with fish ⁠— ideally suited to the fishing cat, which has inhabited these parts long before the concrete jungle took root. Photo: Dhritiman Mukherjee

Fishing cats in Howrah “have always lived in these rural landscapes,” says wildlife photographer Dhritiman Mukherjee. “but they are so stealthy, that people often don’t know they are around.” There is also some confusion between identifying fishing cats and the similarly sized jungle cats and palm civet, says Mukherjee, “so people may know that there is some wild cat around, but not which one it is.” Photo: Dhritiman Mukherjee

Part of the reason we know so little about fishing cats is because they are notoriously difficult to find. This is true of most small wild cat species in the genus Prionailurus, says Mannepuri. “It is only because of camera trapping that we are now able to monitor their movements,” he adds. Initially Mannepuri struggled to photograph the species. “But now that I am familiar with this habitat, I know their movements,” he says. Once sighted the cats are quite comfortable with human presence. “They are wary for the first five-ten minutes, but if you maintain a respectable distance, they are not bothered at all. I have followed cats for hours, sometimes from 7p.m. until dawn,” he says. Photo: Tukai Biswas 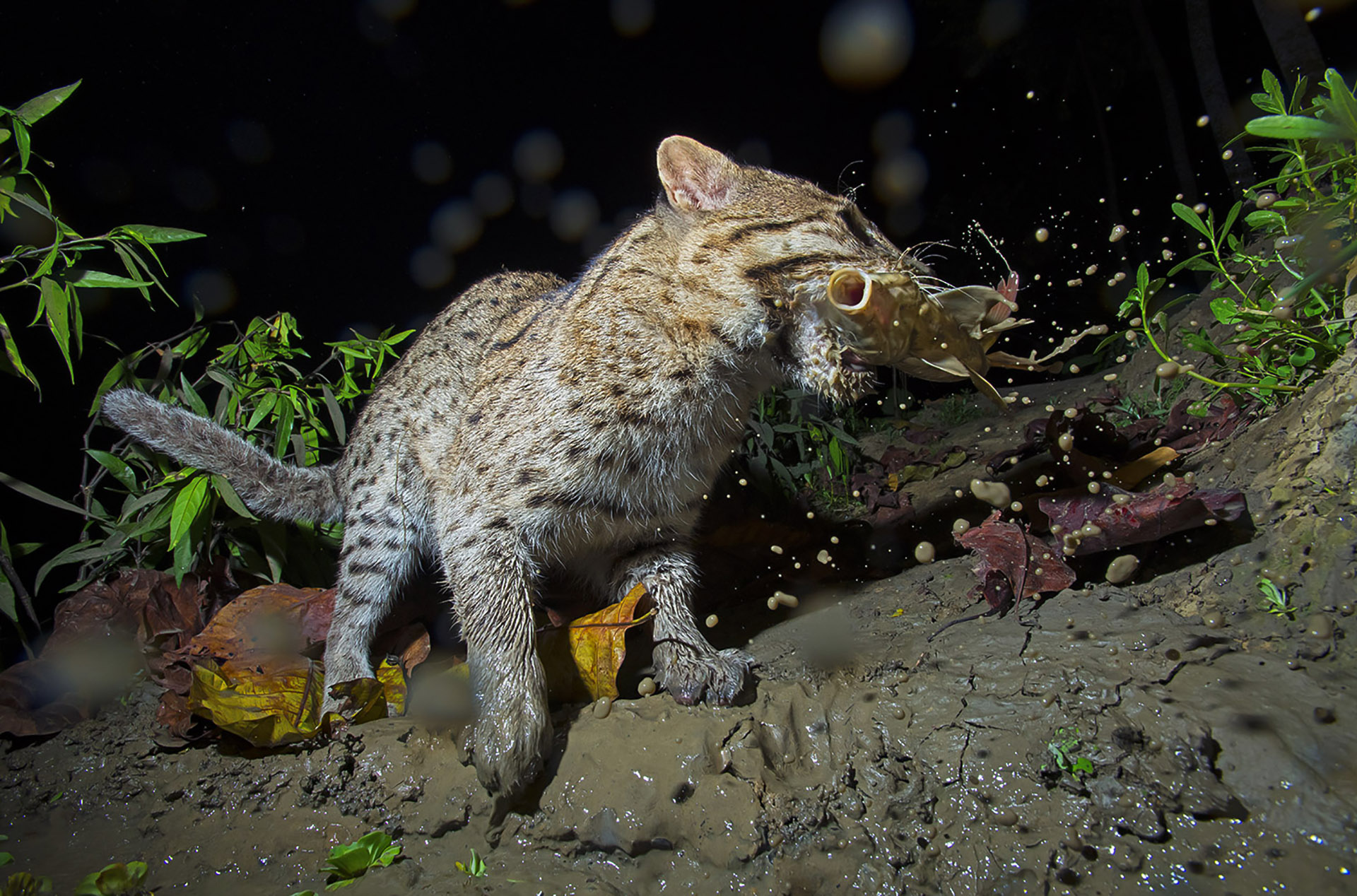 Fishermen in the Godavari delta have a practice of constructing 1-1.5 km-long nets along the coast during high tide. When the water level recedes, fish are unable to cross the net and get caught. “Often we see one or two cats in the vicinity of the nets,” says Mannepuri, “Sometimes, they take one or two fish from the nets, but the loss is minimal compared to other species in the ecosystem, like otters.” Photo: Tukai Biswas

Fishermen in Howrah tell a different tale. “There is a lot of fish cultivation in small ponds in people’s backyards, and when some fish goes missing, they blame it on the cats,” explains Dhritiman Mukherjee. “However, this perception is changing, thanks to the work of NGOs that have conducted studies to show farmers how little of their catch is actually taken by the fishing cat. Photo: Dhritiman Mukherjee 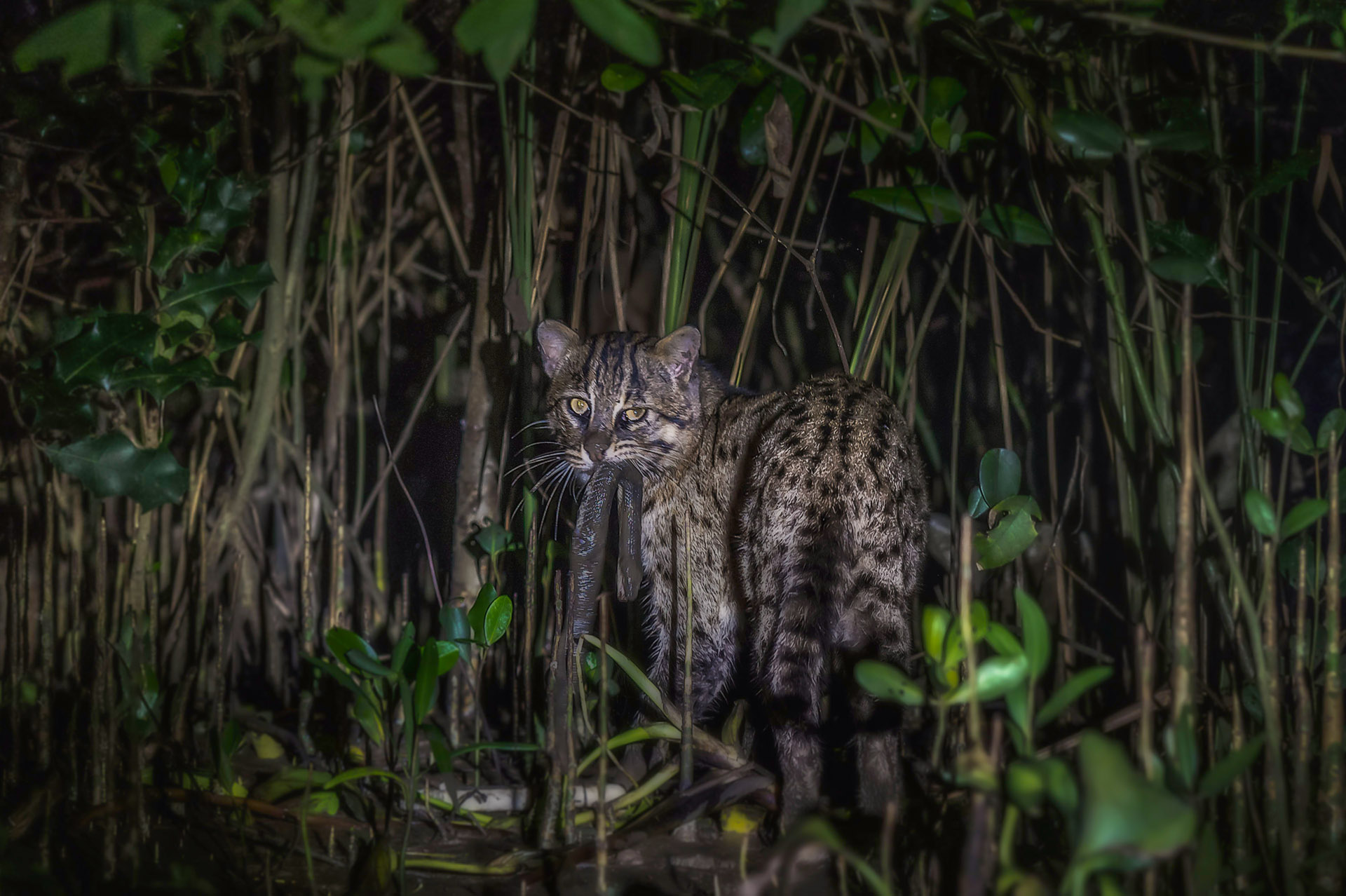 Ironically, fishing cats take a long time to hunt. “Yes, they can swim, but they are not underwater hunters,” explains Mannepuri, who has observed cats waiting on the bank for two to three hours to catch a single fish. When they see suitable prey, the cats will pounce into the water. He also points out that they prefer to jump across a five-to-six-foot stretch of water rather than swim through it. Photo: Pallavi Laveti

Mangrove forests provide numerous ecosystem services. Their immense root systems reduce soil erosion, and protect the coast from weather events like cyclones and hurricanes. And yet, large swathes of this habitat have been classified as wasteland by the government’s Ministry of Rural Development. To protect the fishing cat — and ourselves in the long run — it is imperative to protect its habitat. At the end of the day, we are all in this together. Photo: Tukai Biswas