When the Big Flood Came to Kaziranga

In 2017, a particularly devastating flood inundated Kaziranga National Park, testing the survival skills of its many animals, and causing much death and destruction. This is a rare, close encounter with that flooding event

Since the late 1990s, KK Dwivedi, former Commissioner and Secretary of Environment and Forest in Assam, has visited Kaziranga National Park over a hundred times. Yet, nothing prepared him for what he would witness during the 2017 floods — the worst Assam had seen since 1988. “You could see only water till the horizon, there was no land in sight,” he says. “Animals, afraid and desperate, were behaving most unexpectedly — we saw a monitor lizard feeding on a carcass of a wild water buffalo. We saw a rhino, usually a solitary animal, huddled with a herd of wild water buffaloes on a tiny island. I have never seen anything like it.”

Kaziranga National Park, a UNESCO World Heritage Site that is famous for hosting the world’s largest population of greater one-horned rhinos, lies in the floodplains of the river Brahmaputra. Every monsoon the river overflows and submerges approximately two-thirds (66 per cent) of the park. However, the flood of 2017 inundated over 85 per cent of the park, testing the survival skills of its animals and killing over 350 of them.

While the park remained closed to visitors and the media, Dwivedi, who was responsible for monitoring the situation, had complete access. He lugged his camera on most supervision trips and rescue operations, traveling to the worst-affected areas, and shooting from narrow, rocking speedboats, often in torrential rain. “Rhinos, tigers, elephants, and reptiles were swimming all around our boats, and we had very little protection,” he says. The images he shares here, offer an extremely rare glimpse of what the park looks like in the face of its worst adversity. 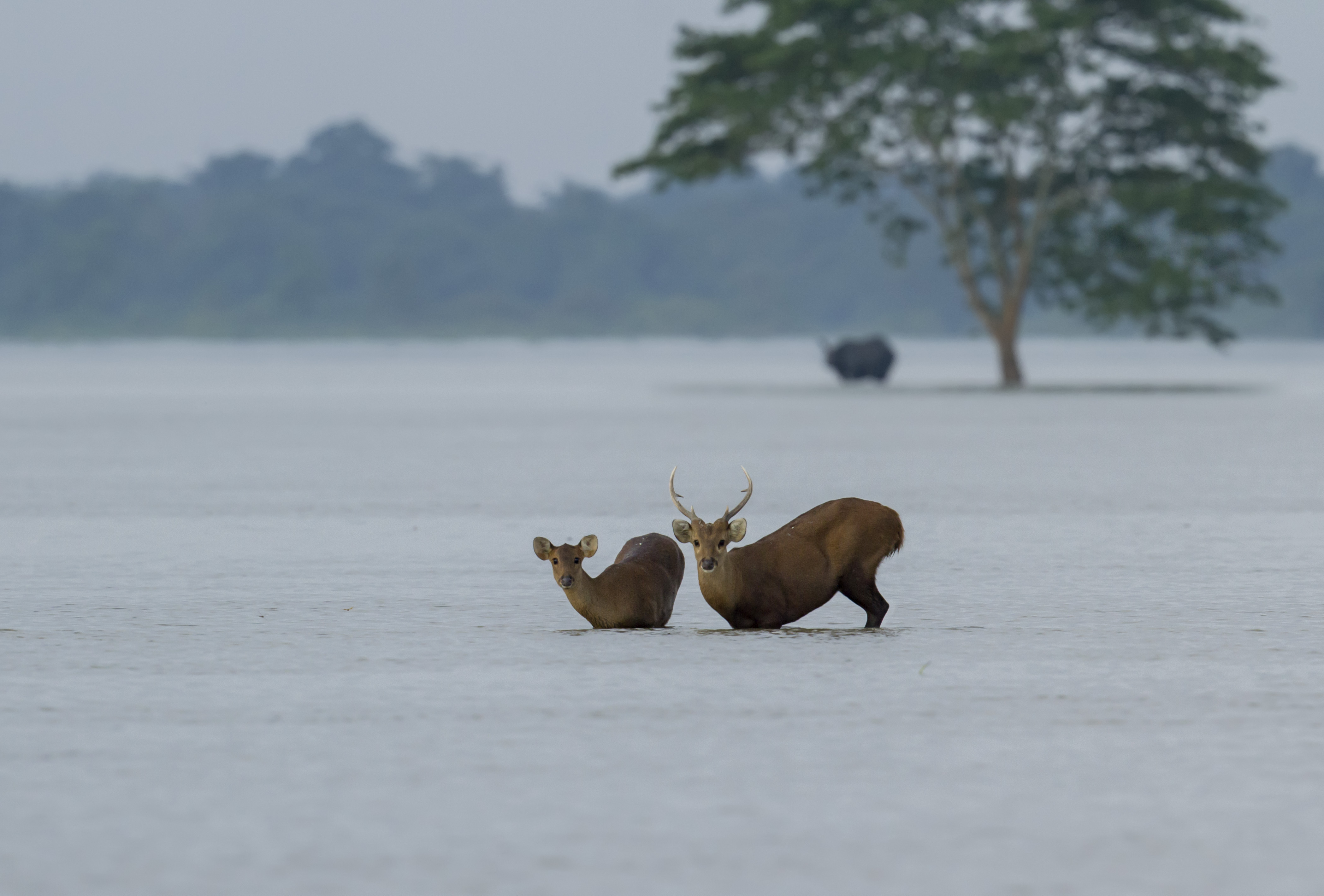 The floods of 2017 in Kaziranga were among the worst Assam has ever seen. The first wave in July claimed the lives of over one hundred animals and submerged two-thirds of the park. Only a couple of weeks later, while the park was still recovering, it was hit by another, deadlier spell. The flooding in August submerged 90 per cent of the park, pushing the recorded animal death toll to 350. The flood also drowned forest supervision posts, making patrolling the park during an extremely vulnerable period, even harder. “Animals are helpless, and rhinos who are in great demand for their horns, become easy targets for poachers. Patrolling the park in boats, despite the risks involved, becomes extremely important. We cannot lower our guard,” says Dwivedi. 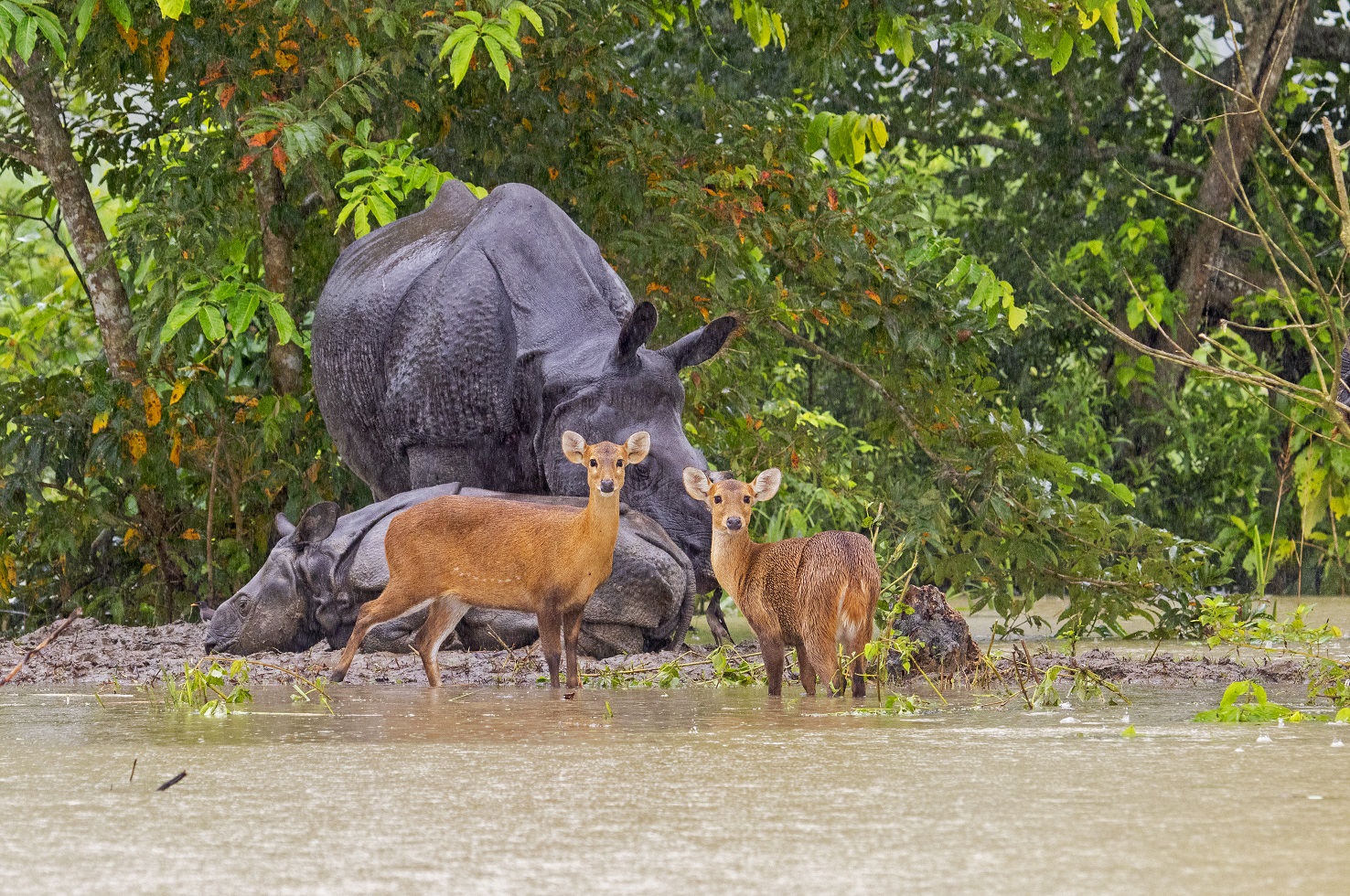 Official records claim 15 rhinos, 185 deer, and one tiger died in the 2017 floods. However, Dwivedi claims that “The actual number could surpass 400 to 500.” Plus, “We don’t have a count of how many butterflies, insects, or reptiles perish during floods because it is hard to find their carcasses,” he says.

For Dwivedi, the calamity revealed what happens to a peaceful landscape under great distress. Perhaps the rarest sight was of stubbornly territorial animals huddled on crammed, fast-submerging islands. Rhinos are solitary creatures who only come together to mate. Elephants live in tightly-knit, protective herds. “A disaster alters animal behavior. You see them do extremely uncharacteristic things,” says Dwivedi. “For example, I have never seen elephants, rhinos, deer, and wild water buffalo standing so close to each other. We could sense their fear.” 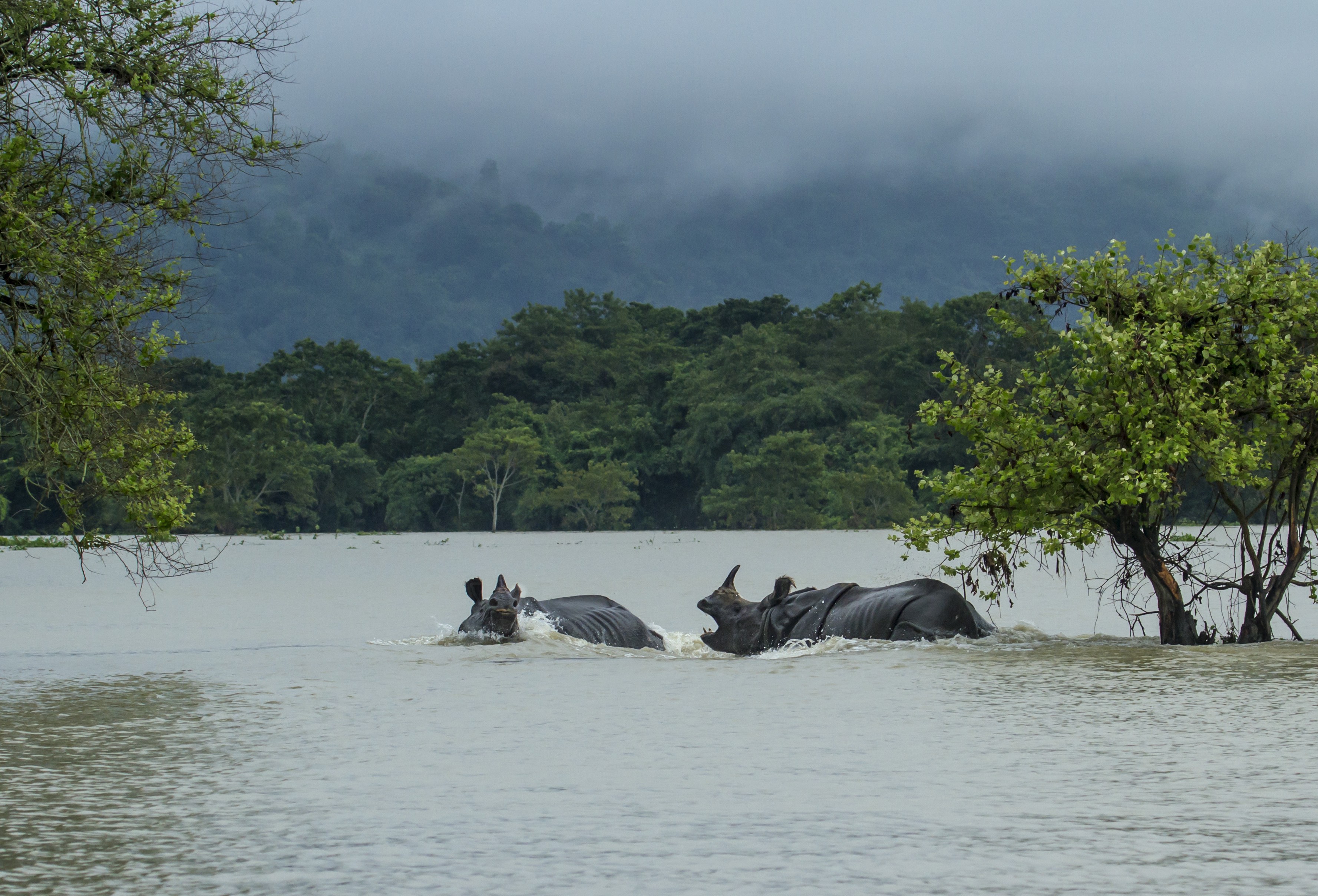 On a dark, cloudy day, Dwivedi and his team encountered two rhinos, submerged in water, locked in a ferocious battle. “I can still see the anger on their faces. It was terrifying to watch,” he says. A submerged park not only puts most animals at great risk of drowning, but also severely reduces food resources. “Fights break out easily since many of these animals are starving, stressed, and away from familiar surroundings,” says Dwivedi.

The director of the park, a forest guard, and Dwivedi were patrolling the park on a narrow speedboat when they spotted a hog deer stuck in a thorny bush. As they approached it, the animal struggled violently. “On a regular day, an animal will never allow us to come this close. It was both afraid of drowning, and the boat approaching it,” says Dwivedi. The rescue team pulled out the hog deer and wrapped its head with a gamusa, a white and red traditional Assamese towel to keep it calm. Next, they rushed it to a rescue centre where it was treated and eventually released into the park. Hog deer suffered the biggest casualty during the flood — 282 died in the flood of 2017 and 14 were killed in road accidents. 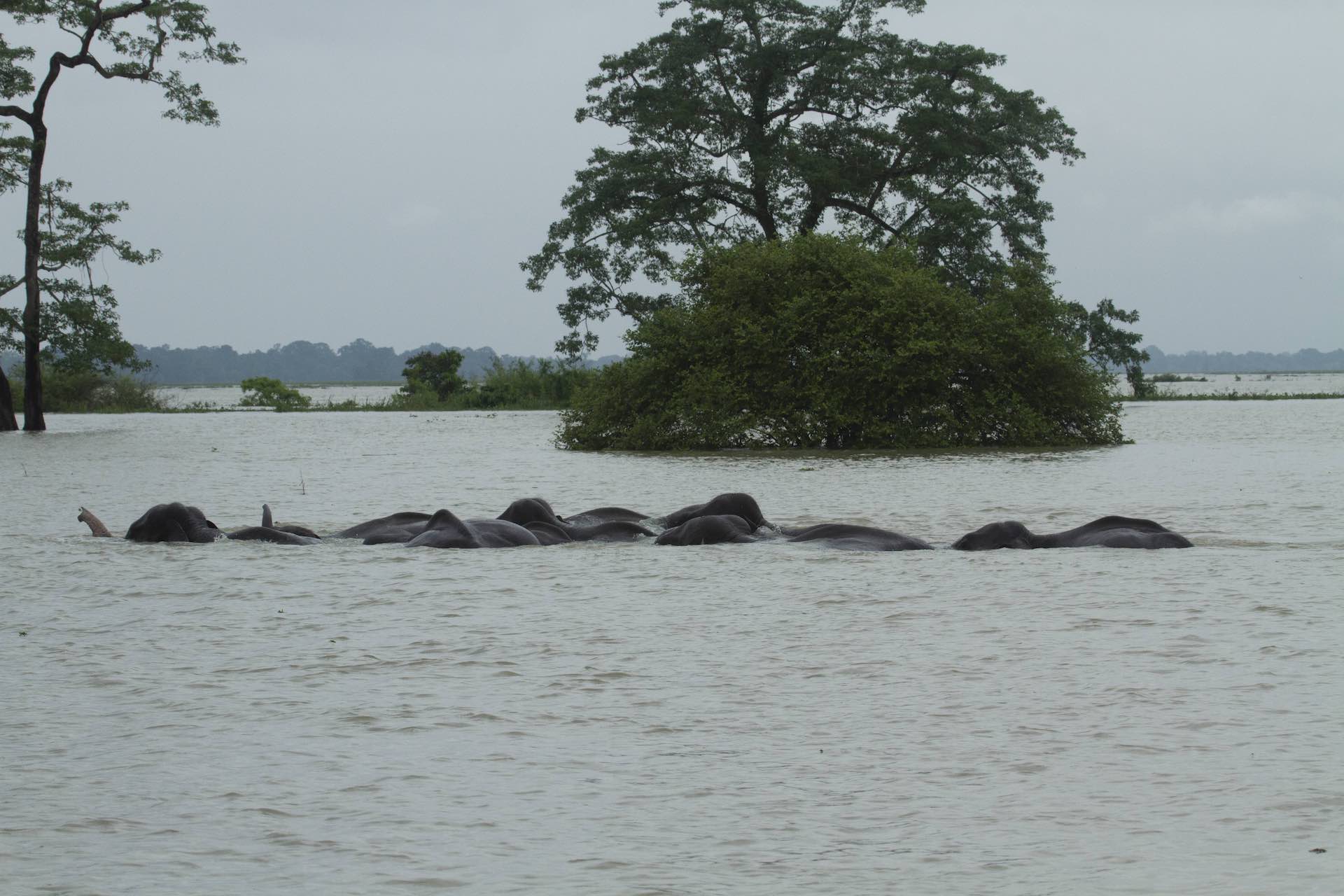 On many days of the flood, the park reverberated with the deafening cries and roars of elephant herds. Once, when Dwivedi and his team followed the screams, they came across a large, violently restless herd crammed on an island. On another, they saw a group swim through deep perilous waters — only the tip of their trunks and heads visible.

The greater adjutant stork, a stunning five-foot-tall bird, is listed as ‘endangered’ on the IUCN Red List. There are about a 1,000 living in the wild. “Imagine my surprise when I saw at least 80 together on one island!” exclaims Dwivedi. The flood severely diminished their habitat, forcing large numbers onto the available land.

When floods take over Kaziranga National Park, the animals move southwards towards the hills of Karbi Anglong Hills for shelter. Unfortunately, to get there, they are forced to cross NH37, brave speeding vehicles on the highway that cuts through the landscape. Sometimes animals get lost in tea plantations and villages along the highway causing human-wildlife conflict. “I photographed this rhino leaving a terrified man’s home. Managing human-animal conflict during the flood is one of the toughest jobs of the forest department. Sometimes animals just pass through, but last year a wild boar found its way into a local village during the floods and ended up killing one man,” says Dwivedi. 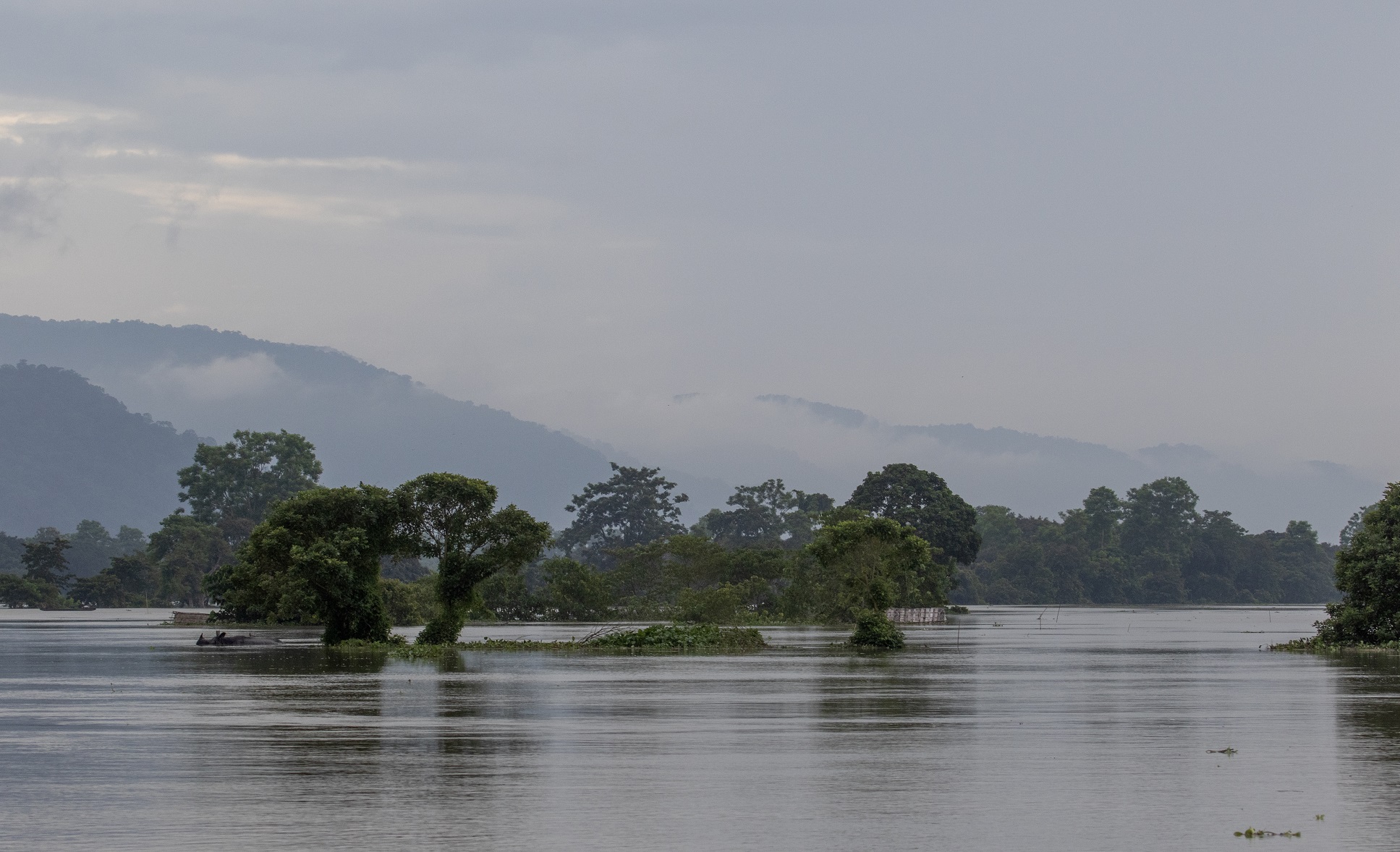 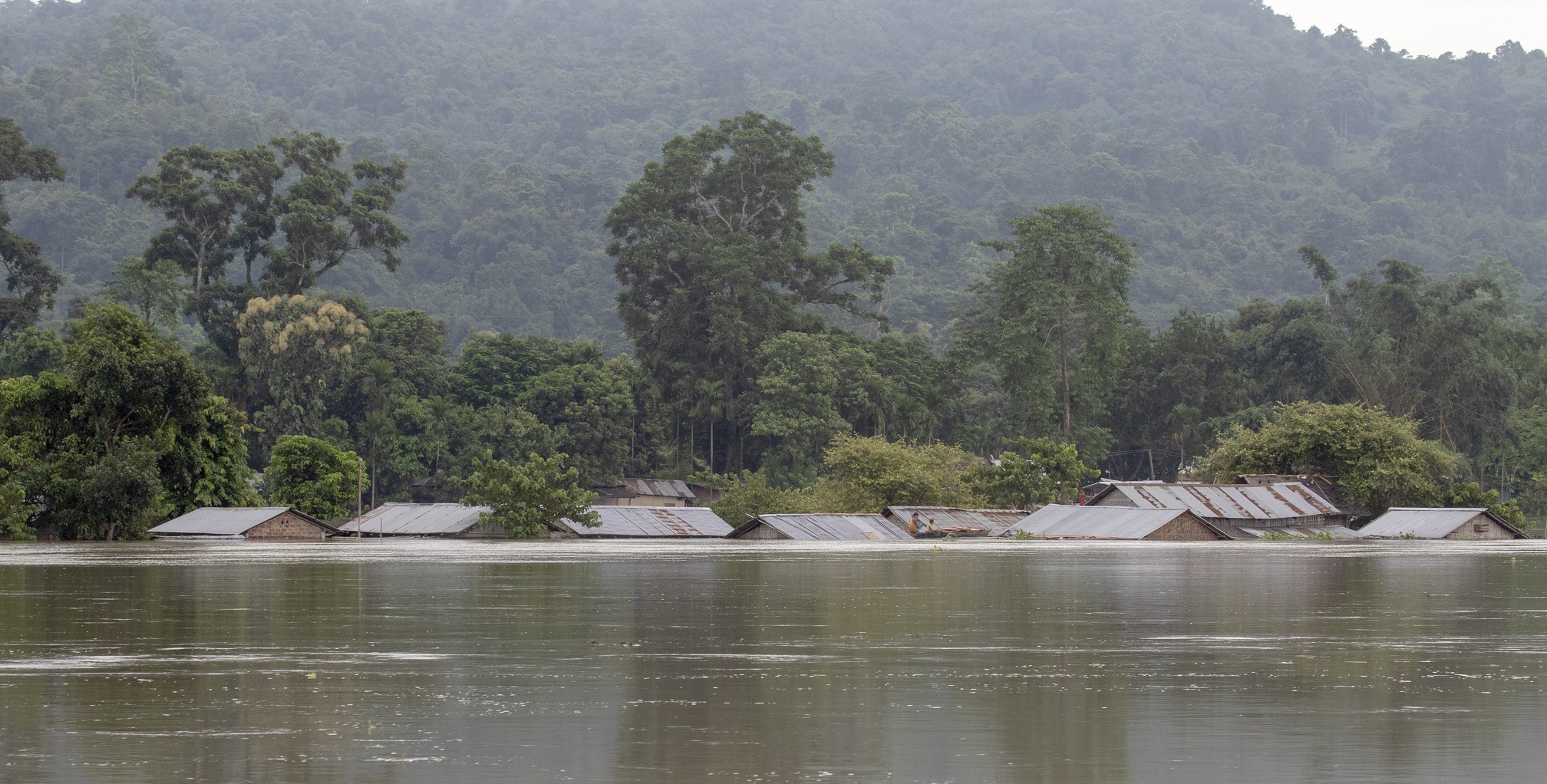 Animals are not the only ones that suffered the floods. Communities that live on the fringes of the park have to be evacuated and moved to relief camps in nearby towns. Despite a rising toll of animal deaths and large-scale human and animal devastation, there is nothing unusual about the floods in Kaziranga National Park. The flood is an annual occurrence. While it puts the lives of several hundred animals at great risk, it rejuvenates and replenishes the swampy grassland. “I have never seen anything like Kaziranga National Park — it has extremely rich biodiversity,” says Dwivedi. “But strategic policy interventions to mitigate the flood are necessary.”