What Lies Beneath: Inside the Freezing Waters of Antarctica 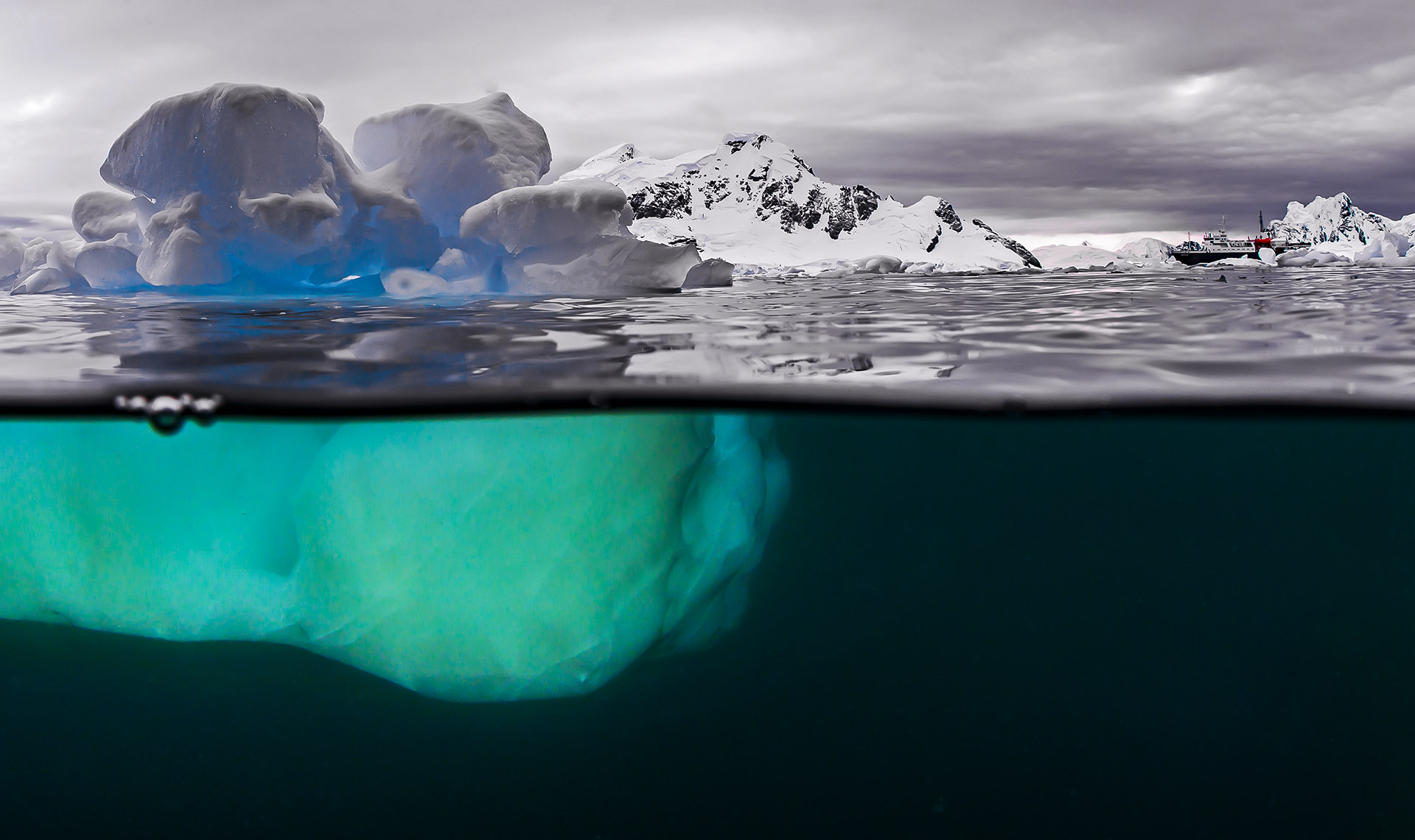 When we think of Antarctica, most of us envision colossal icebergs, fleets of penguins, and frisky seals leaping in and out of the water. We imagine pristine white snow, towering mountains, and oceans dotted with hunks of ice, like floats in a parade. But we know precious little about the marine life that lives in these extreme waters. Curious to understand this habitat, wildlife photographer Dhritiman Mukherjee spent two weeks in the Antarctic Peninsula, diving into the waters around its many islands and photographing its lesser known inhabitants.

Everything is constantly moving. The icebergs move, the sea ice moves, so in a sense the landscape is always changing. It’s confusing because you have no landmarks.

Diving around icebergs is always a challenge. Divers have to carry heavy gear, combat extreme temperatures, and deal with equipment far more technical than that required by regular dives. Diving in Antarctica is a whole other ball game. “Everything is constantly moving,” explains Dhritiman. “The icebergs move, the sea ice moves, so in a sense the landscape is always changing. It’s confusing because you have no landmarks, but also hazardous because you have to constantly watch out for breakaway chunks of ice large enough to crush you.”

Add to this, the shifting density of the water. Ice in Antarctica is largely of two types: Icebergs formed from fresh water, and sea ice formed when saline ocean water freezes. They both have different densities, which affects the buoyancy of the diver. If you aren’t mindful, you could drop several feet, or whoosh up to the surface when you approach these ice forms.

For all these reasons, polar diving requires plenty of experience. Before breaking the ice in Antarctica, Dhritiman went ice diving in the Arctic Ocean to photograph orcas, and in Baikal Lake in Siberia where he documented the Nerpa seals endemic to the region. Still, he says, diving in the Antarctic Peninsula was his most trying underwater experience.

It was also his most surprising. “There is a very unique diversity of fauna here,” he says. “Each animal has evolved in very special ways, to combat the extreme habitat.” Seals have layers of blubber to protect them from the cold, fish like the Notothenid have specialised proteins that prevent their body tissue from freezing, while anemone like the Edwardsiella andrillae, are able to live attached to ice. As Dhritiman says, “It’s really quite fascinating.”

On dive days, the crew would hop on an inflatable boat and make their way into the ocean. “There are no designated dive spots here,” says Dhritiman. “You simply jump in and hope for the best.”

Sculpted by the wind, the ice takes on exquisite forms, both above and below the surface. The icebergs are titanic in size, often spanning several square kilometres, and dwarfing the ship as seen in this image.

About ten metres below the surface, the landscape changes significantly. On vertical rock slopes and crevices between the rock, colourful marine life thrives amidst moss and kelp. The most abundant of these are starfish, anemones, and nudibranchs.

There are over 35 species of starfish in the oceans around Antarctica. The most striking of these, is the Labidiaster annulatus, which spans over two feet. Unlike most other sea stars that have five rays, the sunshine-yellow labidaster has over 50 spindly rays, which it uses to catch and consume small fish. 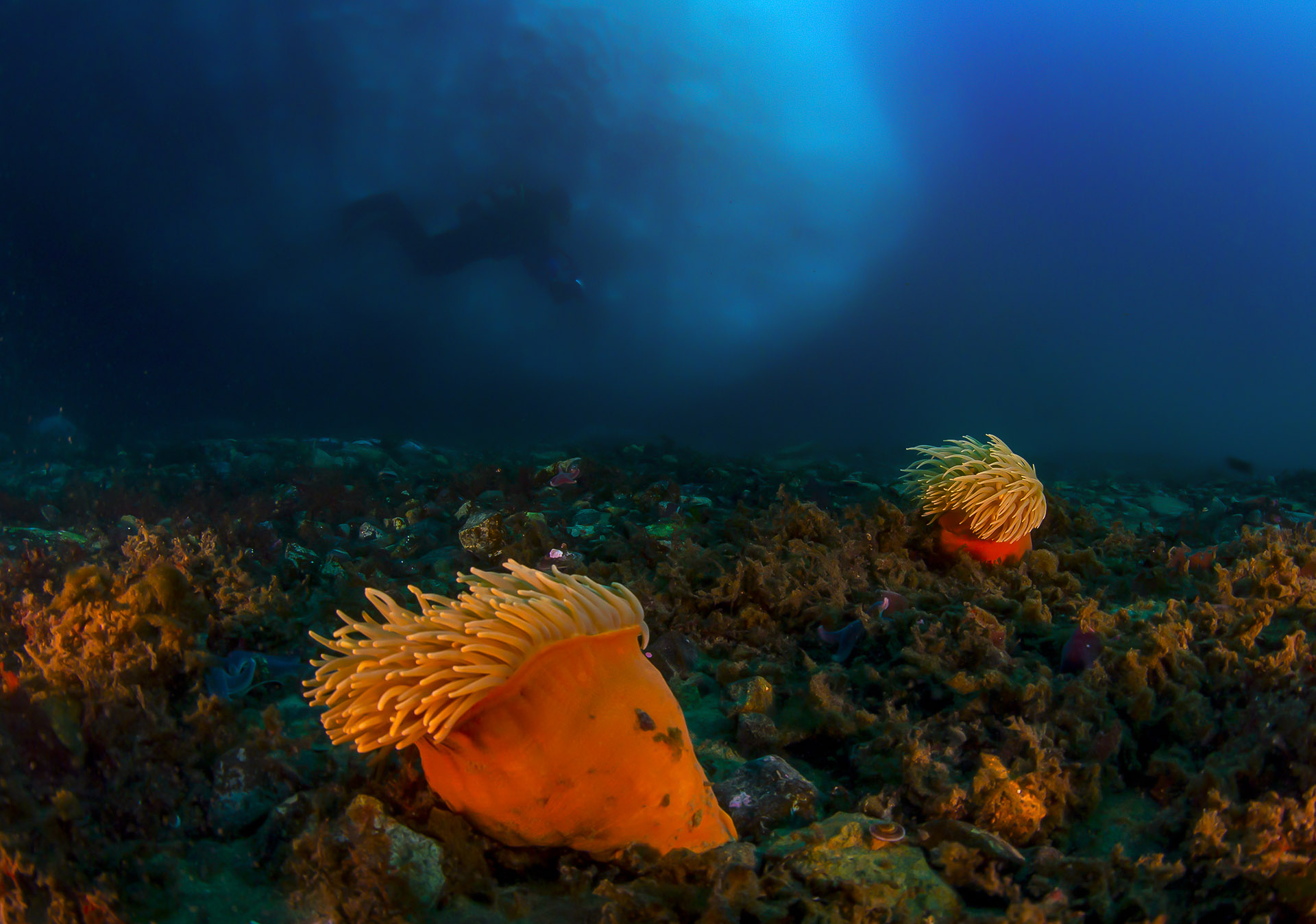 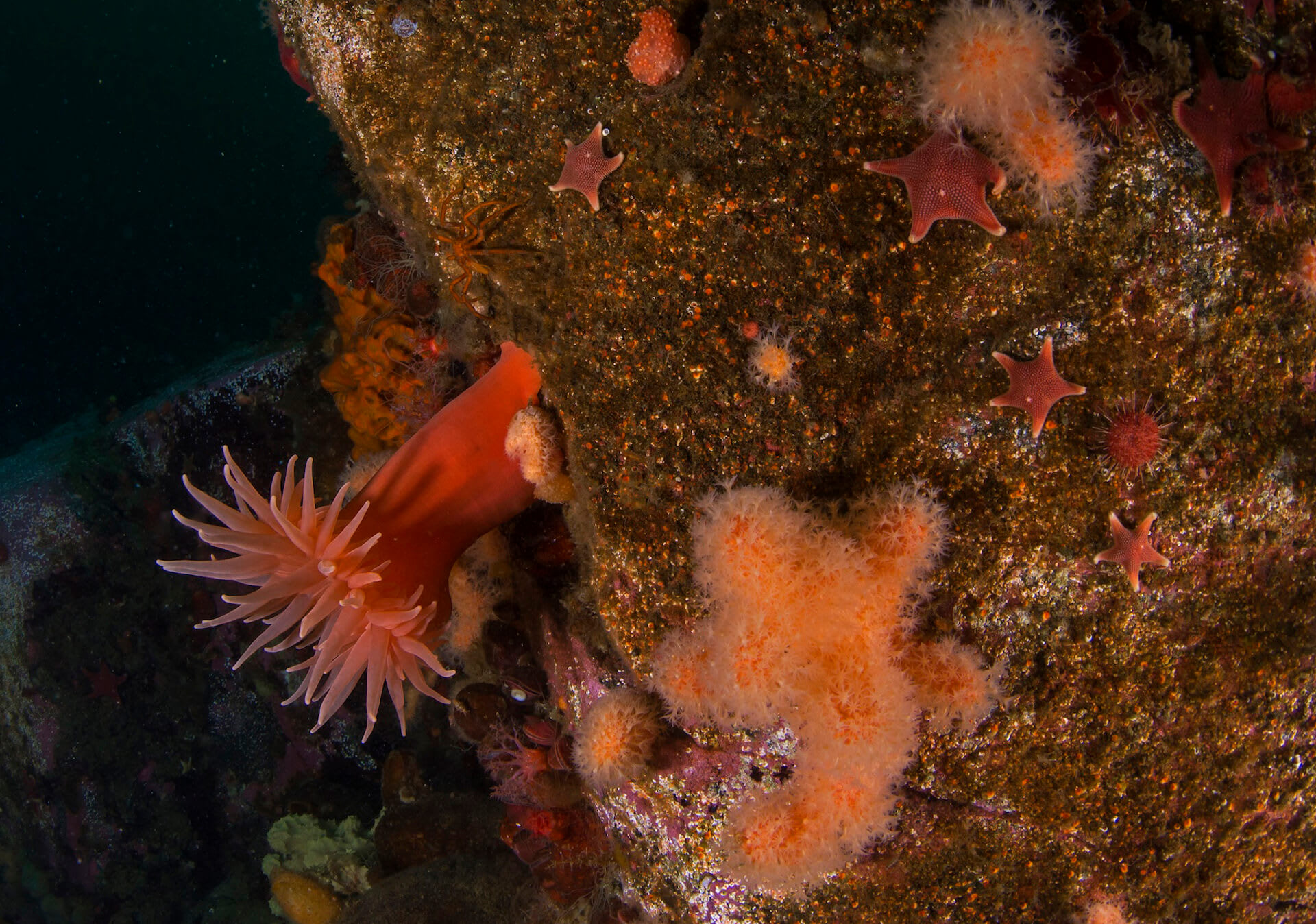 Contrary to their floral appearance, anemones are marine predators that use their tentacles to ensnare prey. They are sighted frequently underwater, their feelers moving gracefully with the ocean current. 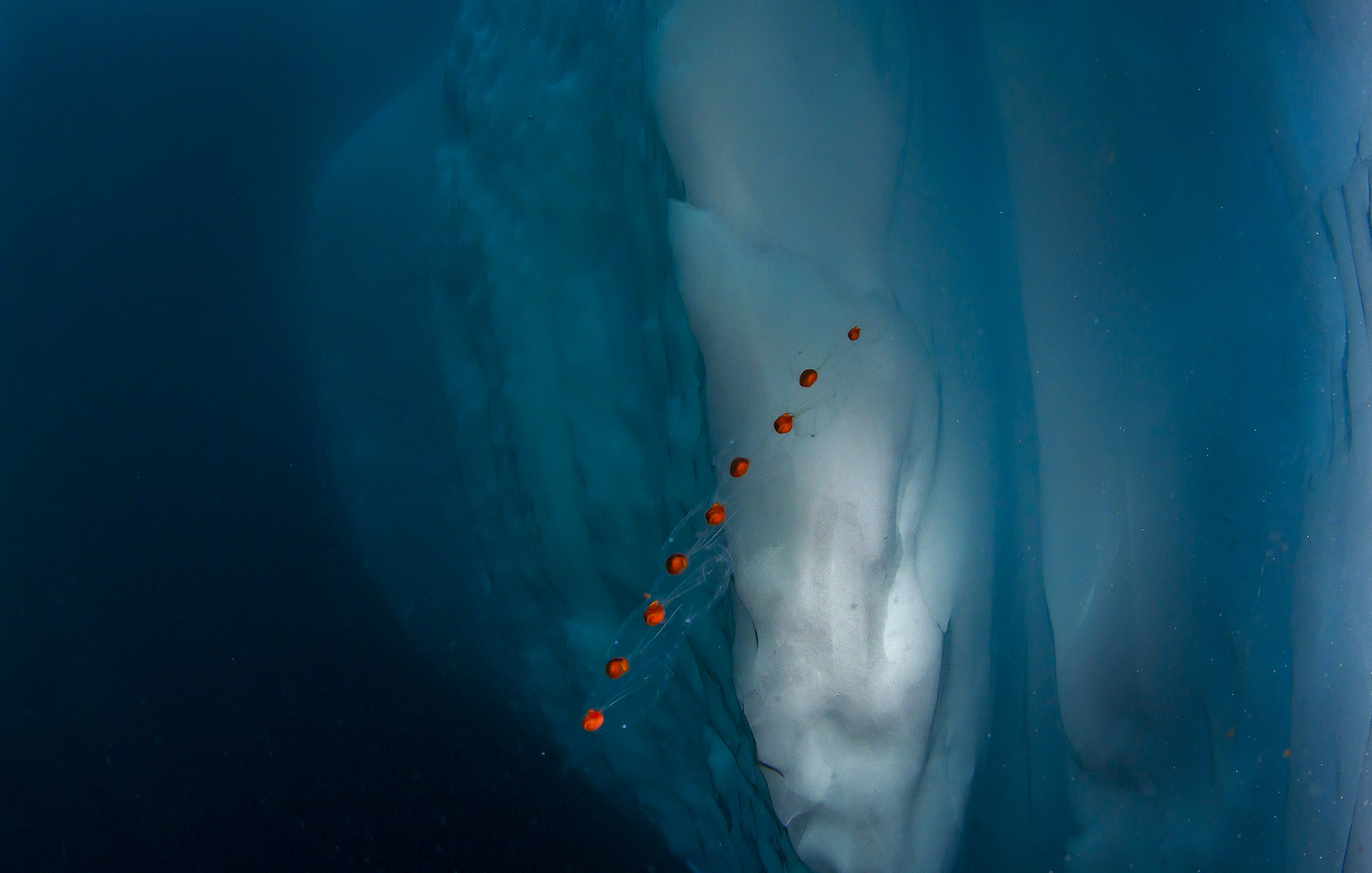 Matching in elegance is the salp: tubular, gelatinous sea creatures that are somewhat similar to jellyfish in appearance. Salpa move by pumping water through their barrel-shaped bodies. They are constantly straining the ocean water for algae cells, which they consume for energy.

Swimmers come in all shapes, sizes, and temperaments in the Antarctic. Crabeater seals are curious and playful, and are found abundantly in the waters around Antarctica. Contrary to what their name suggests, crabeater seals eat mostly krill, which are small, shrimp-like creatures. 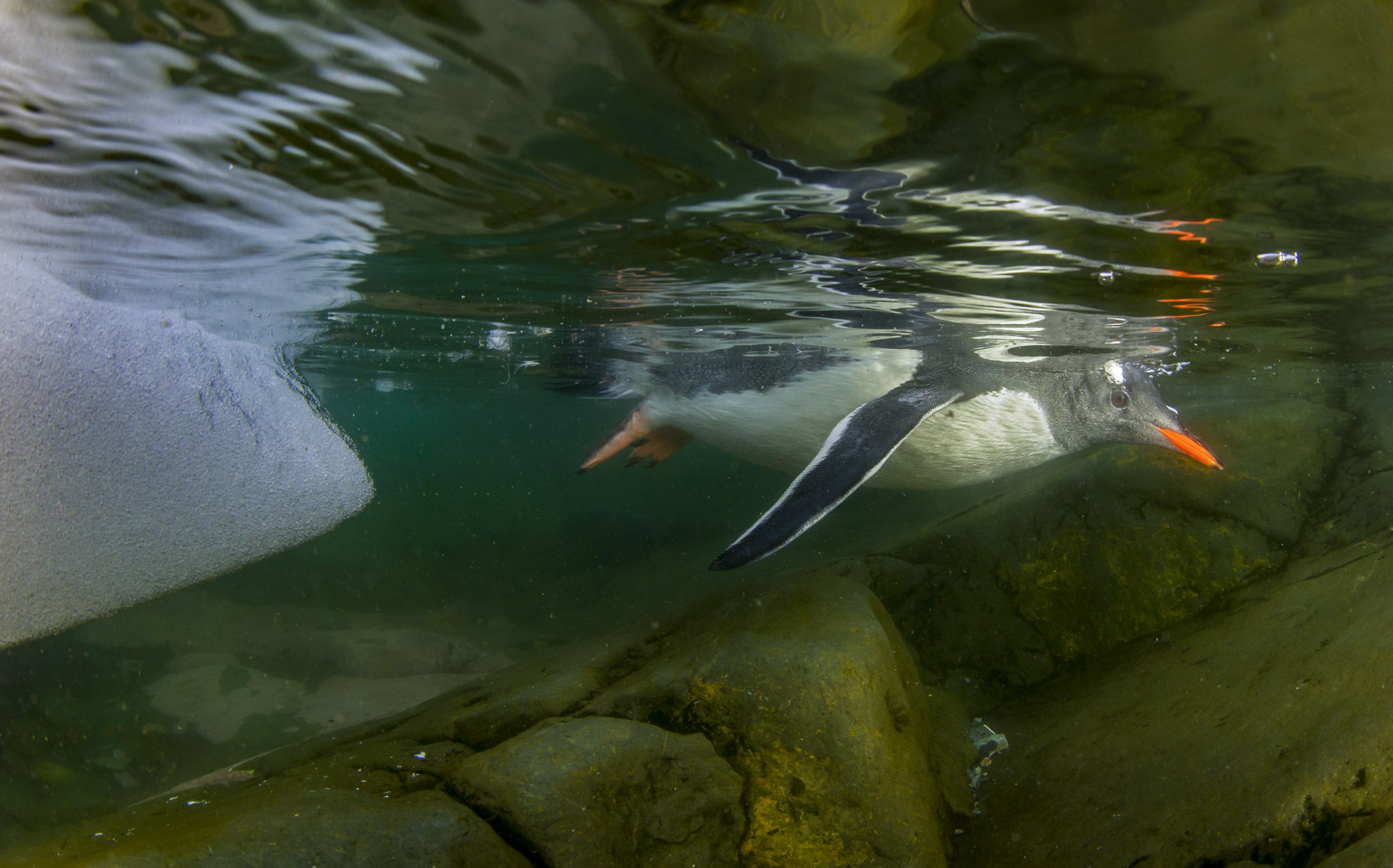 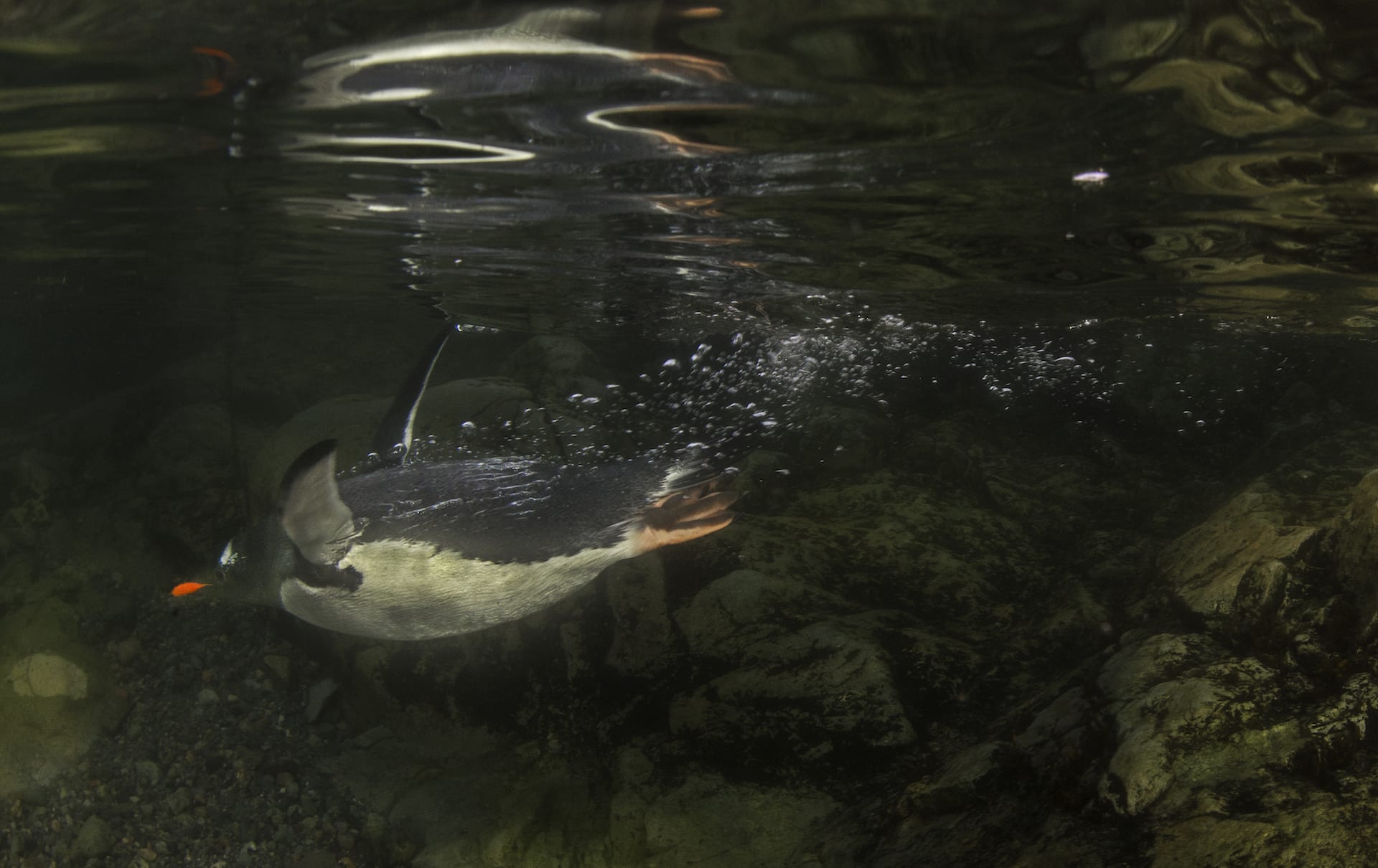 Just as affable, is the gentoo, one of four types of penguins on the Antarctic Peninsula. Gentoos are strong and fast swimmers, making them especially hard to shoot underwater. 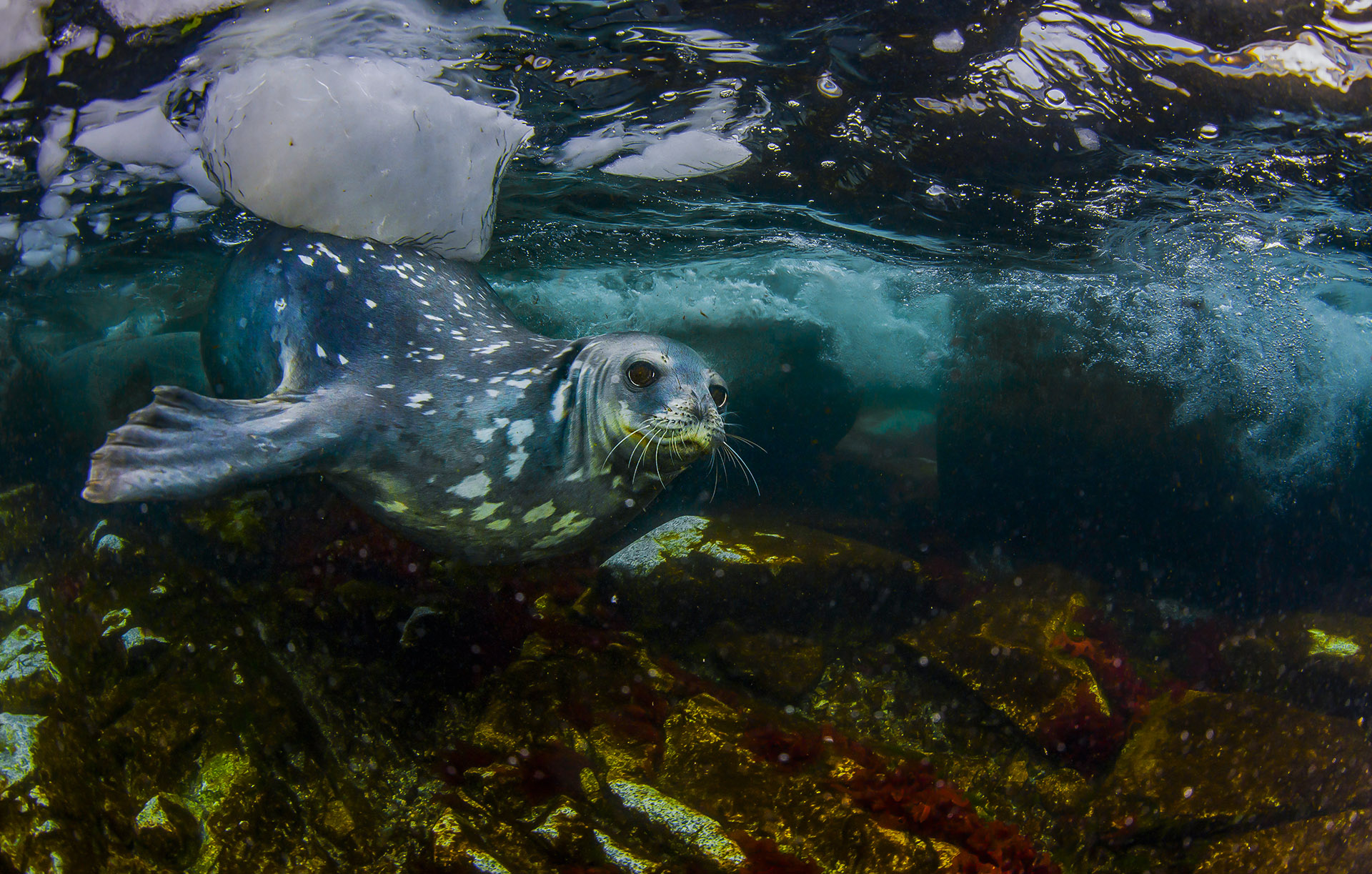 The strongest swimmer in the region is the Weddell seal, which can dive down 600 metres for food. Hunting at this depth gives them access to cod icefish (their favourite seafood) and keeps them clear of predators such as the leopard seal, which are known to hunt other seals.

FROM THE FIELD: Dhritiman Mukherjee in full gear: thermals, dry suit, gloves, face mask, air tanks, camera, and strobe lights. In addition, he is also carrying 17 kilos of lead weights on his belt, to counter the additional buoyancy from the gear.