Usually perched on the upper branches of tall trees, these squirrels are the quintessential charmers of the forest canopy

Squirrels have been around on Earth for around 30-40 million years, and around 200 species have been identified worldwide. Endearingly inquisitive and remarkably agile, they come in various forms. Tree squirrels, ground squirrels, chipmunks, marmots, flying squirrels, prairie dogs — all of them present in the wild on every continent except Antarctica and Australia.

Giant squirrels are among the largest squirrels in the world. These arboreal creatures prefer habitats with contiguous forest patches, tall trees, and canopy connectivity, which protect them from predators and provide an ample supply of food. In fact, they rarely descend from the forest canopy. Despite their high perch they serve as prey for raptors and sometimes even large carnivores such as leopards and clouded leopards and primates such as lion-tailed macaques.

Giant squirrels weigh between 1.5 and 3 kilos, and have tails that are as long as their bodies, measuring 25-46 cm. Just like other members of the order Rodentia, they are endowed with two front teeth that continue to grow throughout their lives. They primarily feed on fruits, flowers, seeds, leaves, bark, and occasionally insects and bird eggs too.

Scientists don’t know why these mostly solitary giant squirrels evolved to be larger than their squirrel cousins. Biologist Nandini Rajamani suggests their larger size might enable them to access different kinds of food from different storeys of the forest.

Destruction and fragmentation of their forest habitats, along with hunting, are major threats to the survival of giant squirrels.

The Indian giant squirrel (also called Malabar giant squirrel) is found only in India. This squirrel is easily encountered across the Western Ghats and parts of the Eastern Ghats and Satpura ranges. It is the state animal of Maharashtra where it is called “shekru” in Marathi. Burgundy, maroon, black, cream – the fur of the Indian giant squirrel varies according to where it occurs, and from one individual to another in the same location. “We visited a couple of sites and looked at many Indian giant squirrels in those sites. We found high variability in their coat colouration within these sites,” says Rajamani. Her Sciurid Lab project uses published images from across the animal’s range to describe the colour variations and morphs of these giant squirrels. “Indian giant squirrels that you see as you go further south in India tend to be darker, with a lot of black fur on their backs. You don’t see such dark individuals as much in northern Maharashtra. Even within a site, like the Anaimalais, fur colour can vary from one individual to another,” she adds. Photo: Soumabrata Moulick Cover photo: Saurabh Sawant 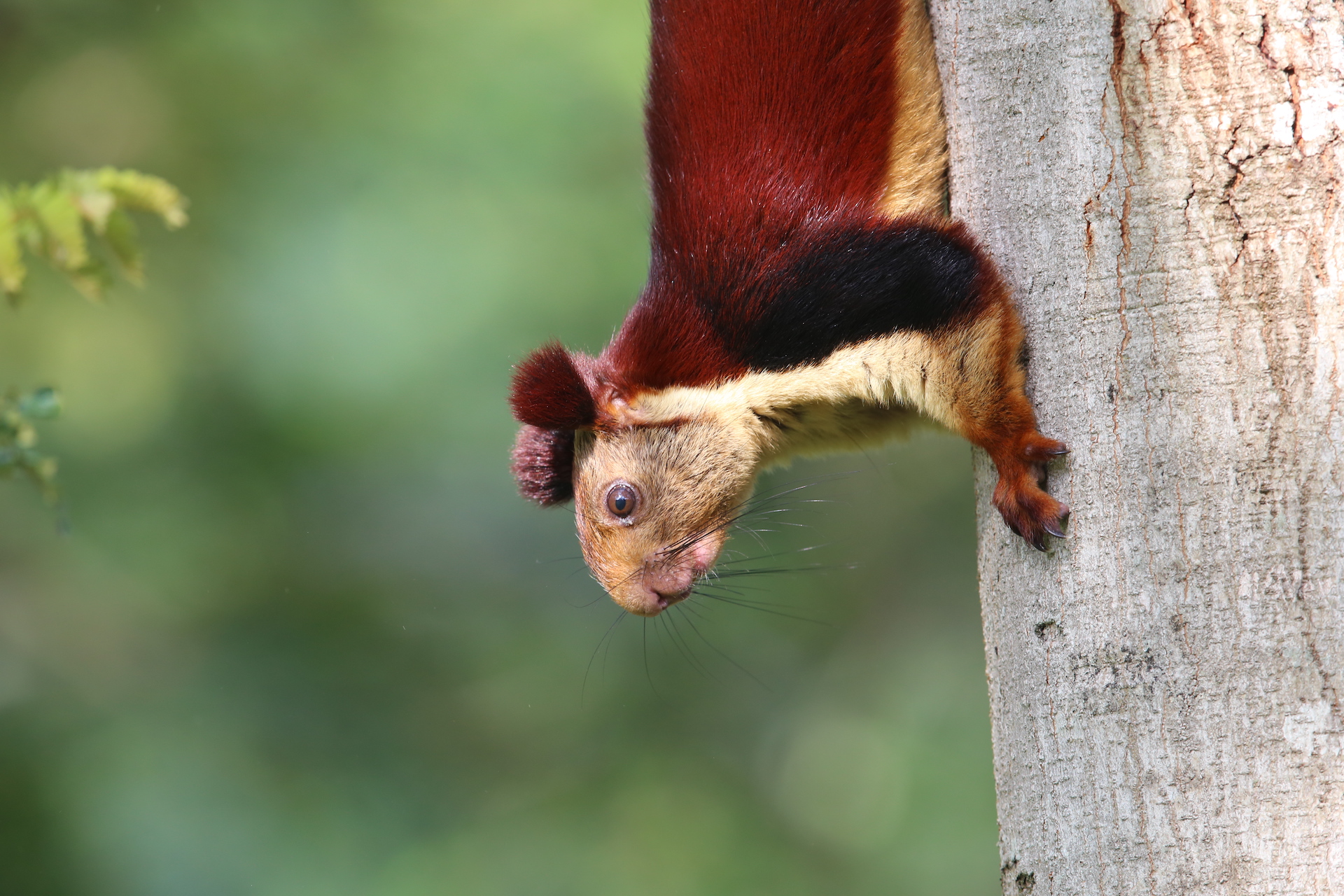 The Indian giant squirrel makes a series of high-pitched and staccato chirrups, which carry over long distances in the forest. Rajamani, whose lab is studying their acoustics, likens them to the sound of toy machine guns. “It sounds extra loud, given the size of the animal. There is no other sound in the forest quite like it,” she says. “We have recorded around six to seven different types of calls made by Indian giant squirrels,” she adds. Photo: Surya Ramachandran 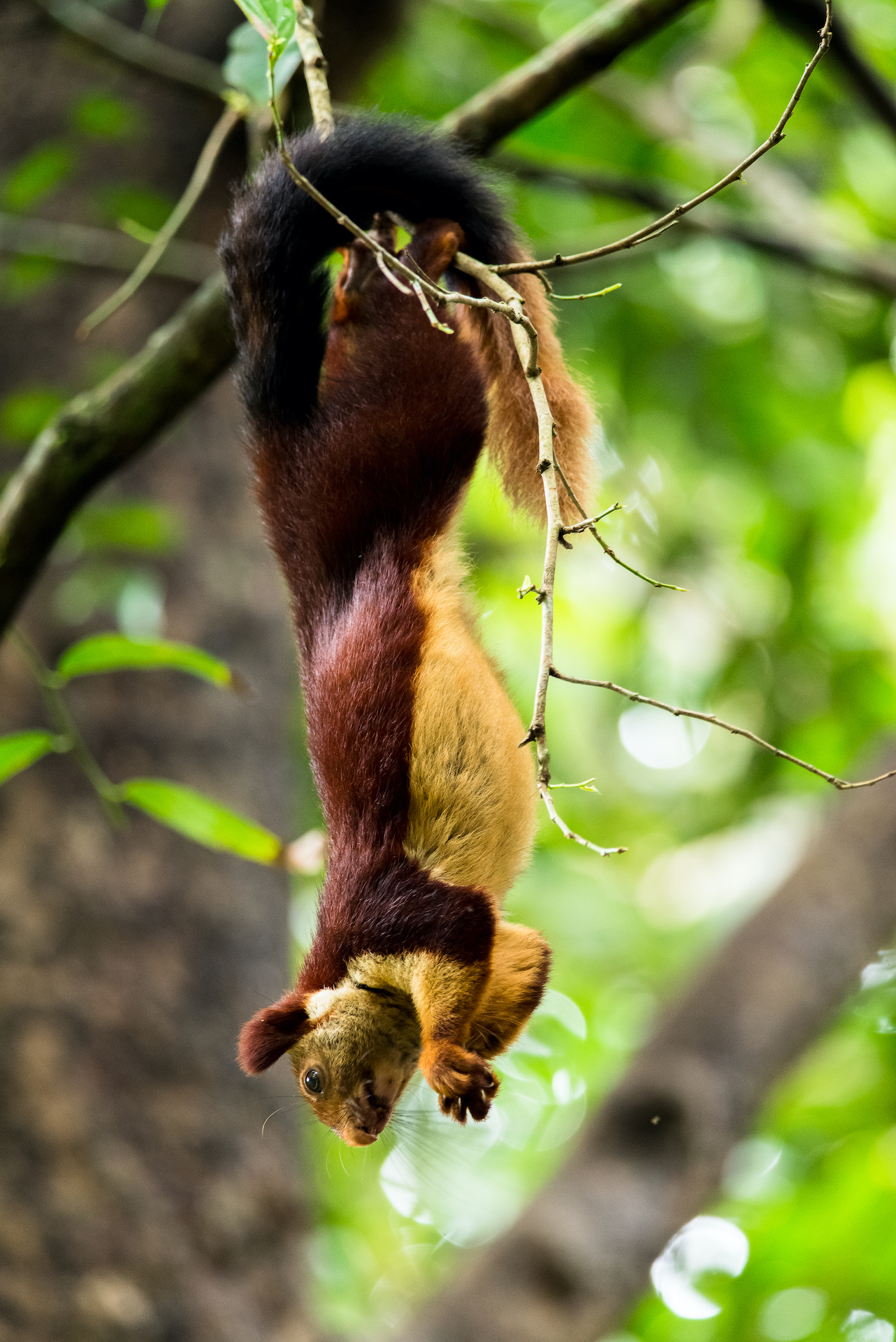 An acrobatic climber, the Indian giant squirrel will often hang by its hindlegs and use its tail for balance while feeding. Though these squirrels are naturally shy and wary, they can become habituated to humans and take food offered by them. “Indian giant squirrels can be seen taking food from the hands of pilgrims trekking up the forest trail to the Tirumala temple in Andhra Pradesh. This has also been reported from other locations,” says Rajamani. Photo: Manojiritty, CC BY-SA 4.0

Black giant squirrels or Malayan giant squirrels live in Northeast India. They have black or dark brown upper parts and buff underparts. Like other giant squirrels, they are solitary animals but can be seen in pairs or groups during the breeding season when they build large spherical nests, of leaves and twigs, in which to raise their young. Photo: Surya Ramachandran 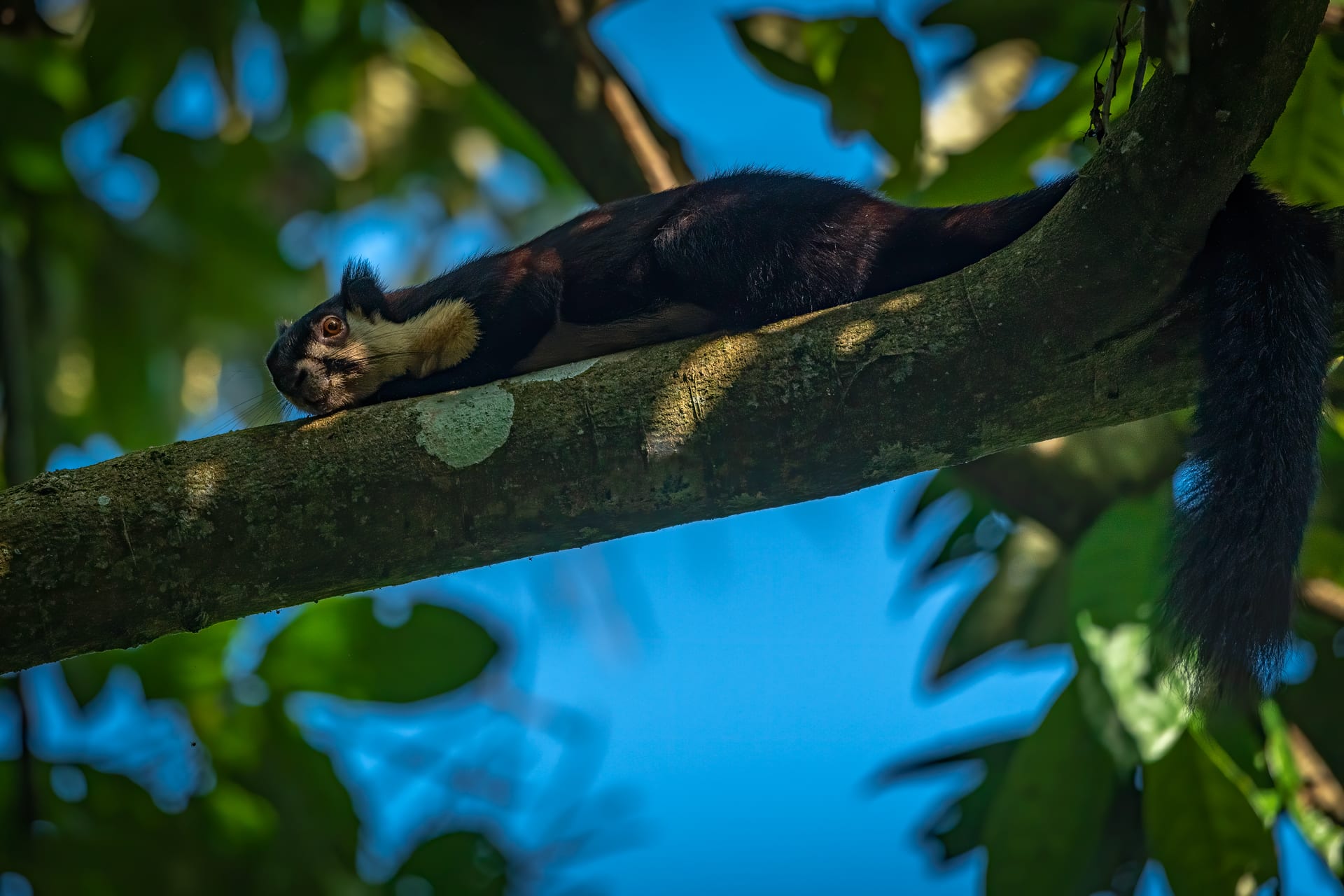 Black giant squirrels are most active during the morning and evening. They are often observed resting comfortably on a branch in the afternoon. Black and Indian giant squirrels are also known to flatten themselves against a branch and remain motionless when they spot a predator. Photo: Soumabrata Moulick 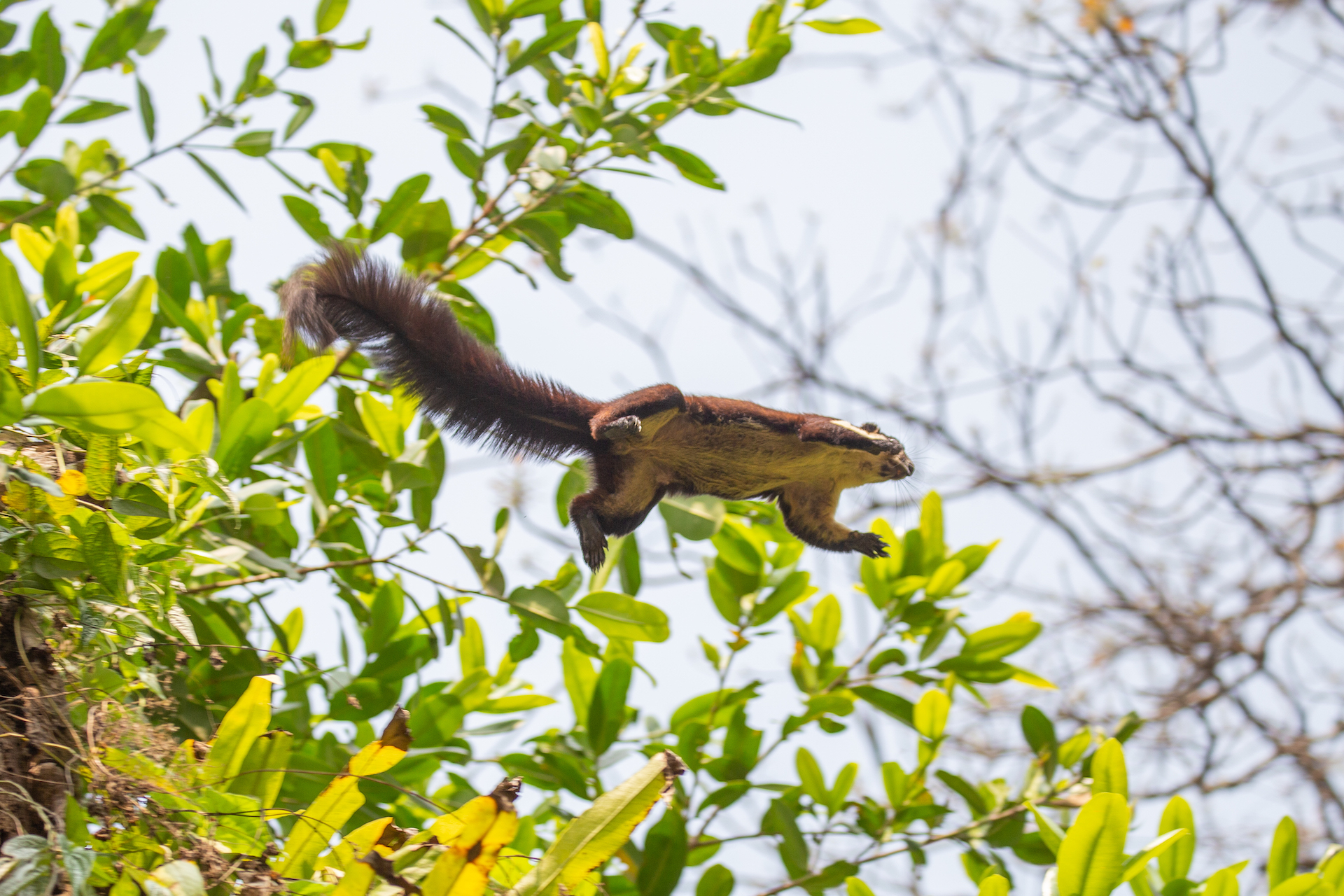 The aerodynamic tail of giant squirrels comes in handy when it leaps from one tree to another. “In many arboreal mammals, long tails help with balance as the animals move around on trees. When giant squirrels leap, you can see them twirling their tails around or moving them in certain ways, all of which might help with landing and speed,” says Rajamani. Photo: Saurabh Sawant

The black giant squirrel mainly feeds on seeds but will also supplement its diet with fruits, flowers, leaves, and bark. PS Sumashini, who tracked a pair of these squirrels in and around Assam’s Dehing Patkai Wildlife Sanctuary, writes that while they swallow small fruits whole, they bite through bigger fruits such as those of the silk cotton tree (seen here), to reach the seed, irrespective of whether they are ripe or not. Video: Soumabrata Moulick

Grizzled giant squirrels are the rarest and the smallest of the three species of giant squirrel found in India. They are only seen in fragmented patches of riverine forest in Karnataka, Tamil Nadu, and Kerala, and also in Sri Lanka. White specks of hair on a grey-brown coat lend it a grizzled appearance. Photo: Shreeram MV 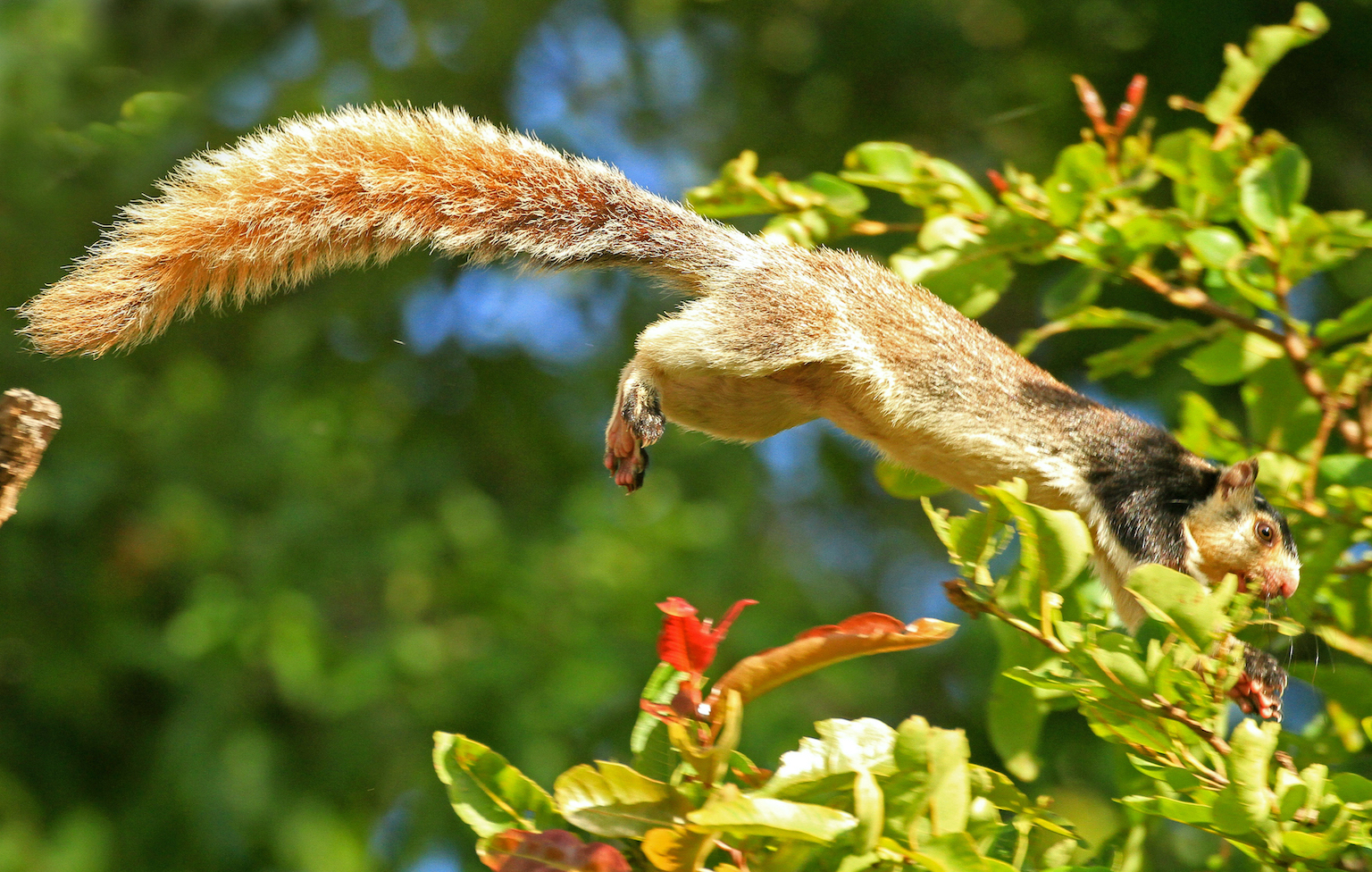 The grizzled giant squirrel is most active in the morning and early evening. Wildlife biologist Ipsita Herlekar, who observed them in Karnataka's Cauvery Wildlife Sanctuary, writes that they use an interesting tactic to escape predators. When pursued by a predator, they run very quickly for a short distance before coming to a sudden halt. This confuses the predator and gives them a chance to escape. Photo: Davidvraju, CC BY-SA 4.0 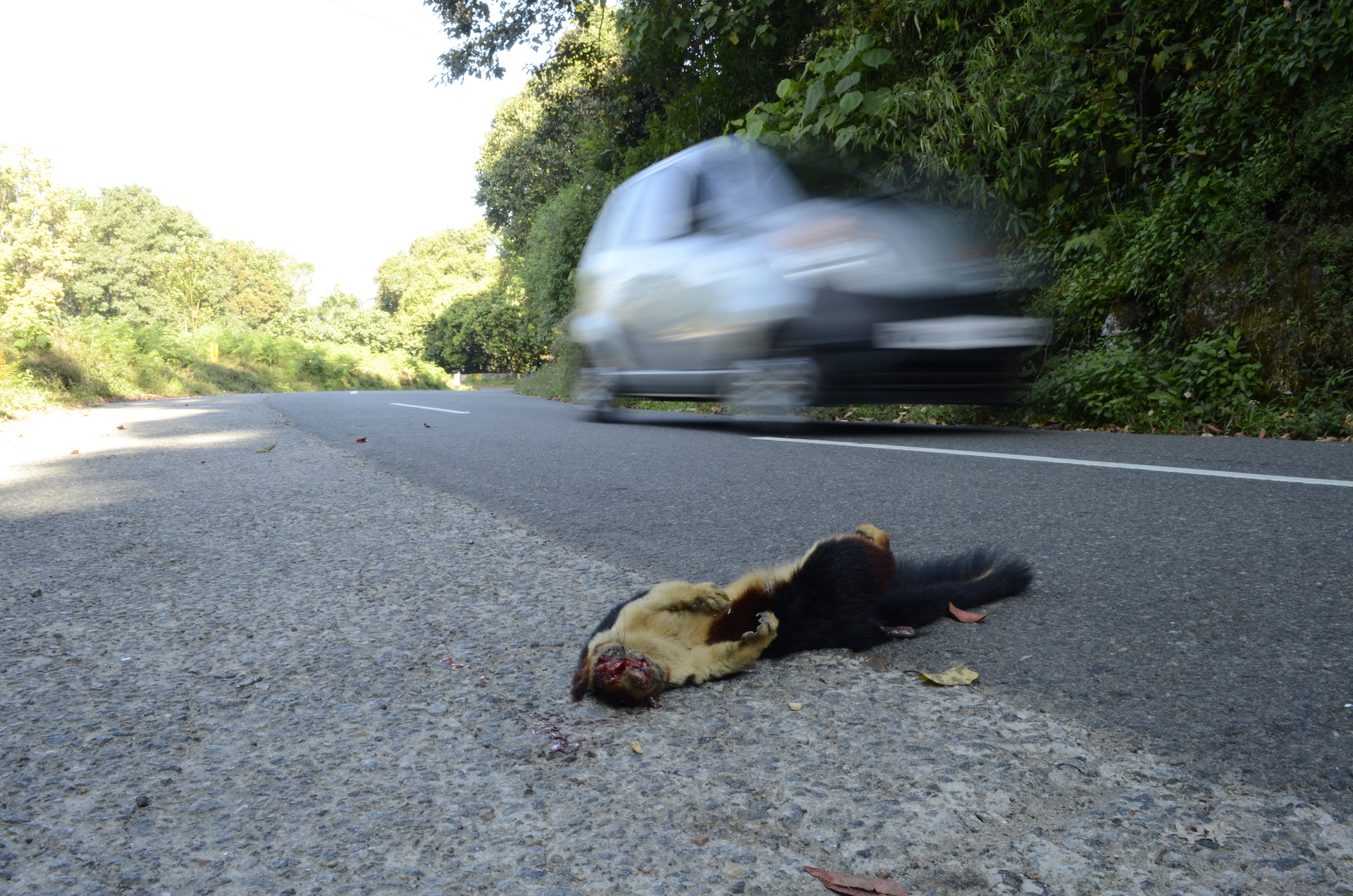 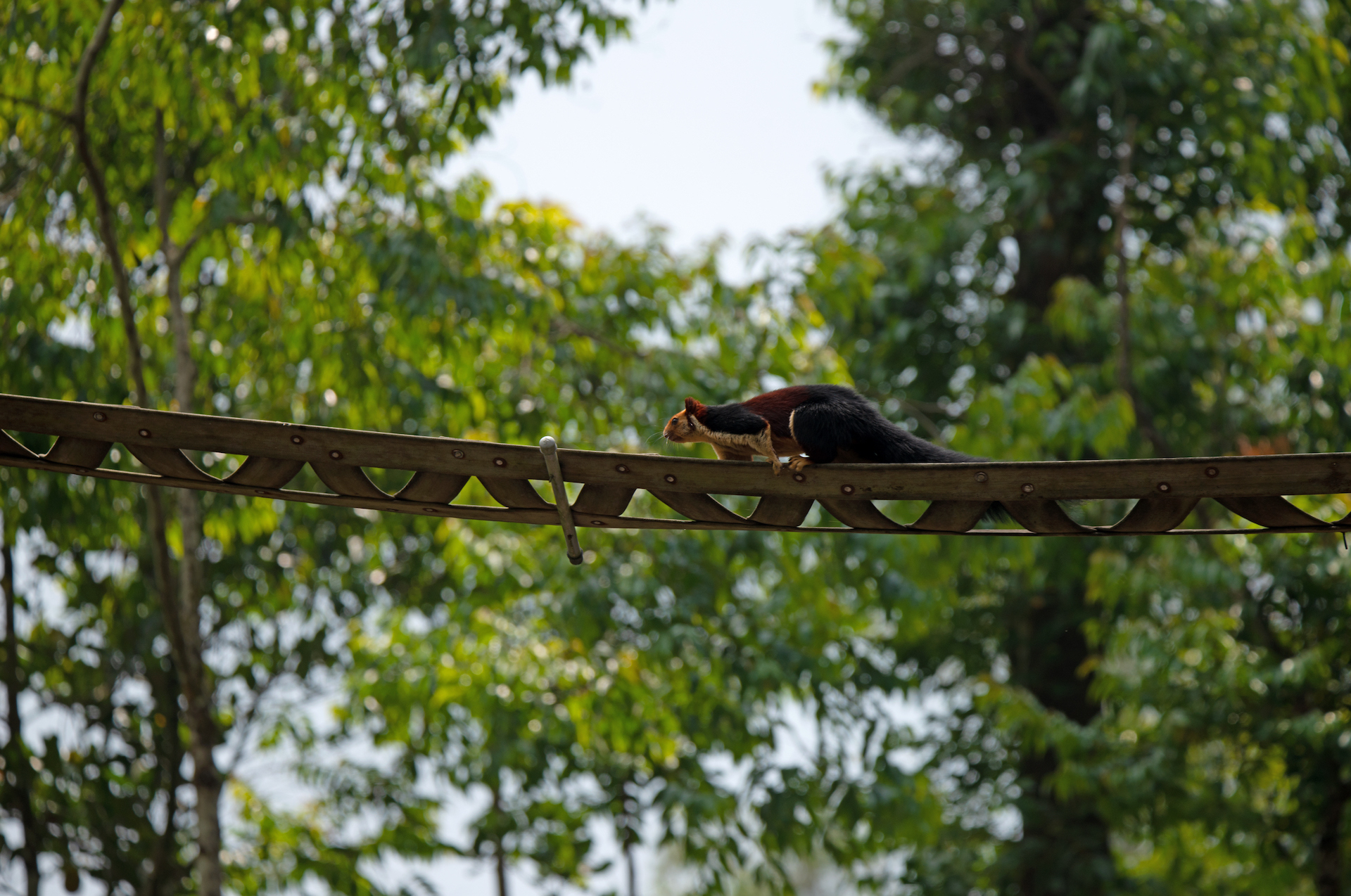 One of the greatest challenges facing the survival of giant squirrels is the degradation and destruction of their forest habitats. “Squirrels do come down to the ground, especially if there is no canopy cover, and incidences of them becoming roadkill are not uncommon,” says Rajamani. Mitigation measures such as building canopy bridges (right, in the Anaimalai Hills) not only prevent giant squirrels , but also other arboreal mammals from meeting a ghastly end under the wheels of a vehicle (left). Photos: PJeganathan, CC BY-SA 4.0 (left), Ganesh Raghunathan (right)