With the arrival of rainshowers, insectivorous plants, psychedelic crabs, and other flora and fauna flourish within this fascinating ecosystem in the Western Ghats 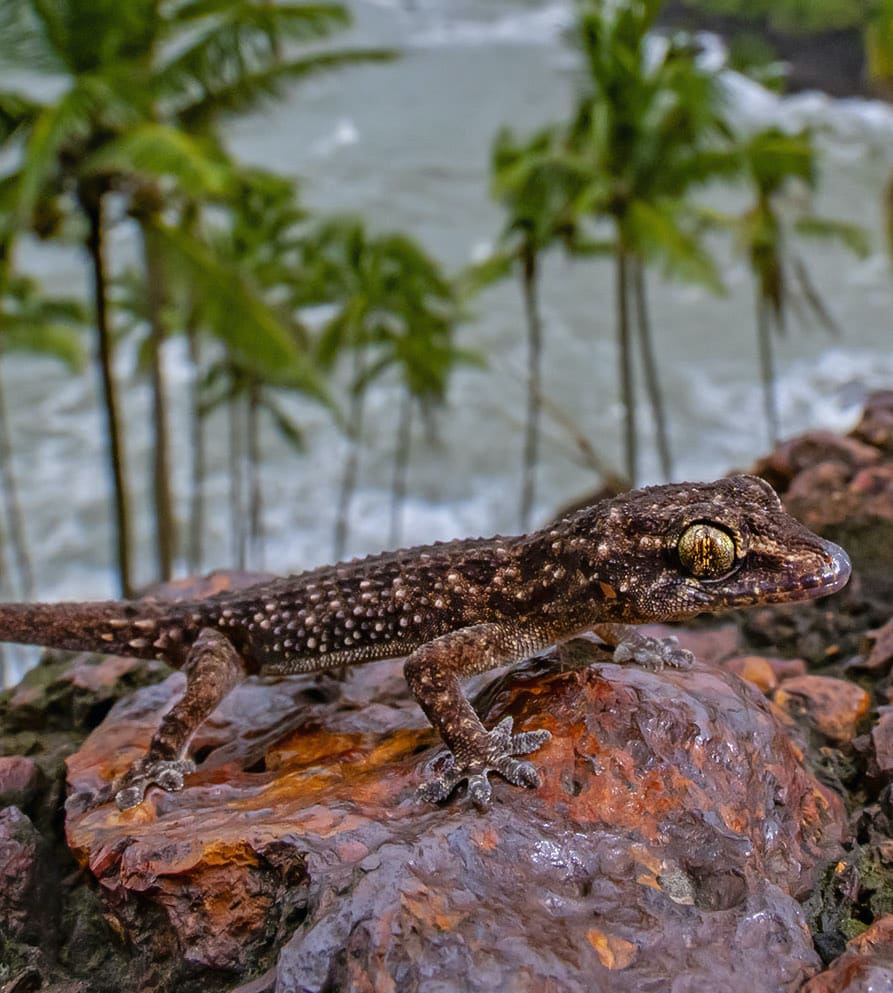 For about half the year, the laterite plateaus of Goa look brown. The ground is bare, save for patches of grass, scrubby trees, and reddish-brown laterite rock. The canopy is sparse, the tropical sun beats down, and geckos, snakes, and small insects are the only visible creatures. But around June, rain clouds blow in from the Arabian Sea, drenching the ground and changing the landscape to a vibrant green that pulsates with life.

Herpetologist Varad Giri writes of the richness of this habitat in an article for Saevus magazine called, Plateaus in the Northern Western Ghats — An Abode to the Unique Faunal Diversity. Giri has been studying the Konkan belt of Maharashtra and Goa for many years now and shares how “they metamorphose into a beautiful landscape during the rainy season,” with the “presence of varieties of endemic and ephemeral floral diversity.”

Within a week of rain, the rocky plateaus are covered with grass and other wild plants. Puddles give way to ponds, streams begin to gurgle, and the sound of frogs, toads, and other breeding insects fill the air. Flowers bloom, bringing more insect life, which in turn attracts birds, snakes, and other reptiles that derive their nutrition from hunting bugs.

The flora of these laterite plateaus is quite special too. Owing to the poor organic matter in the soil, the plants in the region have evolved to be smaller in size, with shorter life cycles that last only a few weeks. Some species flower en masse, cloaking the hillsides with white or pink blooms. Others derive their nutrition from insects and have evolved complex strategies to procure and digest their prey. Many are endemic to these plateaus, found nowhere else on the planet.

The Konkan region is one of the major geographic divisions of western India, writes Giri. “The uniqueness of this region is the presence of large laterite or basaltic plateaus on the crest of mountains close to the coast and Western Ghats mountains,” he says. “The forest, mostly semi-evergreen, is in the valleys. These plateaus, though look barren in non-monsoon season, they metamorphose into a beautiful landscape during rainy season.” 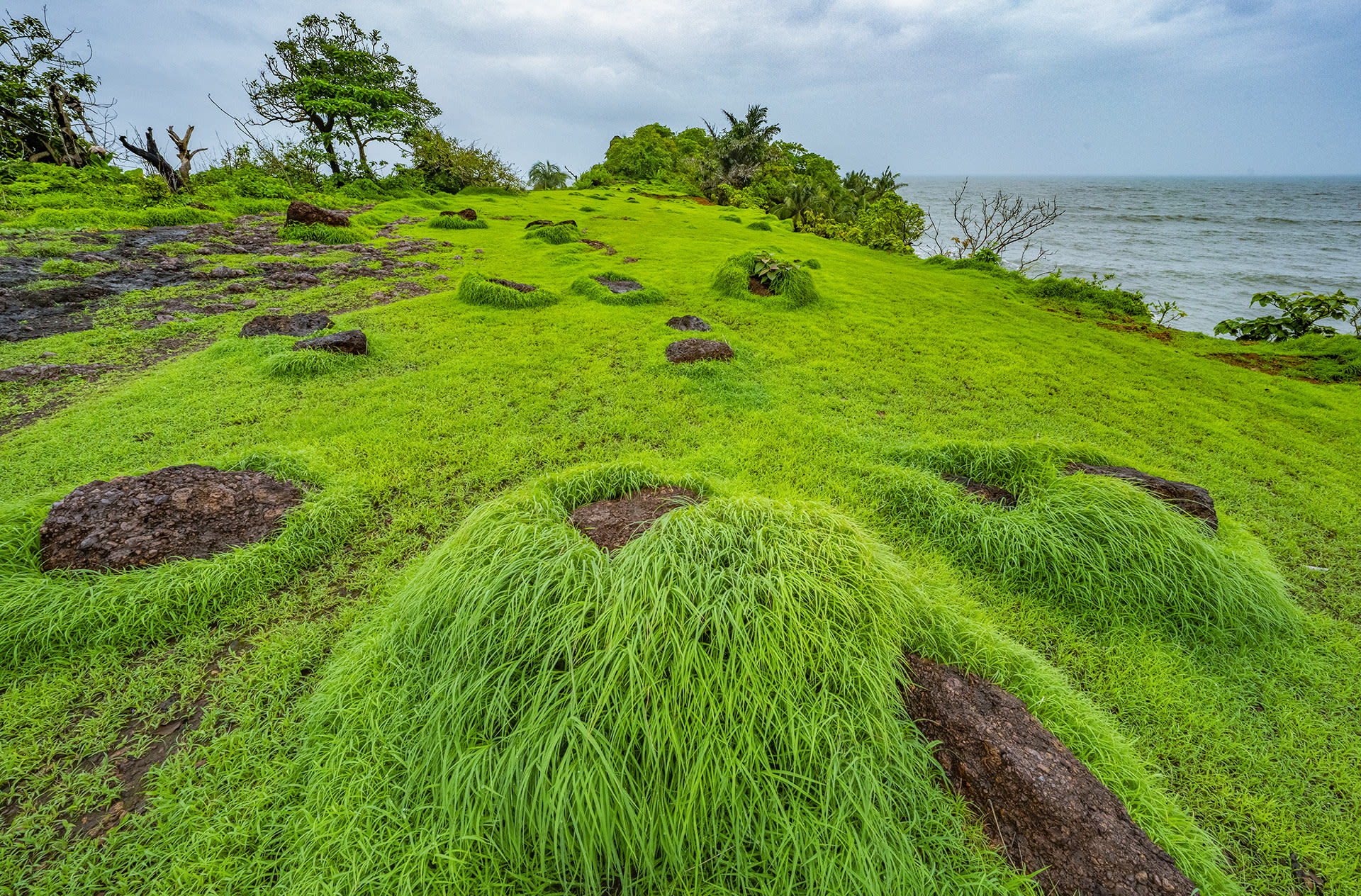 Laterite is a residual, sedimentary rock that is characterised by a rust colour and porous structure. “Because of its porous nature, the water drains out of the plateau quite quickly when it rains,” explains Omkar Dharwadkar, a field researcher and the president of the Goa Bird Conservation Network, who has been studying and documenting the state’s flora and fauna. “All the sanctuaries in Goa have some laterite plateaus, from the lowest elevations to the highest elevations, which is 1,020 m.”

Due to the gravelly nature of the soil, large flora is few and far between, but there are plenty of curiosities to see at ground level. Among them is Utricularia albocaerulea (top), a dainty, carnivorous plant with purple-blue blooms and root nodules that trap insects for nutrition. “They grow where water collects, around puddles,” says Dharwadkar, “and they generally trap water-borne insects that are barely visible to the naked human eye.” Belonging to the same genus is Utricularia malabarica, another carnivorous plant that is endemic to the laterite plateaus of the Western Ghats region. It was first spotted in Kerala but has since been reported in Goa and Karnataka as well.

Drosera indica is yet another carnivorous plant, though it employs a different technique to hunt insects. This member of the sundew family uses the hairs on their leaves to trap insects such as ants and mosquitoes. Each of these strands has a drop of sticky fluid at the tip, akin to dew drops glistening in the sun (which gives the family its name). In the Philippines, Drosera indica is being tested as an indoor biological control against mosquitoes, as its prey includes Aedes aegypti, a carrier of dengue, chikungunya, and Zika fever.

Eriocaulon flowers (also called pipeworts) are commonly seen across the plateau, at various altitudes, “where there is water, and where there isn’t,” says Dharwadkar. These white, orb-like blooms rely on insects for pollination, and in turn, provide nectar to some creatures and perches to hunt for others, like this Tetragnatha spider. Insects, like beetles, eat the entire flower. 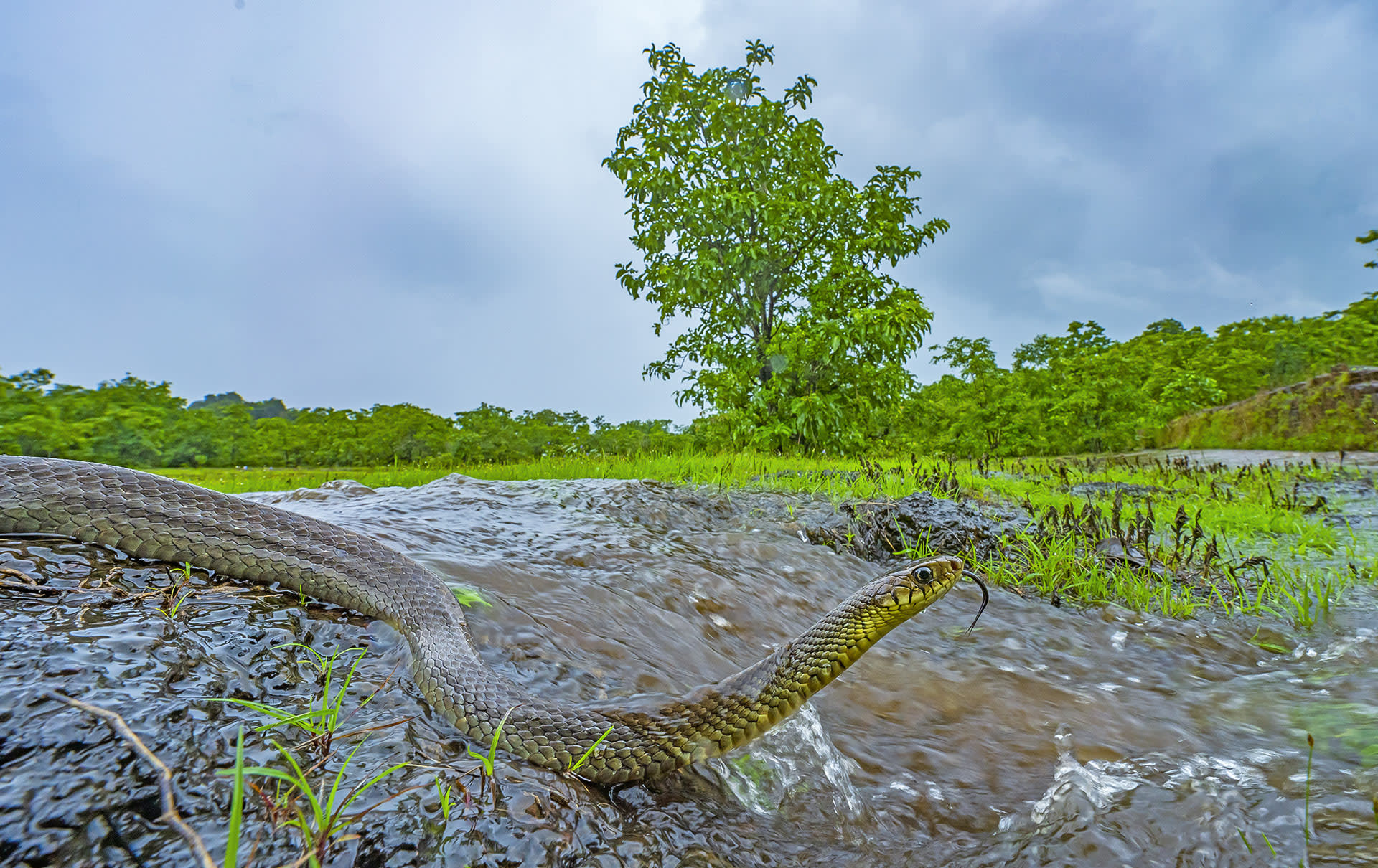 Laterite plateaus are storehouses of reptilian diversity and support a variety of snake life both directly and indirectly. Saw-scaled vipers, keelbacks, and rat snakes (pictured here), actively use the habitat for hunting prey, while other species such as spectacled cobras and Russell’s vipers pass through the plateau, using the space as wildlife corridors.

Brooke’s geckos (Hemidactylus sp.) are found on laterite plateaus of Goa, in wooded areas, near the coast, and by areas of human habitation. Brooke’s geckos display variations in colour and pattern, though they are all shades of brown and beige.

Unfortunately, large swathes of this rocky habitat have been categorised as wastelands because of the absence of forests and larger fauna, but in truth, they speak their own language of biodiversity. Dipcadi goaense, for instance, is a plant that is less than ankle-high for humans, with delicate white, tubular blooms that come and go with the monsoon. It looks fairly unassuming, but it is an extremely rare botanical species found nowhere else in the world. 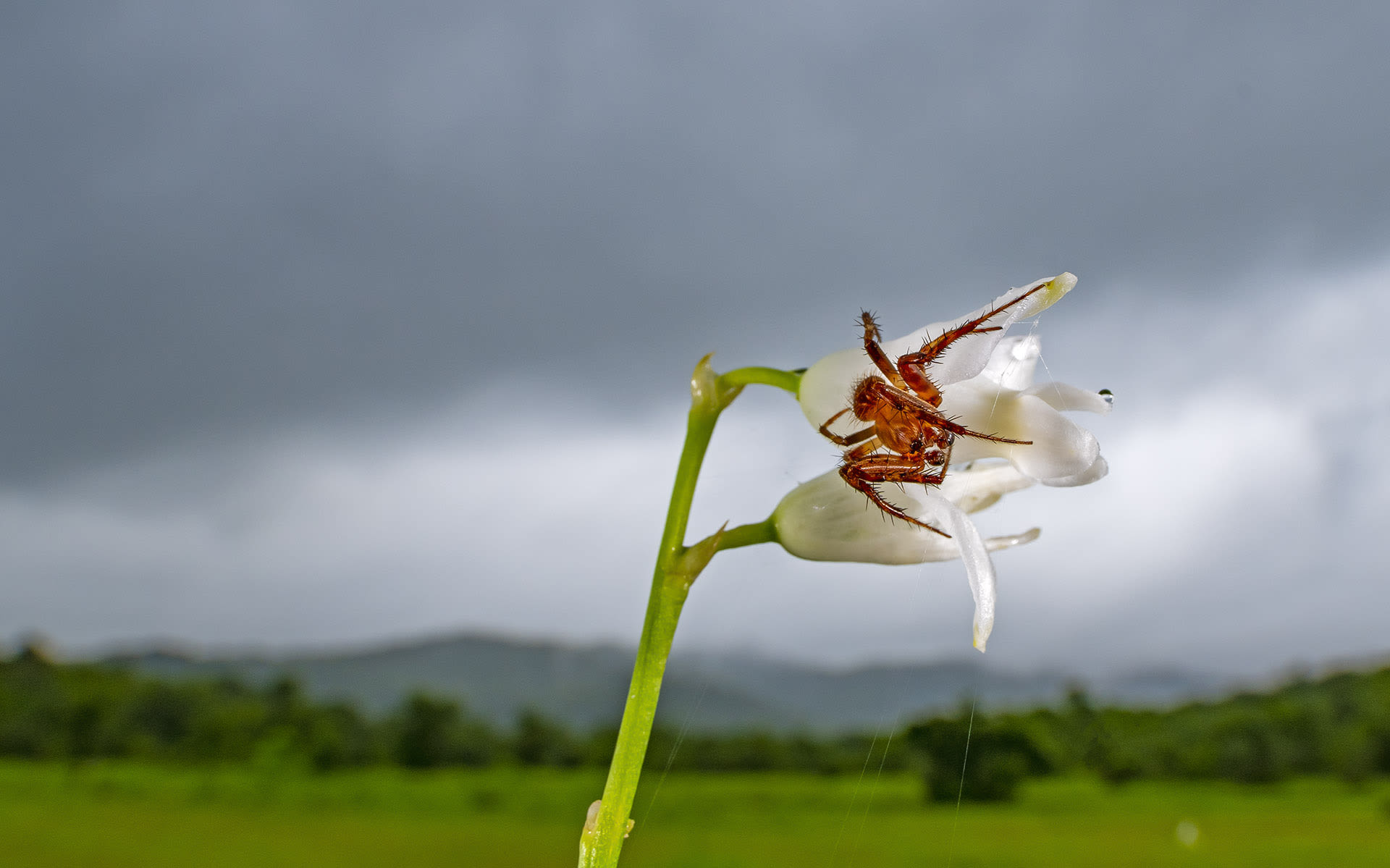 “During floristic studies in Goa, a large population of Dipcadi was located along the lateritic gravelly area at the foothills of Western Ghats,” writes Ashish Prabhugaonkar et al., in a scientific paper on the species, published in 2009. They are found in only two places in Goa, where they flower from June-August. 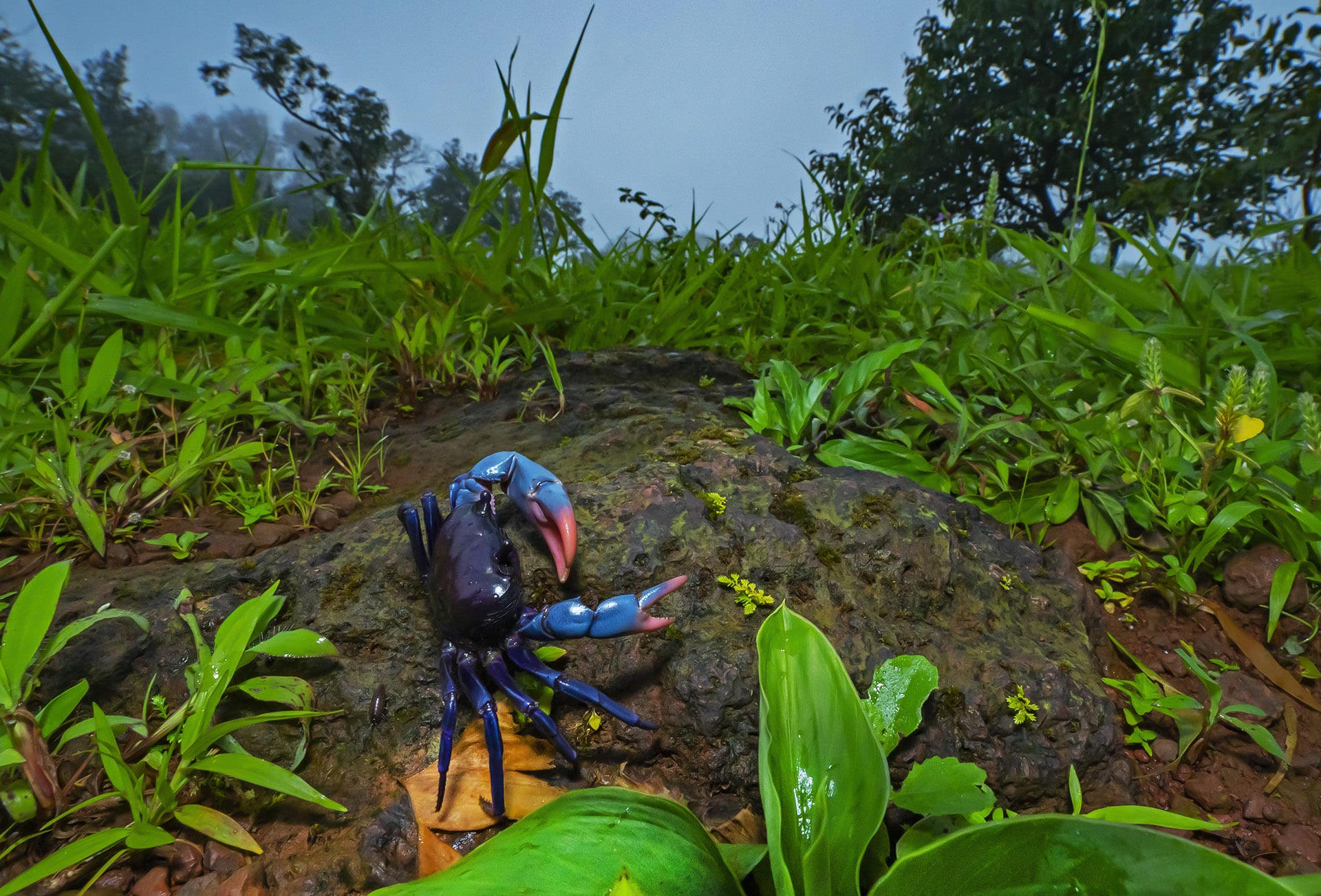 This striking creature is Ghatiana atropurpurea, a freshwater crab species that was classified in 2016 and named after its dark purple body (atropurpureus is Latin for dark purple). “It was found in July 2015 from rainwater-containing tree holes in Amboli, Maharashtra,” writes Richa Malhotra, in an article for The Wire, called “Meet the Western Ghats’ Wonderful New Freshwater Crabs”. “Mature and immature adults were also sighted at ground-level tree holes in Hathipaul, Goa, where younger crabs were seen foraging in the undergrowth or resting under rocks.” 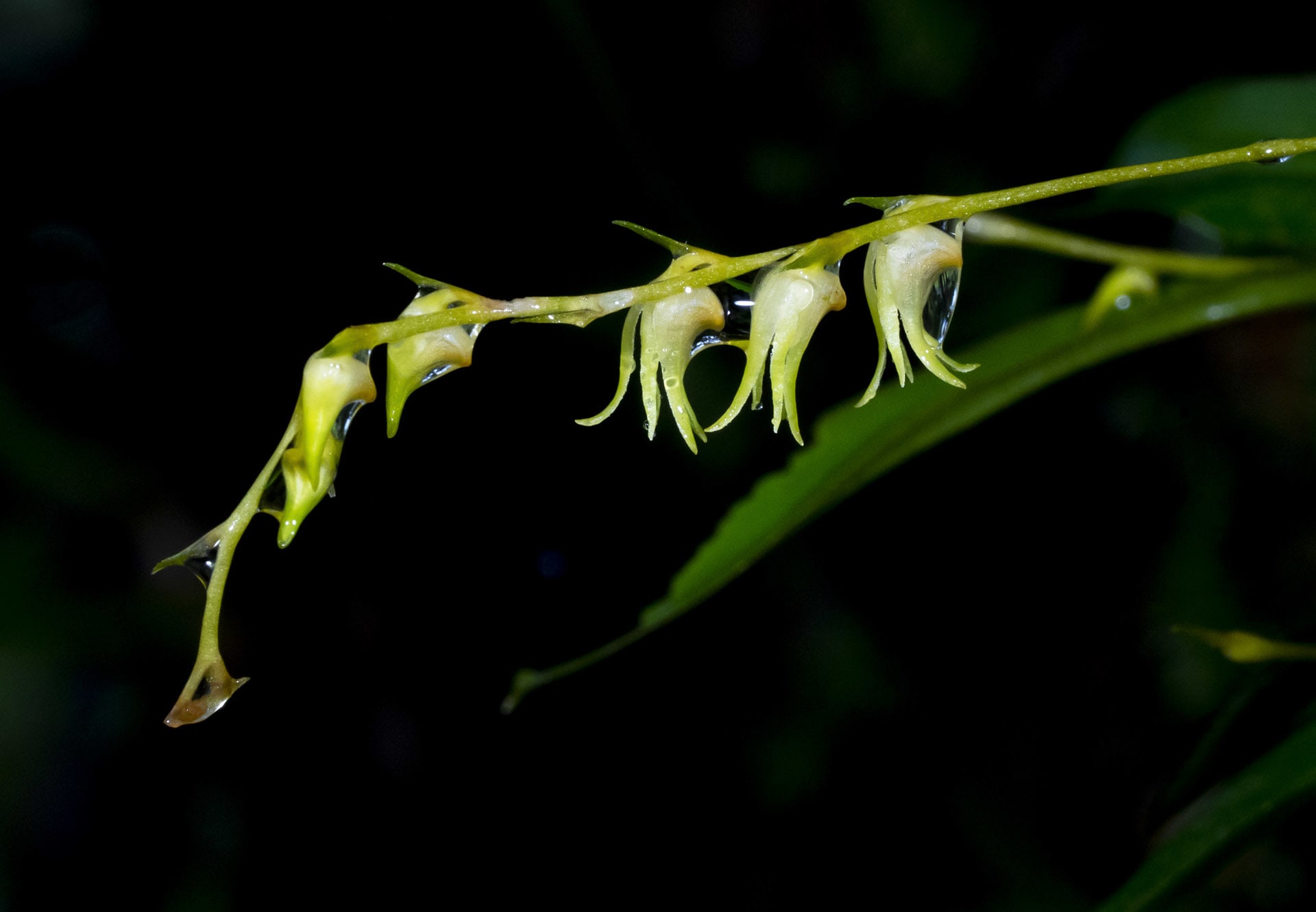 Conchidium filliforme is a species of orchid endemic to peninsular India and found in patches in the laterite plateaus of Goa. “You see them in clusters of about 15-20 on the same tree,” says Dharwadkar. “Though sometimes they occur in hundreds. They are a short-lived orchid species that comes up in the beginning of July. Each flower is smaller than your fingernail.”

The laterite plateaus of Goa are home to many orchid species; some are terrestrial while others are arboreal. The epiphyte pictured here is a member of the Aerides family of orchids, clinging to the trunk of Careya arborea tree. In a paper on the diversity of orchids in Goa, Dr Jeewan Singh Jalal writes: “Distribution of orchids in Goa is concentrated mainly in the Western Ghats region, which accounts for 86% of the total orchid species richness of the state.”

Despite this fantastic range of biodiversity, many laterite plateaus of Goa are threatened by quarrying, mining, and other ecologically harmful activities in the name of development and progress. One of the reasons for this is the popular misconception that these areas are barren wastelands when they are actually home to numerous species of rare flora and fauna. Among these creatures is the blue Mormon butterfly (Papilio polymnestor) found in India and Sri Lanka. It is also the state butterfly of Maharashtra. 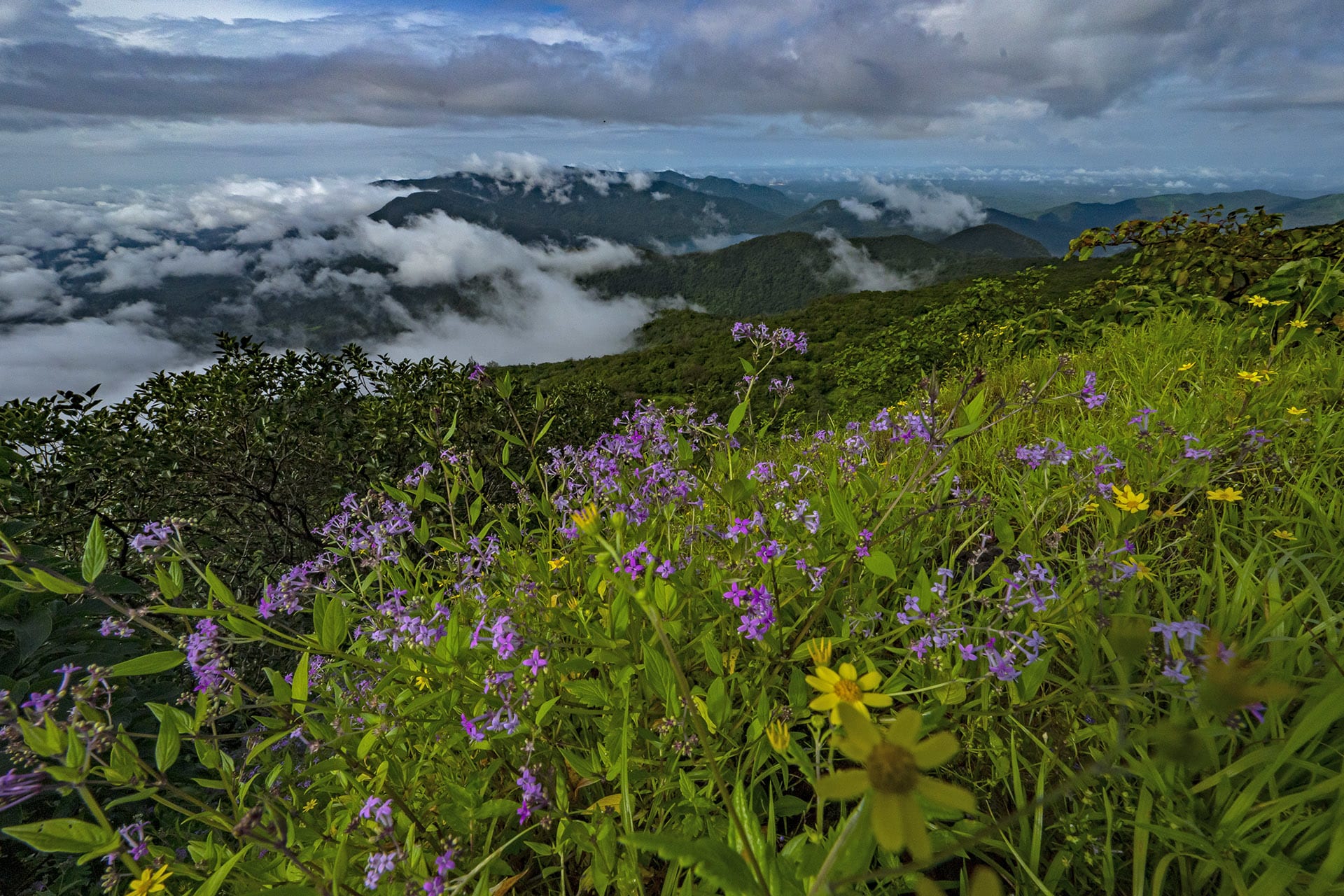 The laterite plateaus of Goa also provide key ecosystem services to the plains by holding water when it rains and then slowly filtering into streams and rivers lower down in the plains. The more these areas are dug for mining or cleared for roads and construction, the more severely the water tables of Goa will be impacted. It’s not just the birds, bugs, and other creatures that need this habitat and the water it captures to survive — we do too. 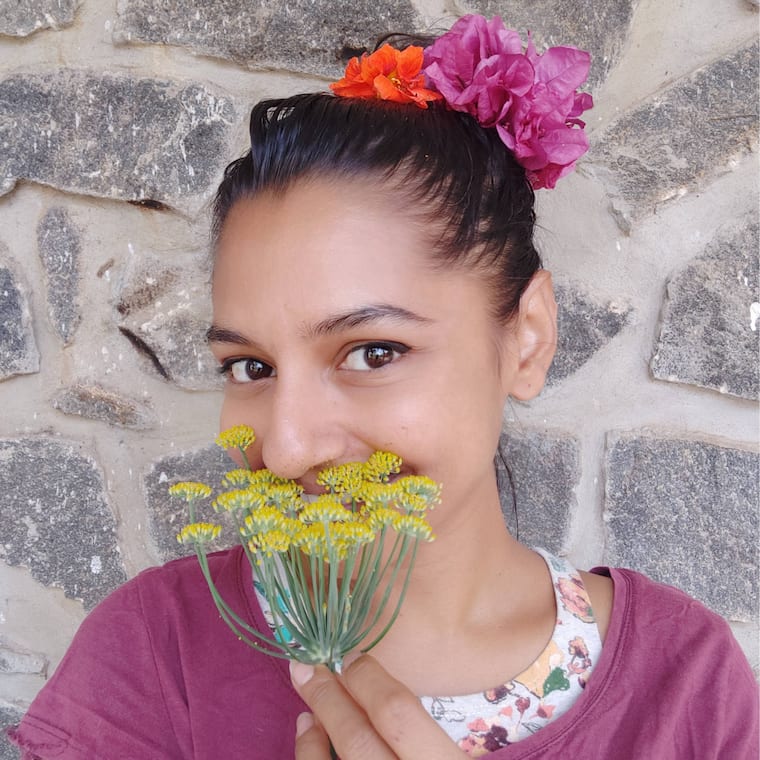