Great Indian Bustard: Love in the Time of Habitat Loss

They may be critically endangered, but courtship rituals during breeding season are as flamboyant as ever

Sex is serious business in the animal kingdom, and nature — as always — displays a healthy diversity when it comes to breeding and bonding practices. Some species, like sarus cranes and black vultures, are monogamous breeders that stick with a single partner for life. Other birds display annual monogamy, which means a pair bonds for a single breeding season. There are also animals that practice polyandry (one female mating with many males), and polygyny (one male with many females).

The great Indian bustard belongs to the last of this category. During breeding season, male bustards flock to areas called “display grounds” where they demonstrate their physique, stamina, and chutzpah by raising their tails, showing off plumage, and making loud calls that can be heard over 500 m away.

It can be quite a spectacle since bustards are large birds — among the heaviest flying species on the planet — with adults growing up to four feet in height. Great Indian bustards are grassland inhabitants that once roamed across much of India. Passionate ornithologist and conservationist Dr Asad Rahmani recalls seeing the bird for the first time in April 1981, in place called Sonkhaliya in Rajasthan. “I saw about 14 of them,” he said, recalling “their magnificent display, and that haughty look they gave when disturbed by humans.”

At the time, there were between 80 and 100 bustards in Sonkhaliya. Today, their numbers are so low, the species is categorised as critically endangered on the IUCN Red List. There are between 100 to 150 birds in all of India, “and no GIB left in Sonkhaliya,” says Dr Rahmani. There is no doubt that this is a vulnerable species, some say on the brink of extinction, but “its persistent survival, despite the odds,” is also admirable, he adds. Long story short: “Everything about the great Indian bustard is great.”

Great Indian bustards probably live for 15 to 20 years, “but we do not know for sure, as we do not have good, scientific data on marked birds,” says Dr Rahmani. Like many species in India, long-term research on the great Indian bustard is wanting, making conservation efforts difficult. Photo: Dhritiman Mukherjee There are four species of bustards in India: the lesser florican, Bengal florican, MacQueen's bustard, and the great Indian bustard (Ardeotis nigriceps), which inhabits the grasslands and desert regions of the Thar Desert of Rajasthan, with smaller populations in Kutch, Gujarat and parts of the Deccan Plateau. The birds feed on “insects, lizards, small snakes, and some green vegetation,” says Dr Rahmani. Cover photo: Devesh Gadhavi

Great Indian bustards (GIB) are quite social in nature. During non-breeding season, the birds spend their time in gendered flocks. “Males move together, and females and their young ones move together,” explains Dr Rahmani, “though males and females do flock together if there is a good feeding ground.” The sexes are similar in appearance, though females (left) are slightly smaller, and paler in colour compared to males (right). Photos: Devesh Gadhavi 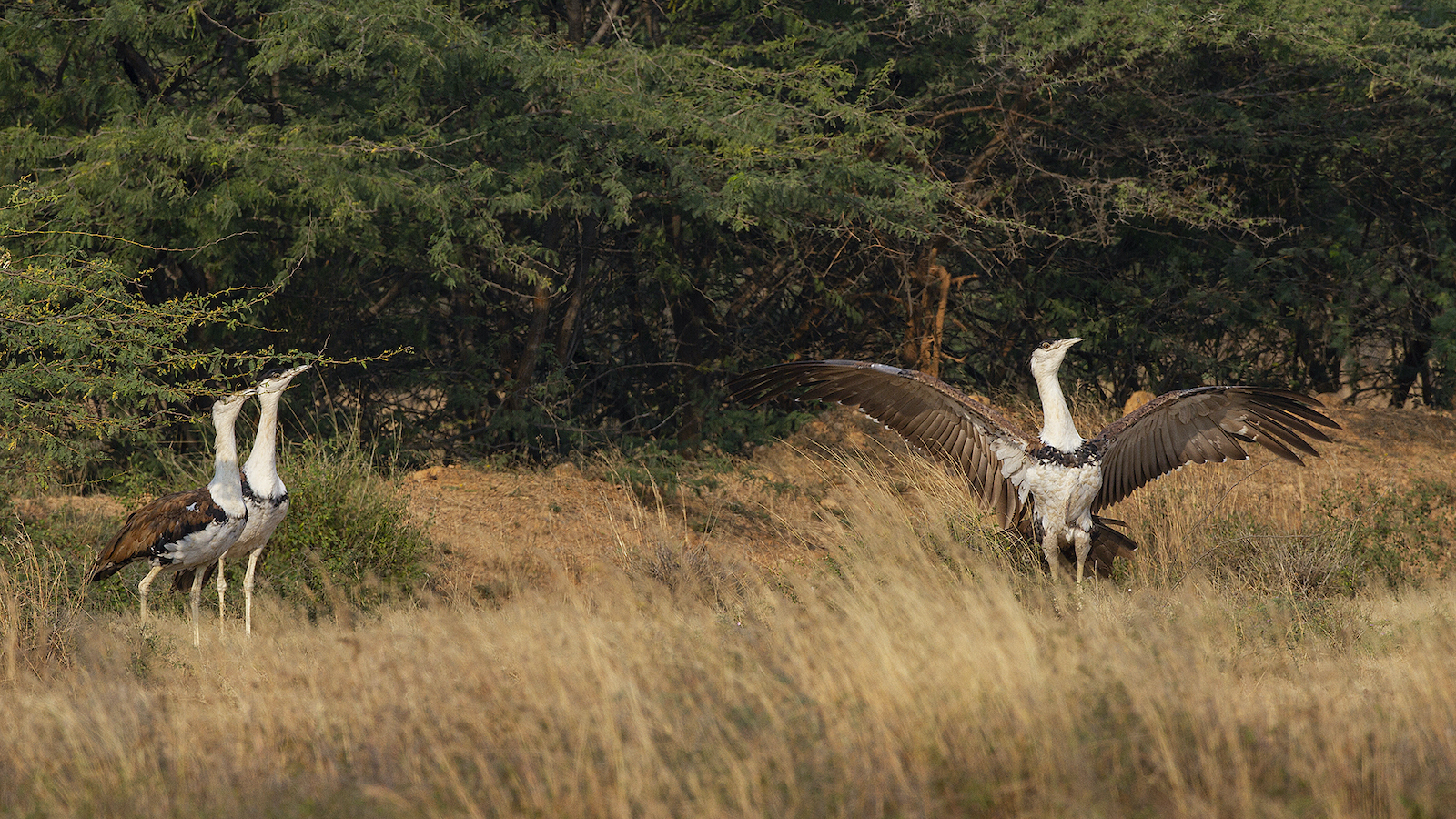 As breeding season approaches, adult males separate from their all-male flock, and spend more time in demonstration areas, called “leks”, where they engage in courtship displays to attract the attention of females. Many species of bird use leks during breeding season though details, such as the size of the lek, and nature of the display vary. Photo: Devesh Gadhavi

Great Indian bustards display “site fidelity”, meaning adult males return to the same site every year for courtship displays. “I monitored one site in Solapur for 30 years, where males would return year after year,” says Dr Rahmani, “As soon as an adult male died, another took its place. Good sites are at a premium, so as soon as there is a vacancy, another male occupies it.” Photo: Devesh Gadhavi

These “good sites” must be earned, and male great Indian bustards will fight each other for prized positions within the community lek. “Subadult males are allowed in the adult’s territory, but other adult males are not tolerated in the breeding season,” says Dr Rahmani, adding that “females are welcome all the time.” Photo: Dhritiman Mukherjee 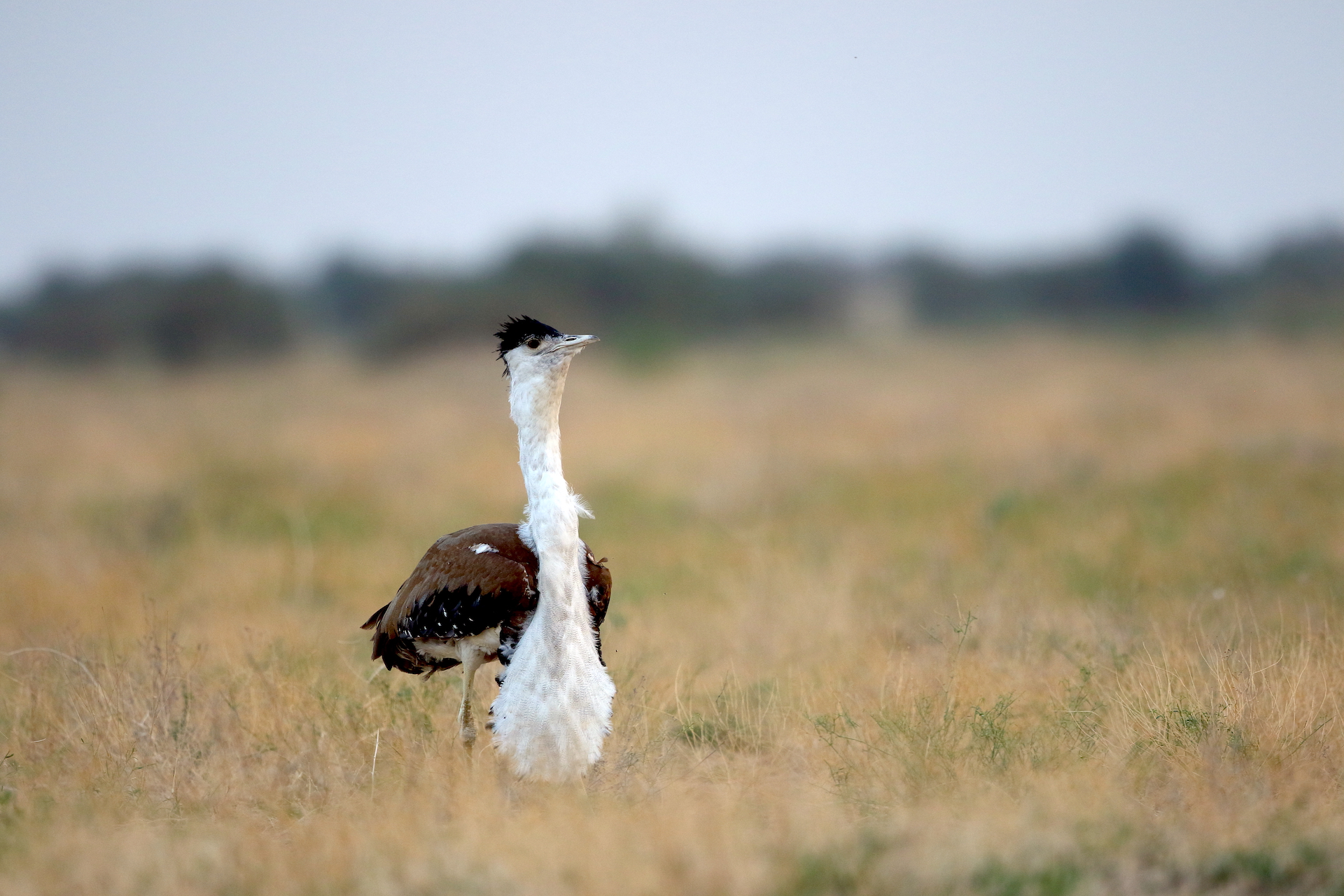 The most curious aspect of the great Indian bustard’s courtship ritual involves a neck pouch, called the “gular”, that only males of the species possess. Located below the tongue, the gular is inflated to produce a loud call during breeding season — a siren call of sorts, to let the ladies know the show has begun. In peak display mode, males strut around with their tail feathers raised, their body plumage fluffed, and their gular hanging like a deflated balloon between their legs. According to an article by ecologist Dr Arvind Singh, “It stands in the same position for a few minutes and to further highlight the effect, it produces deep moaning calls.” Photo: Gobind Sagar Bharadwaj

Females play the role of audience, surveying their options by travelling between territories until they find a suitable male. When they do find an attractive partner, the female approaches the male, and after closer inspection, retreats for copulation. When mating is complete, the female leaves the display lek to find a good spot to nest. “Like many ground nesting birds, they do not make a classical nest of sticks as it will become conspicuous to predators,” says Dr Rahmani. “The definition of a nest is simply a scrap of ground where the eggs are laid. Only the female GIB selects the nesting site, incubates the egg, and raise the chick. Males do not play any role whatsoever.” Photo: Gobind Sagar Bharadwaj 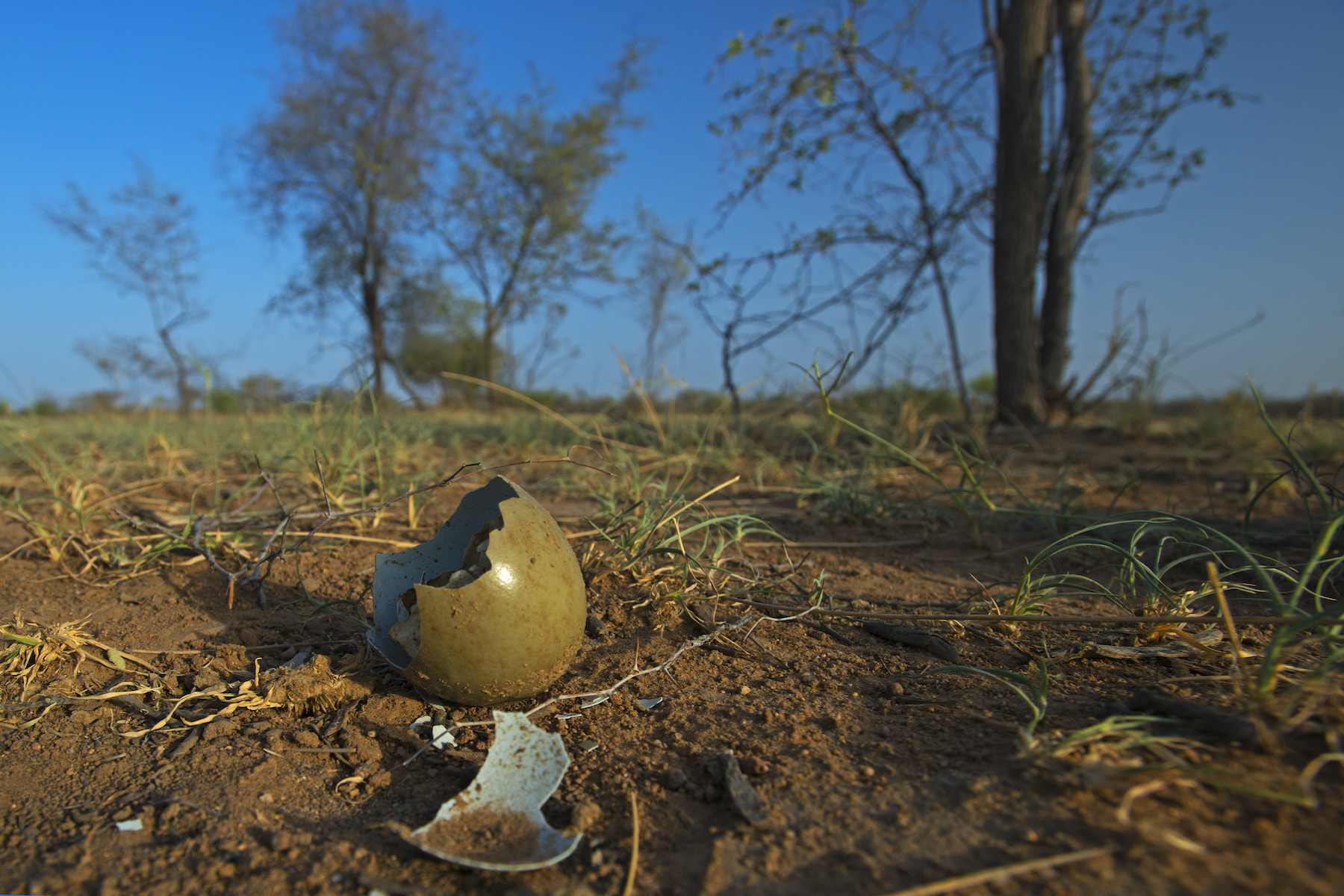 Females lay one egg, two at best, which hatch about a month or so later, but “we need studies on marked birds to know whether they lay an egg every year or in alternate years.” Reproductivity rates vary with the health of the habitat, points our Dr Rahmani. “In good areas, such as the Deccan where there is more rainfall, females might lay an egg every year, while in the arid Thar Desert the GIB may lay an egg every alternate year. In many species, birds in more productive areas (with good rainfall, food, and shelter) breed more frequently, and even lay more eggs in some species.” Photo: Dhritiman Mukherjee

In response to the dwindling numbers of the great Indian bustard, the Wildlife Institute of India and the Rajasthan Forest Department started a conservation breeding programme, where they are currently observing and scientifically raising ten birds. “In 3-4 years, we have to develop a stock of 35-40 captive birds to kickstart conservation breeding,” says Dr Rahmani, “so the birds can be released in another 5-6 years’ time.” Photo: Devesh Gadhavi

In addition to the breeding programme, Dr Rahmani says, on-ground conservation measures are needed to curtail the threats faced by these birds. These include “the control of free-ranging stray dogs in areas populated by the birds”, since bustards are largely terrestrial and nest on the ground. Also, “the involvement of locals through regulated tourism activities in areas such as the Desert National Park; and anti-poaching squads dedicated to monitoring the great Indian bustard.” Photo: Gobind Sagar Bharadwaj 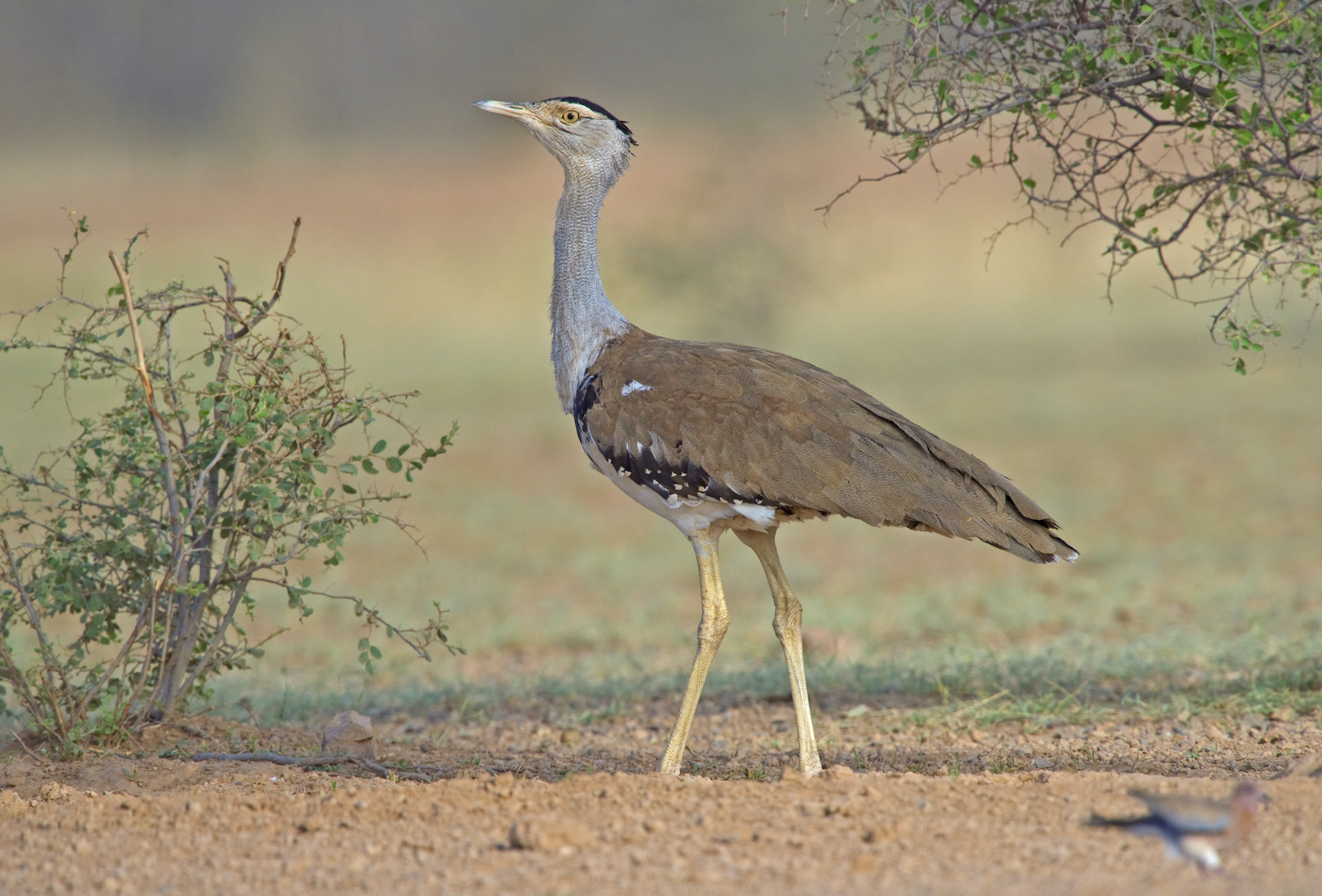 The biggest need of the hour, however, is the protection of the bustard’s grassland habitat — among the most abused landscapes across the planet, for the ease with which they can be put to industrial use. Grasslands are often considered inferior habitats, wastelands even, but they offer crucial ecosystem services by sequestering carbon, ensuring stable water tables, and providing habitats to a wealth of biodiversity — from delicate species of dragonfly to the robust and critically endangered great Indian bustard. Photo: Dhritiman Mukherjee