Seagulls employ various strategies to secure a meal. From intelligent fishing to scavenging and outright theft, their schemes succeed at times and fail comically at other points

Watching a flock of gulls bobbing on the waves off the coast of Agonda Beach in Goa, I guessed they were either black-headed gulls (Chroicocephalus ridibundus) or brown-headed gulls (Chroicocephalus brunnicephalus). These two species are the most frequently encountered gulls on India’s coasts and are often seen near inland waterbodies as well. “Brown-headed and black-headed gulls often occur together in the same location. So you need a trained eye to tell them apart,” says wildlife biologist Dr R Suresh Kumar.

The absence of any fishing boats around us at the time explained the calm demeanour of the gulls that morning. However, they have a reputation for losing all dignity when the opportunity for a meal presents itself. And since their skulls have mobile joints, which allow them to unhinge their jaws, they will virtually swallow anything that will fit down their gullet.

Remarkably intelligent, these birds have quite a few tricks up their sleeves to secure a meal. For example, they are known to stamp the ground to simulate the sound of rainfall to trick earthworms into coming to the surface. They may also drop molluscs on rocks from a height to break open their shells or follow ploughs in agricultural fields to find grubs. Marine biologist Abhishek Jamalabad, who has observed these birds frequently, writes on the online blog JLRExplore.com, that although gulls are considered intelligent birds by science, whenever he has seen them with other animals around, they clown around a lot, “sometimes making utter fools of themselves.”

Wildlife photographers Neel Sureja, Saurabh Sawant, Shreeram MV and Mayank Soni, whose images are displayed in this series, agree that gulls can be funny and highly entertaining to watch, especially when they are on the lookout for food.

Most gulls are migratory, moving to warmer climes during the winter. Besides black-headed and brown-headed gulls, several other species are seen in India. These include the slender-billed gull (Chroicocephalus genei), Pallas’s gull (Ichthyaetus ichthyaetus), sooty gull (Ichthyaetus hemprichii), mew gull (Larus canus kamtschatschensis), Caspian gull (Larus cachinnans), steppe gull (Larus fuscus barabensis) and Heuglin’s gull (Larus fuscus heuglini). “We see gulls primarily during the winter in our country. Different populations of these birds fly south from beyond the Himalayas, where they breed in high-altitude lakes,” says Dr Kumar. 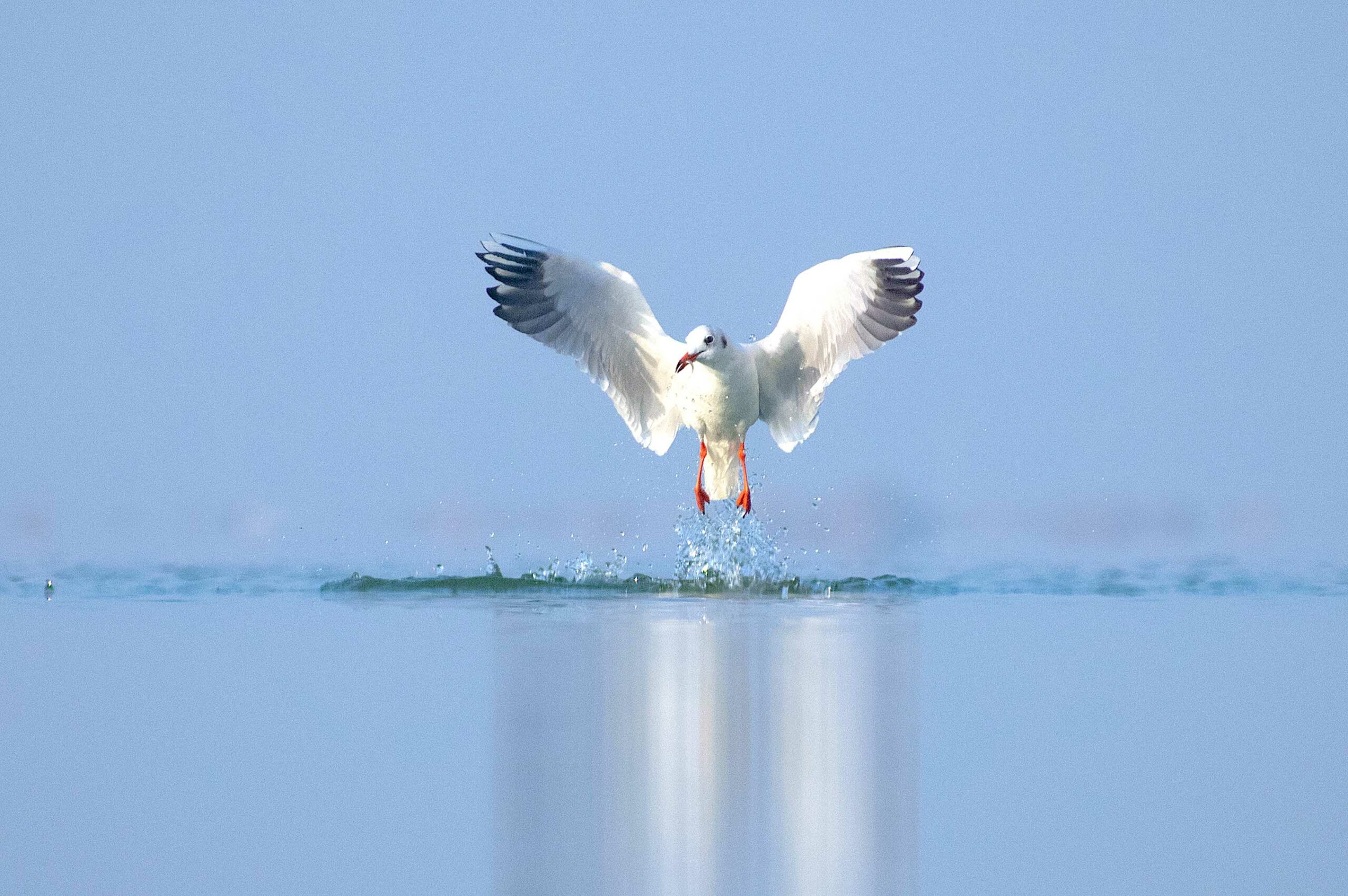 A black-headed gull scoops up a fish from the surface of a waterbody in Jamnagar. One of the smaller gull species, it takes prey from the water’s surface while swimming or by dipping its head underwater. It also feeds on aquatic and terrestrial insects, earthworms, marine invertebrates, and grains. As their popular names indicate, black-headed and brown-headed gulls sport a dark hood during the breeding season. However, during the non-breeding season in winter, they shed the dark hood, leaving only a dark spot behind the eye. Photo: Neel Sureja Cover photo: Mayank Soni 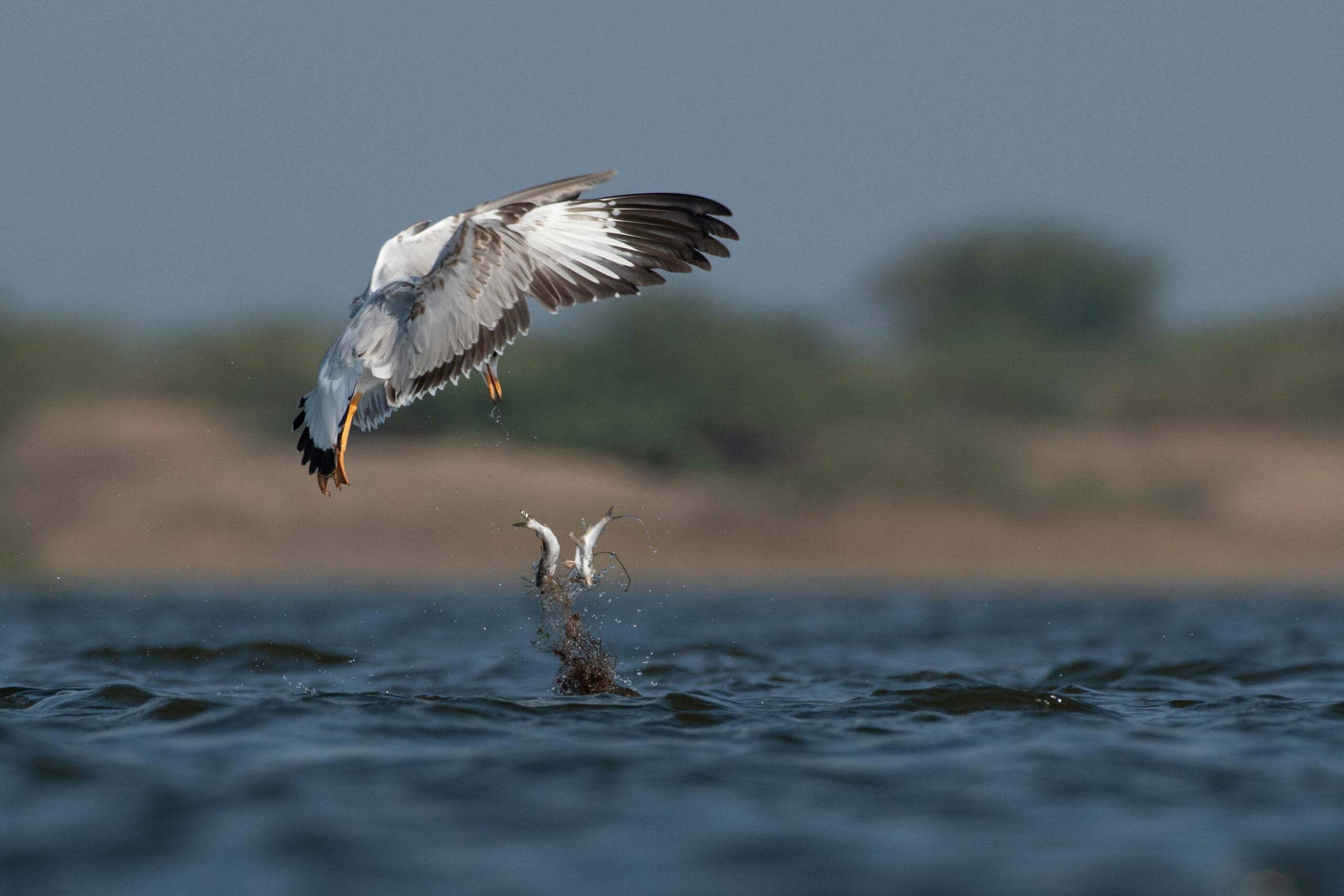 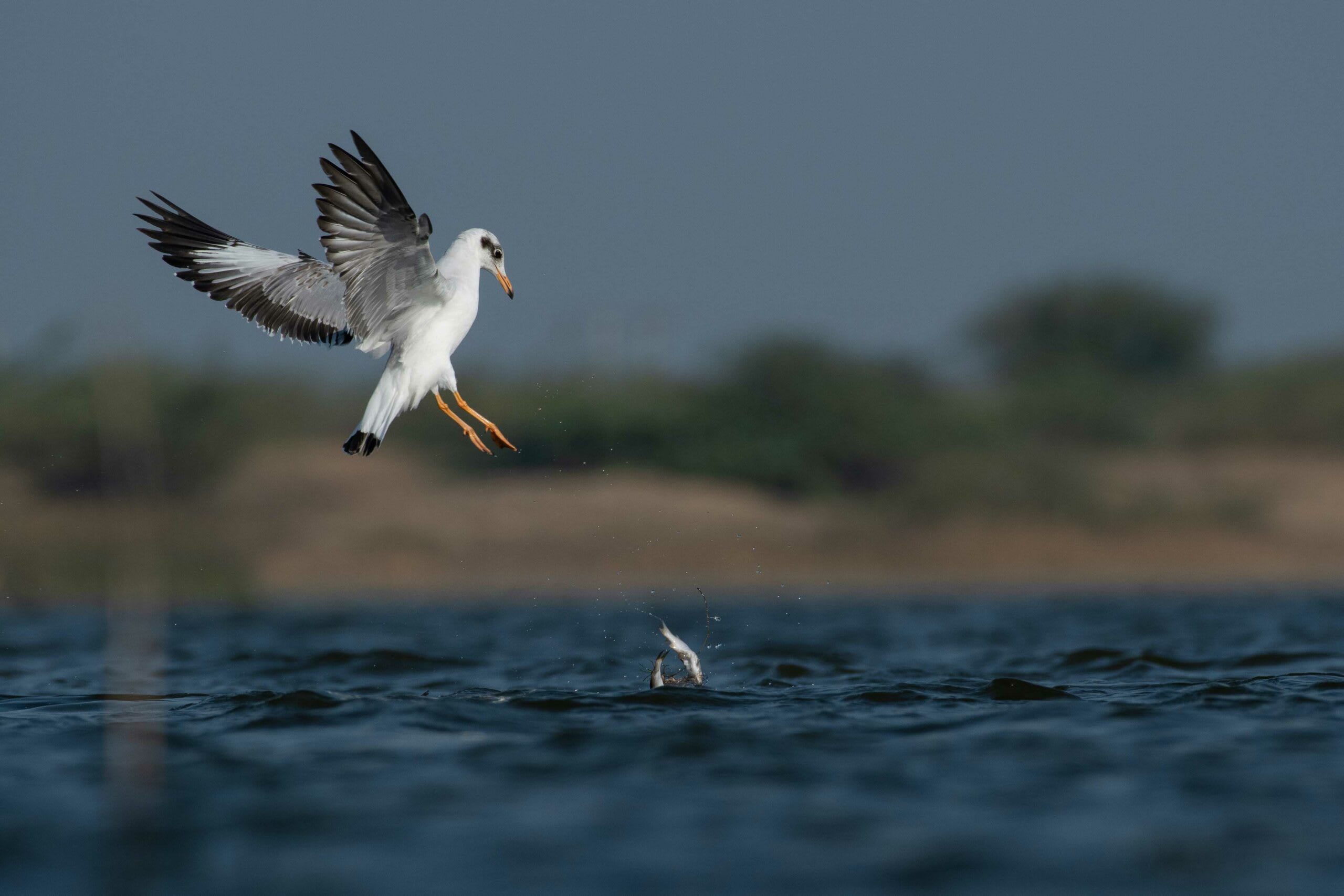 Brown-headed gulls are voracious feeders. In these images from Jamnagar, a bird is having a go at not one but two fish at a time. Along with fish, their diet comprises shrimps, insects, grubs, fish waste, worms, carrion, reptiles and rodents. They also scavenge for scraps in garbage dumps and forage for invertebrates in agricultural fields. Photos: Neel Sureja

A flock of brown-headed gulls harasses a cormorant, forcing it to give up its hard-earned catch in Jamnagar. “Thought the birds forced the cormorant to drop the fish it was carrying in its beak, they couldn’t lay claim to it before it fell into the water below,” said Neel Sureja. Many species of gulls are kleptoparasites, which means they steal food from other birds and animals. This strategy allows these opportunistic birds to use the time and energy spent by others to reduce their costs of obtaining food. Photo: Neel Sureja 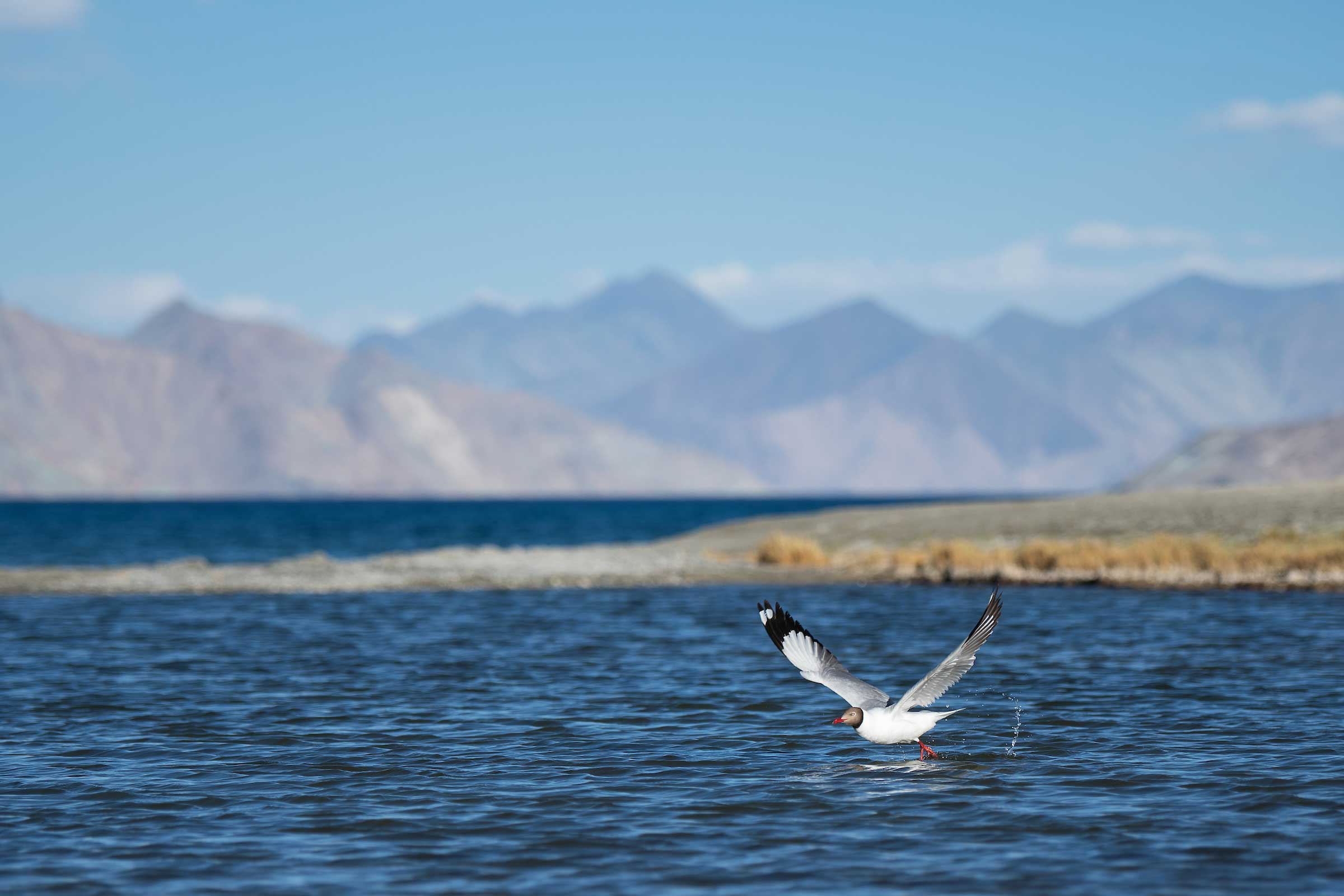 A brown-headed gull flies low over the Pangong lake in Ladakh. Some populations of the brown-headed gull breed in Ladakh during summer before flying southwards in winter. “They are quite common here and can be seen frequently near the lakeshore. Though they are not addicted to junk food like their counterparts in other parts of the country, they do accept food from tourists on occasion,” said Shreeram MV. Photo: Shreeram MV

A mixed flock of black-headed and brown-headed gulls takes flight near a beach in Alibag, Maharashtra. “Such large congregations of gulls are a common sight along Alibag’s beaches. The incoming tide brings along with it a feast for these birds who have suitable beaches along this coast,” said Saurabh Sawant. According to Dr Kumar, there are certain areas in India where gulls are known to congregate in large numbers. “The Maharashtra coastline, especially the Sindhudurg region, is one such place where one can see huge congregations of these birds. There are some areas where they will gather in numbers ranging from 5,000 to 10,000. For instance, Pallas’s gulls, one of the most common of the large gulls seen in India, are known to gather in numbers of 2,000 to 3,000 at Bhitarkanika in Odisha,” he says. Video: Saurabh Sawant 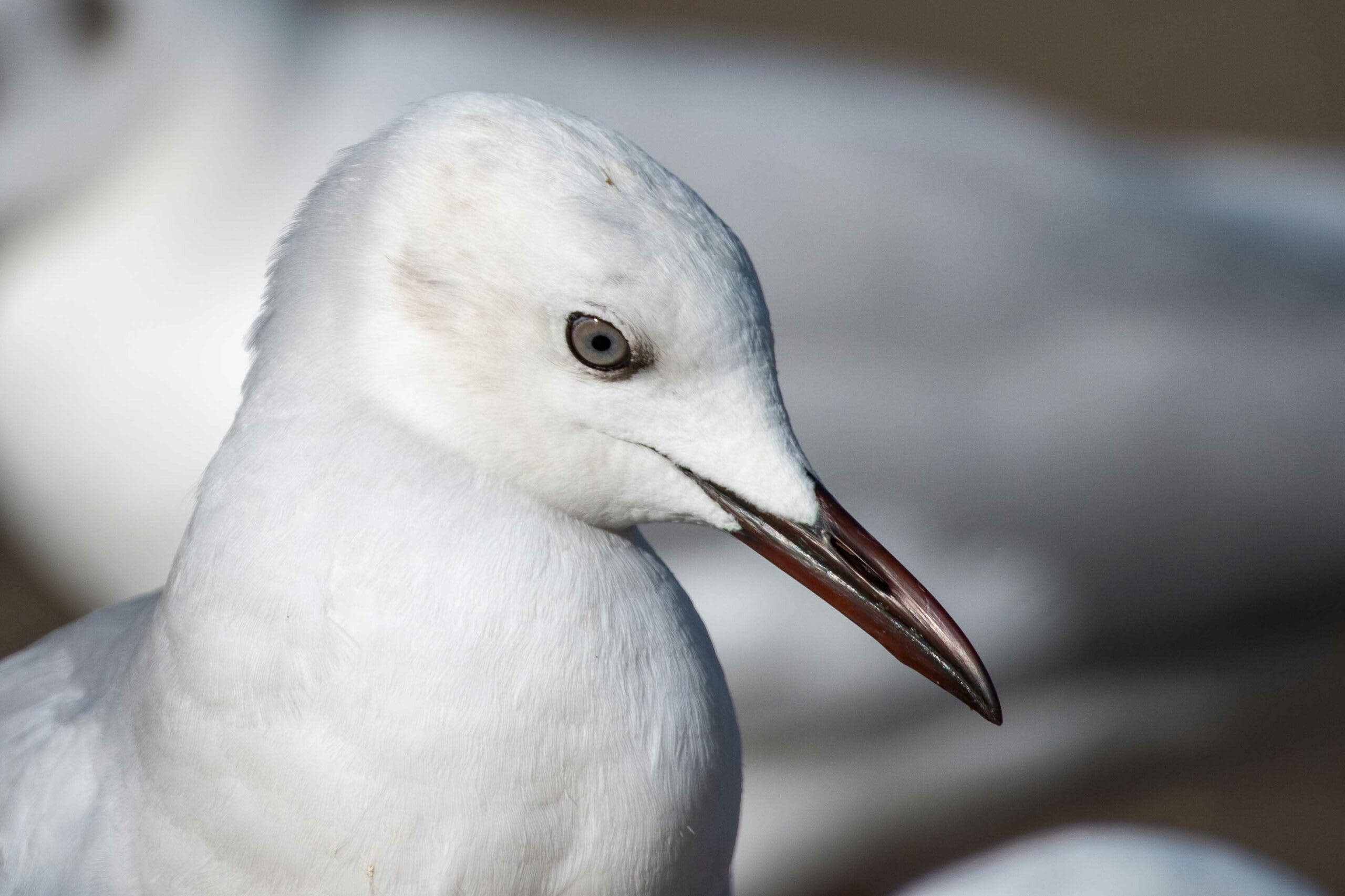 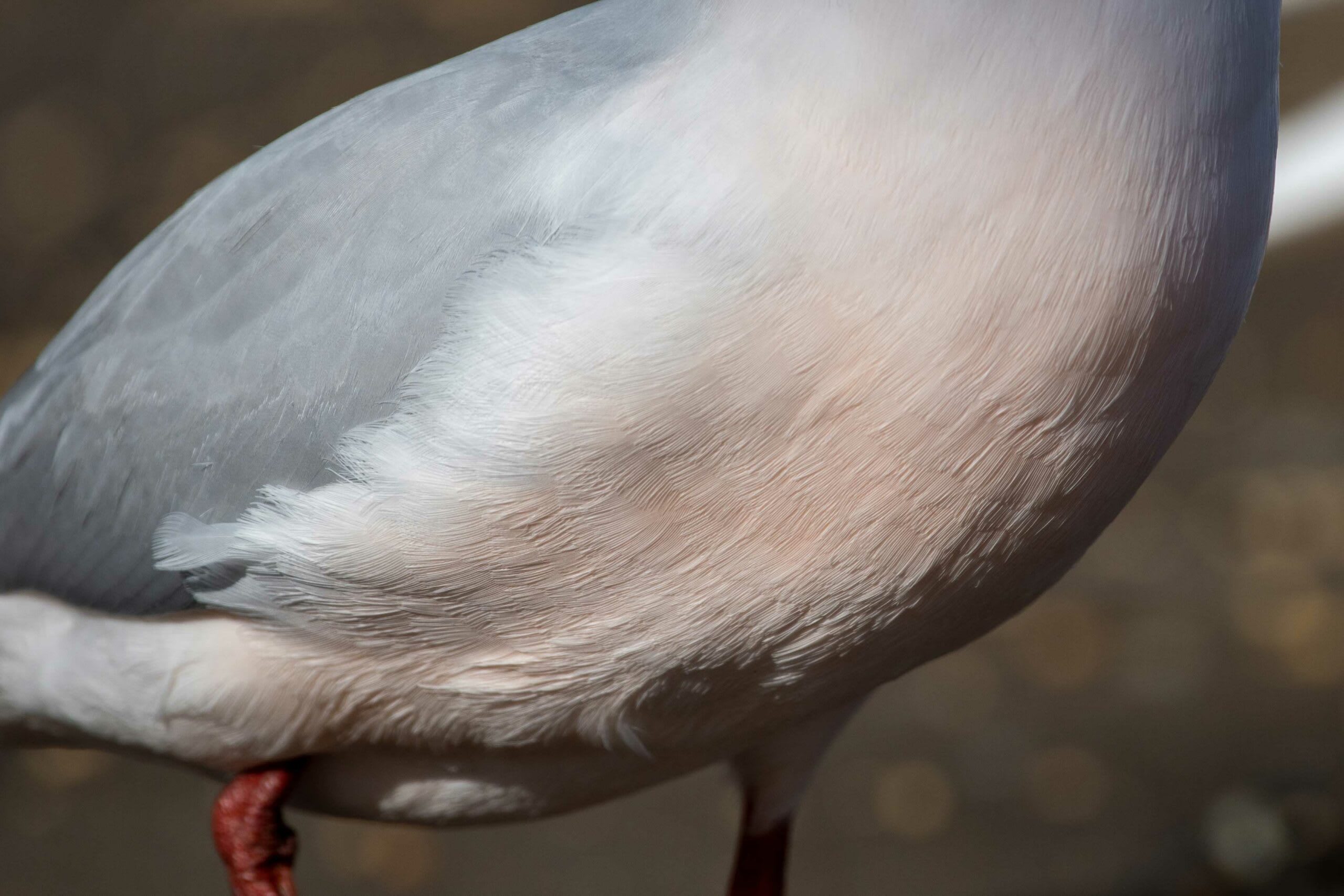 In Jamnagar, a flock of slender-billed gulls (top) waits for the opportune moment to dive into the water for prey. “The way gulls let go of opportunities is amusing. Once they spot a fish near the water’s surface, they may hover above their prey, looking intently at it, as if trying really hard to decide whether to grab it or not. And often, an instinctively smarter tern zooms in on the scene from between the pondering gulls, plunges in, grabs the fish, and flies off, leaving the half-bewildered, half-angry gulls squawking and cawing in protest,” according to Jamalabad. Slender-billed gulls have a sloping forehead (above left) and a longer bill than black-headed and brown-headed gulls. A rosy-pink flush (above right) is seen on both the male and female’s underparts during the breeding season. Photos: Saurabh Sawant 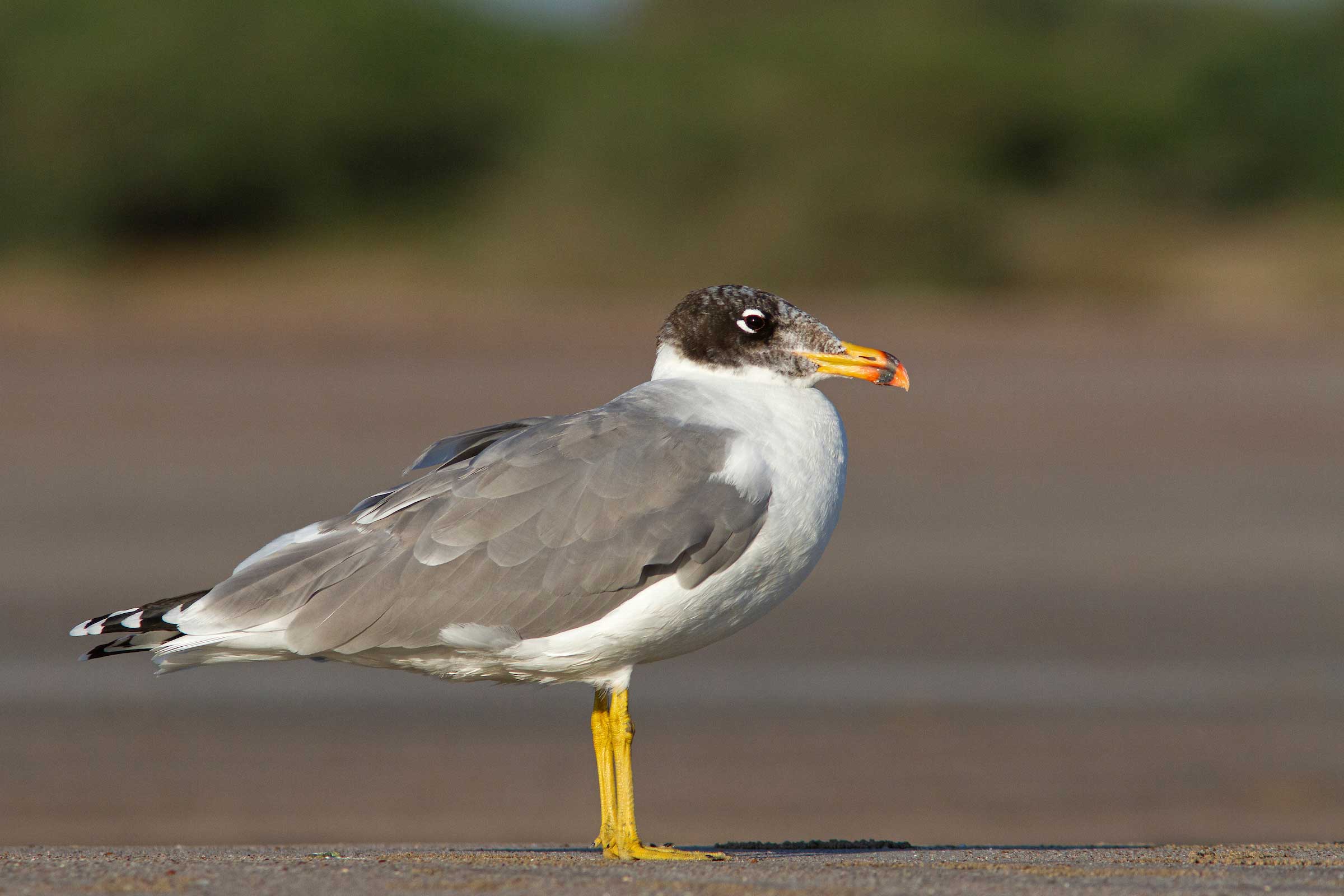 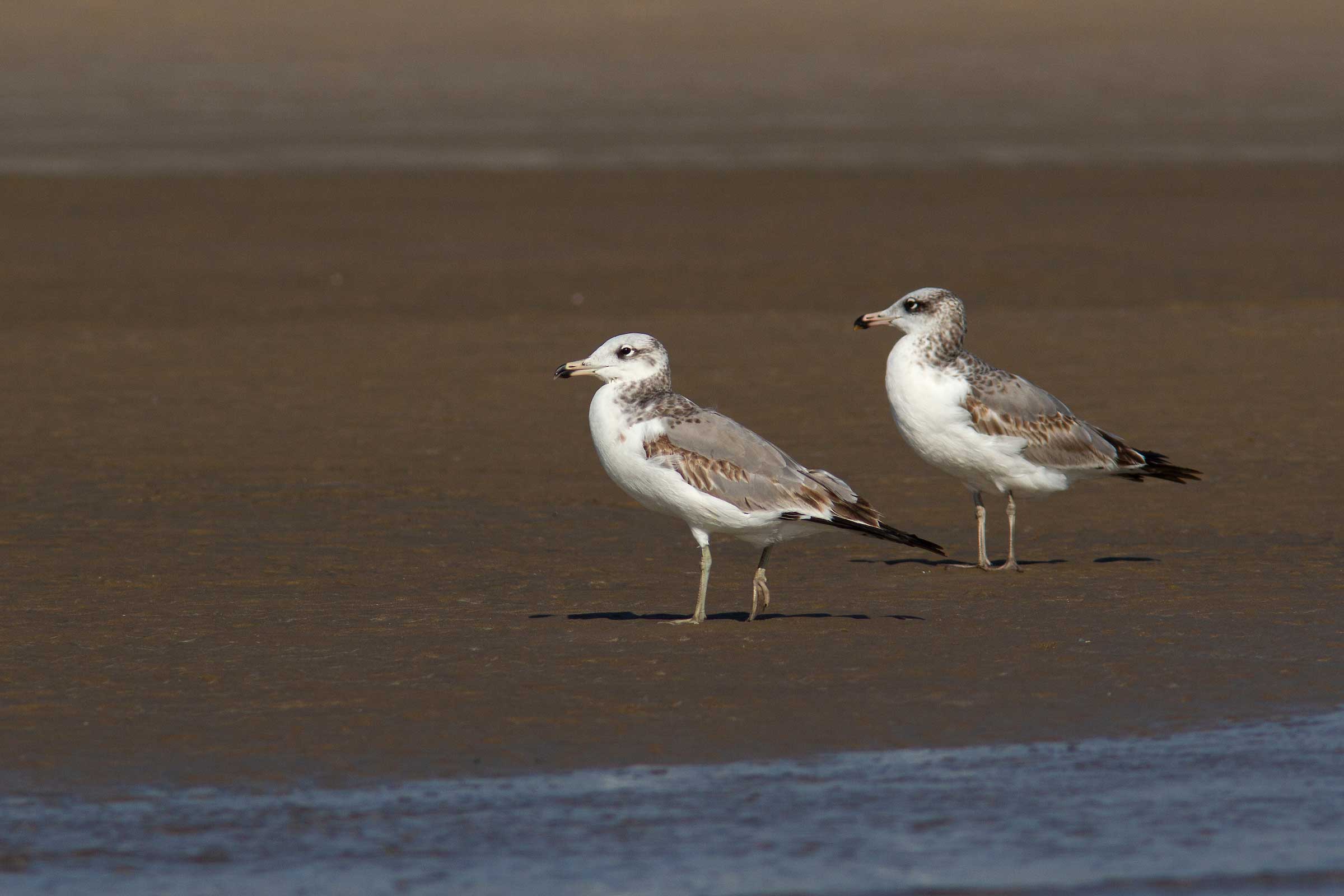 A Pallas’s gull (left) and juvenile Heuglin’s gulls (right), locally known as the moto dhomado and kalipith dhomado, respectively, stand near a waterbody at Modwa in the Gulf of Kutch,. “Fishing activity around the village attracts diverse species of gulls to Modwa. I have once seen a few hundred gulls flying around a fishing boat here,” said Shreeram MV. The third-largest gull species in the world, Pallas’s gull, is identifiable by the distinct white crescent marks around its eyes and a red spot at the tip of its bill. Its diet comprises fish, insects, crustaceans, and small mammals; it may also prey on nesting birds, their chicks and eggs. Another large species is the Heuglin’s gull, which feeds mainly on molluscs, worms, and crustaceans. The colours on the upper back of adults are one of the features that help in identifying gulls. But identification is more difficult in juvenile birds (right) of different species as they tend to look very similar to each other. Photos: Shreeram MV 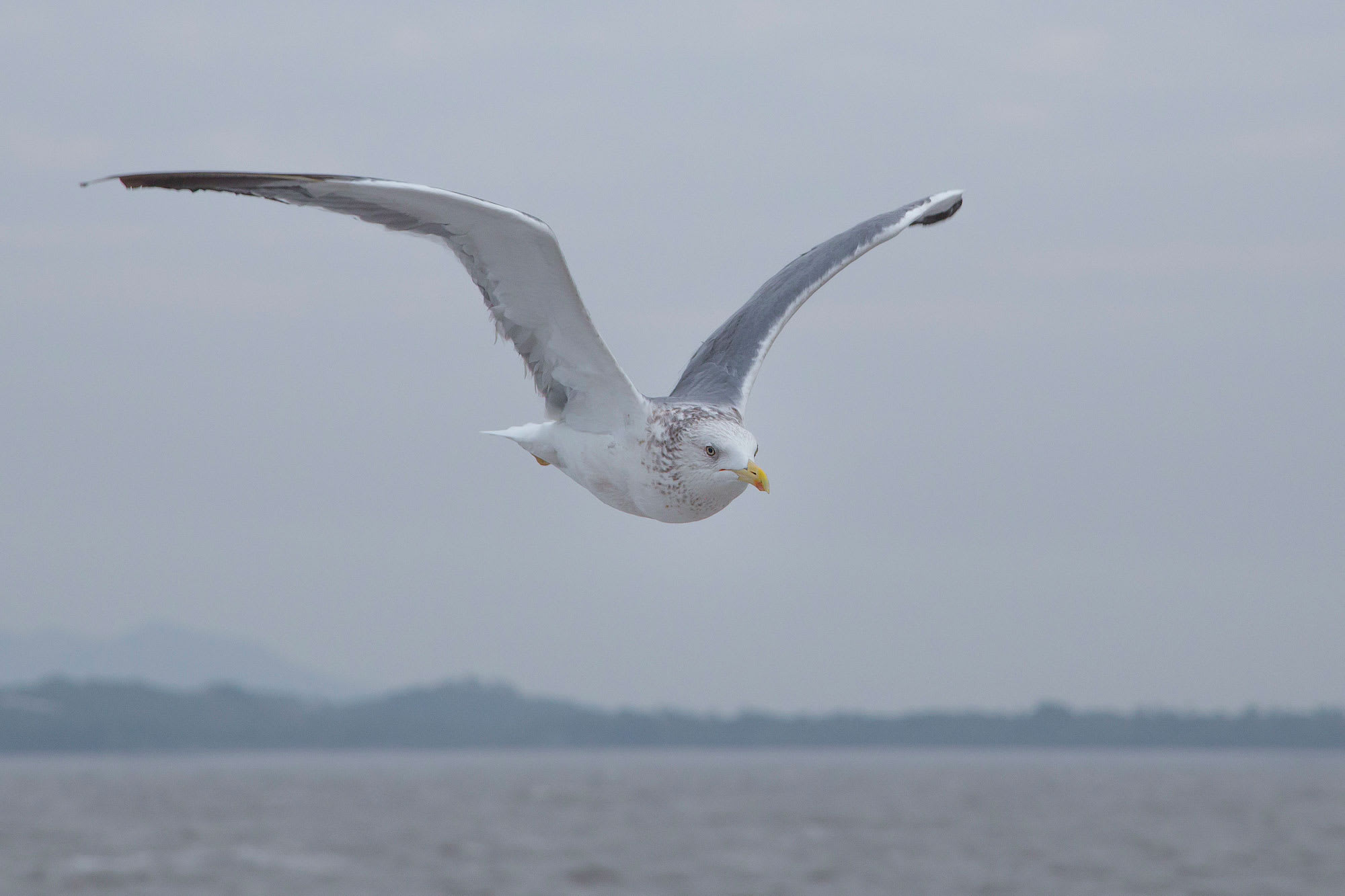 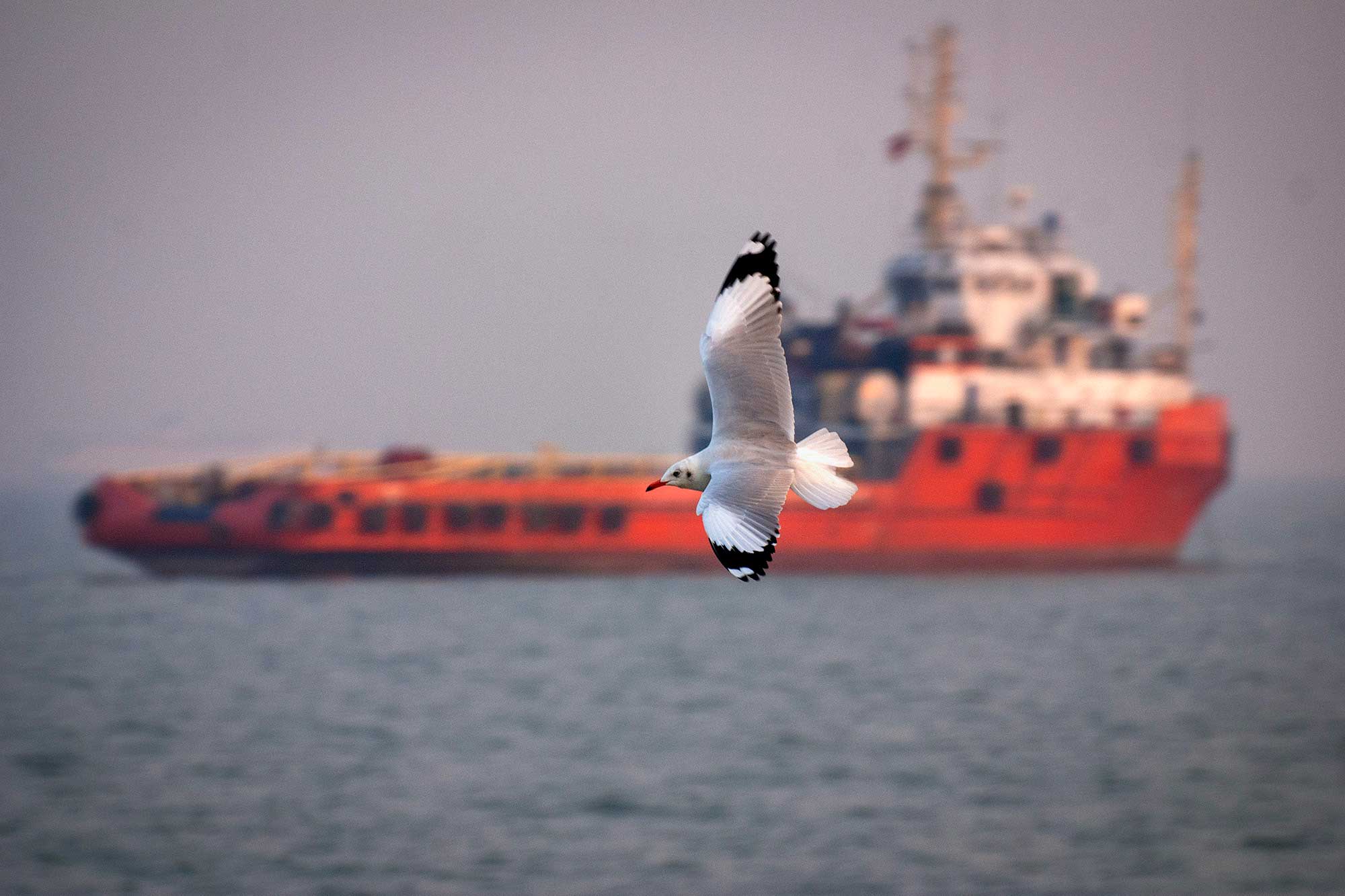 A steppe gull (top left) and a black-headed gull (top right) fly near the coast of Mumbai. Gulls along this stretch of waters are known to fly alongside ferries (above) in anticipation of snacks offered by passengers. An innocuous pastime for tourists, the practice, unfortunately, alters the natural behaviour of these birds, who learn to associate humans with food and develop a taste for unhealthy snacks. But it is not just in Mumbai that gulls are looking for handouts. “Gulls have become habituated to taking food from people’s hands in places such as Bet Dwarka in Gujarat and Varanasi in Uttar Pradesh too,” adds Dr Kumar. Photos: Saurabh Sawant (top left), Mayank Soni (top right and above)