Burrow Down, Sleep Tight: The Fascinating Life of the Himalayan Marmot

Himalayan marmots hibernate for six to eight months a year, but what do they do when they’re awake?

Most of us have observed squirrels at some point, watched them nibble on food, groom their bottlebrush tails, and scurry up branches and electric poles with speed and agility. They seem perpetually busy. The Indian palm squirrel — the one with three white stripes on its back — is generally seen around trees in south India and Sri Lanka, and eats largely tree fruit, seeds, and insects. In north India we have five-striped palm squirrel. But there are over 200 species of squirrels, and each has physiological adaptations suited to its diet and habitat.

Among the many members of the squirrel family, is the Himalayan marmot, found in high altitudes of India, Nepal, Pakistan, and China, between 2,900 and 5,500 m. Unlike tree squirrels, marmots are ground-dwellers that live in open grasslands and nest in burrows underground. They have a thick coat of fur to protect them from the cold of the high mountains, but even that doesn’t suffice when winter arrives, turning the craggy habitats of many of the regions in Ladakh from brown to brilliant, snowy white. The views are beautiful to behold, but hard to endure, especially for species like marmots that subsist on ground flora, which die out in the winter.

To survive, Himalayan marmots hibernate for anywhere between six and eight months every year. “In some of the colonies that we follow, hibernation begins around September-end to October-end, and lasts until mid-April to mid-May,” says biologist Nandini Rajamani, who has been studying marmots in Ladakh for about three years. But the hibernation duration varies, depending on locations and topography, since it is known to be linked to weather. “All species of marmots have compressed annual life-cycles, with their behaviour and activity confined to a 4-6-month window,” says Rajamani. This means they mate, birth, and parent in a relatively short span of time, compared to other species. All in all, Himalayan marmots are fascinating for the ways in which they have evolved to survive in their harsh habitats. 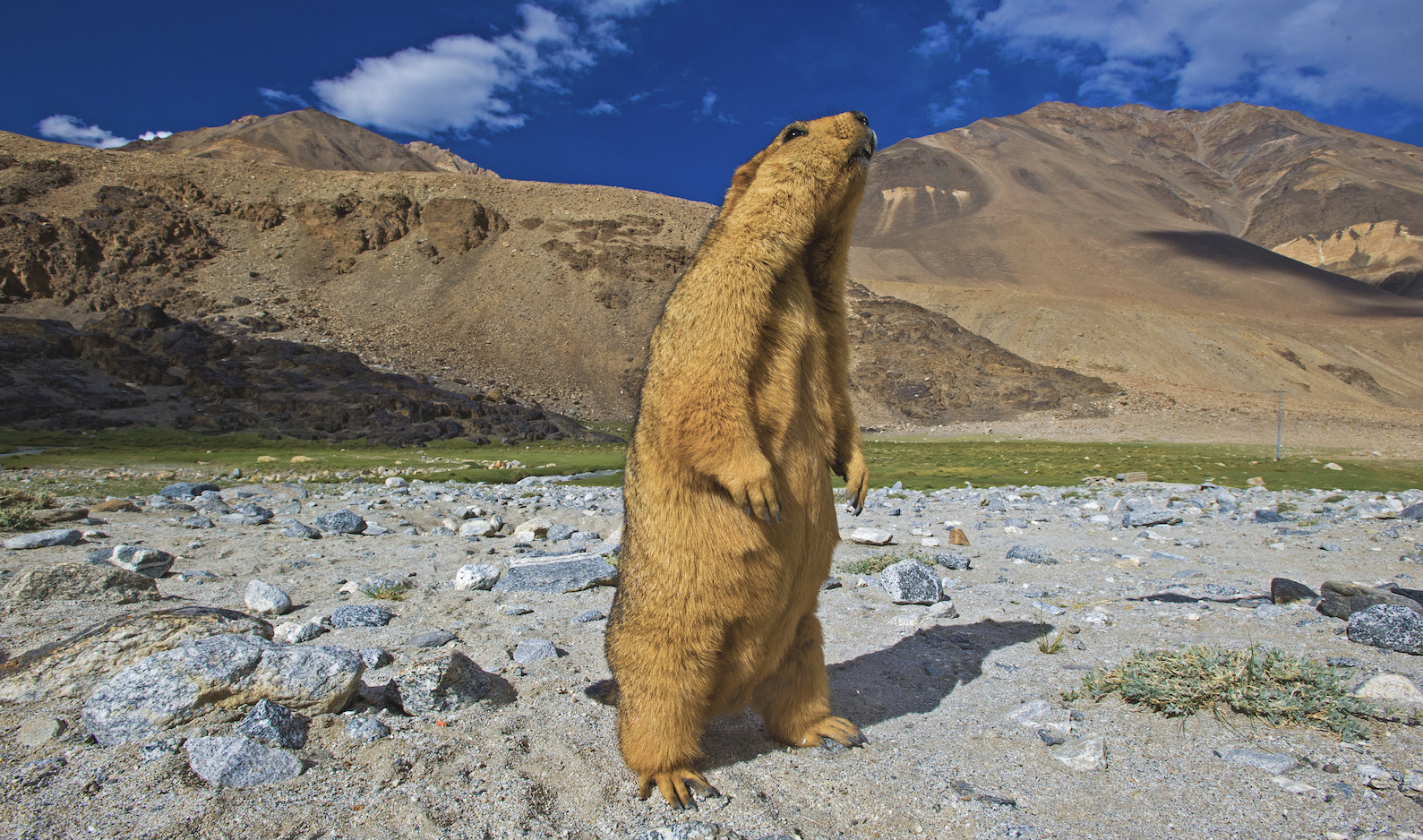 When they aren’t hibernating, marmots emerge from their burrows when the sun is out. “The first thing they do is defecate,” says Rajamani, “then eat, and socialise, though the order is flexible.” When the intensity of the sun increases, marmots return to their burrows, surfacing once more in the evening hours. They spend much of their time play-wrestling. Photo: Dhritiman Mukherjee Two species of marmot are found in India: the long-tailed marmot (Marmota caudata) and the Himalayan marmot (Marmota himalayana), pictured here. In India, Himalayan marmots are found in Ladakh, Himachal Pradesh, Uttarakhand, Arunachal Pradesh, and Sikkim. Cover photo: Dhritiman Mukherjee

Both male and female marmots engage in wrestling to establish dominance, says Rajamani, and interactions can vary in intensity. “It is mostly play with young ones, but the larger the animals, the more serious the consequences.” Males for instance, display aggression when members of other colonies approach their territories, while females might display territorial behaviour after they have given birth to a litter. Photo: Saurabh Sawant

Young Himalayan marmots are born around end-May or June, and remain underground for a few weeks. They emerge from their home burrows around end-July, but stay close to their mothers for the first year. Males are around at this time, but do not actively participative in parenting. Marmots live in colonies and have an excellent lookout system to prevent their kin and friends from becoming food for predators such as dogs, foxes, snow leopards, and raptors. “Marmots have a distinctive alarm call, and will sometimes continue to call for half an hour after they see a predator,” says Rajamani. Photo: Shivang Mehta

Marmots spend the months preceding hibernation foraging for vegetation to eat and line their burrows. By September-October, they are “massive, and appear to be wearing thick coats,” says Rajamani. When a marmot — or any animal — is in hibernation, it is not really “sleeping”. Technically, hibernation is the period of dormancy, when the body functions of an animal slow down significantly. The metabolic rate drops, heart rate falls, and breathing reduces, but “it’s not the same thing as sleeping,” explains Rajamani, “because it can take marmots several weeks to wake up from hibernation.” Photo: Dhritiman Mukherjee

Members of a single colony can wake up at different times. “We think the younger ones hibernate longer,” she says, and “you can tell when marmots have just emerged, because they look shrunken, and hungry.” Studies show that marmots can lose almost a third of their body weight during hibernation. Photo: Surya Ramachandran

Marmots are very social. They live in colonies, “with anywhere between 2 and 15 inhabitants,” says Rajamani. “In some cases, it is easy to distinguish one colony from another, but in other cases, colonies really seem to run into each other.” Watch them long enough, Rajamani says, and “you’ll begin to notice that some animals approach each other, touch one another, and engage in grooming. This is how we establish that they are members of a single colony.” Photo: Supakorn Thammasiri/Shutterstock

Every colony has multiple burrows that vary in shape and size. Some burrows are a simple depression under a rock, while others might be a network of inter-connected tunnels that go several metres below the surface. Researchers can tell if a burrow is active by the presence of fresh scat. On the contrary, says Rajamani, “if there are cobwebs around the holes, and plants growing out of it, then chances are it’s not being used.” Photo: udeyismail/Shutterstock 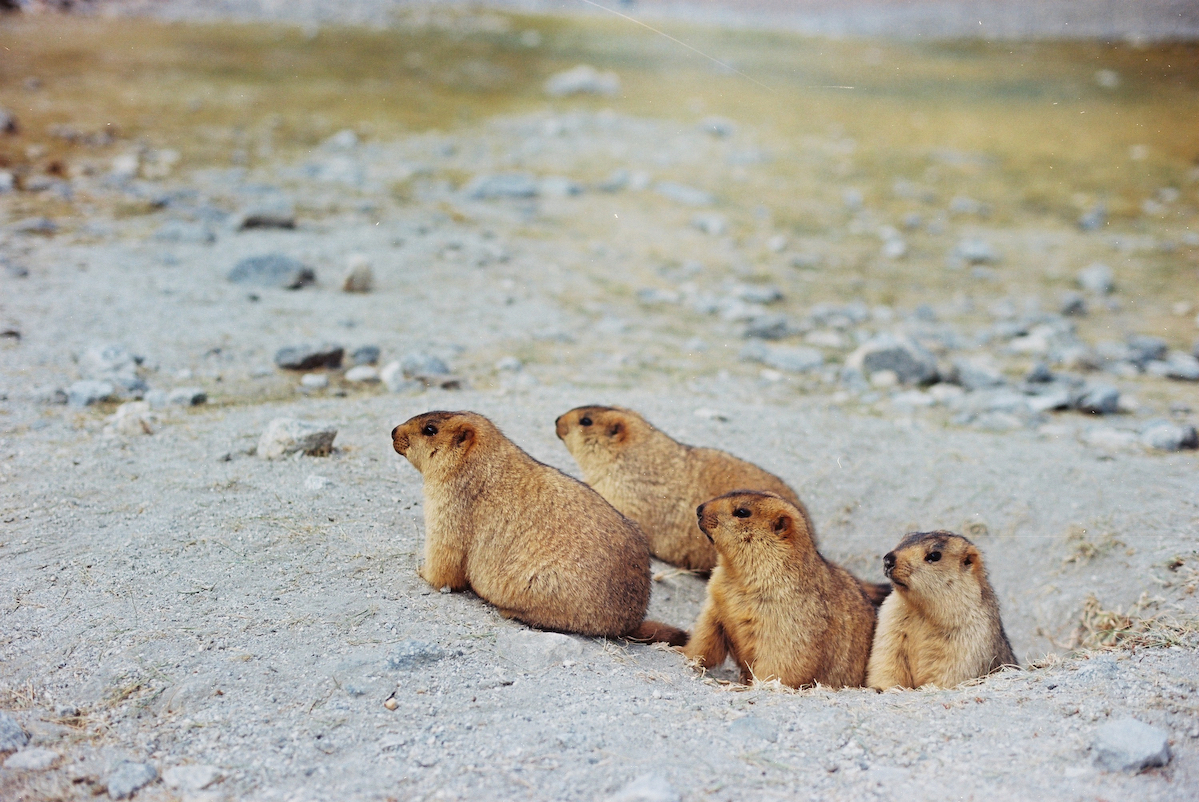 To get a glimpse of marmot life underground, Rajamani and her team have done some exploratory work with cameras, like those used in endoscopies, but “research is still in a nascent stage.” For now, much of what we know about the Himalayan marmot is restricted to their time above ground, which is less than half their lives. Until we know more, conservationists and wildlife lovers hope that tourism and infrastructural development in high-altitude regions like Ladakh and Spiti Valley won’t impact their habitat too much, and that we will continue to see these chubby, wrestling squirrels of the high mountains for years to come. Photo: TAVISA-WM/Shutterstock