Man and Wild: The Complicated Coexistence of Humans and Hoolock Gibbons in Assam

Once upon a time, in the Tinsukhia region of Assam, an ape named Kaliya became a regular visitor to the village of Ketetong

The hoolock gibbon, the only ape species found in India, is an incredibly shy creature, and spotting one in the wild is considered a rare treat. It is strictly arboreal which means it spends most of its life on trees, swinging along high canopies without setting a foot on the forest floor for months. This is exactly what makes places like the Barekuri and Ketetong villages of Assam so special.

Barekuri is bookmarked by wildlife enthusiasts for its population of western hoolock gibbons, a sub-species of the ape found in the northeastern states of Arunachal Pradesh, Meghalaya, and parts of Assam. Once a lush, contiguous forest, Barekuri now encompasses a number of villages, and is home to hundreds of human beings, and about two dozen hoolock gibbons. What makes the gibbons of Barekuri remarkable, is that they have a thriving relationship with the village residents. Wildlife photographer Dhritiman Mukherjee was sure “the story of coexistence was an exaggeration,” when he first heard of them in 2008.

Since then, Mukherjee has returned to photograph the gibbons of Barekuri a number of times. “I think this concept of separate spaces for animals and humans is becoming increasingly unviable,” he said on a telephone interview from Kolkata. “Of course, this cannot apply to all species, but it is possible with some.” Instead of Man vs Wild, he proposes, “Let us look at Man and Wild.”

Gibbons are striking primates, characterised by long, strong arms that they use to swing from trees. The western hoolock gibbons of Barekuri have inhabited this region for decades, some say centuries. In fact, the animals even find mention in old folk songs and stories from the area.
Cover Photo: The documentary has footage of Kaliya wandering in and out of homes in the village, drinking water from the pump, even playing with puppies. In some ways, Kaliya was more human than primate. One of her favourite activities was to pick lice, a service she would extend to most members of the village, from the little babies to toothless grandmas. “She was totally comfortable with the members of the family,” Dhritiman remembers of his time there. “Honestly, I couldn’t believe what I was seeing, because Kaliya is not domesticated, she was coming and going on her own.”

Hoolock gibbons are strictly arboreal, and spend most of their time swinging through the forest and foraging for food. In Barekuri, the primates also venture into orchards and backyards of homes. Sometimes the residents feed the gibbons a banana or two, and sometimes the gibbons help themselves without being offered.

As forest habitats shrink and human inhabitation increases, more species are venturing out of their forest canopies into semi-rural landscapes like plantations and villages like Barekuri that have maintained their tree canopy. As the landscape of Barekuri has changed, so has the diet of the gibbons in the area. In addition to wild berries and wild figs — largely considered inedible by humans — the apes now eat guavas, mangoes, bananas, and many other fruit that grow in the village. 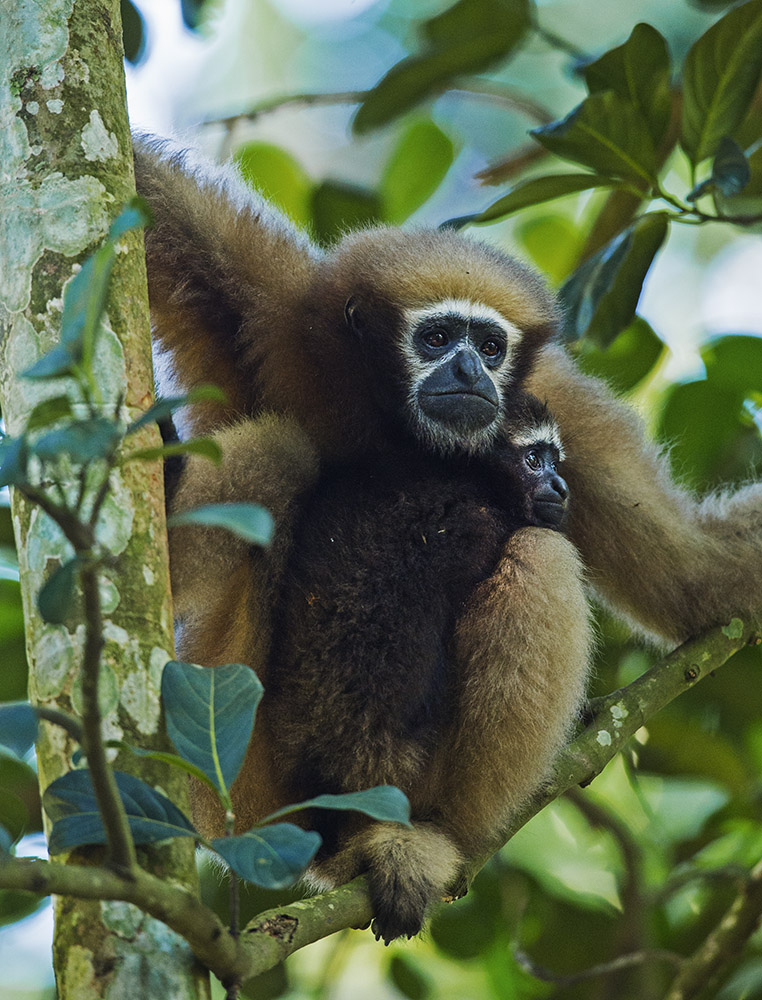 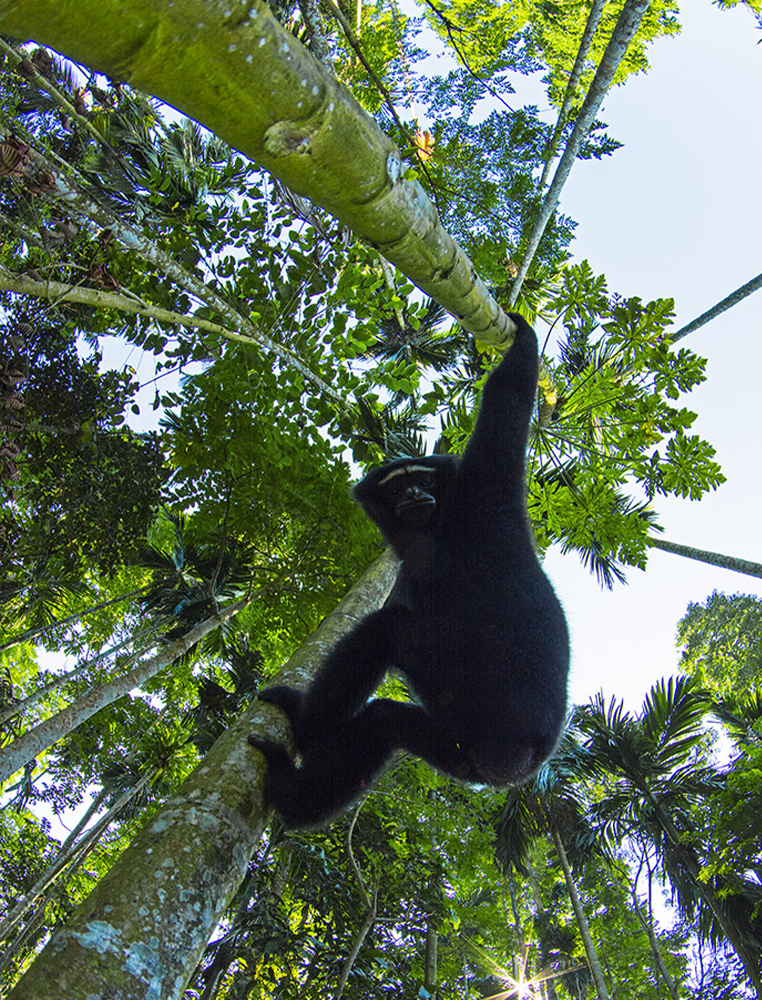 Male and female western hoolock gibbons are differently coloured. Males are coal black, while females have pale, brown-blonde fur. Both are characterised by white markings on the face, which develop as they age. 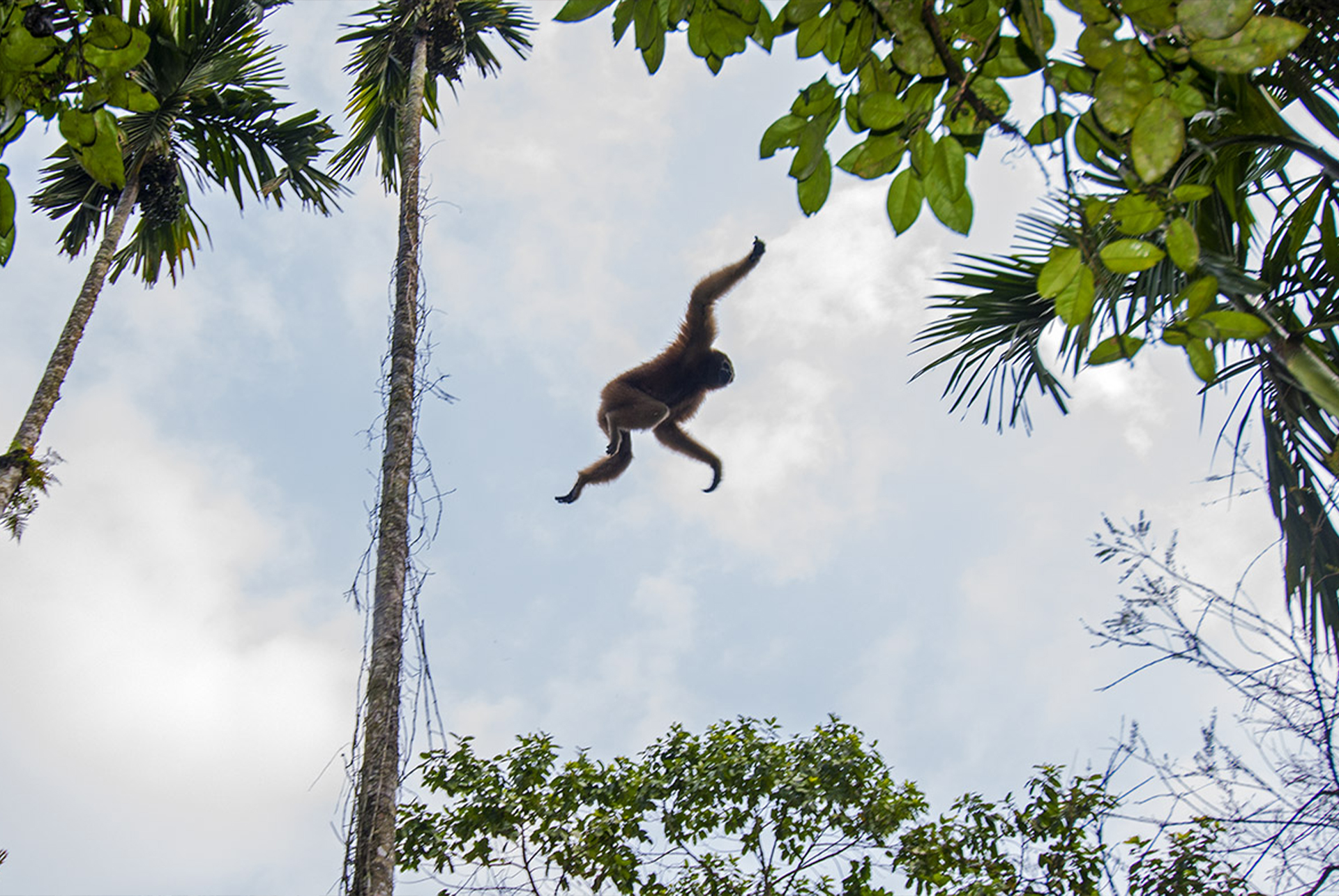 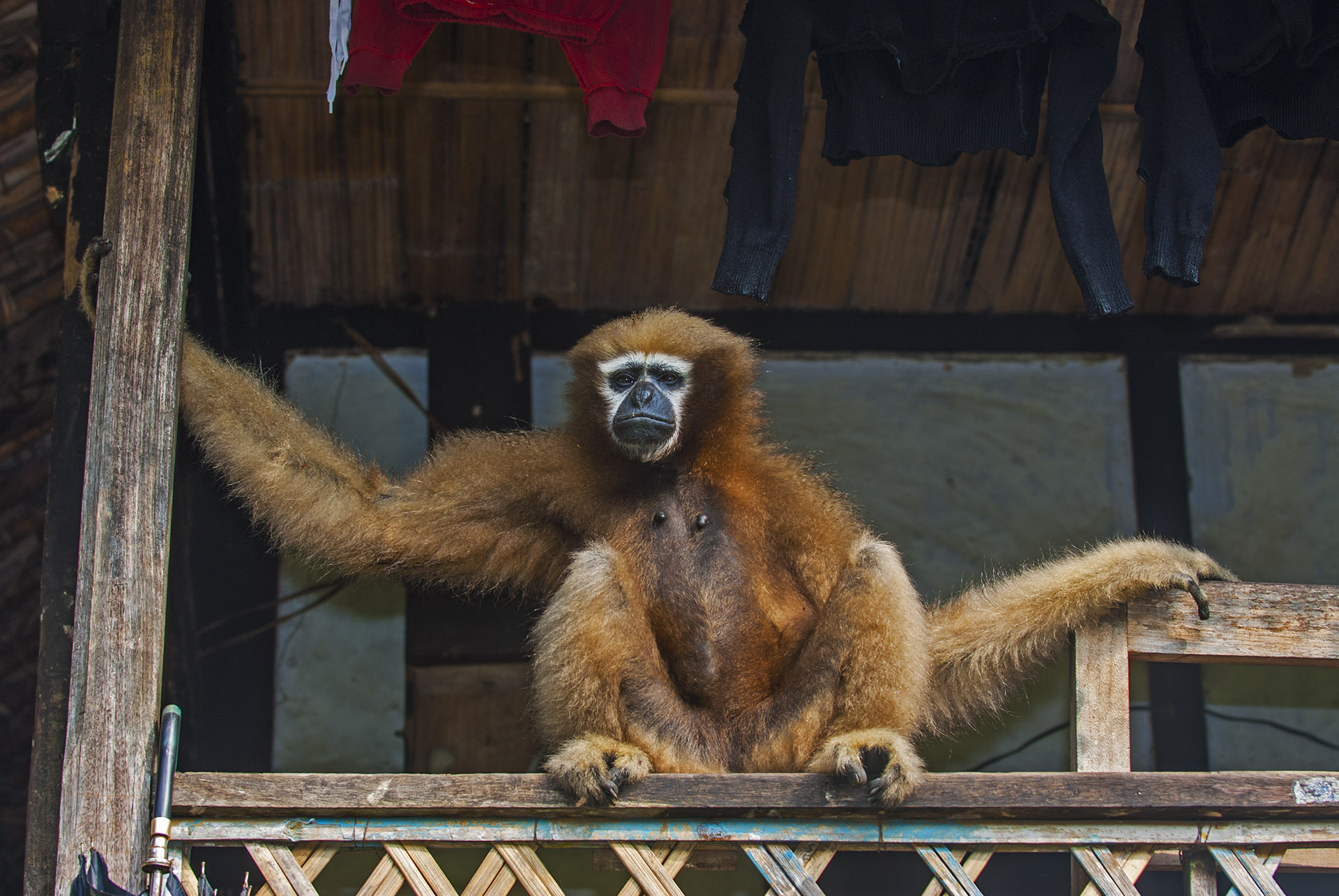 This is Kaliya, an adult female from Ketetong village, a settlement near the industrial town of Margherita in Assam. Kaliya belonged to a troop of western hoolock gibbons that roamed the forest on the fringes of the village, until a group of hunters spotted the primates and thought they might make a good meal. Orphaned and abandoned, young Kaliya begun to spend her time in and around Ketetong village where she became something of a fixture. “She would show up every morning, between five and six,” says Amiyo Ninga in the film, The Lost Gibbon. “Like a sweet alarm clock.”

One day, about thirty years after she started visiting Ketetong, Kaliya bit the hand of a child from the village. Provoked by the display of aggression, the boy’s father and uncle, hit her with a stick, cracking her skull, and killing her shortly after. It is a tragic tale to a story that seemed to brim with hope, and a cautionary tale of coexistence.

Ketetong no longer has any gibbons (though pictures of Kaliya are still kept in some homes), but Barekuri is still visited by 20-odd western hoolock gibbons that are the pride of the village. “Our only chance is planning,” says Dilip Chhetri, a primatologist working in Assam. “Through planning and community involvement, we can ensure the gibbons have their canopy and food sources, and human needs are also taken into account.”