In Stages: Metamorphosis in the Insect World

Looking at the lifecycle of insects, it’s clear that each has a unique evolutionary success story, with change the only constant 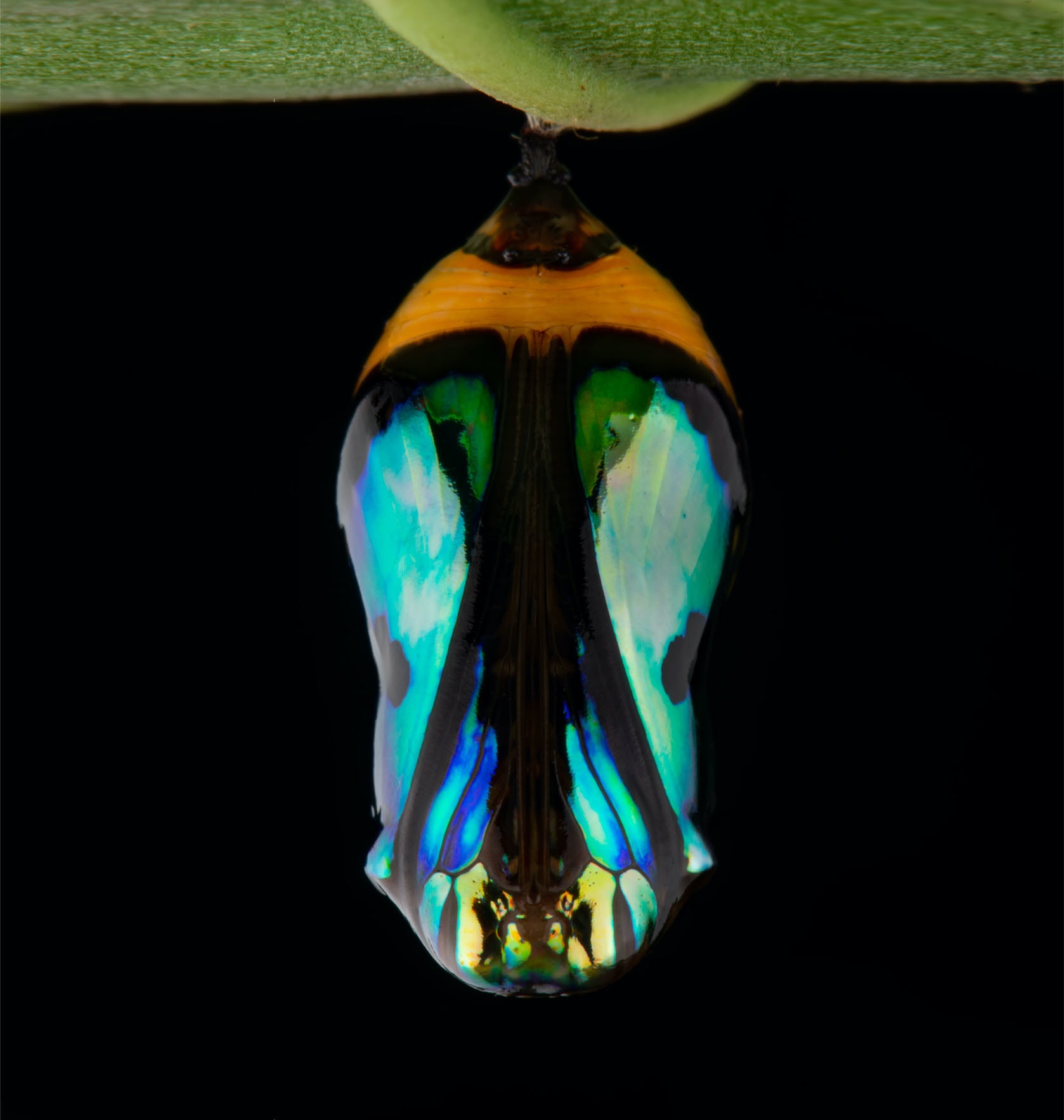 Insects represent over half of the earth’s biodiversity. There are nearly a million species! Some estimates, like the one published by The Royal Entomological Society, approximate that for every human on earth, there are roughly 1.4 billion insects. These numbers seem less staggering when you pause for a second and think about all the insects you met today (wittingly or otherwise). Between the butterflies that visit your plants or garden and the ants that clean up after you, you are likely to start losing count. Each insect species plays a critical role in maintaining the balance of entire ecosystems. Likewise, each insect has a unique evolutionary story behind its success. While these stories are as varied and diverse as the insects themselves, there is one popular path employed by approximately 65 per cent of all known insects — metamorphosis.

As Albert Einstein once remarked, “The measure of intelligence is the ability to change”. What drove insects to make such drastic transformations within a single lifetime? To answer that question, we go back roughly 480 million years — to a time most estimates suggest insects first inhabited the earth. For the next 80 million years or so, they remained ametabolous (i.e. without metamorphosis) and seemingly did not go through significant morphological transformations as part of their life history. They would look like miniature versions of themselves and grow in size from one moult to the next. Around 400 million years ago, something remarkable happened in the insect world — they evolved wings! Wings allowed insects to evade predators better, disperse populations further, and look “fly” while doing it. However, with wings came developmental difficulties like moulting with fully developed wings. These pressures gently nudged winged insects (Pterygota) to emerge from their eggs as juveniles with wing pads that would eventually develop into fully functional wings when they became adults. Pterygota evolved to stop moulting once they took on their adult form (final moult) in order to avoid further issues with trying to moult with fully developed wings. With no pupal stage (hemimetaboly), this partial or incomplete metamorphosis is widely regarded as the first evolutionary step towards the more elaborate four-stage metamorphosis (holometaboly) that we learn about in school.

The biggest benefit of this clever adaptation of metamorphosis is that it allows the same species to operate in different ecological niches at various life stages. How does that help? Less competition for resources within a species. When ditch jewels (Brachythemis contaminata) emerge from eggs, their nymph form is aquatic. From gills that allow them to breathe underwater to propulsion systems that allow them to efficiently hunt small prey like mosquito larvae and tadpoles, aquatic nymphs or naiads are well-adapted for life underwater. Photo: Ripan Biswas Cover photo: Chrysalis (pupa) of a common crow butterfly. Photo: Vipul Ramanuj 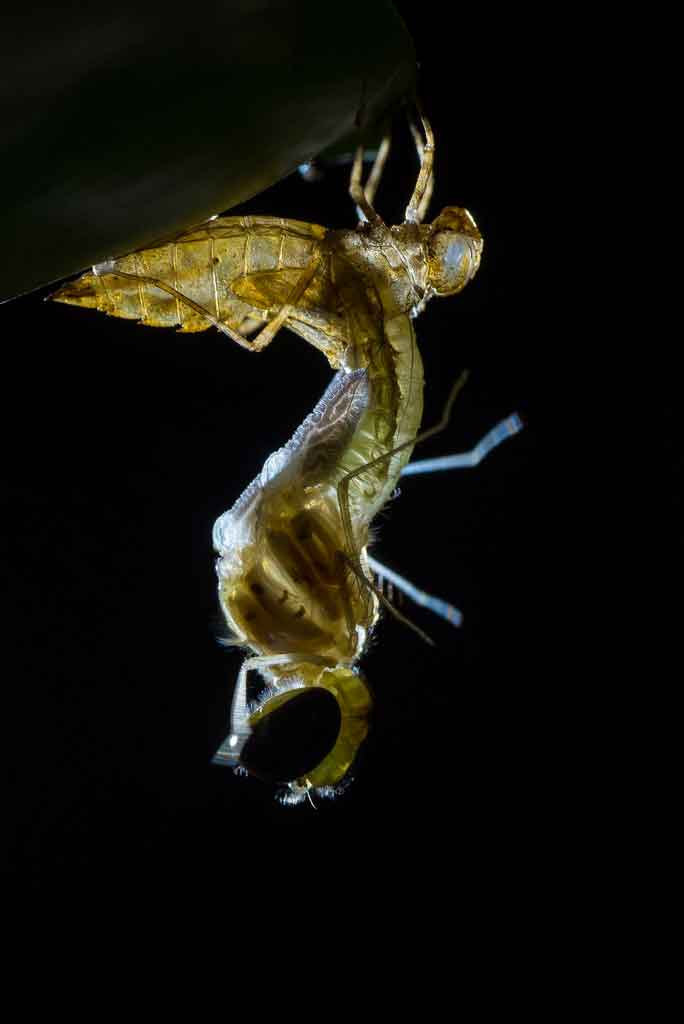 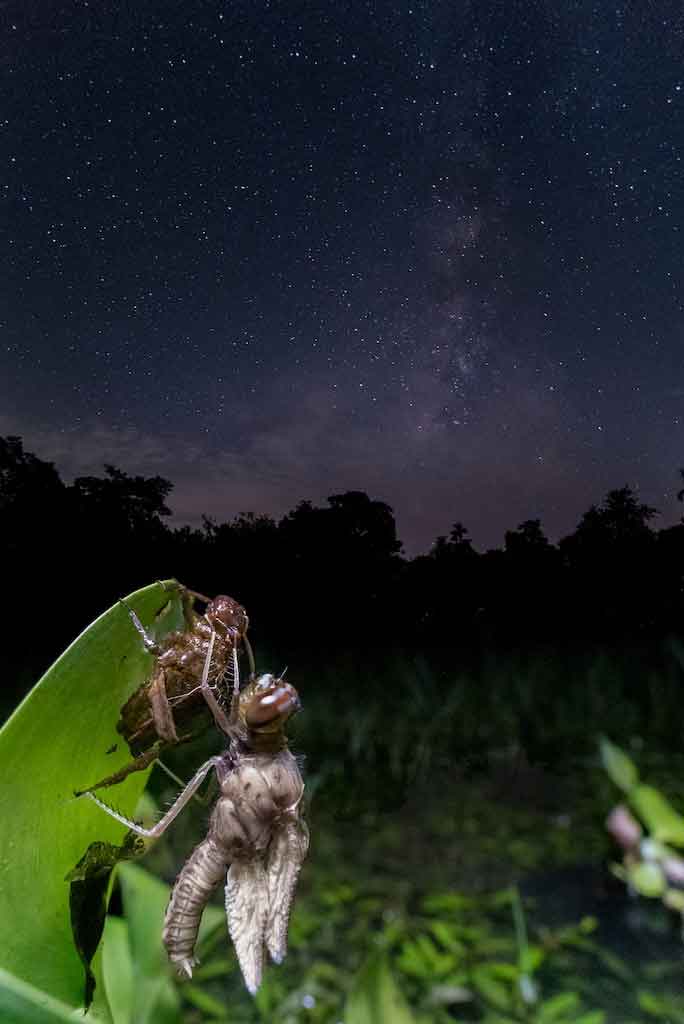 When a ditch jewel is ready to move from its aquatic form to reinvent life as a flying predator, the nymph slowly emerges from the water under cover of night to begin the final moult of its life. Ditch jewels are typically found in and around slow-moving streams, stagnant lakes and small ponds. The nymphs climb onto low-lying vegetation in the waterbody to begin their transformation. (Top left) From its well-anchored position on a leaf, the ditch jewel bends backwards to release its body from its exoskeleton (exuvia) until only the tip of its abdomen is left inside. As its new exoskeleton begins to harden, it perches back onto its now fully shed exuvia and begins to breathe. As air flows into the body, the dragonfly’s body takes a rigid shape. Wings that were tucked away and hidden slowly emerge as a crumpled incipient mess (top right). However, as the ditch jewel pumps lymphatic fluid into the wings, they begin to take shape. In a matter of hours, the aquatic nymph transforms into a slender marvel of flight (above). Photos: Ripan Biswas 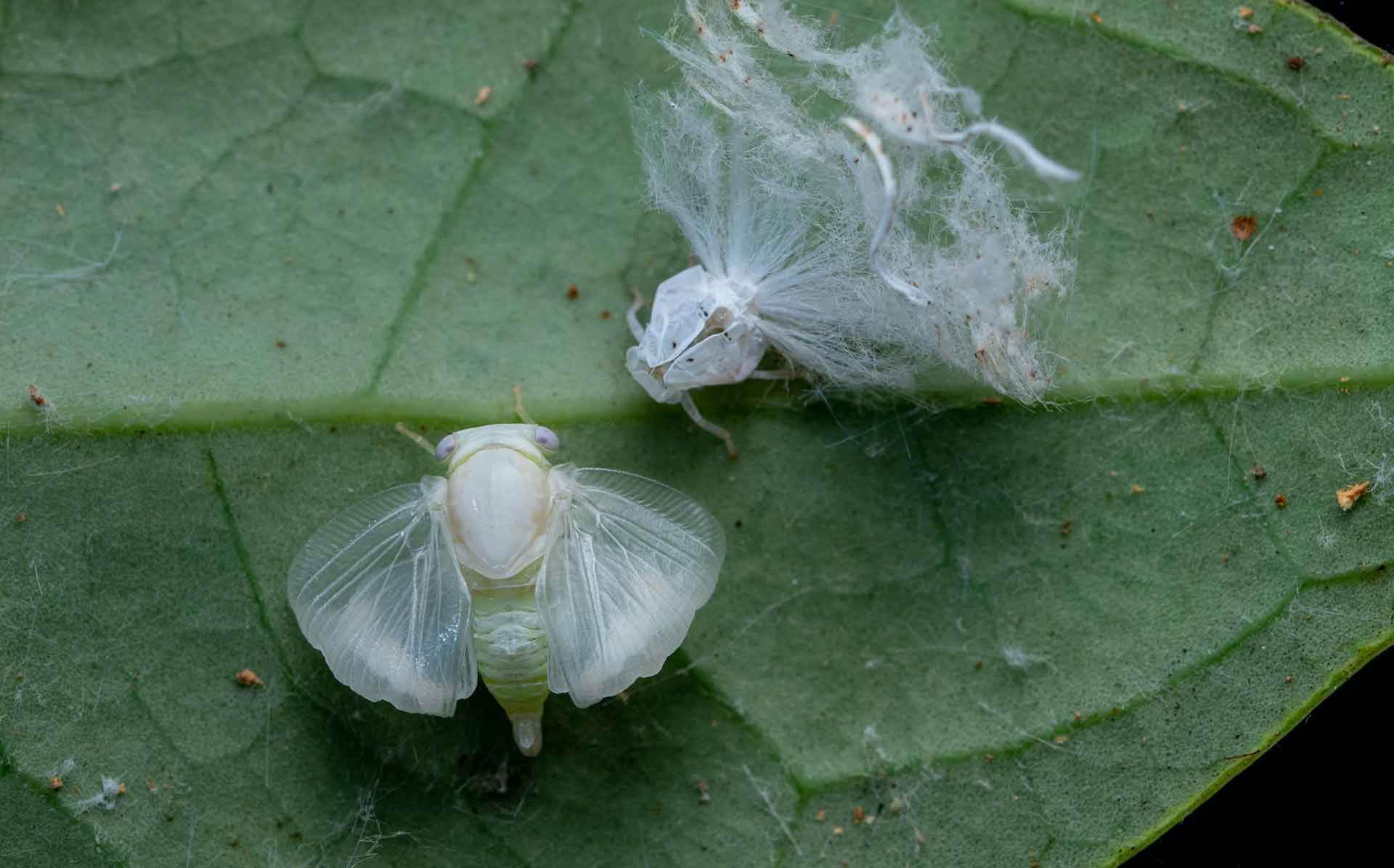 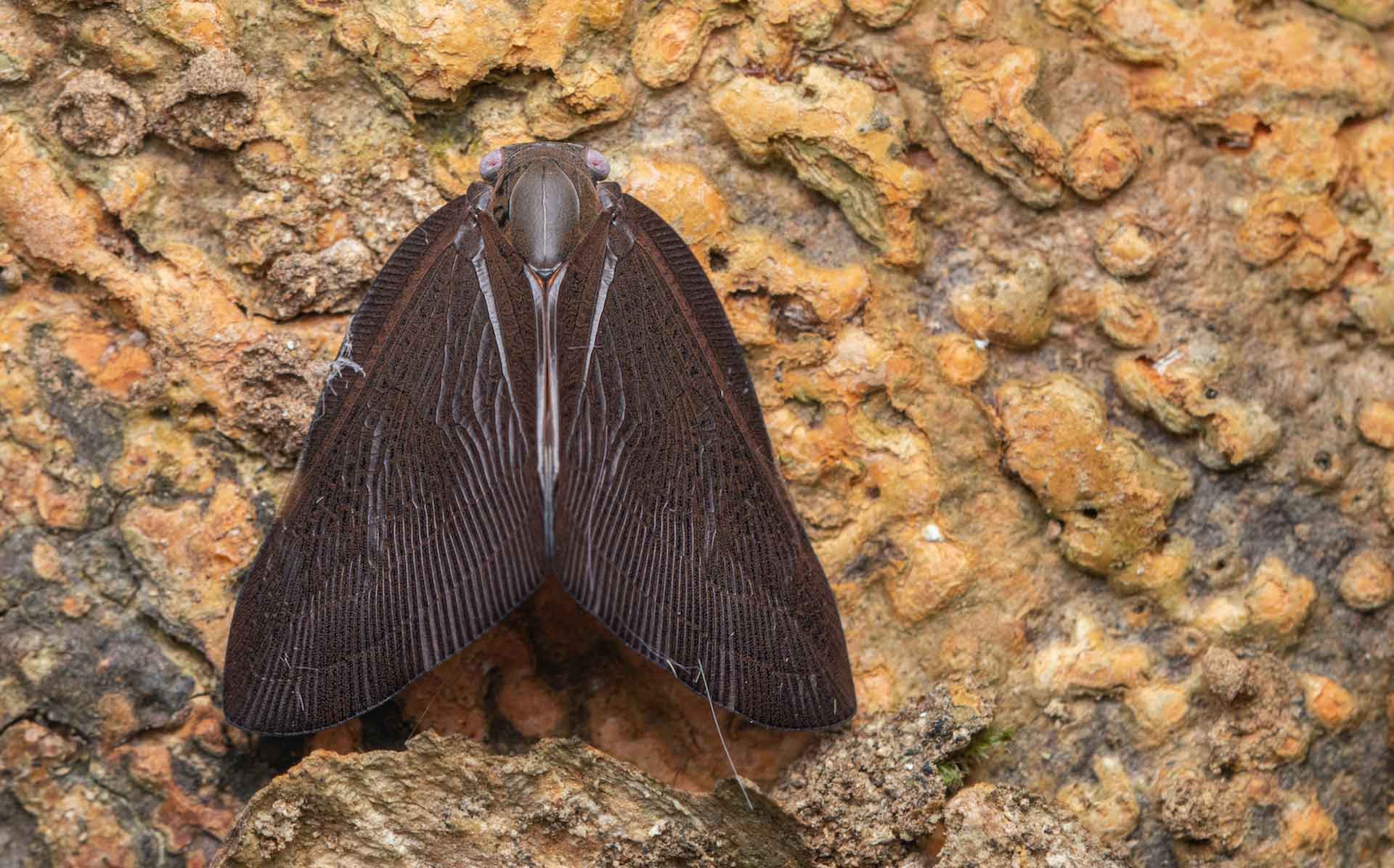 Like this planthopper from the Ricaniidae family, Hemipterans go through the same three-step incomplete metamorphosis (hemimetabolous) as dragonflies. However, in this less dramatic version, the planthopper starts with an egg that hatches into an adorable young nymph (left). The nymph typically looks like a miniature version of the adult (right) but lacks wings and reproductory organs. Ricaniidae nymphs are also known to produce a waxy hydrophobic substance that helps conceal the it from predators. The wax typically resembles frayed white hair standing up straight — think Albert Einstein touching a static electricity generator. Photos: Jithesh Pai 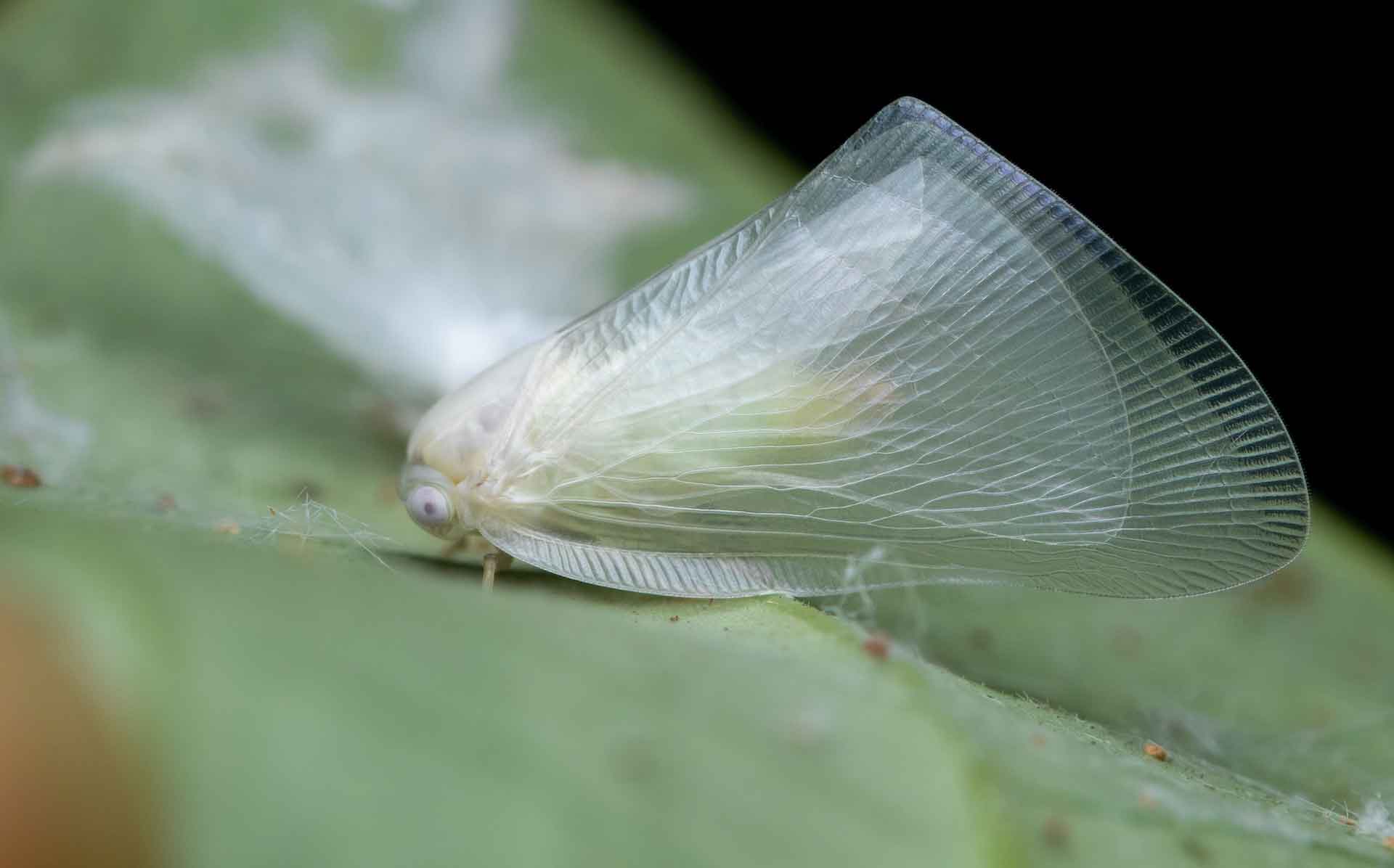 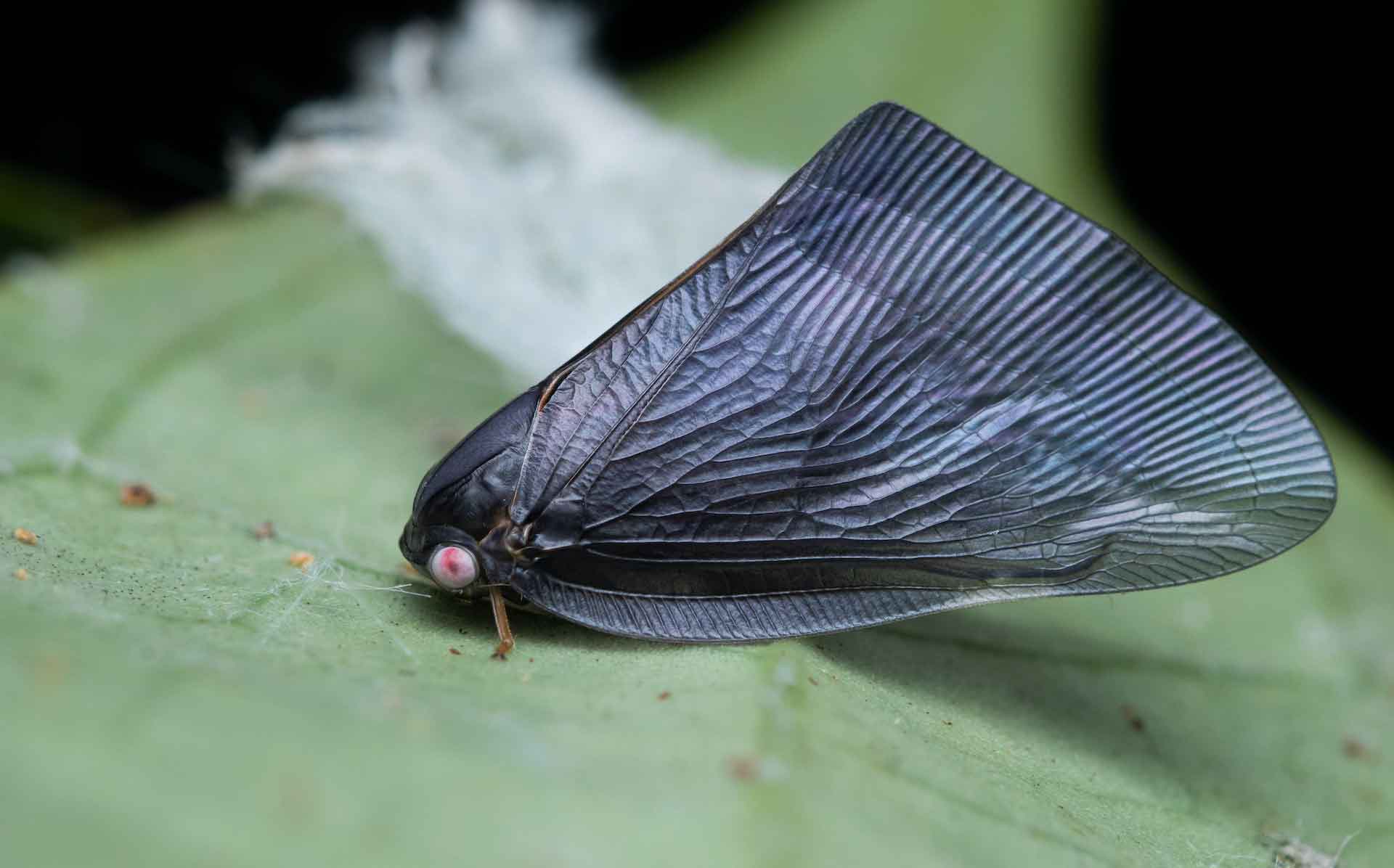 When the young nymph is ready to take its adult form, it finds a steady perch on a plant and begins the final moult. Slowly breaking free from its older exoskeleton, the Ricaniid now emerges with wings and functional reproductory organs. As the fragile wings slowly gain rigidity, the insect takes on its final adult form. Curiously, an aspect of the final transformation that is seldom discussed is the visually breathtaking change of colour that occurs in a short span of time after its emergence. The images of this Ricaniidae illustrate this dramatic shift in colour as the insect goes from a milky white (left) to a deep charcoal grey (right) in well under two hours! Photos: Jithesh Pai 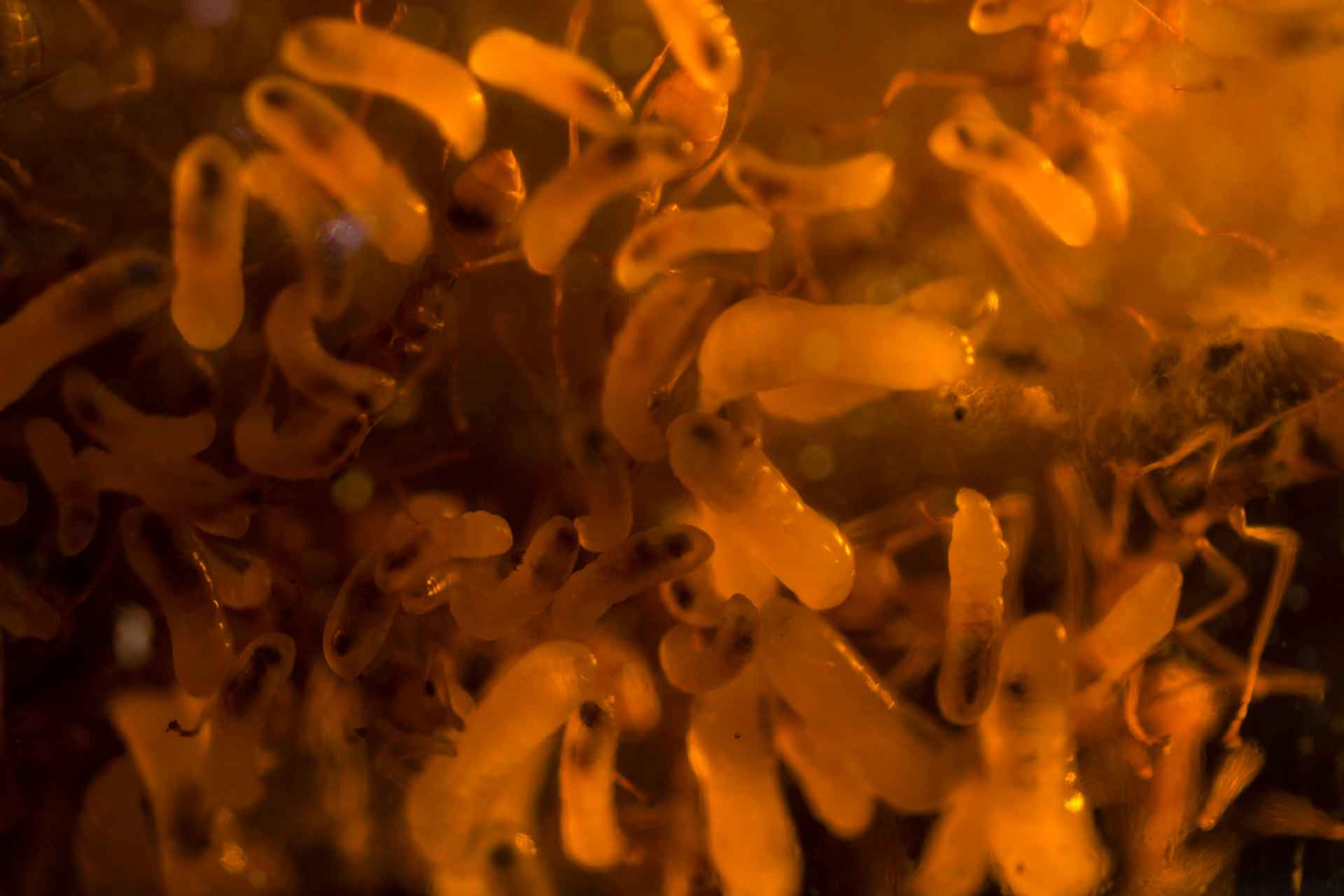 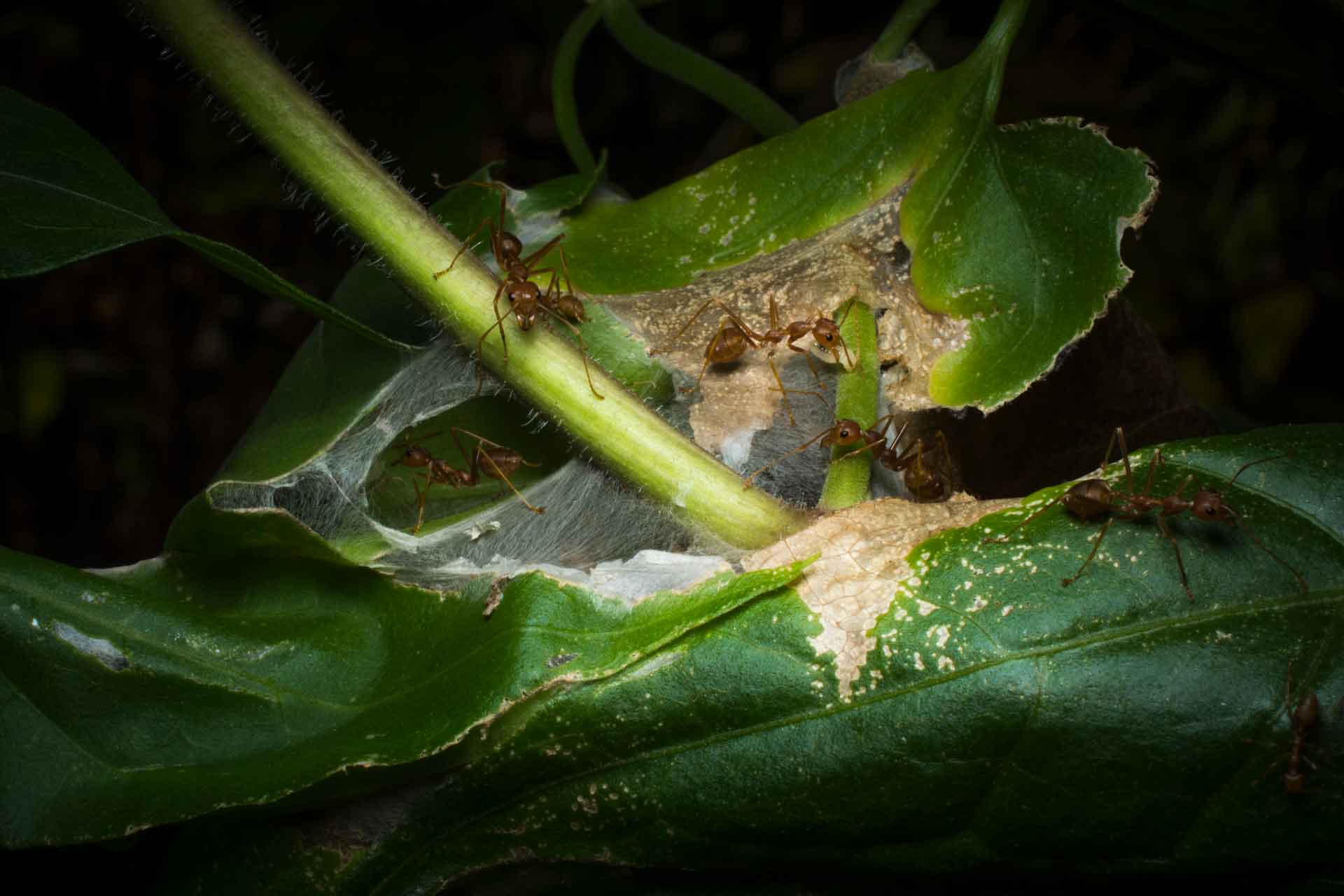 While some species only go through partial transformations of developing from an egg into a nymph and finally an adult, others go the whole four yards — egg, larva, pupa, and adult. Weaver ant (Oecophylla) queens lay clutches of eggs that develop into young larvae. After the first clutch of larvae develops into worker ants, they create nests for more eggs to develop into larvae, and ultimately, productive colony members. As seen in this inside view of a weaver ant nest, young larvae are suspended in an intricate network of silk (left). Wait, where did the ants get silk? Weaver ants belong to the subfamily Formicinae; the larvae of this subfamily produce silk that is typically used to create protective cocoons around themselves to safely mature into pupae and ultimately, adult ants. Weaver ants, however, provide enough shelter and care for their larvae to develop without a cocoon – leaving their larval silk available for use! Major workers of the colony carefully carry the silk-producing larvae to nest construction sites using their strong but gentle mandibles. The major workers then touch the larvae to trigger the release of silk, and walk across gaps and spaces that need to be woven together with silk (right). And just like that, weaver ants found a loophole in evolution’s metamorphosis system and used it to create queendoms in the canopy. Photos: Samuel John 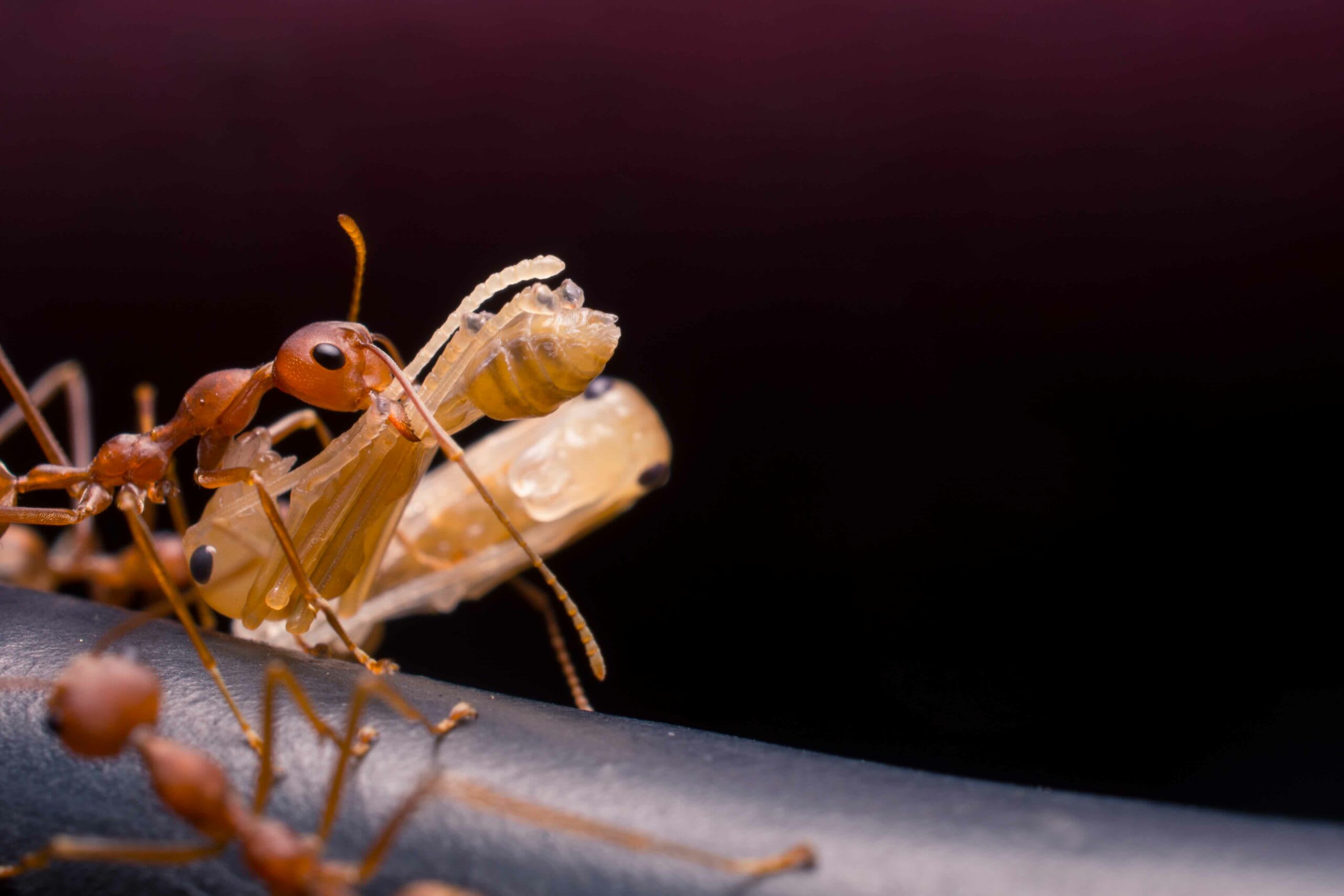 As a result of using up larval silk in the nest construction process, weaver ant larvae develop into “naked pupae”. In their naked pupal form, weaver ants are best pictured as albino versions of worker ants, doing six-legged demonstrations of the foetal position. As the pupa near their full transformation, they start changing colour from white to reddish-brown. Despite being the size of fully grown workers, pupae are completely immobile and receive the same levels of care as larvae in the colony. Seen here are pupae being rushed to a safer nest site in the colony when the neighbourhood mango tree was being harvested in summer. Photo: Samuel John

In the world of insects and metamorphosis, each story is as unique as the species. When a weaver ant matures into an adult, it resembles the popular reddish major and minor worker ant. However, when the colony matures fully, it produces reproductive members that look vastly different from their non-reproductive members. Reproductive males are small and black, while reproductive females are much larger and look like emerald stones with sprouted wings, as seen in this image. Photo: Samuel John

Stunners of the Feathered Kind in Singalila National Park