Every year, thousands of demoiselle cranes make their way from breeding grounds in Central Asia to the little town of Kheechan, on the fringes of the Thar Desert. And they are welcomed and well looked after

Adult demoiselle cranes (Grus virgo) weigh between two and three kilos, making them the smallest members of the crane family. And yet, these delicate birds, with their ash-grey feathers and regal eye plumes, are among the fiercest flyers of the avian kingdom. Every year, thousands of demoiselle cranes travel from breeding grounds in Eastern Europe, Central Asia, and Eastern China, to warmer parts of the planet, such as Iran, India, and sub-Saharan Africa where they spend the winter months. Studies estimate the distance they cover during migration is upwards of 5,000 kilometres.

Visitors to India arrive around September, flocking largely to the Rann of Kutch in Gujarat and the Thar Desert in Rajasthan, where they linger until March. Enthusiastic birdwatchers know this well and make a beeline for one place in particular: the small town of Kheechan (Khichan) in Rajasthan, three hours from Jodhpur city by road.

Kheechan is characterised by squat, brick-and-mortar structures, scrubby vegetation, and colourful homes dotted with water tanks and satellite television dishes. It is largely nondescript, save for winter every year, when the town hosts one of the largest gatherings of demoiselle cranes in India. In Gujarat, sometimes 50-60,000 cranes are seen together for a short period, particularly in Jamnagar.

The birds are found in two principal locations: the village talao or waterbody, and the compound of the pakshi chugga ghar, or bird feeding house, where sacks of grain are scattered every day for the cranes. This ritual of generosity is traced back to a Jain resident called Ratanlal Maloo, who began feeding the cranes and pigeons in his backyard sometime in the 1970s. Over time, the number of cranes increased and Maloo received a plot of land from the local panchayat to build a feeding area for his khurjas, as the cranes are locally called. Today, the initiative is supported by local farmers, traders, and birdwatching enthusiasts who visit the town every year. 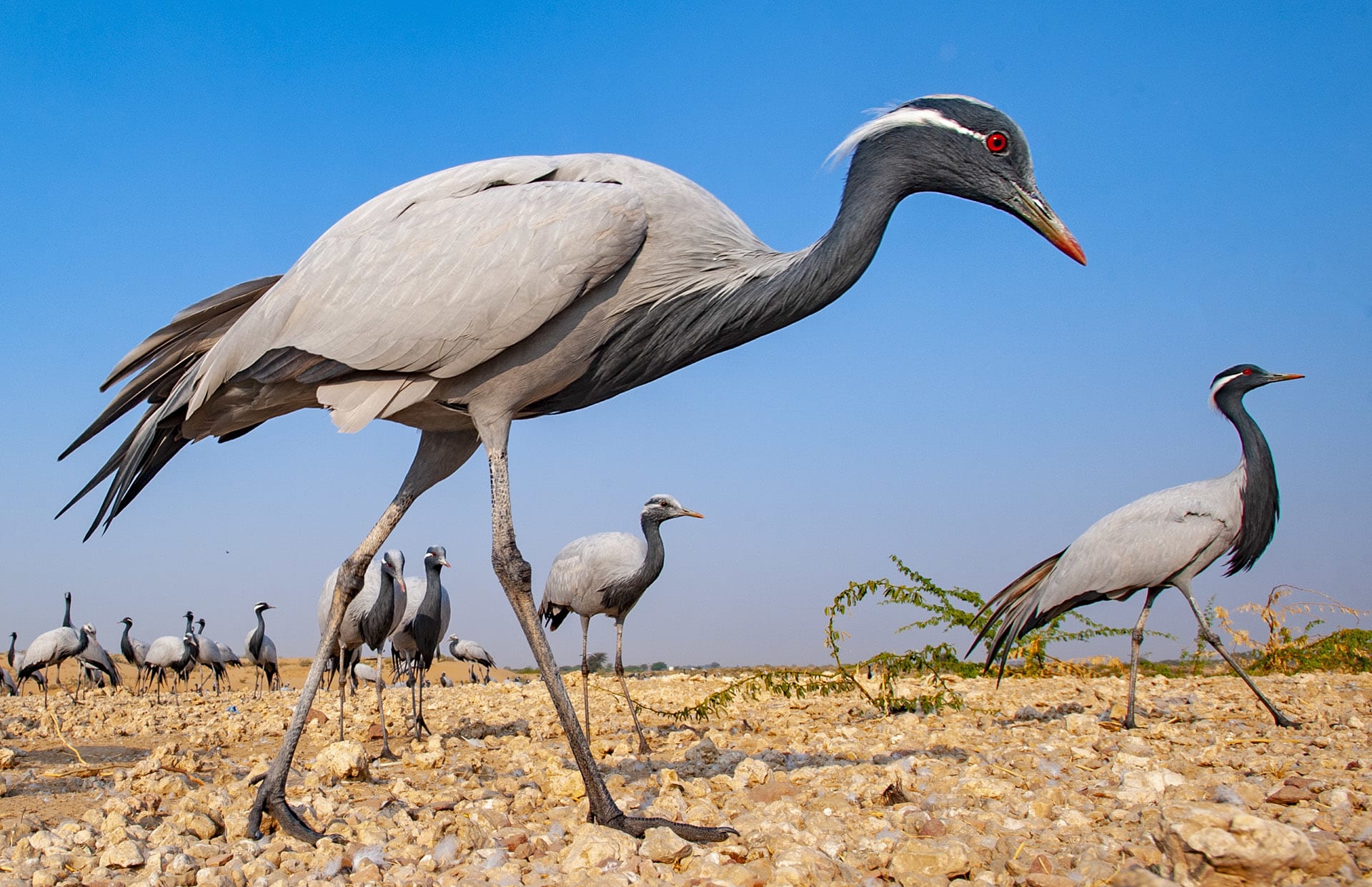 Demoiselle cranes are one of six species of cranes found in India. These migratory birds gather in Kheechan after the monsoon when waterbodies in the area are at their fullest. “Thousands of flocks of demoiselle crane reach [the] Thar Desert of Rajasthan every winter,” write HS Gehlot and others in the paper, Eternal Attachment of Demoiselle Crane to the Thar Desert of Rajasthan, published in Applied Ecology and Environmental Sciences. The study suggests that the population in India comes from “Siberia, China, Mongolia, Ladakh, Tibetan Plateau and travels through Afghanistan and Central Asia before coming to a halt at Thar Desert of Rajasthan in the north-western part of India.”

Their journey is long, arduous, and involves some seriously high-stakes flying. “During the migration between breeding and wintering areas, the demoiselle cranes must navigate some of the harshest physical barriers, such as the Taklamakan and Gobi Deserts, and the mountains of the Hindu Kush, Pamirs, Great Himalaya, Tien Shan and Karakoram, and the Tibetan Plateau,” write authors Hiroyoshi Higuchi and Jason Minton in the book, Bird Migration Across the Himalayas. Satellite tracking studies testify that they attain heights of over 7,500 metres above sea level (for scale, Mt Everest is 8,849m) while crossing the high mountains. 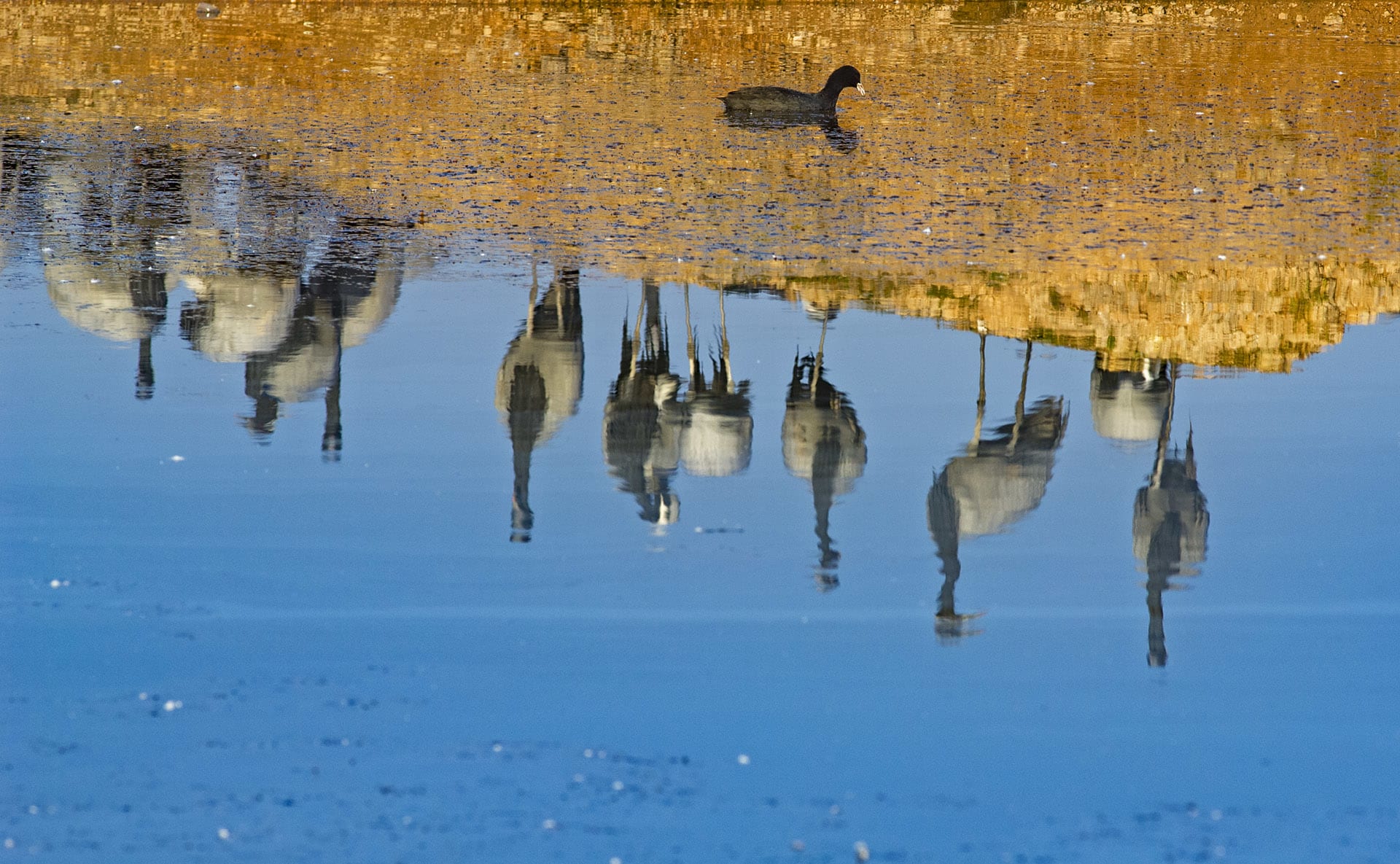 Demoiselle cranes are primarily wetland species. They like to breed in marshy areas, closer to the water, but are fine with wintering in arid areas like the Thar and Rann of Kutch, so long as water is a short flight away. In Kheechan, they settle around the village pond, gathering in flocks that number hundreds to drink water, rest, and generally hang around.

At the heart of the action in Kheechan is the bird feeding house, where volunteers arrive every morning to scatter grain for the birds. By breakfast time, the compound is filled with demoiselle cranes, emitting loud, honking calls. “It is very crowded,” says wildlife photographer Dhritiman Mukherjee. “But there is no conflict between the birds, no fighting, or pecking at each other. They are quite peaceful.”

Mukherjee remembers the discipline the birds displayed at the feeding house. “The cranes would visit the compound in batches,” he said. “While one group was eating the grain, the other birds waited in the sand dunes nearby. When the cranes in the compound were done eating they would fly away, and another batch from the dunes would take their place.” 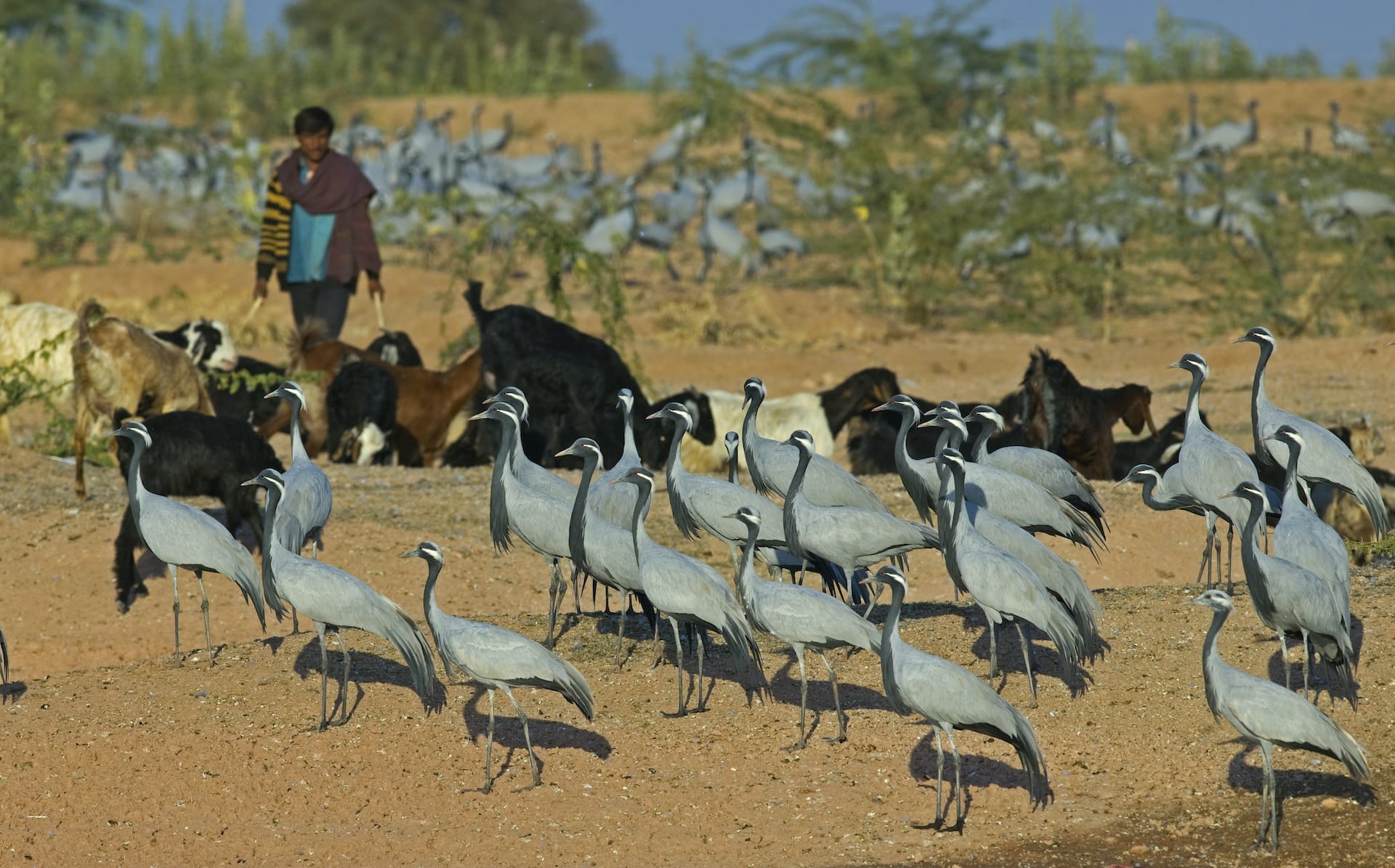 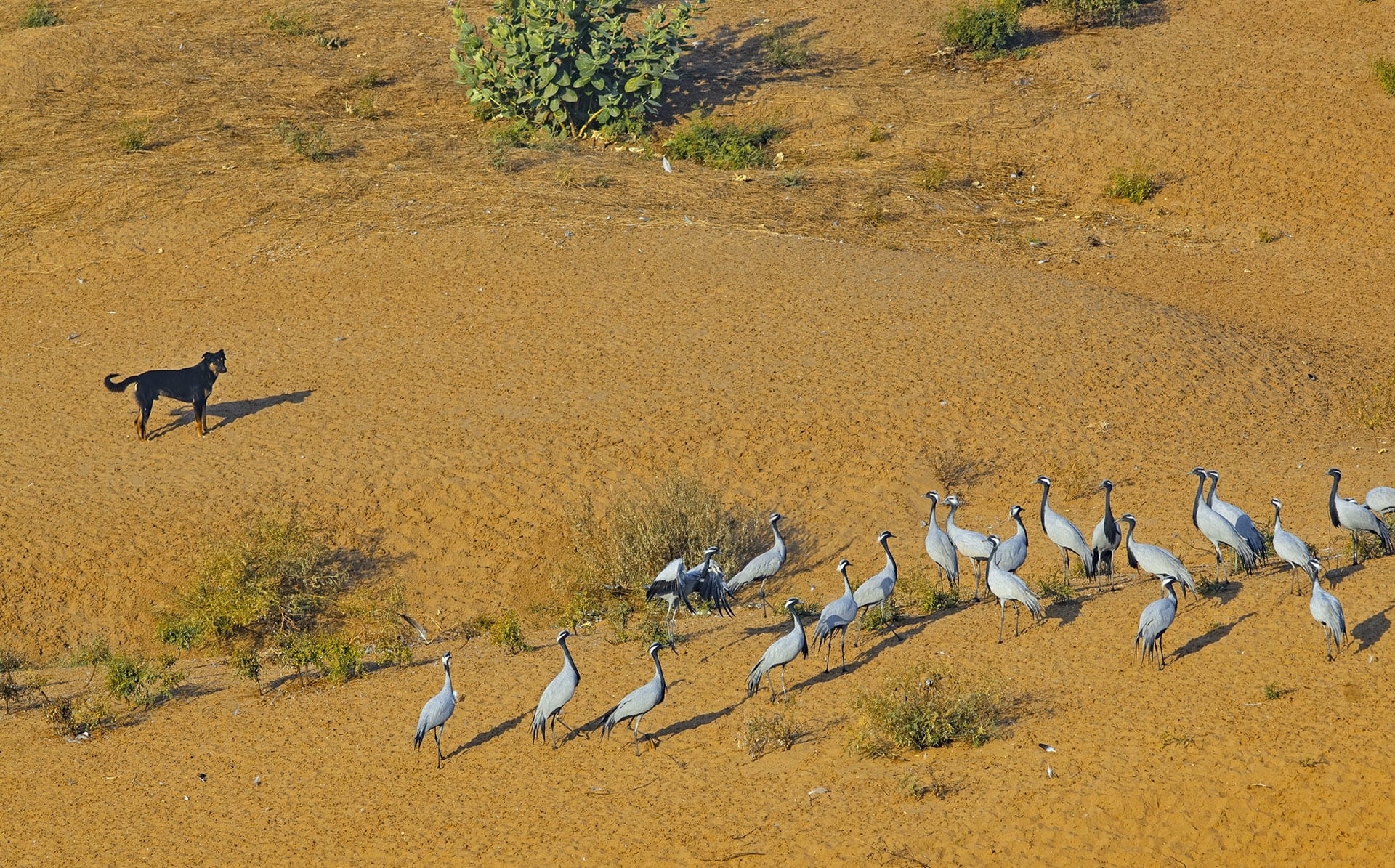 In Kheechan, the cranes are comfortable with human presence and can be seen around herds of grazing livestock such as goats. Mukherjee says this is not the case in the Rann of Kutch, where the birds are shy and tend to fly away at the sight of humans — a testament to how safe they feel here. However, lately, free-ranging dogs have become a menace to these cranes, chasing and terrifying them. 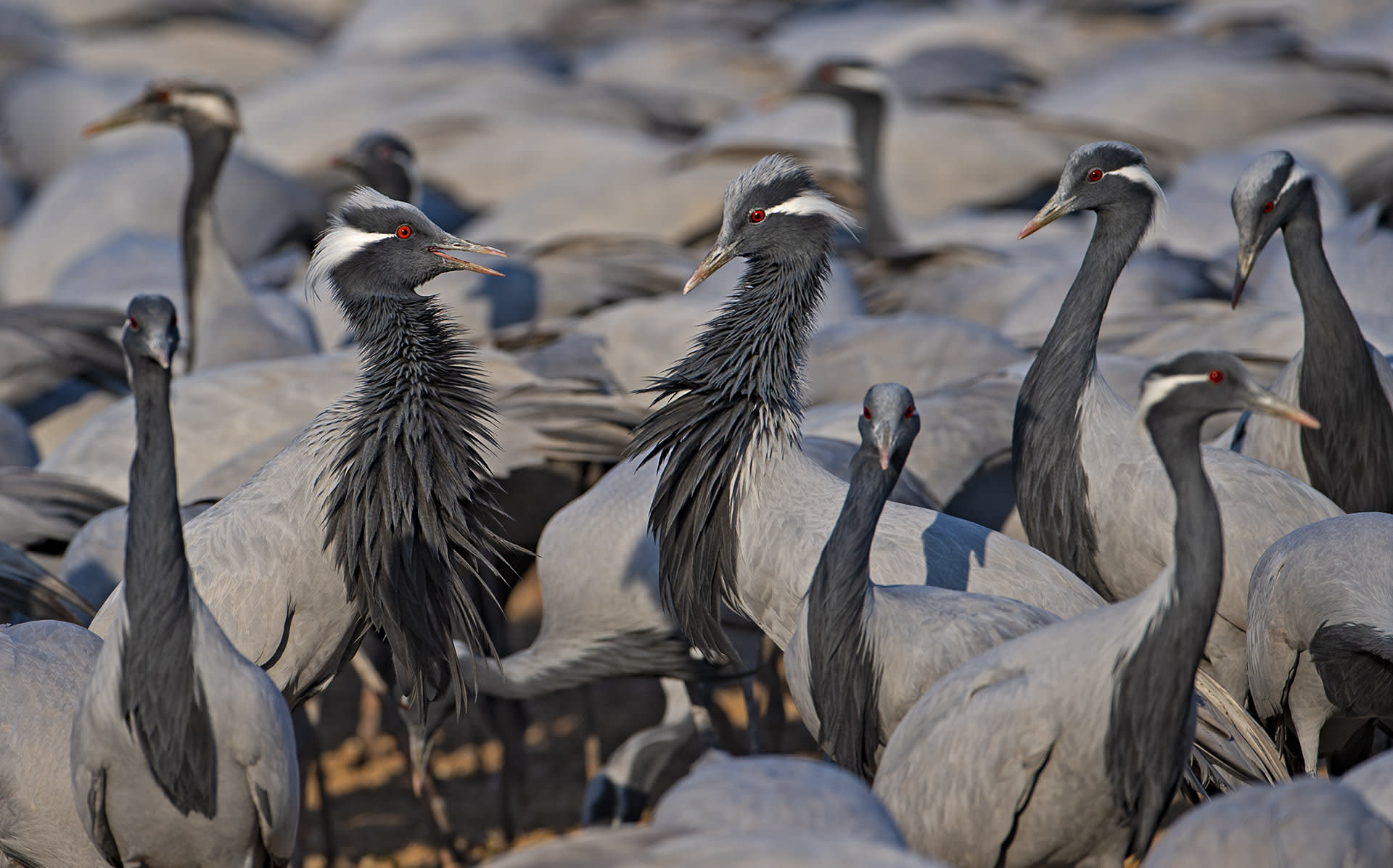 This not to say that the birds are entirely safe. In past years, several cranes have died due to electrocution from powerlines around Kheechan, but the poles have been moved underground thanks to efforts by residents. On the flip side, farmers in the region have to deal with flocks foraging in their fields, though this is relatively less a problem because of the grain they get at the birdhouse.

What makes Kheechan so special is the involvement of the community in the conservation of this species. Despite living in an arid part of the world where water is such a precious commodity, residents are willing to share their talao with these birds. “In fact, several ponds and wells are exclusively devoted to these revered ‘guests’ who are looked after by both rich and poor,” notes the book, Faunal Heritage of Rajasthan, India, edited by BK Sharma, Seema Kulshrestha, and Asad R Rahmani. 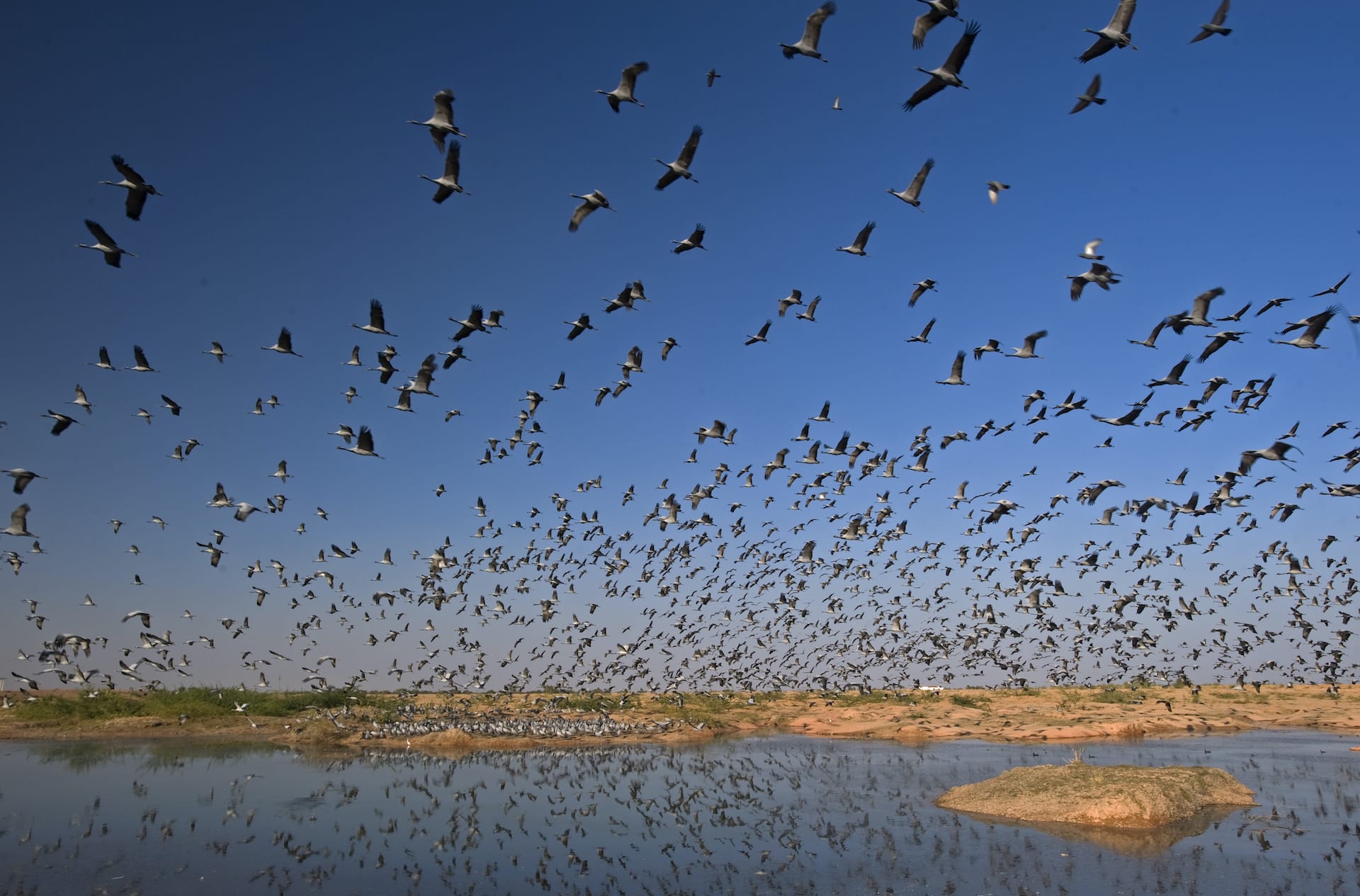 Visitors to Kheechan can do their part too. They can ensure any garbage they bring along is disposed of responsibly, maintain a respectable distance from the birds while taking photographs, and patronise guides and operators that put the safety of the species first. Finally, we too can take a page out of Khichan’s story and consider the simple act of putting out bowls of water for birds in the summer which help make their lives easier.