Though their numbers have improved significantly, conservationists are still concerned for the survival of India’s khurs 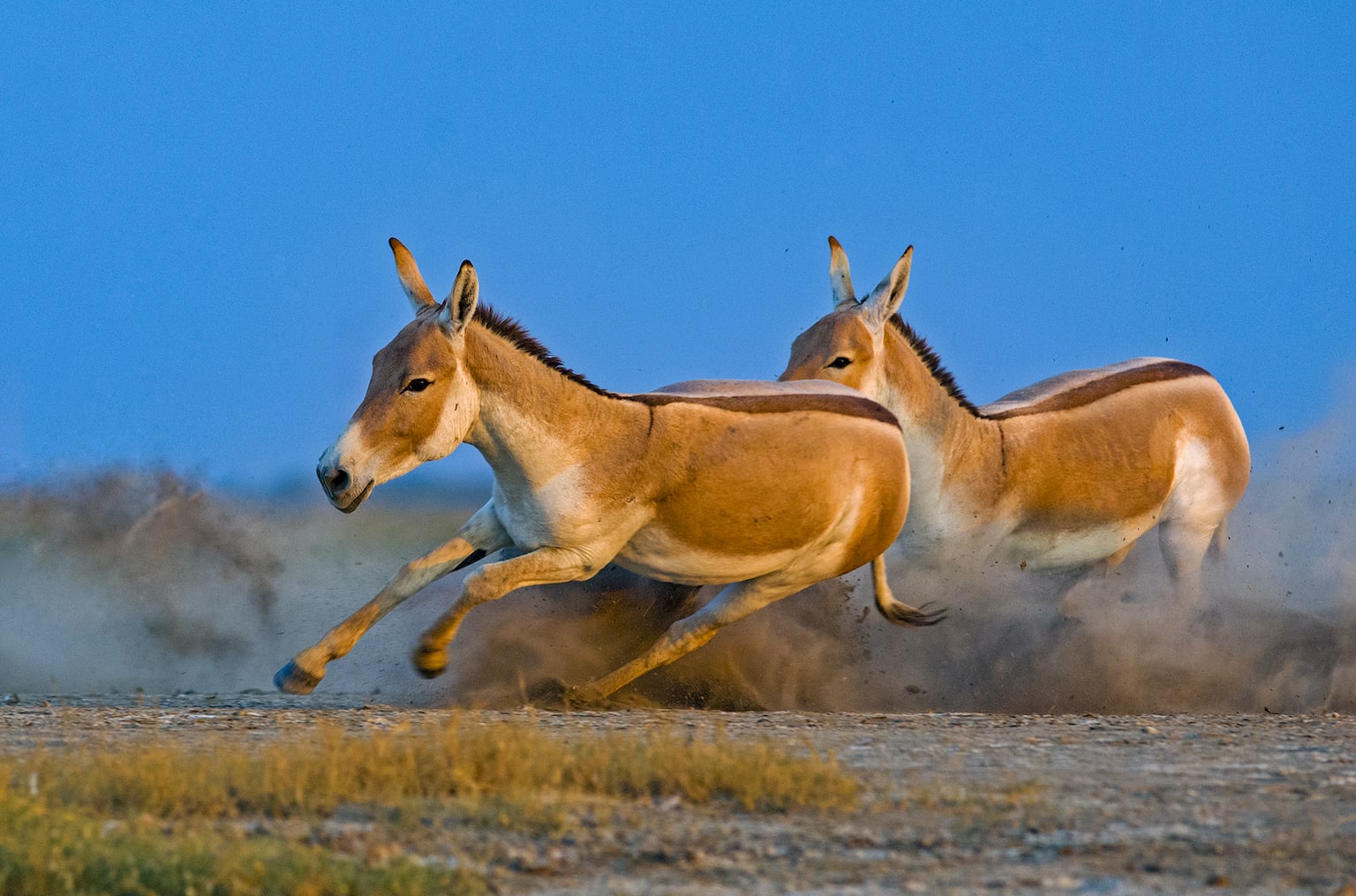 The equine family includes horses, donkeys as well as zebras and wild asses. Zebras are found only in Africa, but wild asses have a much larger range. The Asiatic wild ass (Equus hemionus), also called the onager, has five subspecies, of which the khur (Equus hemionus khur), or ghorkhad as it is called in Gujarat, is one.

According to a studbook (register of animal pedigrees) prepared by the Wildlife Institute of India and Central Zoo Authority, the khur was “once widely distributed across the arid region of northwest India (including present day Pakistan) and westwards through much of central Asia towards Syria.” Today, the species is found largely in the Little Rann of Kutch in Gujarat, in a protected area called the Wild Ass Sanctuary.

Spread over roughly 5,000 sq km, this protected area has an exceptional landscape — it is both saline desert and seasonal wetland. During the parched summer months, the Little Rann is vast, desiccated, and dotted with scrubby patches of vegetation, but with the monsoon, the region is inundated with water, attracting a bevy of migratory waterbirds that congregate here in awesome numbers. The UNESCO World Heritage document calls the Rann “one of the most remarkable and unique landscapes of its kind in the entire world.”

The khur is a full-time resident of the Little Rann and can be seen galloping across the flatlands in herds, often at speeds of up to 70 kmph. These swift, elegant mammals were once critically endangered, with global numbers down to 700 in the 1970s. But thanks to concerted conservation efforts, things have changed significantly, and rather surprisingly.

“This year’s census recorded around 6,000 khur,” reports Abhijeet Dutta in a Mongabay article from October 2020, “indicating a 30% increase in its population in the past five years.” Normally, this surge in population would be a cause for celebration in conservation circles, but in the absence of wildlife corridors for the animals to disperse, this has increased instances of conflict with humans, and disease due to the proximity with livestock in human-dominated areas. 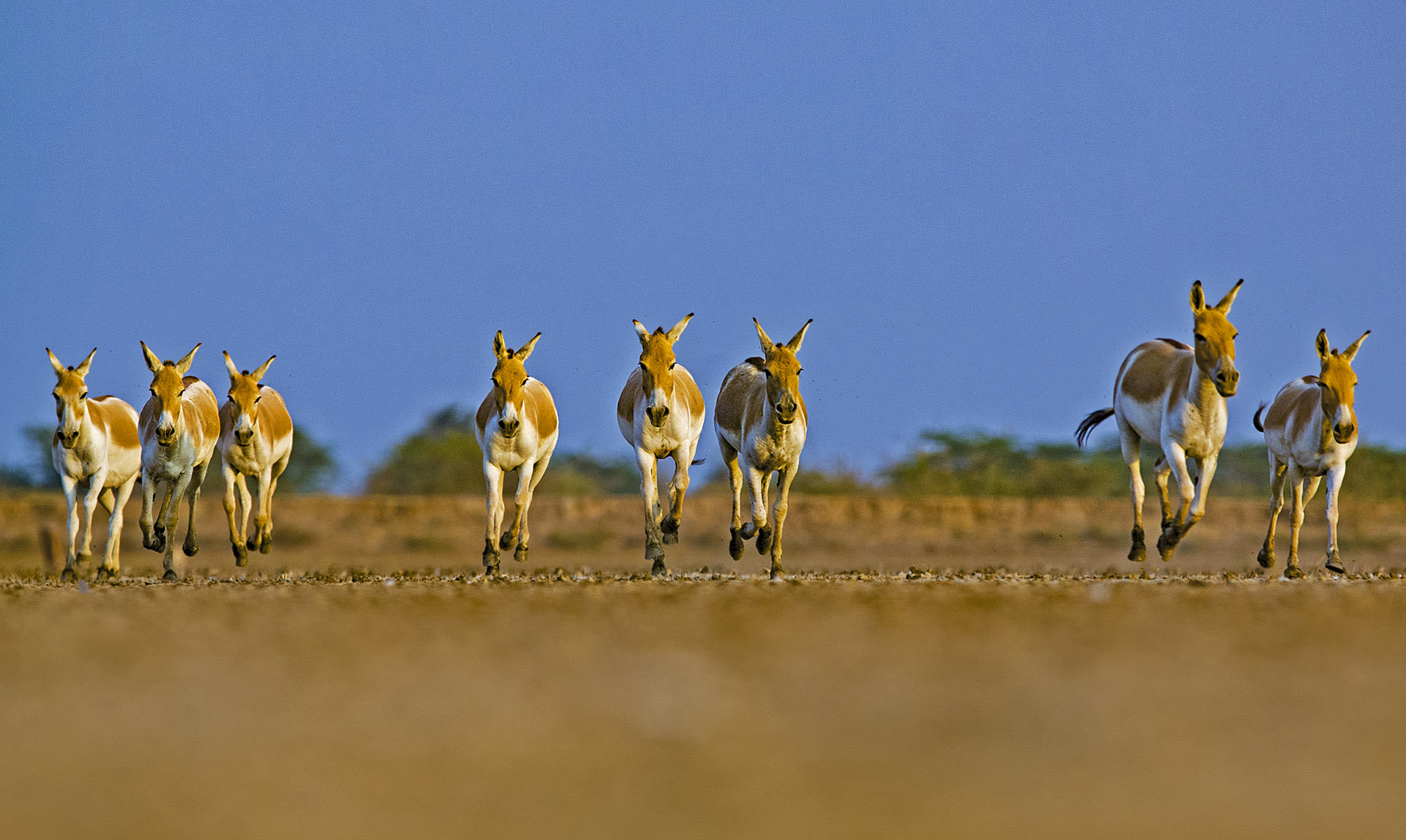 The khur population is largely confined to the fringes of the salt encrusted desert with small numbers distributed on various islands or bets, write Nita Shah and Qamar Qureshi in a paper on the social organisation of khurs in the Little Rann. “Bets” are raised pieces of land in the Little Rann that become like islands surrounded by water in the monsoon. Bets often have a higher degree of vegetation compared to the surrounding areas and are a source of nutrition to these herbivores.

Khurs are generalist herbivores, i.e., they consume a wide variety of plants for their nutrition. “When grass is plentiful, Asiatic wild asses are predominately grazers,” according to the IUCN. During the dry season and in drier habitats, they supplement their diet with shrubs and switch to become mixed feeders.

Studies report groups of khur visiting agricultural fields on the fringes of the sanctuary, where crops such as pearl millet, cotton, castor, sesame, groundnut, and wheat are grown. “In winters, less time is spent in feeding during the day, as they raid agricultural fields by night,” mentions the studbook. Adding that despite being largely diurnal, “Wild asses in the Little Rann of Kutch are active during the night. This is to maximise resource utilisation at the natural vegetation-agriculture interface.” 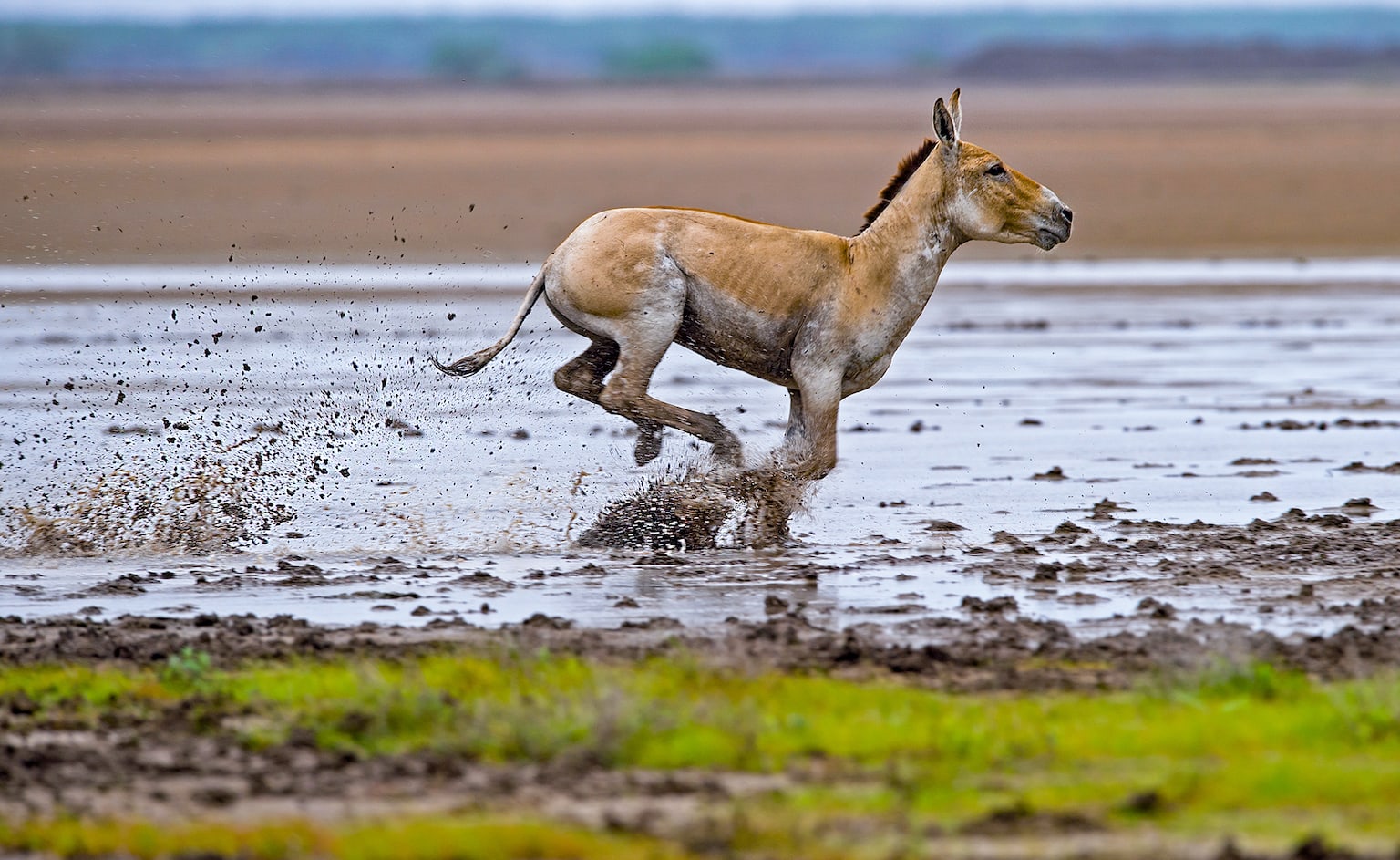 Khurs are social animals that gather in groups. Nita Shah’s study mentions four predominant social units among the species: family groups comprising of adult females and their offspring; all-male groups comprising young males that have been displaced from their natal group; dominant stallions with established rank and territory; and stallions that have been displaced from their territory and are seeking new areas. Family and all-male groups are fluid and of variable group sizes due to fission and fusion, writes Shah, pointing to the fact that groups may band together or diffuse due to factors such as availability of resources and time of year.

Family units have the largest home range — defined as the area within which animals live and forage. The dominant stallions have the richest lands, with water and rich food resources. Less productive areas are occupied by young and displaced stallions. “The territorial stallion defends water sources, productive grassland and scrubland,” writes Shah. So, mares from family units may become part of territorial harems, to ensure they have access to areas that are high in resources. “In summer, which is a resource-poor and nonbreeding season,” she writes, “family groups and dominant stallions have shown 80% overlap” in home range, but the overlaps reduce significantly during the months following the monsoon when vegetation is at its most plentiful.

Breeding season is a time of dominance display. “Territorial stallions soiled themselves with mud/slush during the breeding period, which could be a visual display,” writes Shah, adding that, “The stallion probably uses olfactory and visual markings like defecation and micturition [urinating] on territory borders and other parts of its territory. Fights between stallions are not uncommon at this time of year. Most of the time, Shah writes, the territory-holder is the winner, which results in the displaced stallion occupying part of its former range or wandering around for a new area to occupy.

Like with most animals, khurs breed when food is plentiful in their habitat. “Breeding is a seasonal activity occurring predominantly during monsoon,” reports the studbook. It goes on to say that males protect territories based on their dominance hierarchy, “so males higher up in the hierarchy tend to have better habitat conditions in their territories while subordinate males are relegated to inferior territories.” Females move between territories at this time of year, choosing to mate with males having the best territory.

The healthier the habitat, the higher the chances of successful birthing. Shah reports that “The year following good rainfall and high productivity recorded higher foal-to-female ratio.” Khurs have a relatively long gestation period of eleven months, with births peaking between April and September. 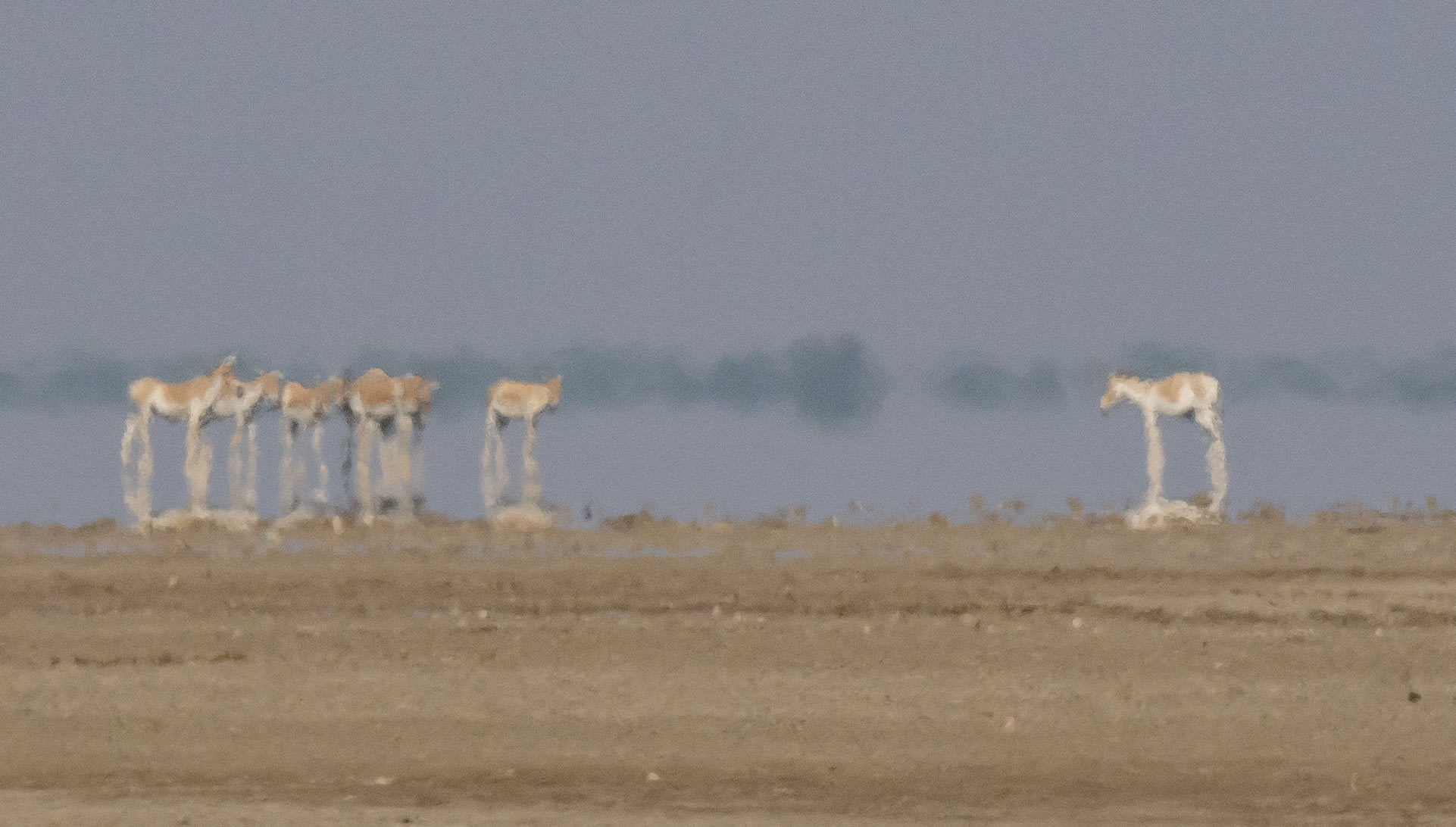 Shah writes that dry land farming, salt works, and seasonal fishing are the main occupations of people of the region, but the increase in human population has upped the resource requirement, leading to the big changes in the habitat. Some regions in the Little Rann are now irrigated for agriculture, vehicular movement and digging is increasing due to salt mining, and pesticide runoff from farmlands are finding their way to the protected area. All these factors are altering the nature of the landscape, influencing the flora it supports, and the species that inhabit the space. 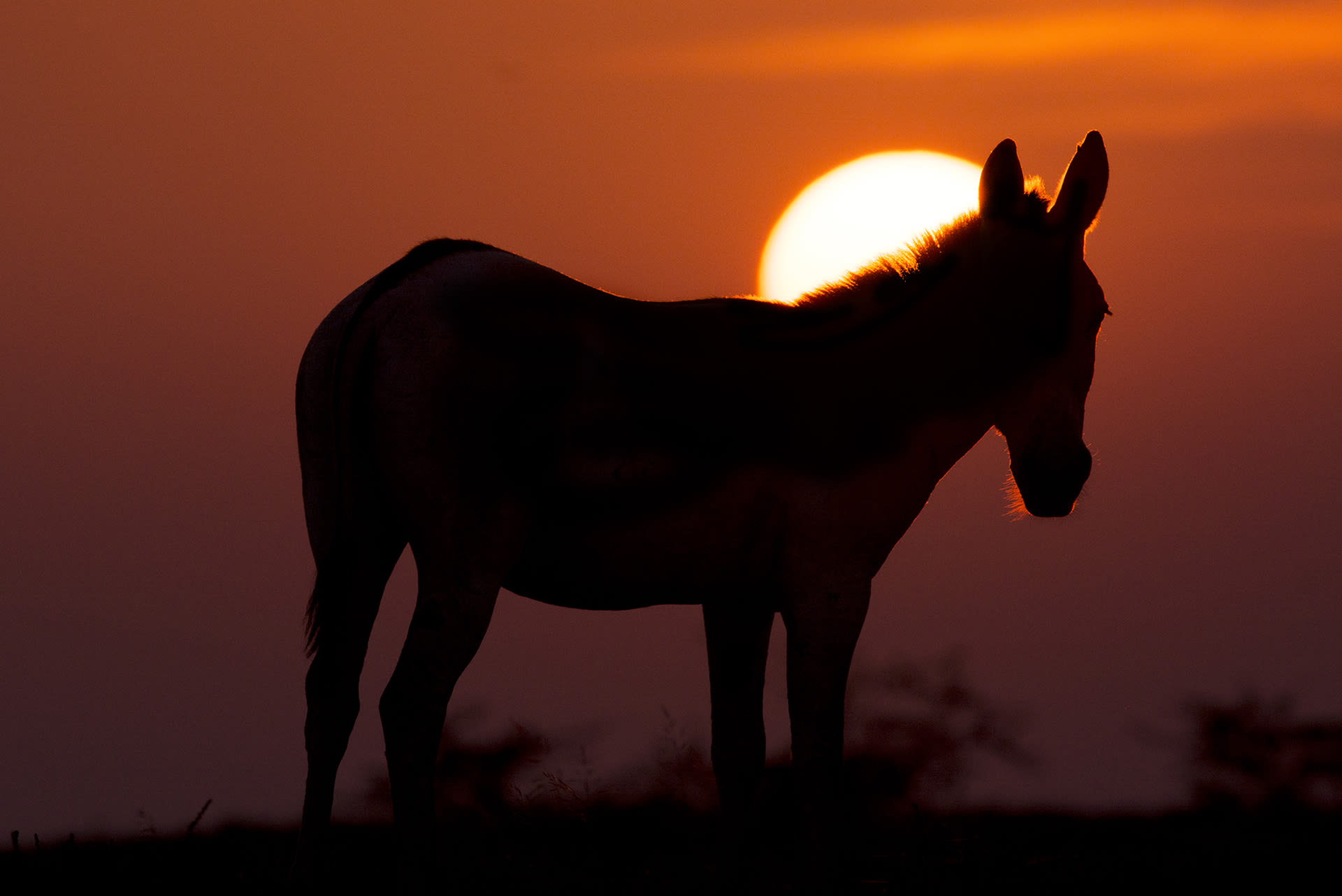 In addition to these “developmental activities”, the khur is also vulnerable to disease from domestic livestock, as there is now an overlap of grazing grounds. Without adequate space to roam and wildlife corridors to disperse, the khur remains vulnerable to these threats, even with numbers on the rise. As of now, the Wild Ass Sanctuary is the only wild habitat of the khur, the only part of our planet where herds of these lesser-known equines still run free.