When the sun sets along Great Nicobar’s Galathea coast, the world’s largest turtle emerges from the waters to build a nest on its silver shore 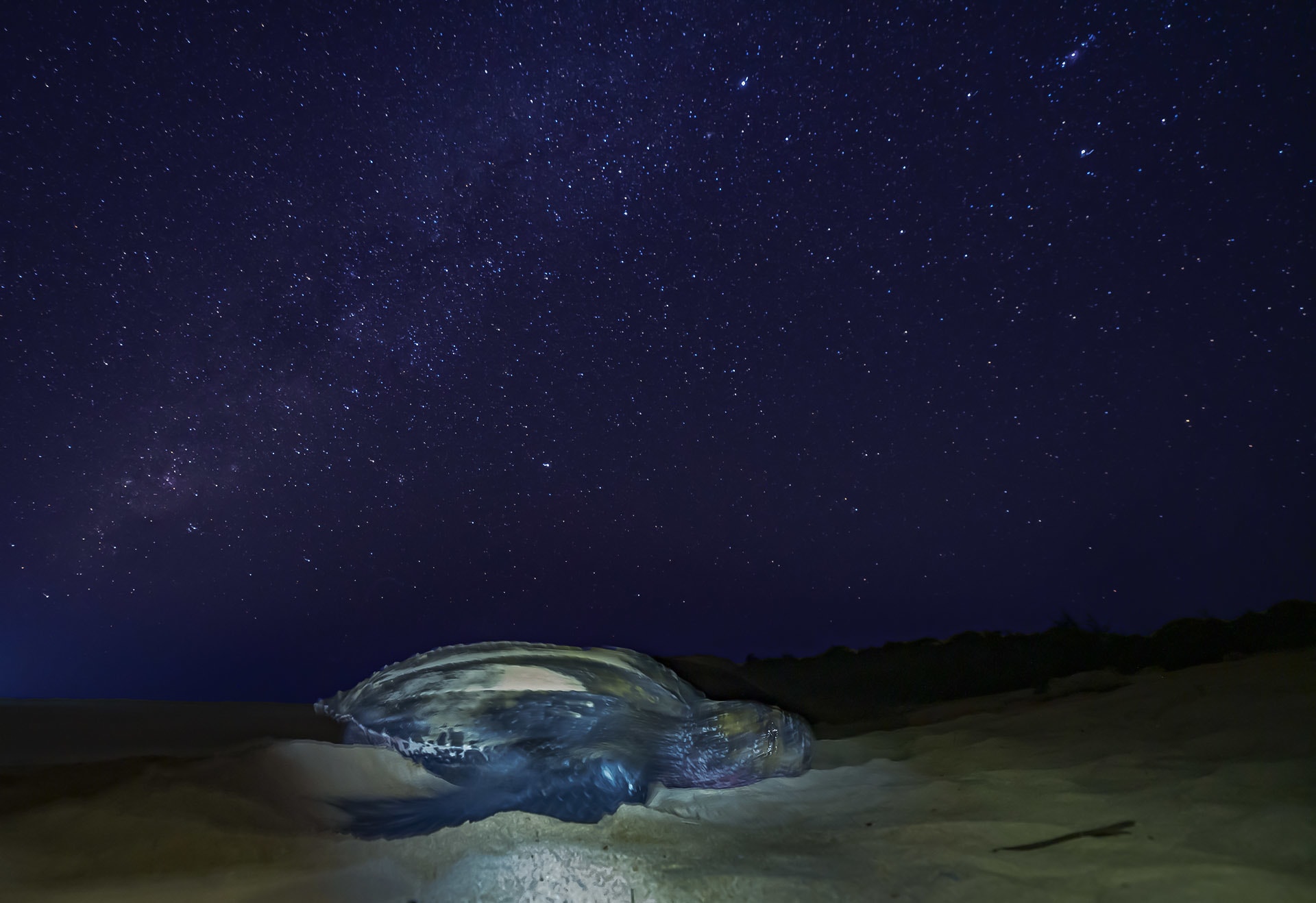 “Lights off!” bellows wildlife photographer Dhritiman Mukherjee, as I watch his silhouette approach the waves in the dark. It is close to midnight. Above, the Milky Way stretches like a star-studded ribbon across the velveteen sky. Below, swarms of sand flies bite, leaving behind pustules that sting for weeks. Mukherjee, a crew of filmmakers and I are on the Galathea shore, a coast on the last island of the Andaman and Nicobar archipelago, where the forest department camps watch over leatherback turtles that emerge to nest. It has taken us a flight, a two-day journey on a cargo ship, a drive, a boat-ride, a hike and several permits to get here. We’ve left electricity, and civilisation, far behind. I switch the flashlight of my budget phone off, and in the blackest night, we wait.

The leatherback (Dermochelys coriacea), the world’s largest sea turtle, is a nocturnal nester. It spends its life at sea, but females travel over 10,000 kms from foraging grounds to nest on preferably undisturbed shores. Galathea Bay Wildlife Sanctuary, that stretches along the southern coast of Great Nicobar Island, is the largest nesting site in the country and the Northern Indian Ocean. An ongoing tagging project by Dakshin Foundation has recorded leatherbacks travelling over 13,000 kms from Mozambique and the Madagascar coast to nest here. But even after such an arduous journey, females can abort their plan just at the sight of a flashlight. They may look for another beach nearby to nest on, or return to same one a few nights later.

Mukherjee continues to stare at the waters. Minutes later, where waves break into pillowy surfs, a black bump bobs over the surface. Starlight bounces off her carapace, revealing neat ridges studded with white speckles. When she finally heaves her hulking body out of the waters, I gasp. A leatherback can grow up to seven feet long and weigh up to 700 kgs, all on a diet of mostly watery, translucent jellyfish. We retreat to the shadows to give her space.

The leatherback is not charming at first glance. She has an egg-shaped head, dented at odd angles. Her peculiar mouth has a ridge that makes it look like there is a fang sticking up from the centre of her lip. In the waters, she dives deeper than any turtle, as her wing-like front flippers cut through ocean currents. But now, she awkwardly slaps them together and drags her body forward, as if she is attempting a butterfly stroke on land. After 20 long minutes she covers a few feet. “It’s going to be a long night,” warns Mukherjee. 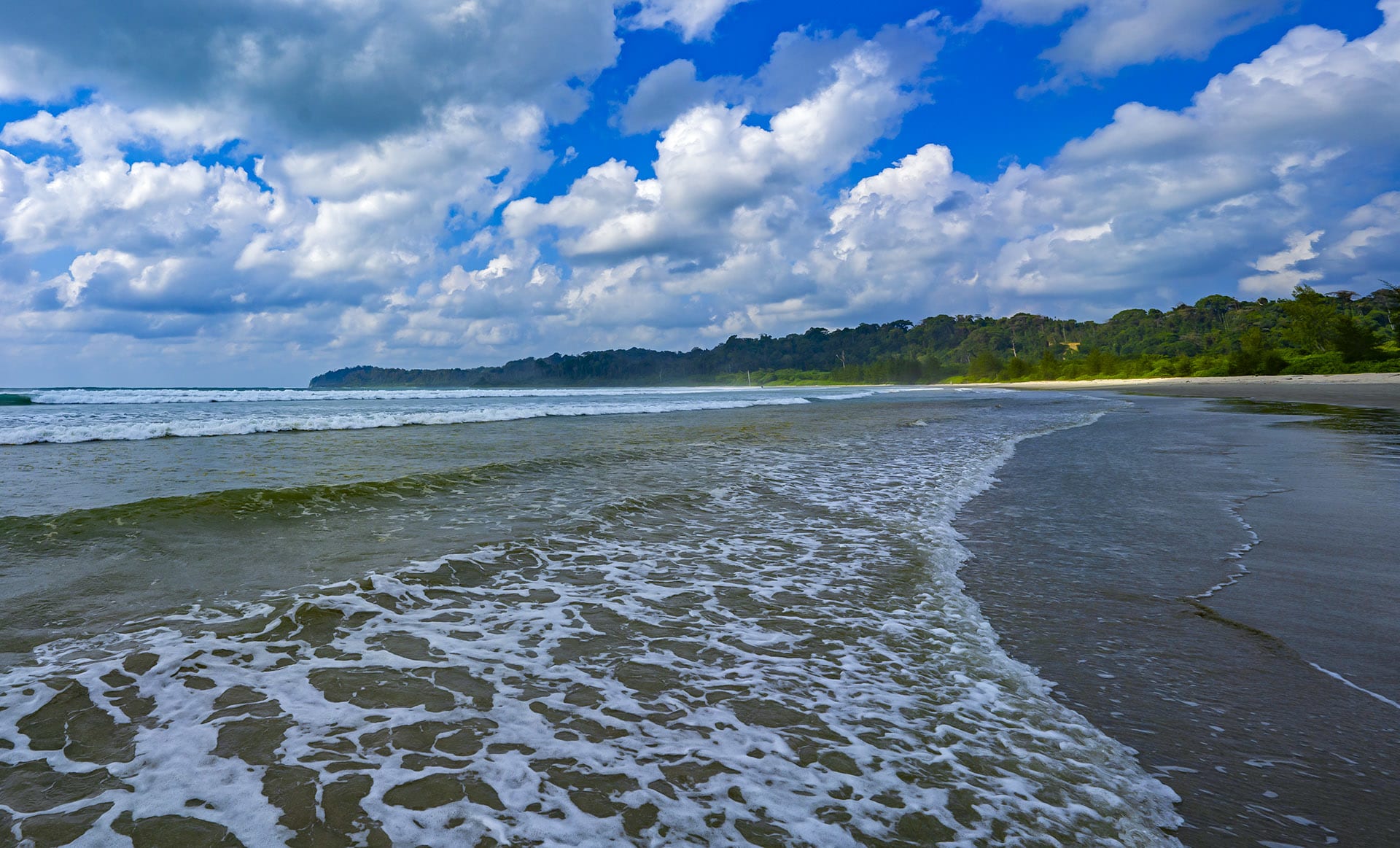 Leatherbacks are particular about the beaches they nest on and the Galathea Bay is ideal for many reasons. Like all turtles, they prefer undisturbed beaches with little or no light pollution. Eighty per cent of Great Nicobar island is a reserved forest. A dense tropical rainforest hugs the shore, creating a green veil that provides extra cover. A leatherback’s “shell” is not a shell but soft, leathery skin stretched over its back. A rocky beach can damage its delicate carapace. Galathea Bay, where the Galathea River meets the sea, produces a stretch of rock-free bay with an clear access to the shore, just the right incline, and soft silver sands.

Once she reaches dry ground, she picks a spot, starts digging. All four flippers sweep and slap, while her body twists and turn, digging an enormous “body pit”. A “body pit” helps her reach wet sand below, so when she digs a nest it’s far beneath the surface. Now the action moves to the back. Her hind flippers work like shovels, creating a pear-shaped nest. Once her flippers no longer reach the bottom, she goes into a trance-like state. Her body begins to heave and with every pulse she drops a couple of slimy, billiard ball-sized eggs into the chamber. On an average it lays between 100-110 eggs in a nest. 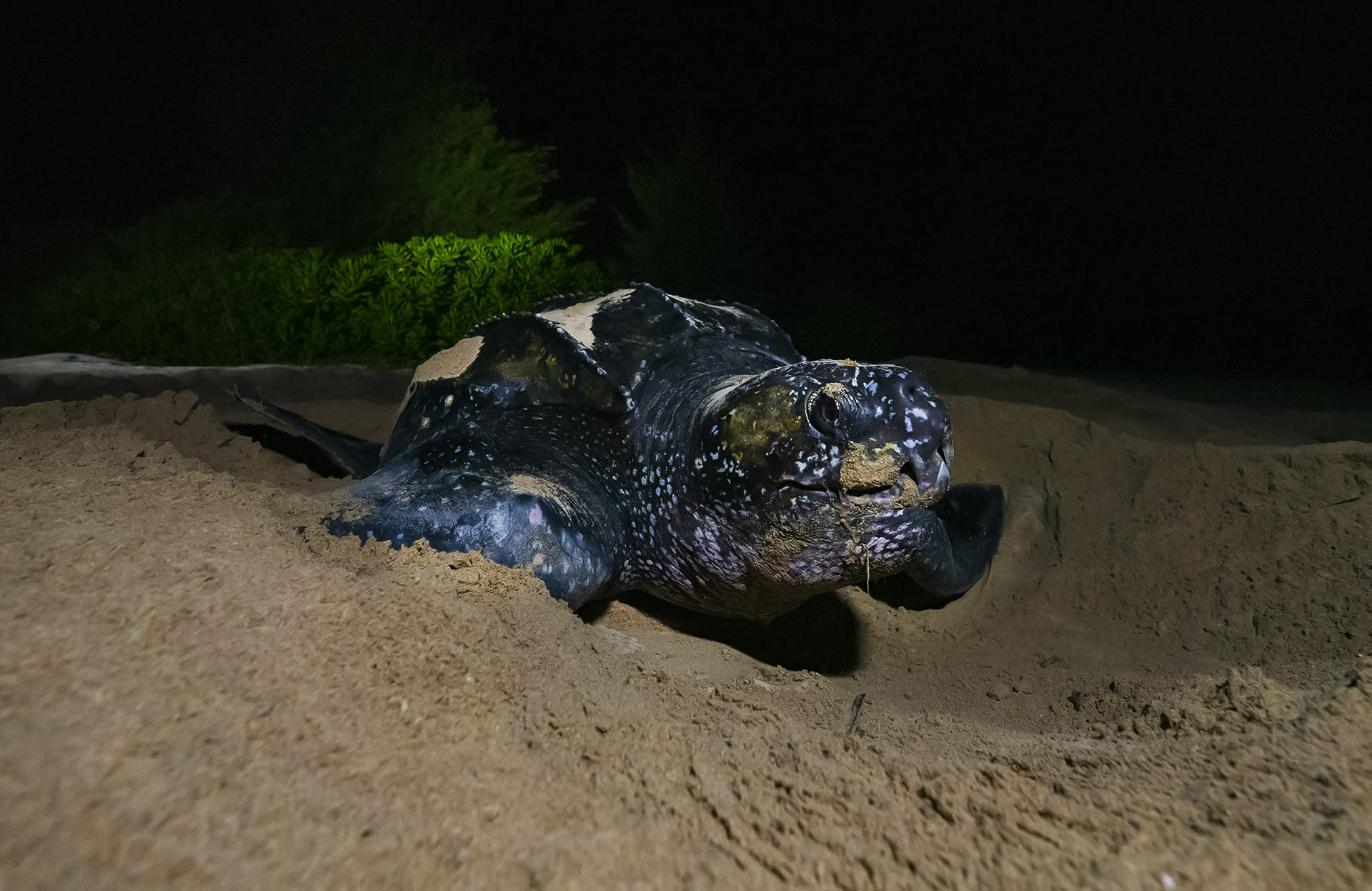 Soon her heaving gets louder. Streams of gelatinous “tears” run from her glassy eyes, creating sticky pools in the sand. Adhith Swaminathan, senior researcher with Dakshin Foundation, who has been working on leatherback turtles for over ten years, reminds me that they are not tears. “Turtles have glands located in the corner of their eyes to release excess salt in the body,” he tells me later, on the phone. I spot cuts on her neck and under her hind flipper that have now begun to bleed. A large number of sea turtles are seen with propeller cuts from ships or nets. It is hard to tell if these cuts too are from ships or natural causes, but the nesting process puts the body under enough stress so existing cuts bleed.

While she is in a trance, a nest a few feet away starts bubbling like a sand volcano, and 50-odd hatchlings scamper out, wildly flapping their flippers, and heading towards the sea. It’s a testament of how rich and robust this site is. Of the 1,000-odd nests that are recorded on the archipelago, these shores alone see over 400. “These eggs must have been laid two months ago,” says Mukherjee. “The amazing part is that just when they are leaving, we often see another set of eggs hatching right next to it — we can witness the entire circle of life in that one instant.” The female leatherback, however remains unperturbed by our excitement. 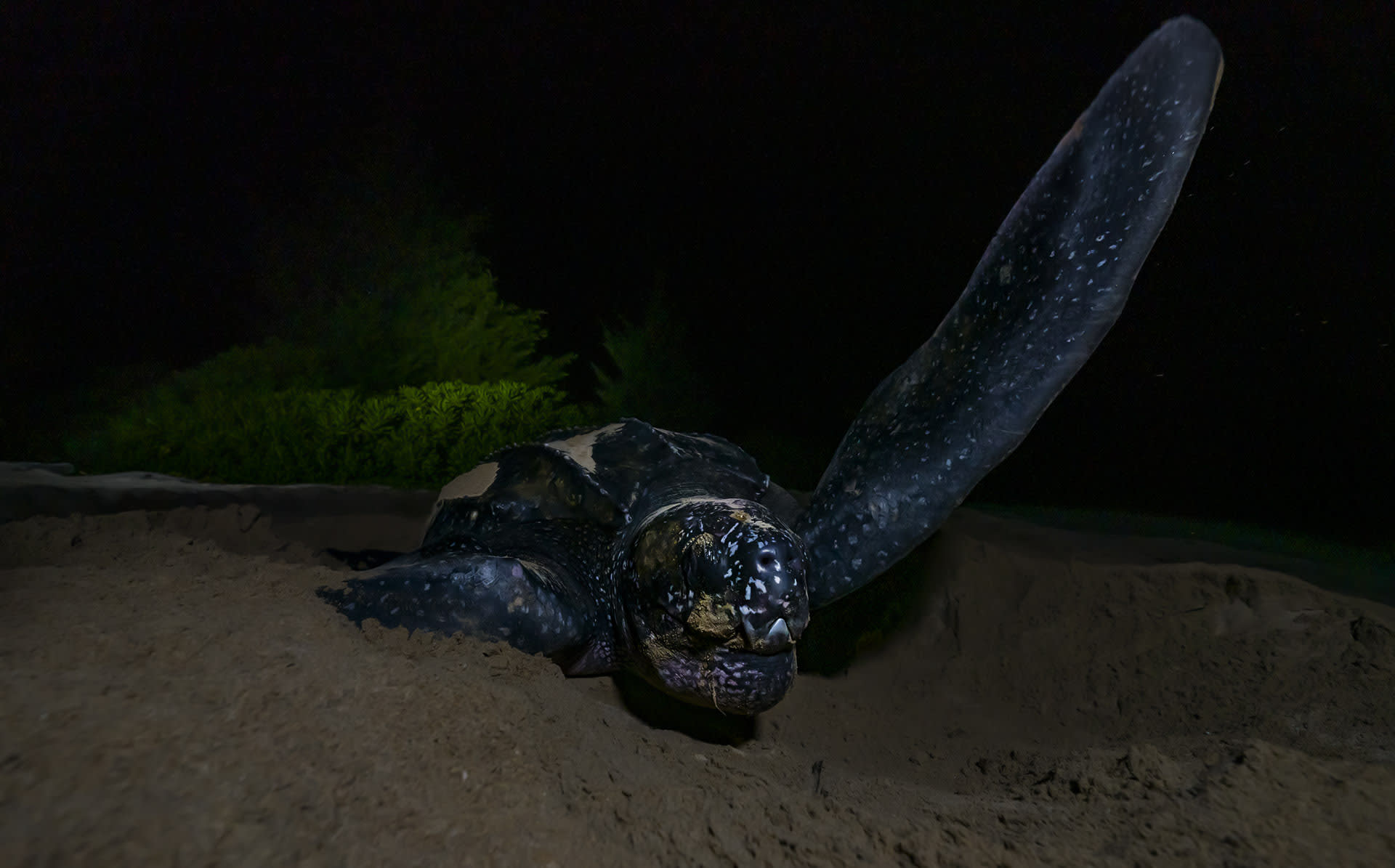 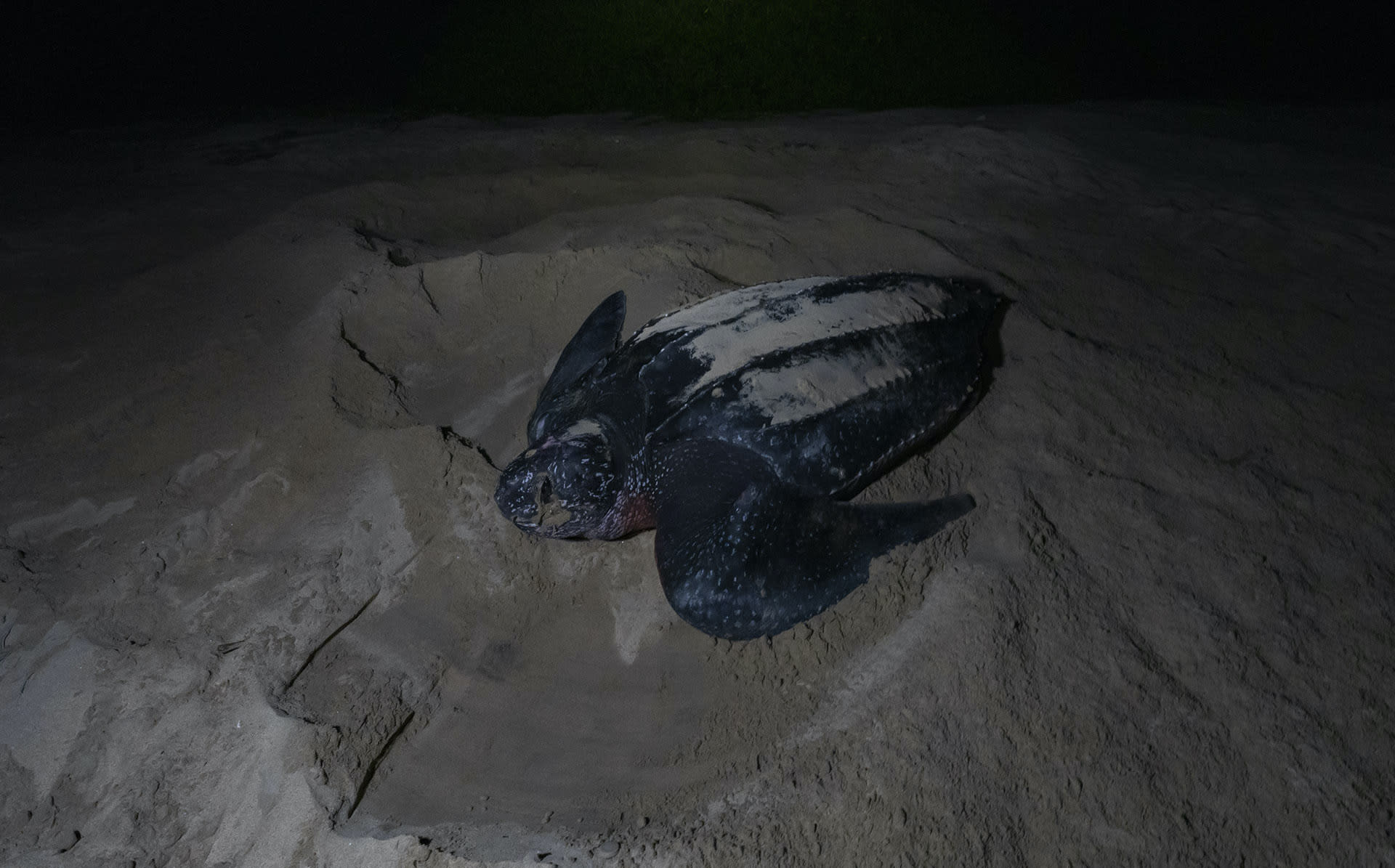 Once eggs are laid, she covers them with sand. By the end of it, she looks spent. For a moment, her body lies still. And then, as if someone flipped a switch, she starts slapping her flippers left and right, twists, changes direction, turns in circles, creating odd map-like shapes in the sand. We are at Act Two. She spends an hour concealing the location and displacing sand for metres around it. Camouflaging the location of the nest is of crucial importance. The leatherback’s nest has several predators. Monitor lizards and feral pigs are known to sniff them out. 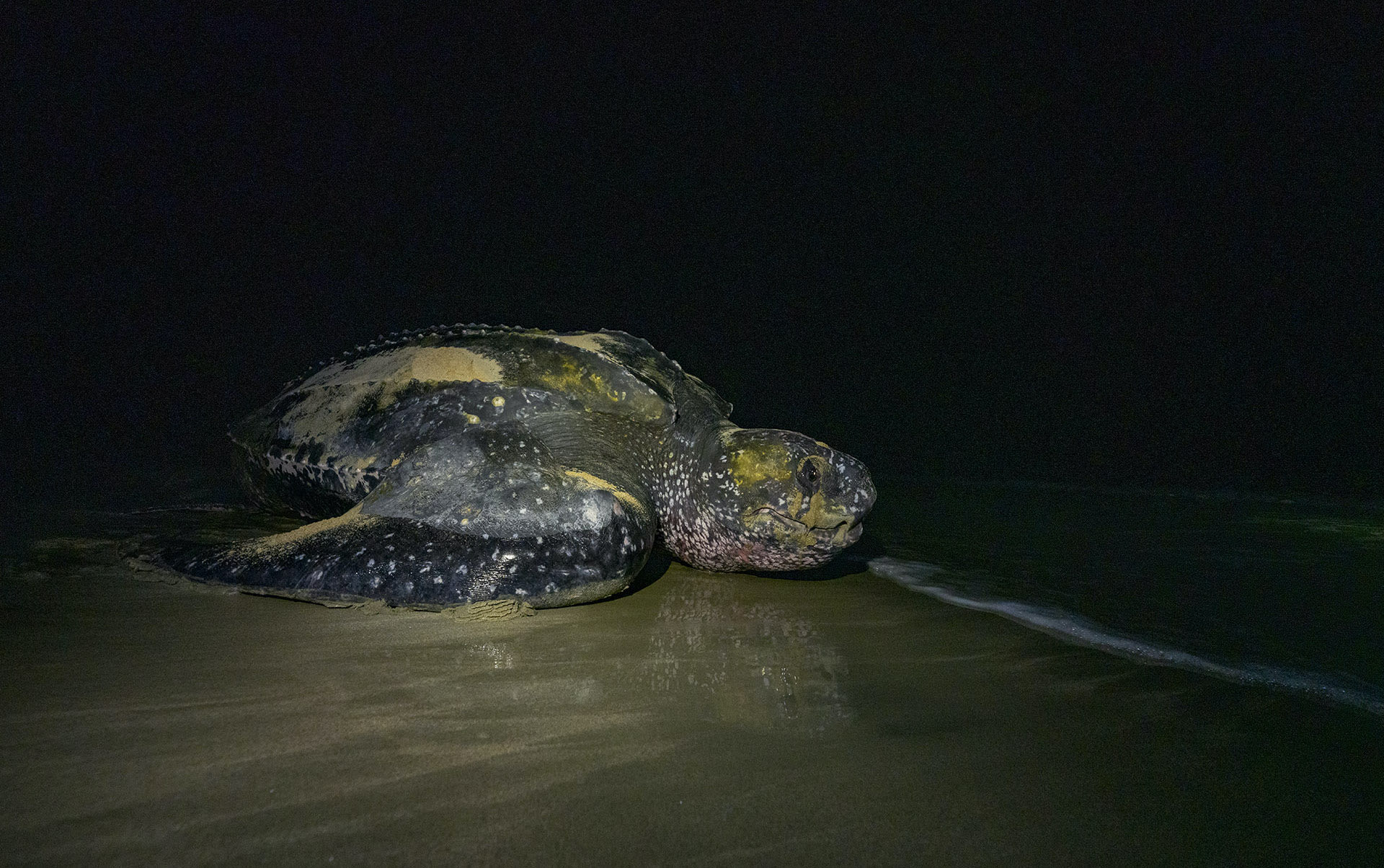 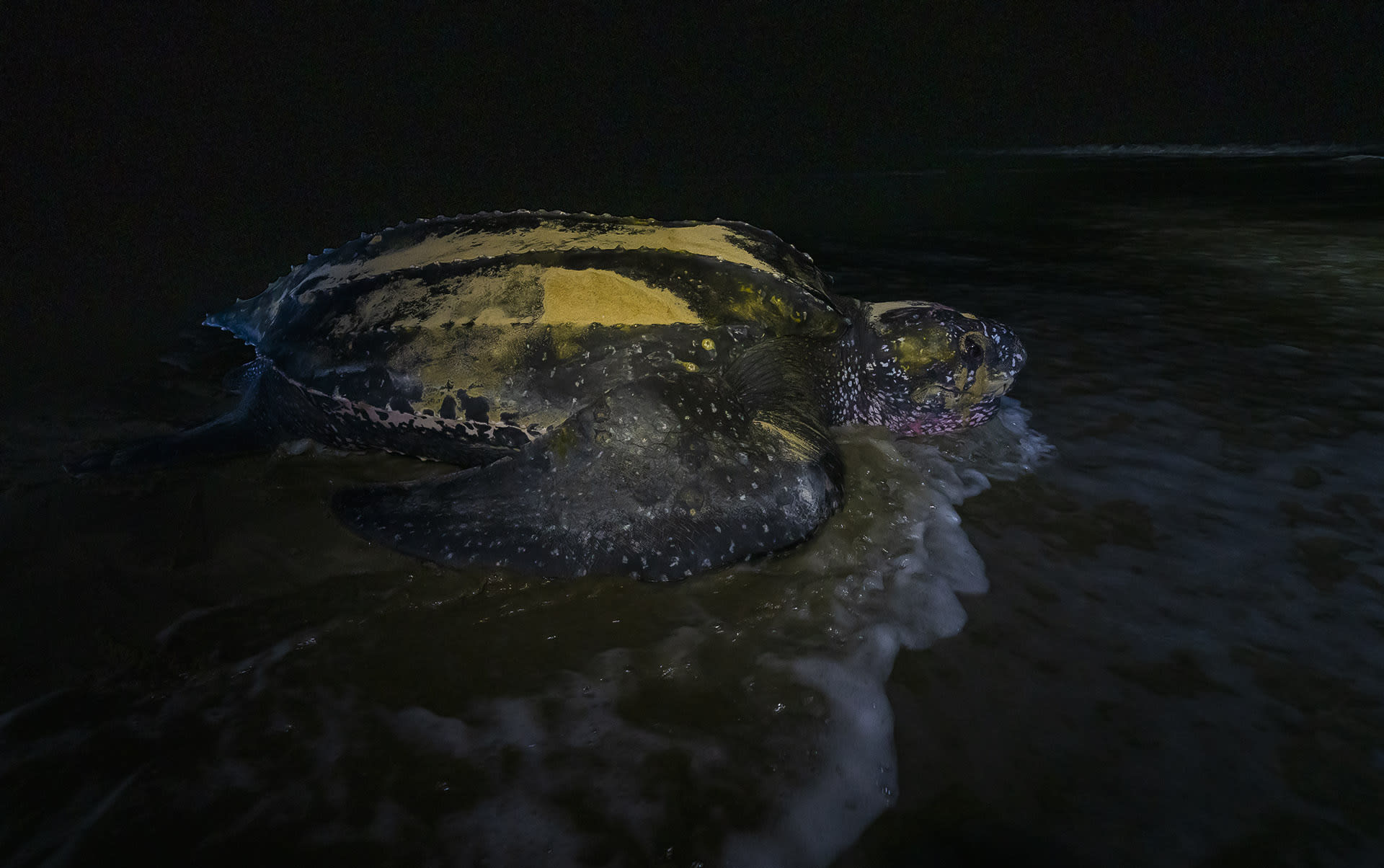 Once the nest is camouflaged, with sand on her back, she leaves for the ocean. It’s been three of hours of intense labour, and I am relieved to see her go. She will never see her nest or hatchlings again, but may return to the shore this season to build another nest. A leatherback breeds once every two or three years, and may nest six to eight times every season on the same beach, or in the same region. Some years later, the mother will return to the same region for another nesting season.

While the leatherback does do everything she can to safeguard her eggs, it’s still not fully safe from predators. To make sure as many as possible survive, workers from the forest department collect the eggs and relocate them to a hatchery. While Pralay Biswas, part-time worker with the department, gently uncovers the nest, I notice that the first layer is made of marble-sized balls. Beneath them, are larger eggs. Swaminathan says there are few theories. “One, by covering her eggs with tinier gobs, she is making sure that the “real” eggs at the bottom get an additional layer of protection from predation. Two, the smaller gobs, create gaps, ensuring circulation of gases that help with incubation,” he says.

Every morning, as we walk down the shore, we chance upon a hatching. The hatchlings, smaller than my palm, develop over two months. Some may hatch early, and choose to wait a couple of days, for the rest. “Emerging from a tightly packed nest that is about a metre deep isn’t easy. Once a significant number is out, they work together like a team to push through the sand column and break the ceiling,” says Swaminathan. But more importantly, there is strength in numbers. Predators lurk around the corner to lap up a quick meal, a large group means that at least a good number make it to sea. 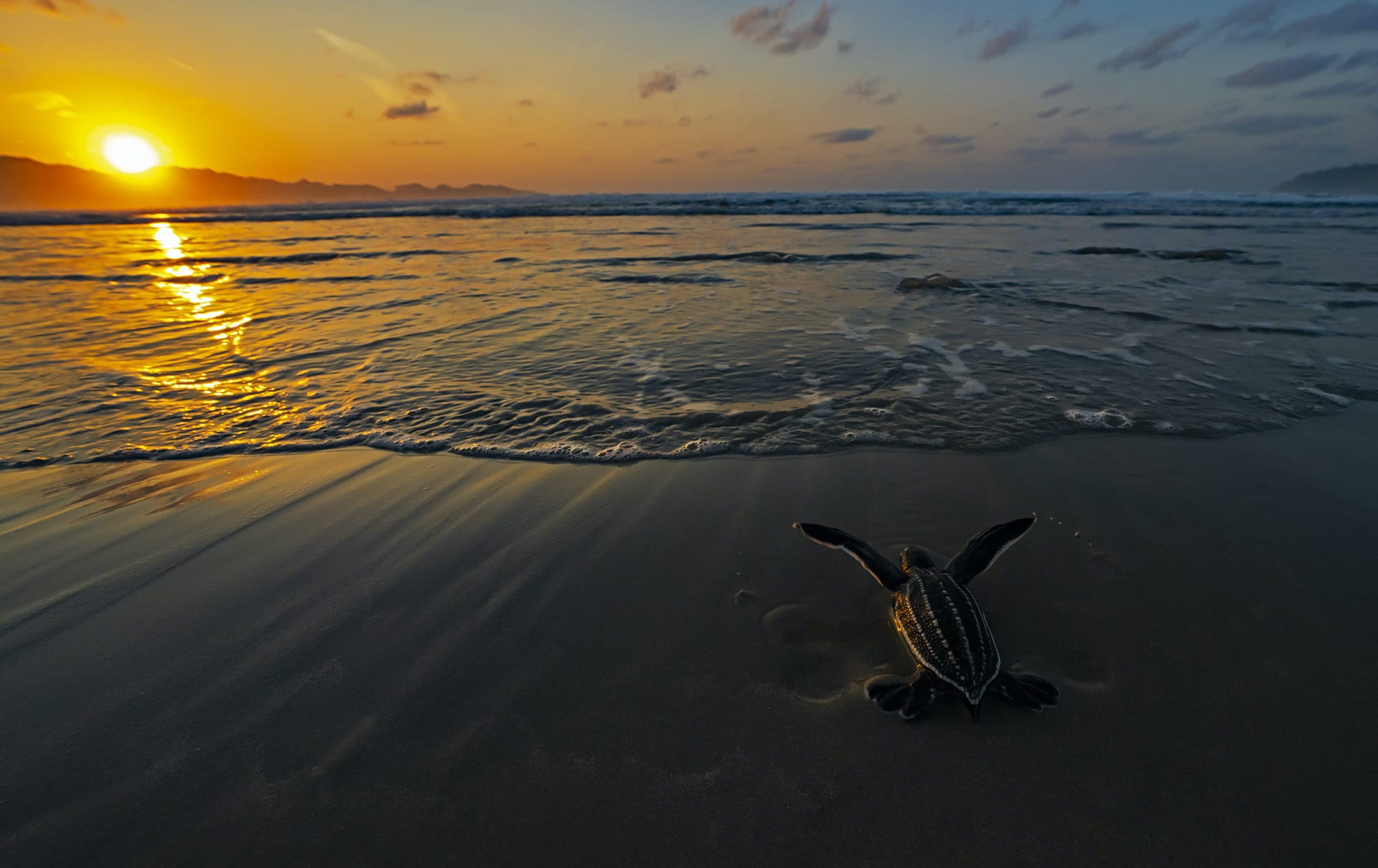 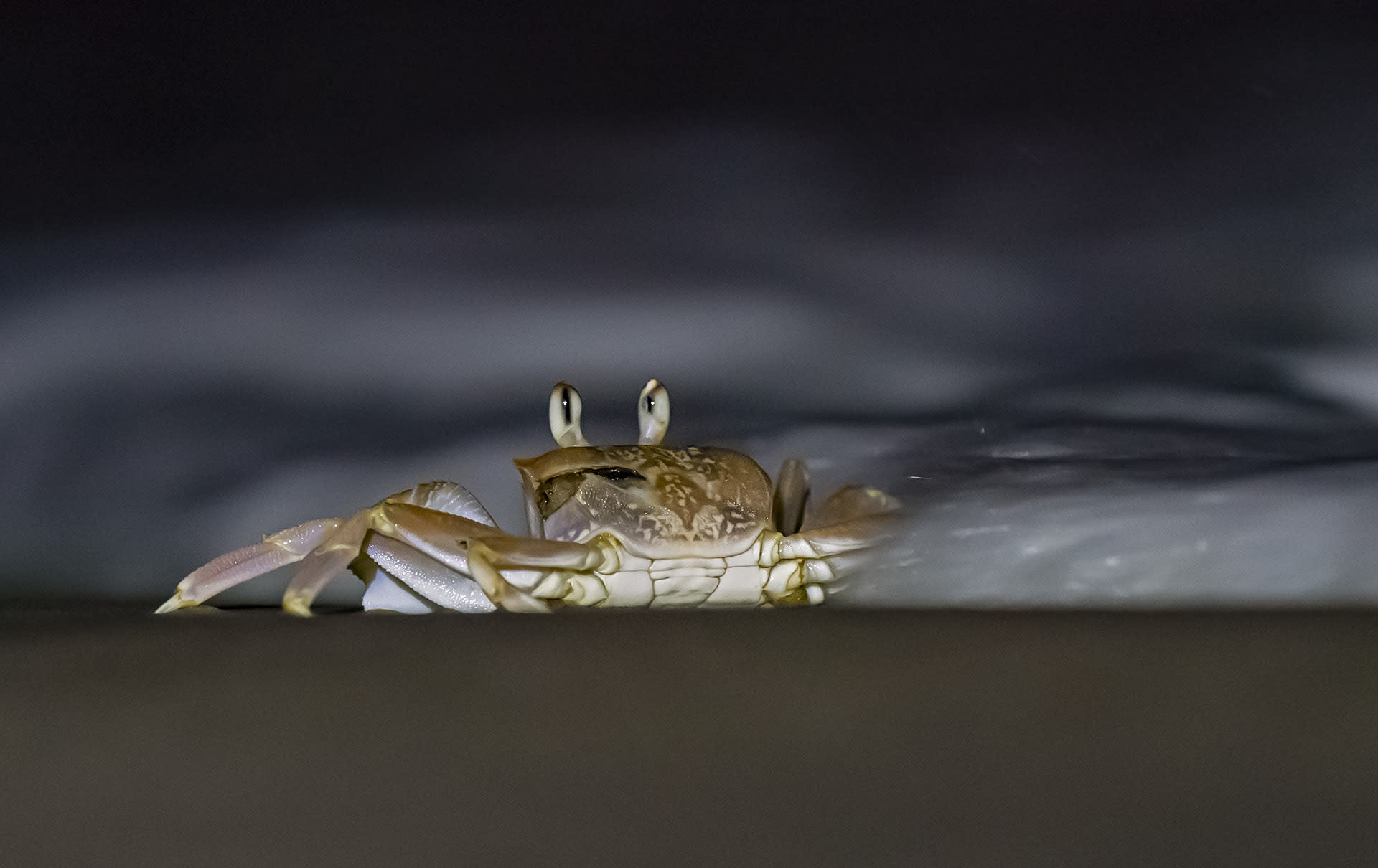 They often emerge at night. Once they are out, they scurry towards the brightest horizon — the moonlight bouncing off the waves. Yet, their very first challenge is the hardest. They must swim against the current. Many, pushed back the by the waves, do little backflips and somersaults before they scamper back. Some are snapped up by saltwater crocodiles and ghost crabs. 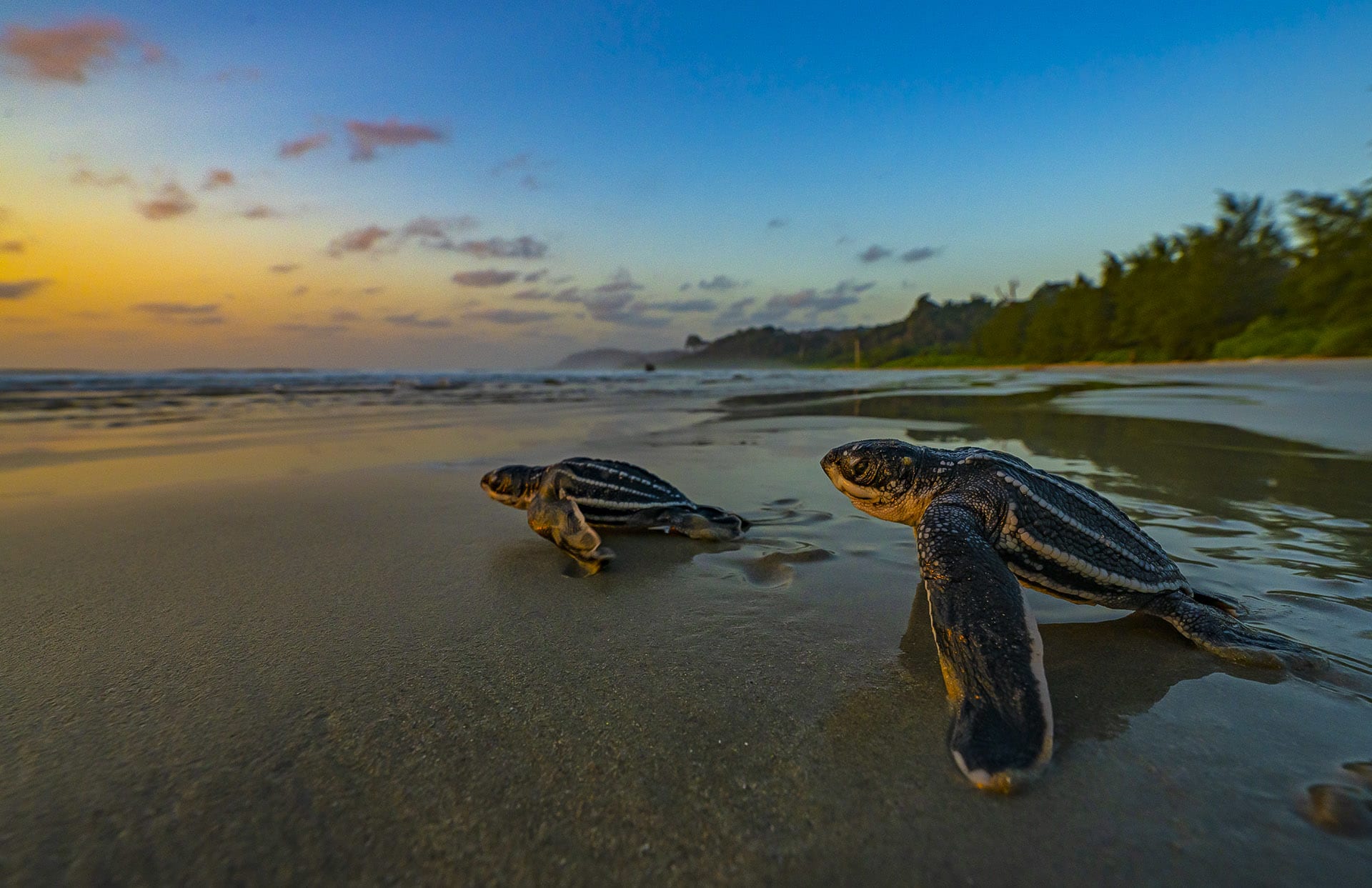 Once they hit the waters, for several days they swim in a frenzy on reserve energy, trying to get past predatory fish. Only one in a thousand survive. When they depart, they are also imprinted on the Earth’s geomagnetic field — sort of like an inbuilt GPS. This, along with other factors such as tidal currents, and maybe chemical cues, assists them to navigate between nesting and feeding grounds that are thousands of kilometres apart. Females return to the same region only to lay eggs, but males never see land. The leatherback is the largest, deepest-diving turtle, that has survived the twists and turns of the planet, for over a 100 million years. But a new emerging interest in the Andaman and Nicobar islands is set to turn their fate. In January 2021, the National Board for Wildlife (NBWL) cancelled the protected status of Galathea Bay Wildlife Sanctuary for the construction of a transhipment port. The site along Little Andaman that Swaminathan has been monitoring for a decade, is slotted to be developed as a “leisure zone” with a film city and a tourism zone. What will happen when this leatherback returns for another nesting season? Will she face floodlights instead of a dark coast? Will she abandon her plans with a promise to never return?