Shared Spaces: The Leopards of Jawai in Rajasthan

Danger is a relative concept. “Which animal is dangerous depends on who we ask, when, and where,” writes ecologist Vidya Athreya in an article in the Times of India. “A construction worker in urban India may consider even roadside domestic dogs dangerous. A farmer in rural India could perceive snakes in his fields as deadly, and I find vehicles far more dangerous than either dogs or snakes.” Danger, she writes, is shaped by numerous factors, including landscape, lifestyle, wealth, age, occupation, religion and so on.

In Bera, Rajasthan, locals have lived with leopards for decades, maybe even centuries. Bera is a small town in central Rajasthan’s district of Pali, an area in the rocky Aravalli Hills fed by the Jawai River, and characterised by scrub forests. Bera’s human community of around 10,000 (2011 census) inhabits the flat land, and a thriving population of leopards reside the region’s rocky caves. Media reports frequently refer to it as “Leopard Country”.

Like Bera, there are actually, numerous examples of humans and leopards living in close proximity to each other, from rural communities in Himachal Pradesh to mega-urban settings like Mumbai, where the cats have been photographed prowling building compounds by night. These glimpses, however, are few and far between and often the result of skilled camera-trapping and immensely patient wildlife photographers.

Bera is an anomaly: it is one of the only places (on the planet, perhaps) where leopards don’t appear to be shy. “It is only in Jawai, and Sri Lanka’s Yala National Park that leopards are allowing people to watch them,” says Athreya, who has been studying human-leopard interactions for over eight years. That is not to say that the leopards here are tame, or even friendly. But they are frequently sighted perched on rocky outcrops or lounging by the village temple, which is remarkable for a species that is largely in stealth mode as far as humans are concerned. The question is why? 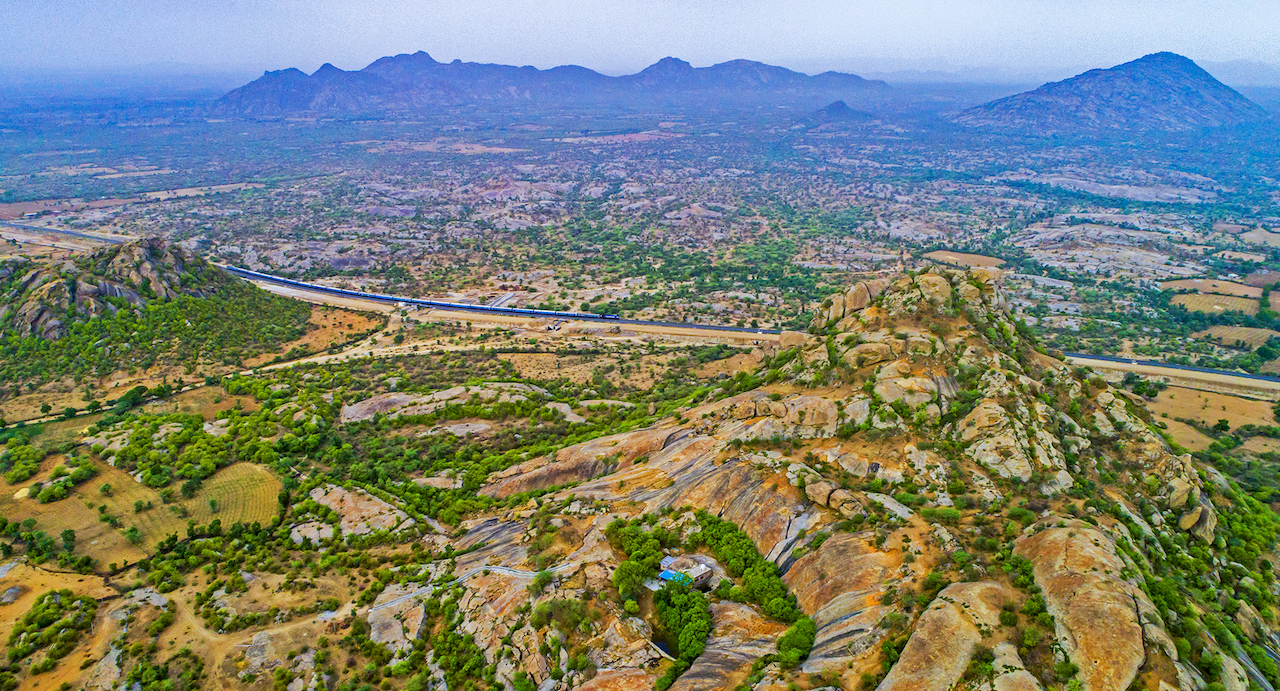 Theories about why leopards have penetrated human habitation abound. Some believe that Bera’s scrub and rocky landscape is ideal for leopards, as the hills have natural caves where the leopards spend their days, and tree cover for their hunting hours, after dark. Others suggest that the leopards’ presence is a result of habitat fragmentation and diminishing prey base. Near human habitation, these big cats find the promise of food.

Some of the locals of Bera belong to the Rabari tribe, a community of nomadic livestock herders that now live a more settled lifestyle. Livelihood in the region comes from two principle sources: livestock (largely goats) and the cultivation of crops such as wheat, corn, millet, peanut, and mustard. Like many tribal communities, the Rabaris have a strong relationship with their habitat, and a deep-rooted understanding that they share their landscape with numerous species, including the leopard.

Athreya believes that the presence of leopards in Bera has more to do with the local community’s cultural acceptance of the animals as part of the landscape, rather than habitat fragmentation or the lure of easy prey. According to her, leopards have always inhabited the fringes of human habitation, both rural and urban. “Most rural populations are aware of this,” she says. “While in urban areas, we are now seeing proof of this because we have technology such as night-vision [technology] and camera traps to capture their movements.” This close-up image was taken near the village, and shows the power plant in the background.

Leopards are sighted in the daytime too, often in the vicinity of the Shiva temple in Peherwa. The shrine sits atop a long flight of stairs that is flanked by rocky caves, where leopards lounge on hot afternoons. Surprisingly, this does not inhibit locals from visiting the shrine to make religious offerings, nor does it seem to deter the leopards in the area. These two images were taken by photographer Dhritiman Mukherjee, within minutes of each other.

Rabaris illustrate how inherited culture, including myths, shapes our connection with the world around us. The community believes that the leopards are sacred animals, with a connection to Shiva, as the Hindu god is often depicted wearing a leopard skin. “If any leopard kills my livestock, Lord Shiva will give me double,” a herdsman from the village was quoted saying, in an article in National Geographic.

Being able to observe leopards in places like Bera has altered our understanding of the animal’s behaviour. For decades leopards were considered solitary creatures that gathered only to mate, but photographic evidence of them in groups like these, have caused researchers like Athreya to reconsider. “We now know that females are almost always accompanied by cubs, young and subadult,” Athreya says. “Our study in Maharashtra has yielded evidence of a subadult mother and son resting together, and roaming around during the night-time, and we’ve got pictures of them on the same trail, within half an hour of each other. So, they are not social like lions, but they are certainly not solitary.”

Seeing groups of leopards together raises questions about the territorial nature of leopards. The popular understanding is that leopards have clearly marked territories that do not overlap with each other, but Athreya and photographer Mukherjee, both have evidence that suggests the contrary. “In these two pictures, you can clearly see two different leopards — one male, and one female — in the same cave,” says Mukherjee. “Both images were taken on a single trip to Bera, which lasted about ten days.”

Athreya has a more fluid definition of territory in the leopard world. “I think of territories more like homes, in the human sense,” she says. “We have homes, but we are not restricted to that space. In the same way, leopards have ‘homes’ or ‘territories’, but that does not mean that they do not venture out of this space.”

Despite the big cats in Bera being “the largest concentration of leopards on the planet”, according to the New York Times, there is a remarkable absence of human-leopard conflict in the region. “Occasionally, leopards do enter the village, and take livestock, but this happens rarely,” says Mukherjee. “When it happens, the owner is provided with monetary compensation by the Forest Department.” This image was taken when a veterinary doctor (handkerchief across his face) was examining a deceased cow belonging to a Rabari herder, in the presence of Forest Department officials, as part of the compensatory process.

The leopards in Bera do not rely on livestock for food, as evidenced by the presence of wild animal carcasses in the forests around the region. This image of a nilgai kill was taken inside a private piece of land, a little over ten acres in size, parts of which were cultivated. “There is one hill on the property,” says Dhritiman, “where some leopards live. I saw a total of four individuals there during my stay”.

The relationship between humans and leopards in Bera raises many questions, the most crucial being whether it is really possible for human beings to coexist with wild animals, especially big cats like leopards. “Absolutely,” says Athreya. The ecologist believes that “a lot of societies like the US, Africa, and India have a long history of shared spaces, that was altered under colonial rule. We lost thousands of animals during British rule, because they were declared vermin and culled away”. Lately, however, Athreya believes “we might be returning to our own narrative, of an interwoven existence”. 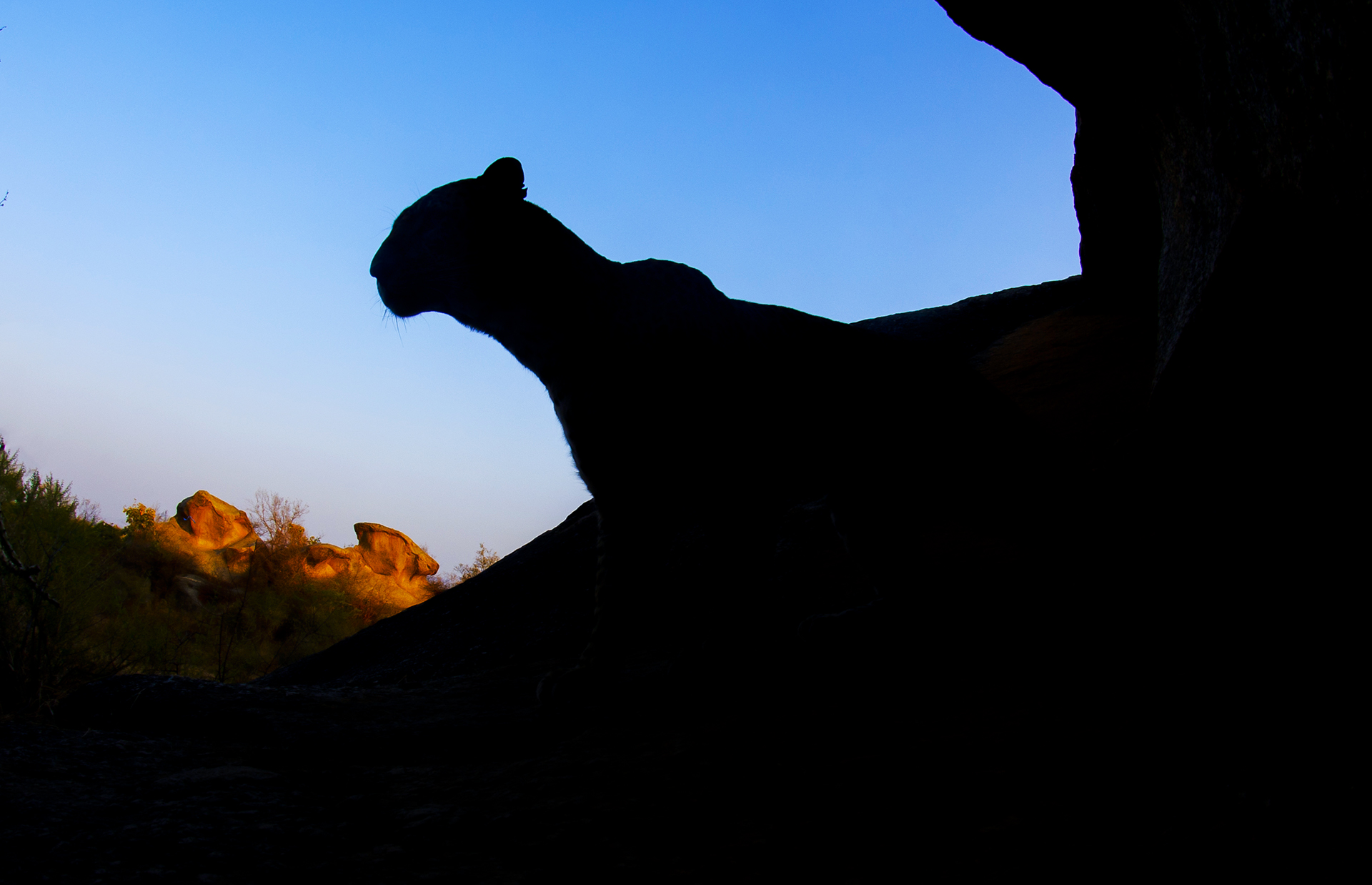 Athreya believes this the idea of coexistence is something rural communities like the Rabaris have always known, because they share space with animals big and small. “It’s not a big deal for them, but it is a leap for biologists and conservationists that have received training in the West, where the commonly held belief is the separate spaces narrative: a land for people and separate land for wildlife.” As a result, complex conservation issues like human-animal relationships are reduced to measurable metrics, like economic damage, or death tolls. When in reality, “Humans and wildlife interact with each other in ways which can range from reverence to extreme conflict”.

This binary approach is exemplified in India’s conservation approach of creating separate spaces for wildlife and human beings. If wild animals were to live exclusively in the tiny protected areas assigned for them,” argues Athreya, “they would all be dead by now, due to inbreeding.” She says that every creature is adaptable. “If this weren’t true, we wouldn’t have bears, elephants, and tigers in India. The only reason there aren’t more examples is because of human-response, not because of the animal.” In an exemplary paper on human-leopard relationships by Dhee et al, the author writes that locals in their study spoke of "the leopard, not as a wholly instinct‐driven creature, but as a thinking being with whom they constantly negotiate space and access to shared resources”. It is an approach that locals in Bera appear to have embraced. The question is: can the rest of us follow suit?