Hunting is not all brawn. It is a fine balance of patience, intelligence and strategy

The marsh crocodile (Crocodylus palustris) or mugger is a master predator of the aquatic habitats it inhabits. Stealth, strategy, and an element of surprise are the secrets to its success. But unlike its larger cousin, the saltwater crocodile (Crocodylus porosus), it rarely goes after big prey and is satisfied making a meal of birds, fish, snakes, and other smaller reptiles. Small muggers have also been observed feeding on insects, snapping up moths and winged termites called alates, mid-flight.

Its unique anatomy, evolved over millions of years, plays a critical role in its hunting strategies. Despite a large body, most of it remains hidden underwater during a hunt. Its scales are sensitive and act as a bonus sensory organ that can detect the slightest movement in the water. When the time is right, it can snap up prey at lightning speed. “The mugger has evolved over 90 million years and has almost perfected form and function for an amphibious, carnivorous life,” says Gerry Martin, herpetologist.

The mugger is a medium-sized crocodile that is found in freshwater ecosystems such as rivers, lakes, and marshes from Iran to the Indian subcontinent. It grows up to 3-4 metres in length and has the broadest snout of all in its family. It is an “opportunistic feeder with very low metabolism. It eats when it can but may also go without food for up to seven or eight months when prey is hard to come by,” says Martin.

But hunting is not all brawn and bite — it also requires strategy and keen observation. During the summer, when pools start drying out muggers are seen “herding” fish and locking them off in narrow parts of the waterbody, write Romulus Whitaker and Zai Whitaker in an IUCN report. Once cornered, the fish start darting and leaping in panic, and a few end up straight in the open mouth of the mugger.

Recent studies have also confirmed that muggers are extremely intelligent and social beings, capable of tender parental care, a well-developed communication system, and elaborate courtship rituals that include circling each other, blowing bubbles, and gently brushing jaws. “We tend to think of muggers only as dangerous, scaly beasts, but there is so much texture to this wise reptile. On most days they live a quiet, peaceful life,” says Martin. 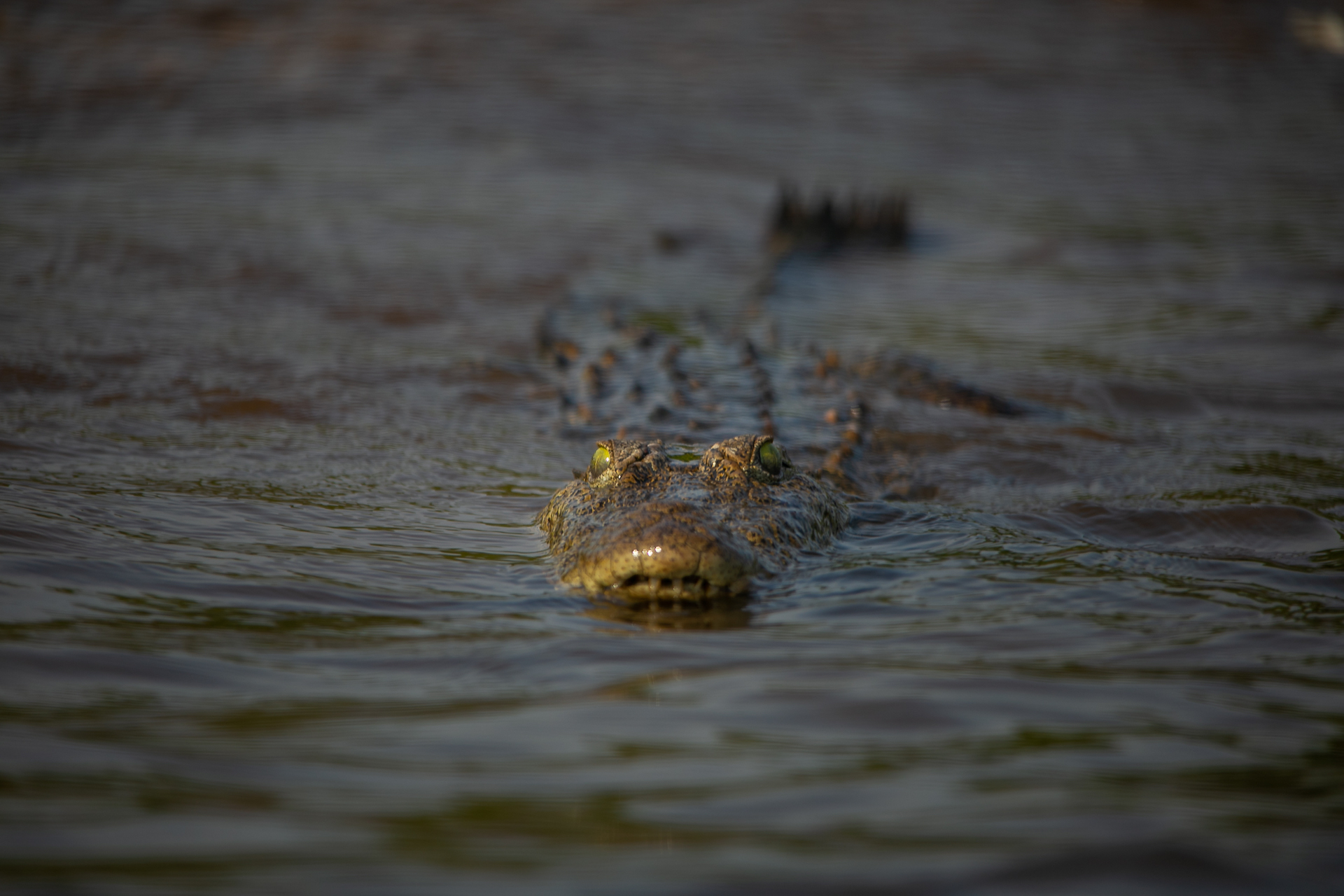 Like most of the Crocodylidae family , muggers rely on what herpetologists call the “minimum exposure” posture in water. While on a hunt, only their eyes, ears and nostrils stick out of the water’s surface, while the body remains hidden. To unsuspecting prey, these tiny floating objects belie the brawn beneath. Photos: Saurabh Sawant (top), Shreeram MV (above) Cover photo: Saurabh Sawant

A mugger’s jaw is its most powerful arsenal. It has sharp, conical teeth that regrow through most of its life. Though it can snap prey with a bite force of over 2500 psi (humans have a bite force of about 160 psi) it cannot hold prey down and tear it. A small bird will be swallowed whole but eating large prey such as wild boar or chital needs a full-body workout or the death roll. “A mugger grabs prey and rolls with the body firmly in its mouth, jerking it around to tear off chunks,” says Martin. Their teeth are also used for more delicate tasks. “When an egg is ready to hatch, the female uses her jaws to puncture it with great tenderness, and let the young one out,” says Martin. Photo: Saurabh Sawant

The mugger’s body is covered with rows of tough keratin scales. But the scales are not just an armour — they are sophisticated, sensory organs. They contain receptor-channels that can detect touch, movement, temperature, and chemicals in their environment. A mugger can sense the presence of prey through the slightest vibrations in the water — which is how it hunts in the dark. Photo: Saurabh Sawant

The scales on the mugger’s back have bone deposits called “osteoderms” that give it the characteristic keeled structure. The mugger is a cold-blooded reptile and needs to bask in the sun to regulate its body temperature. Osteoderms help absorb and transfer heat to the rest of the body. Think of them as the croc’s personal solar panels. Photo: Saurabh Sawant 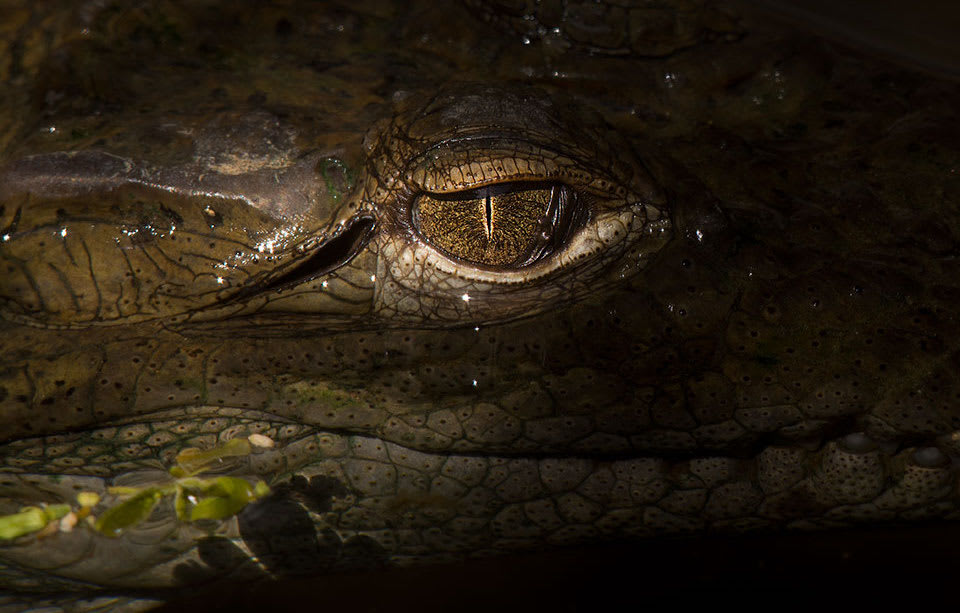 Muggers’ eyes have vertical, slit pupils that control the amount of light that gets in — they narrow when the light is bright and expand in the dark. While humans have upper and lower eyelids, this aquatic reptile’s eyes have a “third eyelid” called the nictating membrane which closes horizontally over their eyeballs when they slip underwater. “They are a mugger’s underwater goggles,” says Martin. Photo: Vipul Ramanuj 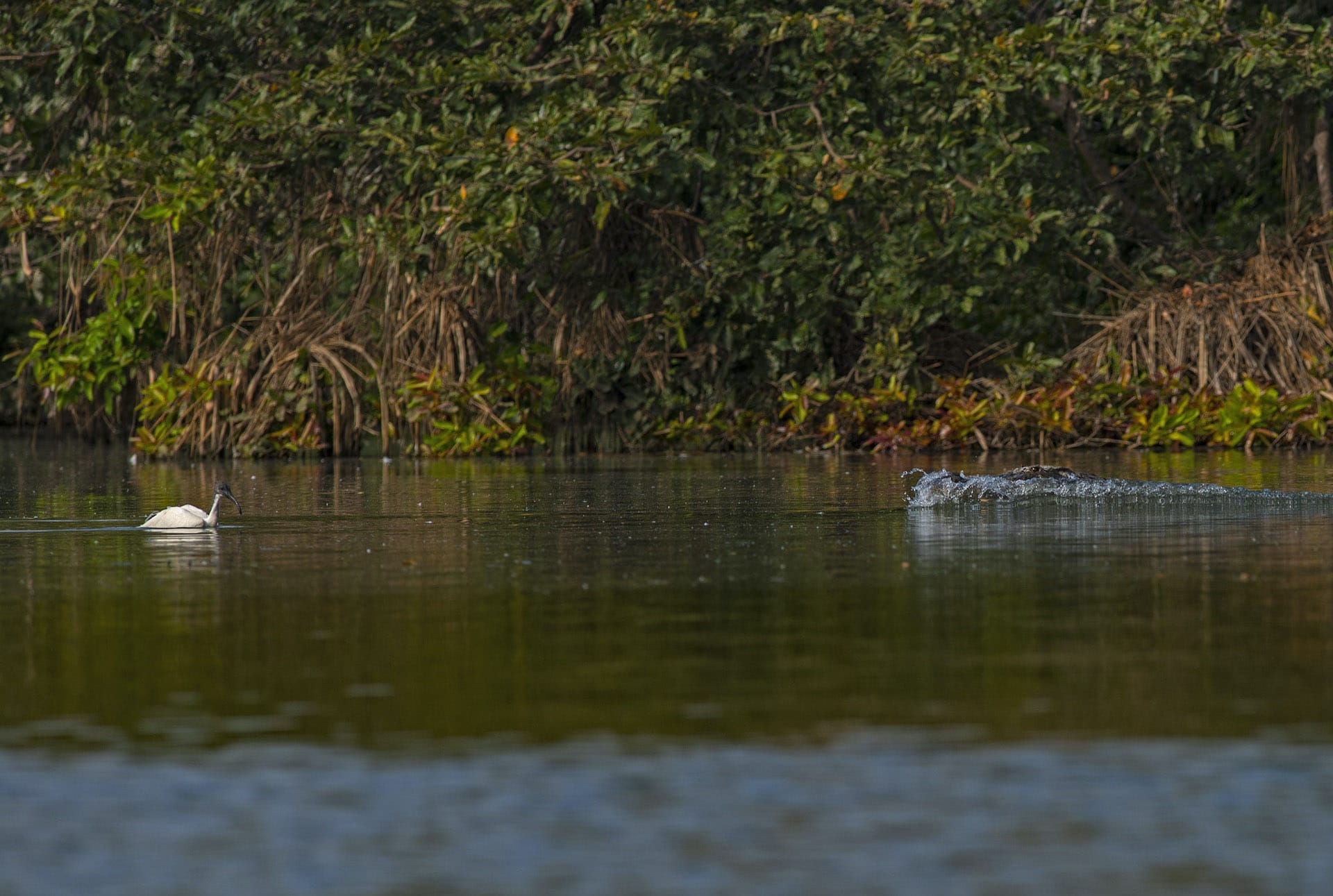 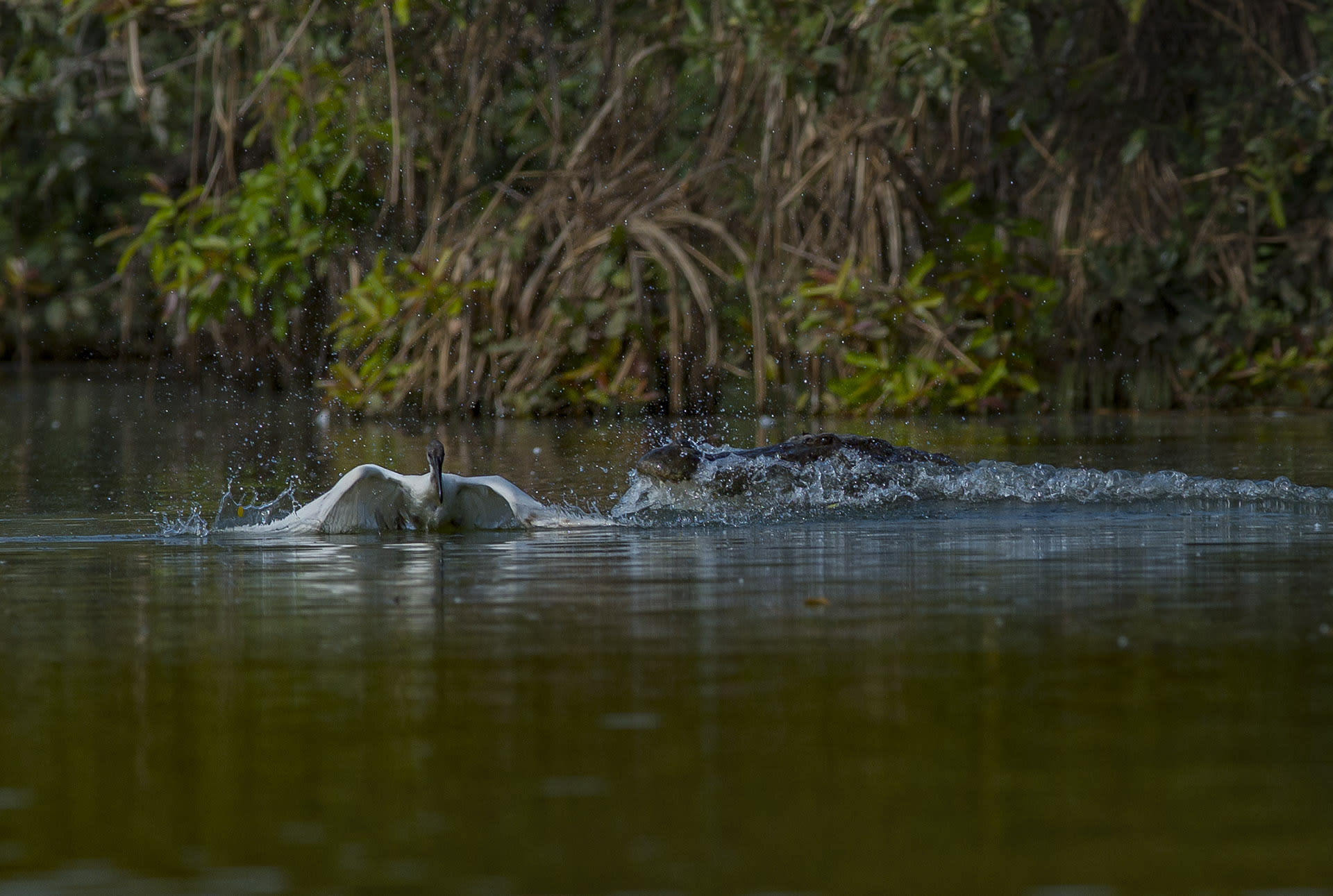 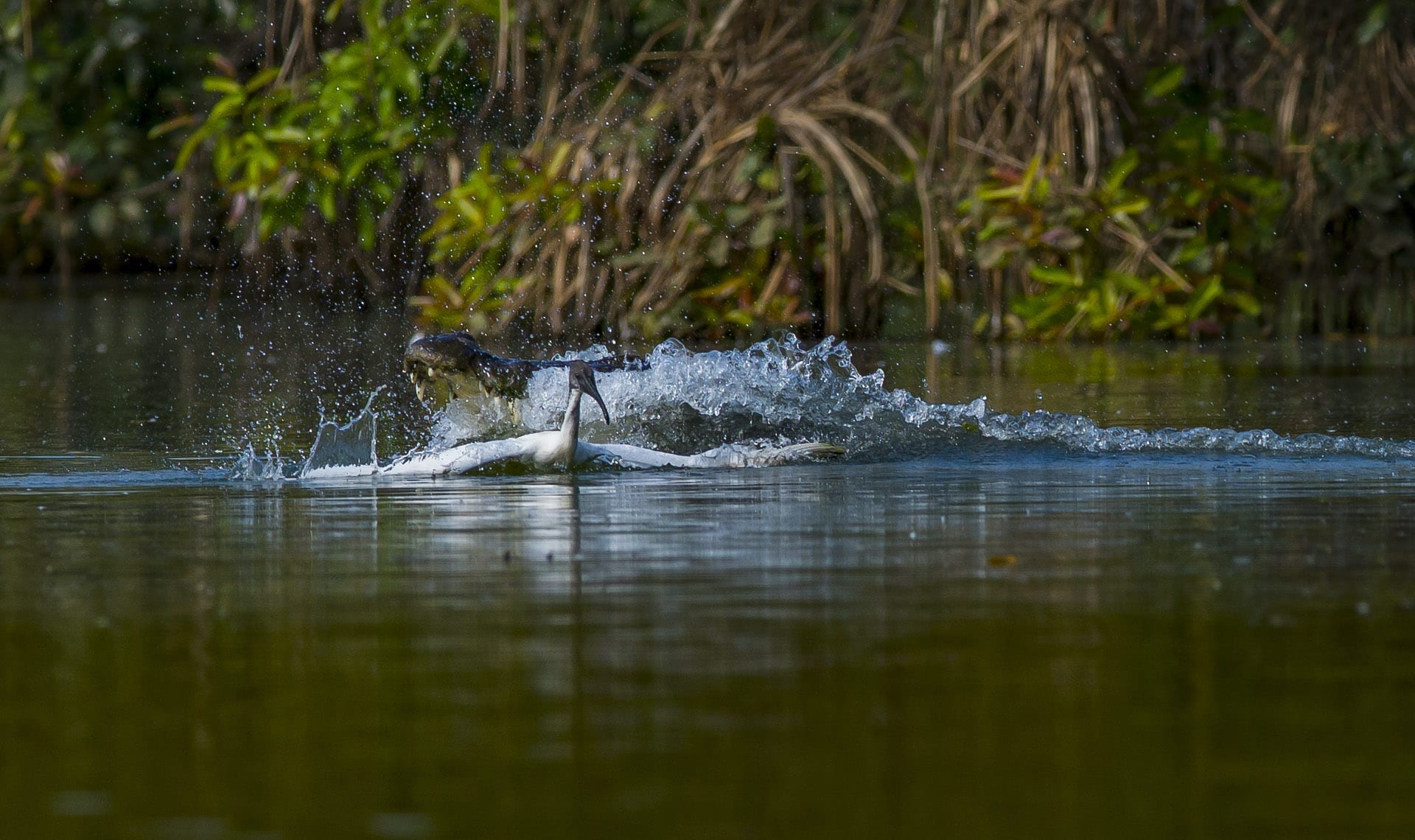 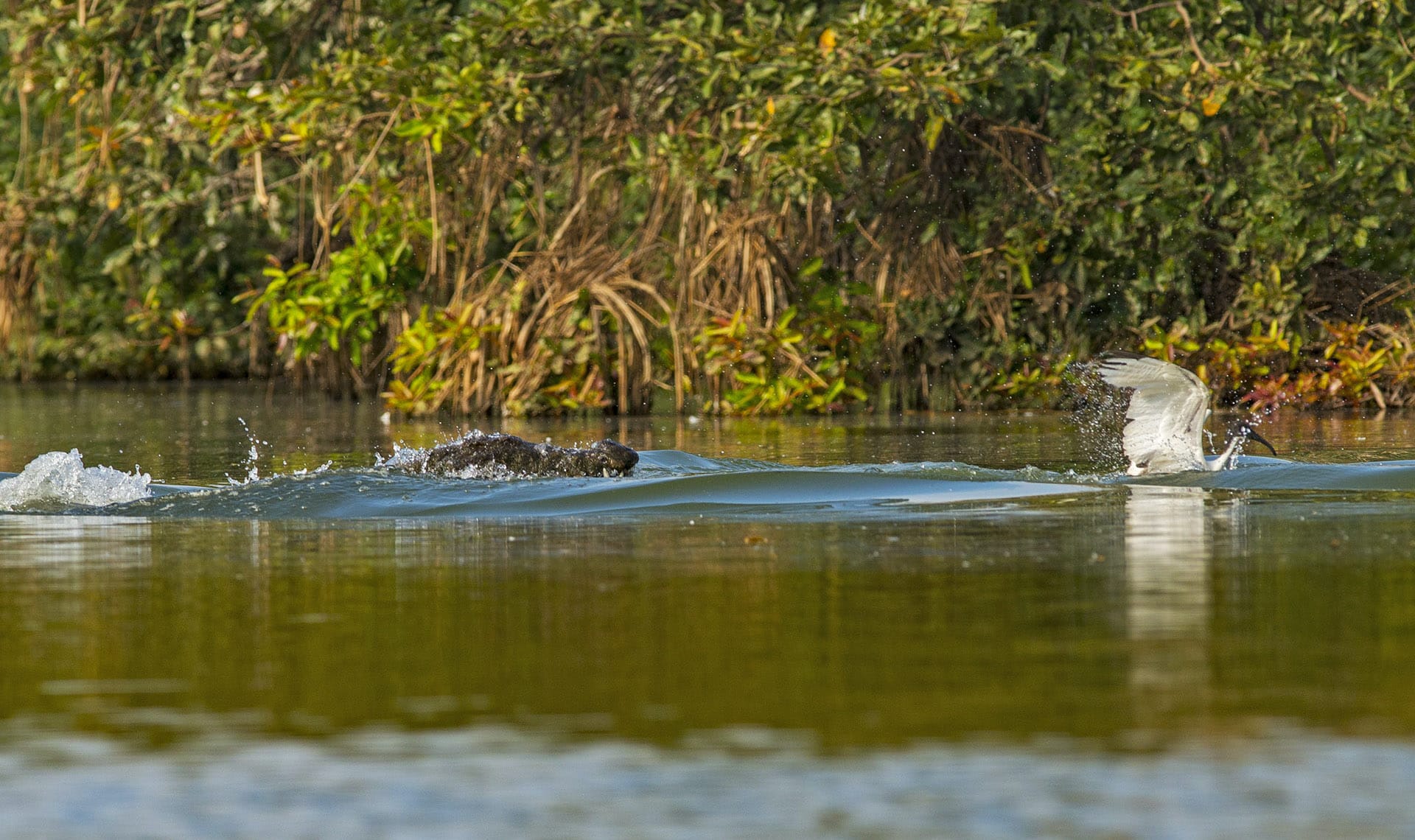 Though muggers often seem like they are basking on the banks without a care in the world, they are always alert and on the watch. Every winter, Karnataka’s Ranganathittu Bird Sanctuary welcomes birds that turn up to nest here. “I have seen muggers silently wait near the nests, waiting for juvenles to fly close to the waters, and quickly grab a meal. I have even seen them lunge and grab one perched on lower branches,” says Martin.

Dhritiman Mukherjee captured this sequence of a mugger hunting a black-headed ibis in the winter. “The ibis was injured. The mugger was quick to notice this. Though the ibis struggled and tried to fly, it became an easy meal for the mugger,” he says. Photos: Dhritiman Mukherjee 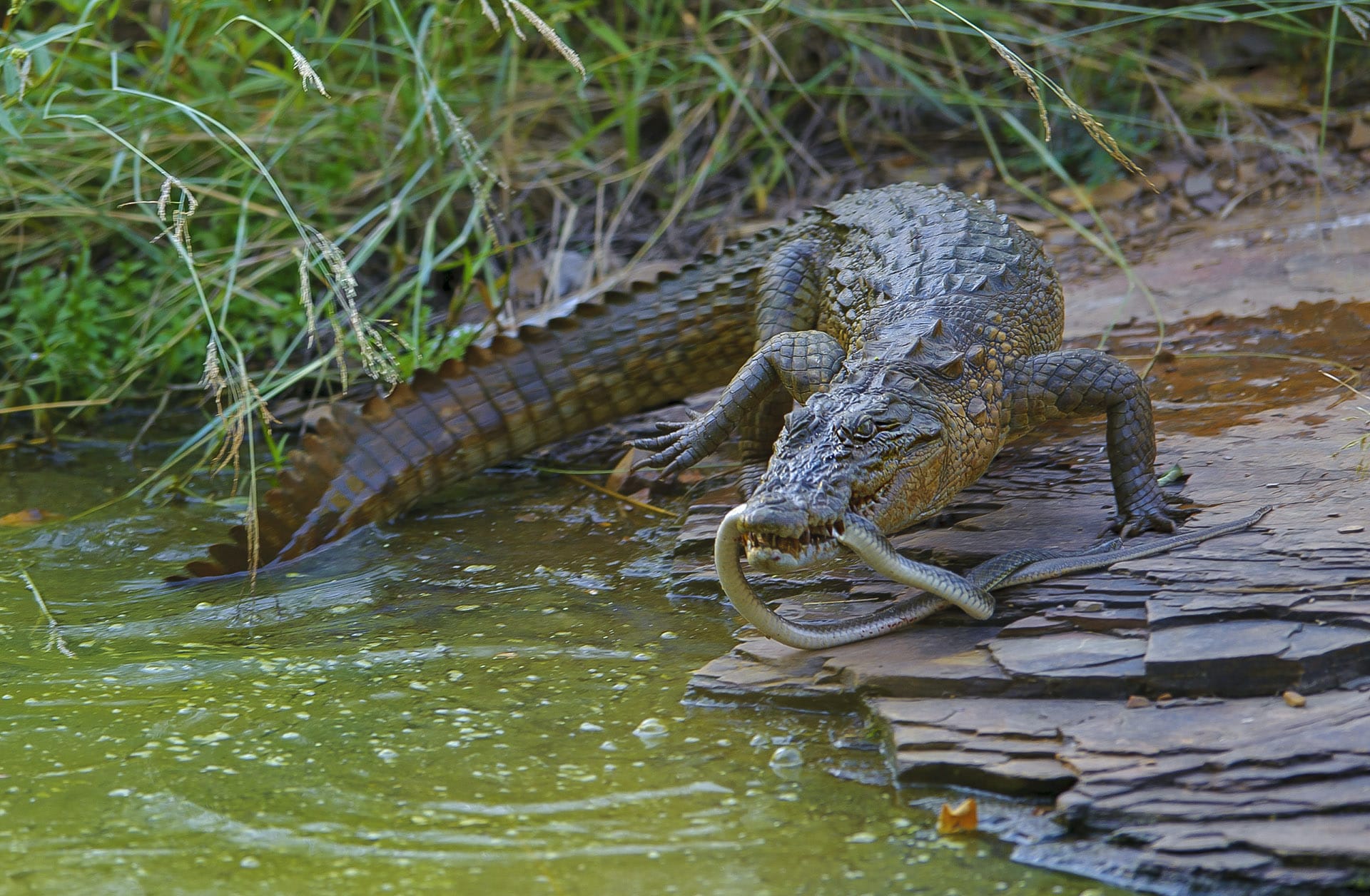 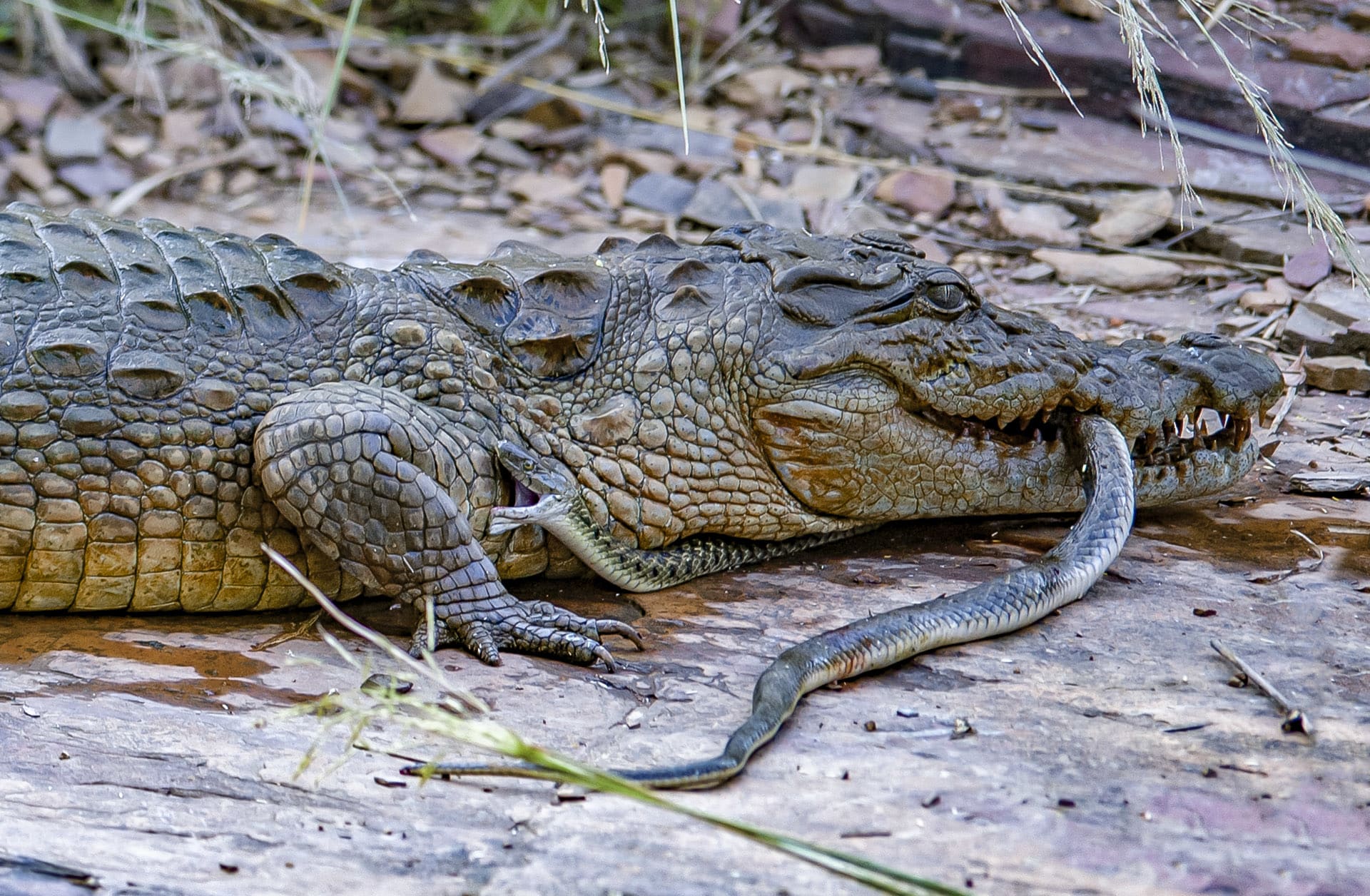 Mukherjee spotted a mugger hunting this checkered keelback water snake (Fowlia piscator) in Rajasthan’s Ranthambore National Park. “The snake did not give up without a fight. The image on the right shows the snake trying to bite the mugger back, however, its fangs are no match for the scaly armour,” says Mukherjee. Photos: Dhritiman Mukherjee

For this medium-sized crocodile, large prey is a challenge. Mukherjee photographed this mugger hunting a chital in Ranthambore National Park, Rajasthan. Once the mugger sunk its jaws into the chital’s rear, it dragged it from the banks to the deep end of the lake, submerged it a couple of times to drown and kill it, and then progressed with the death roll, to tear its body to pieces. The feast lasted for a couple of hours. Photo: Dhritiman Mukherjee

A mugger digs large burrows — sometimes as deep as 20 feet — to shelter during extreme weather. Females also use the burrows to lay eggs. “These tunnels not only help the mugger but are used by other species, such as snakes and other reptiles, as well” says Nikhil Whitaker, head of department at the Madras Crocodile Bank Trust. Photo: Nikhil Whitaker 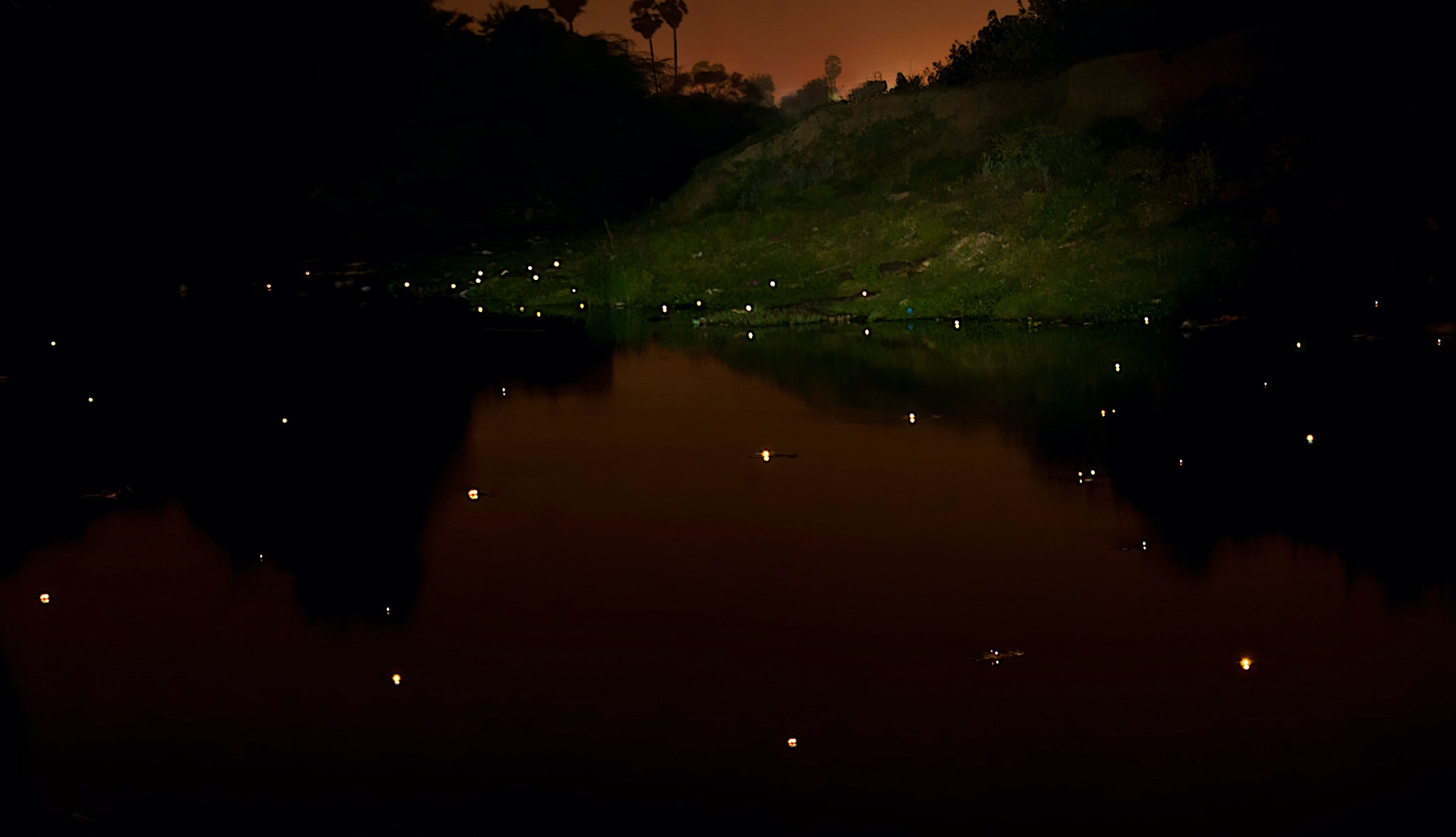 This is not a reflection of a starry night. The back wall of a marsh crocodile’s eye has layer of tissue called the tapetum lucidum , which reflects any light shining in its direction. While it allows the animal to see in the dark, it also produces the most spectacular eyeshine. Unfortunately, the adaptation has also been a curse. “For a long time, all a hunter or poacher needed to do was point a flashlight at night to reveal the location of a mugger, and shoot it between the eyes,” says Whitaker. Before the Wildlife Protection Act (1972) banned hunting and trafficking, unregulated poaching for crocodile skins had almost exterminated the species from most of its habitats in India. Currently, habitat loss threatens its survival and the mugger is listed as “Vulnerable” on the IUCN Red List of threatened species. This eyeshine is now used during wildlife censuses to count the number of muggers in the wild. Photo: Vipul Ramanuj