Hiding in Plain Sight: Mumbai’s Tide Pools and the City Beyond the Shore

It started because Sarang Naik was broke. As a college student and amateur photographer in Mumbai he yearned for the wilderness but travelling to faraway sanctuaries didn’t fit his shoestring budget. That’s when he turned his trusty camera towards the city — spending hours walking alone through urban forests, shooting flamingos in a wetland near his home, and photographing seagulls at the Gateway of India. In March 2017, at the crack of dawn, he followed members of a citizen science collective, Marine Life of Mumbai, to Marine Drive. Instead of walking along the promenade, the motley crew climbed over the ledge, and cautiously stepped on the four-legged tetrapods lining the coast. The tide was low. Standing on a slippery rock, surrounded by Mumbai’s murky waters, looking into the tide pools, Naik found a whole new world, that surpassed his wildest dreams, opening up.

Tide pools or “intertidal ecosystems” are one of Mumbai’s best kept secrets. John Steinbeck, the Nobel-prize winning American author, described tide pools as “ferocious with life,” and compared their richness to tropical rainforests. When the tide retreats, it leaves behind shallow pools that stay trapped in the shore’s rocky gaps and cracks. Some of the pools are large enough for a dip, others are palm-sized, but each one pulses with life.

Naik’s first years of exploring Mumbai’s intertidal areas were spent obsessively documenting everything. As time passed, his photographs evolved, and turned into a project to change how we perceive the city itself — as sites of wilderness, not just as ruthless engines of growth. His photographs began to hero wild creatures, while the city was merely the backdrop. And what better way and time to do it than when the sun sets and the city lights up in all its twinkling splendour. Naik spent two years meticulously planning this new project — learning where to spot these creatures, at what time of year, and then matched the location with the schedule of the tide to get the perfect twilight shots. “In some cases, a low tide coincided with the perfect evening light only about five to six times a year,” says Naik, who spent four years putting together this collection. “But it was worth the trouble.”

In these seemingly ordinary puddles, the most astonishing creatures thrive. There are sea slugs or wildly coloured marine snails with no protective shell, but ingenious defence mechanisms and a robust sex life. Sea fans come in many shades, and sway in the waters like old-fashioned handheld fans. There are sea anemones that look like ornate flowers, but their petals are tentacles packed with explosive stinging cells that paralyse prey. Plus, mussels, crabs, barnacles, sea stars, crustaceans, eels, and the occasional octopus can be seen. Cover photo: A city beyond the shore — a colony of zoanthids or soft corals, shot in ultraviolet light at sunset at Mumbai’s Priyadarshini Park.

On that first walk, Naik saw a large colony of sea sponges in defiant shades of green, red, purple, orange, yellow, blue. Sea sponges are marine animals that have bodies made of canals and pores. They are one of many creatures that reveal themselves when the tide recedes. Naik showed me these creatures over a Zoom call in October 2020. In a pre-pandemic world, I would have followed him to the intertidal zone, crouched over pools to discover the world I had missed despite having lived in the city and lounged along its coast. I was astonished to find that the intertidal ecosystem is indeed “ferocious with life” yet hidden in plain sight. 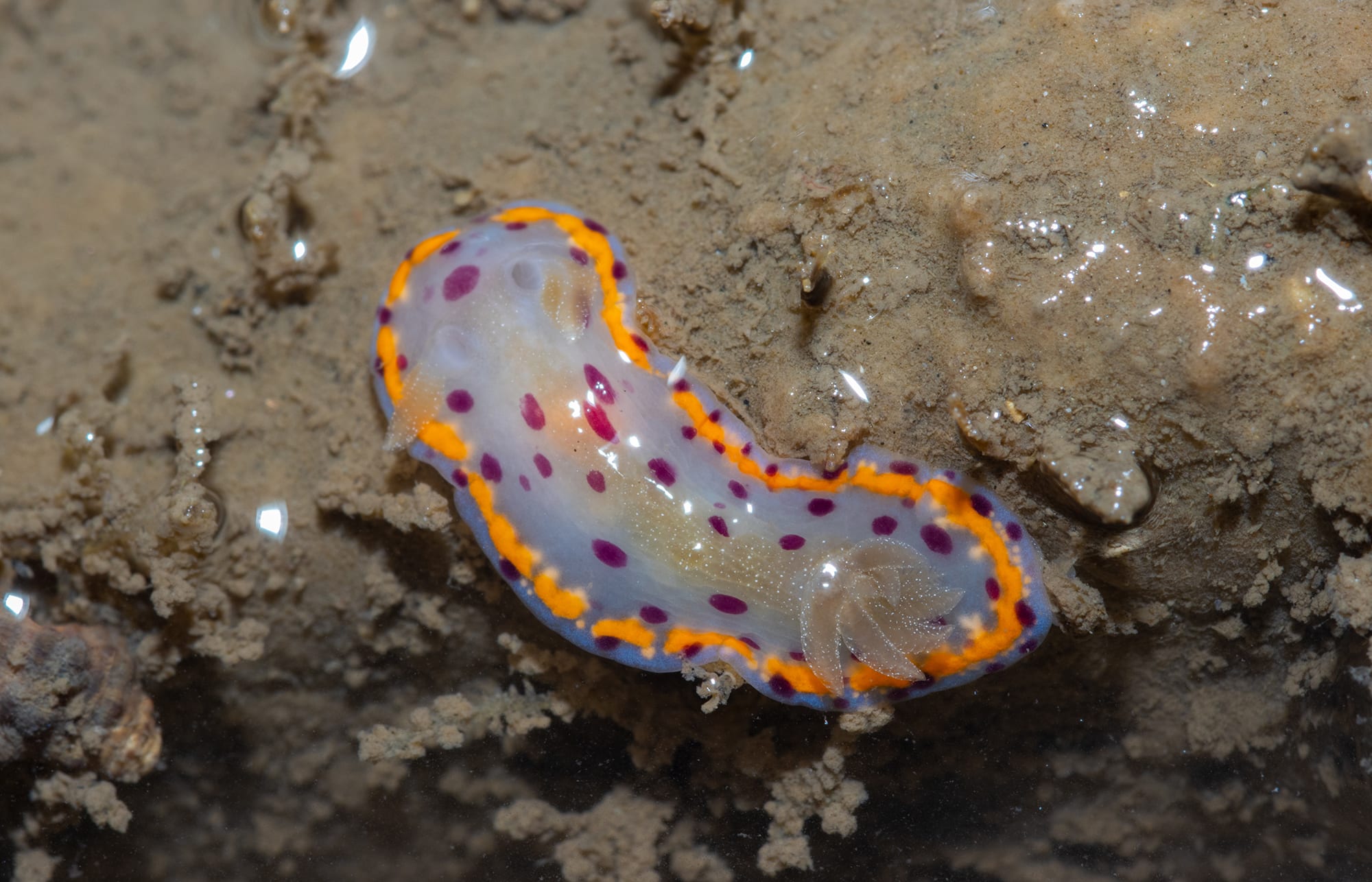 “This ecosystem is on the coast of one of the most crowded cities in the world, yet we know so little of it,” says Naik. In November 2018, a member of the citizen collective Marine Life of Mumbai (MLOM) spotted a milky-white sea slug with purple and yellow patterns along the coast of Haji Ali. Bombayana sea slug (Goniobranchus bombayanus), named after the city, was first described in 1946, but there has been no record of it since then. The sighting made news headlines, “Bombayana slug spotted in Mumbai after 72 years”. However, many marine biologists believe that the slug has possibly always been around but escaped notice because no one was actively looking for it.

Juhu Beach: In November 2016, late at night, the waves at Mumbai’s Juhu Beach turned a glowing neon blue. The event, also called a “bloom”, is caused when marine microorganisms called phytoplankton gather in great numbers and glow. These phytoplankton are an intriguing variety called Noctiluca scintillans, commonly known as sea sparkle. The phenomenon is often seen on the pristine coasts of the country, but for India’s commercial capital, it was rare. “The phenomenon is seen almost every year along the western coastline of India, but in Mumbai, it was only recorded in 2016,” says Naik. 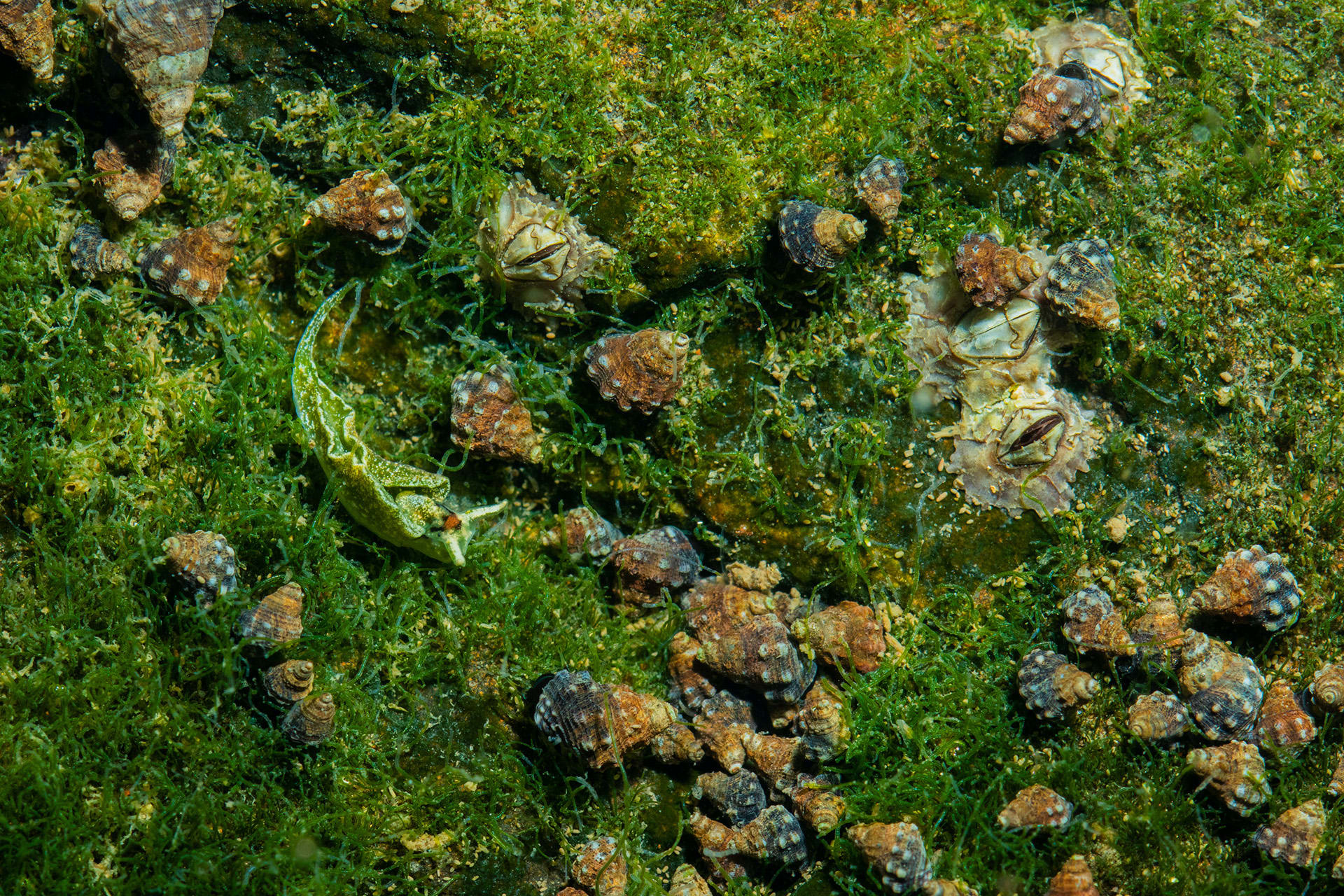 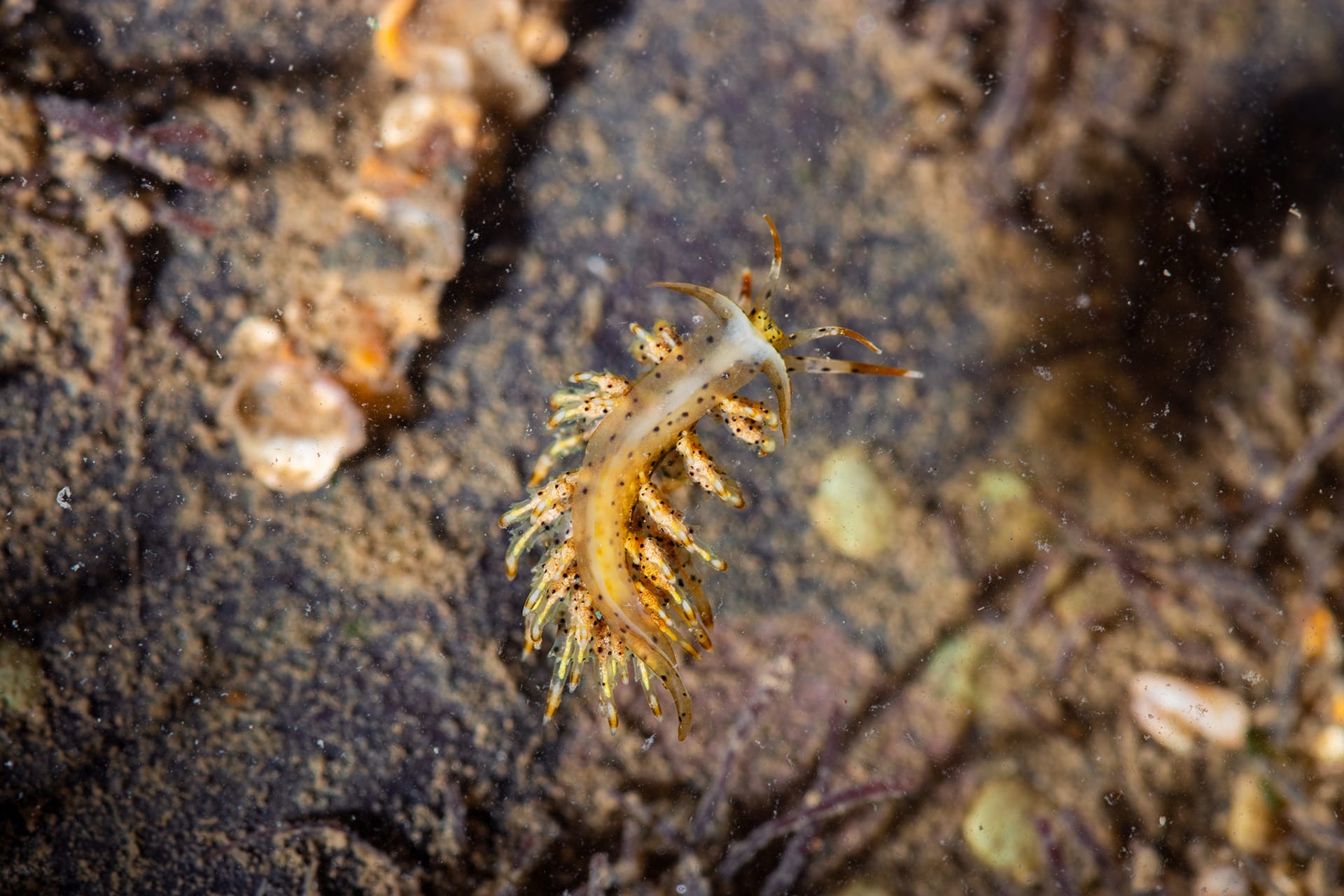 Across Bandra Bandstand squishy, sluggish, and flamboyantly coloured sea slugs swim in shallow pools. Sea slugs are marine snails, without shells. You’d imagine that a soft-bodied creature without a protective cover would keep a low profile, but these glamourous creatures parade their colours, and with good reason. Several species of sea slugs contain toxins, and their bright colours are a warning to predators. (Top) Bandra Bandstand: Cratena pawarshindeorum are slugs that not only feed on hydroids — marine creatures that look like plants but are actually animals related to jellyfish — but also live, mate, and lay eggs on them. Look closely to spot strings of the eggs wrapped around the hydroid. (Above left) Mahalaxmi: Elysia hirasei is a sapsucking slug the size of a fingernail. It was photographed on the rocky shores behind Mahalaxmi Temple. The slug feeds on chloroplast in marine algae that grow like carpets on tide pool rocks giving them a green colour. Huge congregations of sea slugs are known to mate in the tide pools behind Mahalaxmi Temple. A palm-sized tide pool can accommodate 20 to 25 of these creatures. (Above right) Mahalaxmi: This sea slug, identified as Eubranchus virginalis was spotted swimming upside down, using surface tension to move around the tide pool. It is easily recognised by the characteristic black spots scattered all over its body. 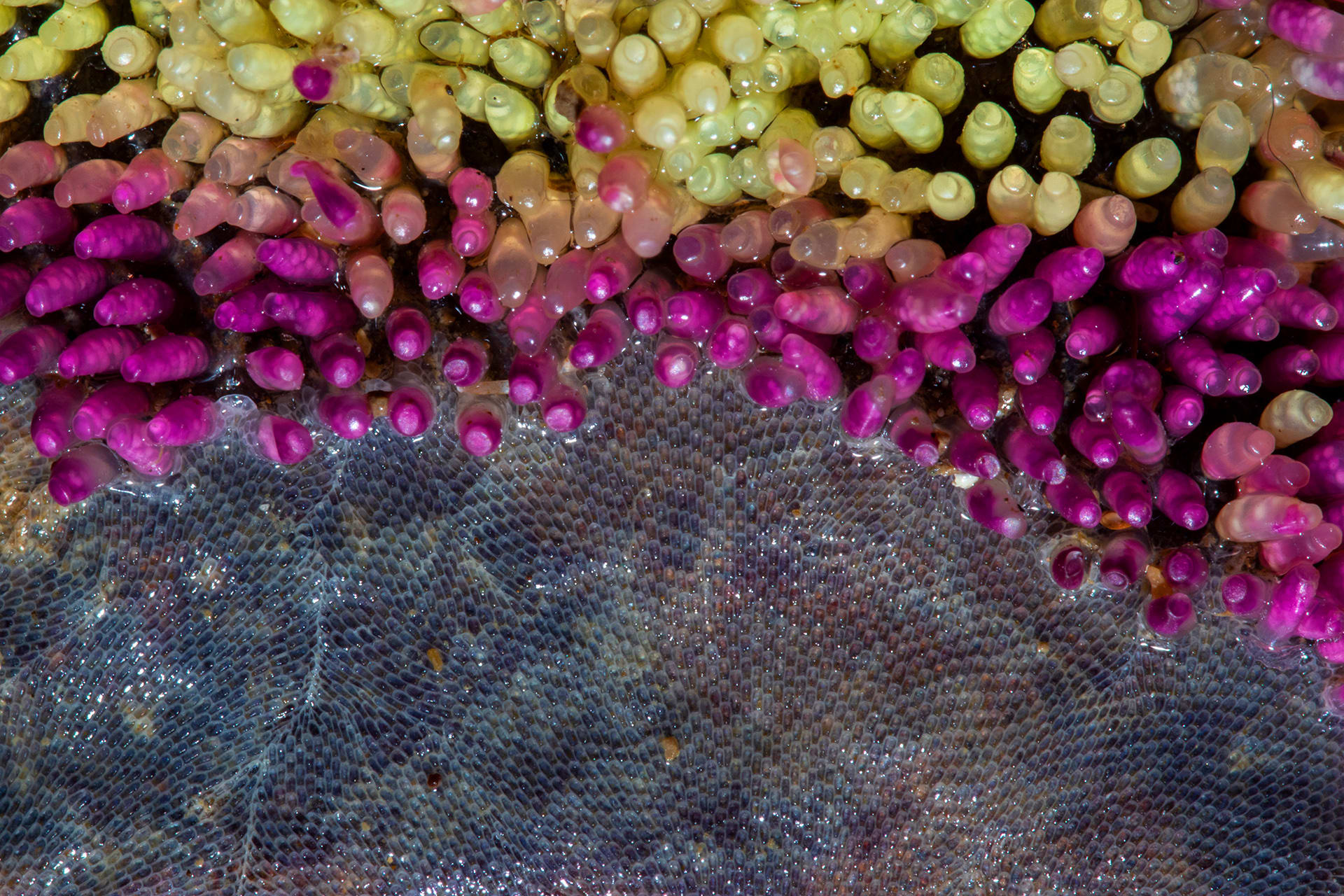 Juhu: The murex shell is a carnivorous sea snail that feeds on small marine creatures. Each candy-coloured capsule can contain about 20-40 of its eggs. Yellow capsules contain unhatched eggs, that turn a bright purple once the larvae hatch and swim in the safety of the capsules for a while, before they take on the world outside. “Most of the rocks in the Juhu tide pools are covered with these eggs,” says Naik. Besides the capsules, an intricate basket-weave like pattern stretches across the rock — a colony of microscopic aquatic invertebrate animals called bryozoans.

Juhu: Highfin moray eels are nocturnal predators that come in with the high tide and stay back in tide pools. During the day, they prefer hiding in cracks and crevices, with only their heads popping out. “They can look menacing as they’re constantly opening and shutting their mouths, but that’s just the way they breathe,” says Naik.

Juhu: A few kilometres from the residences of some of Bollywood’s biggest celebrities, are other stars that are also worthy of much fame. The sea star (starfish) has hundreds of tiny, tubular legs that allow it to navigate across the floor. If a sea star loses an arm to a predator, it can grow a new one. But here’s what makes them most fascinating — since most of their important organs are located on their arms, in some species, a sea star can regenerate itself even from a detached, bitten-off arm. 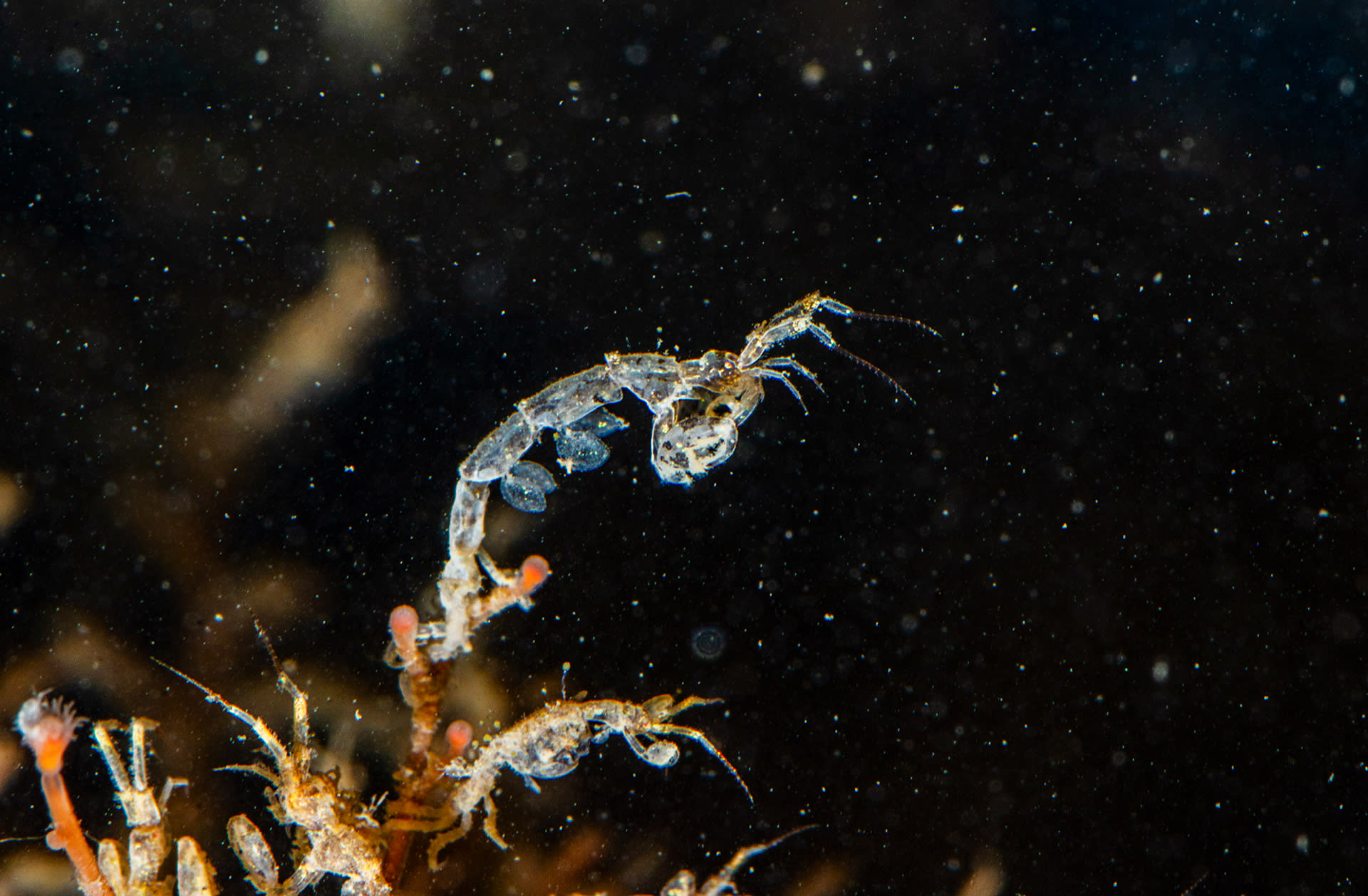 Gangly, and stick-like, skeleton shrimps may seem eerie at first, but are “hilarious to watch,” says Naik. They are technically not shrimp at all, but amphipods, an order of crustaceans. These creatures are no more 2-3 mm in size and are found in the hundreds on hydroids and corals. When several swim with their characteristic awkward grace, they look like a poorly coordinated, shallow-water flash mob. 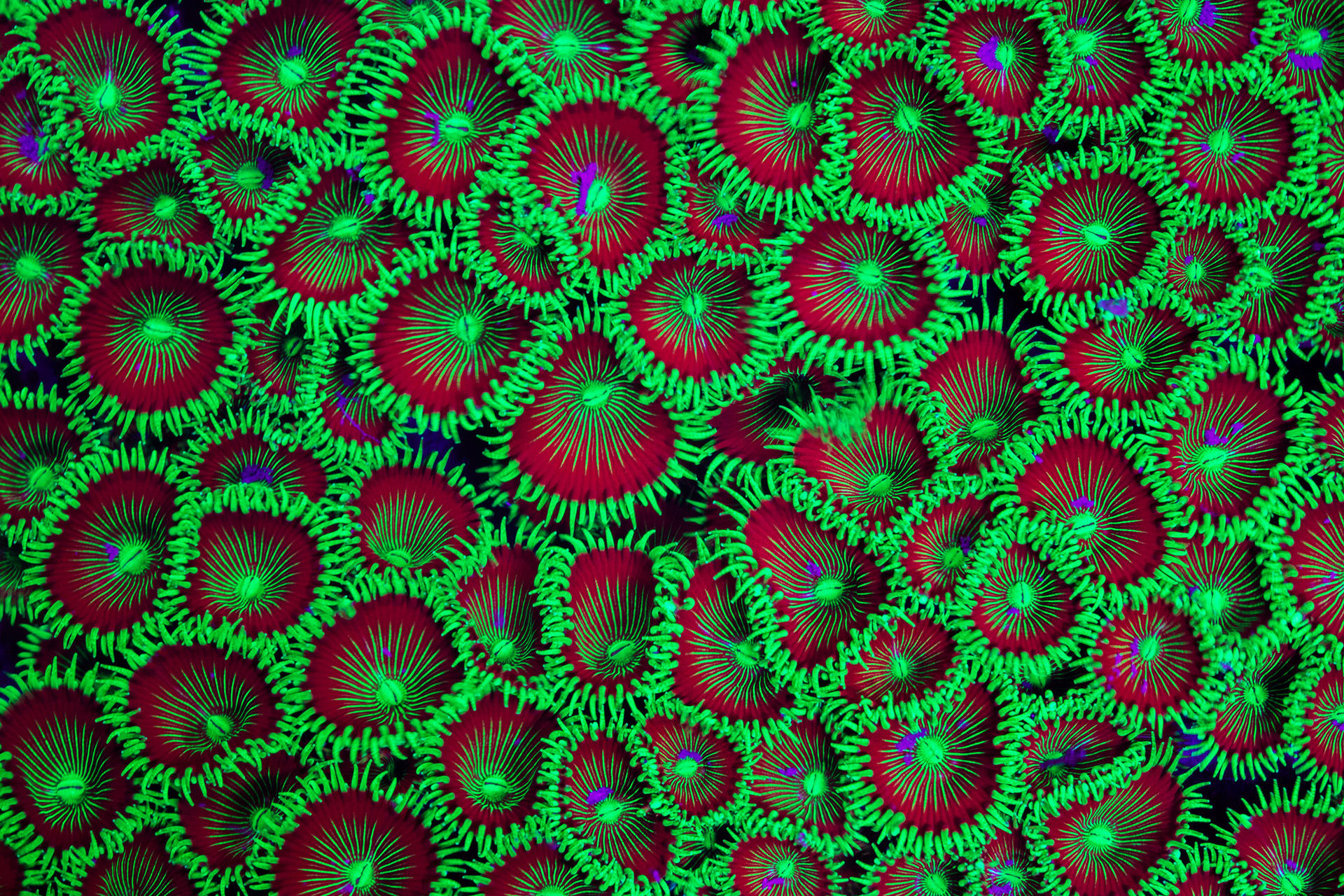 Priyadarshini Park, Napean Sea Road: Carpets of brightly coloured zoanthids (photographed under UV light) line the rocky shores of Priyadarshini Park. Zoanthids are fast-growing soft corals that stay attached to rocks. They use their free tentacles to trap moving organisms and feed on them. They also share a symbiotic relationship with zooxanthellae, marine algae that live inside them. The marine algae produce food for the zoanthids through photosynthesis, giving them their emerald green colour, while the zoanthids provide them with a secure home.

Haji Ali: Once you are hooked to “tidepooling” Naik tells me, the tide rules your life. “I have a tide pool table handy on my phone at all times,” he says. However, several of these locations, including the one above, are now being reclaimed by the ongoing construction of the Coastal Road, a 29.4-km freeway that will run along Mumbai’s western coastline. Before the lockdown, activists were building a strong case to protect these rich ecosystems, but the lockdown has hampered their efforts, and construction is on full swing. “We had just started discovering all that existed on our coast,” says Naik. “Now we may never know what we have lost.”

Listen to Naik talk about his journey of shooting these shores, and what it means for him to helplessly watch them being transformed.

is a nature and wildlife photographer from Mumbai specialising in creative and abstract photography. One of his long term projects is to document and showcase Mumbai’s urban biodiversity.