In remotest Arunachal Pradesh, a proposed new road portends change that can transform the tropical jungles and riverine habitats invaluable to the species that live there

Vijoynagar is an outlier. This hilly, forested region in Arunachal Pradesh is the easternmost settlement of India. It is also one of the remotest parts of the country, bordered by Myanmar on three sides, and the thick jungles of Namdapha National Park on the fourth. There are no trains connecting the 16 villages of Vijoynagar, nor are there buses, taxis, or any kind of public transport. In fact, there are no roads at all. The closest town is Miao, 157 km and a six-day walk away even for seasoned locals.

On the other hand, this isolation is a boon for the region’s wildlife. The protected landscape of Namdapha National Park covers an area of 1,985 sq km, encompassing dense tropical jungles, high mountains, and freshwater riverine habitats. This Eastern Himalaya ecosystem is invaluable to the thousands of species that live here.

The landscape of Namdapha is familiar to locals of Vijoynagar, many of whom belong to the Lisu tribe. The Lisus, also known as Yobin, are an indigenous people that have lived in and around Vijoynagar since the 1930s — much before the boundaries that created India, Myanmar, and Namdapha were drawn. Like many forest communities, they looked to the forest for food, building materials, fuel for warmth and cooking, and medicine.

Today, the locals of Vijoynagar grow much of their food but have to walk through Namdapha to get to Miao, for access to modern medical care, and rations such as grain, sugar, and oil. This flow of people through the reserve causes disturbance to the park’s more reclusive residents, such as hoolock gibbons and white-bellied herons, both known to be extremely shy and highly endangered.

Will the government create a road connecting Vijoynagar to Miao — a plan that was first proposed in 2013 — or will the locals continue to walk through the reserve? Namdapha offers a sober reminder of the true nature of conservation: a delicate balance of information, resources, awareness, and care for habitats keeping in mind all its inhabitants, human and animal. 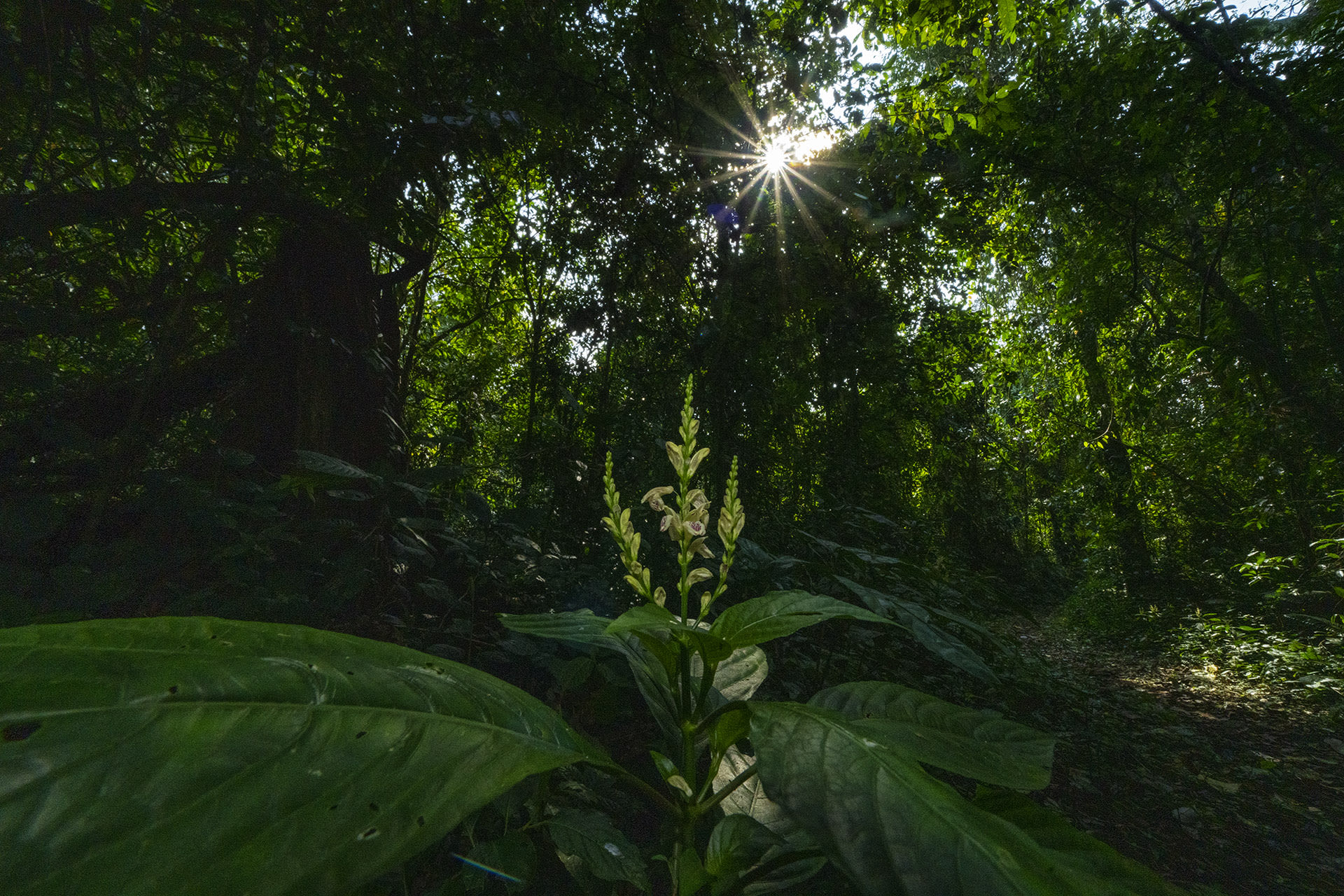 Namdapha National Park is in the Changlang district of Arunachal Pradesh and is bordered by the Eastern Himalayas in the north, and the Patkai Range in the south. The landscape varies in altitude from 200 m to 4,500 m above sea level, creating a range of habitats, from lowland tropical forests (pictured here) to alpine meadows. It is believed to be the only park in the world to have the four big cat species: the tiger (Panthera tigris), leopard (Panthera pardus), snow leopard (Panthera uncia) and clouded leopard (Neofelis nebulosa). 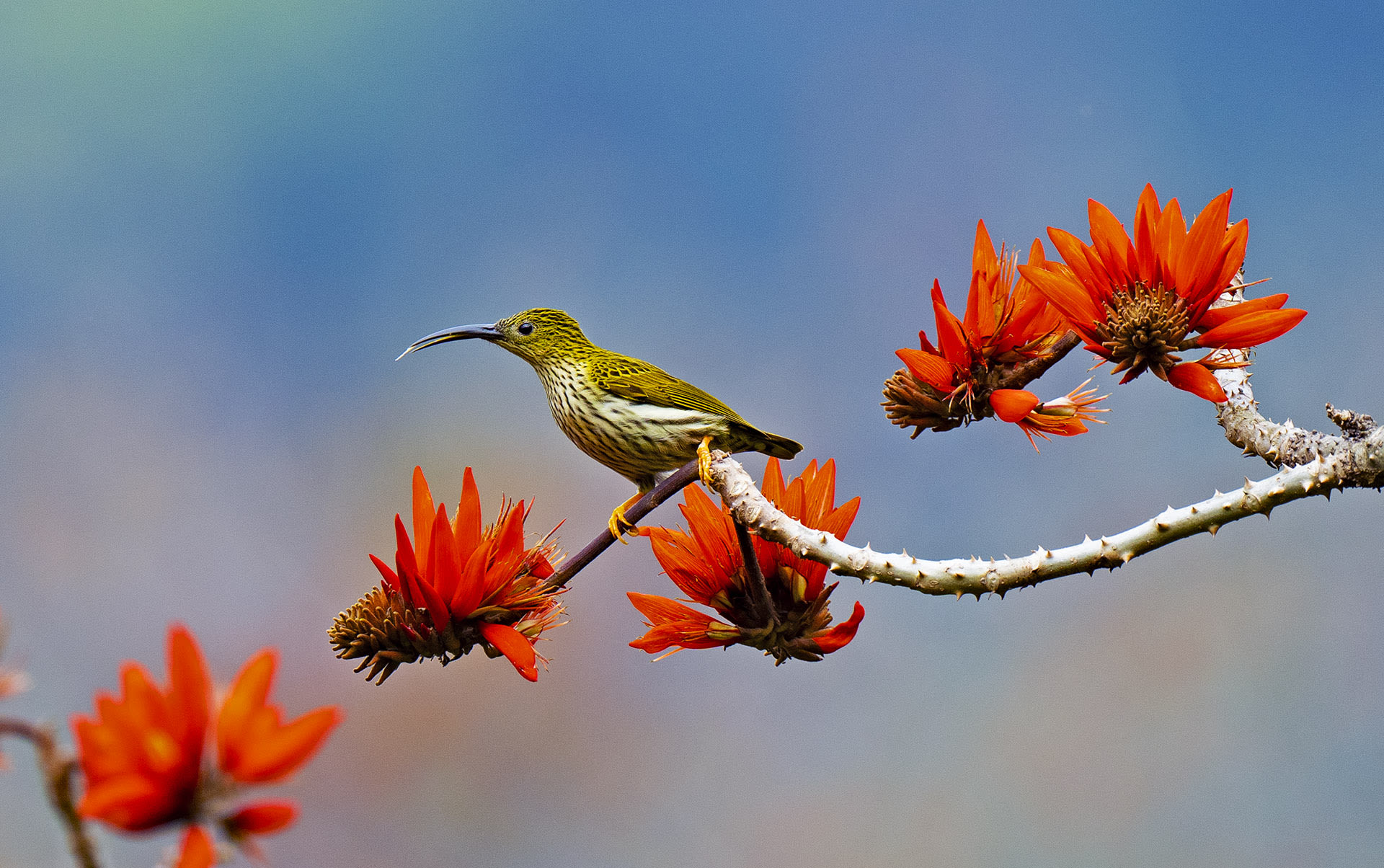 Namdapha has long been a favourite in birding circles. Among the reserve’s smaller residents is the streaked spider hunter (Arachnothera magna), a striking bird with a loud call and love for floral nectar, particularly wild banana flower nectar. Spider hunters are about the size of sparrows and have long, curved beaks that allow them to drink deeply from flowers of all sizes. In Namdapha’s tropical forests they hover around blooms in the morning and evening and fill the air with frequent calls. 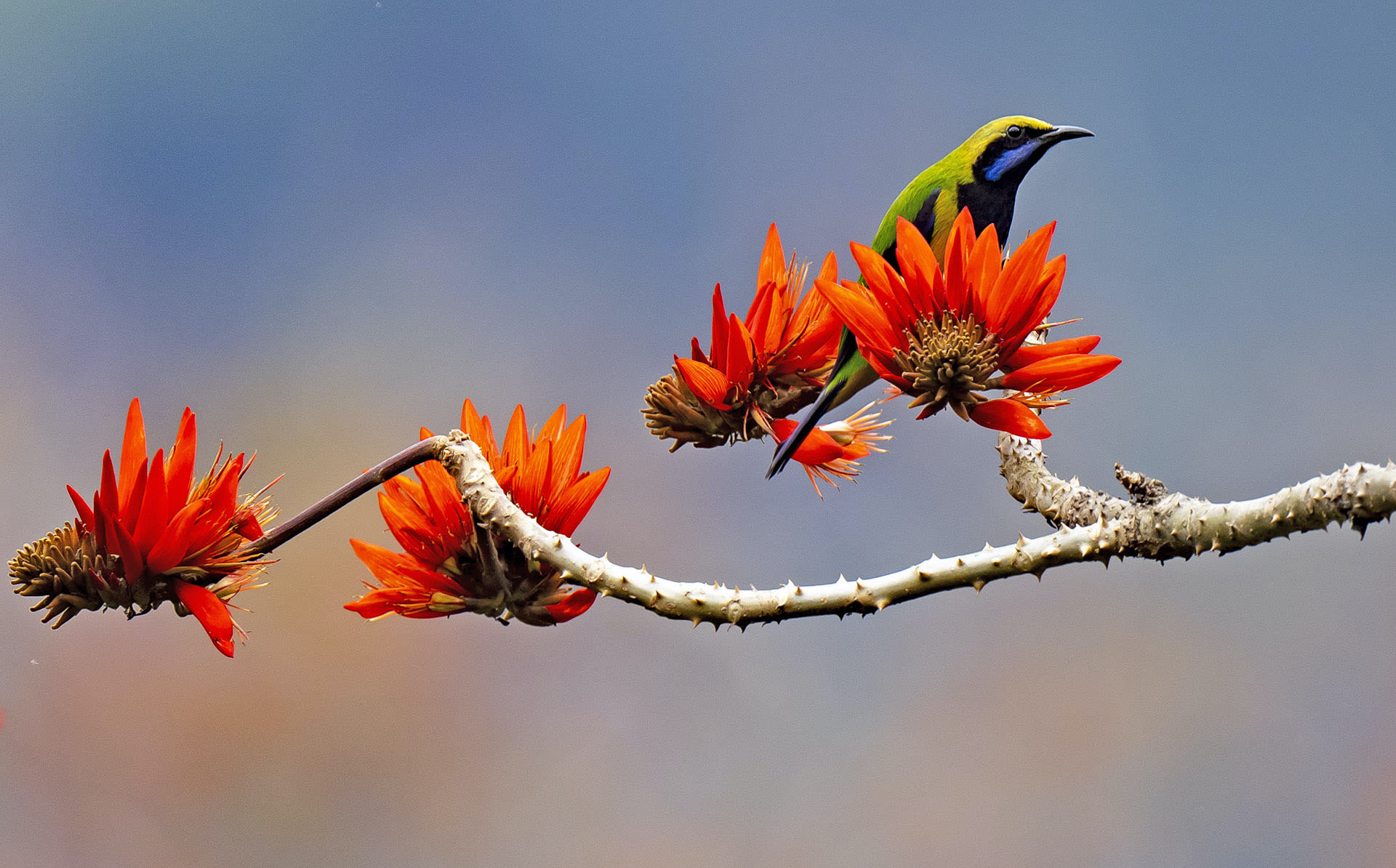 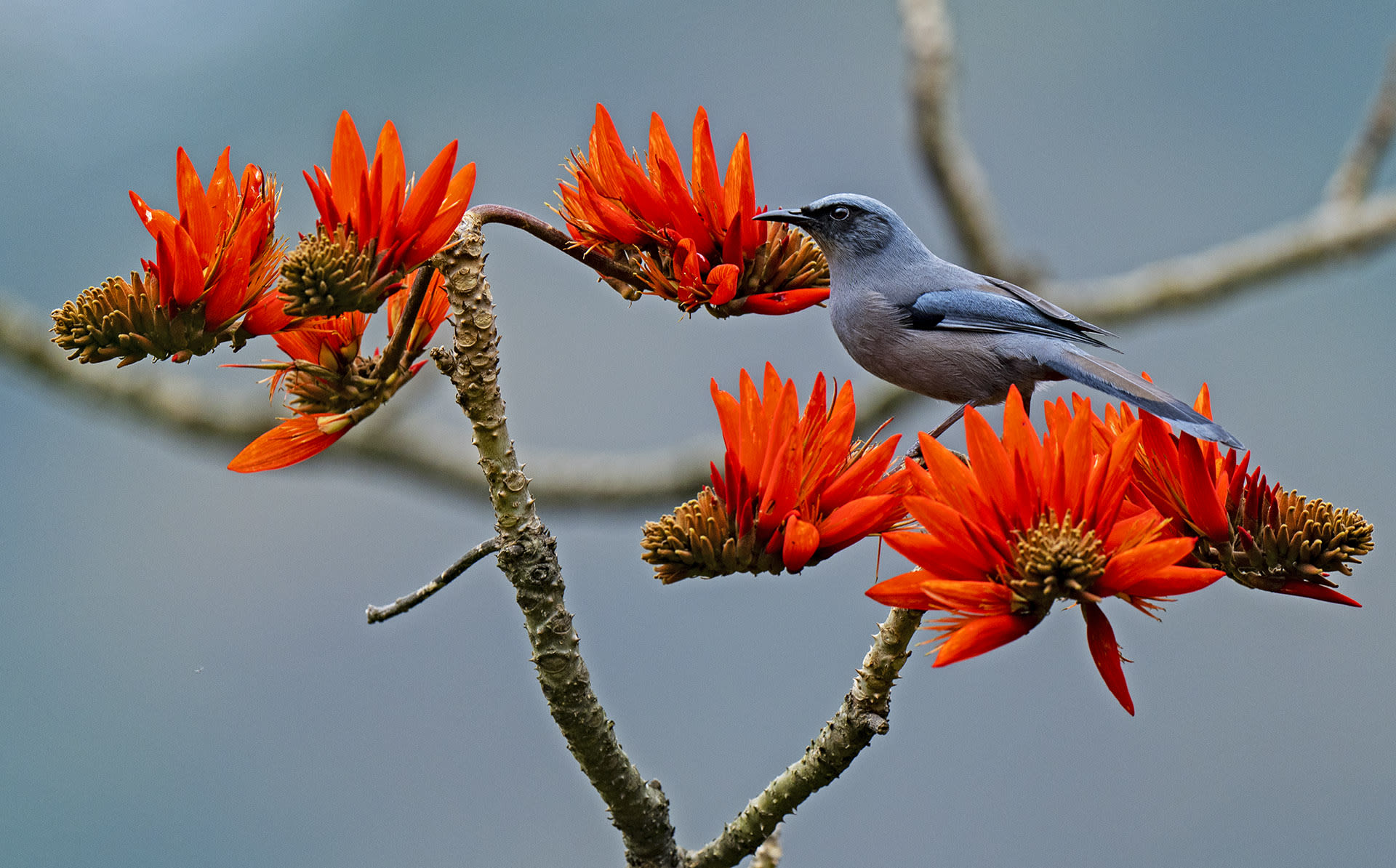 Much of Namdapha’s avian diversity is undocumented due to the rough terrain and absence of roads in the park. There is always a pretty bird in sight, such as this golden-fronted leafbird, Chloropsis aurifrons (left). Leafbirds are common in Namdapha and named after their bright-green plumage which affords camouflage in the dense parts of the forest. Also, fairly common in the canopy, is the black-masked, blue-grey beautiful sibia (Heterophasia pulchella) (right). Sibias are songbirds of the Leiothrichidae family usually found in flocks that twitter and squeak as they forage together. 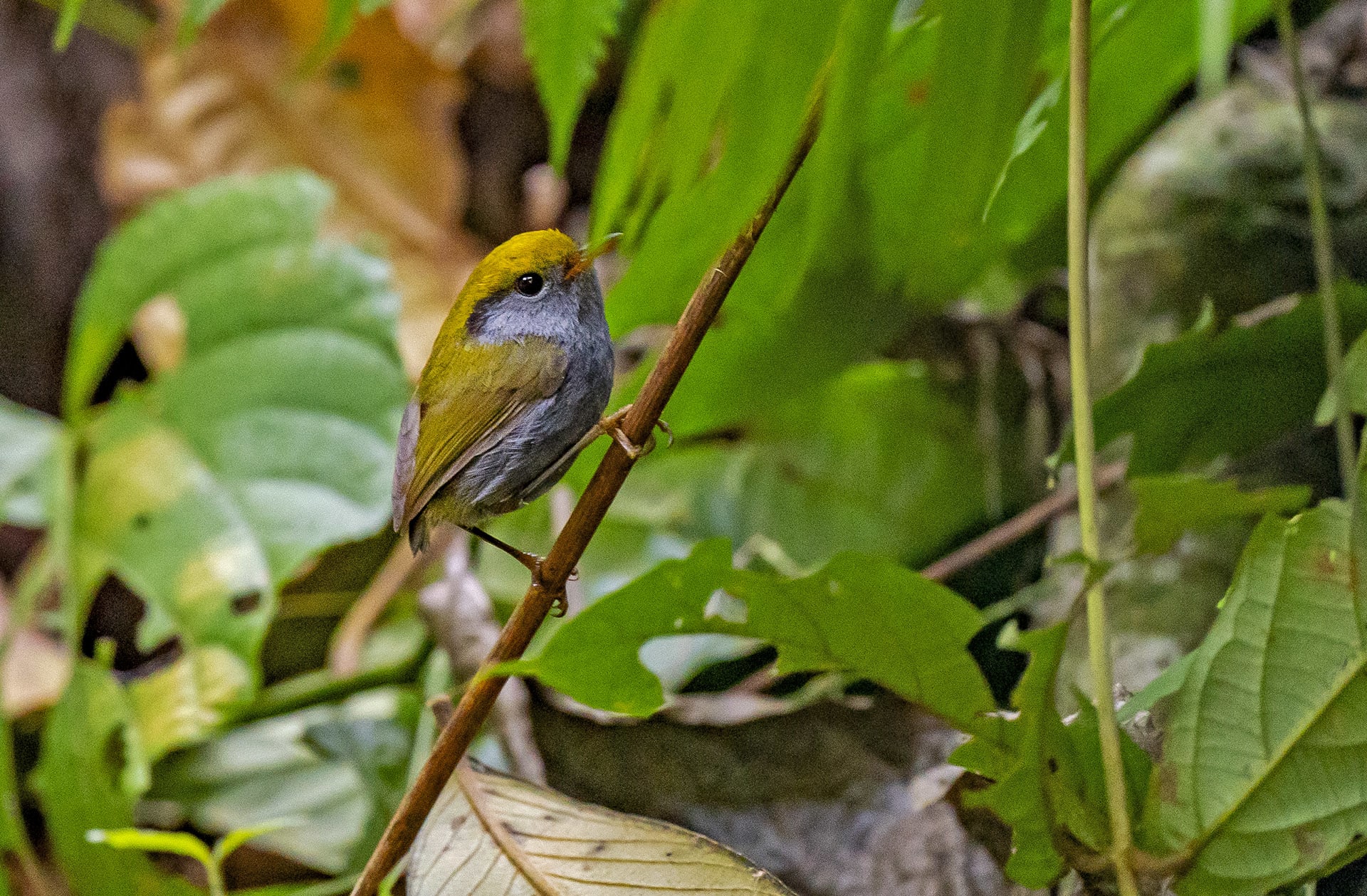 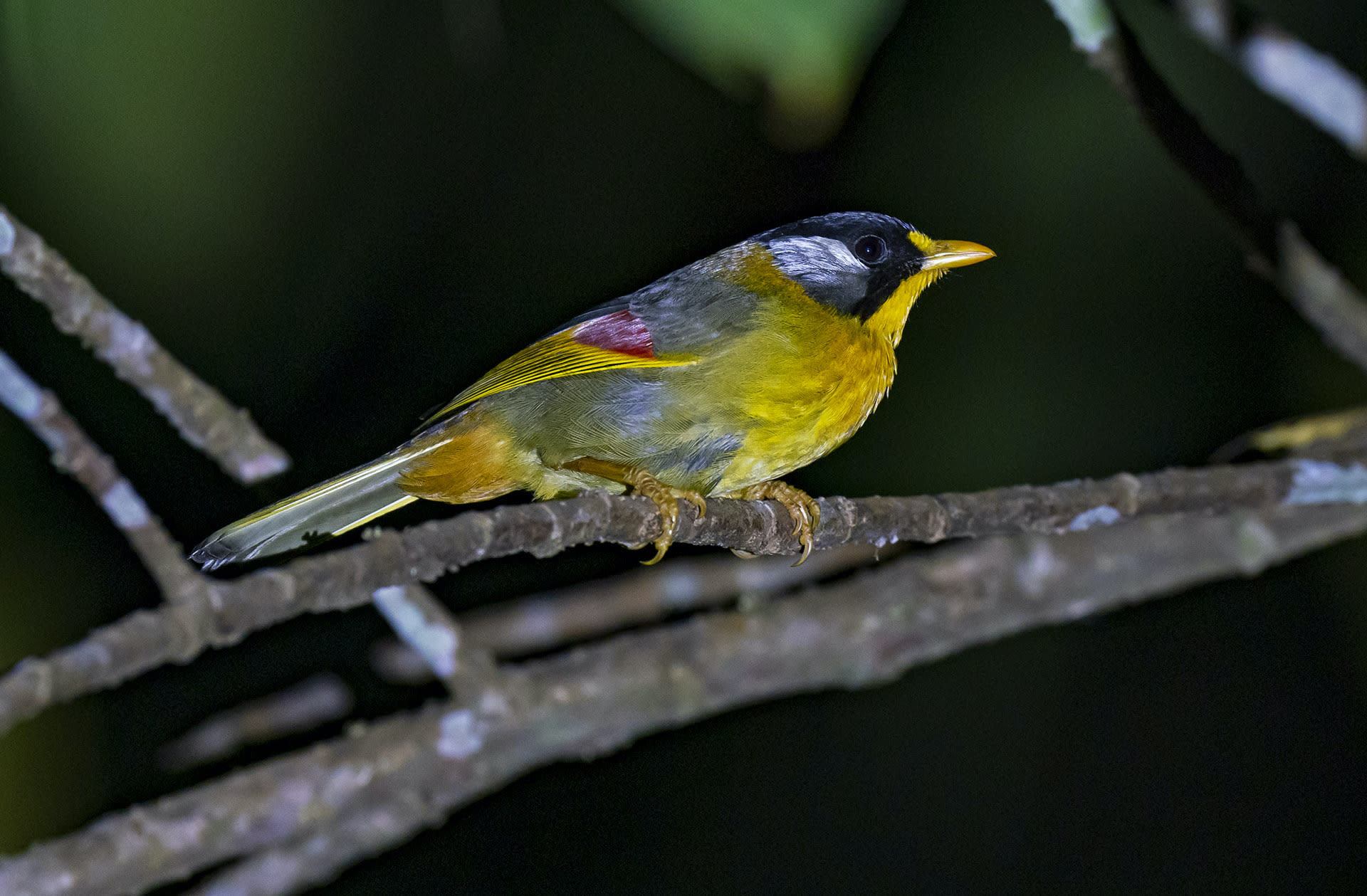 Closer to the forest floor bush birds such as the grey-bellied tesia (Tesia cyaniventer) forage for morsels (left). The citizen science portal eBird describes it as a tiny bird that is long-legged and short-tailed, and moves “rapidly and unseen through dark, dense undergrowth like a pint-sized shadow”. Similarly, the silver-eared mesia (Leiothrix argentauris), also a babbler that roams in flocks, pecks about in the leaf litter though it may also go into the canopy (right).

The forest floor is filled with industrious characters, such as these ants feasting on a pile of faeces. By consuming organic matter such as dung and rotting meat, ants help in the process of decomposition, thereby adding nutrition to the soil and supporting the trees, ferns, and mosses that thrive in this ecosystem. 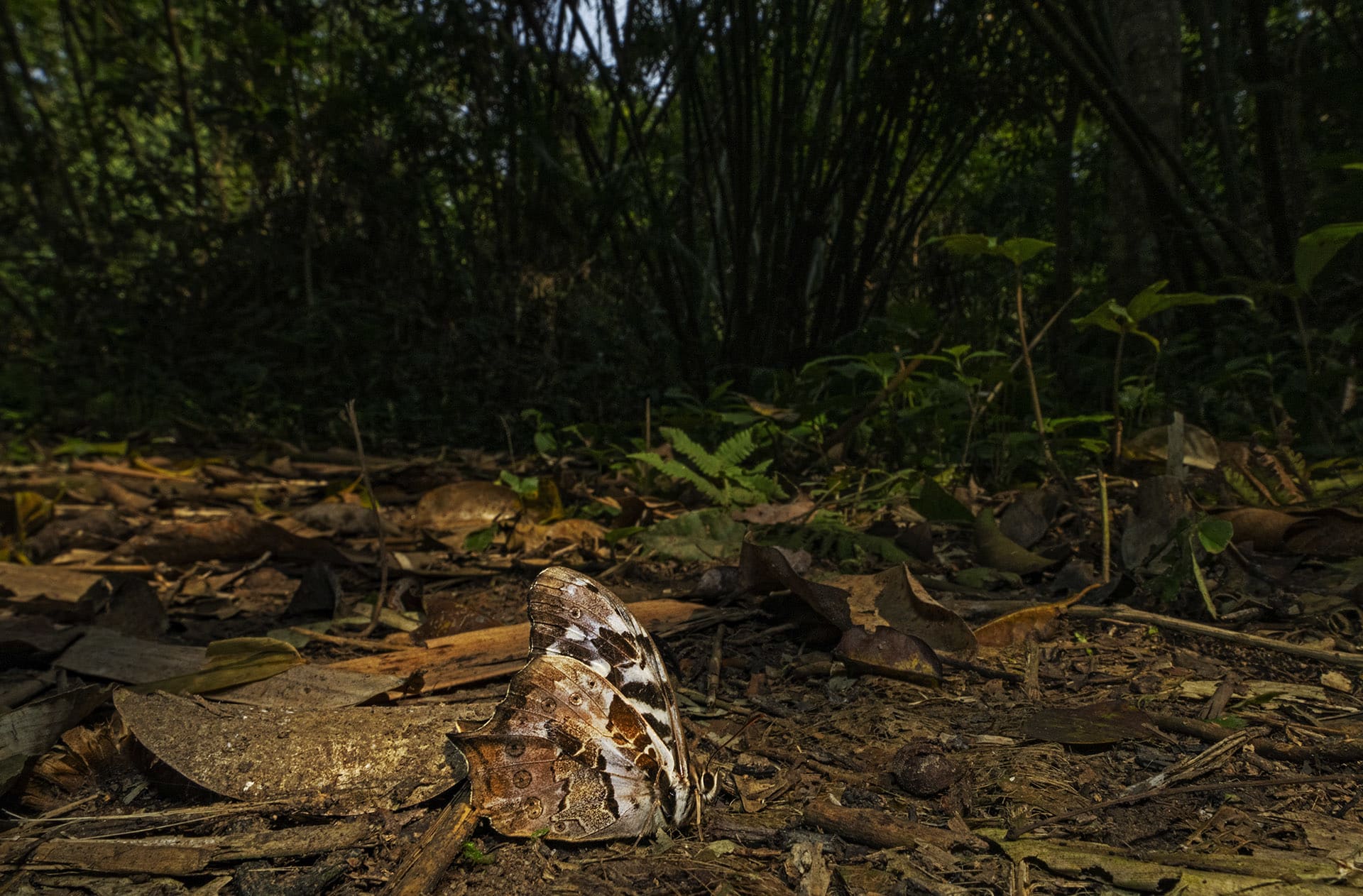 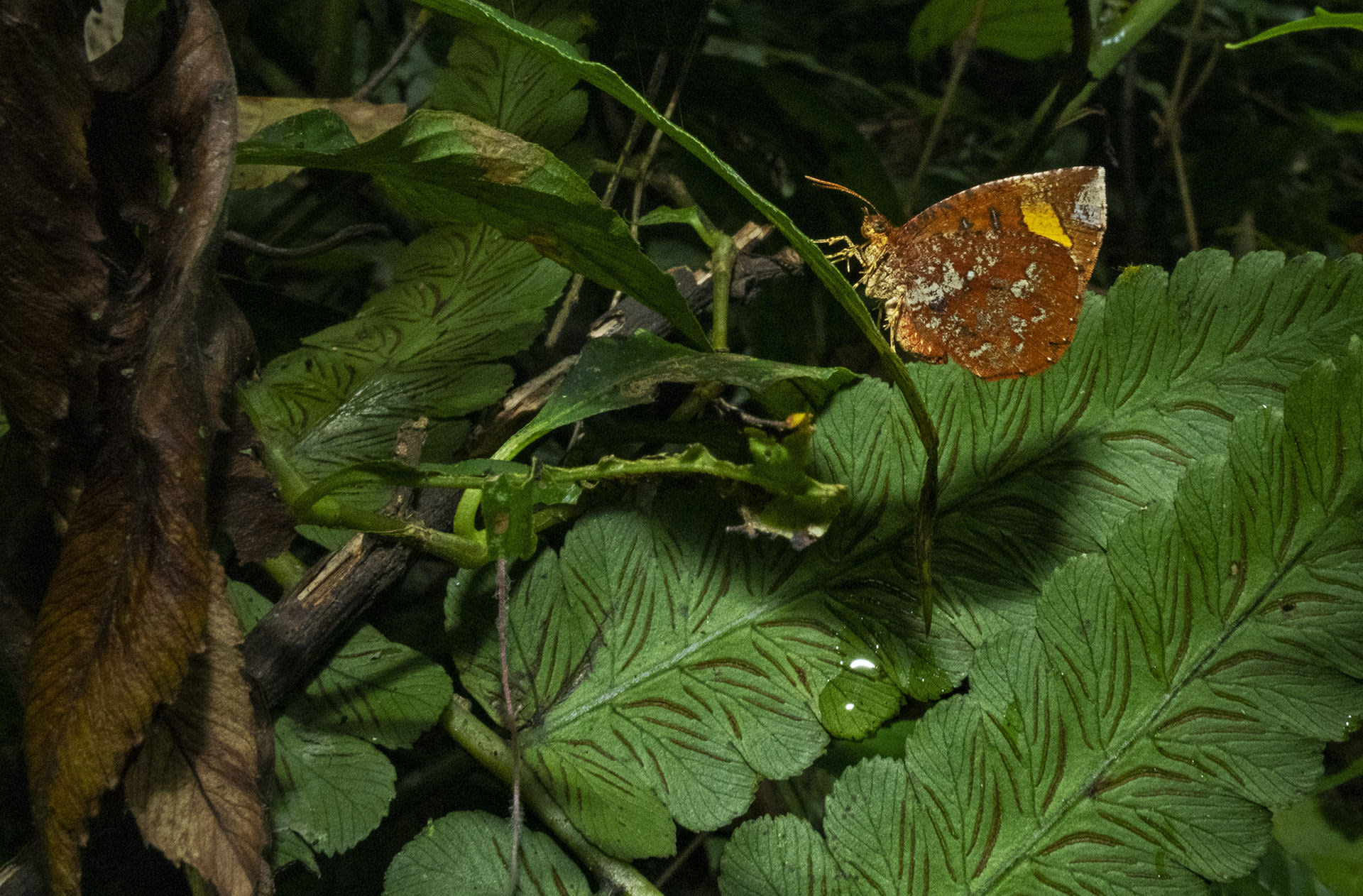 This diversity of flora supports a wealth of insect life, including over 150 species of butterflies and moths. Among them, is the vividly coloured false tiger moth (Dysphania militaris) (top), a species that is active during the day, unlike most moths that are nocturnal. (Above left) The tailed labyrinth butterfly (Neope bhadra) also inhabits this forest but can be hard to spot on account of its camouflaged wings that look like leaf litter. (Above right) The butterfly-moth (Callidula attenuate), as its name suggests, is an unusual specimen because though it is a moth it looks like and possesses “butterfly-like” characteristics from its colouration, to being active during the day, and its larvae exhibiting leaf-rolling behaviour. 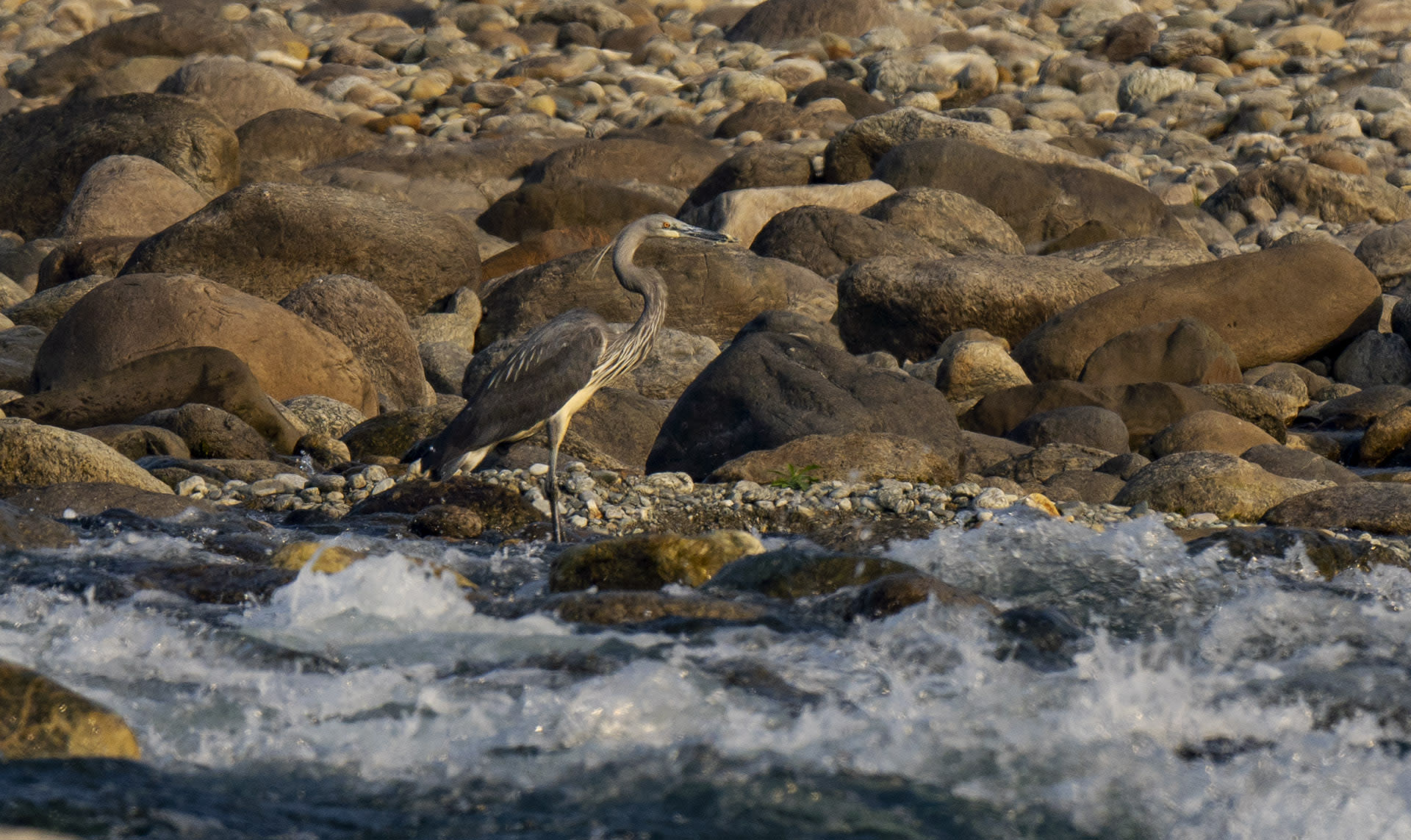 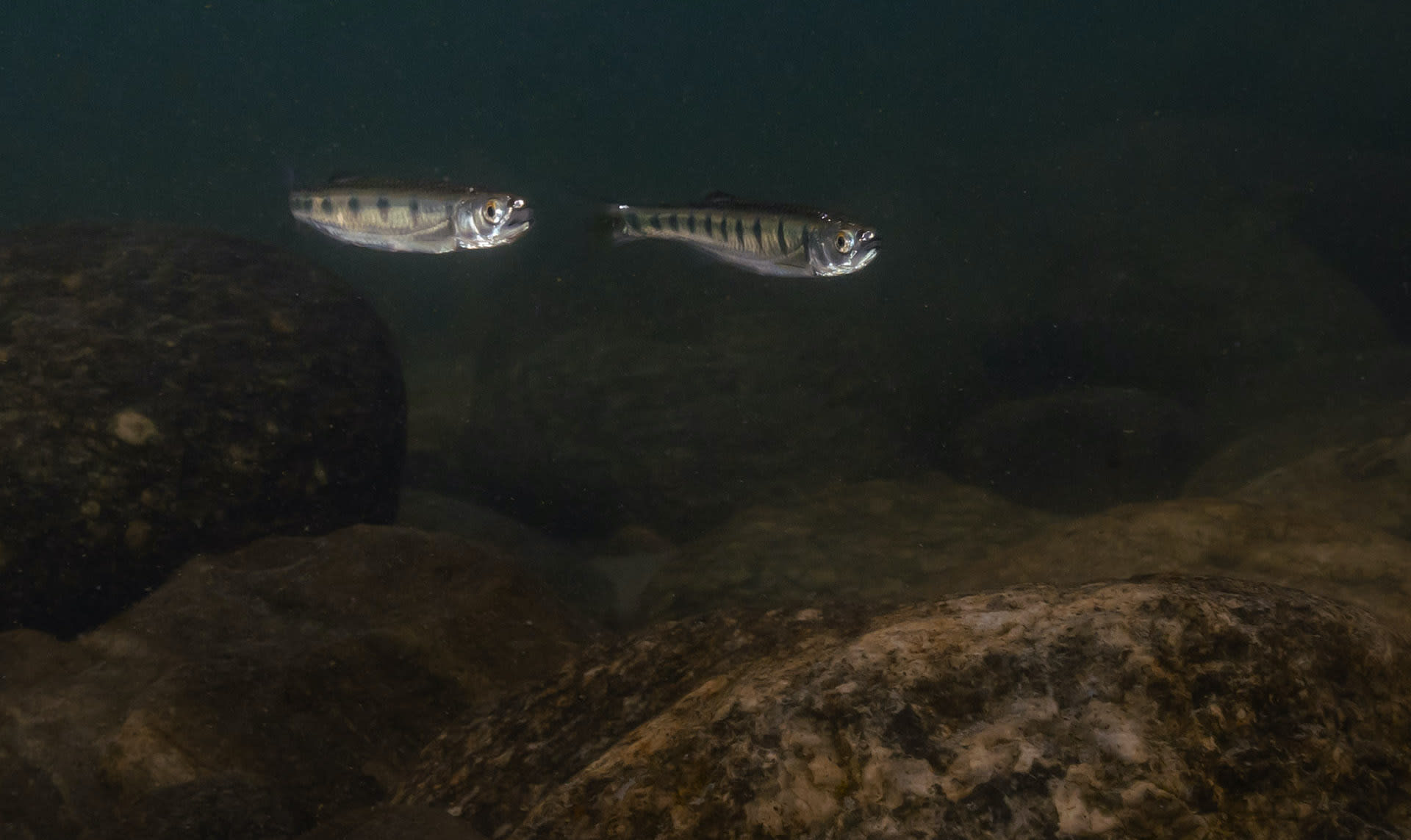 Along the banks of the Namdapha and Noa-Dehing rivers, small populations of white-bellied herons (Ardea insignis) hunt for fish in the morning and evening hours, standing like sentinels amidst the thrashing water. The reclusive birds are extremely suspicious of and easily disturbed by human presence.

In the absence of any infrastructure, locals from Vijoynagar either walk or use the river to transport goods to Miao. Sometimes, they build rafts from bamboo that grows abundantly in the area and move along the boulder-strewn riverbank until they arrive at their destination. In 2013, the government proposed plans for a two-lane road connecting Vijoynagar with Miao, but the project did not progress, “as ecologists flagged the road as a bad idea for Namdapha, which is a meeting point of Himalayan, Indo-Burmese, and Indo-Chinese flora and fauna,” according to a report by journalist Rahul Karmakar in the The Hindu.

This conundrum is familiar to conservationists. On one hand, halting the road construction would mean less interference to the habitat — less clearance of trees, erosion of soil, destruction of the forest canopy — which is a good thing. But a road also provides the opportunity to control the flow of people through this fragile ecosystem. According to Guwahati-based wildlife biologist Firoz Ahmed, the road is a necessary evil for Namdapha. “Without it, people carrying commodities on their heads or on elephant back have been taking a shorter route along the fragile banks of the Noadihing [sic],” he is quoted in The Hindu. “This has led to disturbance of the river ecosystem, which is crucial for the park.” 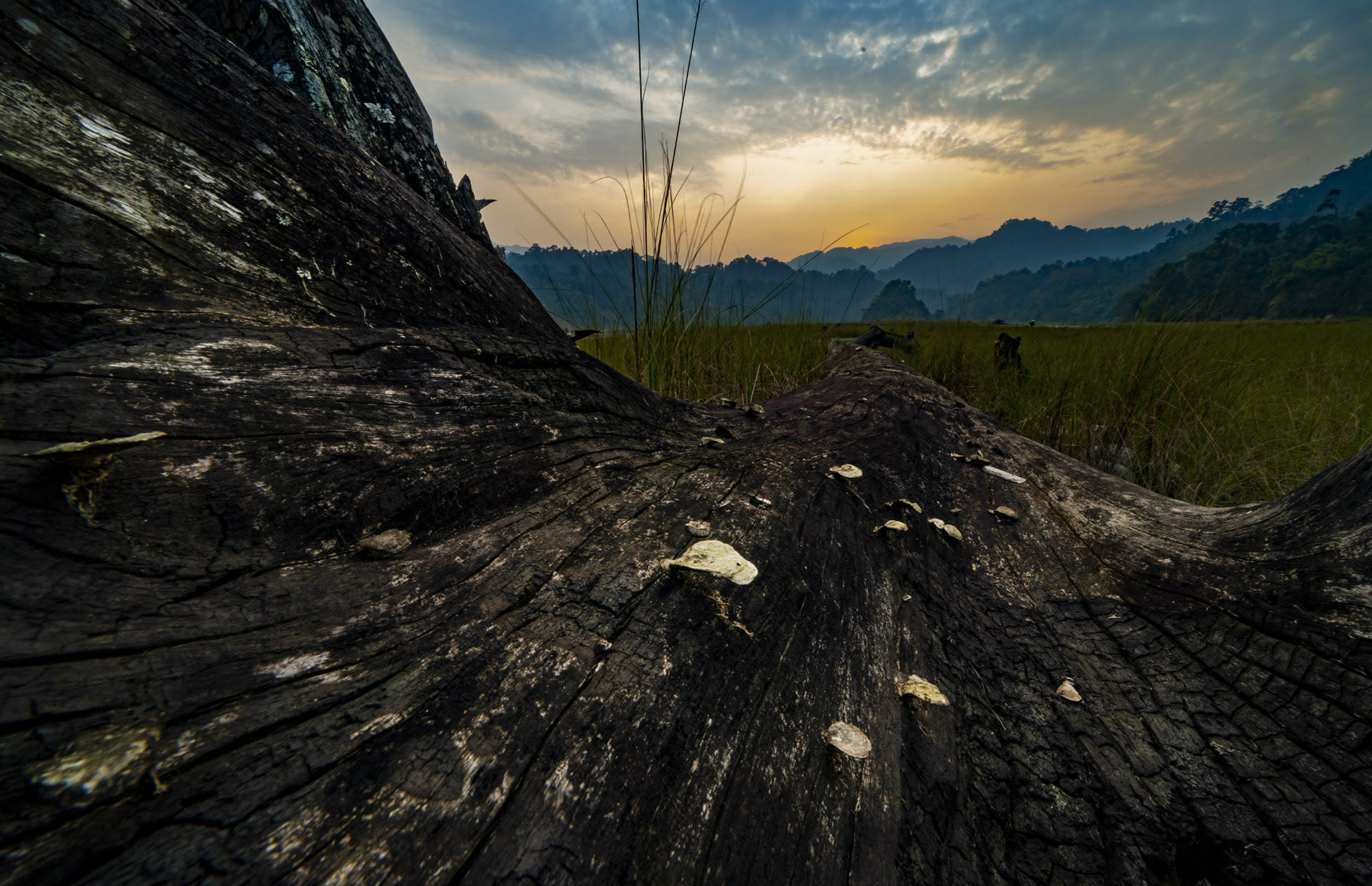 In April 2020, the forest department announced that a shorter road would be built, to reduce the impact on Namdapha’s arboreal inhabitants. For all practical purposes, however, construction remains in limbo. For now, hoolock gibbons and Malayan squirrels still inhabit the forest canopy, white-bellied herons continue to hunt for fish, and humans walk the banks of the Noa-Dehing River.