There are just about 1,000 Narcondam hornbills on the planet — and they all live on a tiny island, less than seven square kilometres in size

Oceanic islands like the Andaman and Nicobar Islands bring to mind turquoise waters, and marine life like anemones and sea turtles, and mangroves with their roots akimbo. Those who have visited this Indian Ocean archipelago might conjure memories of sunset swims, sand flies, long cycle rides, local fish curry-rice, and coconut water. Little is known about the islands’ canopy, which shelters a wealth of bird life: swifts, cuckoos, pigeons, mynahs, and even hornbills. The rarest avian resident of the Andaman Islands is the Narcondam hornbill (Rhyticeros narcondami). About 1,000 of this endangered species live exclusively on the 6.82-sq-km island of Narcondam, the easternmost and most remote island of India. The closest landmass is over 100 km away. It was entirely uninhabited by humans until 1969 when the Indian government set up a police check-post there for defence reasons. Even today, the island’s human population is a rotating roster of 20 policemen, each of whom spend a month there. Narcondam is off-limits for travellers and civilians, and the only way to visit the island is for research with prior permission from the police.

Getting to the island is an adventure in and of itself, says wildlife photographer Dhritiman Mukherjee who visited it in March 2013: “After a long boat ride from North Andaman Island, we were transferred into an inflatable boat to approach the island. There is no jetty, only a rocky beach.” Inaccessibility is one of the reasons Narcondam has remained relatively untouched. The island has a thriving jungle habitat with sprawling fig trees, towering dipterocarps, a variety of birds, plus geckos, monitor lizards, and flying foxes.

(Watch a video of Dhritiman Mukherjee speak about his experience of photographing the rare bird here.)

Narcondam has a dormant volcano, with a peak that is almost always crowned by clouds. “Approaching, one sees a thick, evergreen forest, with very good cover,” says Dr Shirish Manchi from the Salim Ali Centre for Ornithology, who visited the habitat in 2012 and 2013 for a short-term study. “There are generally some clouds above the island, and the water has a lot of sharks.”

The island is blanketed in green. The beach is covered with Ipomoea creepers with their signature violet flowers, but further in, the flora gets denser and taller, and the chatter of hornbills can be heard. The distance from the forest to the shore is less than 50 metres, and yet, “I have never seen the hornbills venture out of the canopy,” says Dr Manchi, “Likely because of its isolated location.” 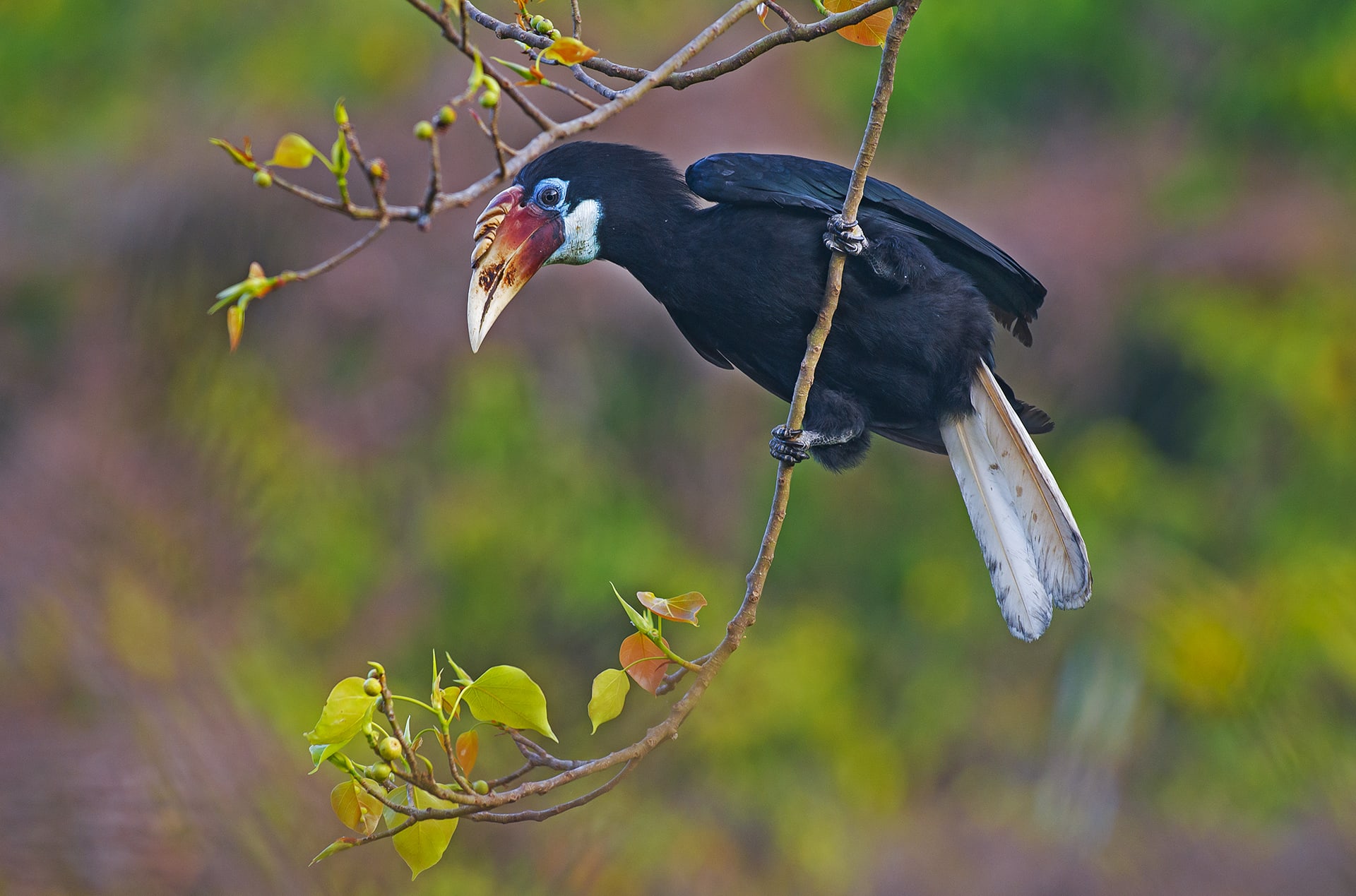 India has nine species of hornbill, most of which face the threat of hunting and habitat loss. They mostly inhabit old-growth forests with high canopies, and steer clear of areas of human habitation. In contrast, “the hornbills of Narcondam Island were quite comfortable with human presence,” says Dhritiman Mukherjee, “and some of their nesting sites that were less than two metres from the ground.” 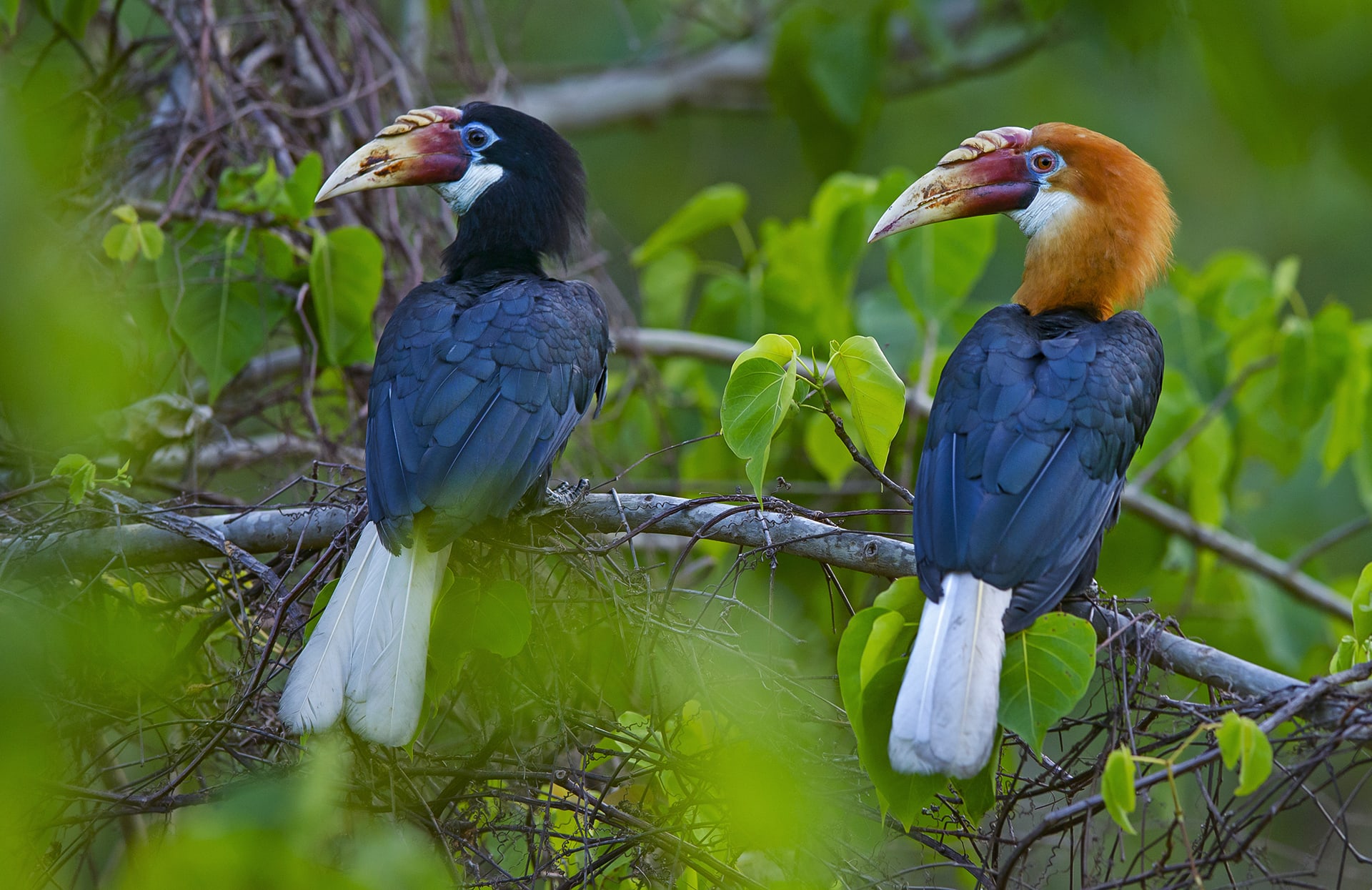 Males and females of the species are distinct from each other. Males have rufous plumage on their head and neck, while females have blackish feathers. Both sexes have white tails, white throat patches, and similarly coloured beaks. Narcondam hornbills are monogamous, though we do not know if they are “seasonally monogamous” or “lifetime monogamous” (like most other hornbill species). “So far, we have only short-term research to rely on, for information,” says Dr Manchi, “so we cannot say for sure.”

The first thing photographer Dhritiman Mukherjee did upon his arrival on Narcondam was to recce the island and identify the feeding and nesting trees of the hornbills. “There was a fig tree that they would visit every day,” but since fig trees are quite large, photographing the birds required a little preparation. The solution: rigging himself up the tree using a pulley so he could reach the same height as the hornbills. “After I climbed to the top of the feeding tree, I stayed there almost the entire day,” he says.

Hornbills are frugivores for most of the year, except during breeding and chick-rearing season, when they feed on insects for higher protein intake. Their food preferences have changed over the years, says Dr Manchi. “Earlier, species such as Canarium euphyllum and Anglaia andamanica were not recorded as a food sources, but my research showed it was a dominant part of their diet.”

Narcondam hornbills breed between February and May, and aerial displays are a large part of the courtship at the start of the season. At this time of year, the birds can be seen flying high in the sky, often with fruit. Food is central to the courtship ritual of these hornbills, presumably because of their unusual nesting behaviour. 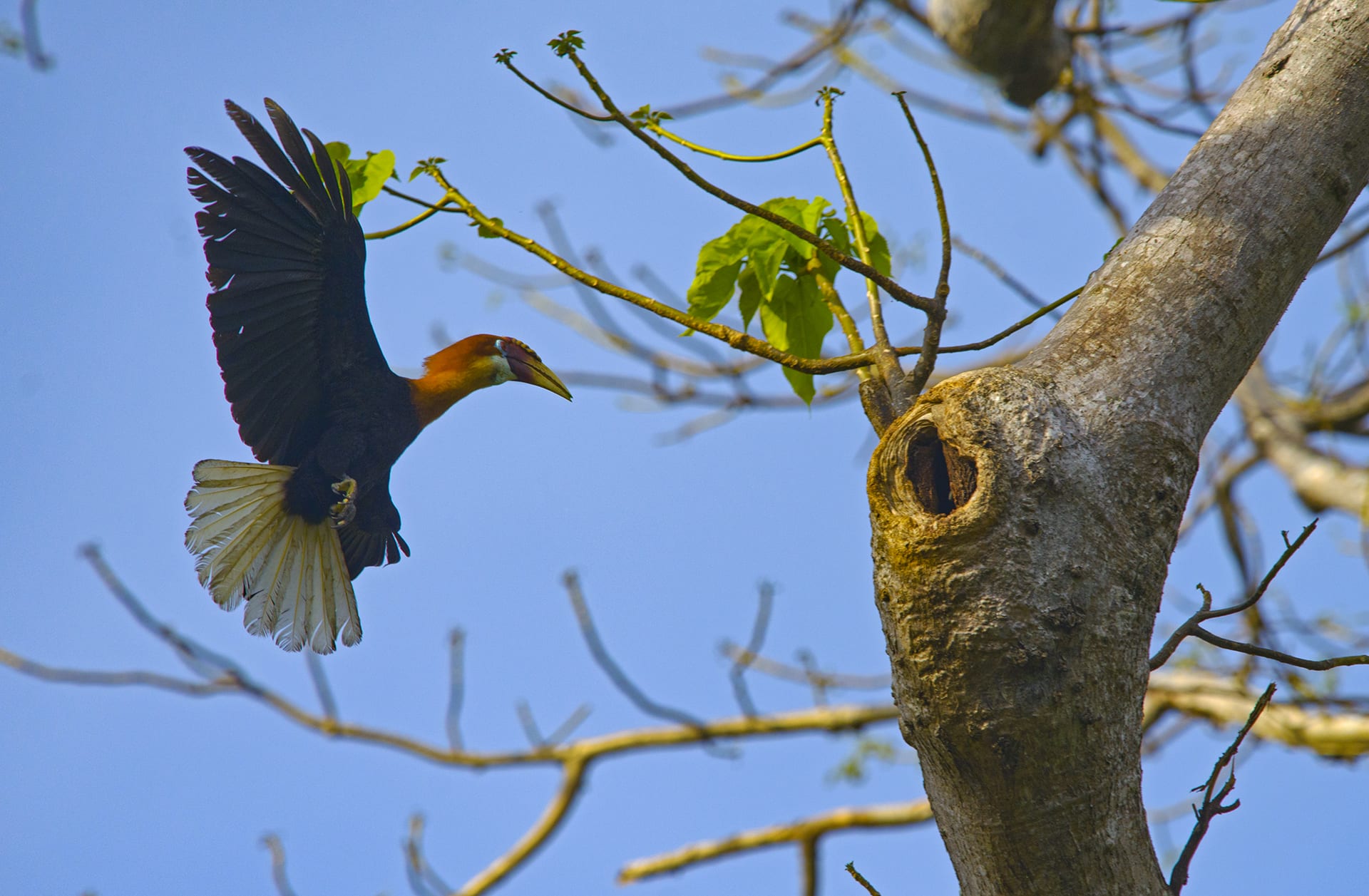 When the breeding is complete, the female hornbill seals herself in tree cavity using a mix of soil and faeces, with only a crack to receive food from her mate. She stays in her nest with her eggs until the chicks hatch and are ready for the outside world. Other species of hornbill are known to return to the same nest year after year to raise their young, but we do not know if this holds true for the Narcondam hornbill. 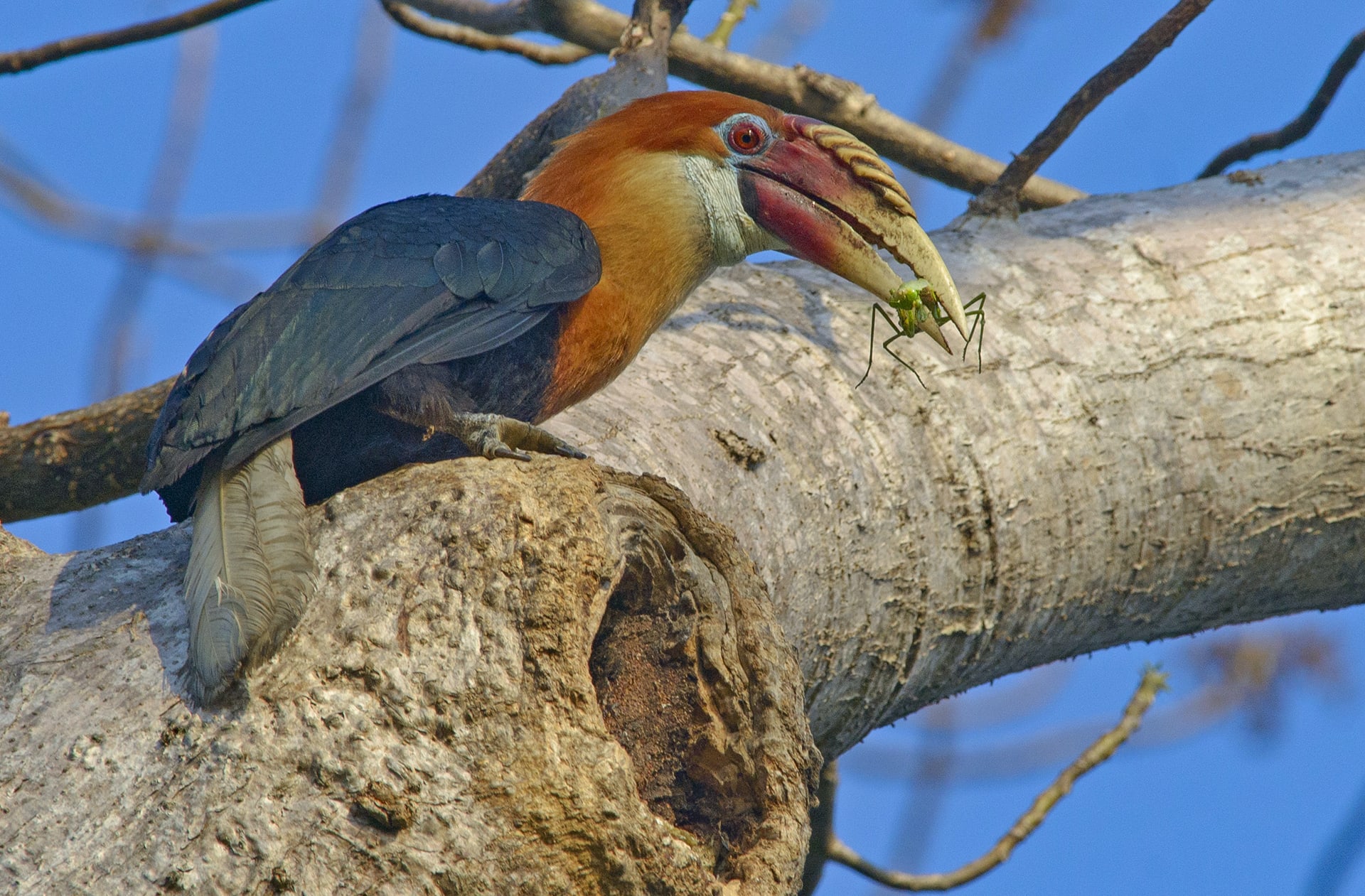 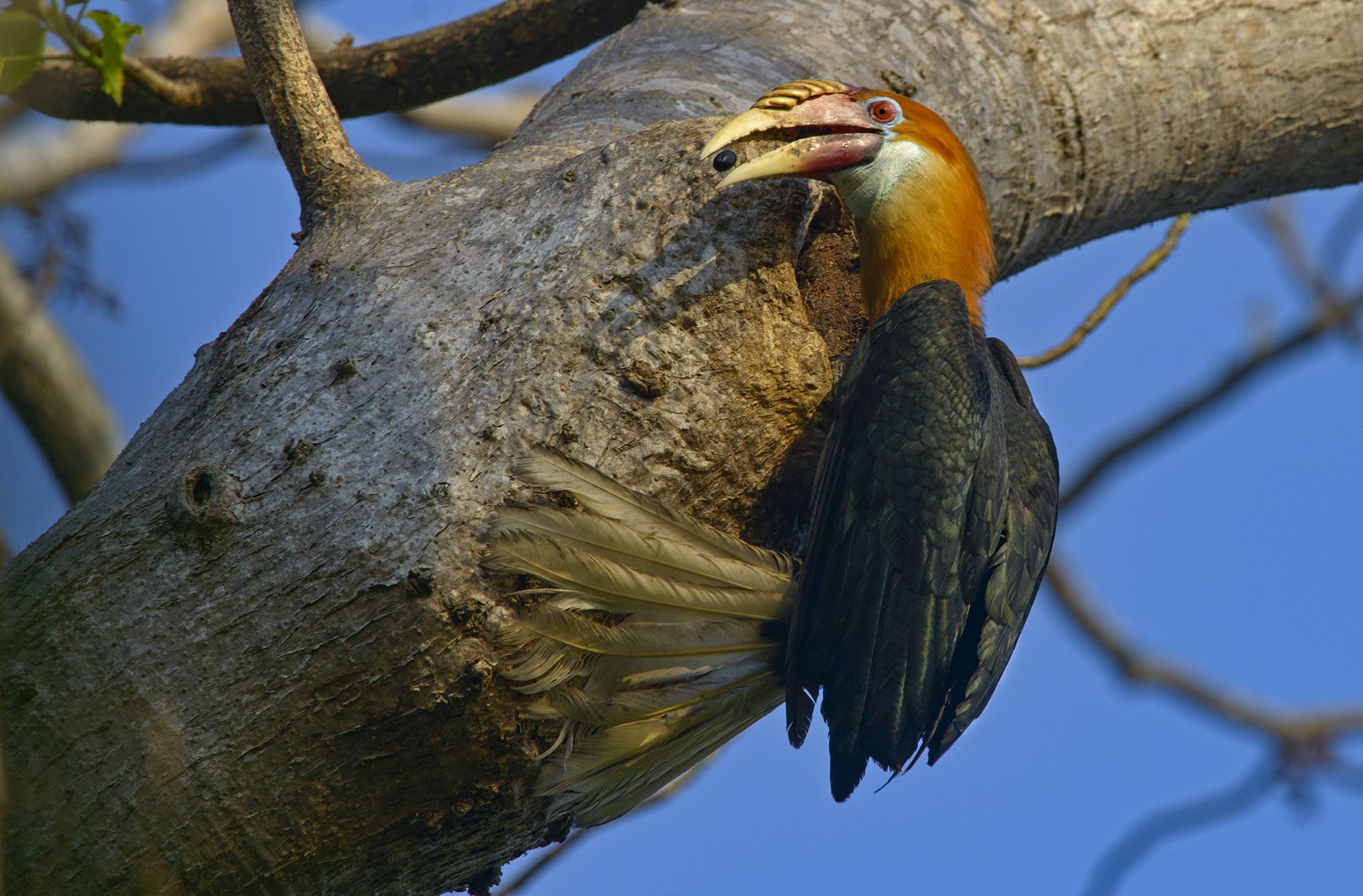 Male hornbills are dedicated partners that spend most of the nesting season feverishly foraging for food to feed their mates. Most often their offerings include berries and fruit like wild figs, though insects and small reptiles occasionally make an appearance on the menu. Female hornbills shed their flight feathers at this time, according to the IUCN, and are incapable of flight.

Photographing the nesting hornbills was another experiment. “I didn’t want to disturb the birds by climbing the tree,” explains Dhritiman, “so I climbed the neighbouring tree with a rope and photographed them from there.” Watching the nesting birds was a rare opportunity, he says, especially at such close quarters. “I saw the males bring as many as 70 fruit in one go, by stuffing his gullet with berries, and 45 minutes later, he would return with 12-15 grasshoppers.”

The age of a hornbill can be determined by the ridges on its beak. This bird, for instance is five years old. “We know for sure that they live at least nine-ten years, because we have seen the markings on the casque,” says Dr Manchi, “but we cannot say for certain what the life span of the species is until prolonged studies are conducted”. 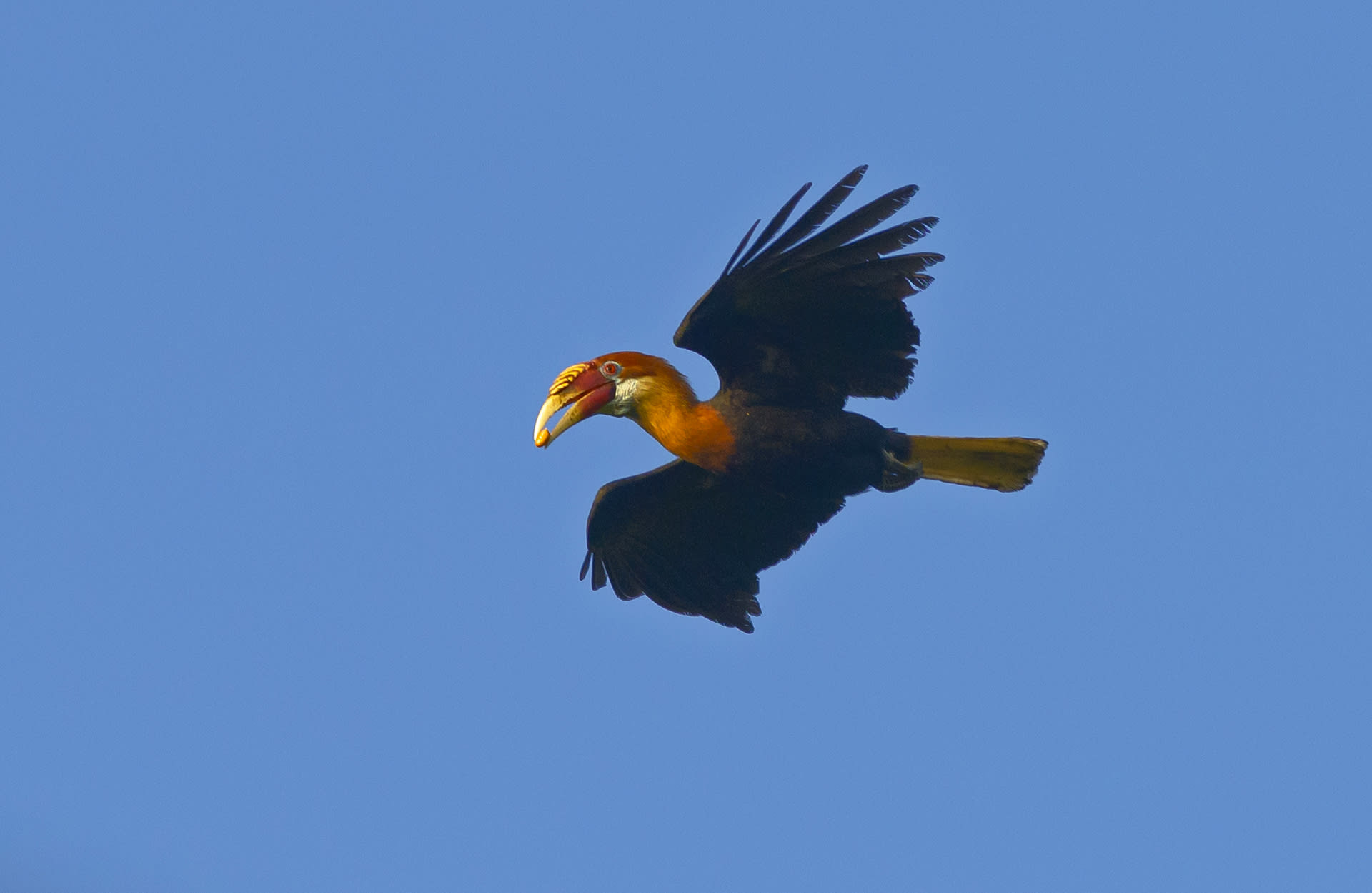 How these hornbills arrived on Narcondam remains a mystery. “Maybe the birds were being transported by human beings on a ship, and got stuck on the island due to geological events,” says Dr Manchi, “or maybe some birds flew here from Burma, and got stuck on the island. Examining human migration patterns might shed some light, but the only concrete way of learning about the species’ past is by doing a genetic study.”

Studying the genetics of the population is important for two reasons, says Dr Manchi. First, to ensure genetic variation, which is crucial to the survival of the species, “otherwise, a single epidemic can wipe them out.” And second, because “genetic studies might yield light on the origins of the birds, and give us some clues about how they arrived on the island.” For now, the Narcondam hornbills remain an enigma: an endemic species, exiled on a tiny island surrounded by miles and miles of ocean.

Watch how Dhritiman Mukherjee photographed the canopy-dwelling endemic bird, from atop a 40-foot tall tree.