You need to trek to the top of a mountain in the Democratic Republic of Congo’s Virunga Mountains, before this latticed pie of smouldering lava comes into view

As the sun begins to set, the plume of acidic mist and smoke dissipates. It reveals cracks and fissures in the cauldron of red, boiling lava that is the Nyiragongo volcano. The smoke and fumes persist throughout the day, but when night descends and ambient light disappears, Mount Nyiragongo offers a different sight. It’s a spine-tingling feeling to be standing on the edge of this volcano in the Democratic Republic of Congo (DRC) in Central Africa. This war-torn country has only in the last few years started permitting visitors like me to hike into the Virunga Mountains to visit volatile Nyiragongo, believed to hold the world’s largest lava lake.

The bubbling lava is not only at the centre of the volcano, it also emerges on occasion from fissures in the sides of the mountain. For the moment, though, Nyiragongo seems content to smoulder and bristle within its bounds. Scientists in Goma, the nearest city, monitor the volcano 24/7 for changes in heat or seismic activity. The city’s population of one million people live under the constant threat, but are determined not to let a sudden eruption catch them by surprise.

Nyiragongo is considered one of the most dangerous places on earth, both because of the unpredictability of volcanic activity, and the threat from militia activity. It is nevertheless stunning enough to make me brave the odds to come here, trek up the mountain, and camp on its ridge overnight.

The gateway to Nyiragongo is the city of Goma, capital of the North Kivu province in the eastern part of the DRC. Before we begin our trek, I look up at the mountain we are about to climb. In the early dawn hours there is already a thick mist crowning the top. The guide points out our route; we will ascend from the left slope. 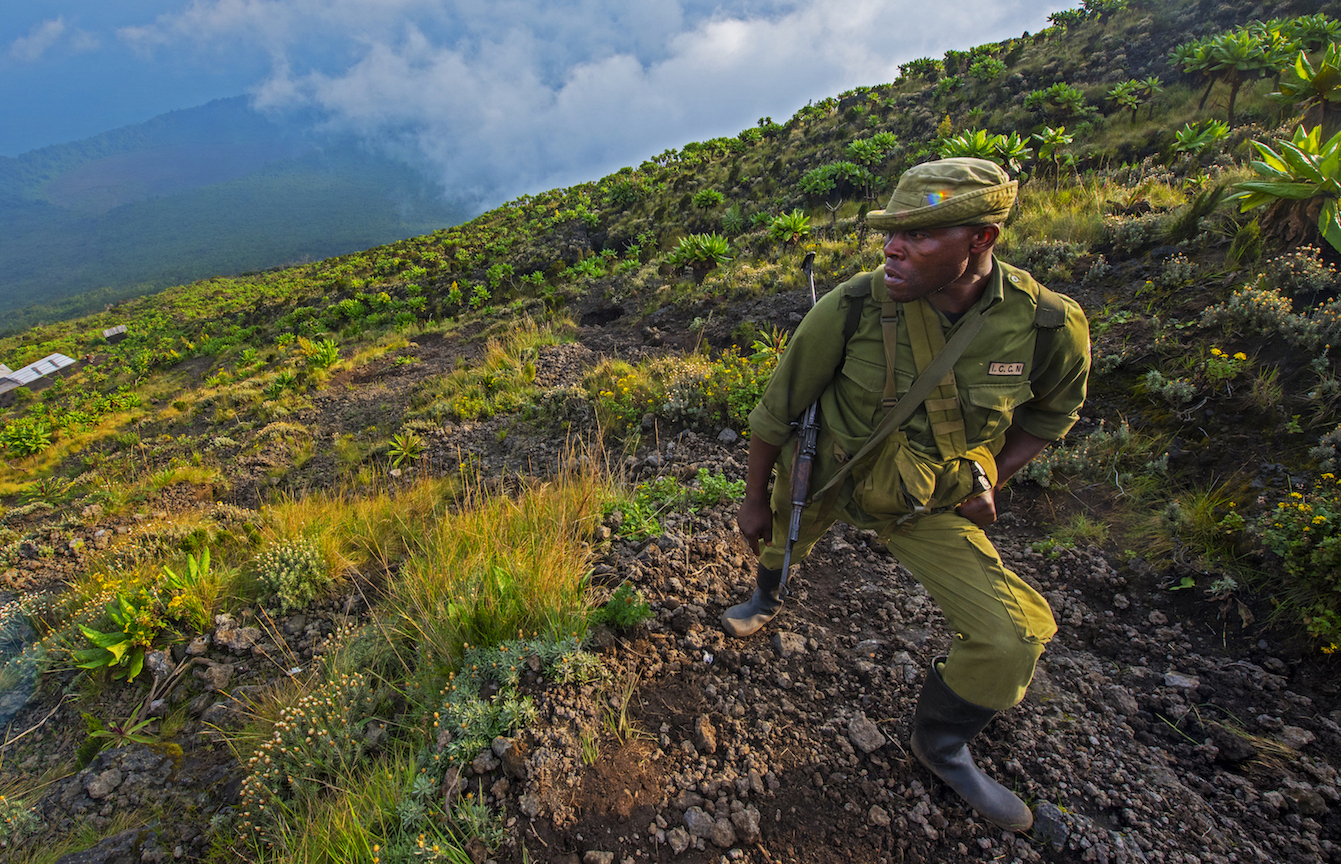 It’s a long, steep climb up the mountain. Luckily, we are accompanied by forest rangers who know the route and area well. This is no easy walk: we ascend 1,500 metres (5,000 feet) in six hours to reach the summit at an elevation of 3,462 metres (11,358 ft). The last one hour is over a treacherously steep path, on a mass of uneven volcanic rock and rubble, and we stop repeatedly to catch our breath. At one point I distinctly hear chimpanzees call, but I don’t see them.

On our way up through the forested part of the hill slope, I spot this Johnston’s chameleon, the male easily identifiable by the three horns on its head. This charming lizard provides us a much-needed distraction from the arduous climb. The full-grown adult is about a foot long, and seems happy to display its magnificent tail and unique feet that make tree climbing a breeze. This species prefers higher altitudes and is endemic to the region’s forests, where there are plenty of insects to feed on.

We reach the top to see a kilometre-wide crater. Smoke and acidic haze billow out of the central lava lake, almost obscuring it from view. We are perched on a ridge; on one side lies the slope we have just climbed, and on the other side, a steep vertical drop into a hissing, scorching sphere. A few huts on top of the ridge are the only shelter. 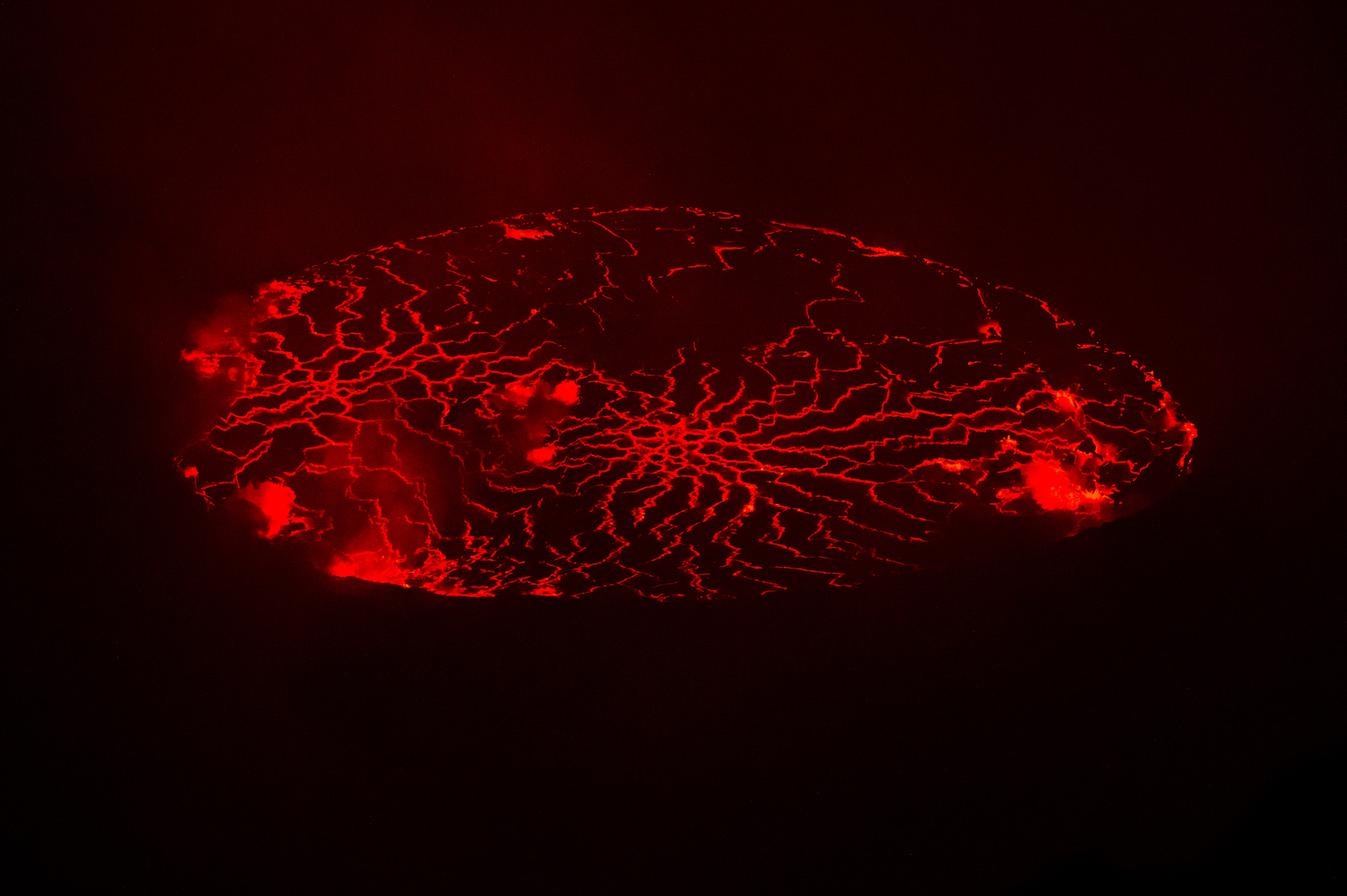 As night falls, Nyiragongo reveals its true colours. I set up my photographic equipment for an all-night vigil of the volcano. The best way to see it is in the dark, when the glowing red molten lava, and the cracks and fissures stand out.

Inside the caldera temperatures soar to an unimaginable 980 degrees C. This active volcano has erupted about 34 times since 1882. On a daily basis it continues to spew lava, but mostly spattering a maximum of 20-30 metres high.

As the fiery lava casts a red glow on the ridge, the lights of the city of Goma appear in the distance, just 15 kilometres away. Goma has been affected by its simmering neighbour many times. In 2002, when Nyiragongo last erupted, its lava swooped down over a third of the city, causing major destruction and killing 147 people. 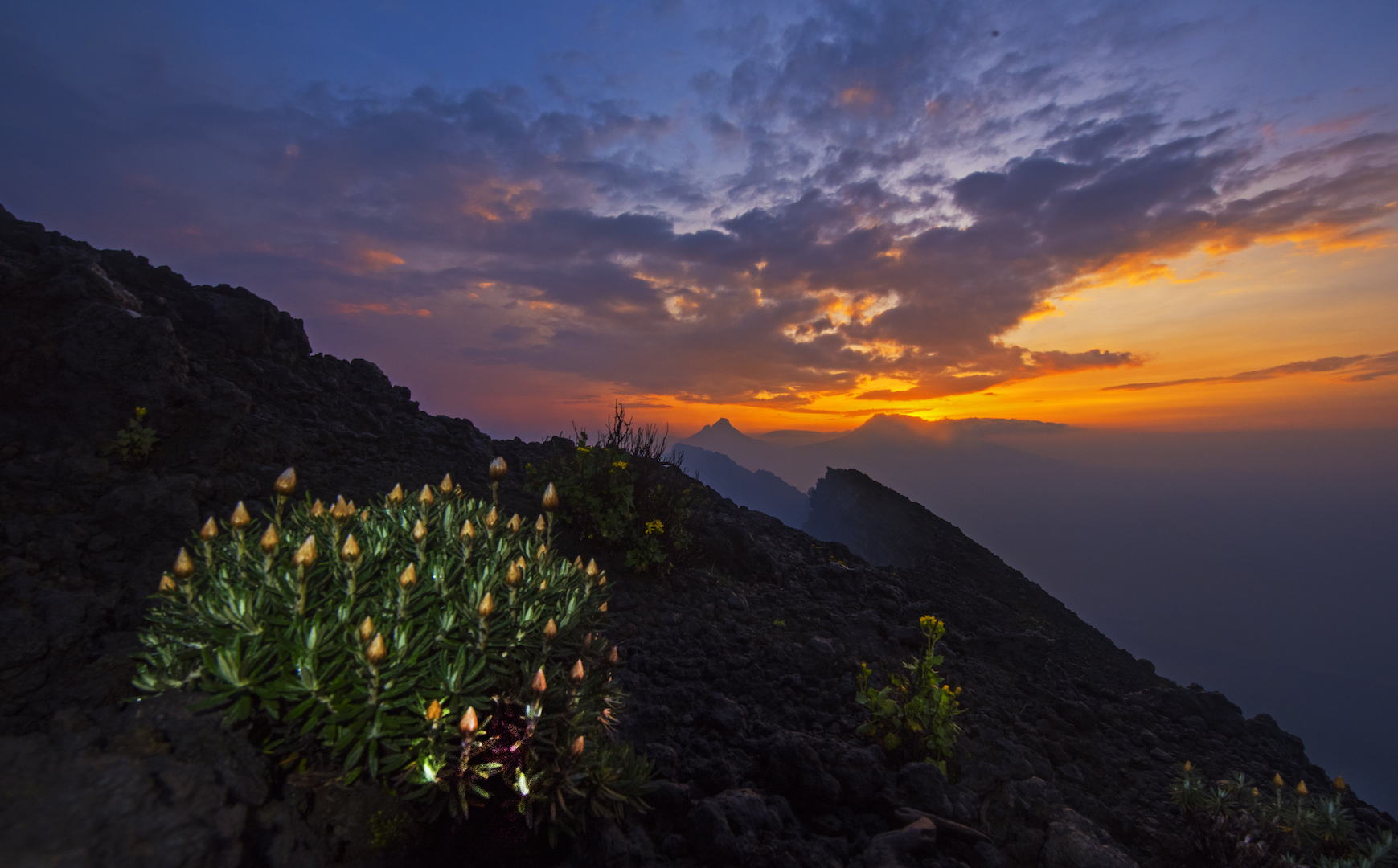 After an incredible night of observing the volcano, I catch the first rays of the morning sun and the flowering plants on the other side of the ridge. It all seems so calm, I can hardly believe that there is simmering lava just around the corner. It appears to be a clear day, but the weather here can be unpredictable. Cold air and heat from the volcano combine to bring regular bursts of rain to the area.

FROM THE FIELD: Atop the ridge, where we camp for the night, we are 600 meters above the lava lake. I can feel the heat it emanates despite the chilly weather. It’s a comfortable heat against the cold mountain air, punctuated by the smell of sulphuric acid. Against the red glow that envelopes the night, I take a picture of myself.