How a gnarly, shabby, knotty old oak provides food and protection to a huge host of creatures 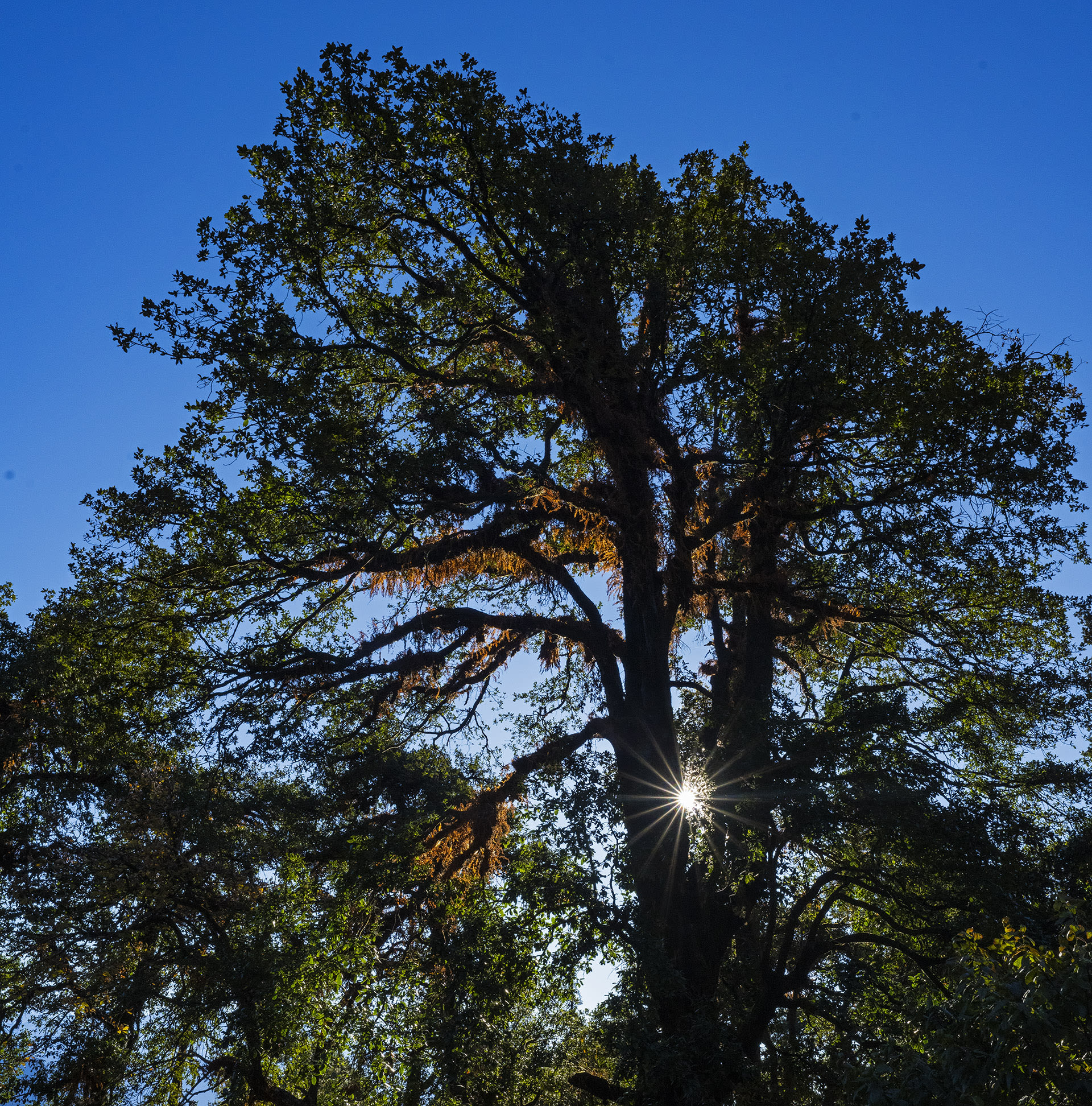 In 2015, when photographer Dhritiman Mukherjee was trekking through Uttarakhand’s Kedarnath Wildlife Sanctuary he came across a moru oak (Quercus dilatata) that stood out against the rest of the trees. Compared to the statuesque, symmetrical chir pine, the towering oak spread its crooked arms at odd angles. Its fat trunk, crowded with mosses, ferns, and epiphytes, looked shabby. It was noisier than other trees, too. He heard a woodpecker’s steady drumming backed by a chorus of whistles, whirs, and high-pitched “kwiks”. It was perhaps over 60 feet tall, but also just as wide, creating a circle of shade beneath it. Unmistakable claw marks of the Asiatic black bear were etched on the bark. This was no ordinary oak. Every inch of it was bustling with life.

In 2020, when Mukherjee returned to the sanctuary, he went in search of it again. Kedarnath Wildlife Sanctuary is a mosaic of rolling alpine meadows and patches of dense broadleaf forests. At the edge of one such patch, just before a dark forest gave way to open meadows, the oak stood tall. This time, the tree was even busier. Trails of oozing sticky-sweet sap lined its branches. The liquid treat seemed to attract a jungle party. “I spotted four species of woodpeckers, nuthatches, yuhinas, and sibias within minutes,” he says. Fallen leaves and twigs at the base probably dropped by the activity of langurs, squirrels and civets on the branches were scattered on the floor. “Deep in my heart I wished to see the nocturnal Himalayan palm civet. It had eluded me for years. I spoke to a few locals and they confirmed that there had been some civet activity around the tree,” he says. At 9 pm, in pitch dark, Mukherjee returned to the spot and trained his torch on the upper reaches of the tree. A pair of glinting eyes stared back at him — a Himalayan palm civet watched him with caution. Then it turned, stuck its tongue out and licked sap off the bark. 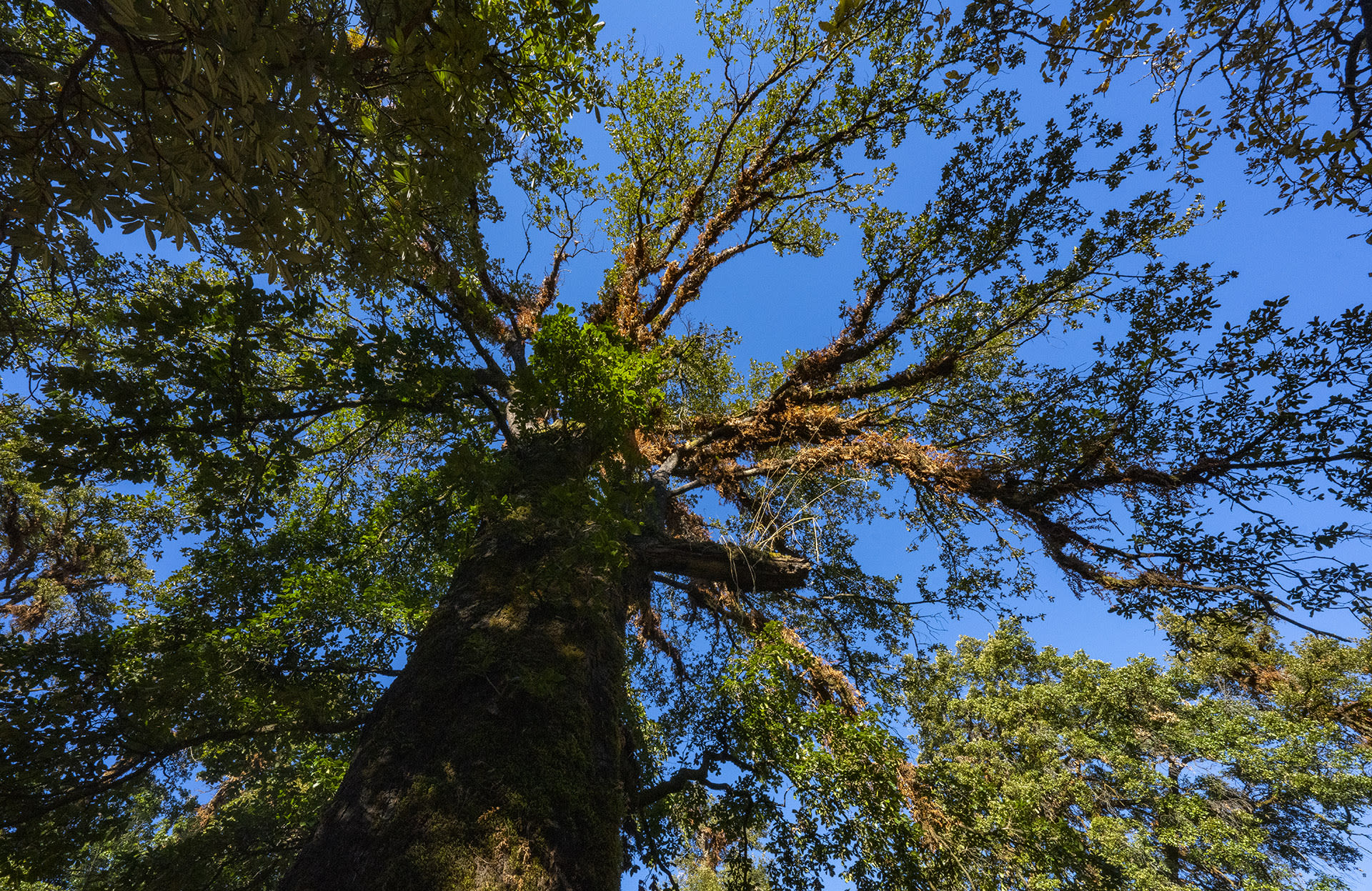 Trees are sanctuaries, and the gargantuan moru oak that lives for over a hundred years, even more so. Its rugged bark is a great surface for lichens, ferns, and mosses and an ideal breeding ground for insects. Birds soon follow to feed on them. Thanks to the buffet of bugs, many woodpeckers and barbets choose to nest here, digging deep holes. Once these cavities are abandoned, new tenants — owls, tits, snakes, civets, squirrels — move in. “Now imagine a large oak tree that has lived for over a hundred years and has nurtured old, old cavities. It is one of the reasons why it attracts so many birds and mammals,” says ecologist Ghazhala Shahabuddin. An old oak is prime real estate.

Lichens, mosses, and ferns also provide raw material for birds’ nests. “I have seen tits, nuthatches, flycatchers carry softs bits of moss and ferns to line their nests,” says Shahabuddin. A moru oak’s acorns are coveted treats. During the winter, when the sanctuary is covered in snow and food is scarce, its acorns sustain several birds, and mammals. When it snows musk deer, serow, monals, and koklas pheasants take shelter under it. “An oak is populated from top to bottom with multiple species. At that altitude, this tree is the most life-giving tree of all,” says GS Rawat, high-altitude ecologist and former director, Wildlife Institute of India. “However, the moru oak has been studied little and there is no record of it releasing this sweet sap. This is a first for me,” he says. 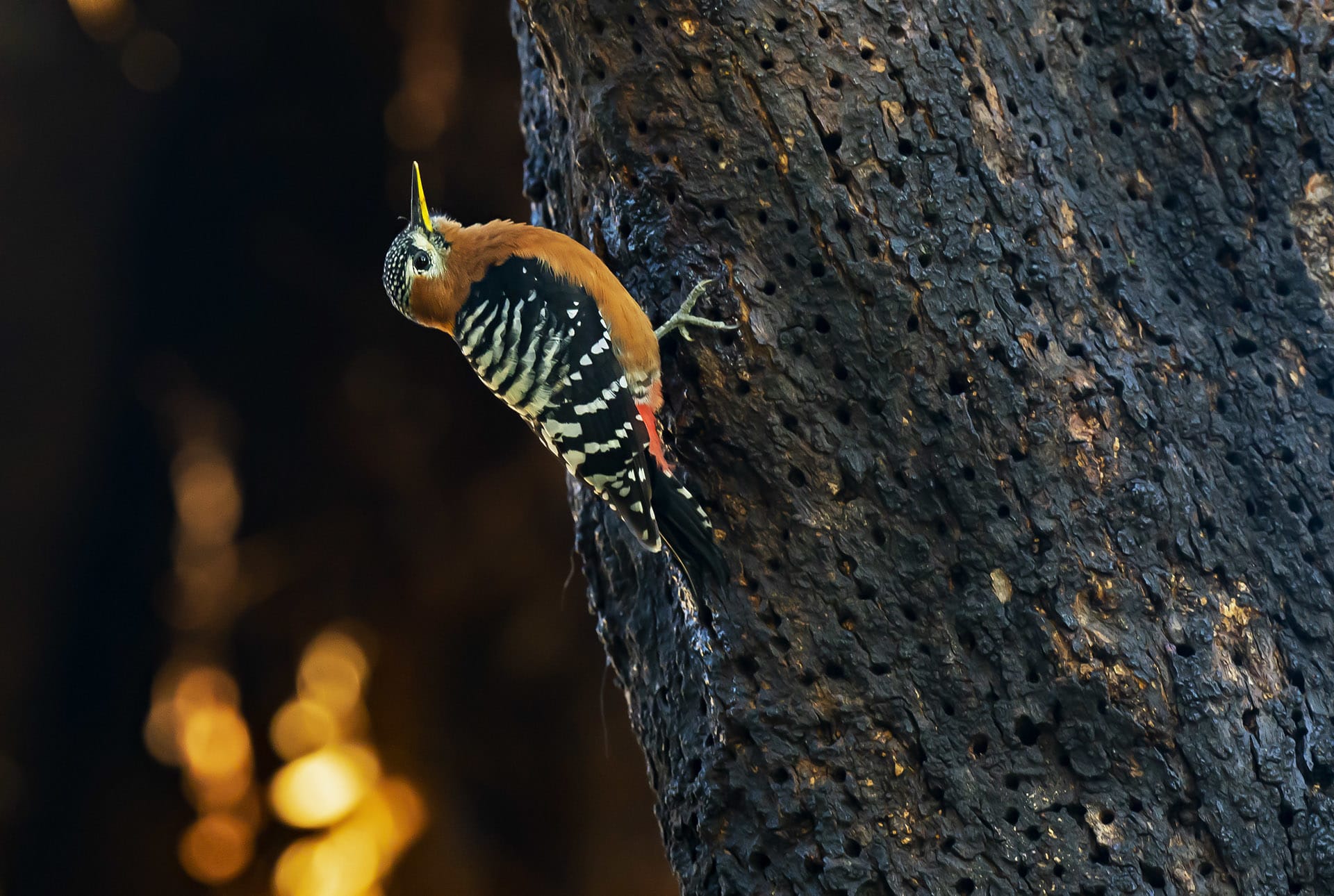 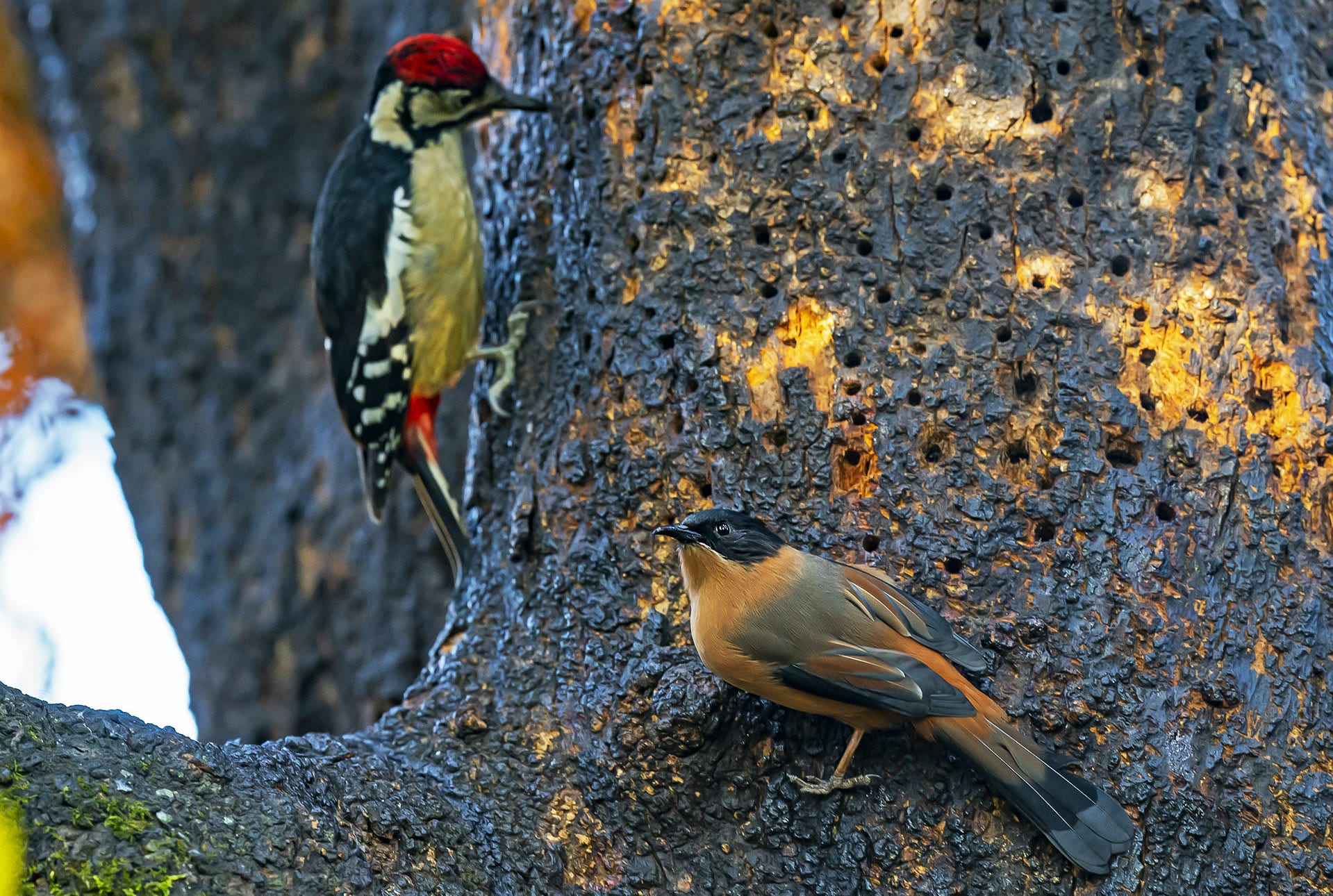 (Left) One of the first birds that caught Mukherjee’s eye was the rufous-bellied woodpecker (Dendrocopos hyperythrus), the only known “sap-sucking” woodpecker in India. The sapsucker spends long hours drilling neat rows of holes along a tree’s bark to release a sugary sap. Its tongue has a brushy tip that helps absorb the liquid. But drilling these sap wells is no small feat — researchers have observed trees that have been drilled on every inch of its surface, from top to bottom. The relentless hammering requires great perseverance, and a specialised piece of evolutionary anatomy. A woodpecker’s skull is made of sponge-like bones that work like shock absorbers preventing damage to the brain cushioned inside. Its exceptionally long tongue (over 10 cm) wraps around the skull through a cavity, providing extra protection. (Right) The sap of an oak is a special treat, and the rufous-bellied woodpecker’s drilling of holes kicks off a jungle feast. Birds soon crowd around to drink the sap the drilling releases. A rufous sibia (Heterophasia capistrata), a bird that prefers undisturbed oak forests, shows up. A solitary Himalayan woodpecker (Dendrocopos himalayensis) sticks its sharp beak into one of the holes in search of sap and insects. But its sharp beak does more than just feast on sap and insects. “On several occasions I have observed the Himalayan woodpecker firmly stick a nut in a fork of a branch and use its bill as a chisel to break it open” says ornithologist Raman Kumar.

The scaly-bellied woodpecker (Picus squamatus) is one of the larger woodpeckers found at these elevations. Its specialised feet — with two pincer-like claws in the front, and two behind — dig into the bark for a firm grip. Its stiff tail feathers, that rest against the oak’s trunk, provide extra support. With this apparatus the scaly-bellied woodpecker, like most woodpecker species, scale challenging, vertical trees while continuing to tap and drill.

The brown-fronted woodpecker (Dendrocoptes auriceps) is one of the smaller members of the pack. With prized trees like the moru oak, different species of woodpeckers must learn to share the spoils. Researchers have found that in places where multiple species of woodpeckers coexist, they amicably split their food resources — with different species will forage at different heights on different parts of the tree. A tree that attracts woodpeckers, is bound to have several cavities. “The cavity creating ability of woodpeckers is highly underrated,” says Kumar. They create two kinds of cavities — shallow ones for roosting, and deep ones with enlarged vertical chambers for nesting that can usually accommodate parent woodpeckers and up to four young ones. “There’s huge competition for these cavities from not just other birds such as owls, mynas, hornbills or tits that don’t build their own nests, but also mammals such as bats, palm civets, squirrels, and reptiles such as snakes and monitor lizards,” says Kumar.

Red giant gliding squirrels (Petaurista peturista) are “secondary cavity nesters” — they either nest in natural tree hollows or holes made by birds such as woodpeckers. They are nocturnal and step out to feed after dark. But while feeding on leaves of moru oak they have a peculiar preference. They “window feed” or carefully eat only the centre of leaves, which has less toxins compared to the edges, creating neat, squarish window-like holes.

An excellent tree climber, the nocturnal Himalayan palm civet (Paguma larvata) curls up like a ball of fur in the gaps of a tree during the day, and only steps out at night. The oak, with plenty of cavities, is one of its favourite hideouts. (Above) It appears to be licking the sap released from the oak. 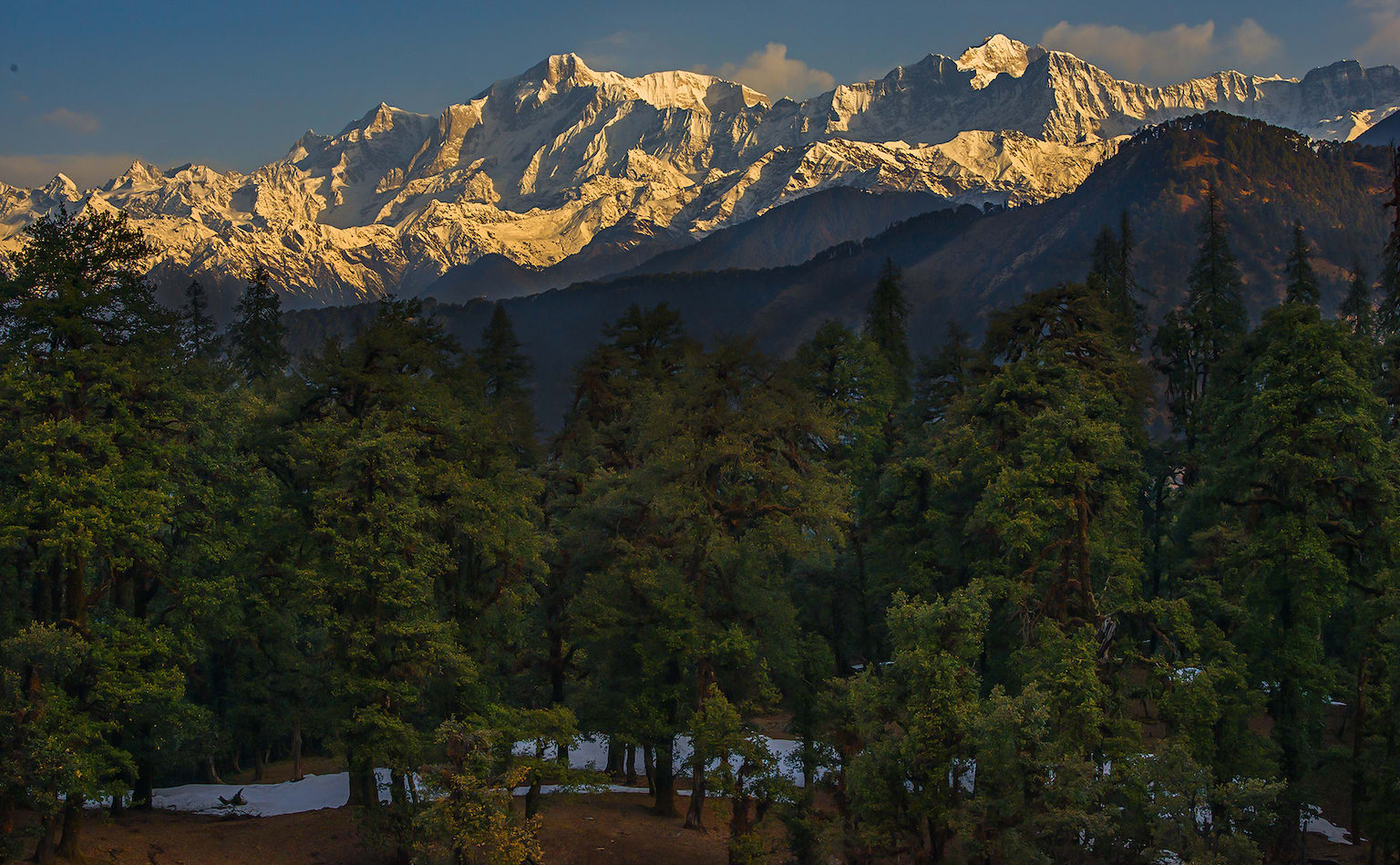 An oak forest is a rich ecosystem. Unfortunately, these forests are depleting rapidly. Oak wood is an excellent source of fuel, and logging is on the rise. Growing tourism needs more land — oak forests outside the protected area are hacked to set up tourist camps and hotels. “In and around Kedarnath Wildlife Sanctuary alone, wherever there is heavy tourism or heavy livestock grazing, annually four to five hectares of oak forests are converted into open grazing lands or are opened up for development for tourism,” says Rawat. “They protect us, tell stories about our past, and remind us that we were only born yesterday and must care of everything that has existed long before us.”