Not only do these cephalopods breed only once in their lifetime, they die soon after. With an optic gland activating the breeding mode in females, and the male placing a rock between the pair while mating, this sea creature displays some unusual behaviours while procreating

Octopuses are classic examples of wild animals that are stranger than fictional ones. They are highly intelligent and voracious marine predators capable of shape-shifting and camouflage. From tales of legendary sea monsters like the Kraken, to the more recent depiction of the octopus-headed Davy Jones from the Pirates of the Caribbean, octopuses have inspired and captivated the human imagination for centuries.

Octopuses are cephalopods (which references the way the head connects to the foot) like the squid, cuttlefish, and nautilus and have tentacle-like appendages around their head. Their head (technically called the mantle cavity) is a vault containing all of its vital organs including its heart, brain, gills and gonads. Octopuses have evolved from the same ancestors as gastropods (stomach footed creatures) like snails and slugs, making them cousins of sorts. While scientists are not entirely sure why the octopus evolved without a shell, one explanation could be that life outside the shell was one with more flexibility, access, and opportunities. This could also explain the evolution of heightened cognitive abilities in these softbodied molluscs; to help them outsmart and survive the cutthroat world of the ocean.

Octopuses function on three hearts, the equivalent of nine brains, and blue-coloured blood (copper-rich blood called haemocyanin). If this seems peculiar, how they procreate and the mysterious circumstances and events that surround their coupling are even more intriguing. Octopuses are “semelparous” in their life history. They breed only once in their lifetime, soon after which they die. While this phenomenon of hormone-programmed death soon after producing offspring seems unusual and heartbreaking to us humans, could this be an evolutionary strategy to protect young octopuses from their parents, who are known to have cannibalistic tendencies? Or is it a way to keep octopus populations in check? These are scientific mysteries that still need hard answers.

Over the past few years, India has seen a surge in the demand for octopus meat, especially in the export markets. As octopus fisheries prepares to scale up, covering larger areas, targeting juveniles or egg-bearing females and aiming for higher yields, incorporating what we understand of the ecology of these incredible animals will not only help protect these species but also our deep relationship with them. 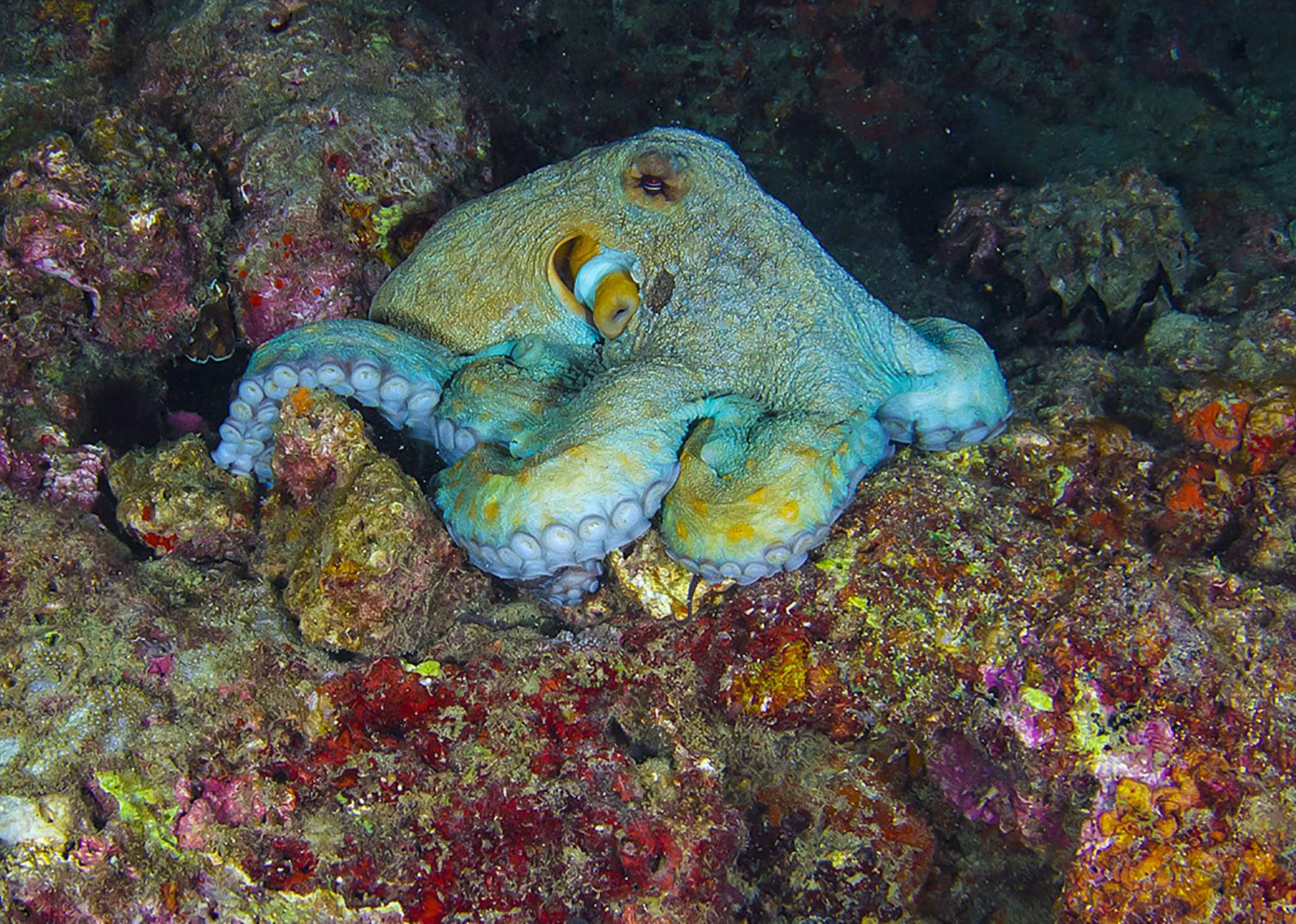 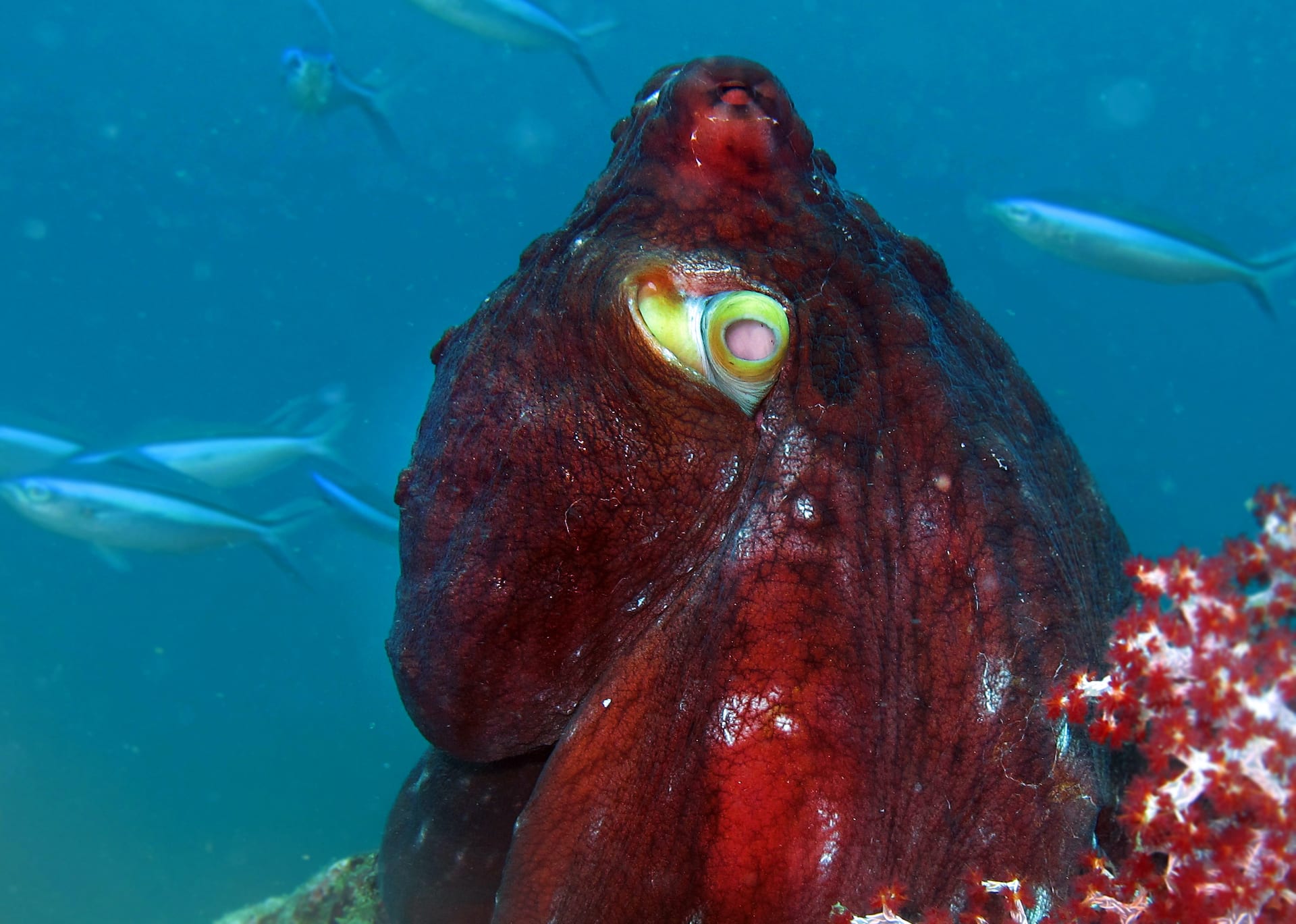 The day octopus (Octopus cyanea) is commonly found in the shallows of the Indo-Pacific oceans. Adults of this species are fairly large, making them easy to spot underwater. They are shy animals and slip into crevices in the reef when disturbed. On most days, they go out to hunt on the reef, or when curiosity gets the better of them, they can be seen comfortably propped like a rock observing the happenings around them. Day octopuses when calm take on a deep burgundy colour but can turn completely white when alarmed or wanting to appear threatening. There are several shades and textures in between they can adorn for camouflage depending on the surfaces they are crawling on or underwater props they need to masquerade as. Photos: Dhritiman Mukherjee (left), Vardhan Patankar (right) Cover photo: Umeed Mistry

Day octopuses are typically solitary. It is common to see them fight off competing co-predators like wrasses and goatfish by lashing out their tentacles. With some luck, one might even be able to catch them hunting cooperatively with groupers. They are most social when the breeding season arrives. Day octopuses have a window of a few months during which they breed. Looking for mates takes time and effort and involves being exposed to a greater risk of predation. Yet these octopuses appear to become a lot bolder during this period, spending more time exploring the reef and not shuttling towards their dens as easily. Photo: Vardhan Patankar 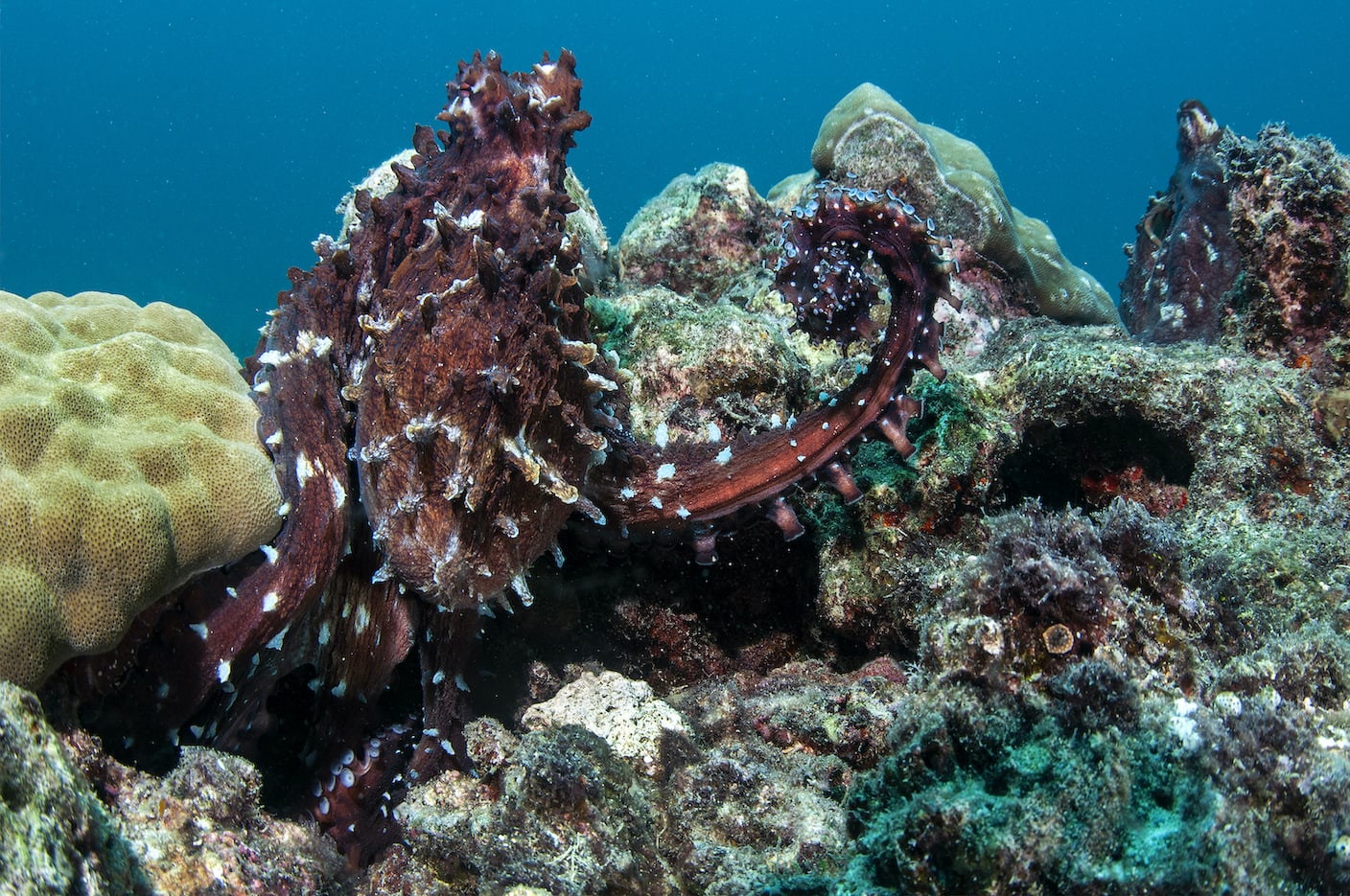 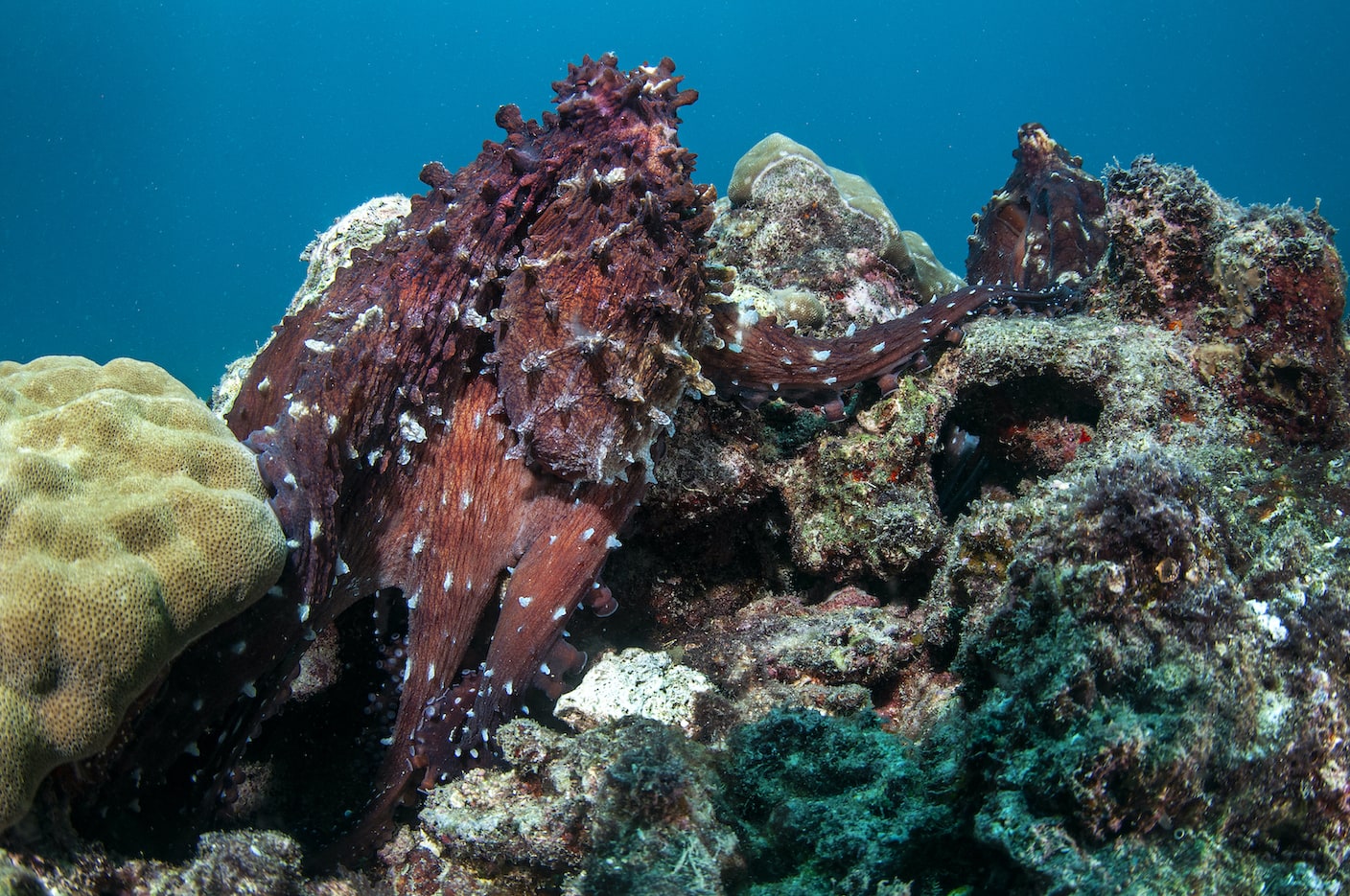 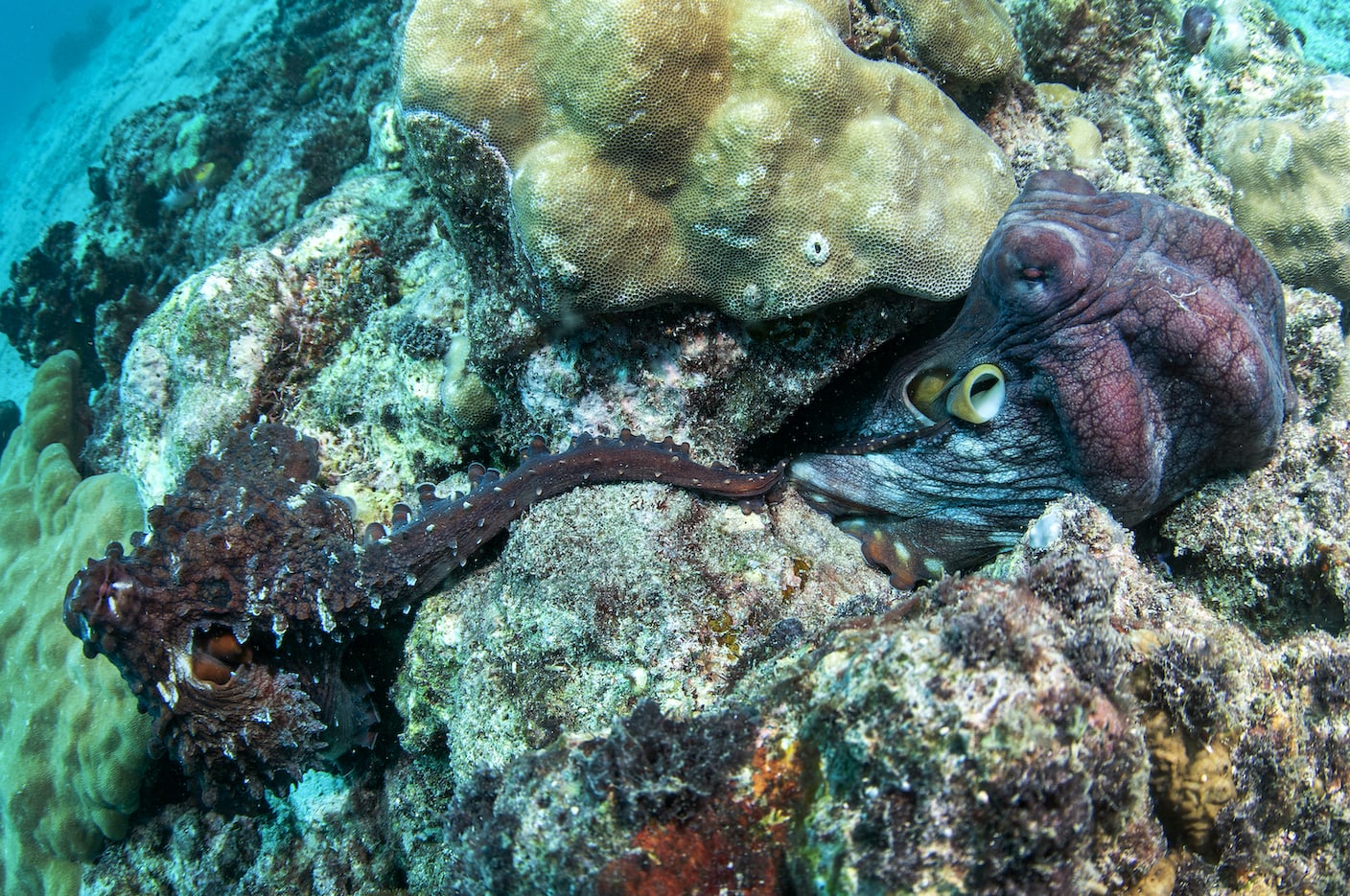 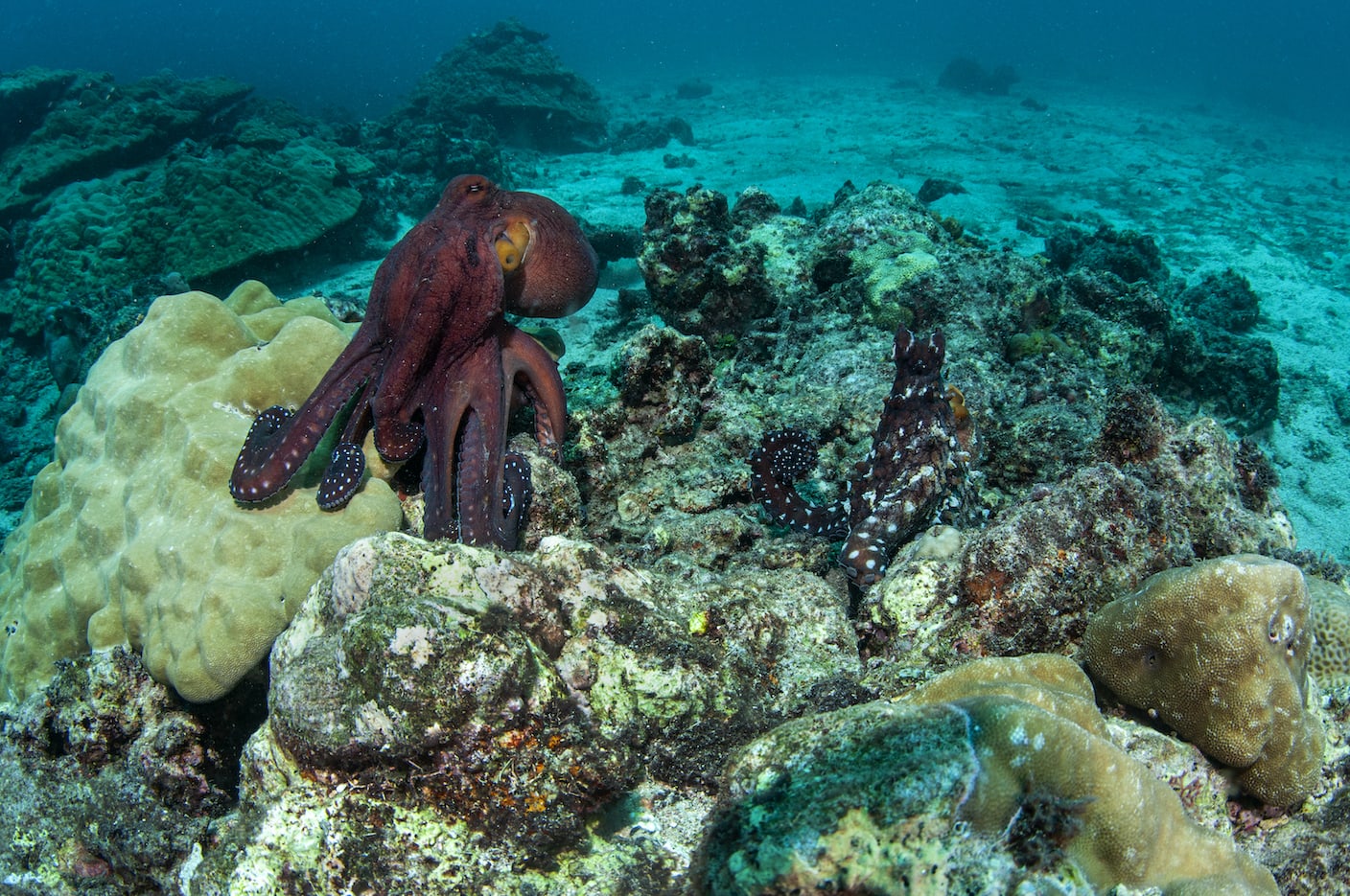 Once a male finds a mate, he must transfer his sperm packets into the female, by inserting his hectocotylus (his third arm modified for mating) through her siphon (a multipurpose organ that also helps in breathing and locomotion). For the male, however, this is the trickiest part. And much more life-threatening than scoping the reef for a partner. For the female, this will be her swansong. Even though both sexes are tuned into “breeding mode” — wanting to mate, to produce offspring, and pass on their genes — there are times when this process can take a lethal turn. Females although feeling amorous are also hungry and can go so far as eating the male after mating. On some occasions they might kill and consume the male before they begin to mate. Males are aware of this risk and always approach females with equal amounts of passion and caution. Even though mounting the female might provide easier access to the female’s siphon, a male might prefer to keep his distance. Sometimes separating himself using the protection of a rock in between as he delivers his sperm packet. Other times choosing to mate from outside the dangers of the female den, lest she traps him and strangles him out of hunger. Photos: Umeed Mistry 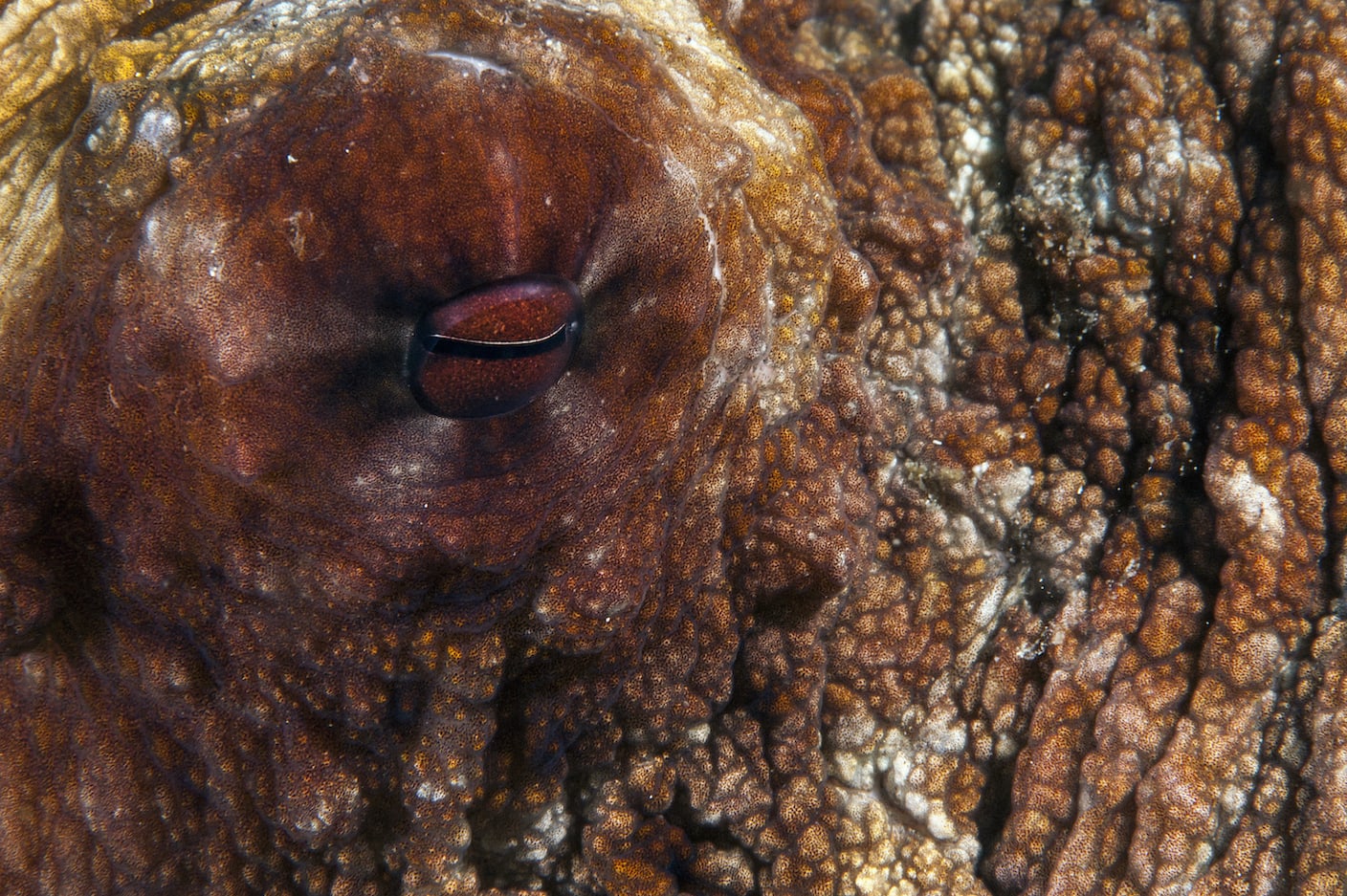 Breeding mode in female octopuses is activated by an optic gland. Positioned close to her eyes, the optic gland functions like the pituitary gland in humans. It helps the female octopus prepare to lay her eggs after a successful session of mating. This could take a few weeks. Once the eggs have laid, there is a period of brooding still to complete before they hatch. Through this time, hormones secreted by the optic gland help the female focus entirely on caring for her clutch of eggs. This means she even quits eating. Starvation and exhaustion while continuing to keep the eggs clean, oxygenated, and safe from predators drastically weakens her strength. By the time the eggs hatch, the optic gland has sent the female octopus further into what scientists call a “self-destruct” mode until she finally dies. Photo: Umeed Mistry

Octopuses play an important ecological role in marine ecosystems; they are also some of the most popular animals to see underwater recreationally. For centuries, however, they have had a crucial cultural role, providing subsistence for fishing communities. The Lakshadweep Islands in India even today see numerous small-scale fishing methods practiced for catching octopuses — from traditional baited traps and pots to simple rods and hooks. Researchers in the Lakshadweep Islands find that the octopus fishery not only provides for peoples’ livelihood, but also plays an important role in bringing the community together. Photos: Vardhan Patankar

is a biologist, educator and the co-founder of Spiders and The Sea, a social enterprise focused on nature education and research.