Swoop, Soar, Screech: Owls on the Prowl Across India

Owls inhabit nearly every kind of landscape in India. Learn to identify some of the 30 different species found in the country

Owls are a fascinating species, with adaptations that seem to bend the rules of physics and biology. Found on every continent except Antarctica, there are more than 200 species of owls in the world. India is home to over 30 varieties — ranging from small to large, sing-song to screechy. Though many owls prefer the cover of dark to fly, hunt, and go about their business, not all species are nocturnal. Some prefer hunting during the day, others are crepuscular, i.e. most active at dusk and dawn.

Owls inhabit nearly every kind of landscape in India — forests, grasslands, barren mountains, marshy riversides, islands, and even crowded cities. They repurpose spaces. Each habitat harbours one or more species of owl. Learning to tell different owl species apart can be challenging for beginners, but here are few tips that will help you on your owl identification journey.

“Each bird sits in a particular posture,” says photographer Dhritiman Mukherjee, who has tracked and photographed different species of owls across India. Owls typically have an upright posture and a flat, disc-shaped face with forward-facing eyes. Their binocular vision narrows their field of view, but to compensate, they can swivel their heads 270 degrees — a biological adaptation that enables them to see in many directions.

While an owl’s physical appearance and calls can help identify a species, wildlife biologist Shashank Dalvi suggests keenly observing a bird’s habitat as the starting point to owl identification.

The term “owlet” could refer to a baby owl, but is also used to classify small species of owls, like this pair of spotted owlets (Athene brama). These tiny birds measure around 20 cm and feature white and brown spots. They are found almost everywhere in rural India, often seen in cities, inhabiting nooks and crannies of buildings. Look for them around twilight. 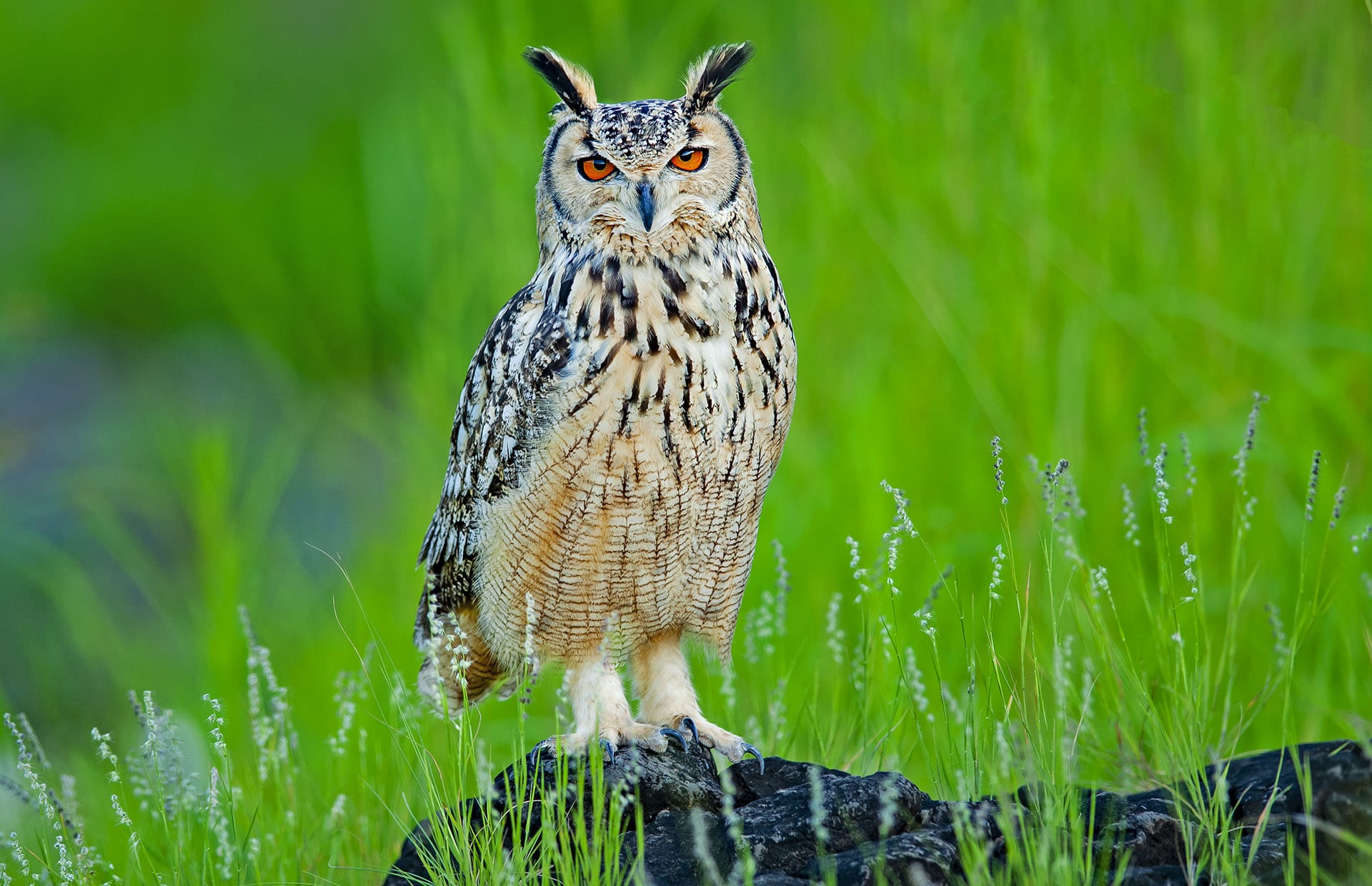 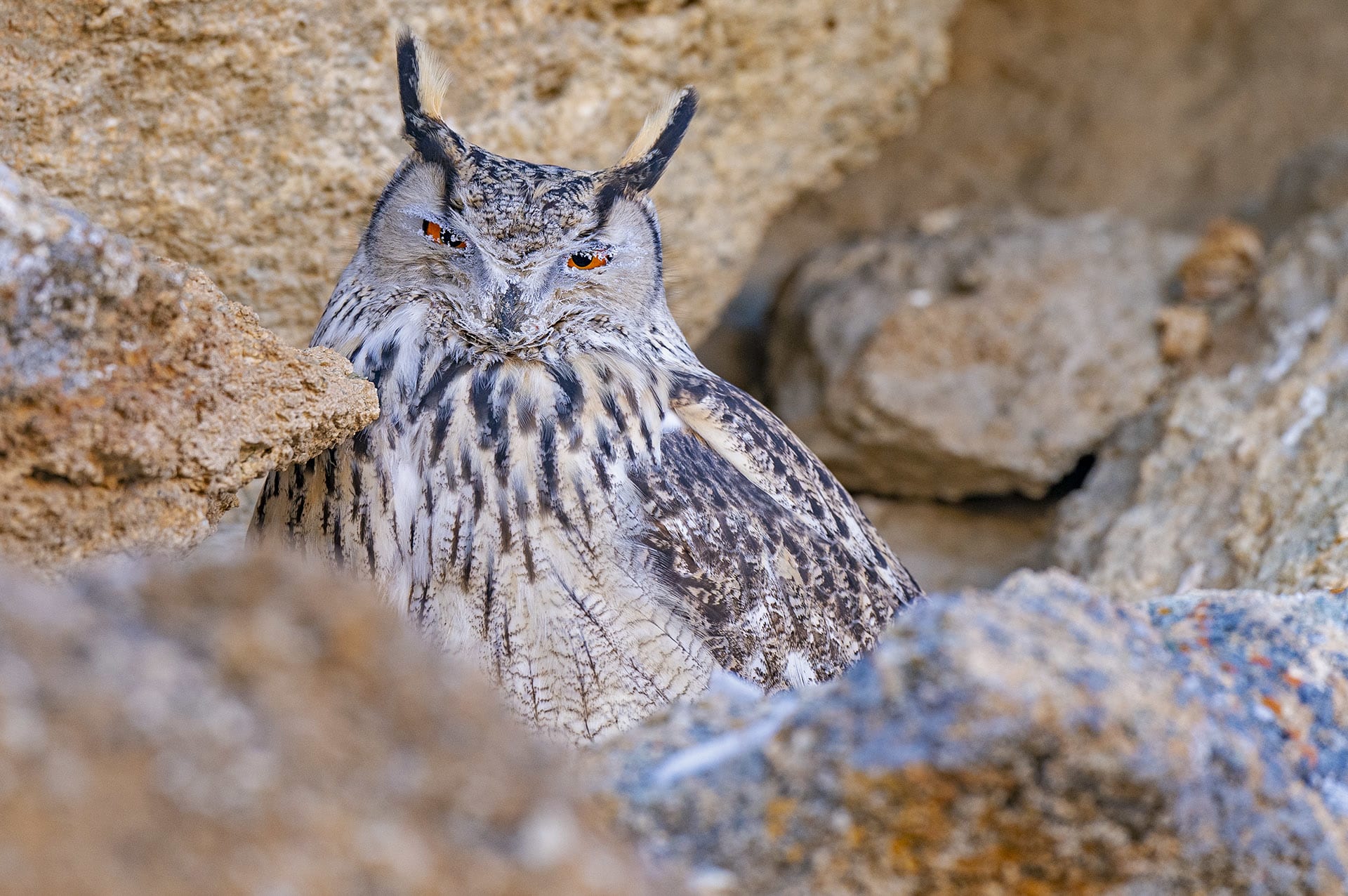 Eagle-owls are large with a tremendous wingspan, sometimes measuring nearly six feet across. They also sport prominent ear tufts, but their most recognisable feature is their eyes, ranging from a fiery orange to a dark red. Found across a range of wooded habitats, these birds are more common in rocky, barren landscapes. The Indian eagle-owl (Bubo bengalensis) (top) is also called the rock eagle-owl. “You won’t find them in cold, high-altitude areas. They prefer warm regions and scrub forests where they perch at the base of a bush,” says Shashank Dalvi. The Eurasian eagle-owl (Bubo bubo) (above) on the other hand is always found in cold deserts like Ladakh. They’re brilliant at camouflage, and blend artfully into the rocky landscape.

Tawny owls (Strix aluco) have a wide distribution across Europe and all the way to the Western Himalaya. In India, they are only seen in Kashmir (where this image was taken) and parts of Himachal. While a majority of owl species have yellow or orange eyes, the tawny owl has distinctly dark peepers and a characteristic rounded head. 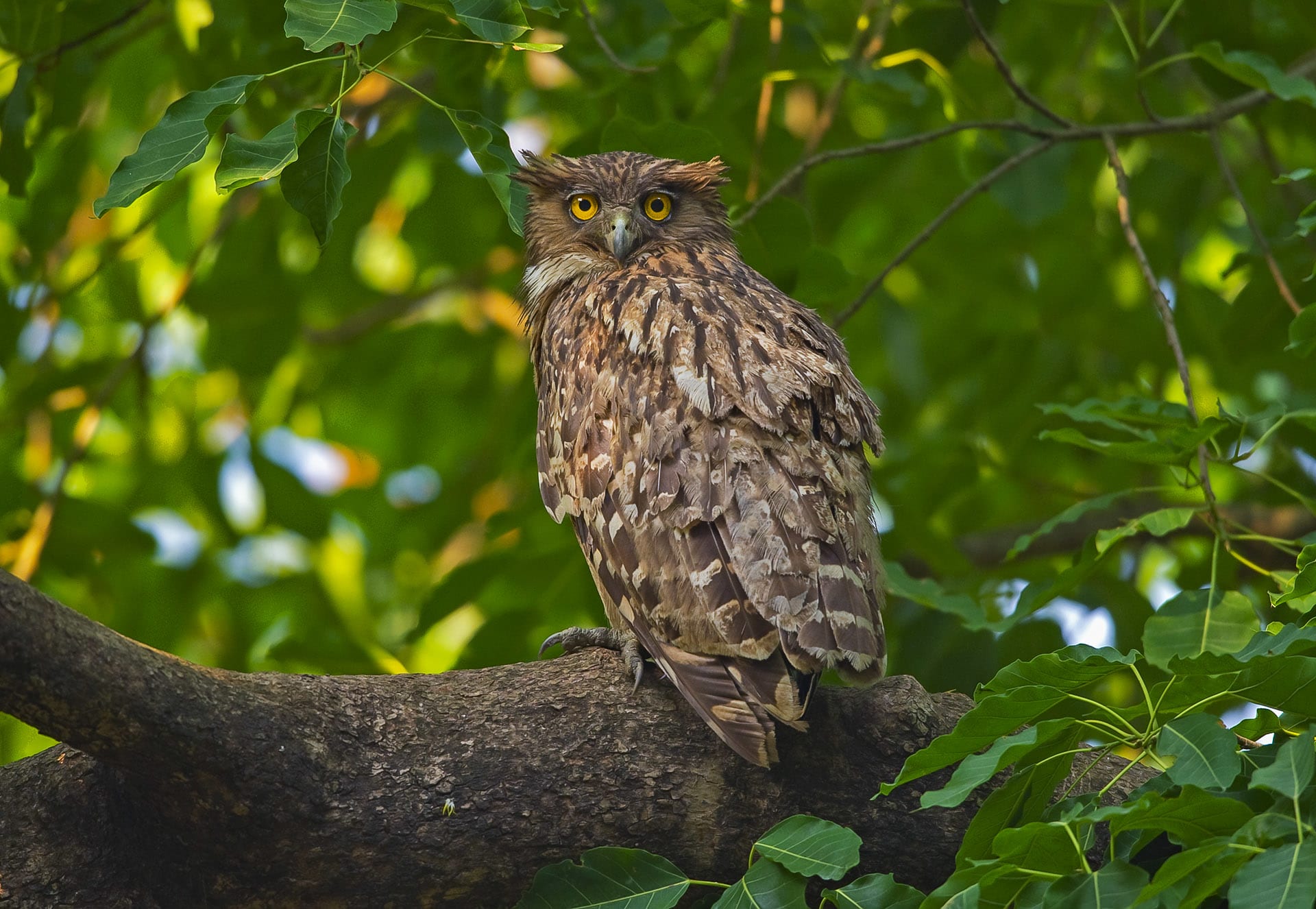 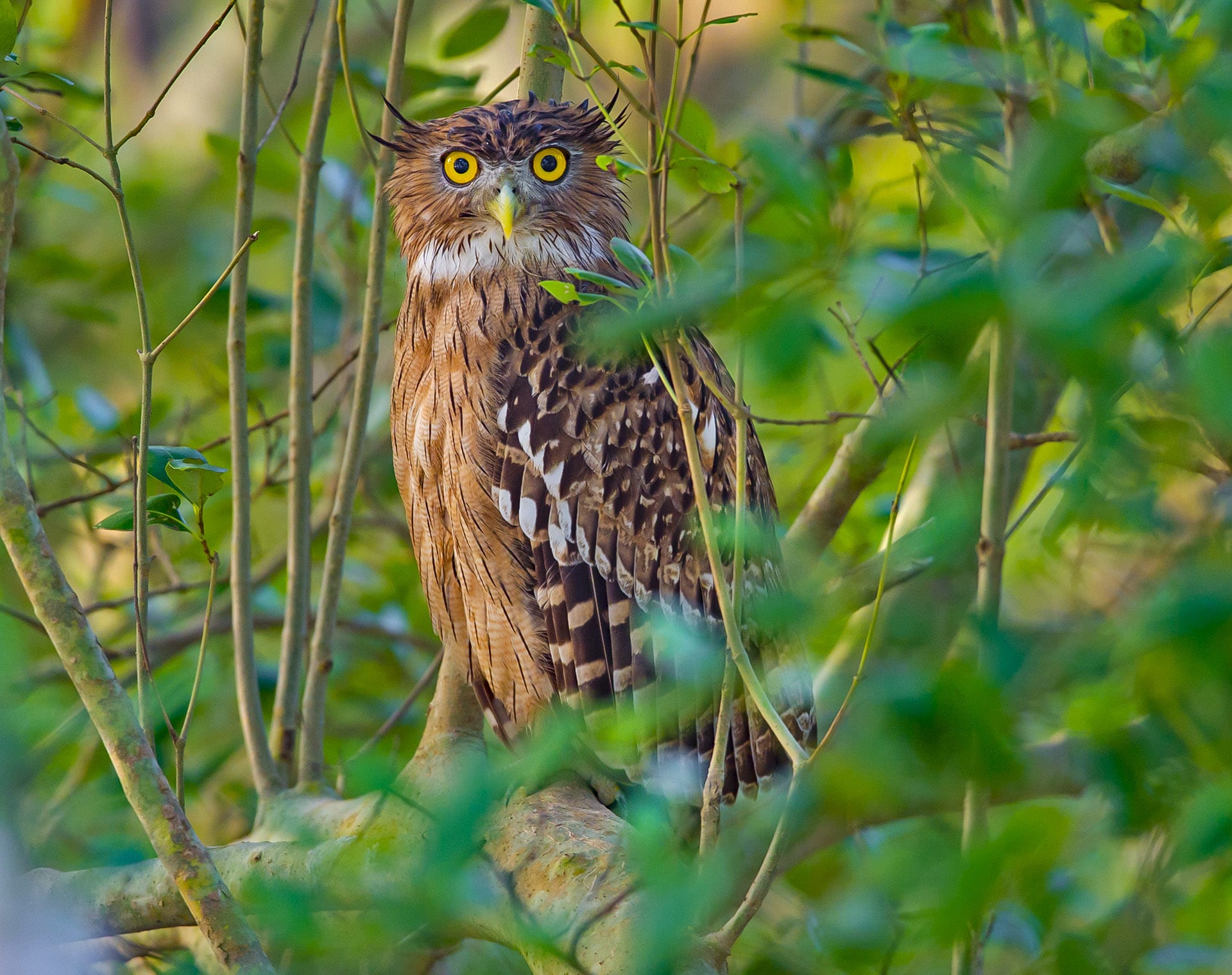 Fish-owls are a large species always found near waterbodies. They prefer a diet of fish, and will sit at a vantage point keenly observing shallow waters for prey like fish and amphibians. Both the brown fish-owl (Ketupa zeylonensis) (top) and the buffy fish-owl (Ketupa ketupu) (above) have streaked brown-black feathers, a pale breast, tufts on their ears, and haunting yellow eyes. The key difference lies in their distribution. “Within Indian limits, the range of the buffy fish-owl is restricted only to the mangroves of the Sundarbans, while the brown fish-owl is more widespread, found everywhere from the south to the Northeast,” says Dalvi.

Scops owls are small birds that are masters of camouflage. Their colouring, of brown, black, or grey tinged feathers, tends to vary with the area they inhabit. They blend easily into the bark of trees, dark hollows, and tree cavities, where they like to roost. The bodies of both the collared scops owl (Otus lettia) (top) and the Indian scops owl (Otus bakkamoena) (above) closely resemble a tree trunk. “Collared and Indian scops owls look and even sound similar to each other, but the collared scops owl is found in the Himalayas and the Northeast, while the Indian scops owl is distributed across peninsular India,” says Dalvi. 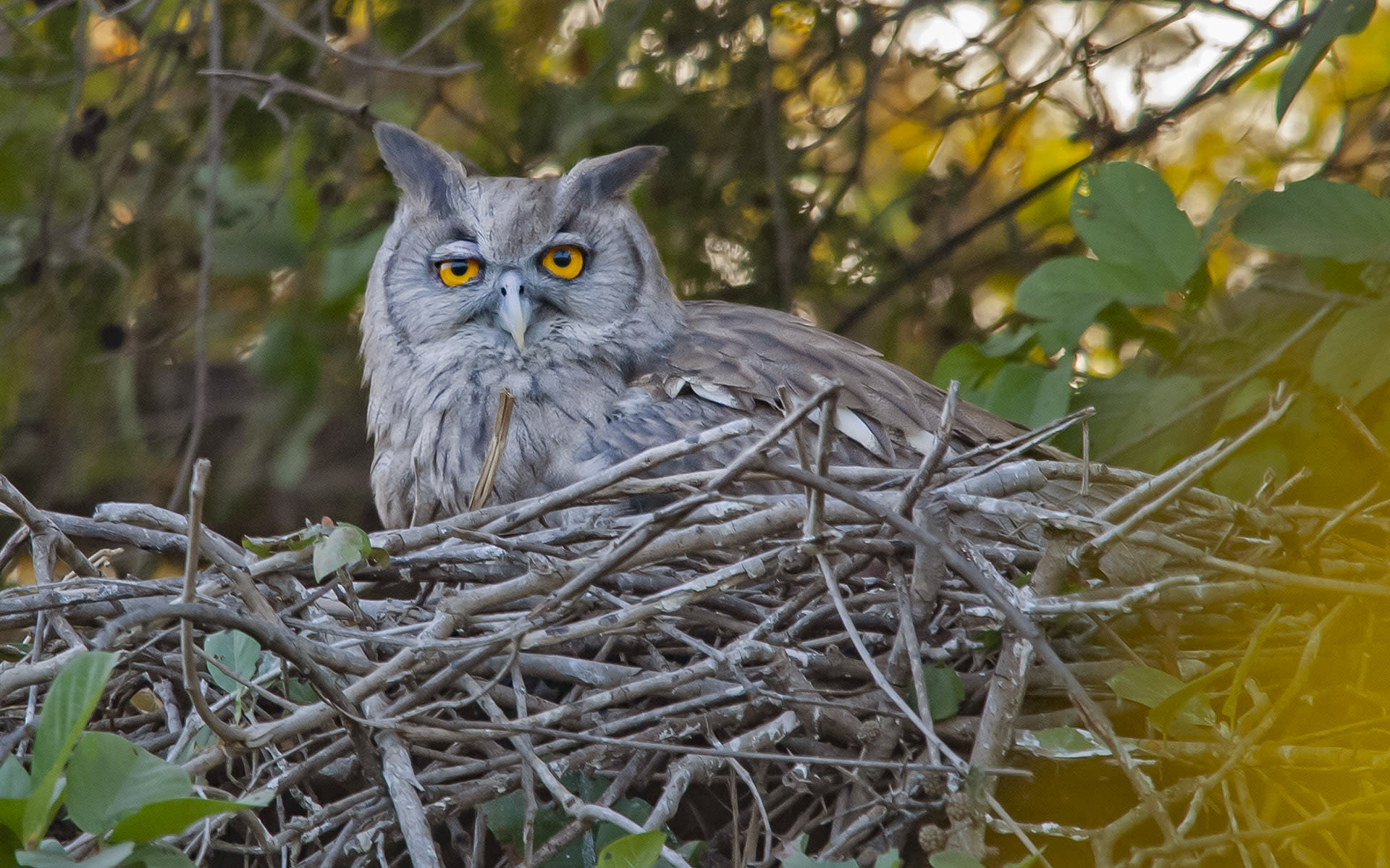 While smaller owls prefer to roost in tree hollows, larger species, like this dusky eagle-owl (Bubo coromandus) like to perch on tree branches. Their pointy ear tufts give them a distinct appearance, making them fairly easy to recognise. They like to inhabit wide, open areas, preferably near water, so “you may see them in the grasslands of Kaziranga or near a canal in Haryana,” says Dalvi. The best way to recognise them is by their call, he suggests: “Tak-tak-trrr — like a ping pong ball on a table, but much louder.”

Most owls are very vocal, and once you know their call, identifying them is fairly easy. Jim Corbett described the call of the spot-bellied eagle-owl (Bubo nipalensis) as the “call of a banshee” for the eerie shriek it emits, inspiring tall tales in local folklore. In the silence of the night, their calls pierce the forest like an arrow. With heart-shaped spots on their bodies and prominent yellow beaks, these large owls are handsome birds whether they are juveniles (above) or adults. 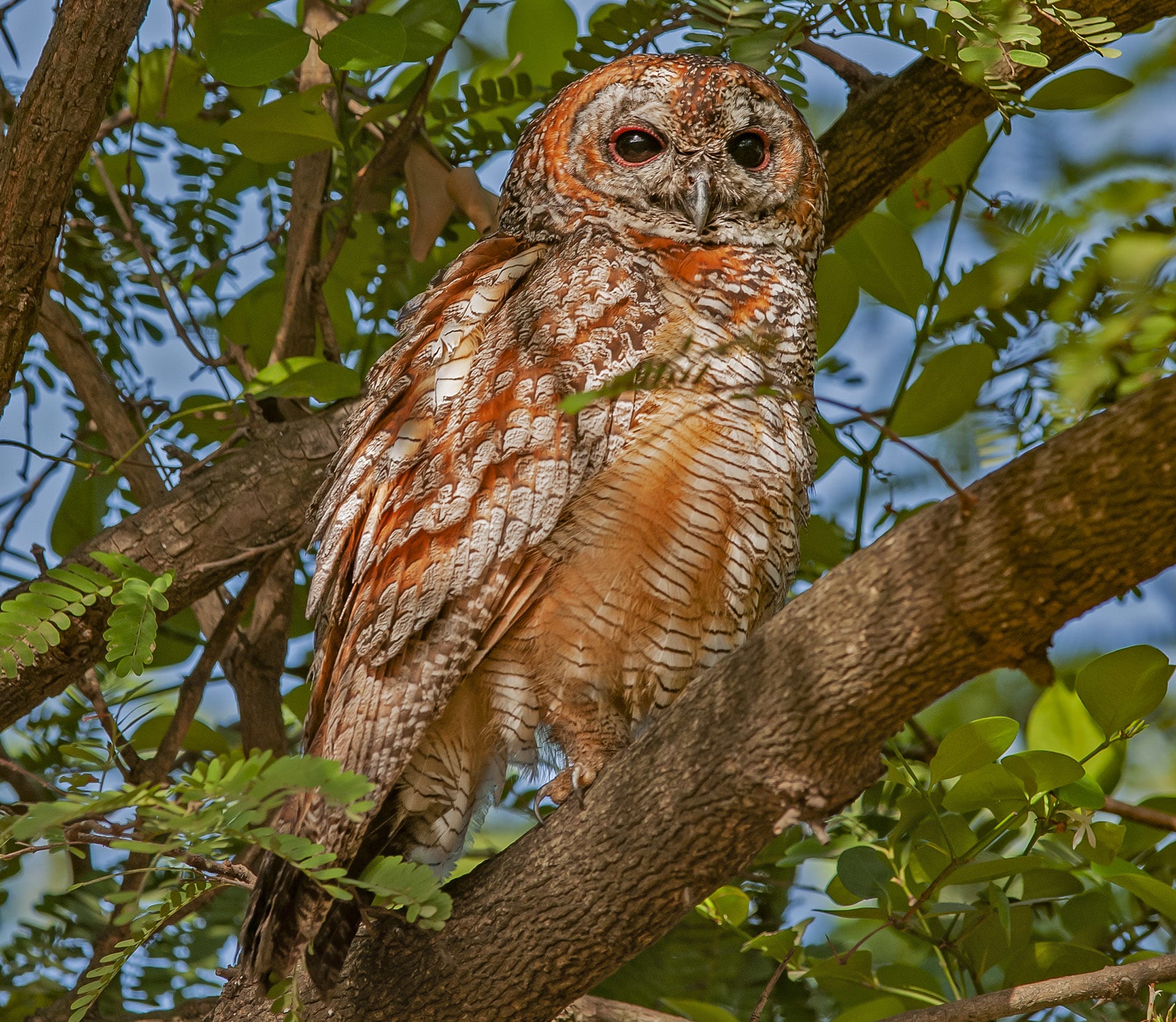 During the day, most nocturnal and crepuscular owls will often roost at a specific spot. In large national parks, forest guides and locals will often know the exact location of a roost, and can point out birds like this mottled wood owl (Strix ocellata), photographed in Gir National Park. They are also seen in open woodlands, like Kanha and Bandhavgarh in Madhya Pradesh. These large owls are well camouflaged against trees, but can be recognised by their loud, distinct hoot. Mottled wood owls are adept hunters, and deftly make a meal of small mammals like rodents and hares.

Hume’s hawk-owl (Ninox obscura) is an uncommon species confined only to the Andaman Islands where it is endemic. “Every possible habitat of the Andamans is occupied by them,” says Dalvi. These medium-sized owls with dark brown feathers and golden eyes are very vocal, emitting a distinctly sing-song whoo-oo whoo-oo call.

Sri Lanka bay owls (Phodilus assimilis) are endemic to the island nation, and to India’s Western Ghats. “Within India, you’ll find them all the way from Goa to the southernmost tip,” says Dalvi. “They are strictly nocturnal birds.” They only emerge and emit their fluty call once it’s pitch dark. Many owls stay still when threatened and these owls tighten their bodies to disguise as a branch, making them very difficult to spot. 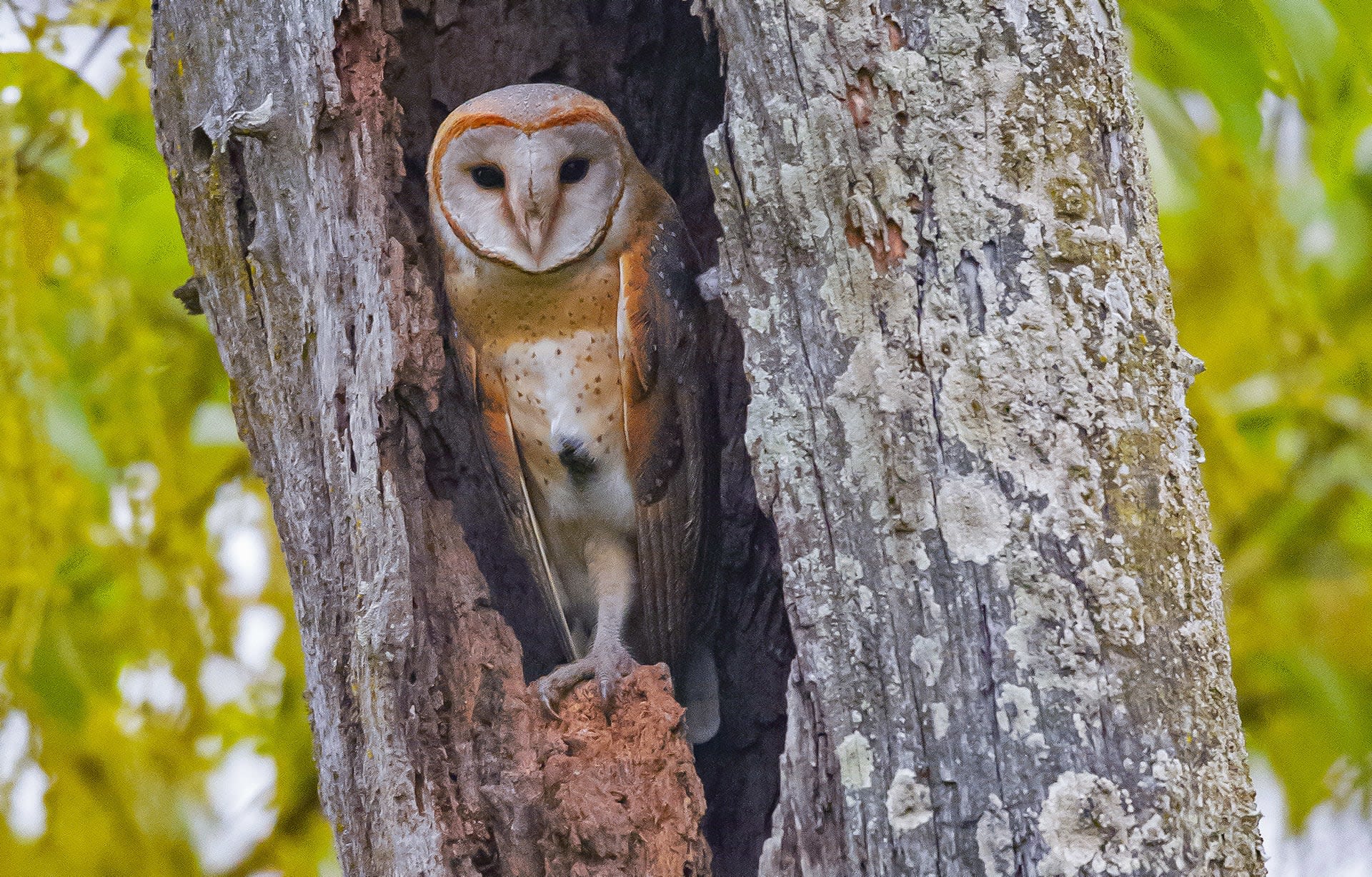 Though the barn owl’s (Tyto alba) flight is virtually soundless, it is a noisy bird. “Barn owls are one of the most cosmopolitan birds,” says Dalvi. They’re commonly seen in crowded, bustling cities like Mumbai, where they contribute efficiently to pest control. Though the birds are silent in flight, they’re extremely vocal, and you can hear their hissing and screeching for long distances even within cities. “They often live in large families with five to six chicks, and can make quite a racket,” says Dalvi. 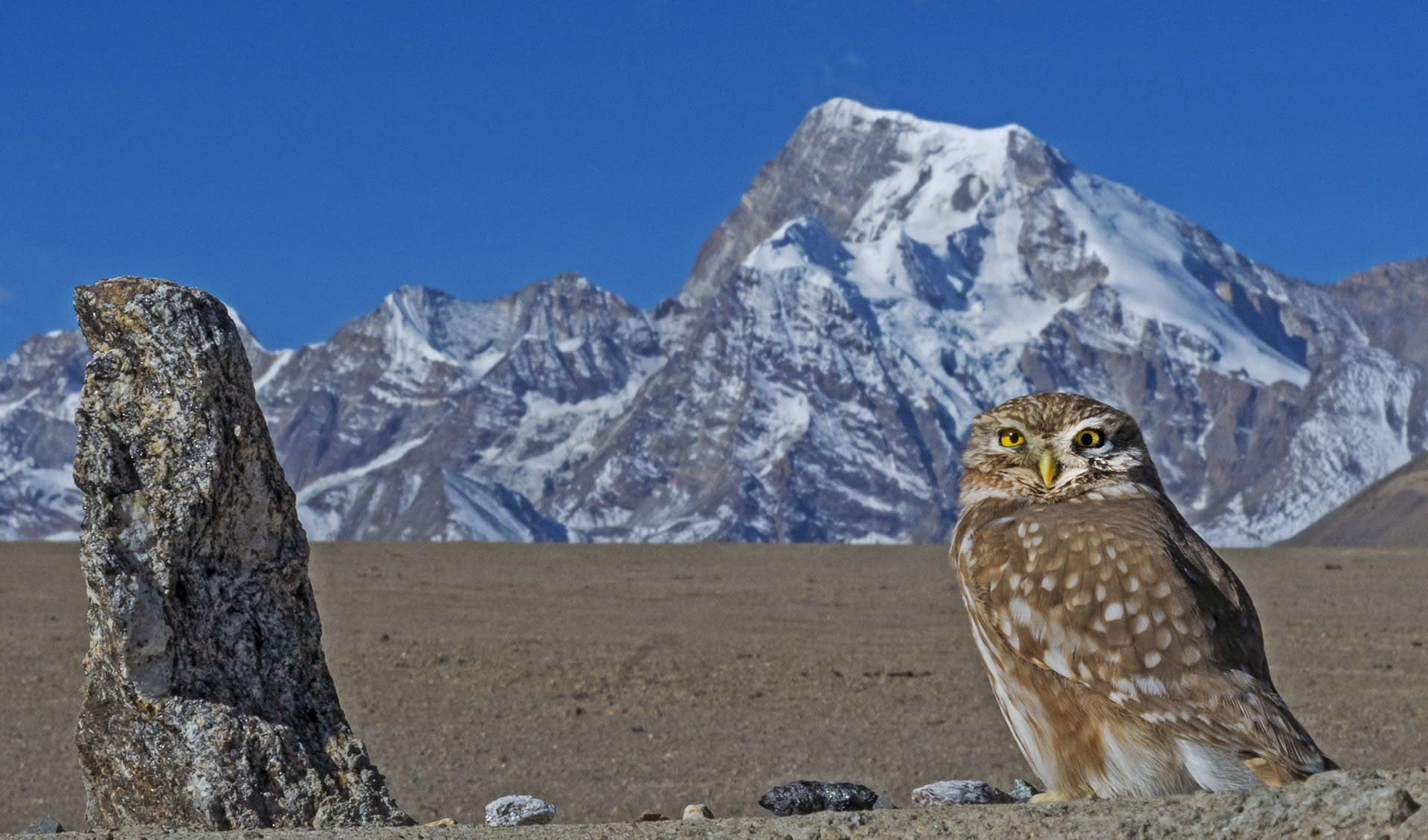 Within India, the little owl (Athene noctua) is found in the trans-Himalayas, on rocky outcrops within open areas. This small, diurnal bird, pictured here in Sikkim, likes worms and beetles, and is often seen on the ground.